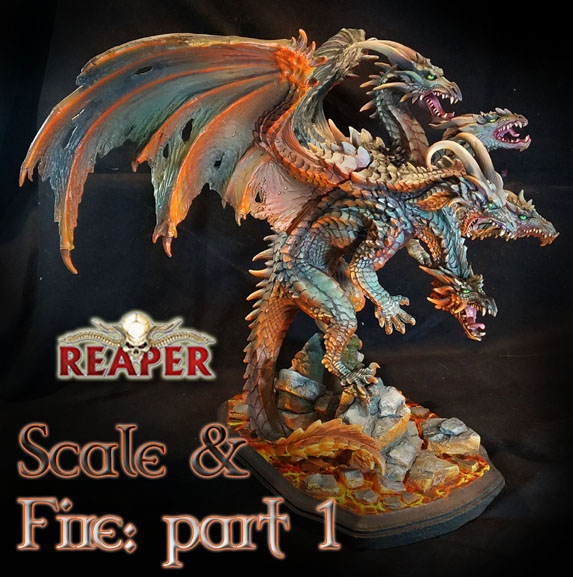 At long last, some images of the completed Mega Dragon from the Reaper BONES line, sculpted by Julie Guthrie.  I tried to take the best images that I could while we were still at the convention.

I did a few demonstrations on this monster, starting at GenCon last year.  Here's a look at the original post where I airbrushed the Stynlrez primer: 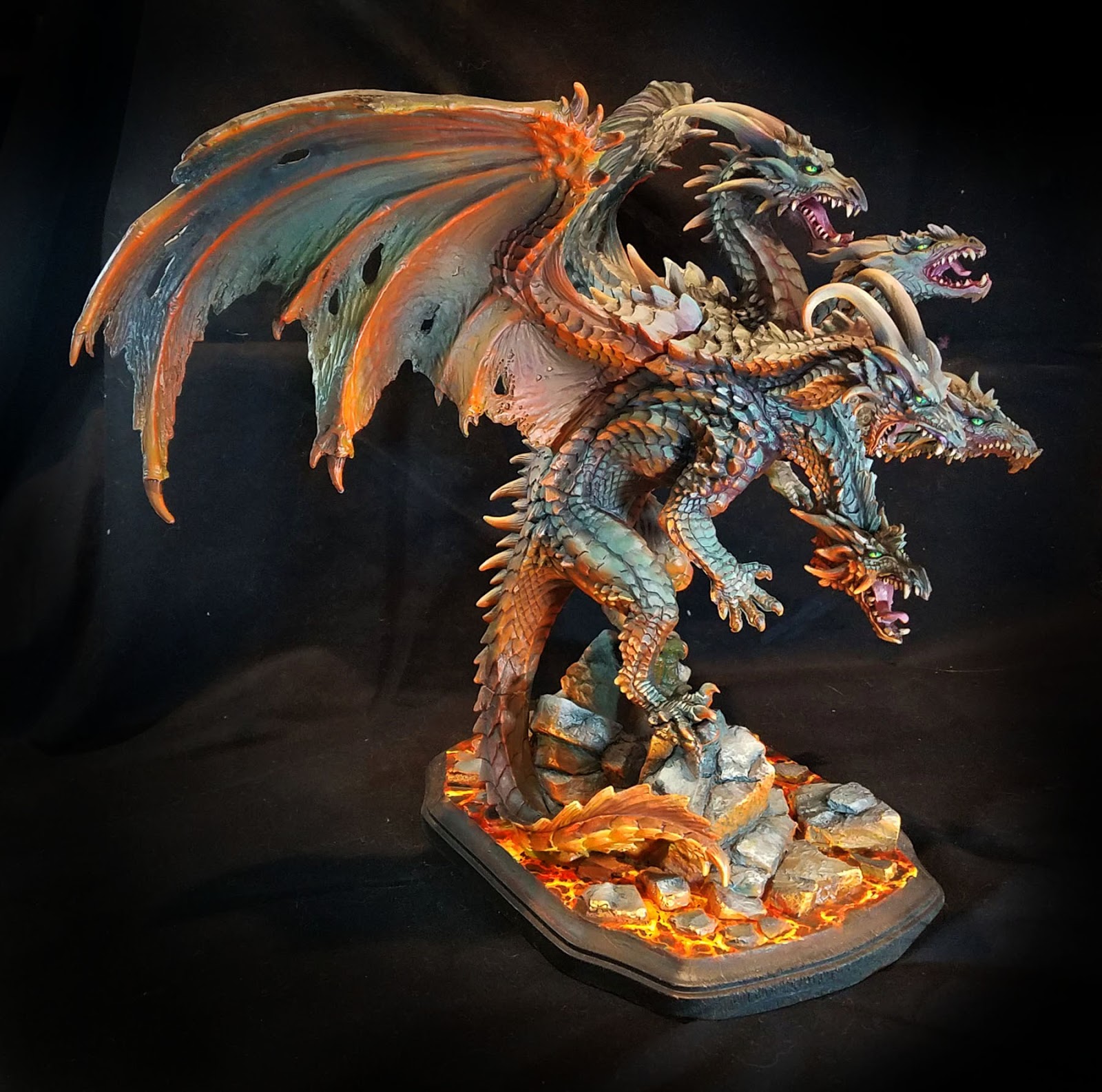 Here's part two of that series, which gives you an insight into how I approach massive beasts such as this: 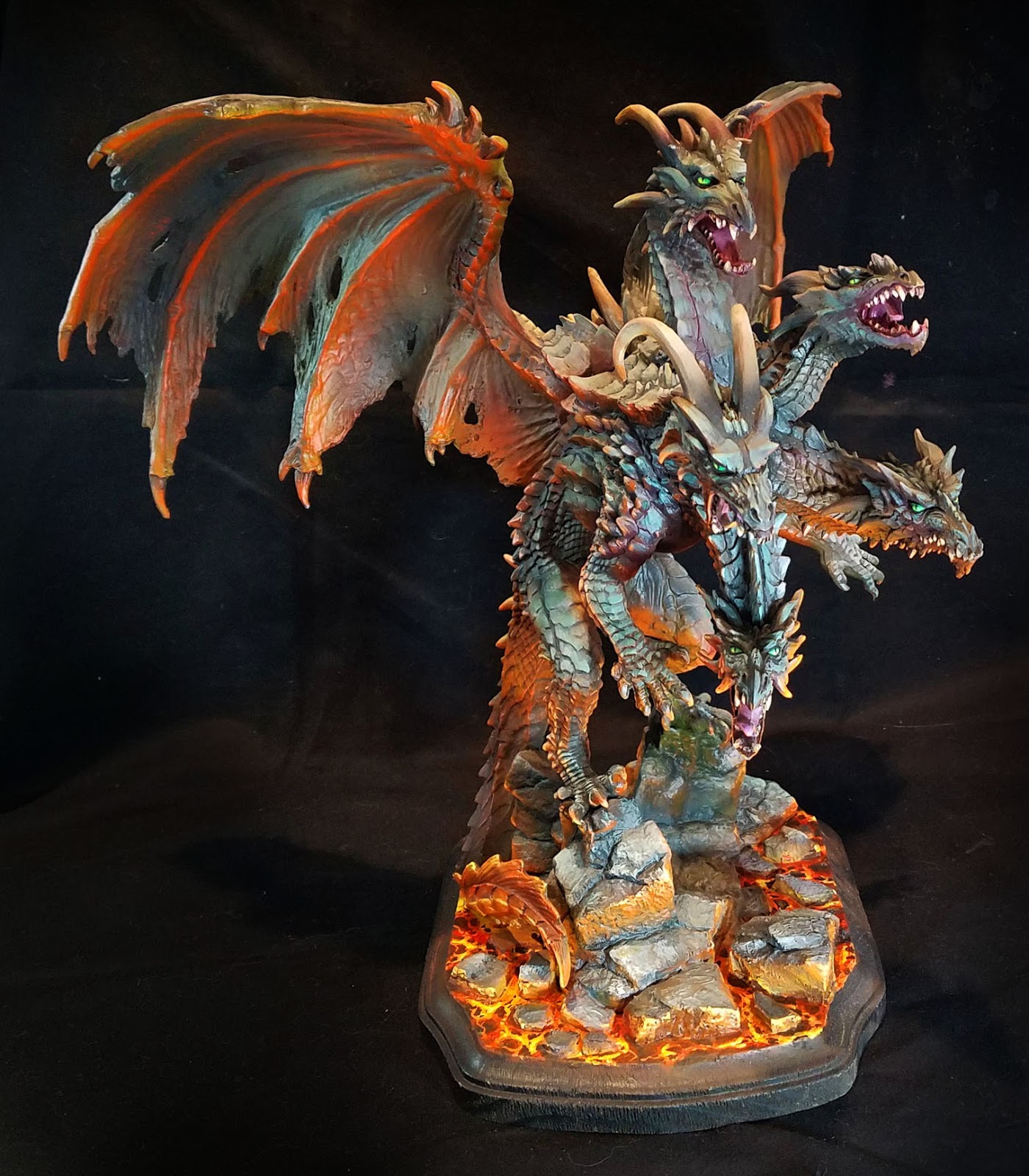 Once I had the lights and darks generally established, I could start to think about the basing, and the possibility of doing the lava reflections.  All of this work would be done with standard brushes. 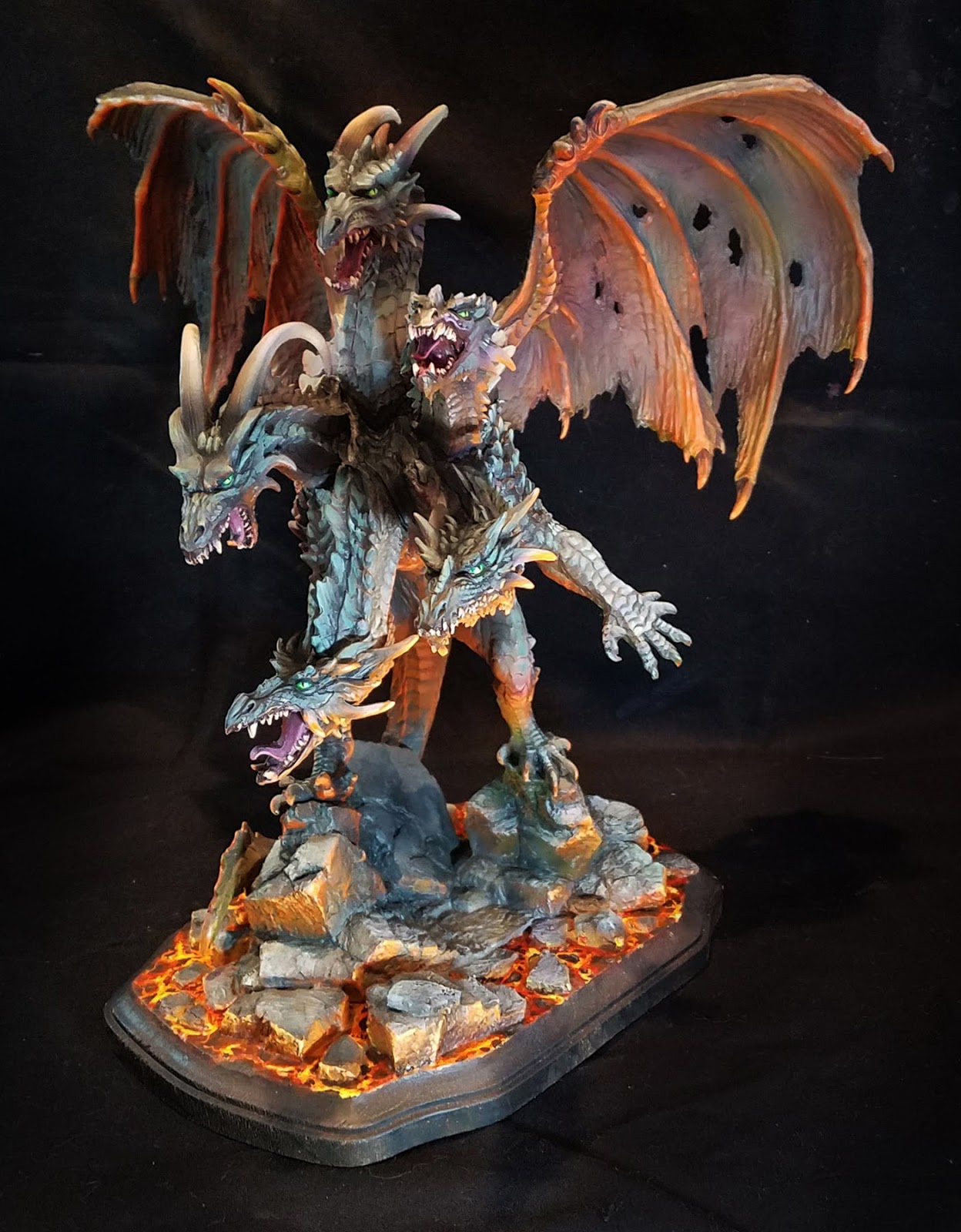 Using the same Vallejo florescent paints that I normally use for lava, I mapped out where I wanted the most intense reflections.  I have a Facebook Live episode that might help demonstrate the fluorescent paints as well: 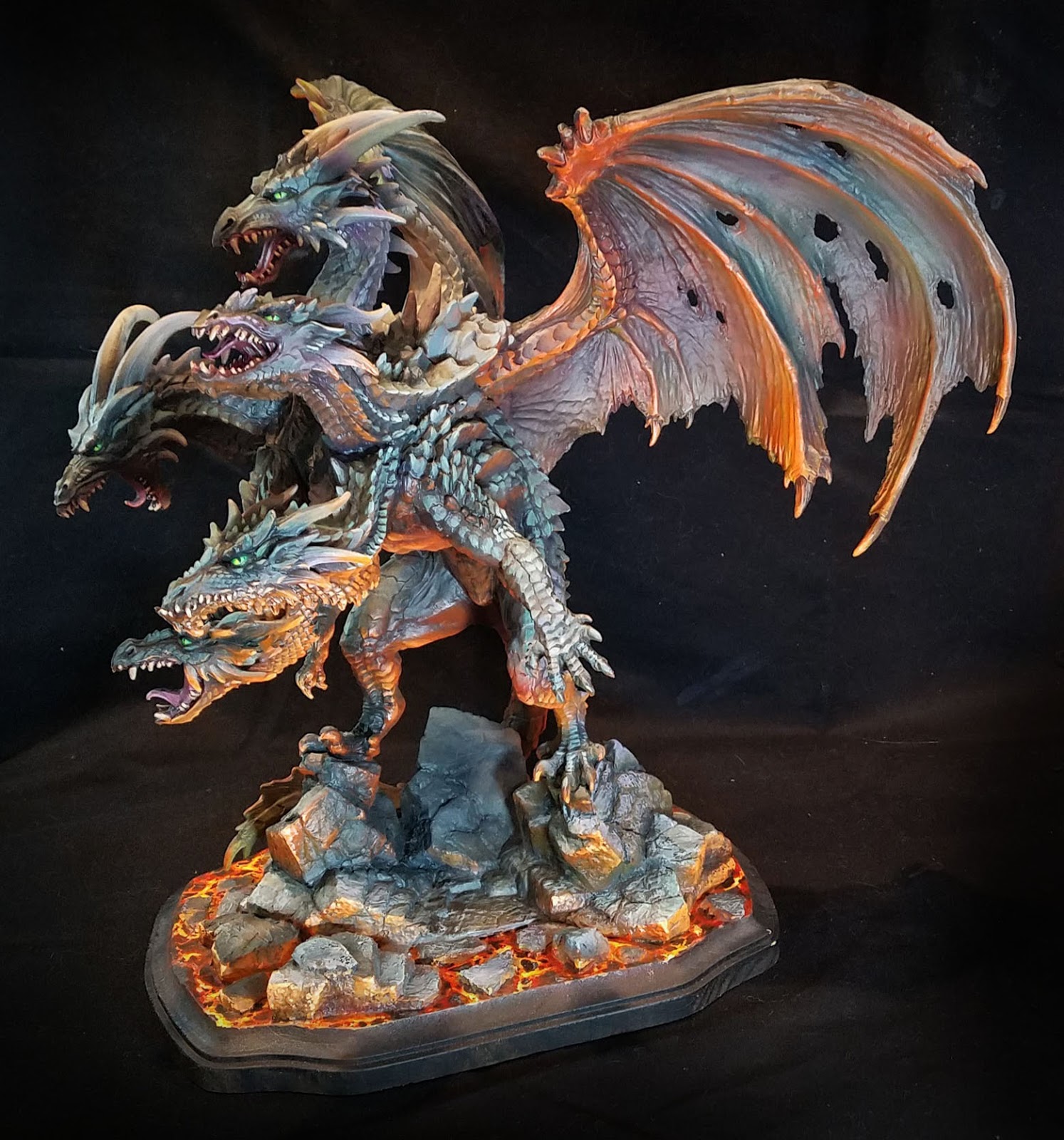 In order to make these colors stand out, I needed to have several types of contrast.  Not just darker colors to show the light, but much cooler tones as well as the muted, grayed down colors you see on the scales and wings. 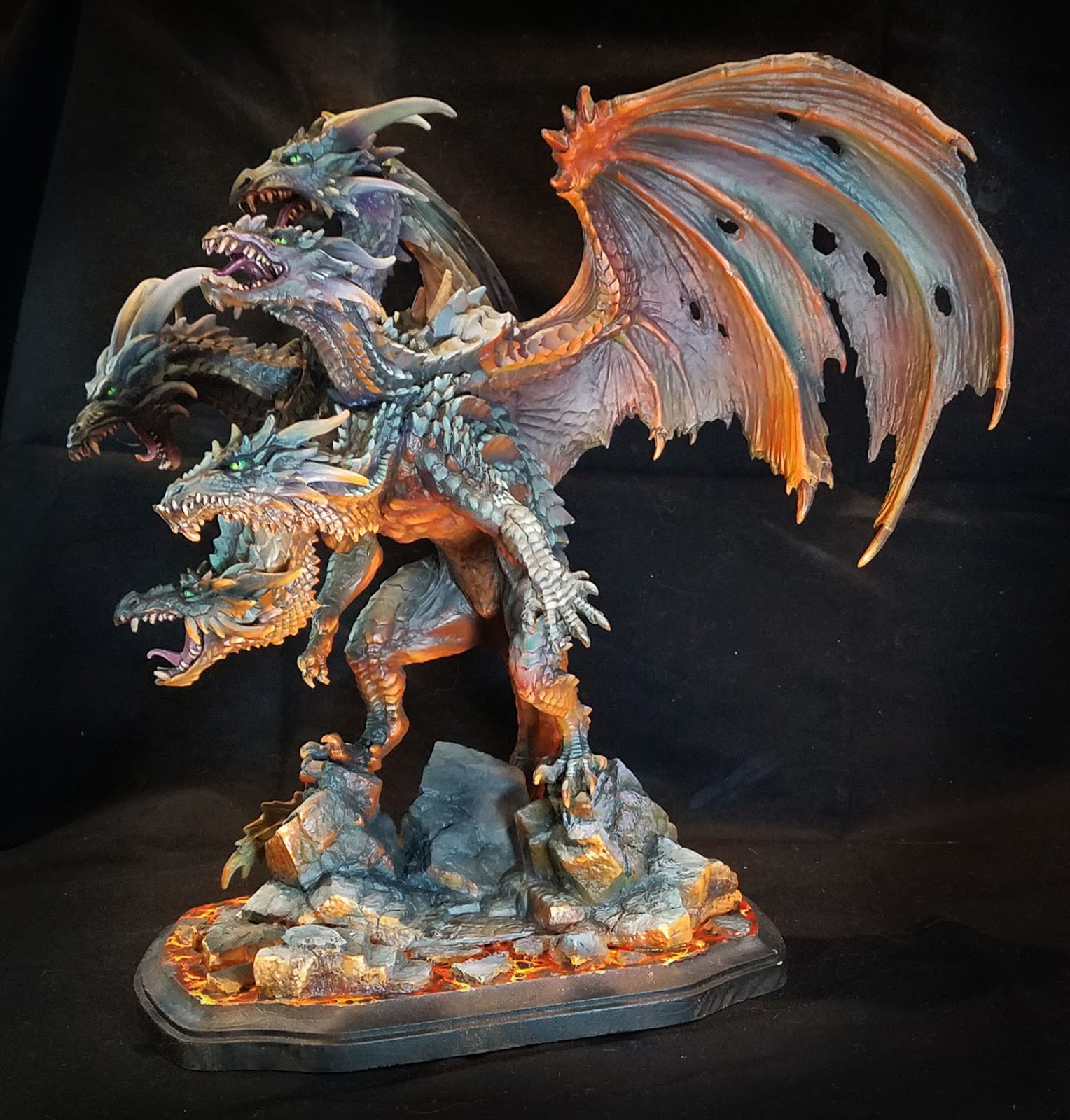 I used primarily mixtures of green and purple, which can make a variety of gray when a lighter color is added.  Using these simple colors, I can have an infinite variety of muted tones that register to the eye as "gray", but with far more interesting subtle tints.

If I have more green in the mixture, I have a wonderful greenish gray, etc.  On a figure as large as this, it is very important to widen the variety of tones over the wings, scales, and so on. 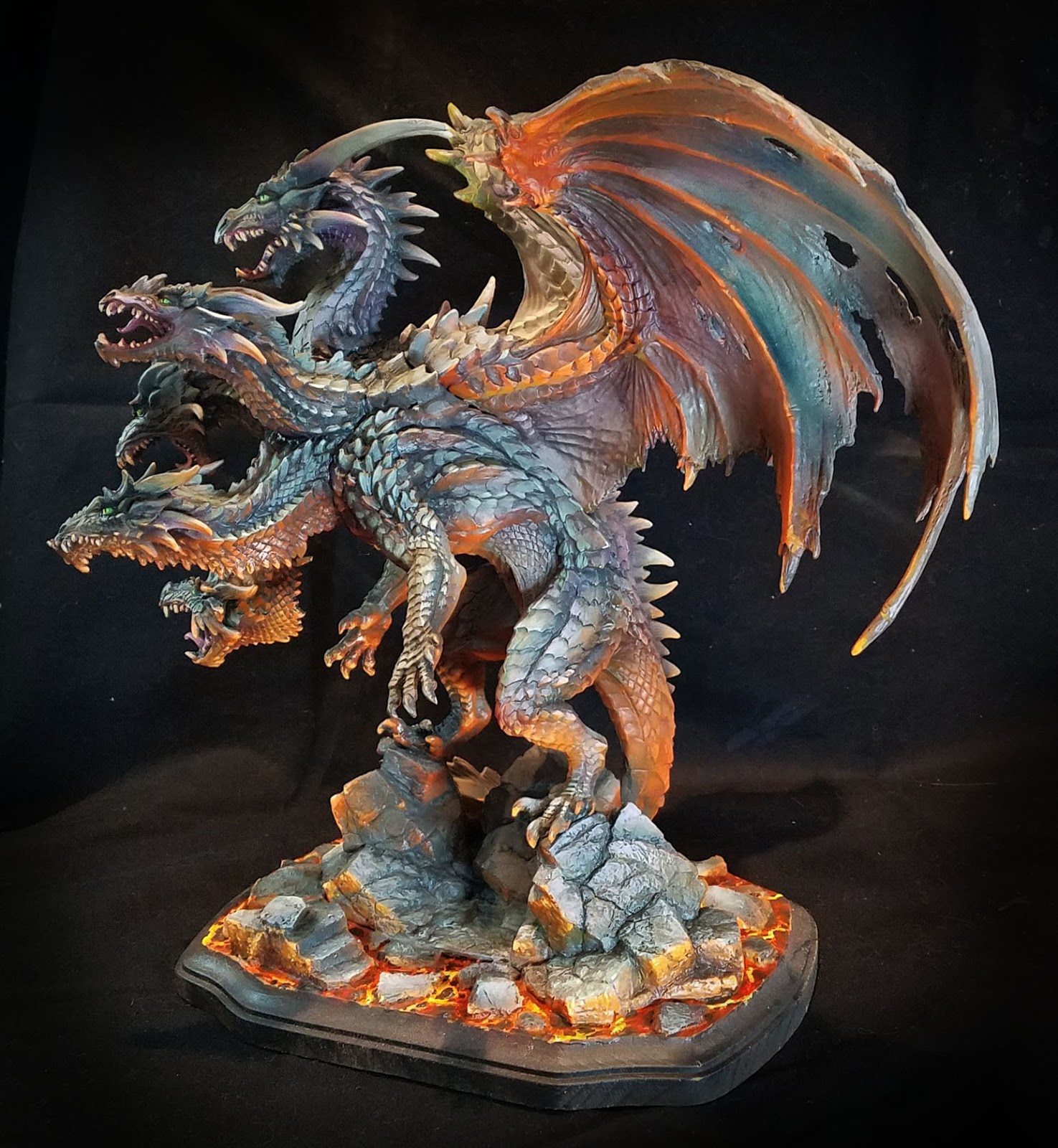 If you use only the same colors of gray everywhere, people looking at it will get very bored very quickly!  For instance, the wings have grayish greens, blues, purples and even tans. 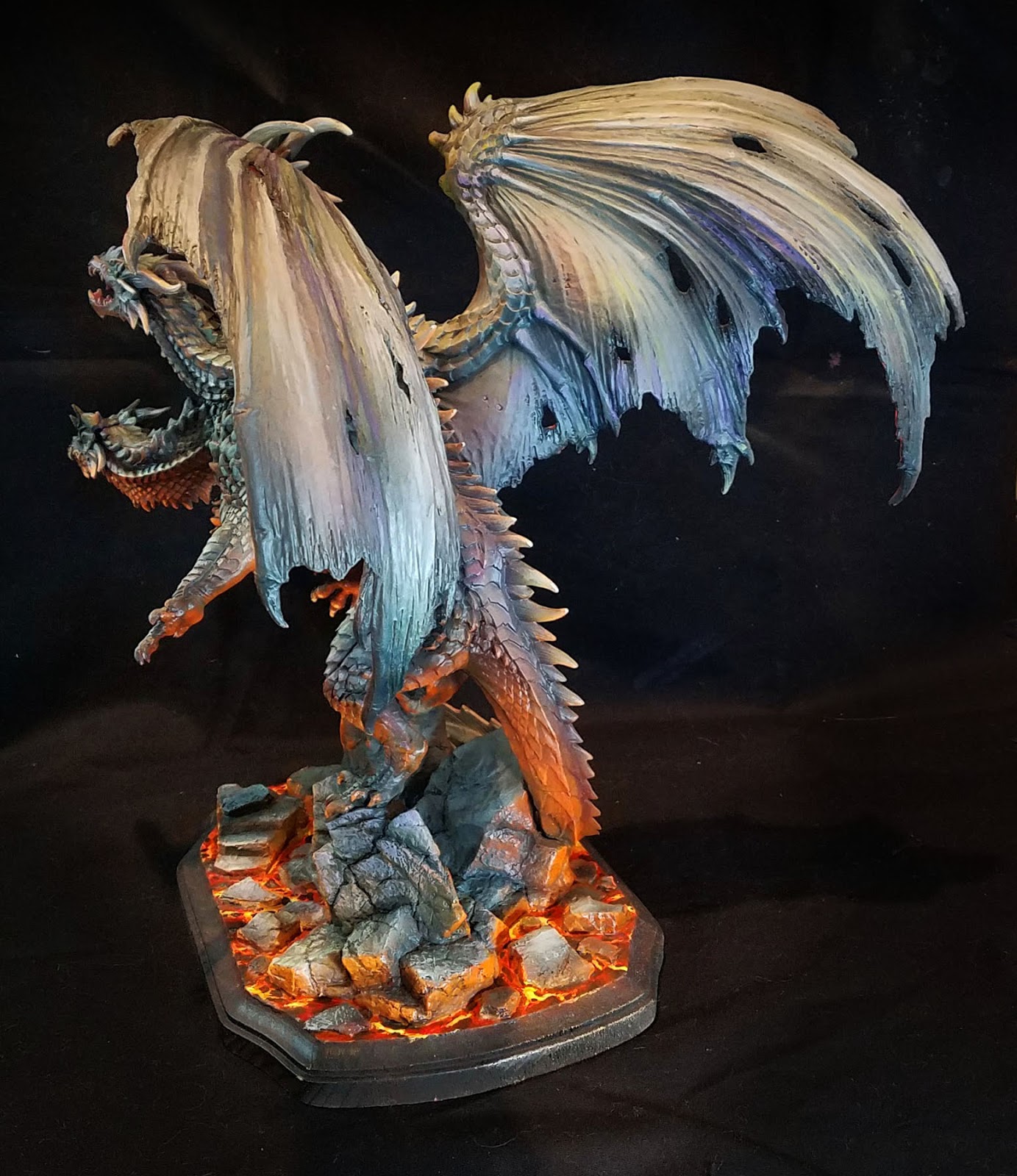 In fact, each wing has a slightly different set of colors.  When you approach the dragon, that all looks like 'gray', but looking closer will reveal all the very interesting color tricks that are taking place. 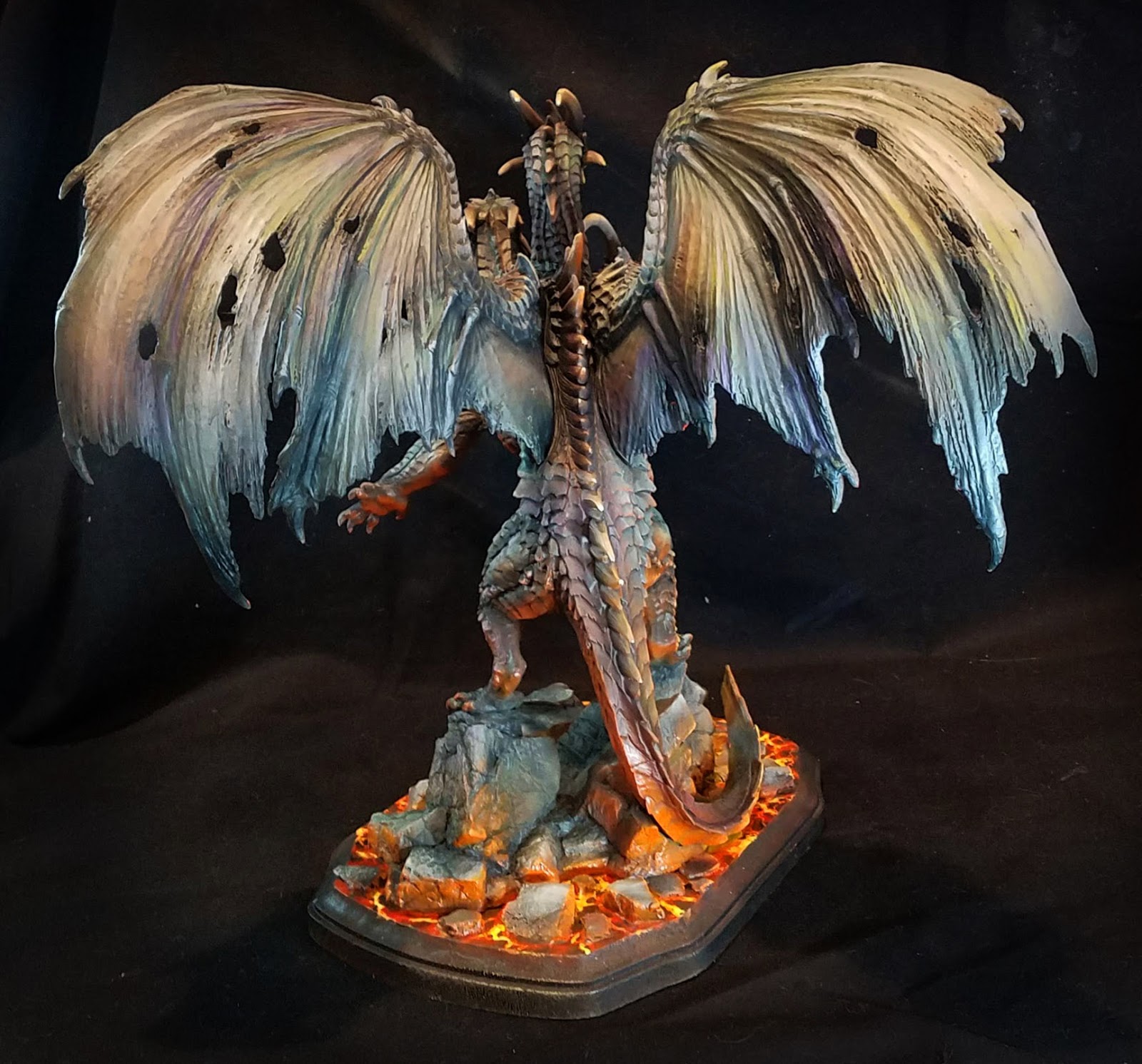 I repeated this on the scales, so that one head would be a tiny bit different than the other, but keeping to that same set of gray/purple mixes meant that I did not have to worry about "color unity".

While I could get a very wide range of colors, they were all created from the original batch of just 3, with a few glazes here and there of blue and brown liner paints. 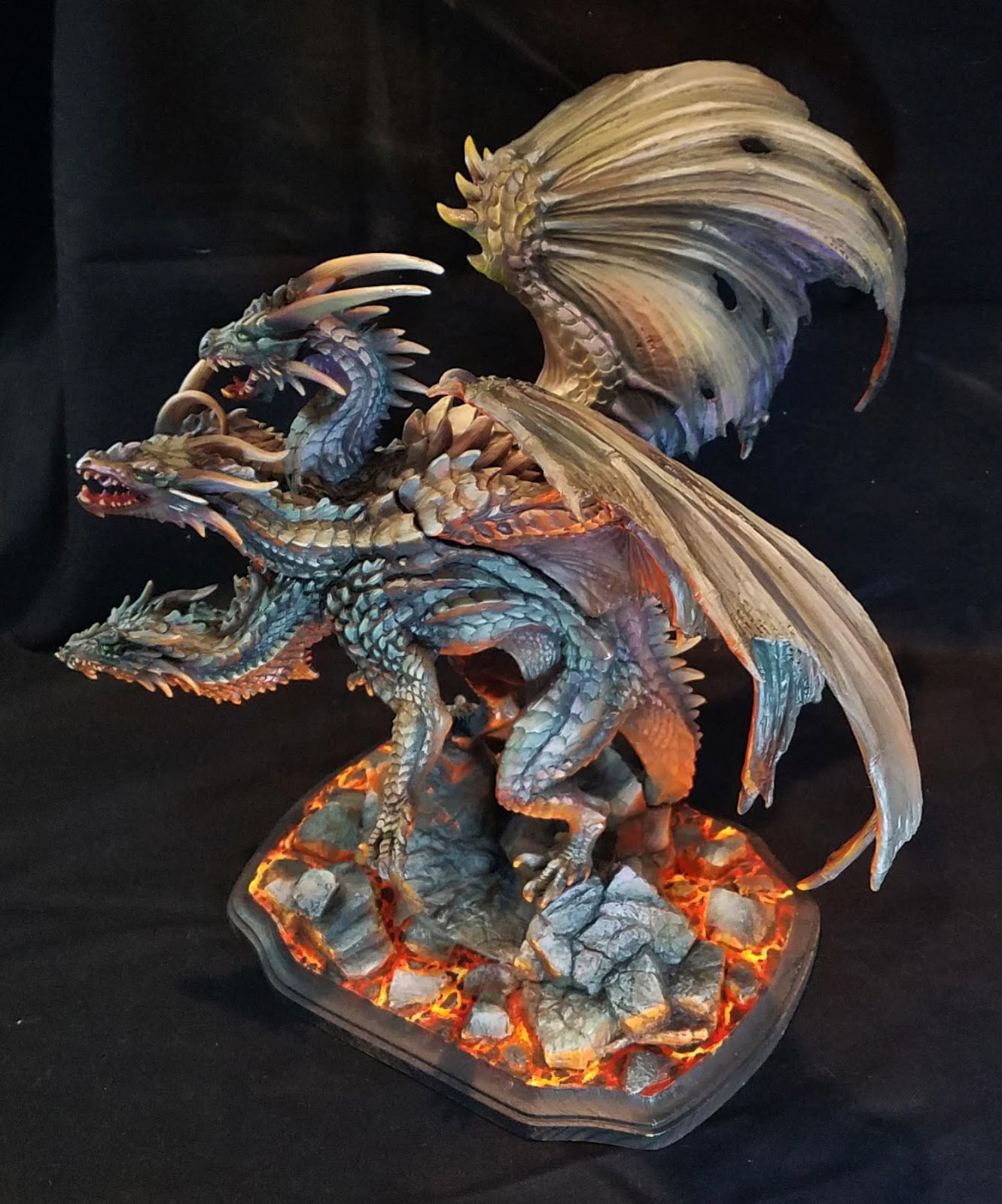 It was great to do several live demos on this dragon at Fort Wappel during ReaperCon!

Next year, I will try to have a much larger monitor, and perhaps even a mic set up so that it is easier to hear me.  Also, I will try to create a schedule of events before the convention.

I go into this type of color theory on just about all the painting videos available on my patreon page, in both acrylics and oils.  You can check that out here: 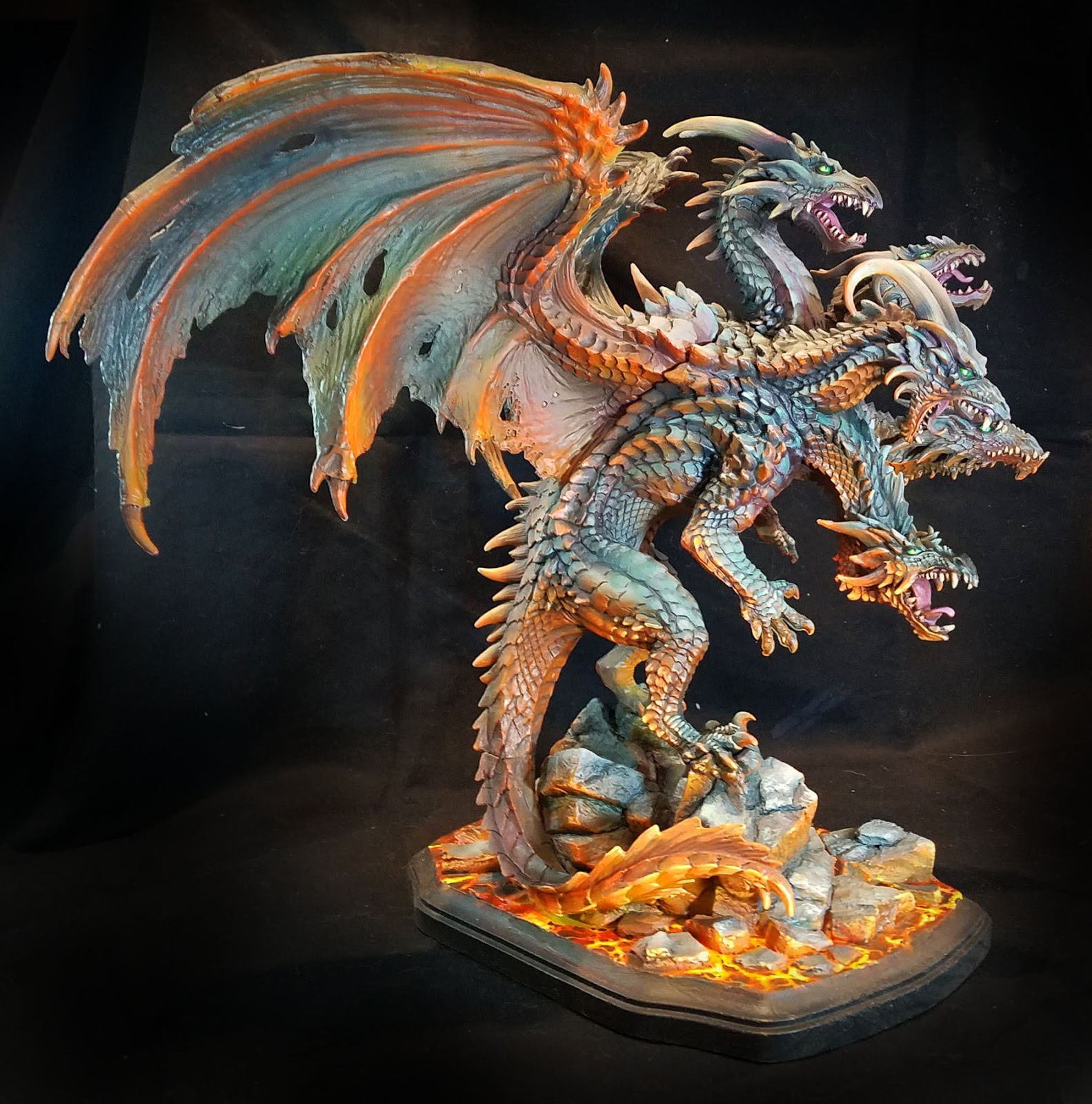