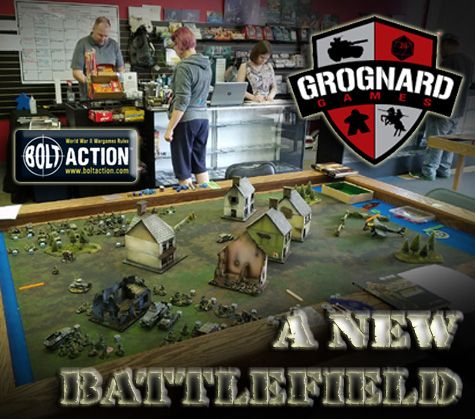 It's been a very long time since we have been to a game store.  A very long time in fact, close to 2 years!  There are many reasons for that, not the least of which the closest location is at least 45 minutes away in zero traffic.

That's not to say that there are not some very nice locations, such as Games Plus and Draxtar.  Since Cathy needed some new cards for Warhammer AoS Champions, we thought we would make a spontaneous trip to Grognard Games, and pick those up in person!

Lo and behold, a familiar face greeted us at the door, and it was a little like being back at the old GW Battle Bunker! 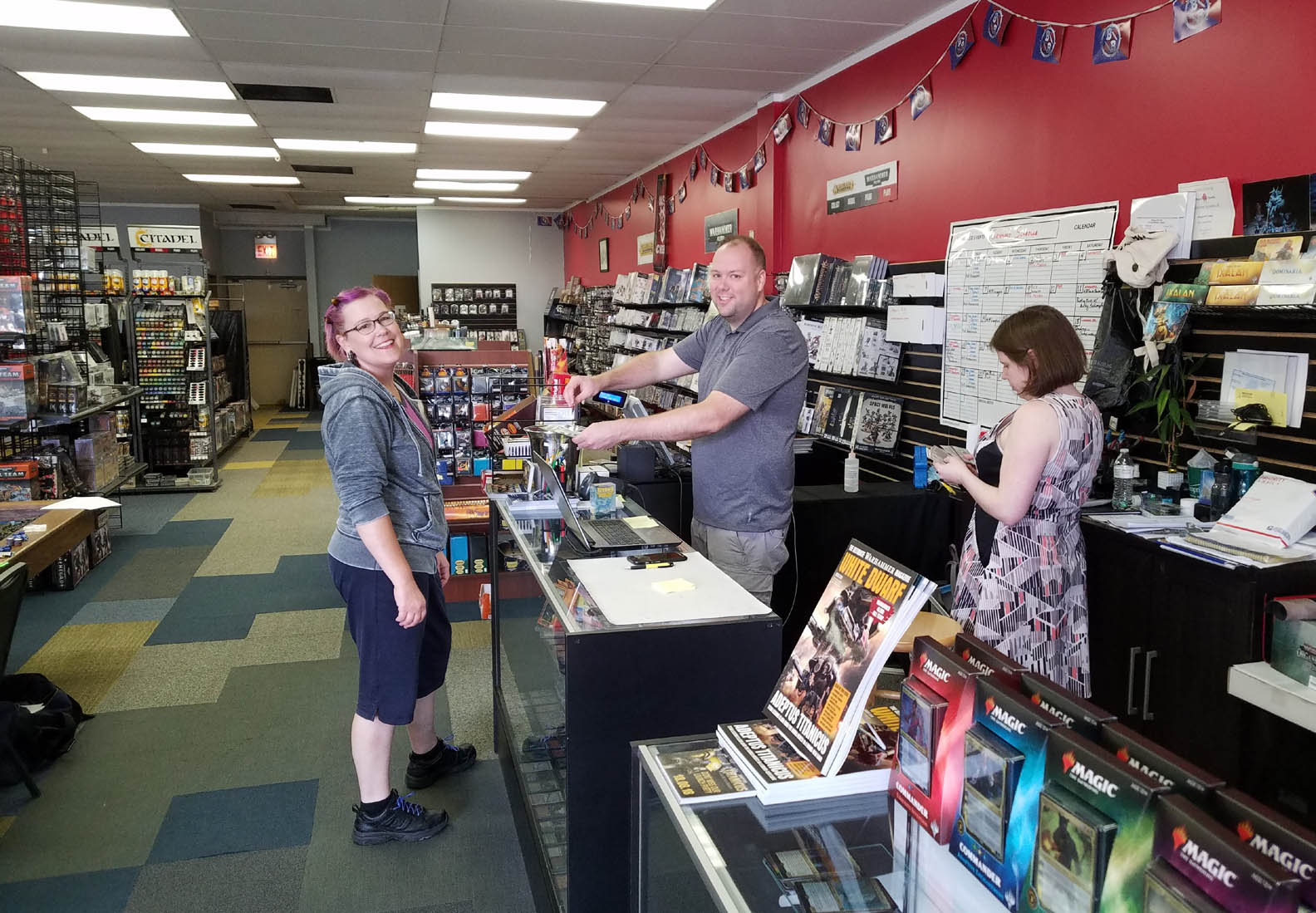 The layout was even more expansive than the last time we were here, with plenty of tables laid out with a great variety of terrain types. 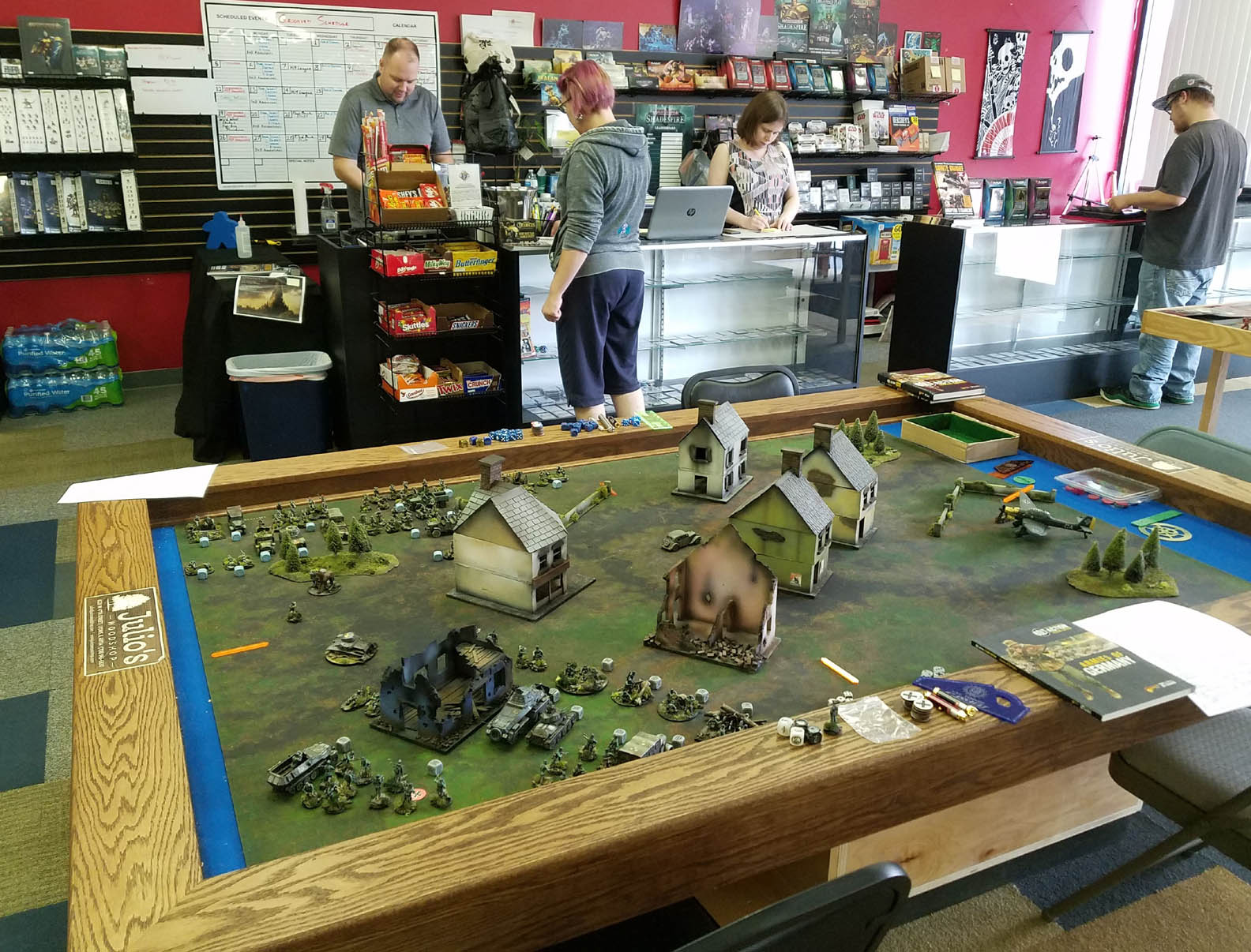 I had brought along the French and German Bolt Action armies, along with the new buildings for Nouvion, which are still in the process of being finished.  It was really different to be setting up a table for us in a location that wasn't the basement!! 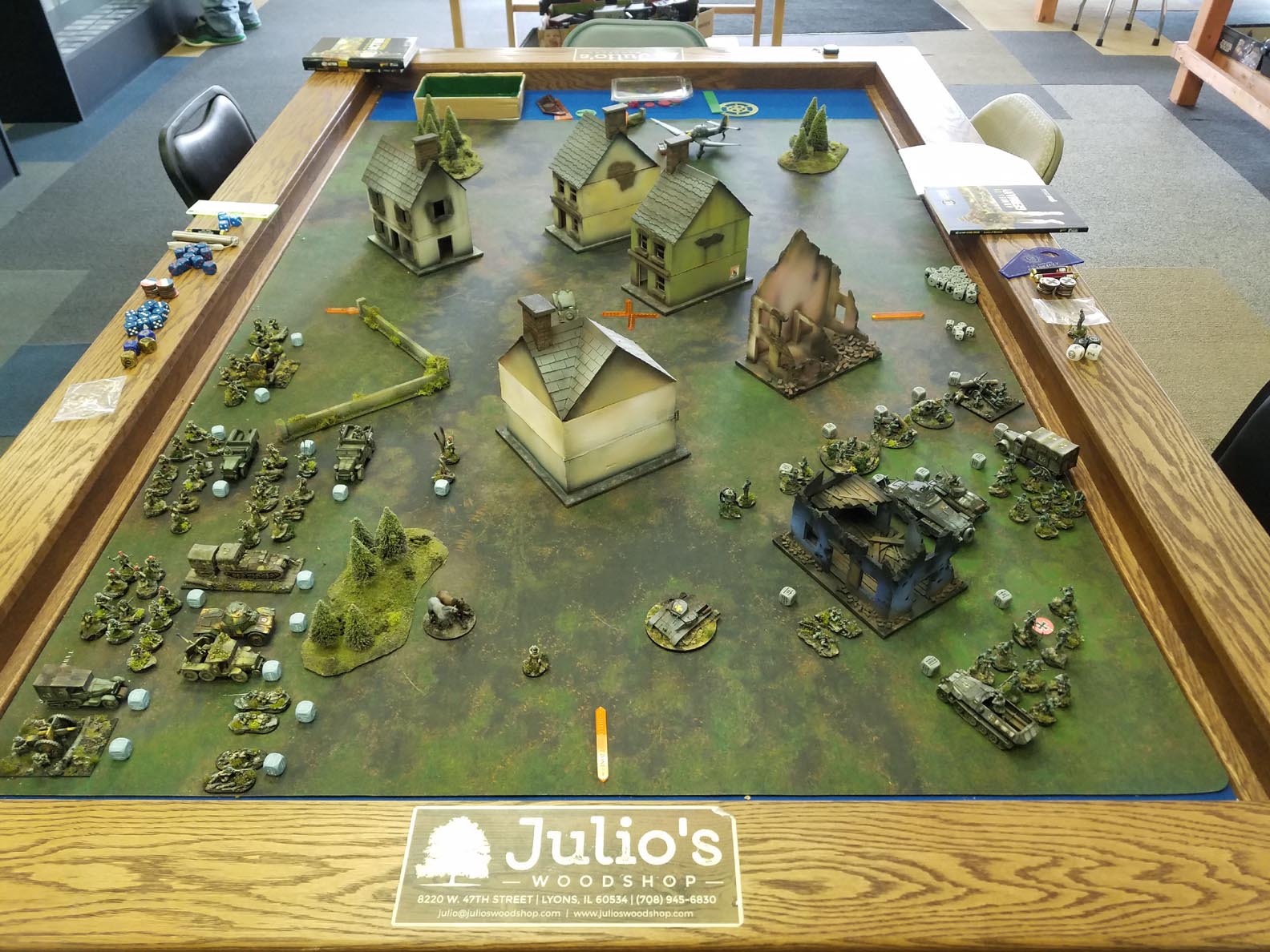 We thought this might be the appropriate time for Cathy's first genuine game of Bolt Action, with a real scenario, and an official army list.  She would take the German forces, since there were so many unfamiliar French units and rules to worry about. 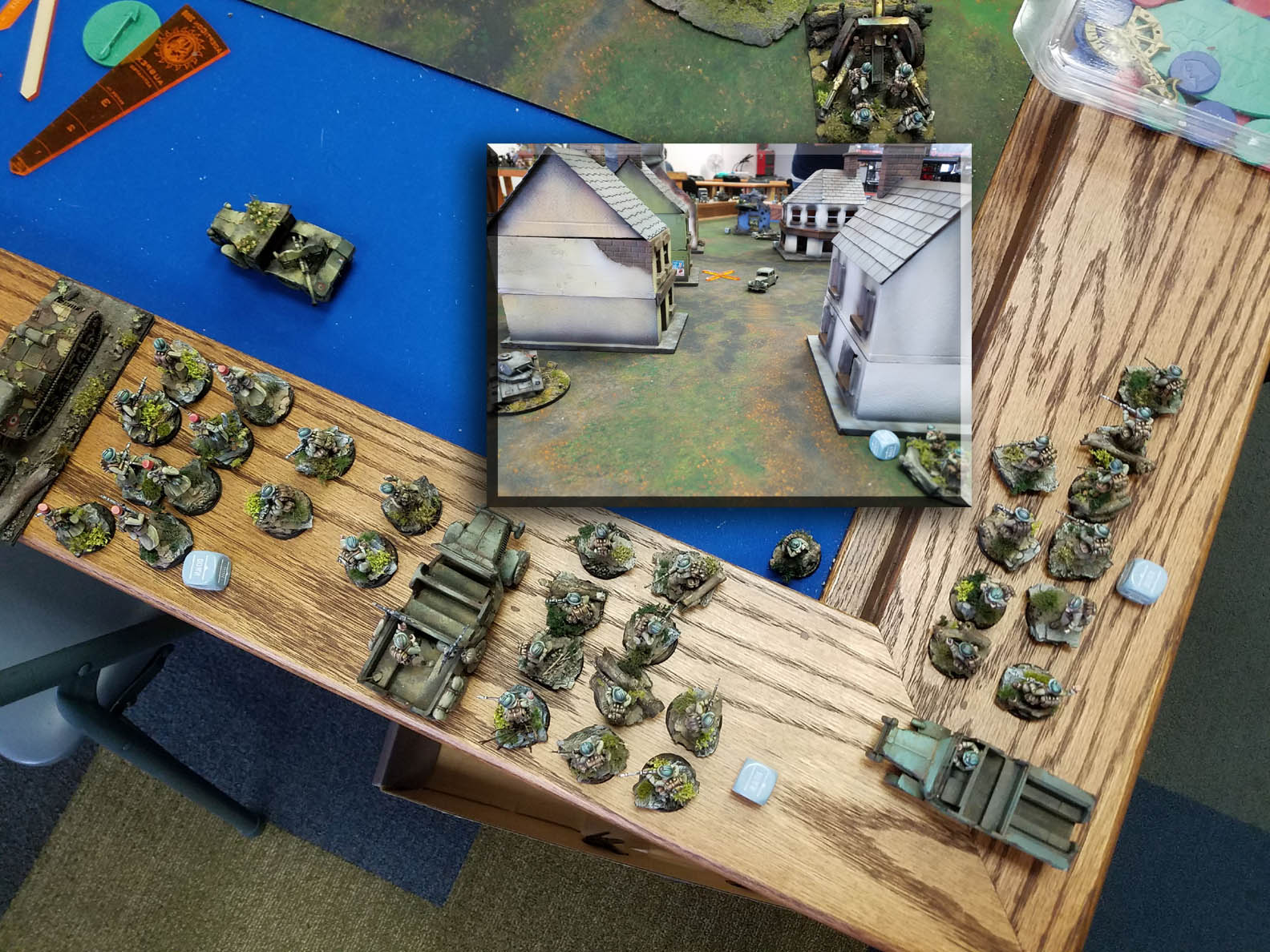 The mission was Sectors, and right away the fixed artillery pieces set up across from one another.  The French seemed particularly interested in the grounded Stuka! 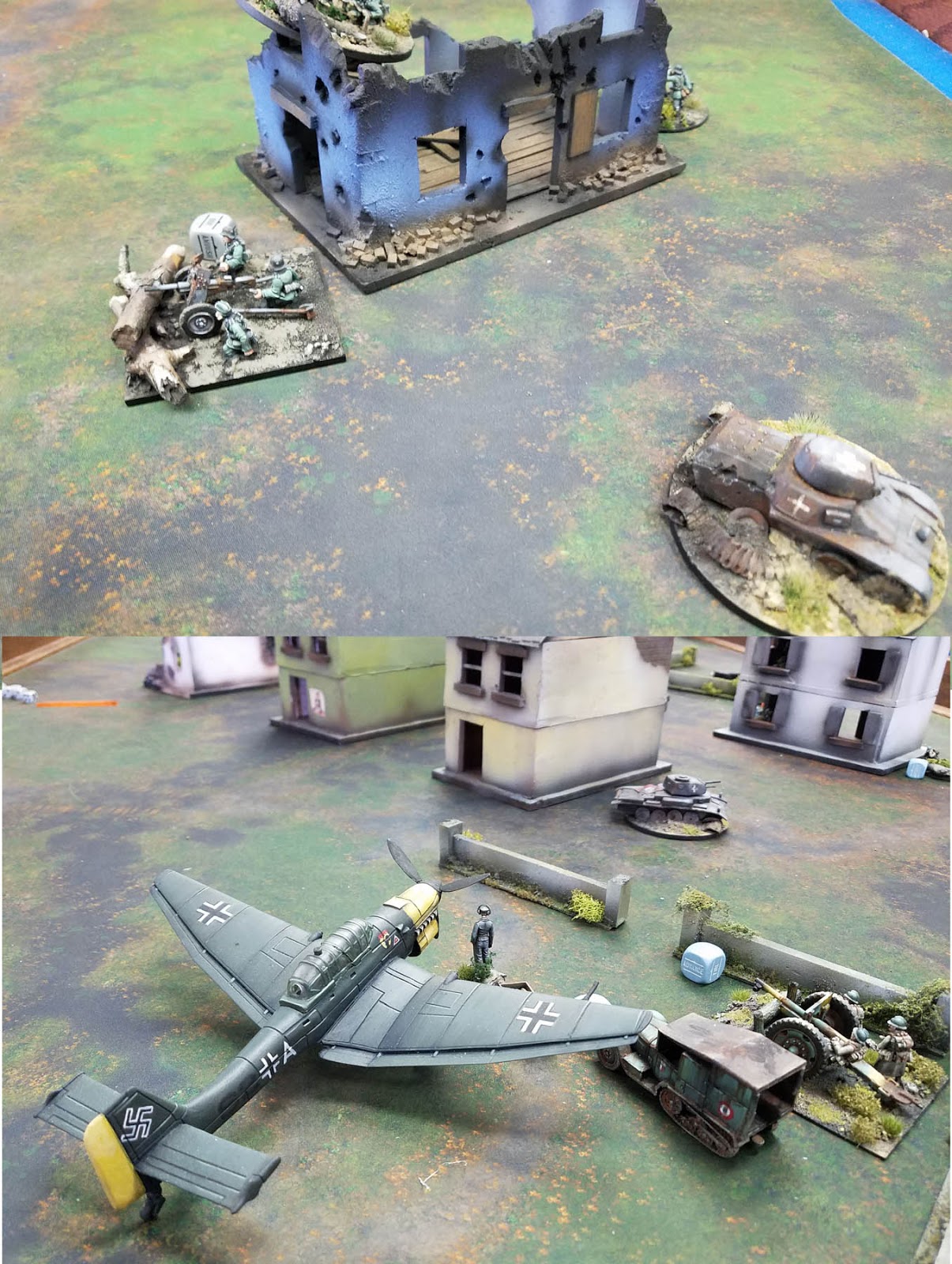 The French deployed an observer in the top floor of one of the buildings.  After so many games set in the Ardennes forest, it was quite different to be working with terrain this "tall".  Also, I had to start getting used to windows again, and just how many things can 'see' out of them. 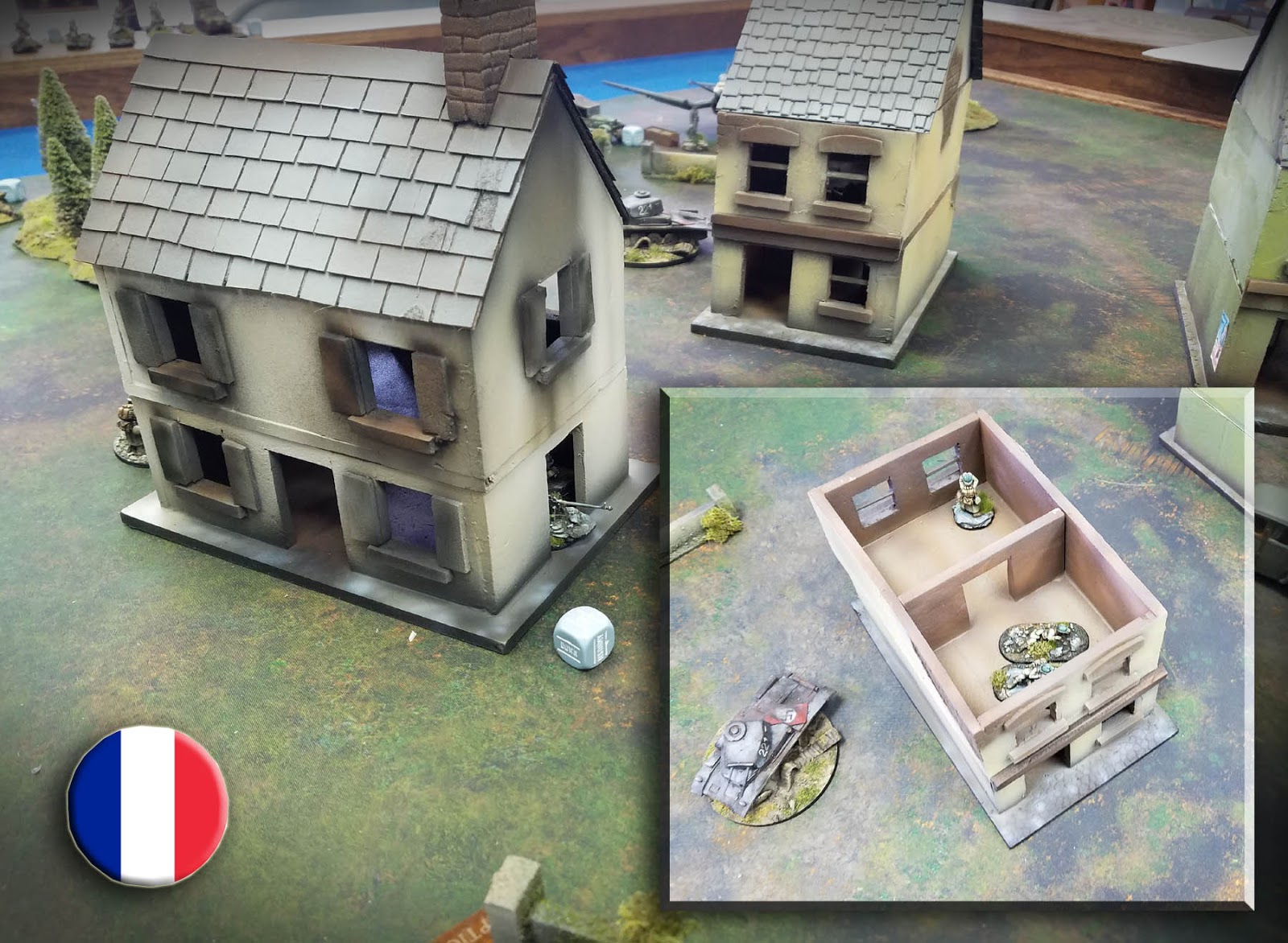 It didn't take very long for people to start showing up.  In fact, by 6pm, every table had one game system or another in action.  The store remained full until we left not long before close at 10pm.

It was kinda nice to see that much activity on a regular Wednesday evening that was not Magic related! 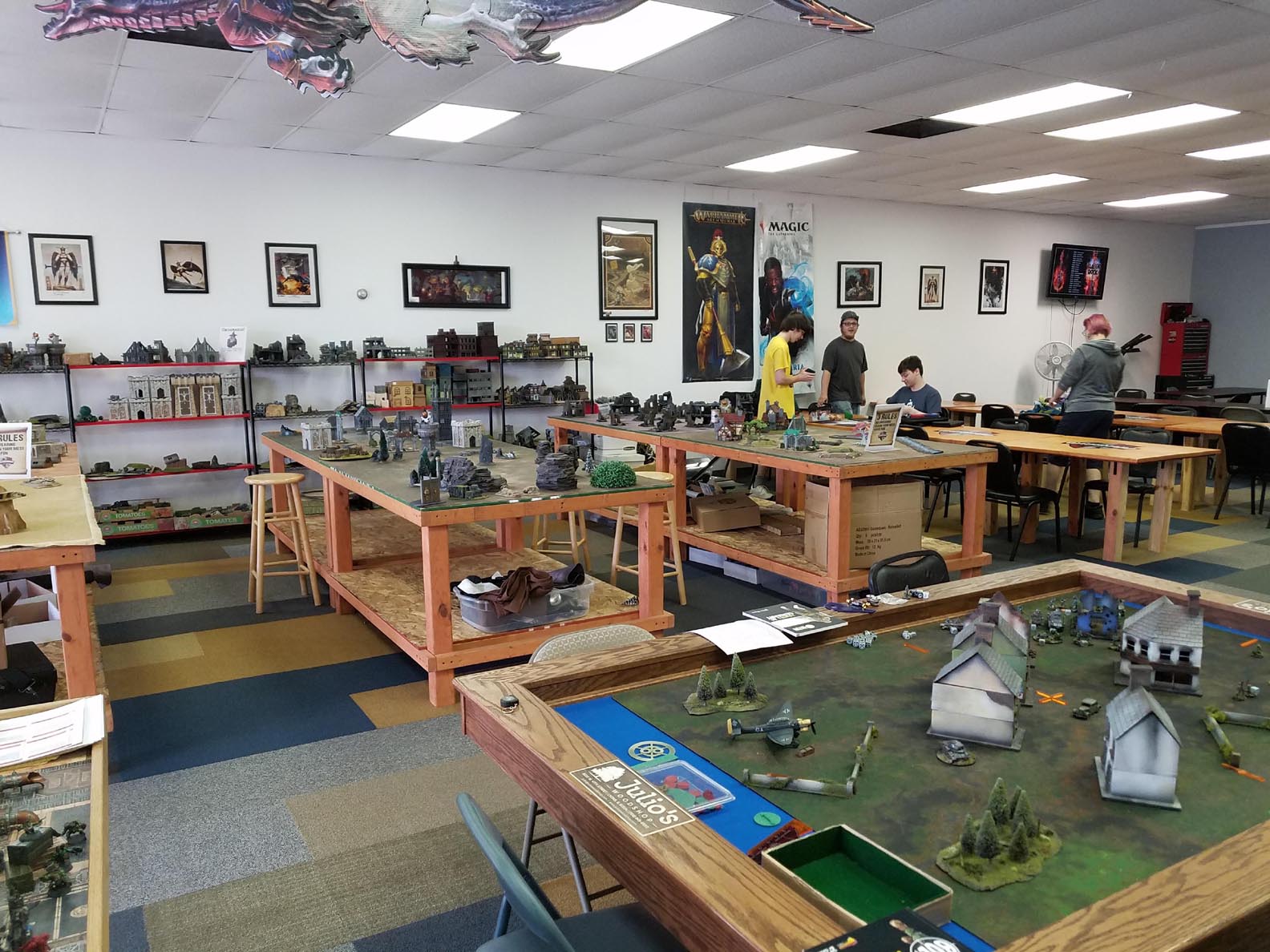 While the French had brought in a lot of artillery to guard the 'neutral' sectors, it would really be the German mortar team that would get off the most shots during the game.  Most howitzers and anti-tank rifles spent several turns in Ambush guarding key corridors of advance. 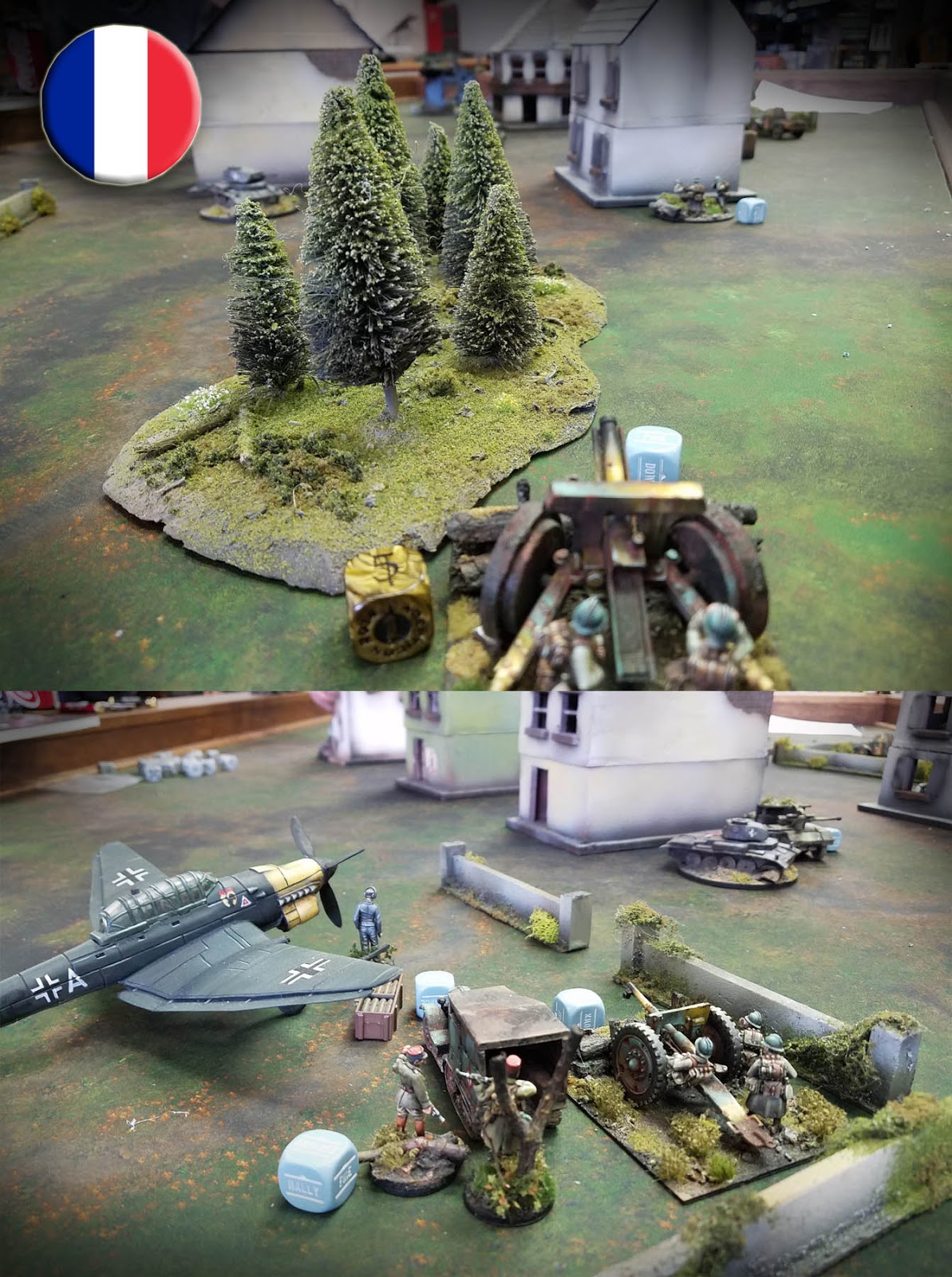 Knowing the Germans had the only tank in the field, the Laffly WTC15 Tank Destroyer waited patiently for its quarry...

However, the Germans did not oblige, and kept the armored car and Panzer 38T well hidden. 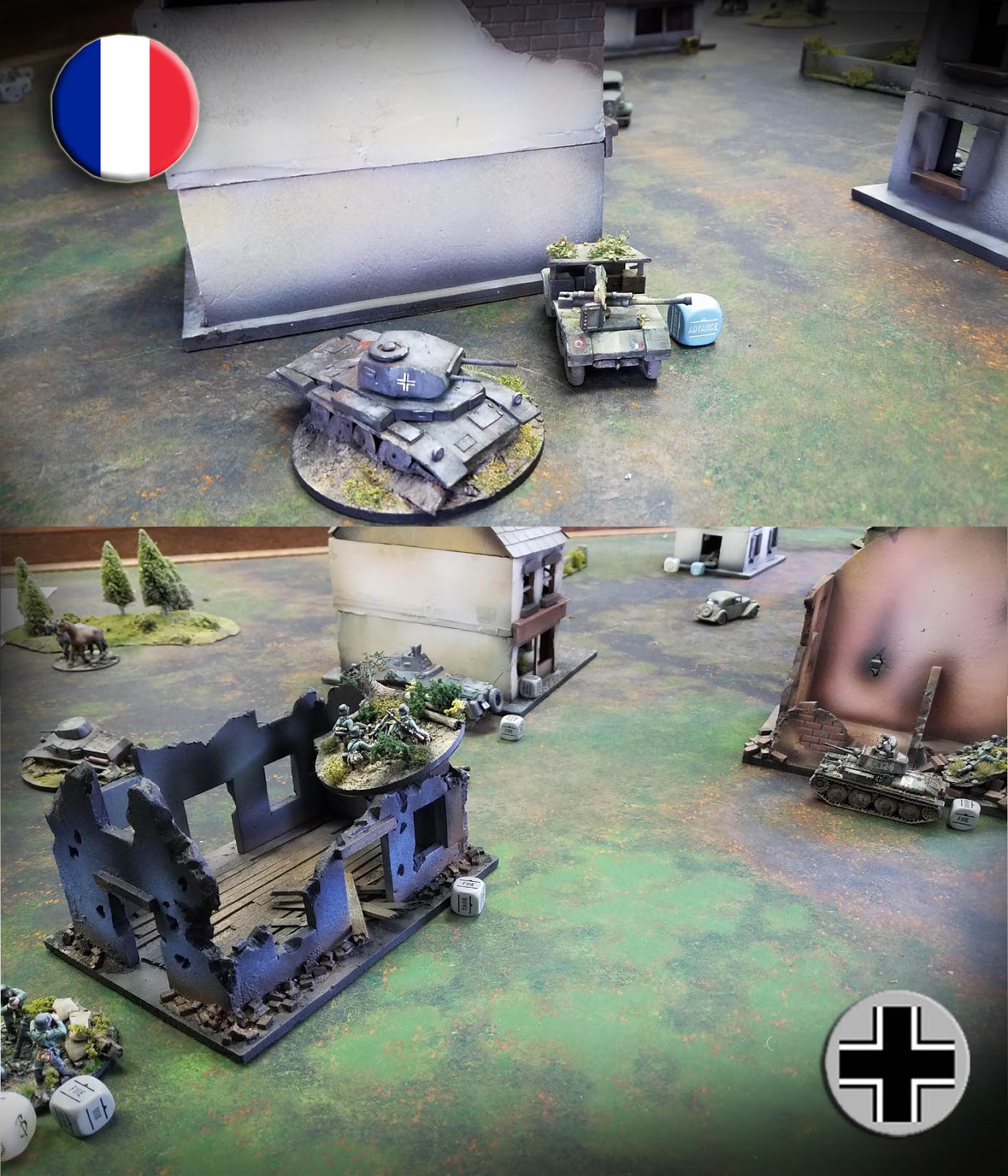 The Lorraine transport with its deadly cargo strode right up to the waiting anti-tank rifle and Panzer 38T, dropping them off into a freshly wallpapered building right on the edge of the Axis deployment zone and 3 points!

It was still quite early yet, so time will tell if they will survive to claim that sector.

I have a how to article on the way to show how I created the wallpaper, so stay tuned for that!

Speaking of staying tuned, the second episode of this first Battle for Nouvion is coming up.  Can the French drive the German invaders from this village? 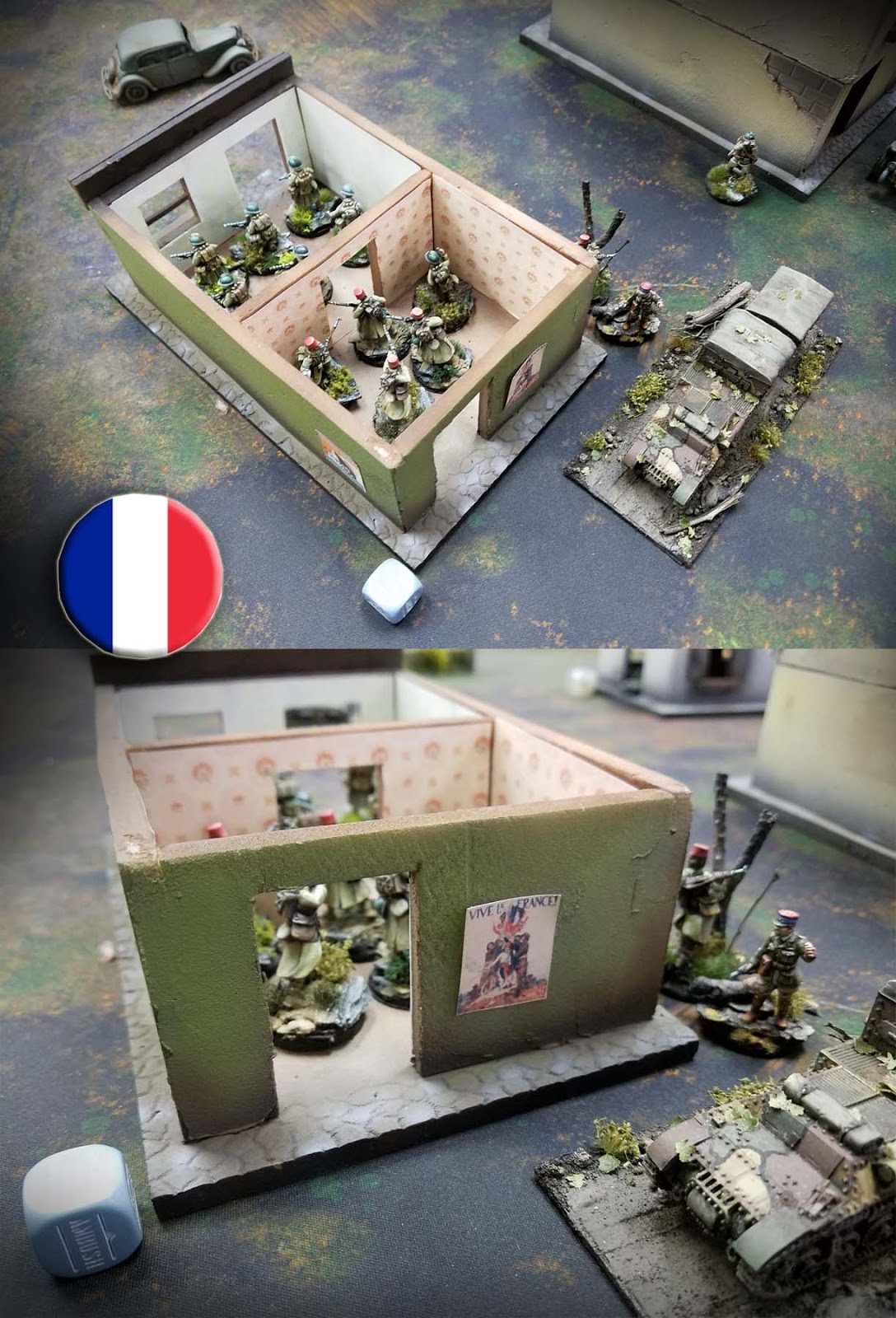