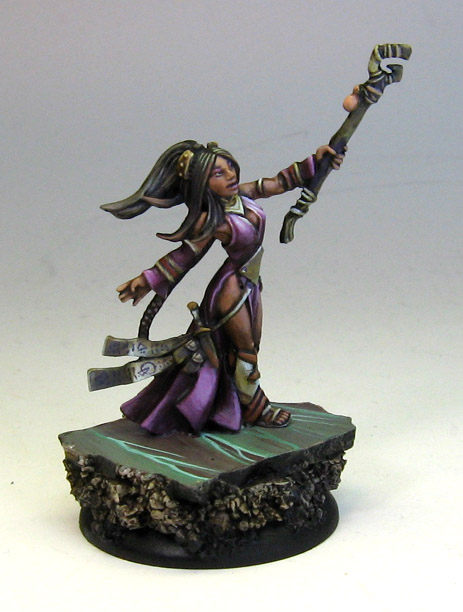 Once more... another flesh tone.  This time it's the Ruddy/tanned look.  I meant to take a comparison shot next to the African tones, but I forgot... Anyway, this gives you an idea at least :-)

I have been using those Badger air brush paints more and more.  Not excessive, but in key situations.  I am using them with regular brushes, taking advantage of how thinned down they are right out of the bottle!

So, you will be seeing them here and there in the videos.  As time goes on, and I make post kickstarter videos, you will probably see more of them introduced.  I am pretty sure that I will be making a stand alone video just for using those paints with "airbrushes on sticks".

Here's a shot of the base.  The reddish brown that I used for the base coat was one of the Badger air brush paints. 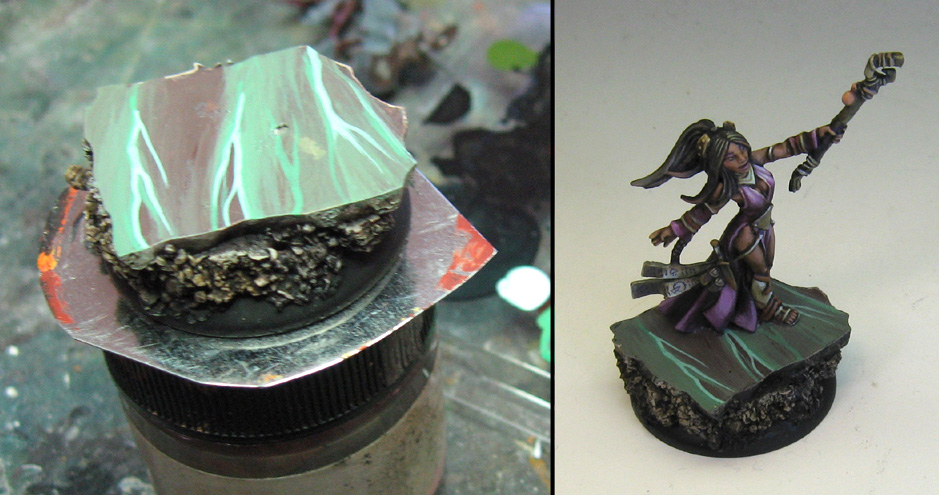 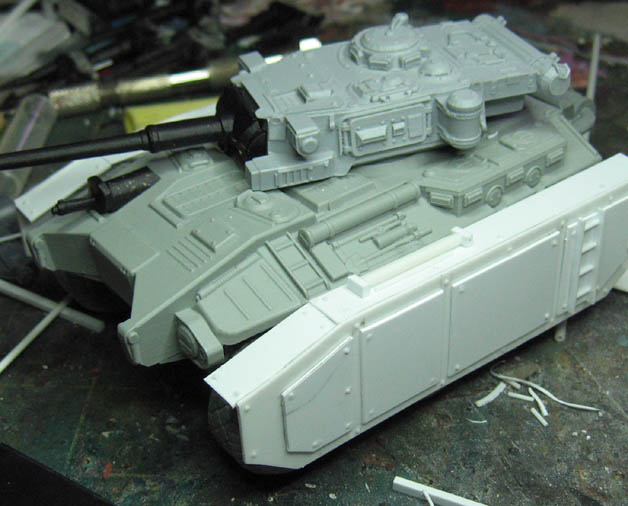 All right!  Time to keep building that extra armor for the Secret Weapon tank!
At this stage, I am building up the armor plating by placing slightly thinner layers of plasticard on the original piece.

Also, it is time to magnetize this, which I do by gluing some rare earth magnets to my polystyrene tubes (they just happened to be the same diameter!)  On the tank hull, I have small pieces of sheet metal. 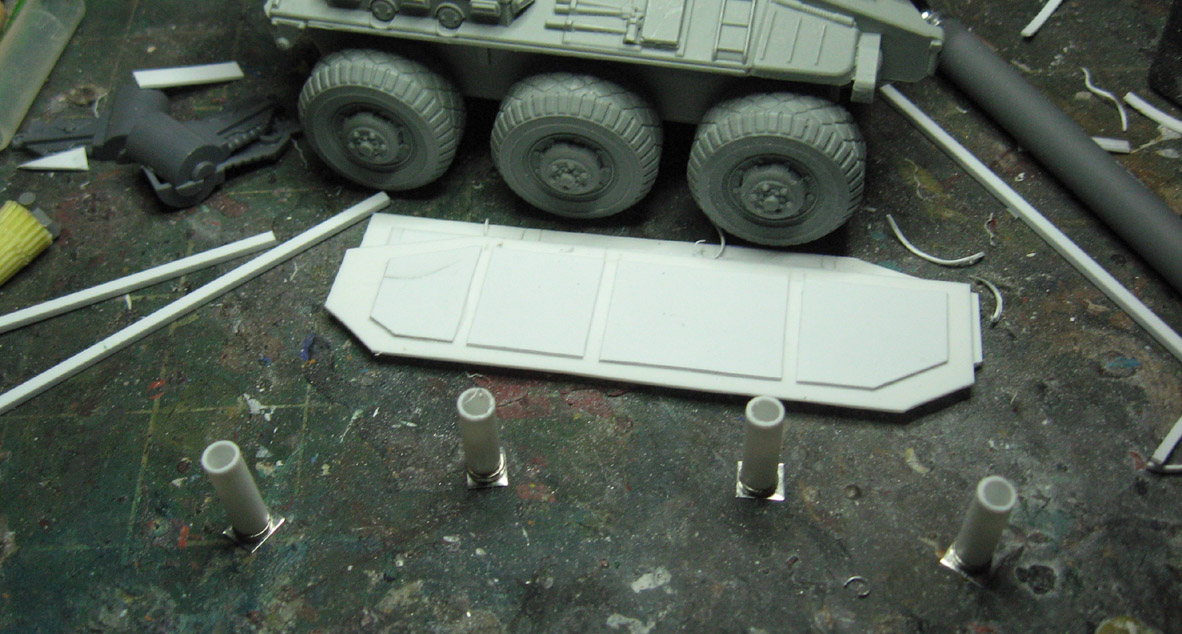 The magnetized rods are attached so that I can see where to glue the main plates... 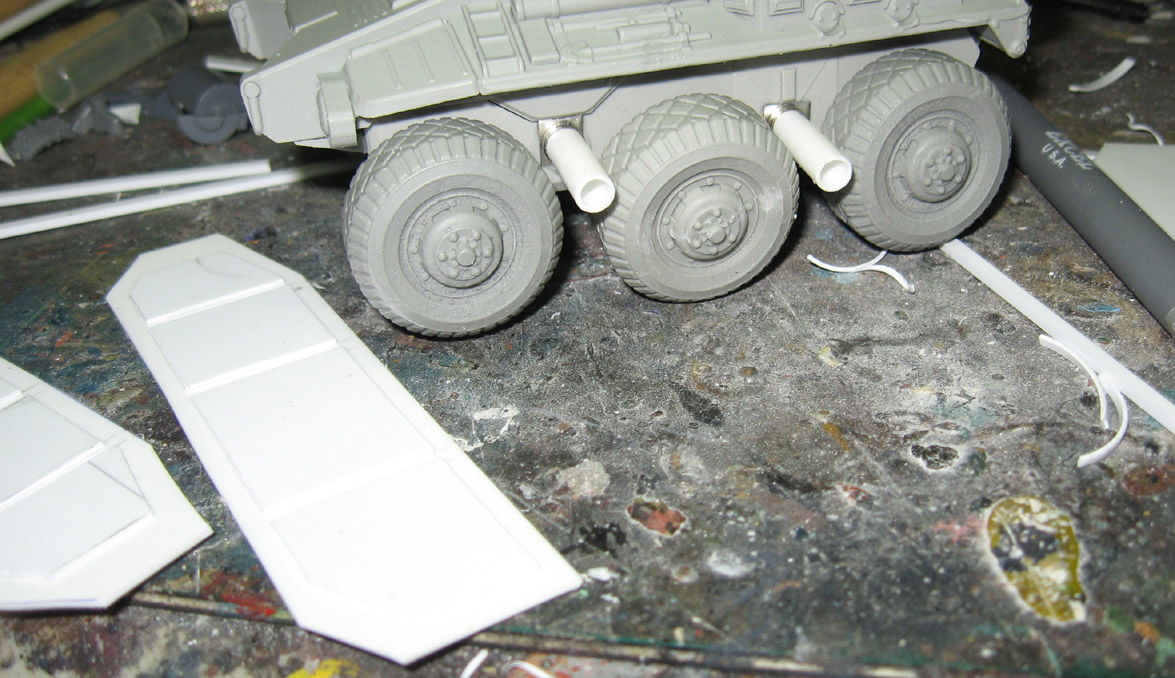 I put a few details on the opposite side of the main plate which will be facing the tank hull.

Most of you have seen me crate rivets by cutting very tiny polystyrene tubing with a very sharp exacto knife.  It can be a very tedious process, and many of the rivets will hop right off the table as you cut them.  You have to work through the aggravation :-)

I have a dab of glue handy, which I apply to the plasticard with a pin.  I use the knife to pick up the rivets and put them in place. 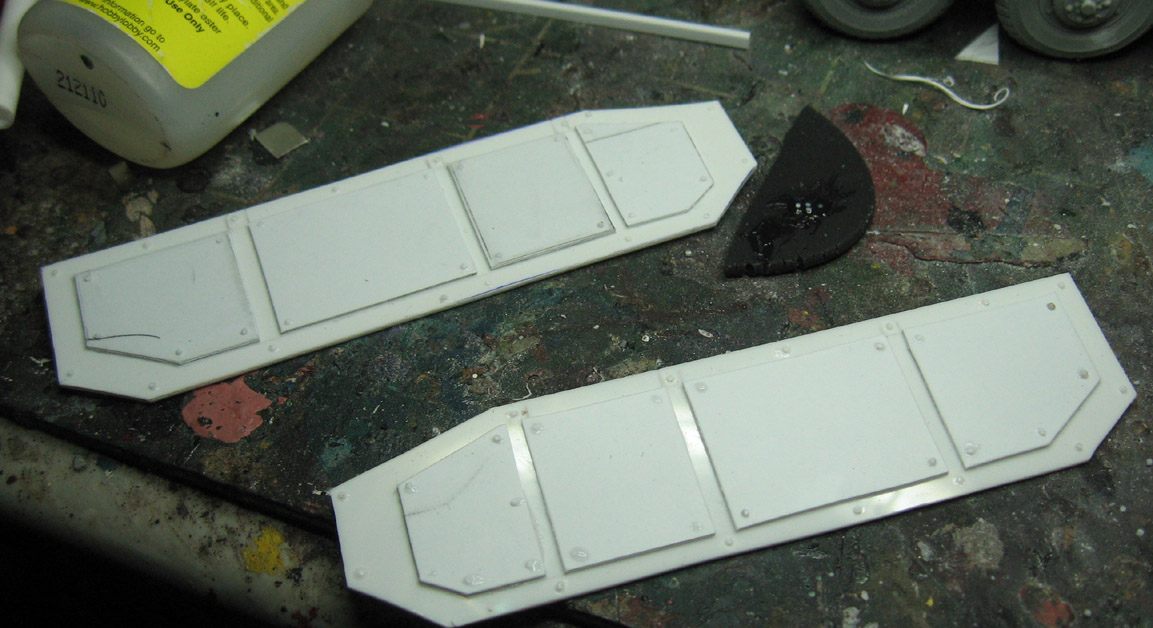 With the rivets and extra plate finished, it is time to glue them onto the magnetized rods.  This was a very tricky process, as my reference points got a little fragged, to say the least. 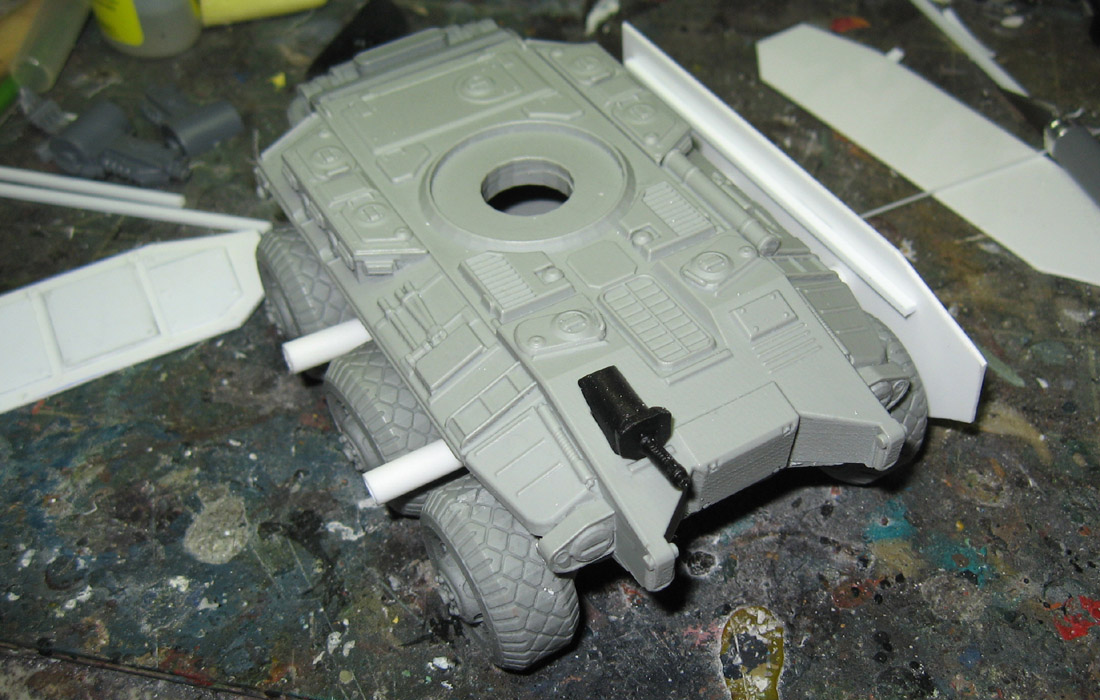 But, I think I got them just about exactly where I wanted them. 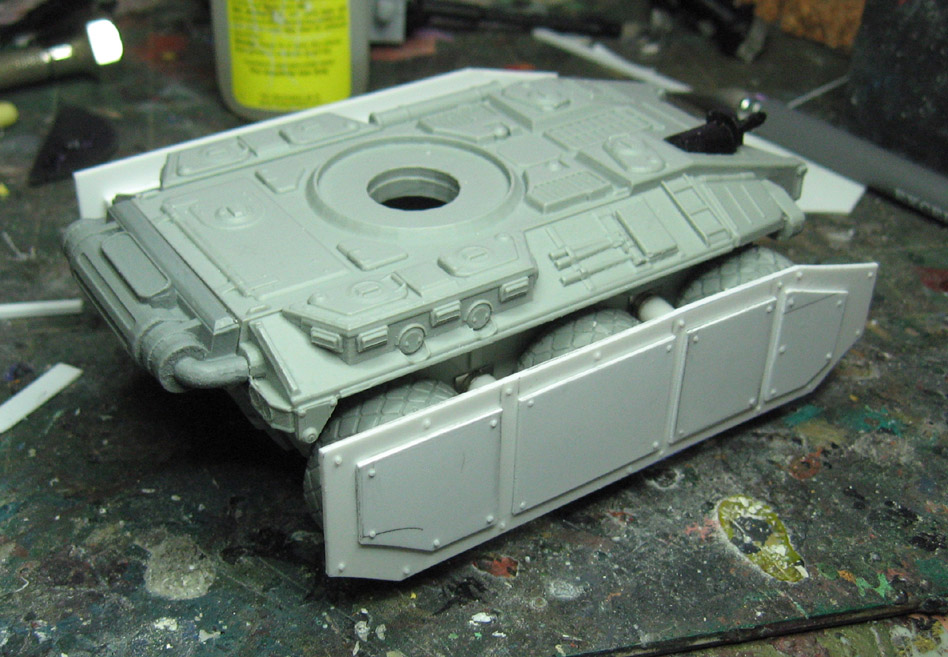 They were going to look a little odd so far out from the top of the tank, so I was glad that I had chosen to create a 'top piece' for the spaced armor.  Besides, it will give it a real resemblance to a Chimera :-)

Strips of plasticard were cut to nearly fill the gap entirely.  They are basically flush with the top edge of the vertical plate. 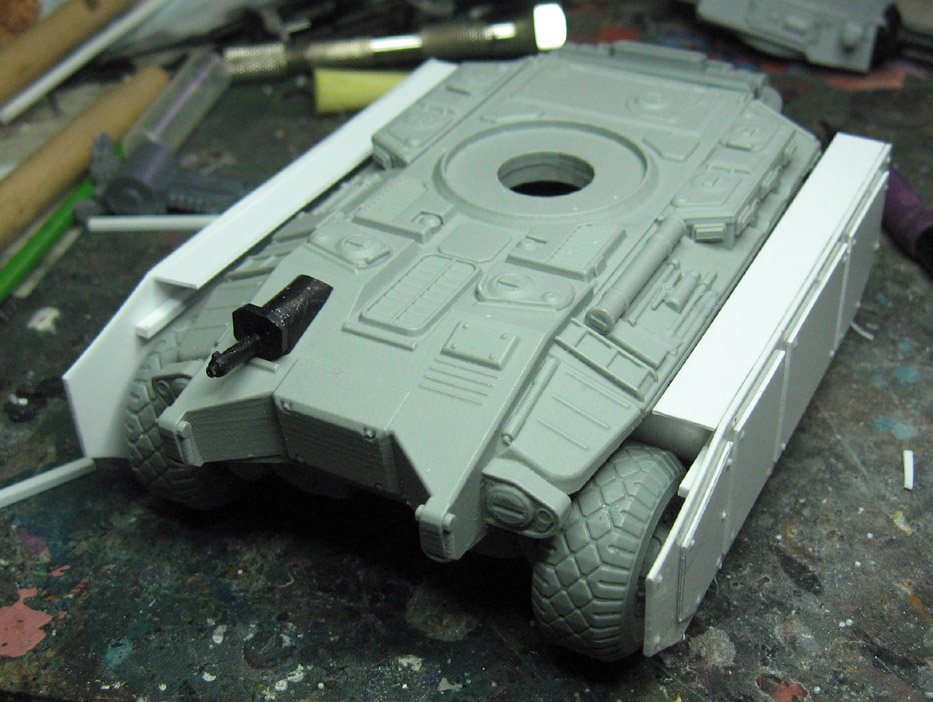 This was my favorite detail!  I cut two thin strips of plasticard and then used polystyrene tubing for the rungs of the ladder.  I wanted to mirror the ladder detail on the vehicle itself.

I added more details to the top plates as well, trying to carry the original vehicle details onto the spaced armor.  If I can find my Jerry cans, I will put those on as well! 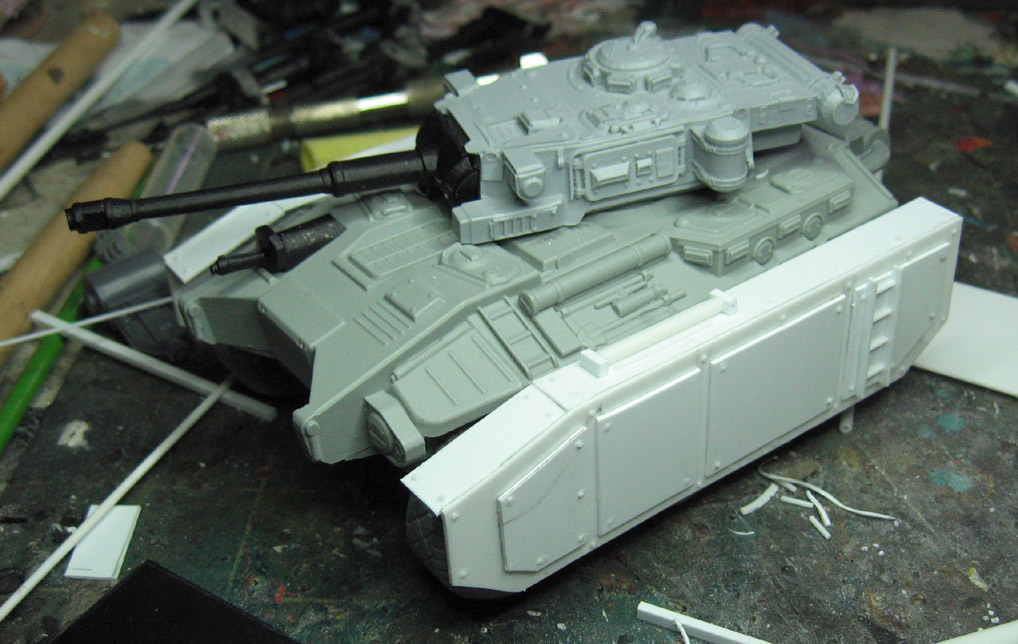 So, the main plates are finished.  I am adding a few more touches, including some actual battle damage for the painting videos.

I am also creating some magnetized heavy bolter sponson weapons, so that this could be a Leman Russ. 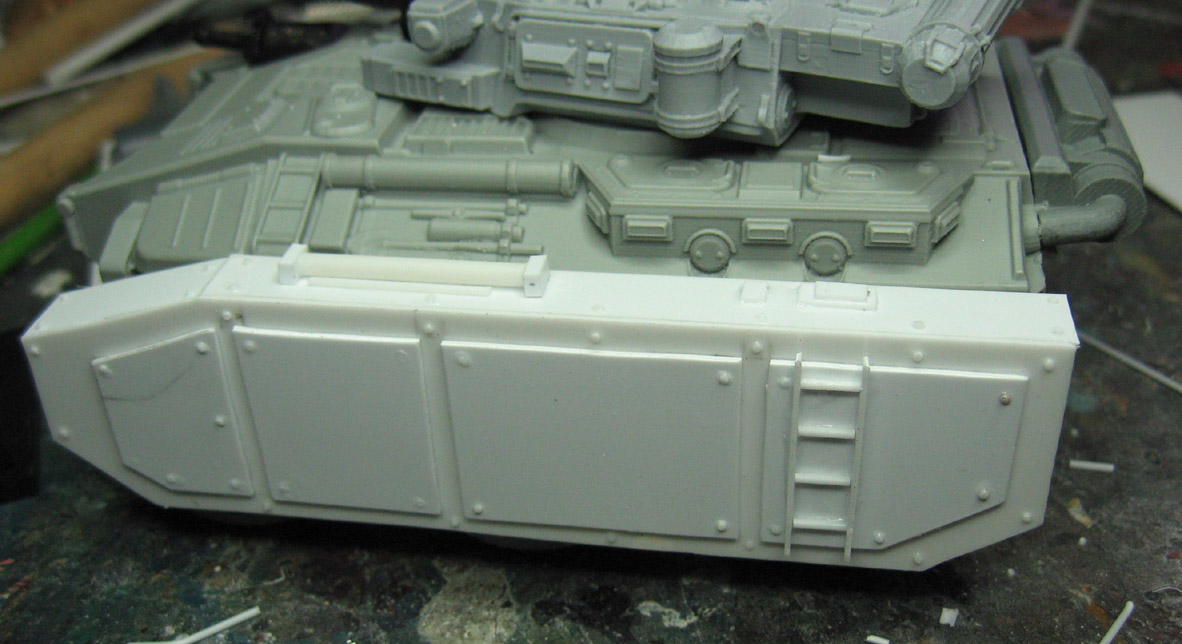 Posted by wappellious at 5:02 AM 2 comments: