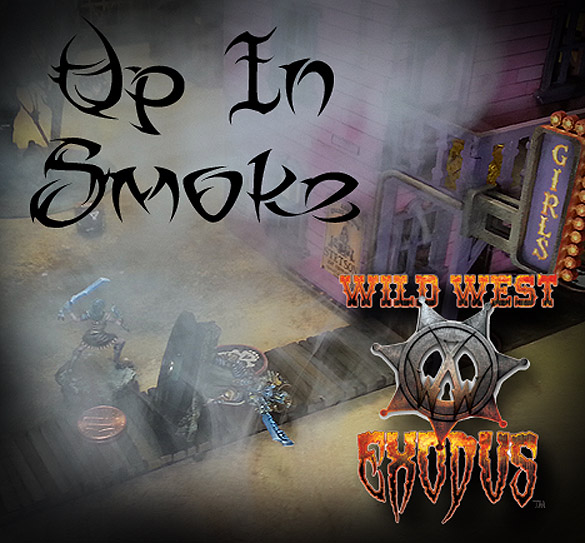 When we last left our heroes. they were struggling against the River Gals, who mysteriously knew in advance that the Holy Order of Man would be in town.

Since surprise is a staple tactic of the Order, they would be at a major disadvantage in this fight.  Old Man Abner (aka Crazy Louie to the townsfolk), had instructed his team to advance as rapidly as possible to the buildings across the Main Street.

As they did so, The Enemy revealed itself, and his unnatural influence over the River Gals began to take hold.

One of the K-9 beasts was detonated by Billie, injuring a number of Spica, who had joined in on the combat. 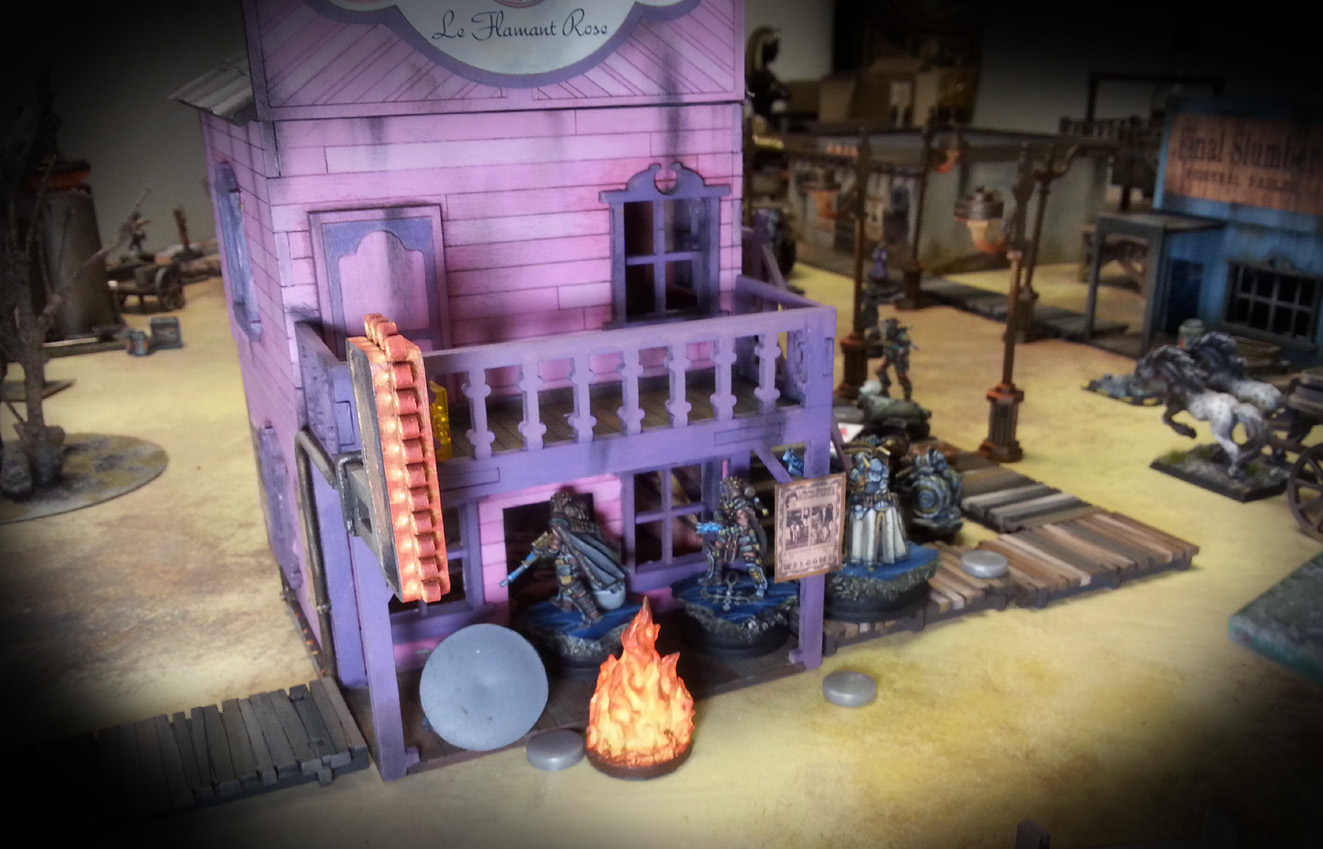 A 'gathering' of Spica (that is, more than one in the same place at the same time) was ordered to move to the Jail, as that would offer a much better option to fortify than the wooden Final Slumber Funeral Parlor.

Altcap Oron managed to immobilize the Flame Truck, preventing its use as a building emptying threat.  However, it now served as a handy forward bunker for the characters inside!

At this point, Roberta Younger jumped out of the vehicle and set herself upon one of the running Spica.  Despite his grueling training process, he was little match for her blades.

She appeared to have supernatural speed.  Some citizens in the town swear that they could see the robed figure put an evil grin on his otherwise sinister face as this happened. 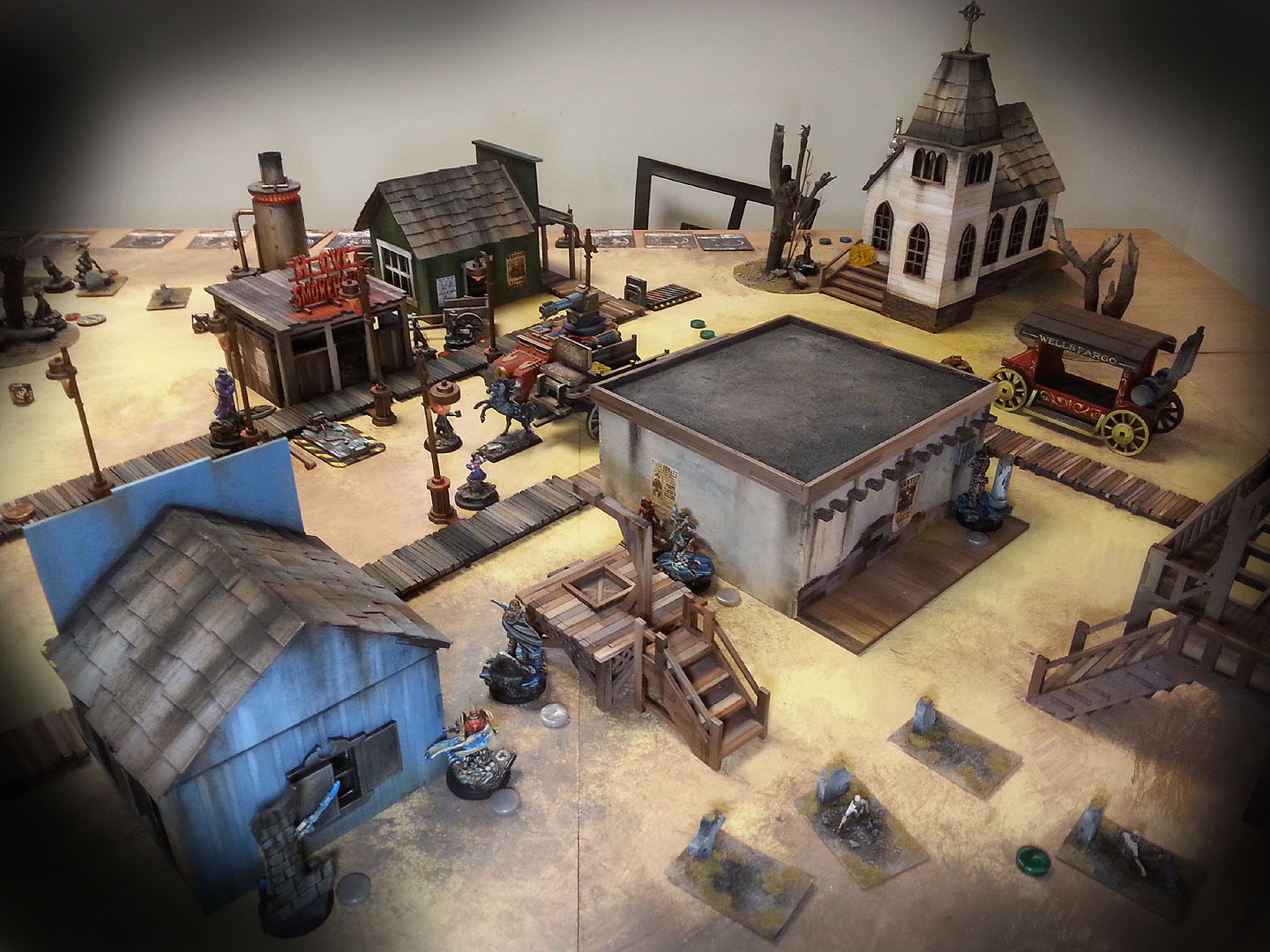 Disaster would strike in front of Miss Fannie's establishment, as the K-9's had prevented the Spica from entering the building, and avoiding long range fire.

Missy Copelie dropped a devastating fire template right into their midst, killing two of them!! 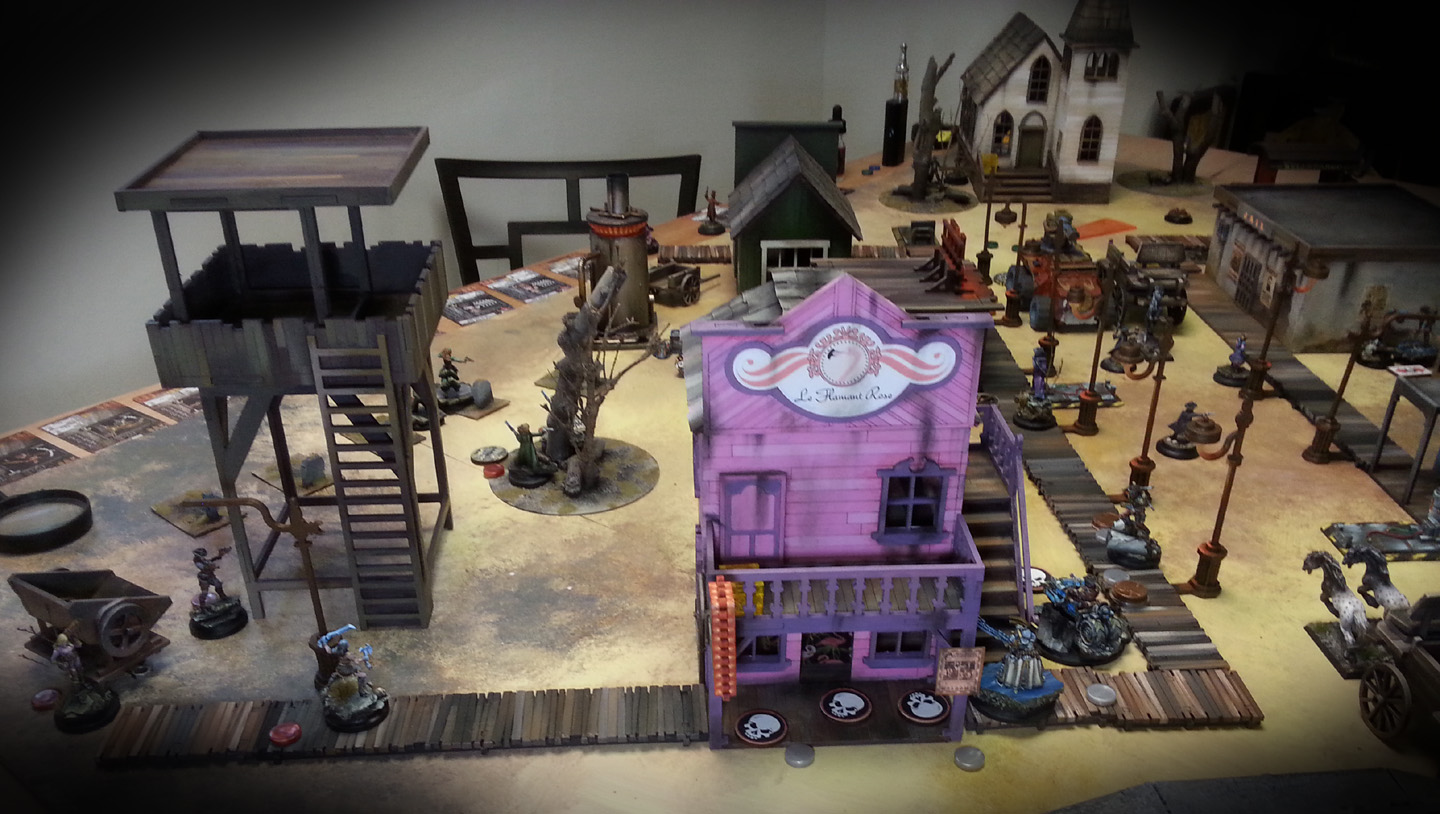 With most of the Spica already dead, all that remained were the Heroes of the Order.  Ignoring the fire burning his robes (a poor fashion choice in this particular fight), Altcap Siraj was left with no other choice than to charge the badly injured Flowing River. 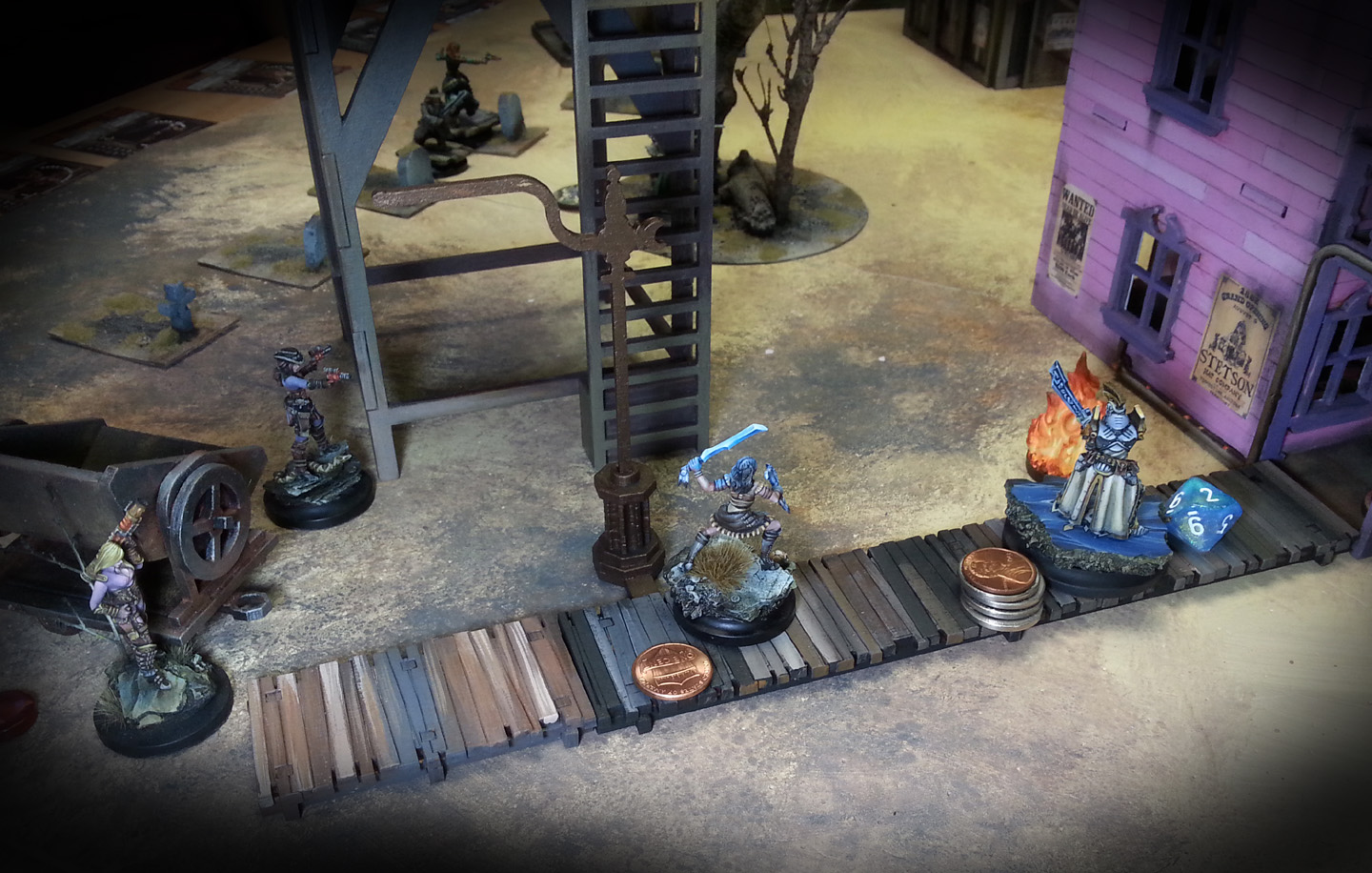 Once again, each of his strikes had no effect whatsoever.  The Enemy was indeed at work here!!

If he could take down the injured member of the Wayward Eight gang, he might be able to finish of Missy as well, ending that long range threat to the other survivors. 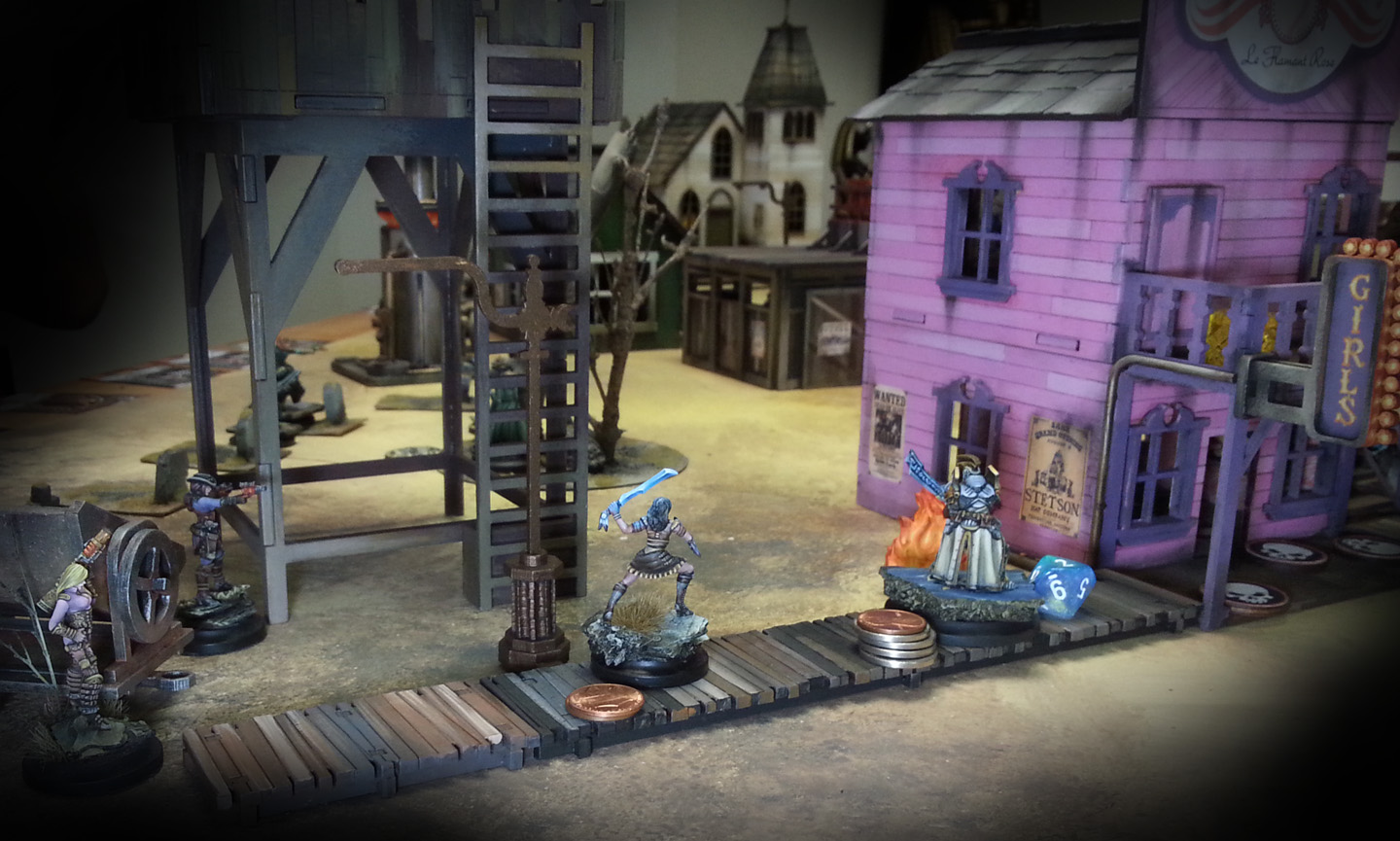 The bodies of dead Spica now lined the streets.  It would be essential that their ritual blades and other arcane relic weapons should not fall into enemy hands... 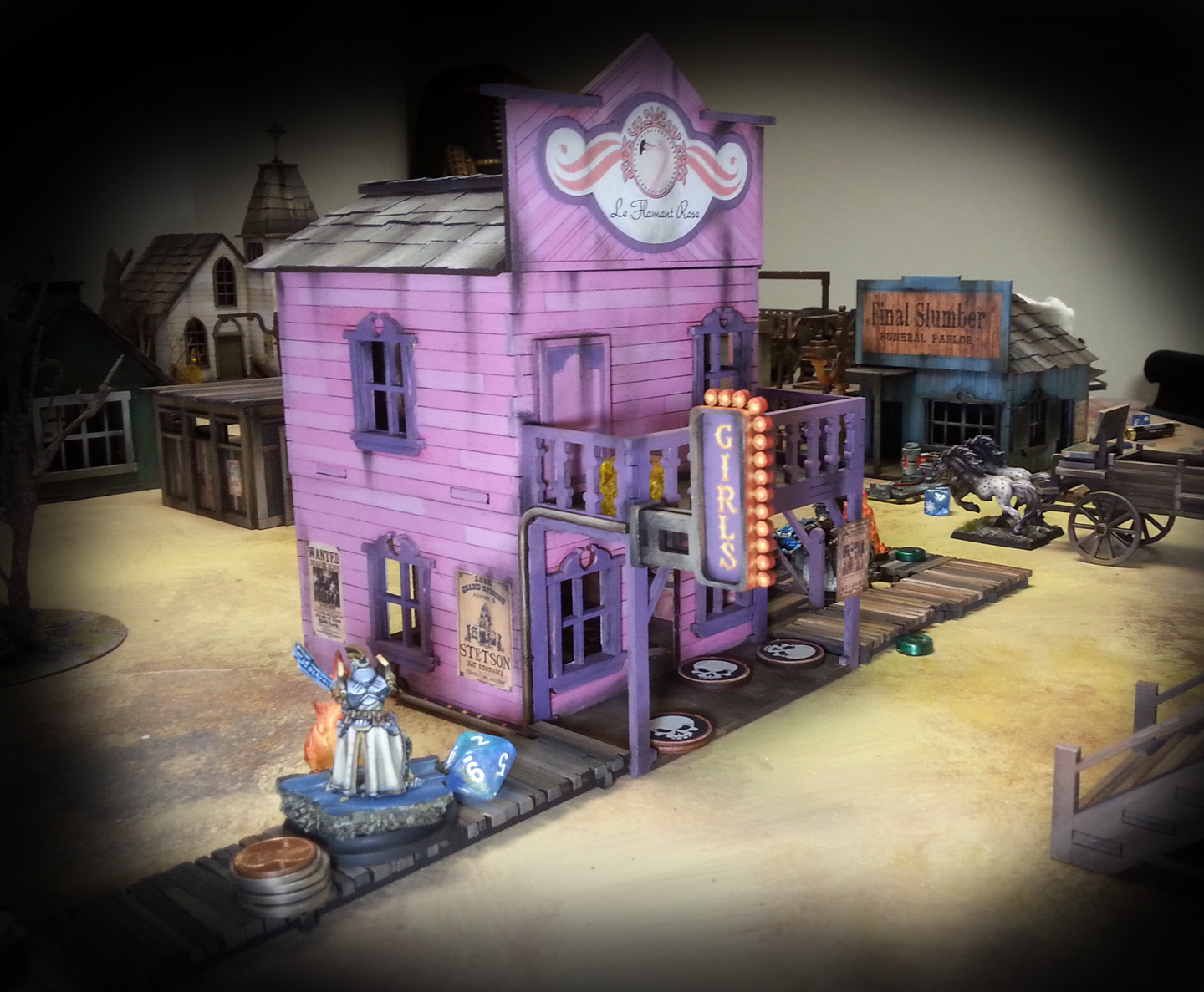 It was at this darkest of moments that the citizens of Wappelville saw who they still swear was Crazy Louie kill Roberta with his Luminant Staff and march toward Billie in a final showdown.

Crazy Louie was certainly better dressed than the townsfolk had grown accustomed to. 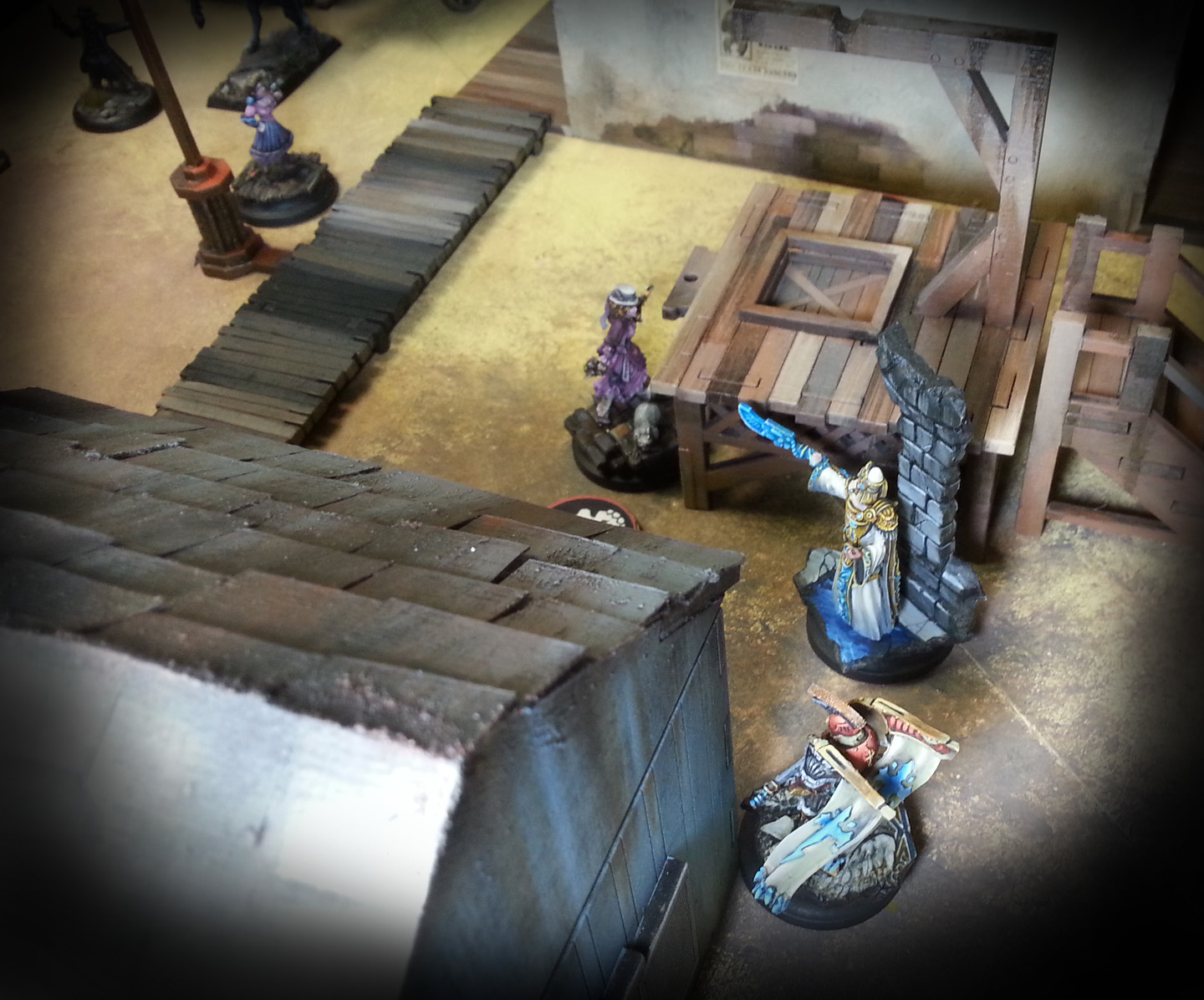 The Spear of Light had managed to extract itself from the deadly combat with the other K-9, but the rider knew that death was close at hand.  As a final act for the Order, he targeted Missy, nearly killing her.

Yet again, some strange force kept her alive!  Surely any human would have been obliterated by the blasts that landed directly onto her!!

With all the fire weaponry being used, smoke began to fill the streets.

In the glow of the RJ lights, this became known as The Blood Fog. 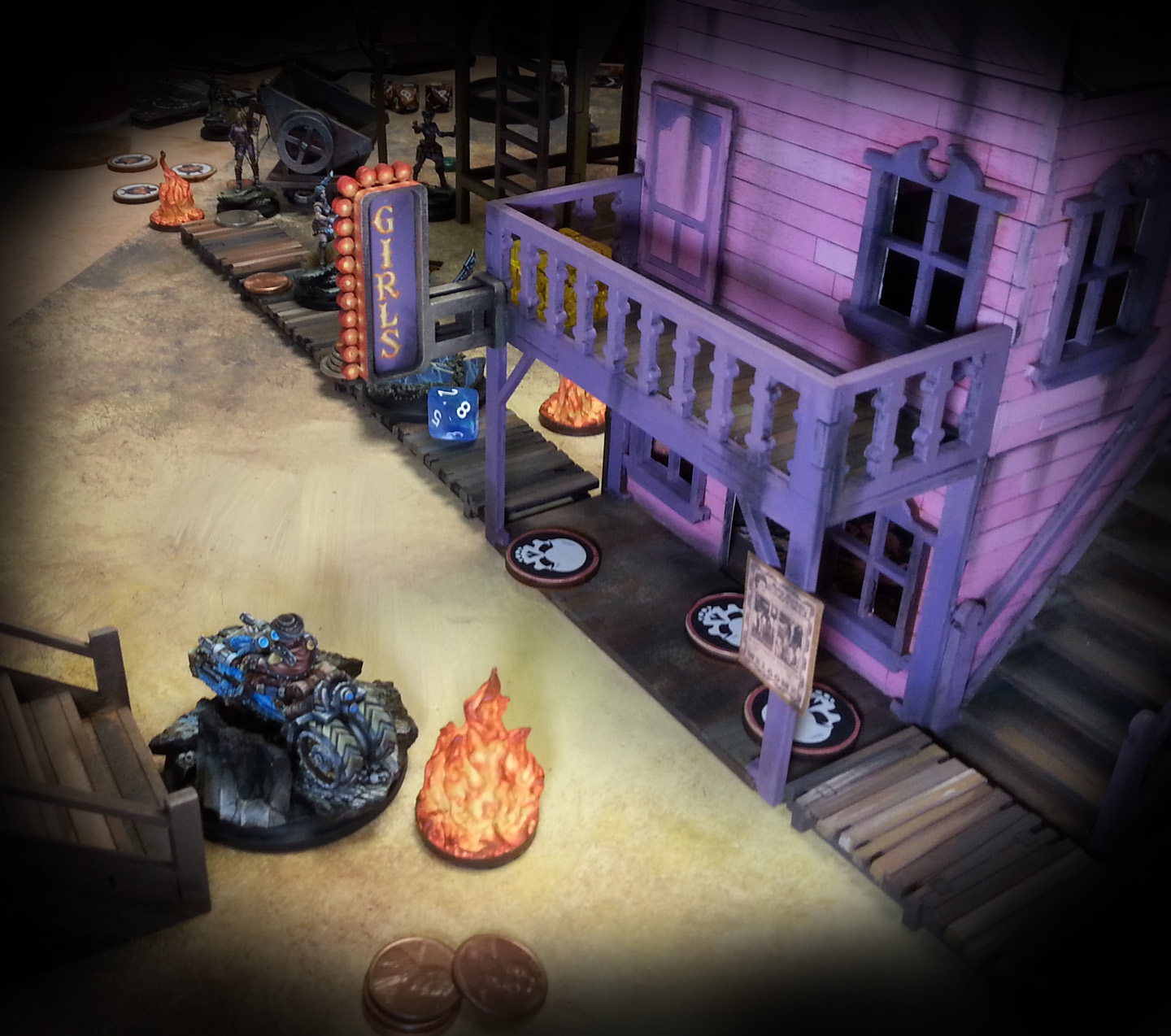 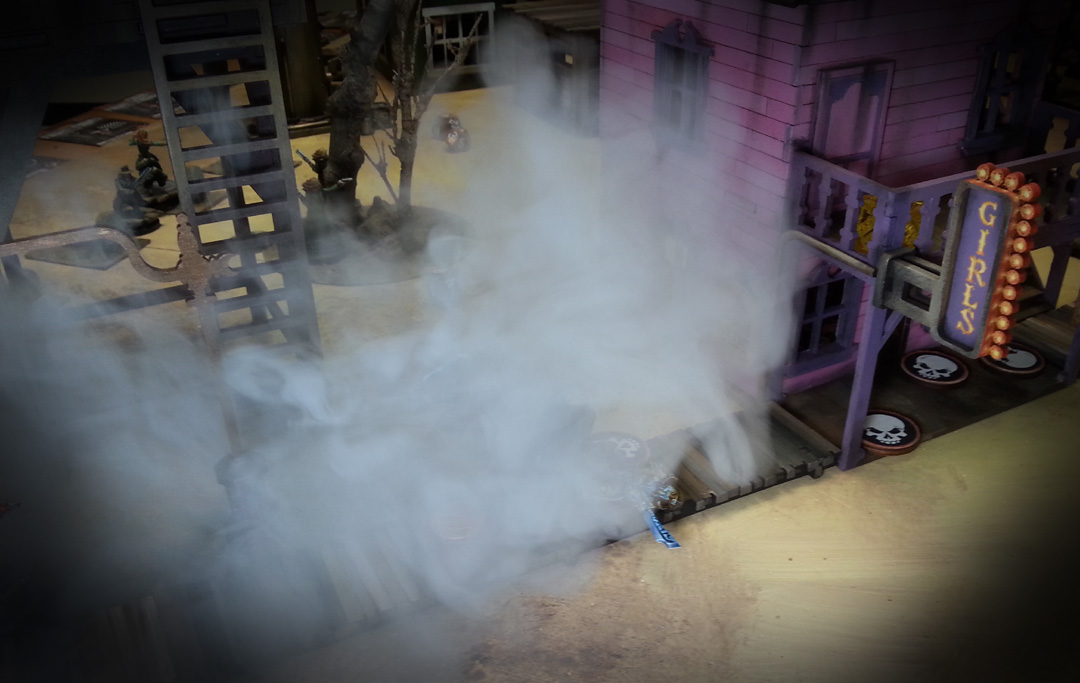 But he would not come out alive.  The Enemy guided Flowing River's hand, and she struck a mortal blow to the Atlcap.  The poison was not needed, as Siraj's head rolled across the ground.

This was a true catastrophe for the Order.  Will new heroes rise to take the place of those who sacrificed themselves this day?

Would the River Gals continue their rampage through Wappelville?

That is a story for another day. 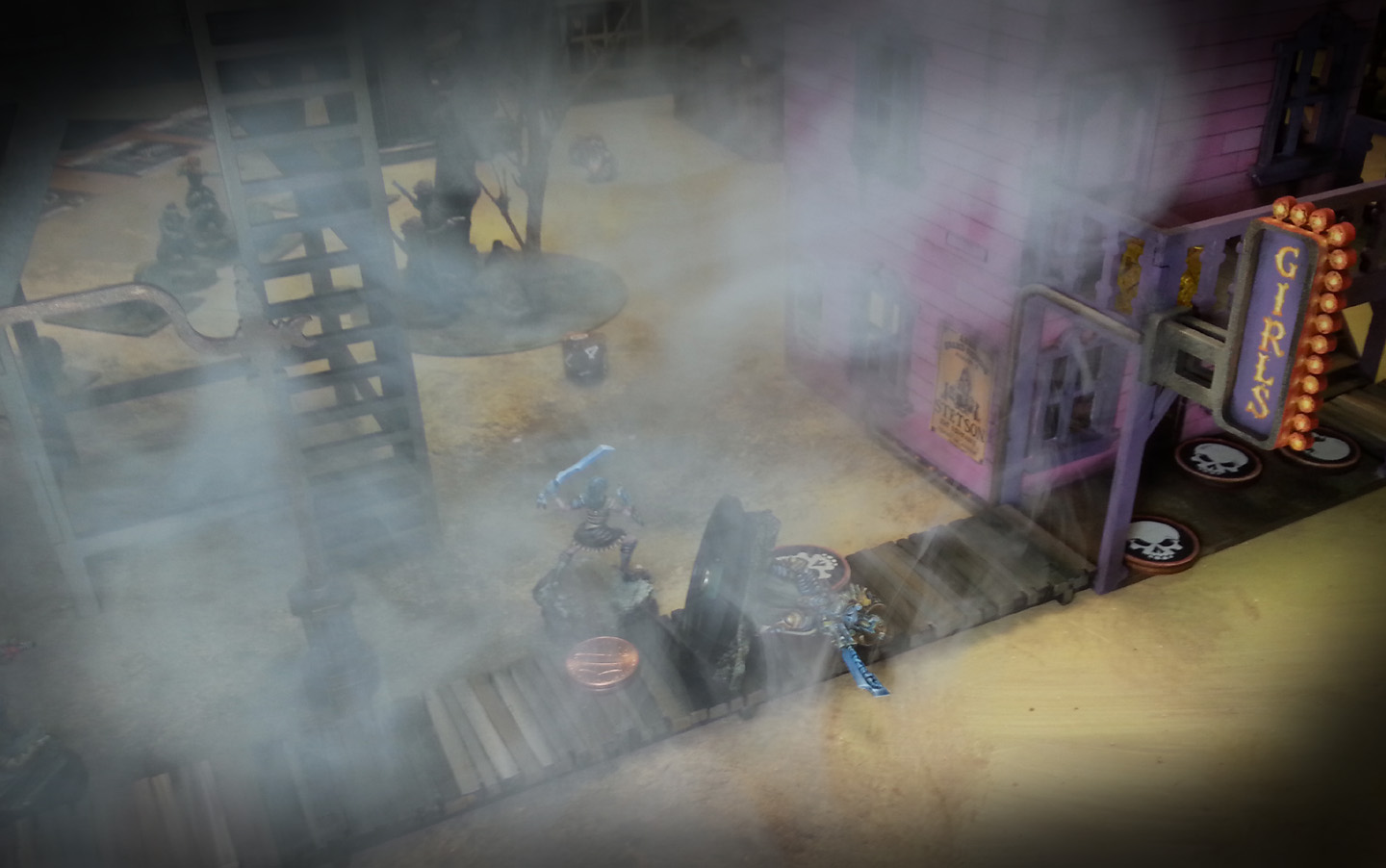 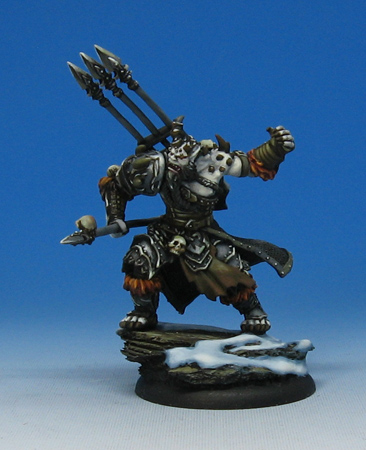 I have painted a lot more Privateer Press figures this past year than my previous 14.  Legion of Everblight seems to be the theme. :-)

These are some of the older metal versions, so they are pretty hefty!

More to come, along with some winter theme terrain... stay tuned!!

Posted by wappellious at 1:18 AM No comments: