Playing in the dirt... 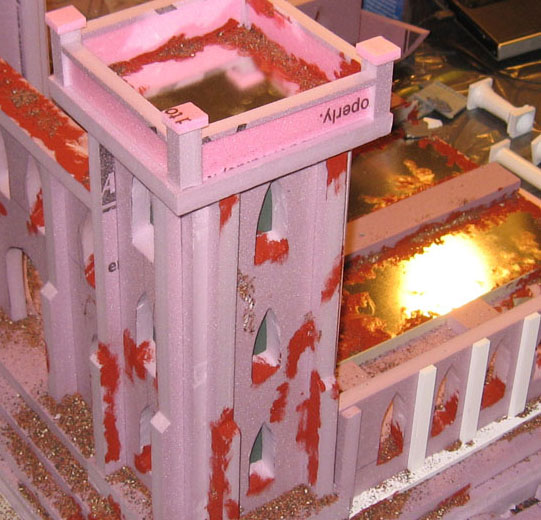 This view focuses on the broken corner where the Raider will go.  You can see that I put a few sheets of metal there, held in place with oxide paste.  I also placed a few pieces of broken vehicle in that location.  I had saved these pieces when I made all the Grotesque bases and the Raider, so that there would be a sense of similarity.

If you look closely, you can see that I took the window cut outs and used that foam to make the broken stones... 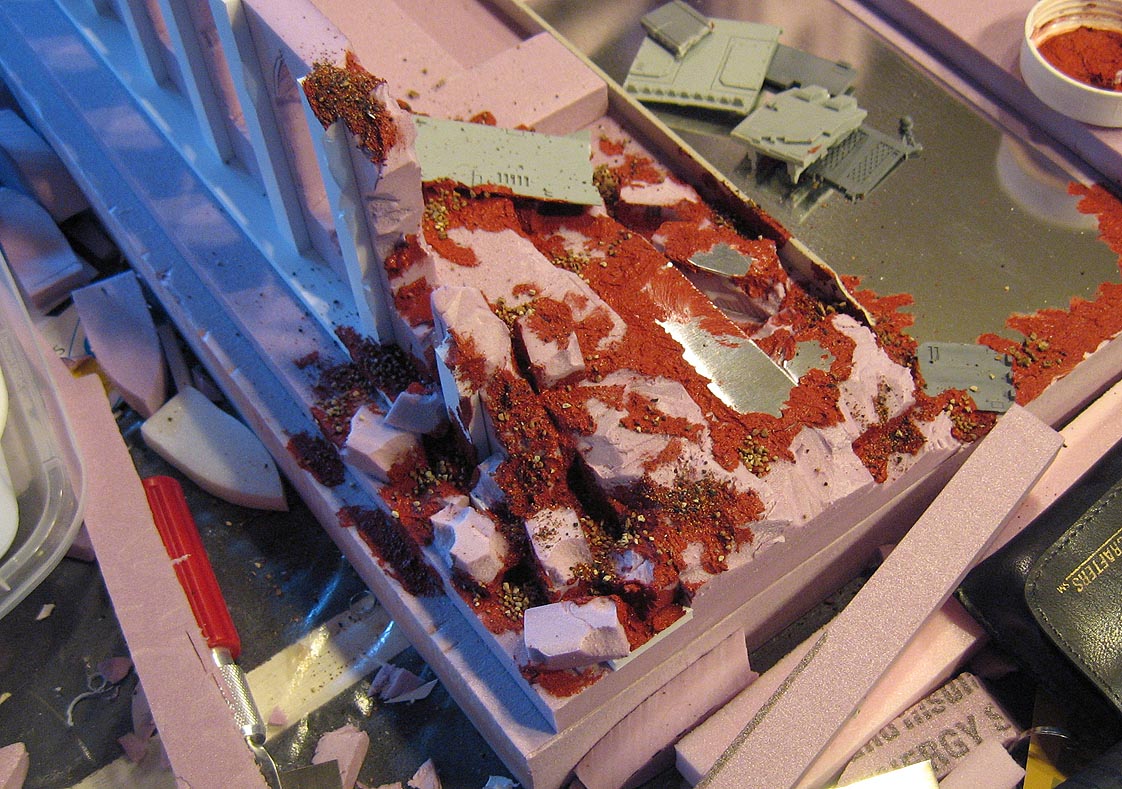 As we expand outward, you can see the oxide paste is being used to cover the big sheets of metal on the track... 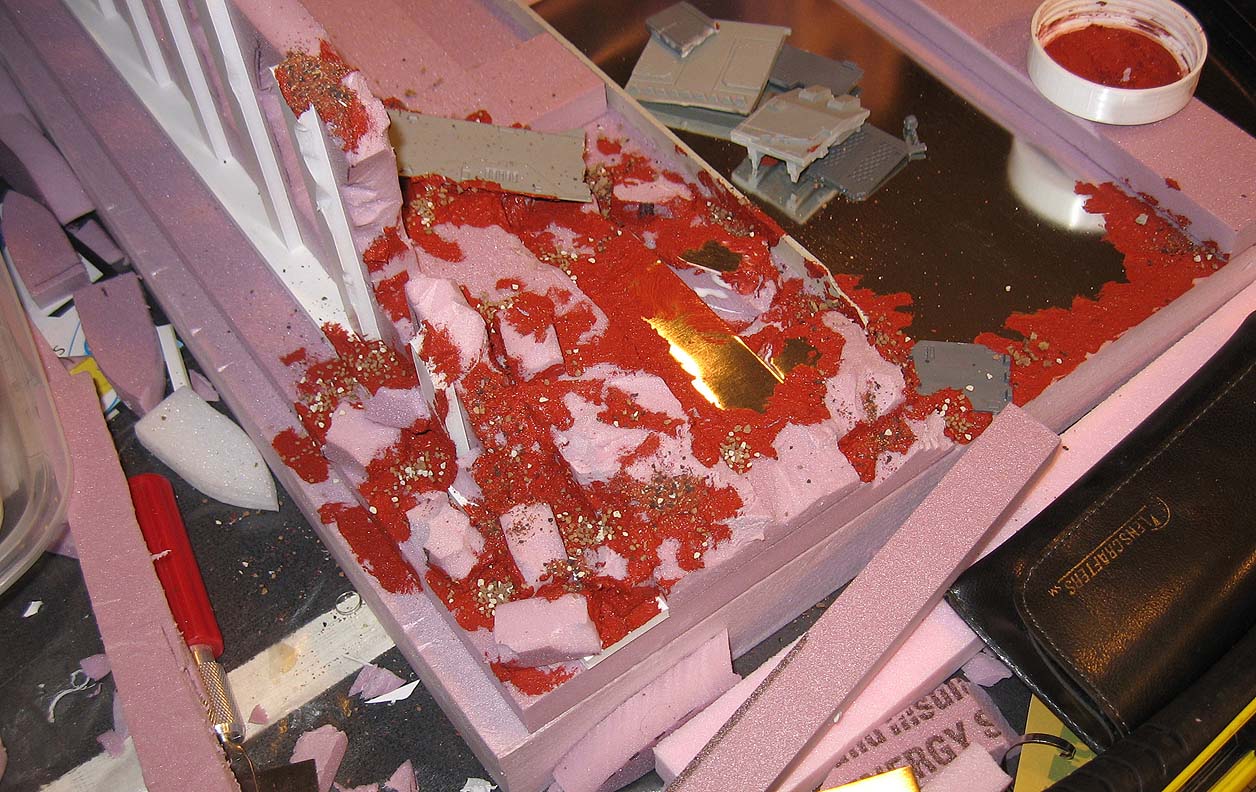 Expand even further, and you see the whole track now secured with the oxide paste.  The rocks and gravel have been added to the interior. 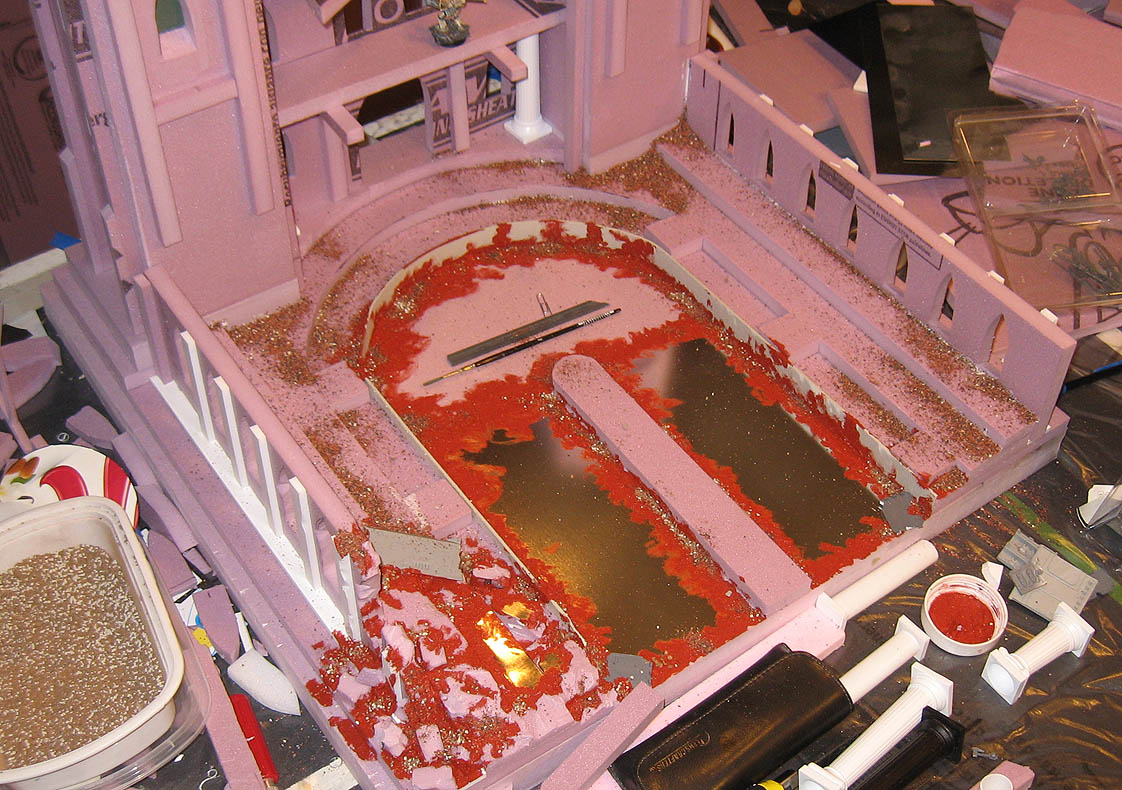 More oxide paste, more rocks and gravel.  I used the oxide paste to cover any major gaps that might appear on the decorative elements and to secure the metal sheets to the tops of the towers. 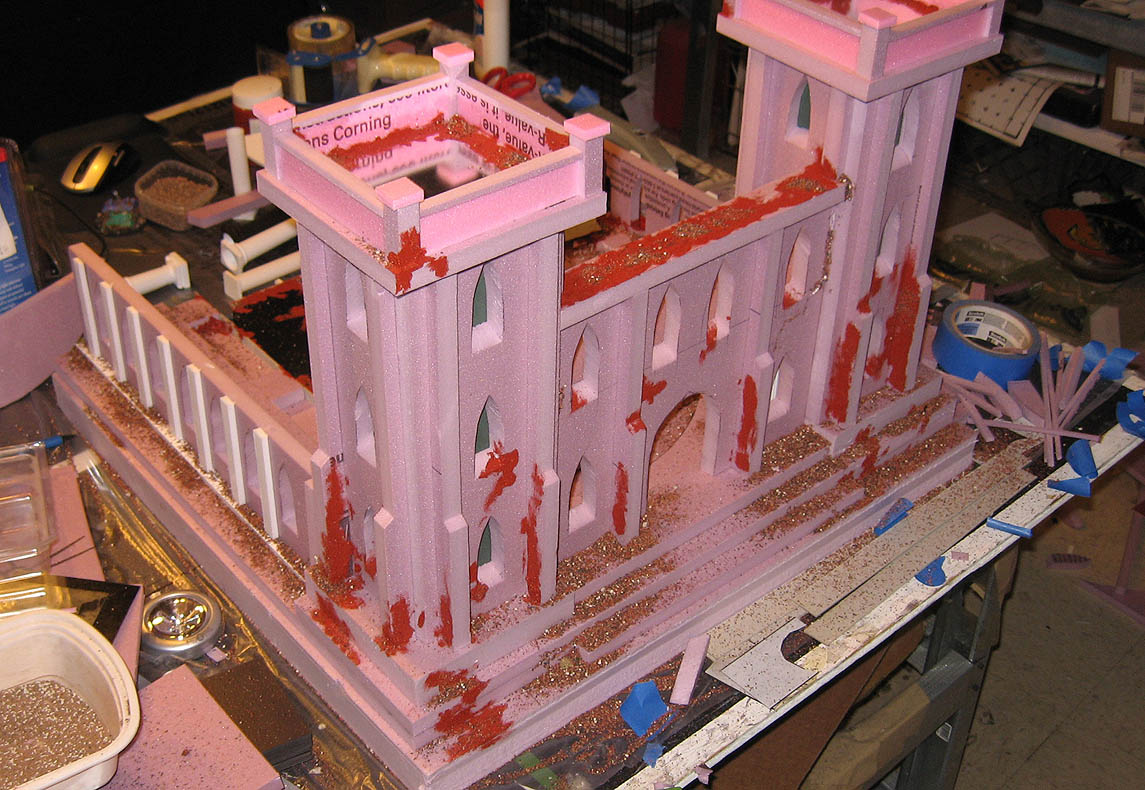 Remember the modular construction of the walls?  I did the rocks and gravel on those pieces at this time.  When it came time to paint this, I was incredibly glad I chose that approach!!!! 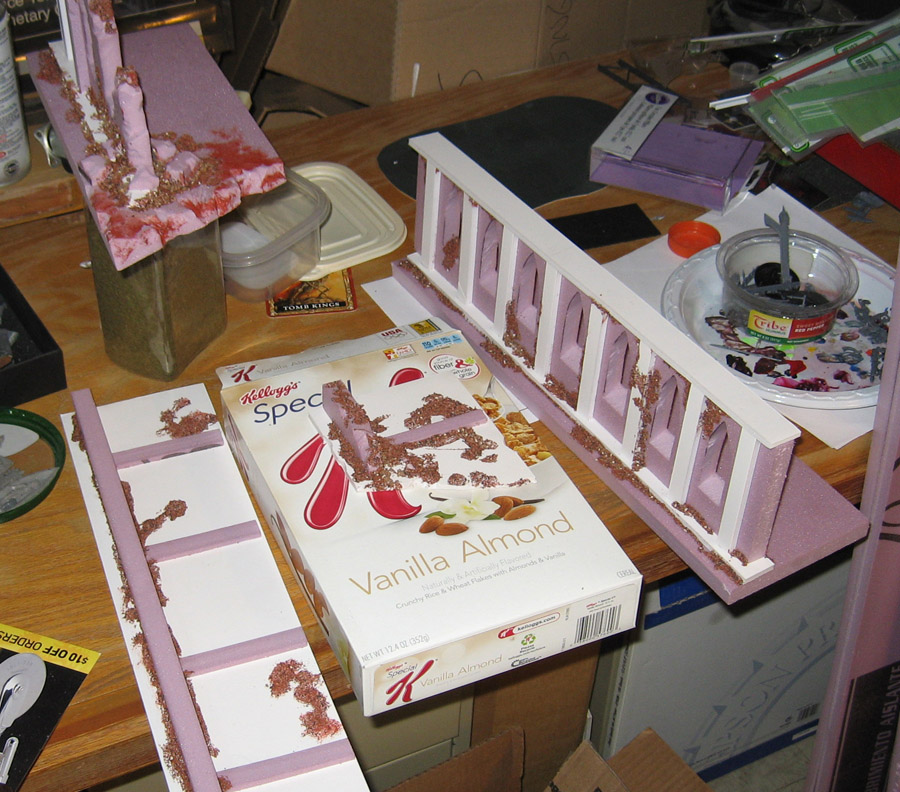 Another look at the structure as I let everything dry and set.  I thought it was a better idea to let that all settle before I did the final weathering. 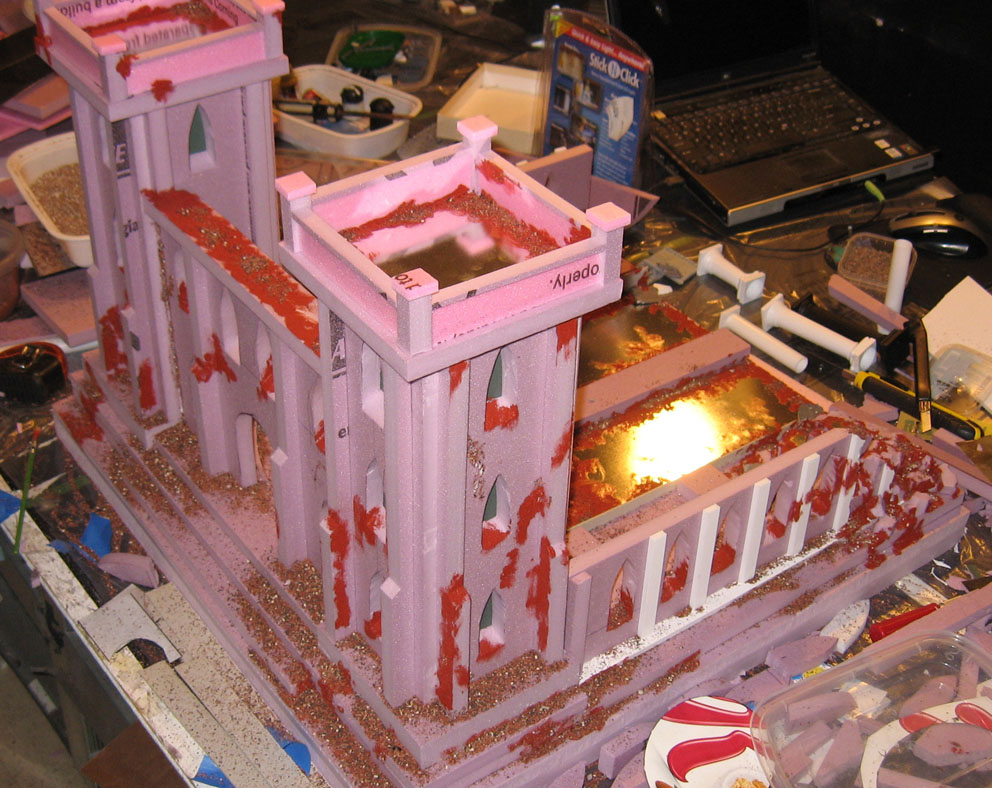 Now we have some shots just before the painting would begin.  I took my very sharp exacto knife and made all sorts of blast effects.  If you look at the ruined cathedral posts and the 40k fortress, you will get a good idea of how those pockmarks were made. It took a while to work my way all around the Basilica. :-)  I also chipped away at corners, attempting to create a pattern where some of the damage was more concentrated than others. 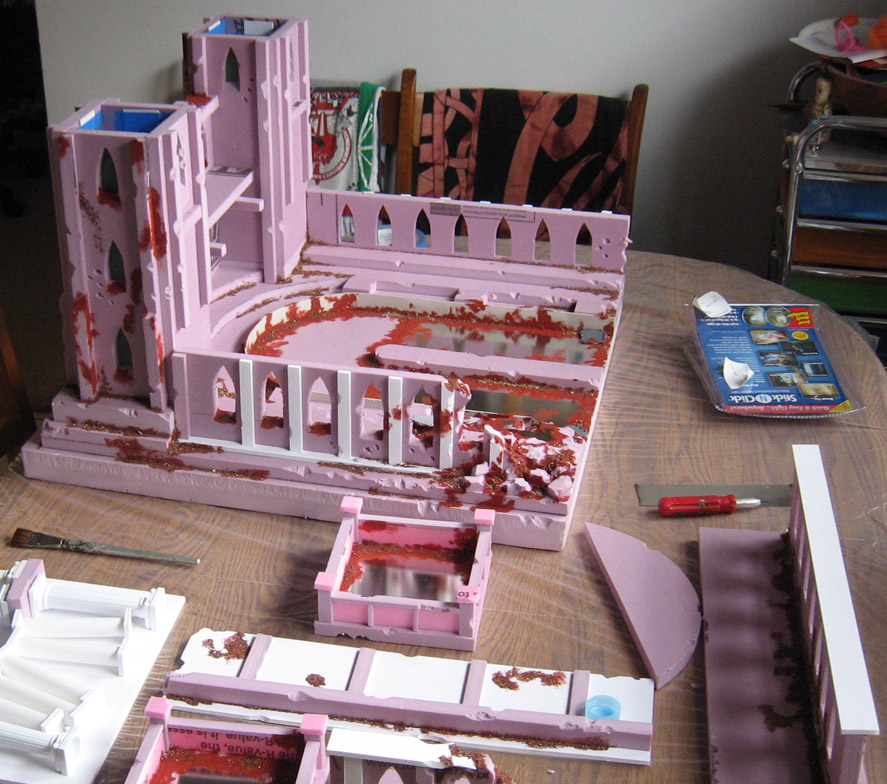 You can see some of the chipping on the front side of the structure in this image.  At long last, it's time to get out those paint brushes!!!!!!!!!!  Stay tuned... 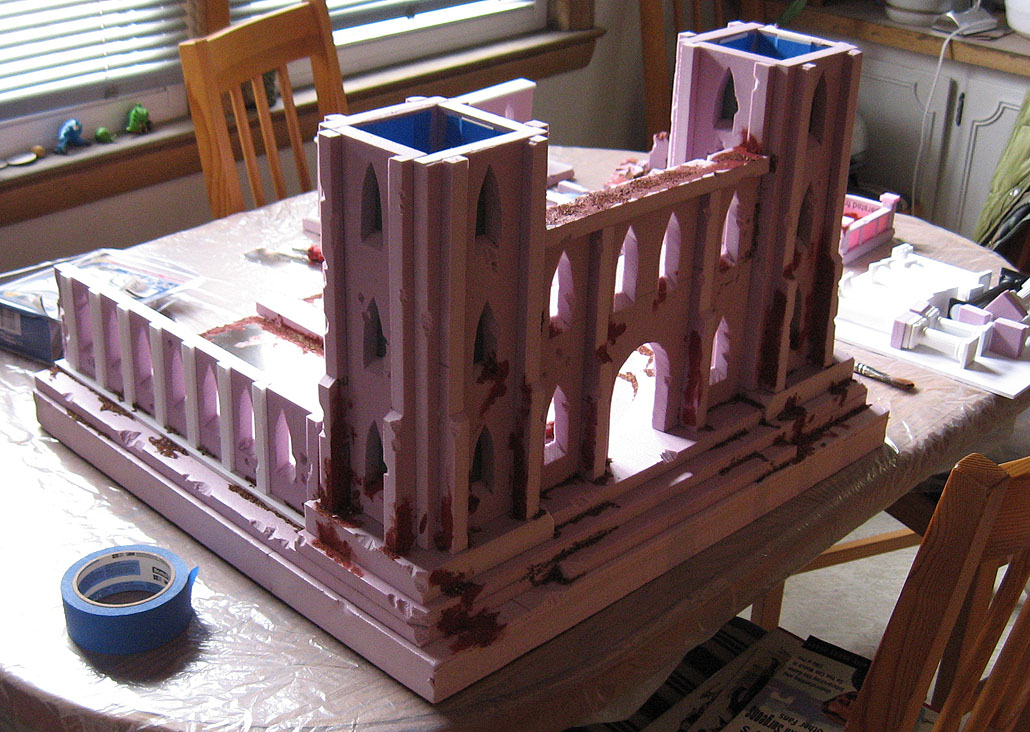 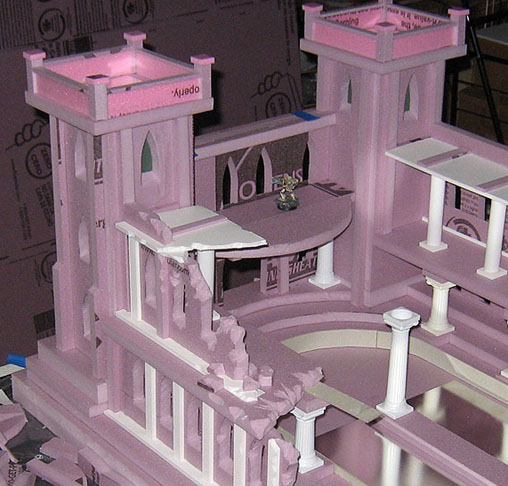 Back to the Basilica Canus!  Here are some more images of the interior and the build-up of the walls.

I knew that I was going to have to reduce at least one of the walls to rubble, for a few reasons.  First, I would need a large, flat area for a vehicle such as the Raider, which was going to have a long footprint.  In addition to the extra room for placing the transport, it would get some more light into the area.

The tournament room was going to be very dark, as we all know, which put any light at all a premium.  This would also make it appear that there was fighting going on, just like the story. :-)

Using the weathering techniques I learned on the ruined cathedral, I hacked away at it with the super sharp exacto knife.

You can see that I am 'clearing a path' in this image. 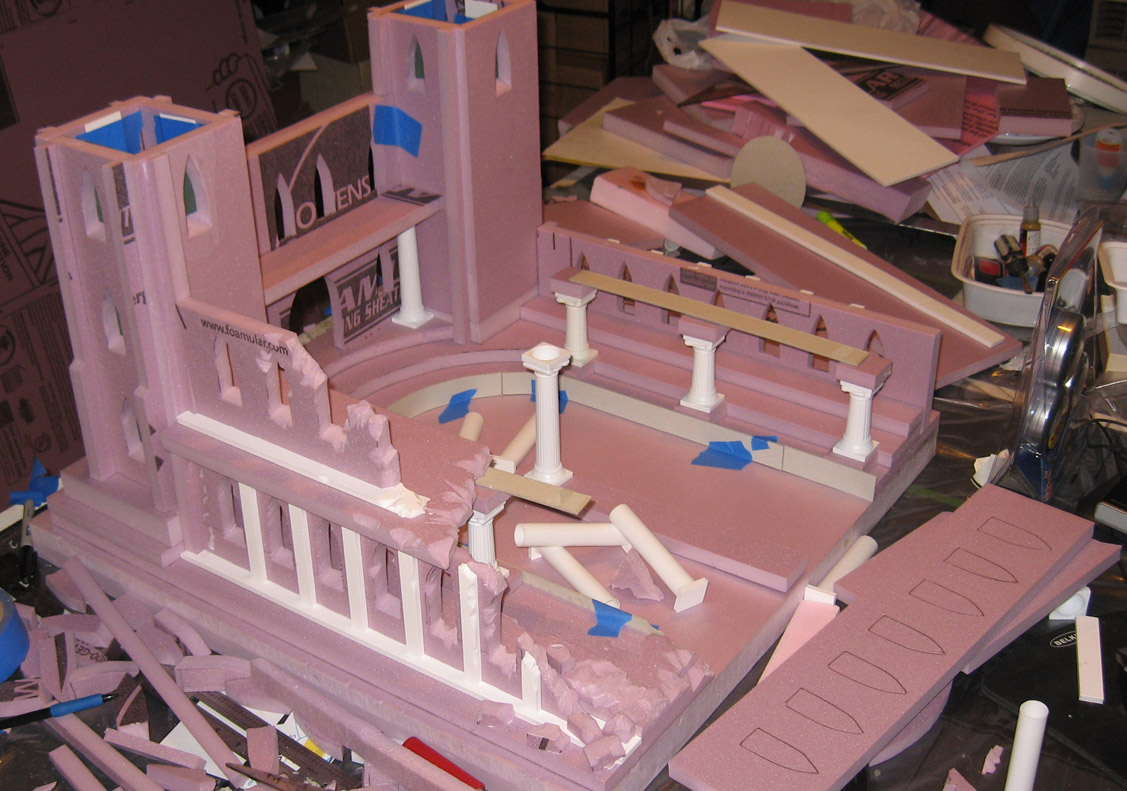 Another view of the now reduced wall. 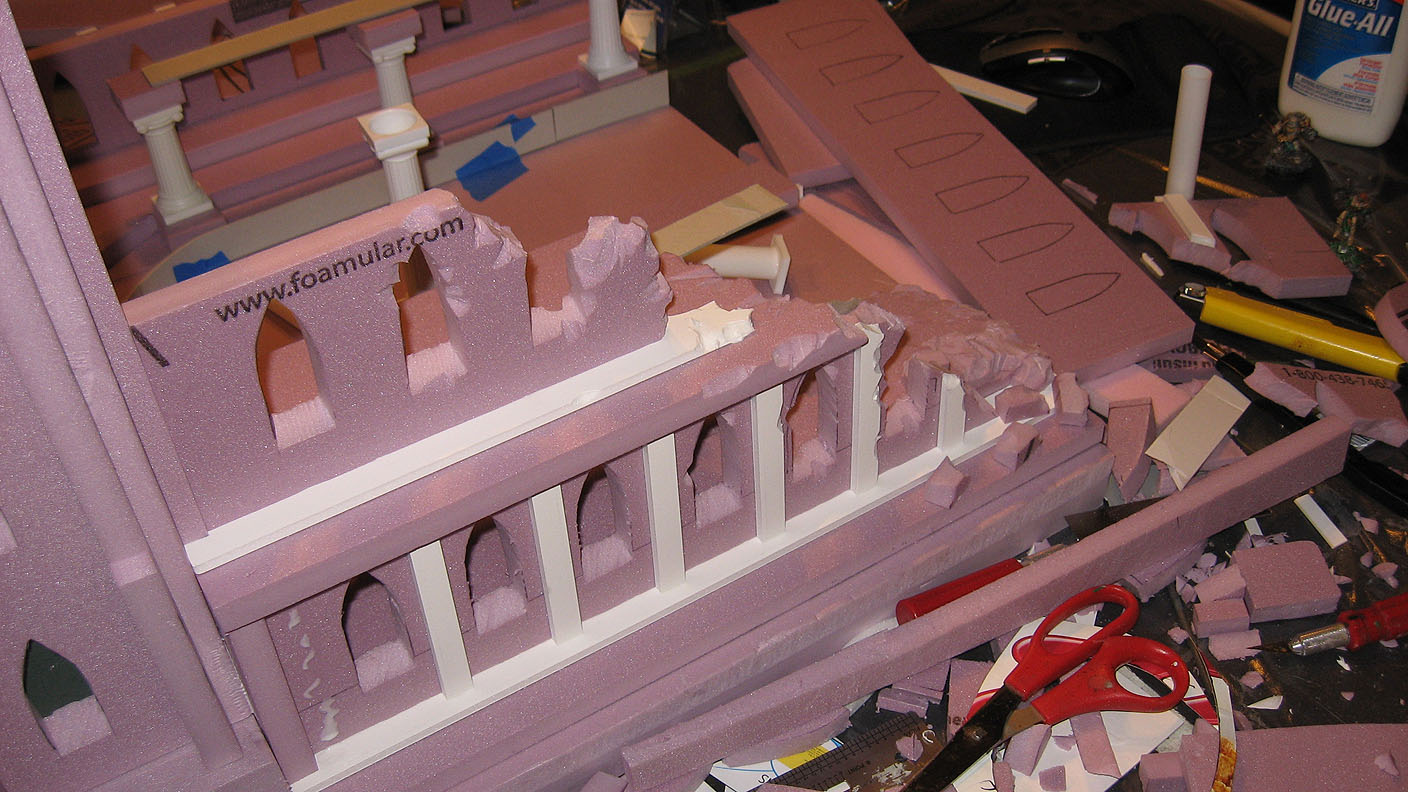 I chose to keep the other side intact.  On this side, I wanted to have the freehand on the walls and floors to match the bases..  Plus, if I get the chance to build the other side of this board for racing, I want some of this intact to connect the two halves. 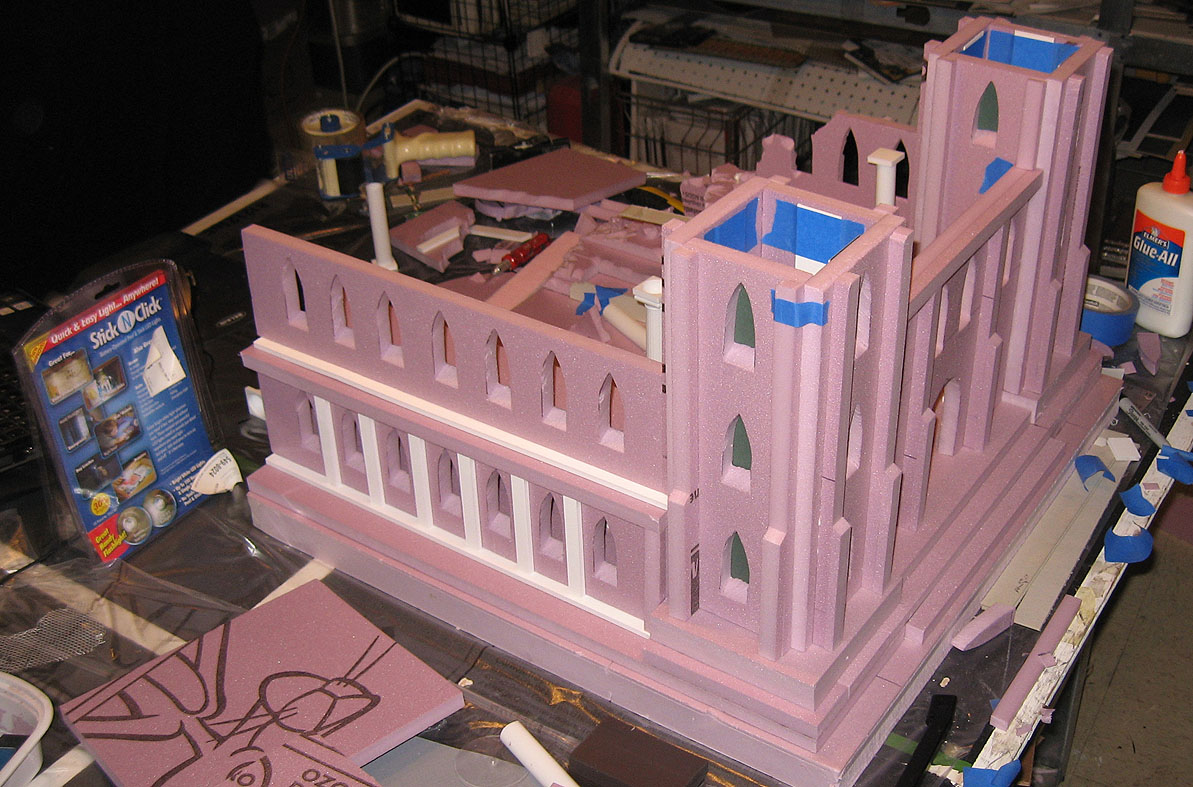 You can see the extra decorative pieces added to those walls to give them some substance.  I am also starting to lay out the fortified tops of the towers, making sure there is enough room! 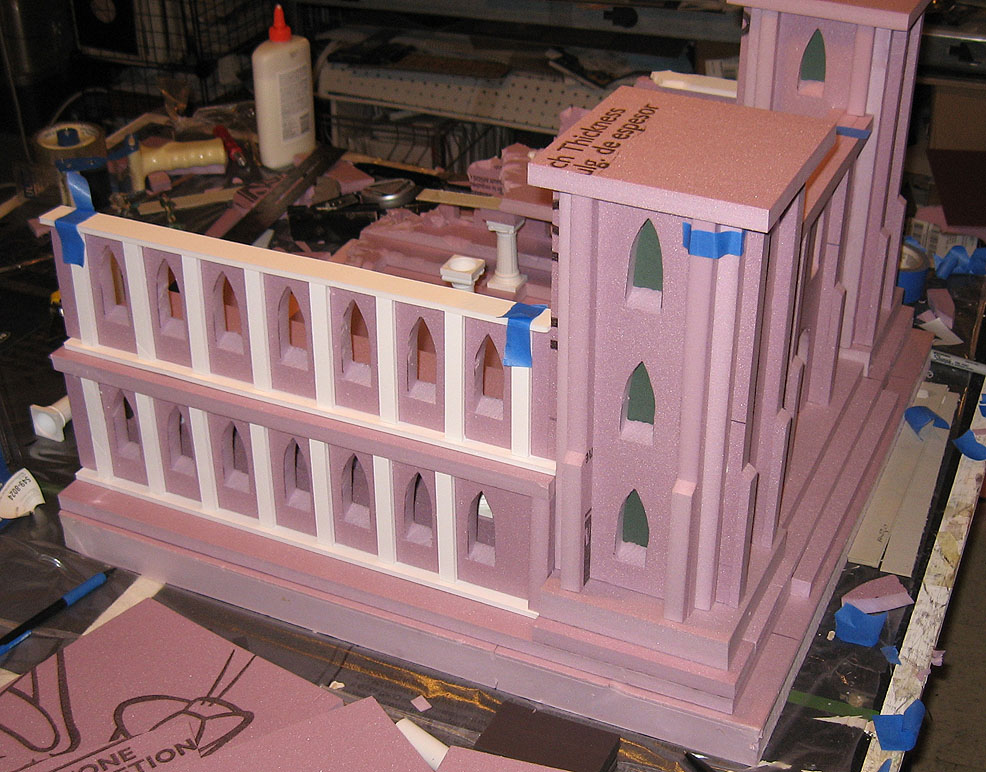 This picture shows the tops of the towers almost complete.  The metal sheets are in place, so that the magnets will hold things onto the board as firmly as possible!  Plus, the roof was added to the intact wall.  I had to make that section a bit wider than I wanted, so that the venom base would still fit.

My original thought was to make it shorter, so that light could get in, and that it would not be as hard to look down into the arena at the smaller infantry figures, and so on... 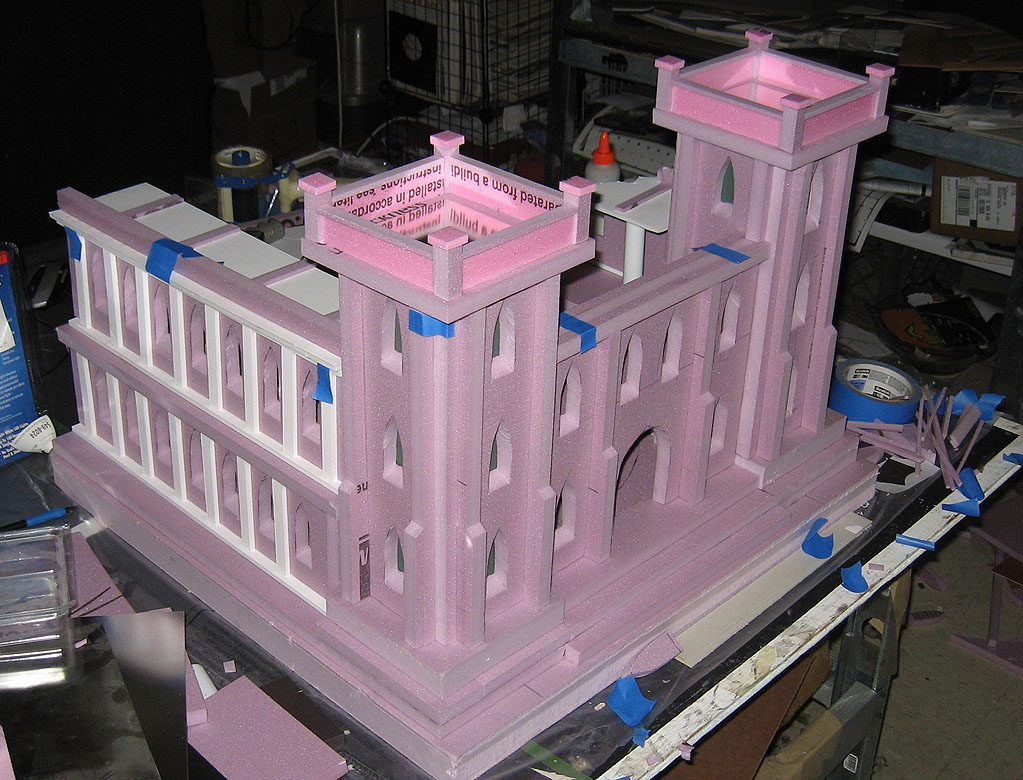 Speaking of magnetizing, this interior view shows some big sheets of metal that would hold the jetbikes.  There would be another big sheet on the curved section above the door.  That would have to hold the very tall venom with some heavy miniature riding inside.

Once all the sheets were painted with the metallic primer, it would have the texture needed to simulate the floor of the arena, while not interfering with the 'holding power'.

There is one last stage to the construction remaining.  The final weathering!  Stay tuned! 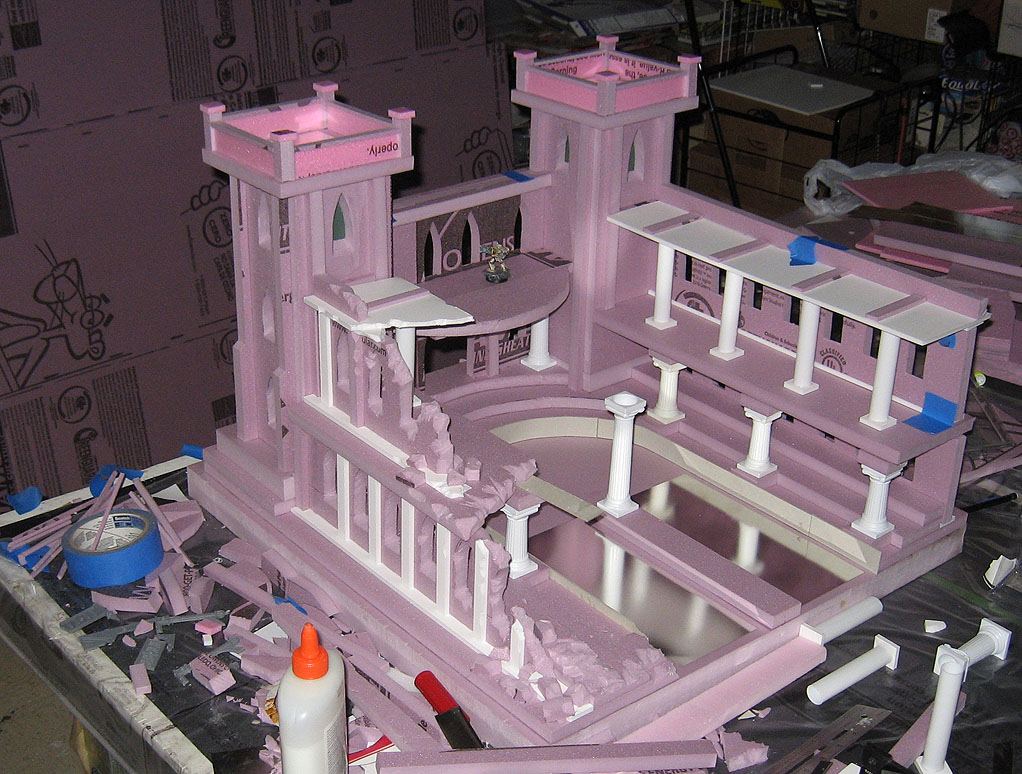