The city of brotherly love 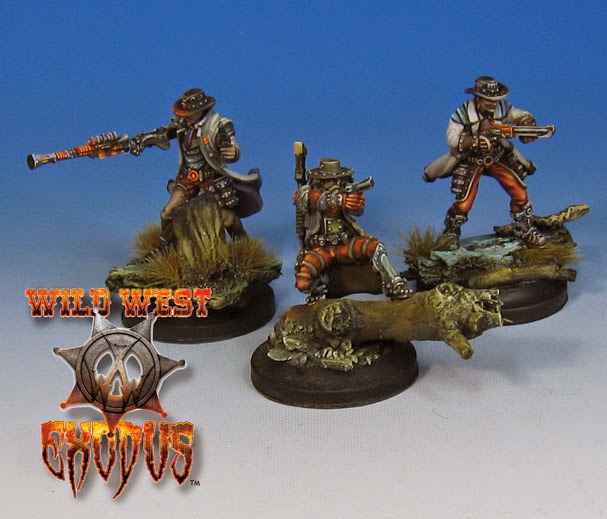 Well, that would definitely not decribe Wappelville, especially when this Band of Brothers is on your tail! 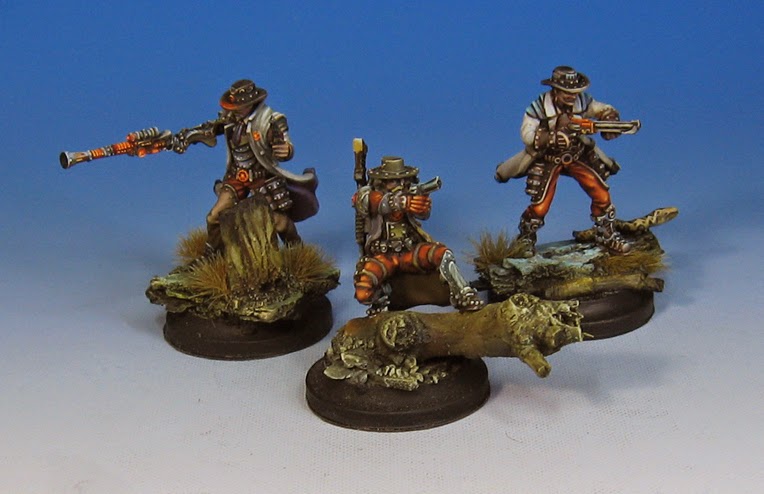 This is Wyatt, Virgil and Warren Earp, ready to lead the Lawmen in their quest to stamp out all crimes and misdemeanors in Wappelville. 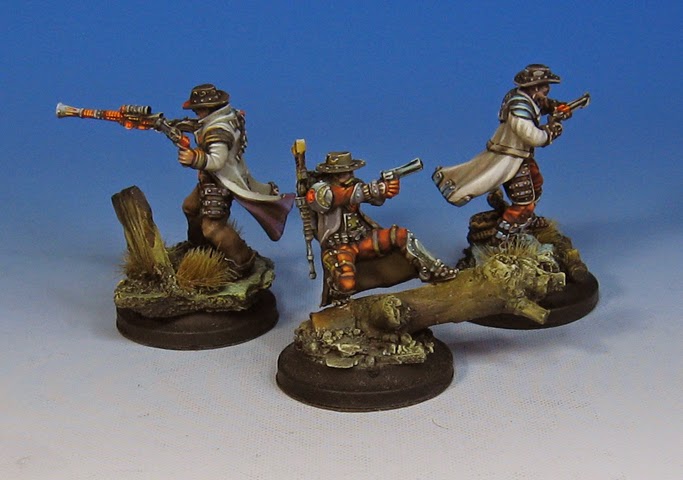 I went with the white coats to continue my color scheme for the army.  The Ghost Lawmen of Wappelville indeed... 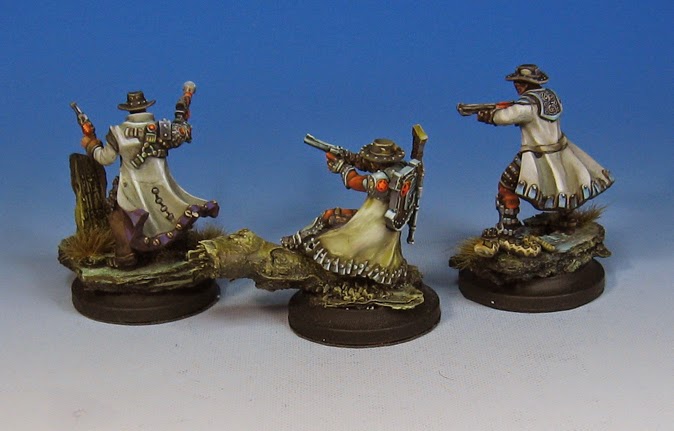 Each of them offers some interesting individual leadership attributes.  However, I am looking forward to a larger game where all three will patrol the streets of Wappelville together. 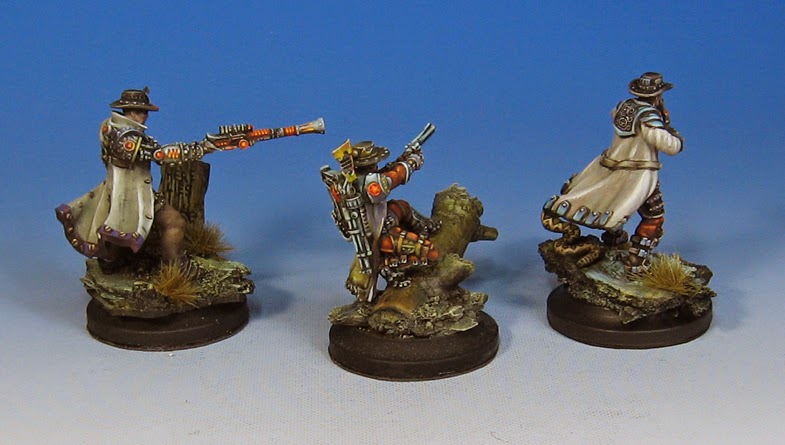 They stand in front of the Wappelville Jail, ready to administer the justice delivered by the gavel of Judge Stern. 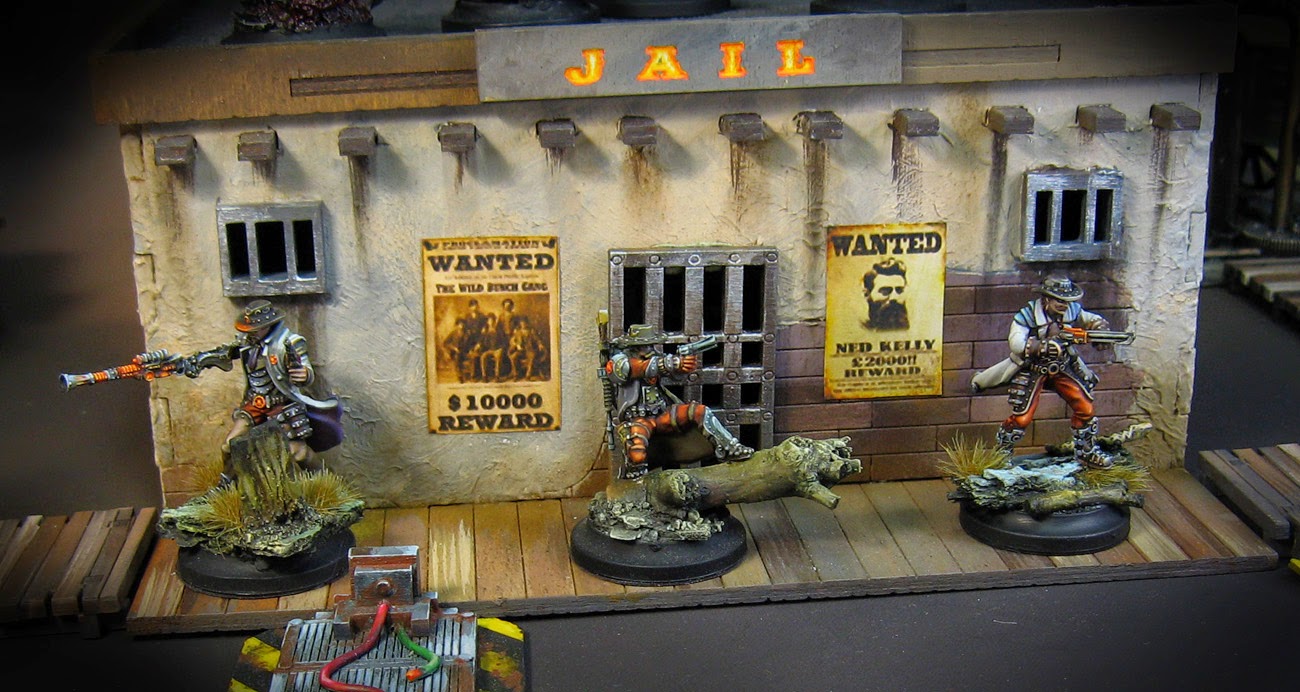 But the Earp Brothers do not stand alone... 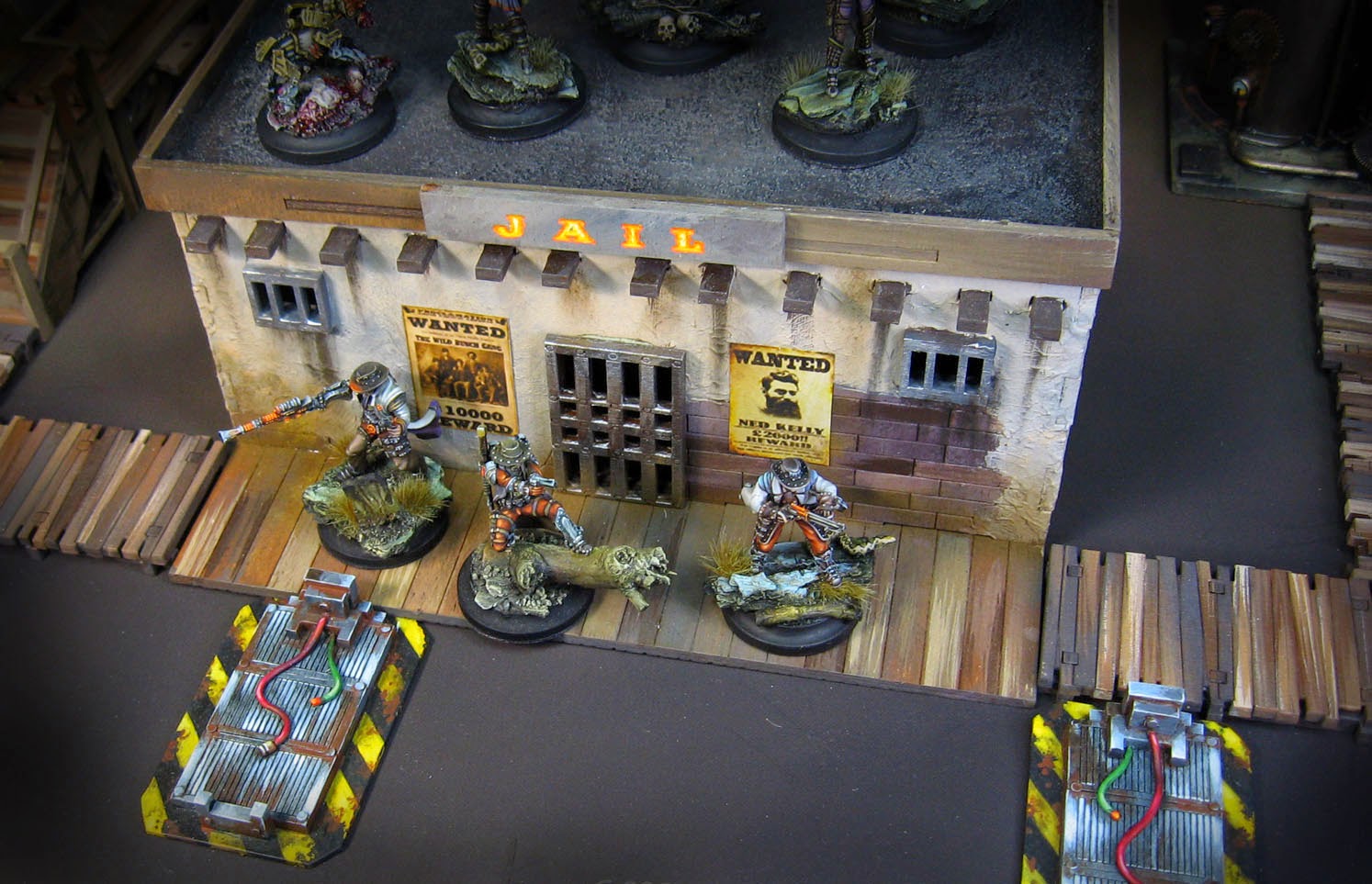 The Law Army of Wappelville grows by leaps and bounds.  Truly indicating that Statehood cannot be far behind! 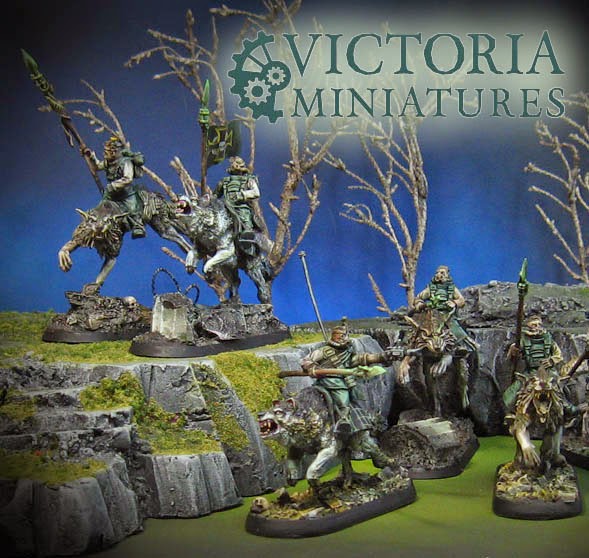 Now here's something I have not had a chance to see since it was in the tournament last year!

This was my unit of Rough Riders.

It was a heavily converted unit, utilizing GW and Gamezone wolves, Secret Weapon bases and basing products, and of course Victoria Miniatures! 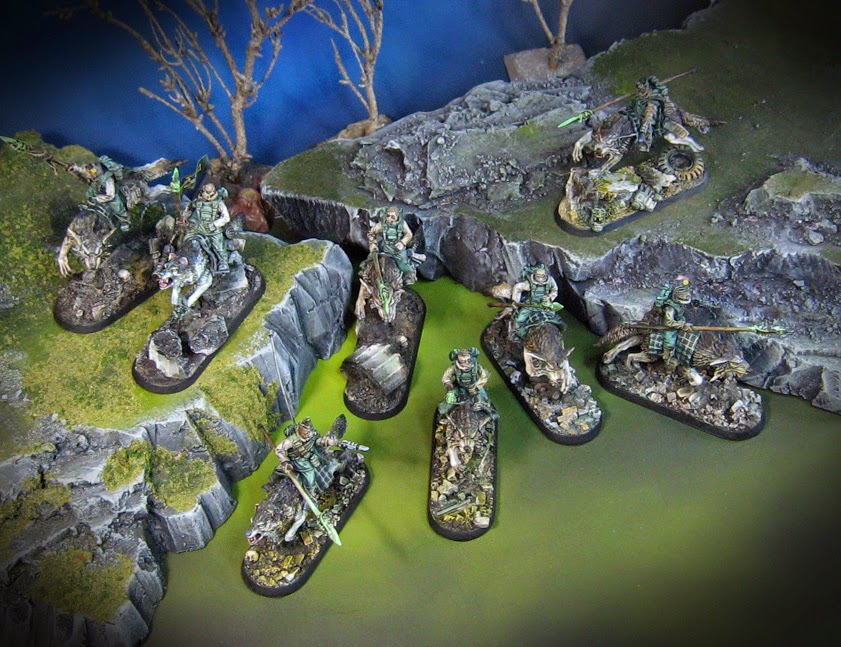 I used a variety of Victoria Miniatures kit pieces, mostly the Highland Moss Guard.  Victoria also has power lances designed for Rough Riders, so I had to make use of those! 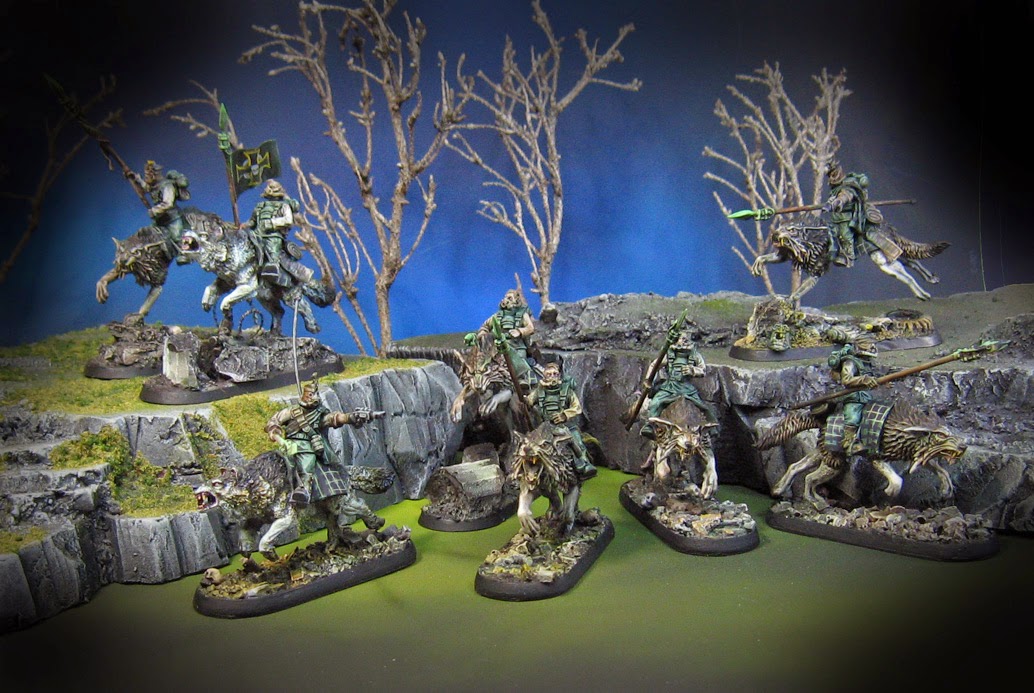 It was a very fun unit, which was led be Mogul Khamir.  It actually wiped out a squad of Space Marines on the charge in the second game. 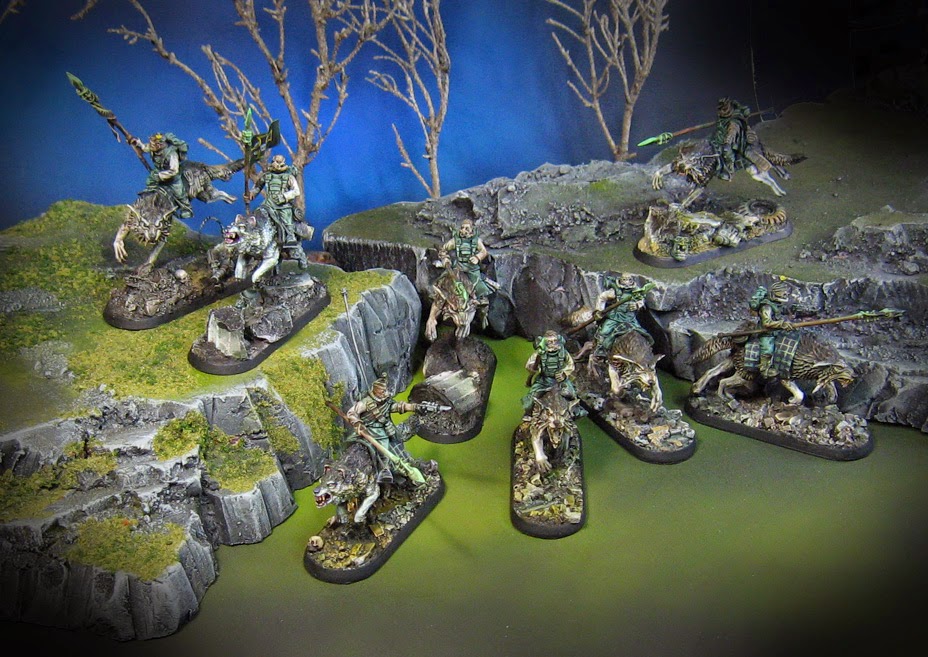 To make the sitting poses fit on the wolves, I made a saddle blanket, which did the trick.  It served dual purpose, as it allowed me to continue my tartan patterns onto these figures as well! 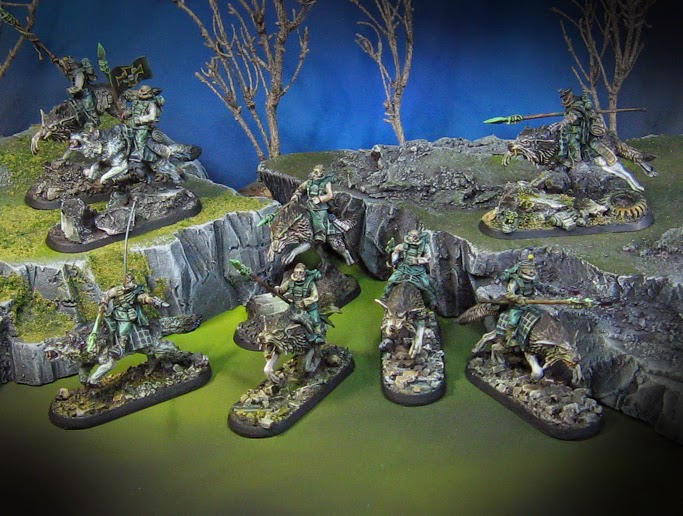 This was a very fun unit to create and paint.  Mr. Justin's fine urban rubble bases were perfect.  I added some tires to them, barbed wire, extra skulls, and more. 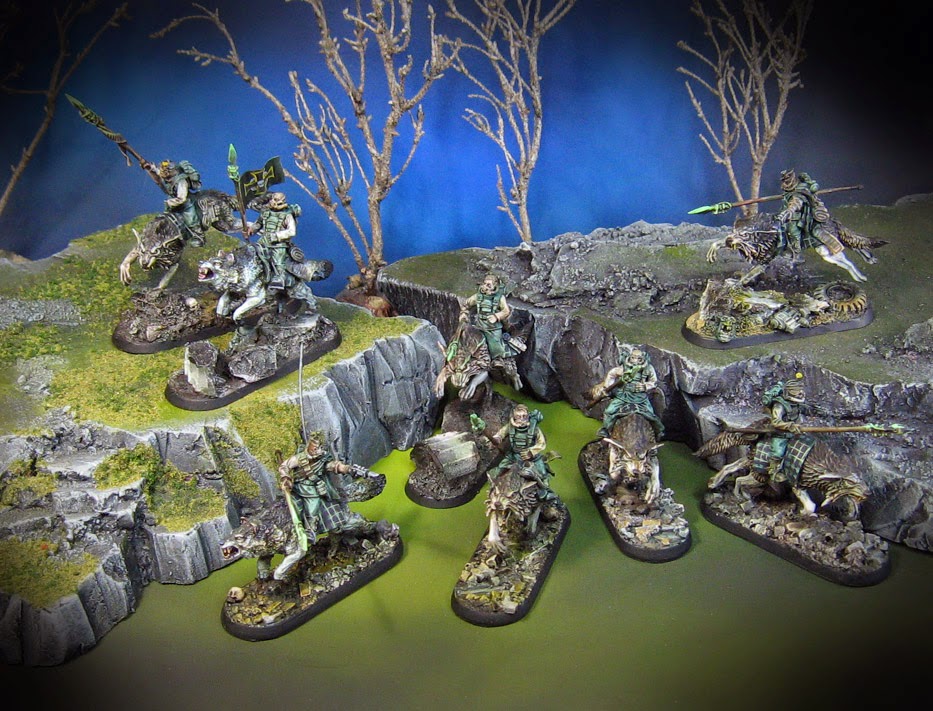 So, pay a visit to Victoria and Mr. Justin in the Dealer's room at Adepticon, or check out the figures here: 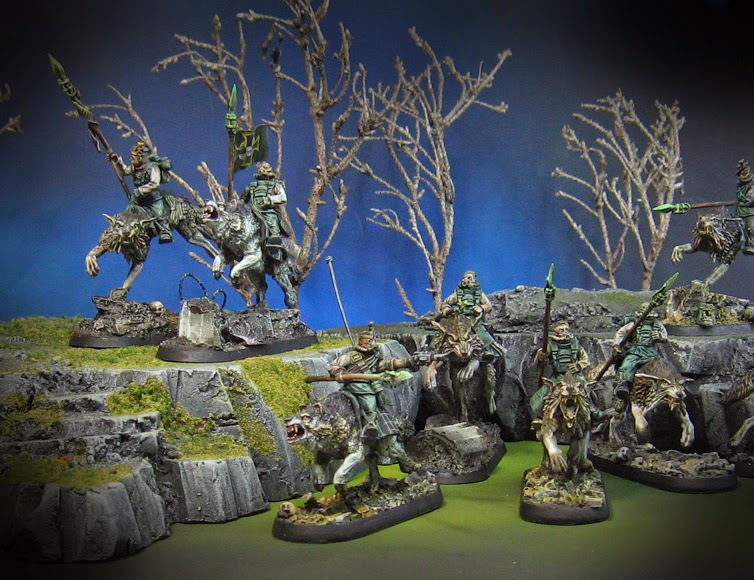 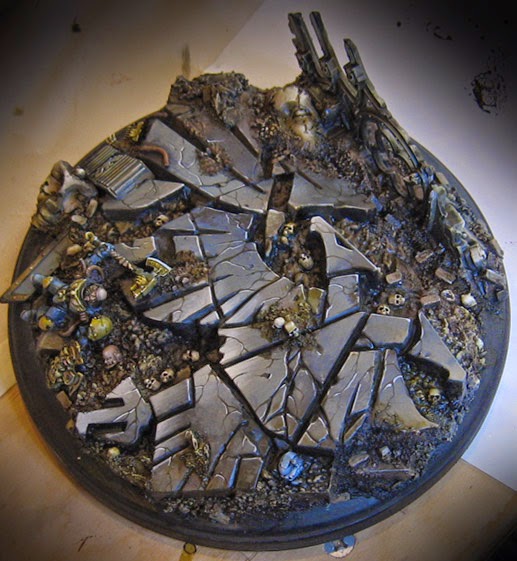 There were a few other touches that I added before I did the glazing on the big base.  These were in the form of highlights and even some painting of cracks in the stones. 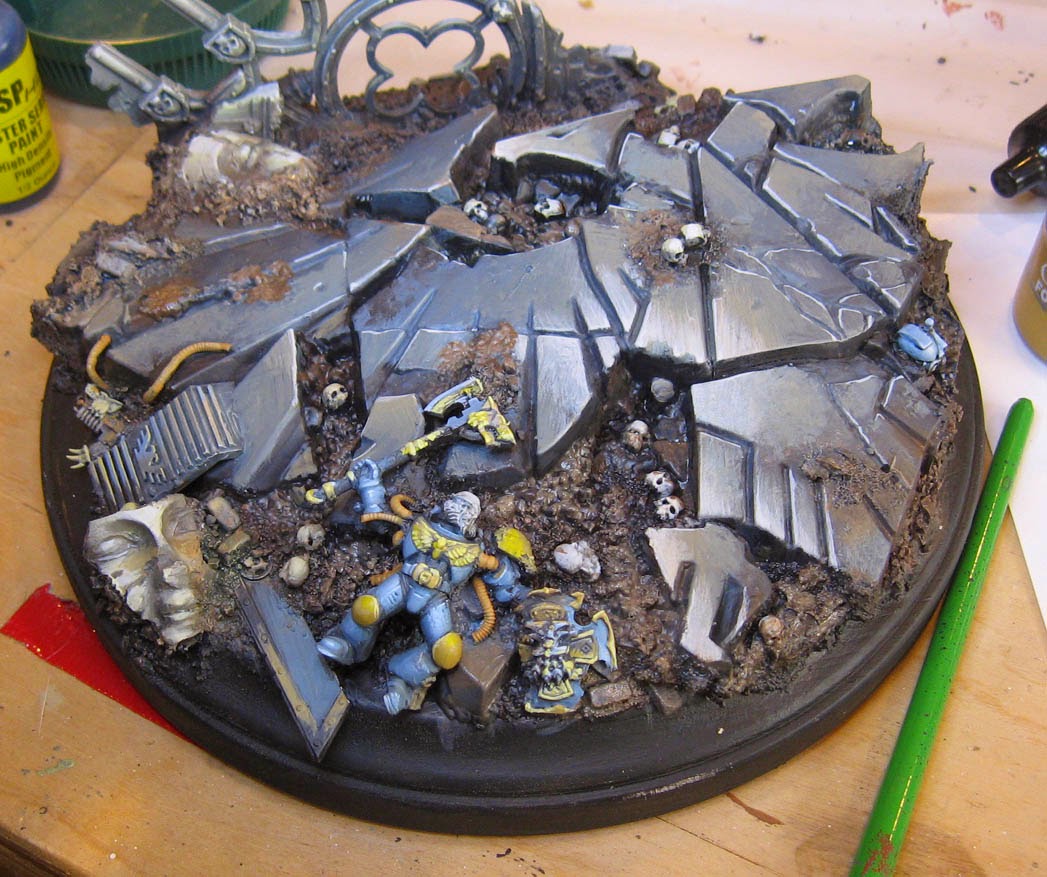 There were also a few more skulls that needed a touch of color.  These were the one that were sculpted into the original plastic pieces.  I was far more aware of all the Secret Weapon skulls that I added :-) 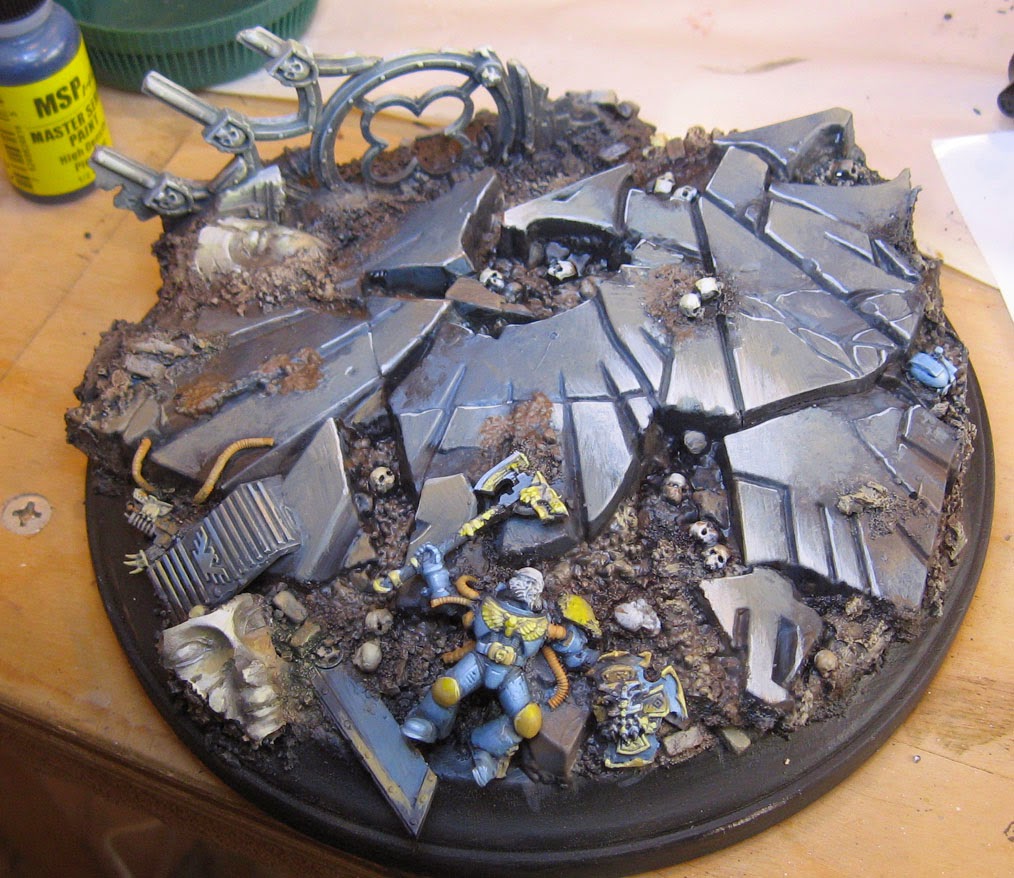 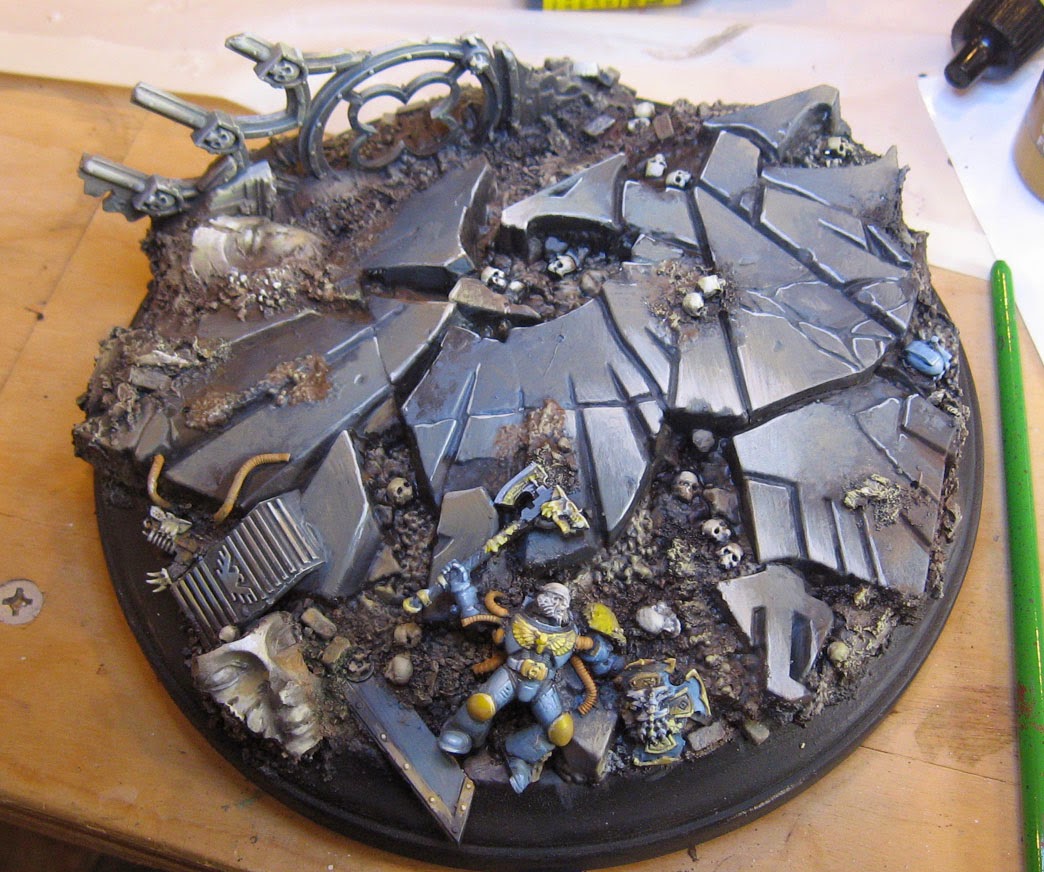 The usual suspects, Secret Weapon washes.  My Vallejo washes were still back at the studio, so a few of Joe's GW washes joined in on the fun! 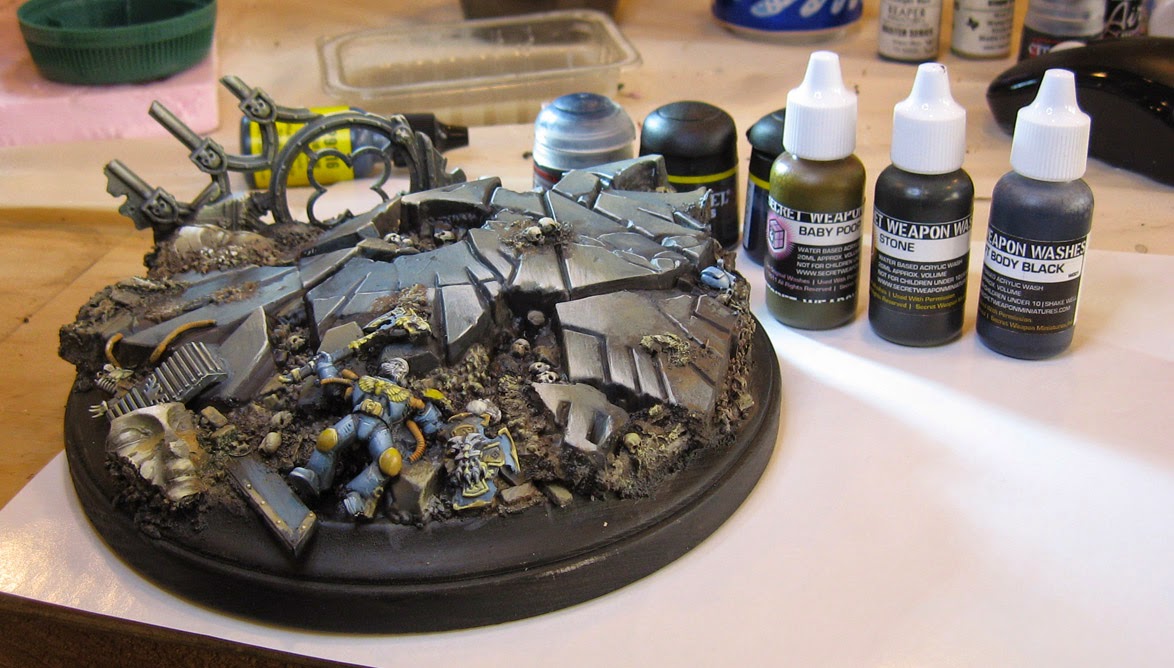 As always, an array of colors out on the palette so that I can create new mixes and work just as quickly as I did with the Shaded Basecoat applications. 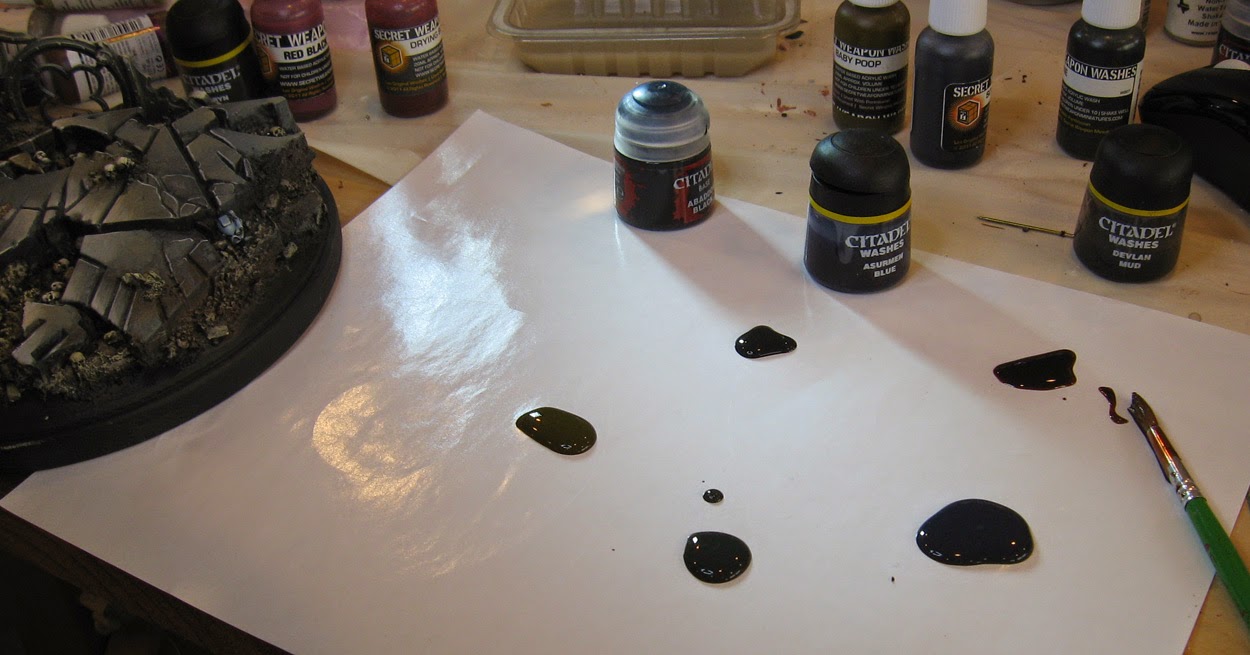 The casualty also got it's own series of glazes... 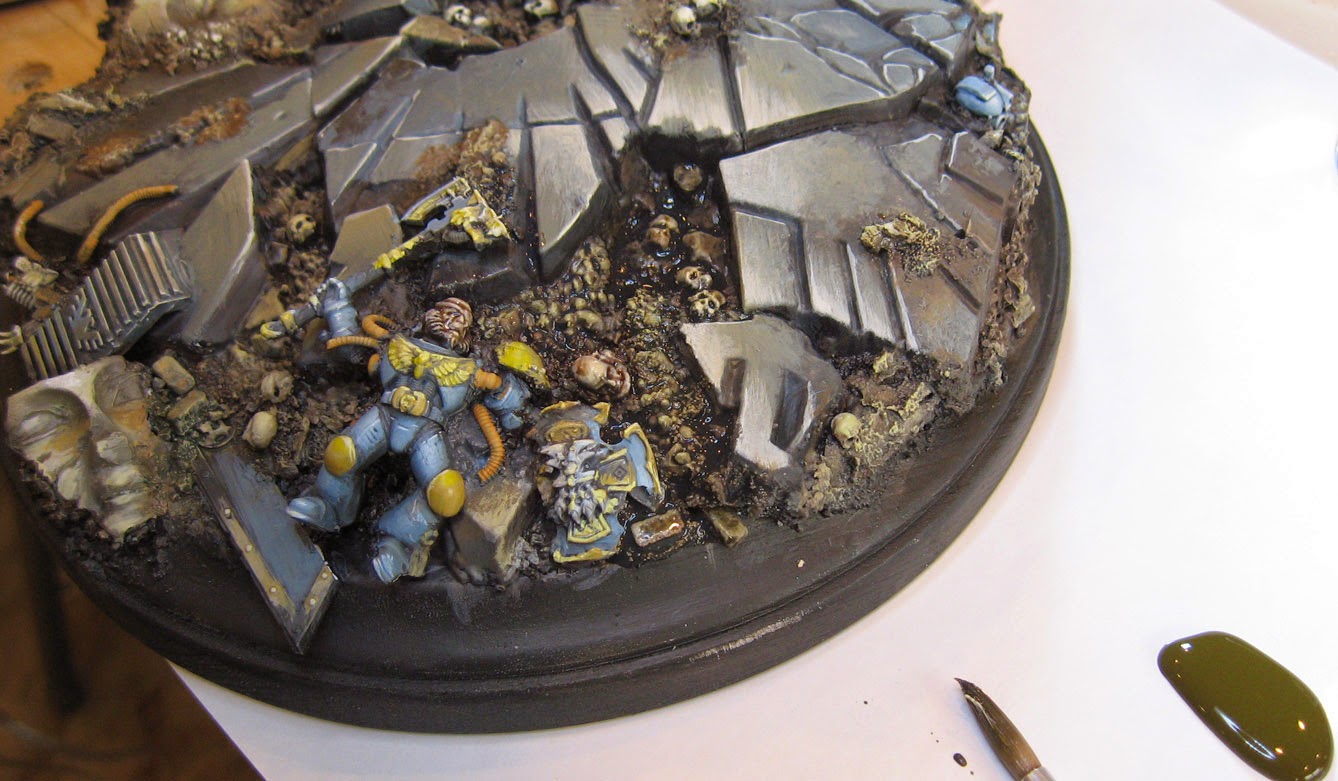 In areas where I went with a warmer dark, I enhanced that with a more reddish glaze color. 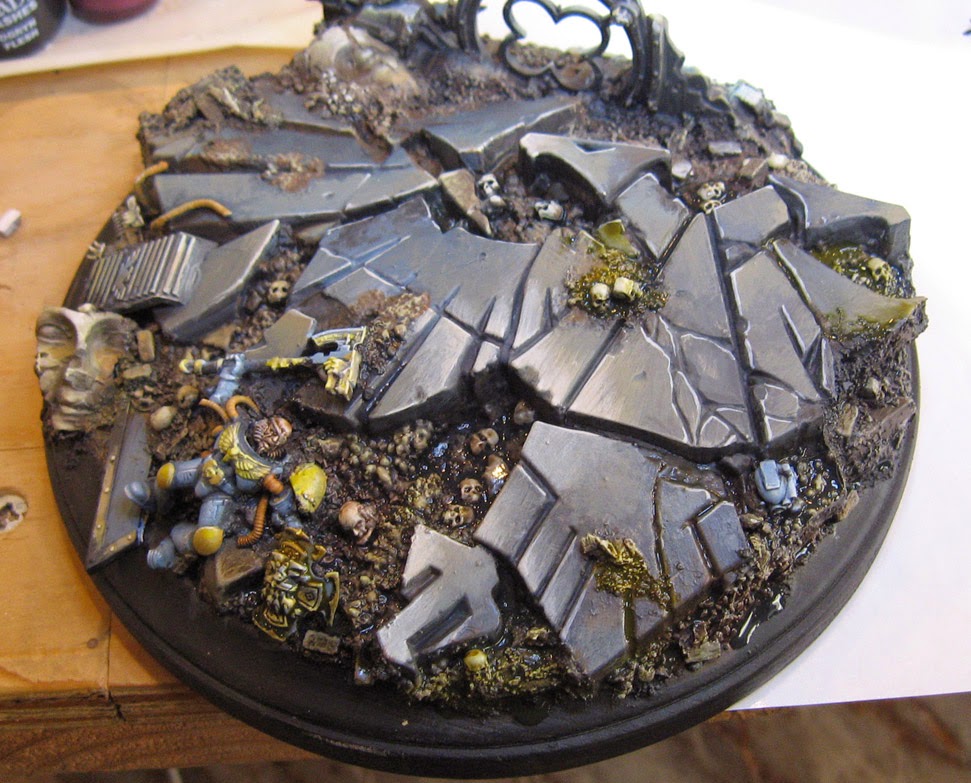 I did the same with the cooler areas, usually mixing blue and brown together, as opposed to just using black.  This not only makes more interesting dark shades, but it can extend the life of your washes, and you don't need to buy endless jars of black :-) 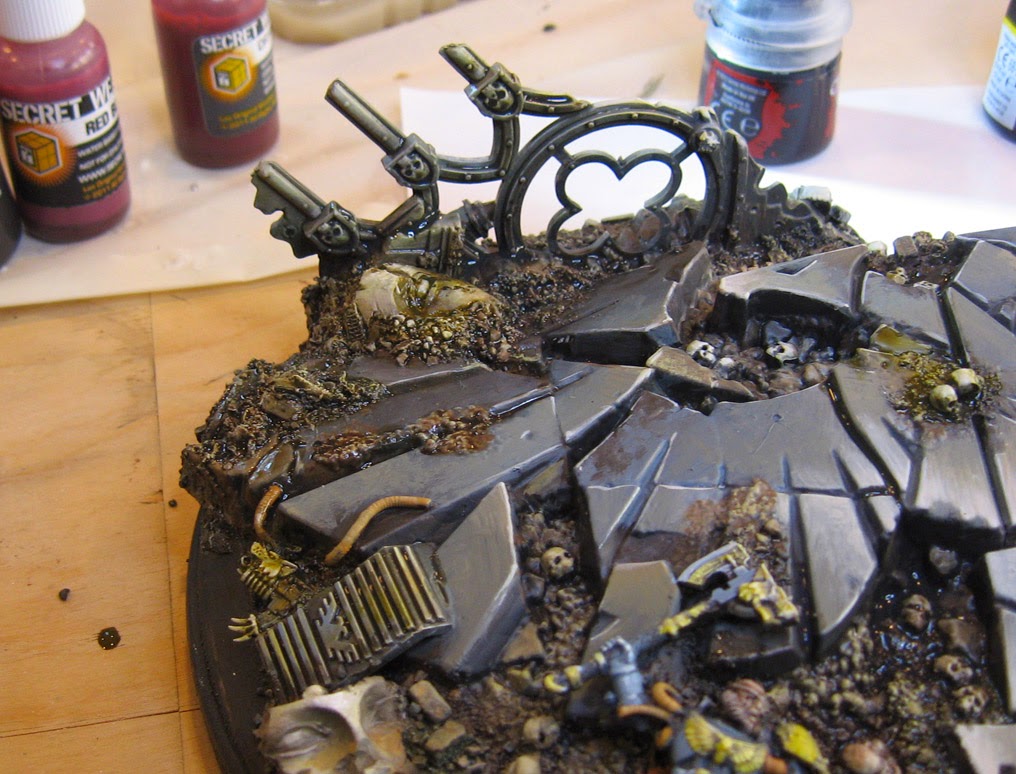 This was the trickiest piece to do the glazes.  What was applied to one side of the piece wanted to leech into the other side.

So, I had to apply these more carefully... a little bit drier.  I also kept a soft tissue on hand to either wipe away any excess or to do a little mixing on the surface. 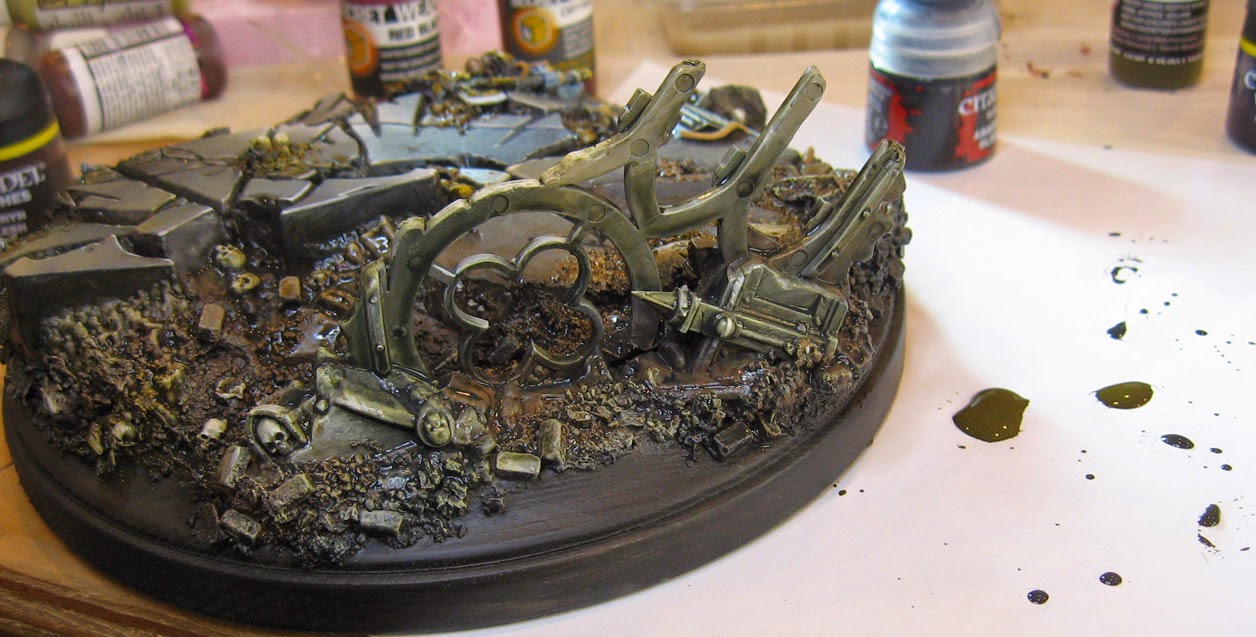 I tried to make sure that all the glazes on the casualty were a bit more muted, and even had some of the glaze colors from nearby areas.  This would keep that color continuity going. 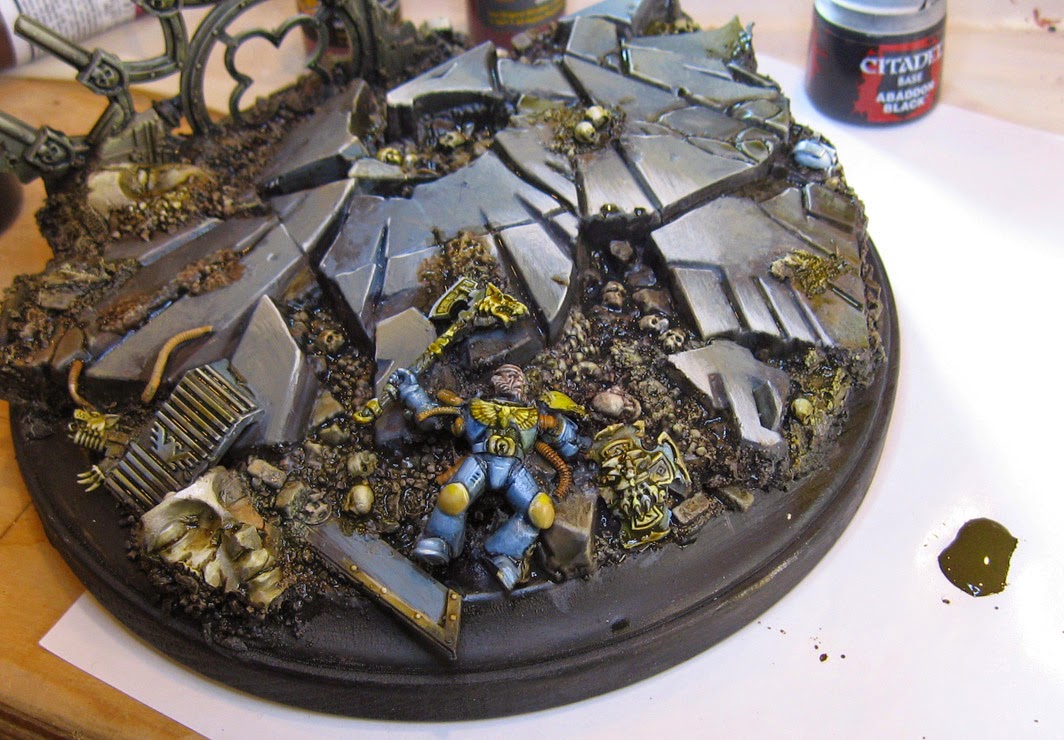 At this stage, I can get into more refinement and detail.  I began to finalize the cracks in the main stone sections... 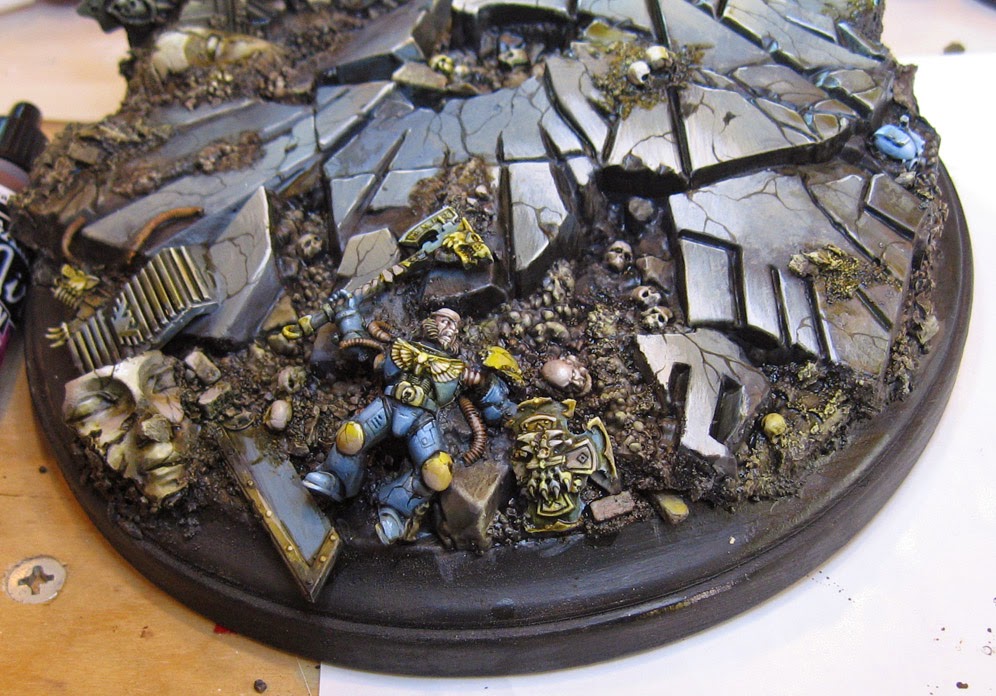 This is about the only detail I will add on the stone sections, as I want to add rust and blood.  Once those final few effects have been added, I will look over the whole base once again to see what might need more emphasis and what might need to be toned down. 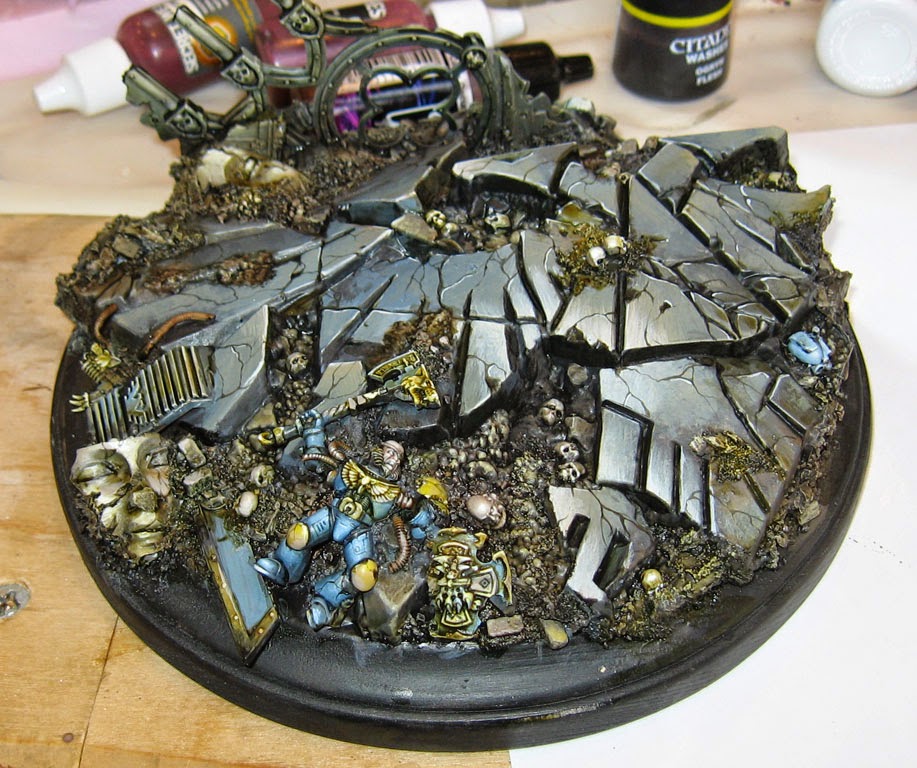 Now for a set of photos to give you an idea of how these base looks before those special effects. 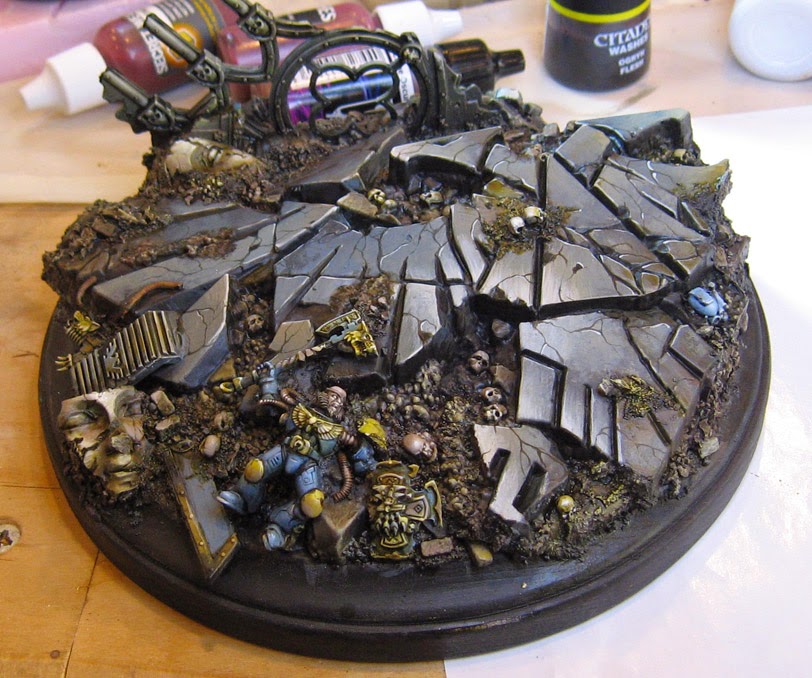 It's been very fun to work on Joe's big base.  Just like any project, I learn a little something new each time! 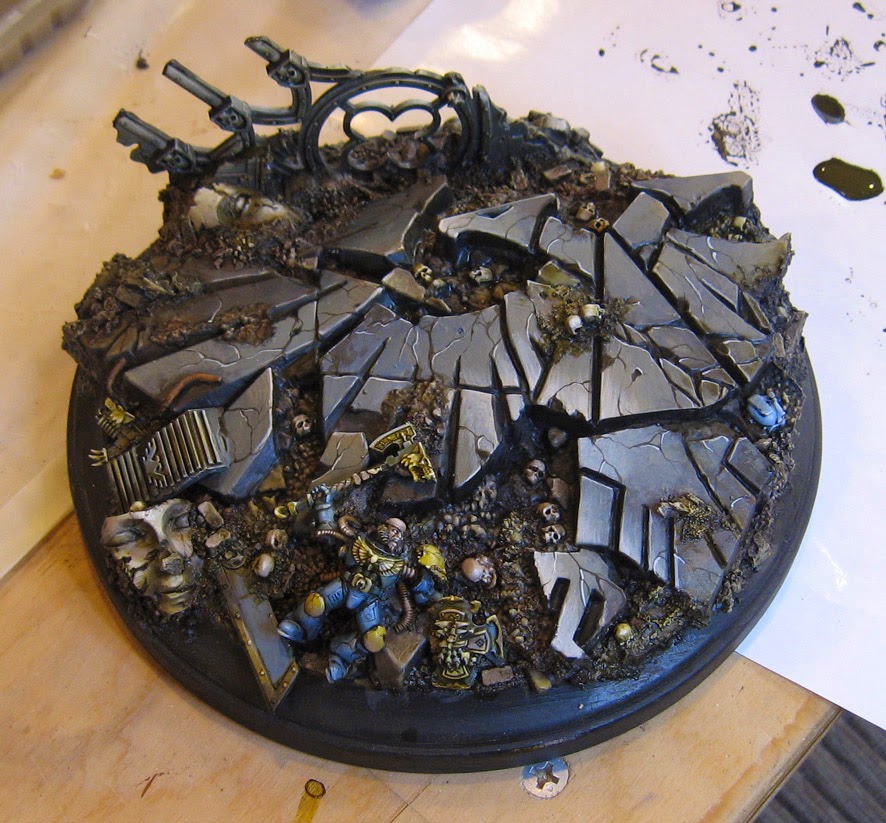 I will do one final article on the base to show you how I approached the rust, blood, and possibly even some dust.

One reason the base was done in the limited palette style was to allow the huge demon figure to 'shine', as it will feature some very highly saturated red colors. 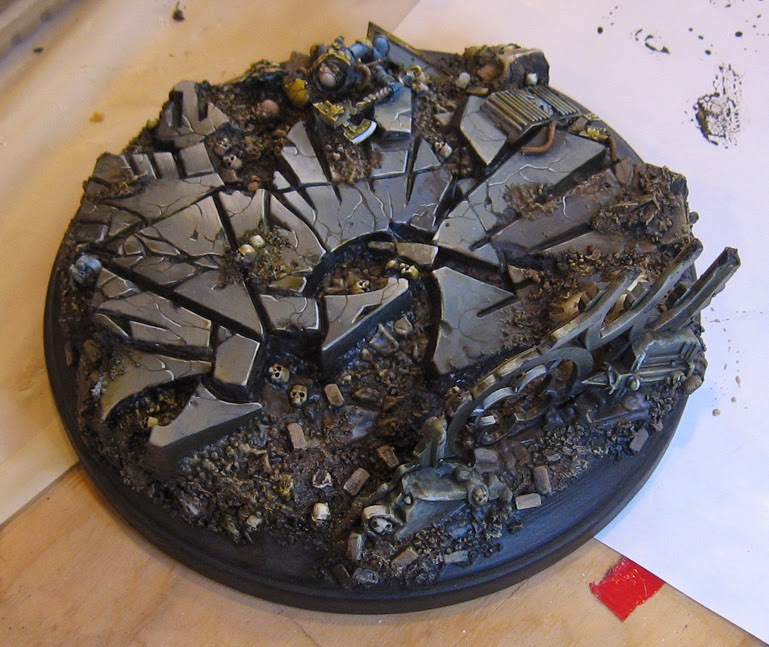 Posted by wappellious at 2:40 AM 4 comments: