War Begins! The Attack on the Meuse 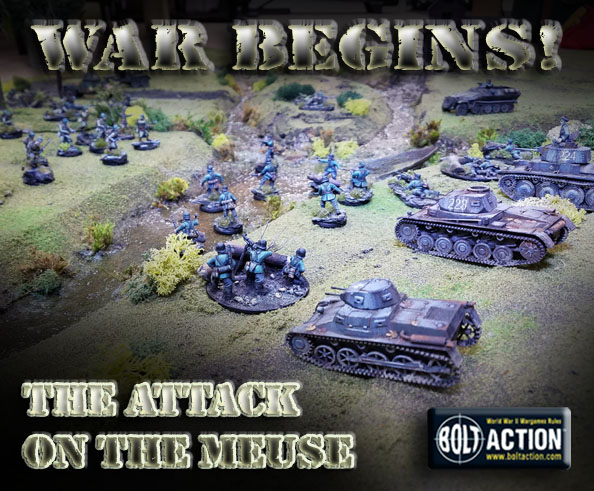 Here we go!  Miniatures on the new terrain board at last.  The first thing that strikes me is how much bigger the board suddenly became!  After staring at the same shapes for so long, it felt like the board was tiny, and shrinking all the time.

When the figures were placed on the board, it seemed to grow exponentially. 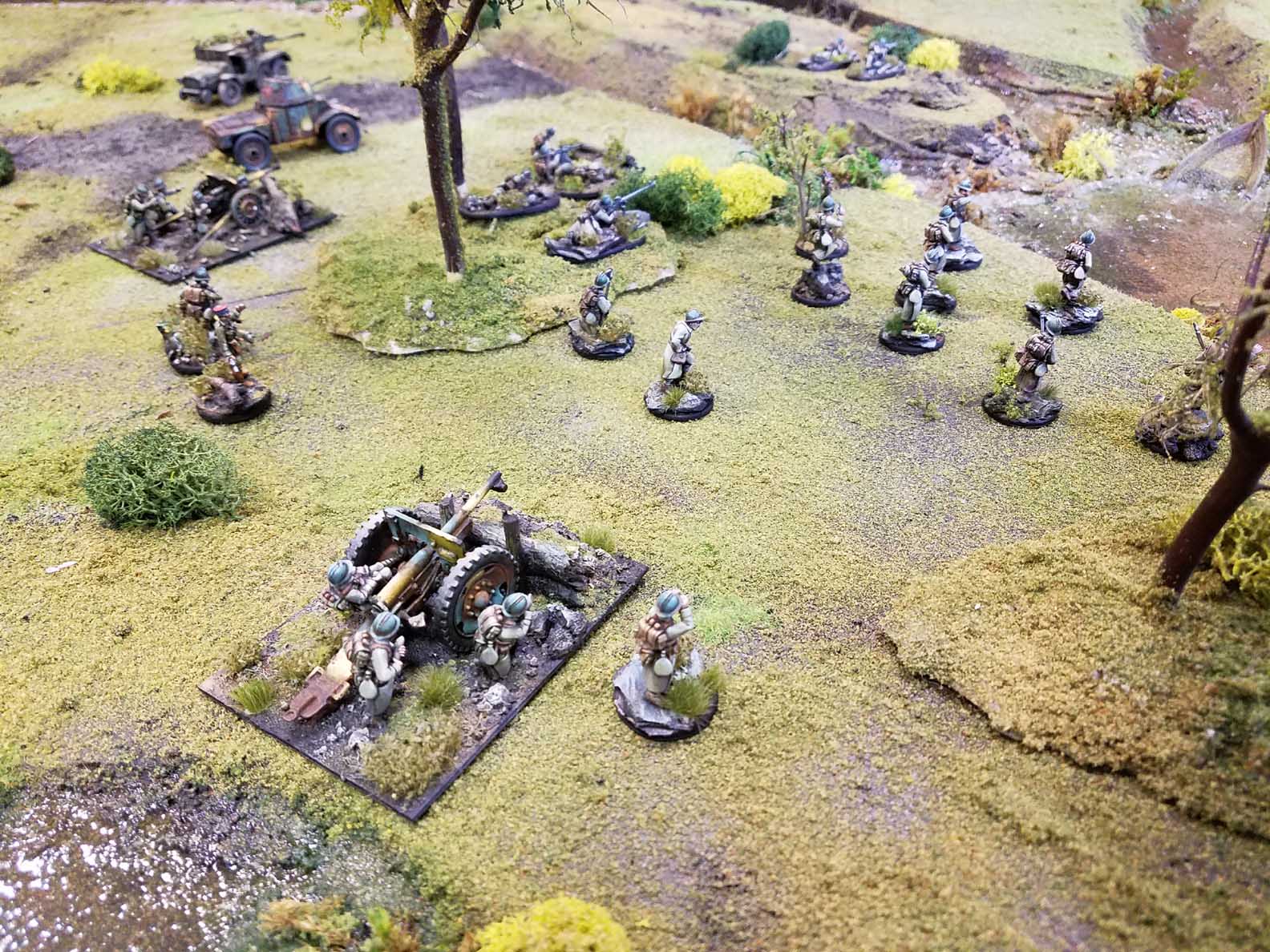 The French troops make a desperate advance to the river to meet an oncoming attack, will they be in time to thwart it?  With no time to make prepared defenses, they may be overrun! 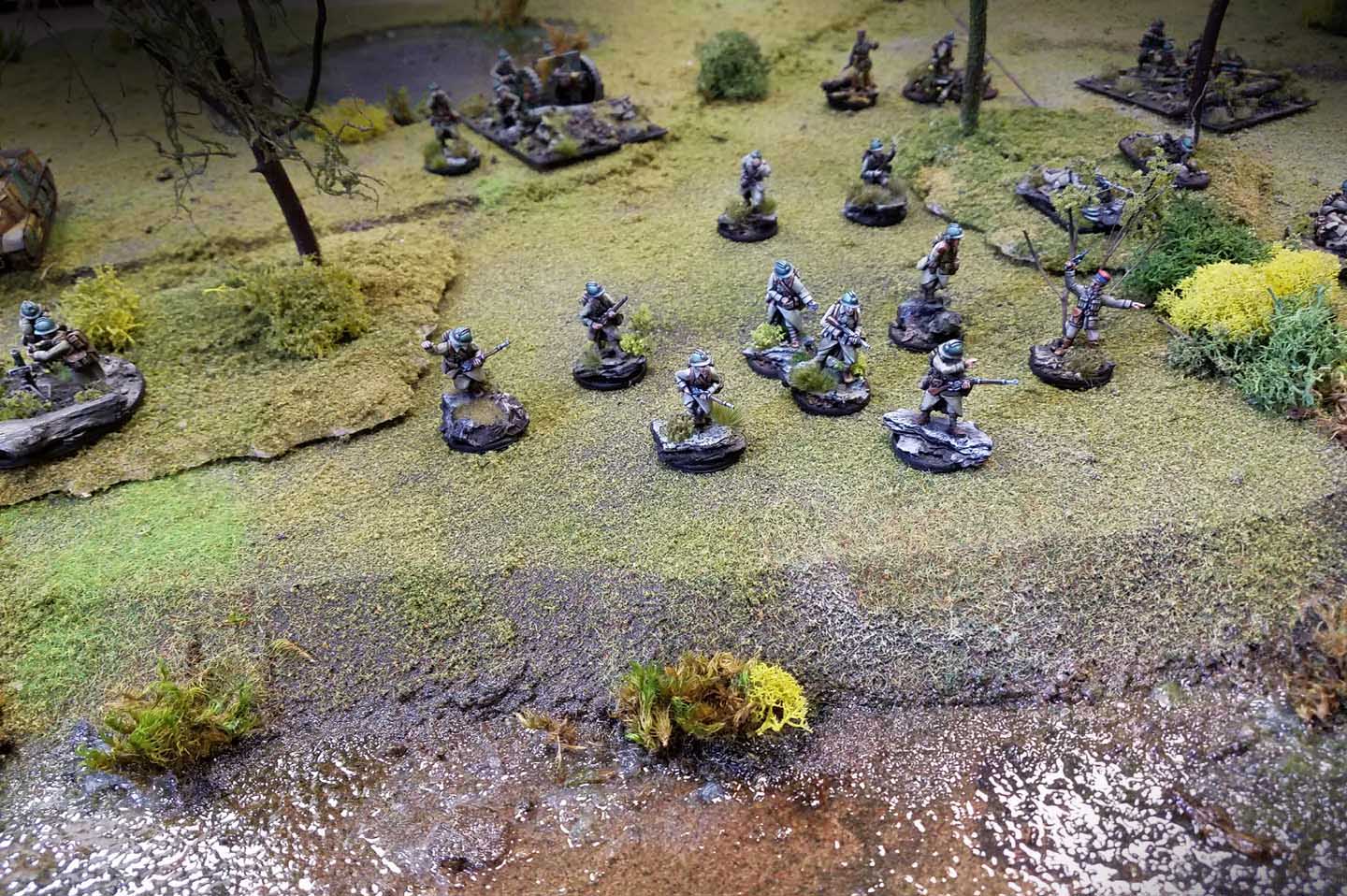 A sniper team attempts to neutralize the German artillery threat at the watermill, hiding in the reeds... 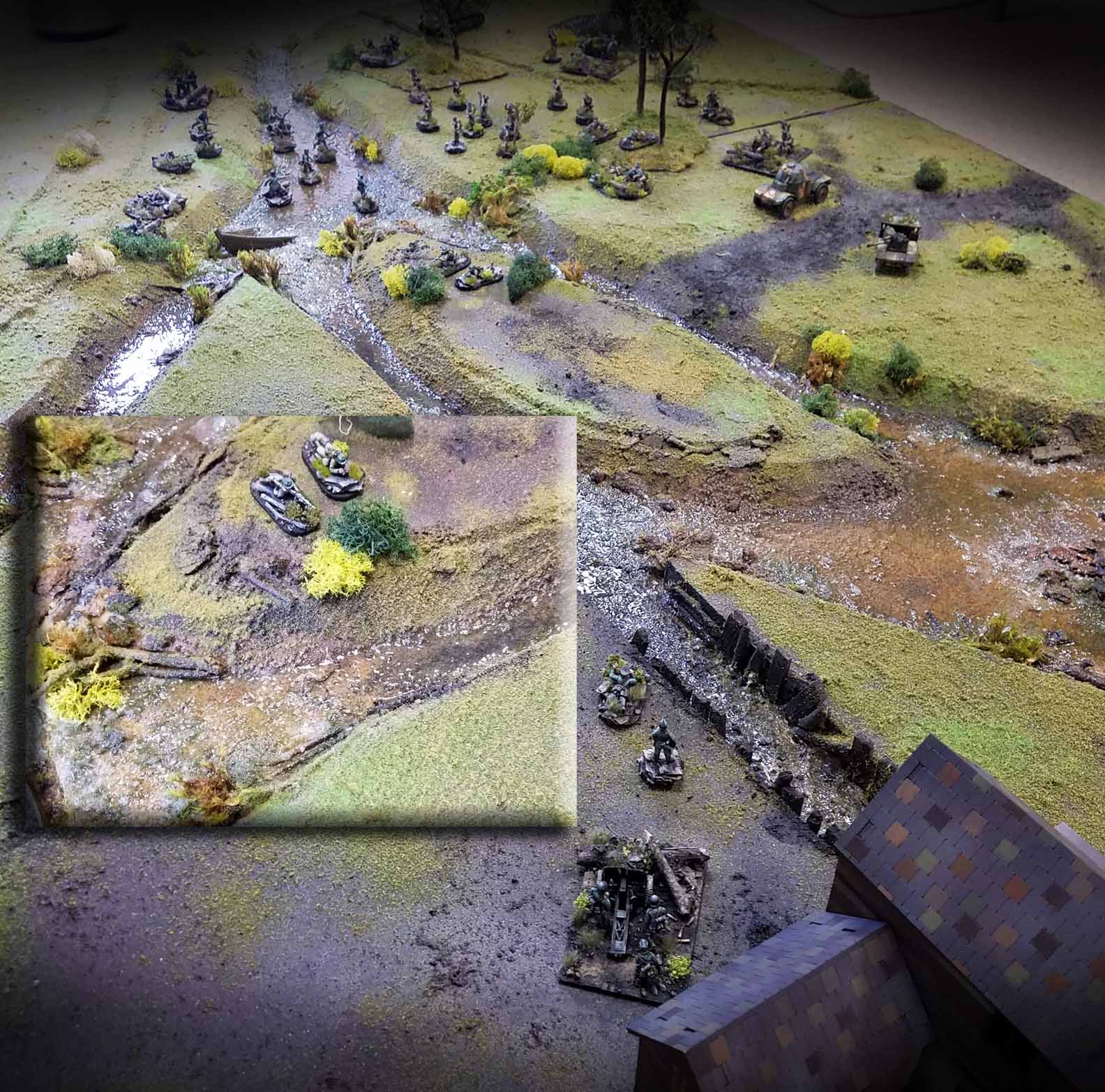 An artillery duel begins with the French 75mm vs the German light howitzer team.

The first German troops attempt a crossing at the river, but are met head on with machine gun and rifle fire. 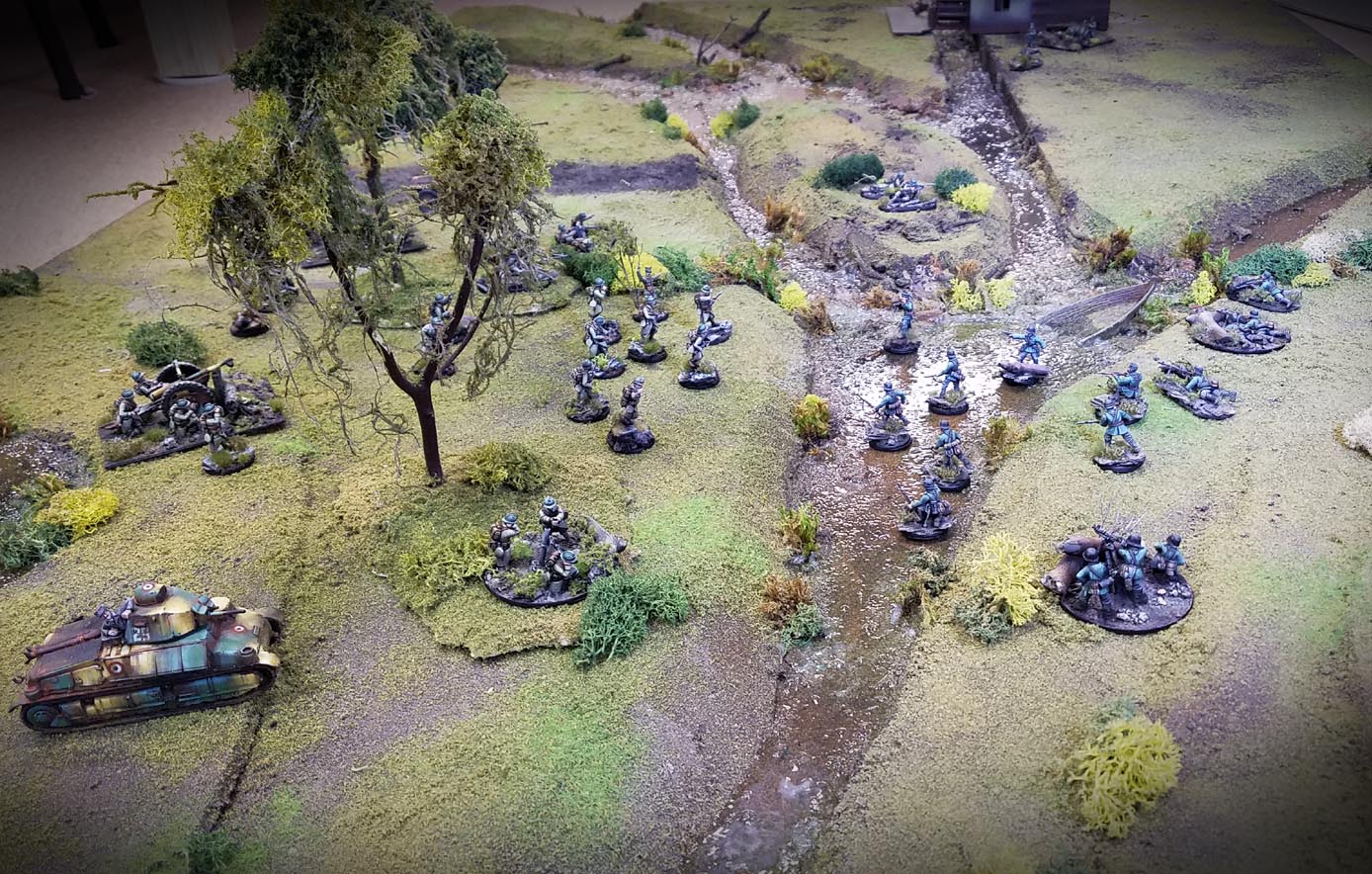 The rumble of tanks can be heard as German armor advances to the river.  Will the slower French tanks and Anti Tank guns be able to prevent the Panzers from establishing a beachhead?

The machine gun team and the howitzer take aim at the troops splashing through the river.

A wave of light armor and troop transports arrive to overwhelm the French positions... 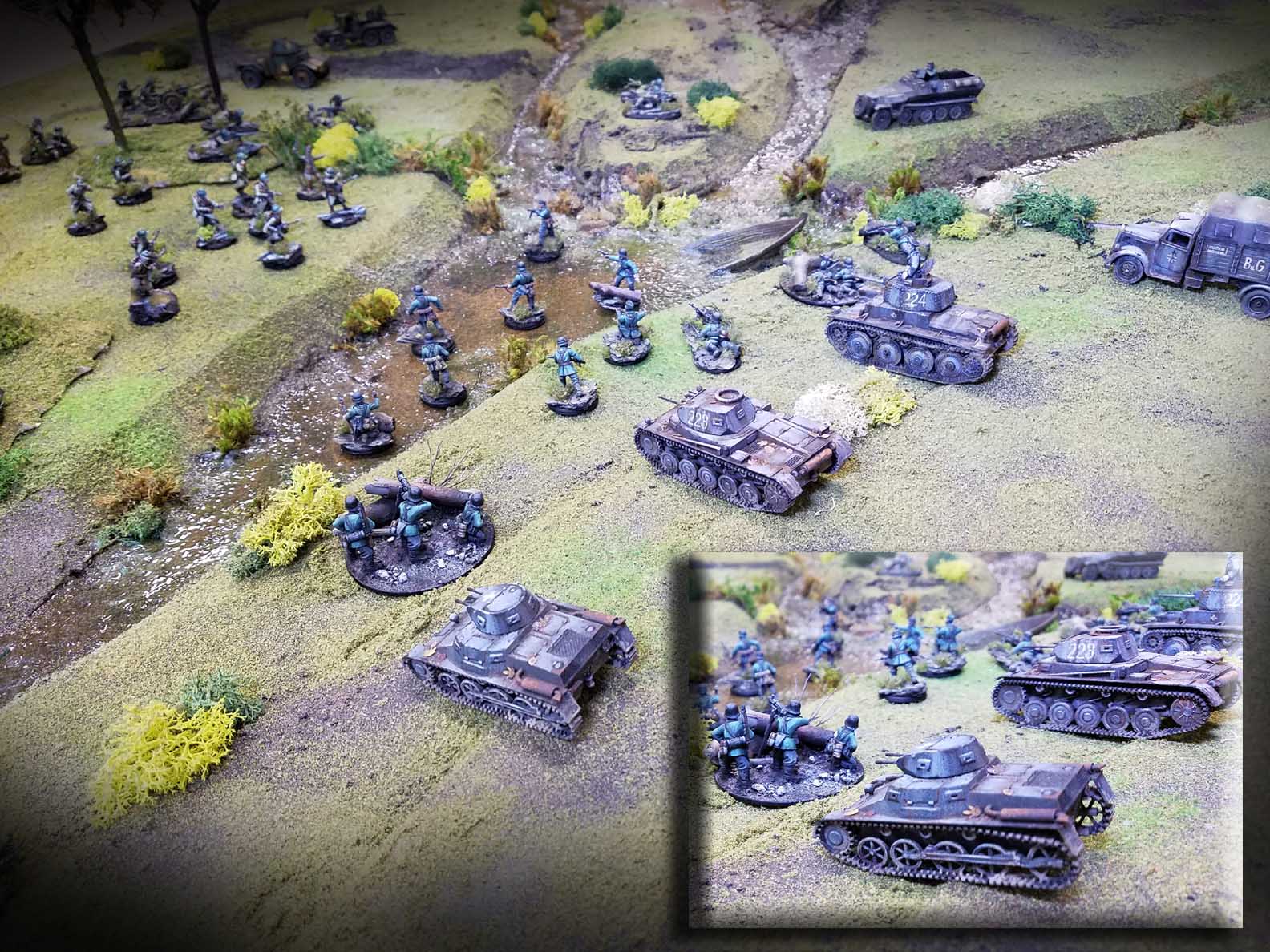 More troops emerge from the Hanomag and Opel Blitz, supporting the initial attack on the river, advancing over the dead bodies of their fallen comrades... 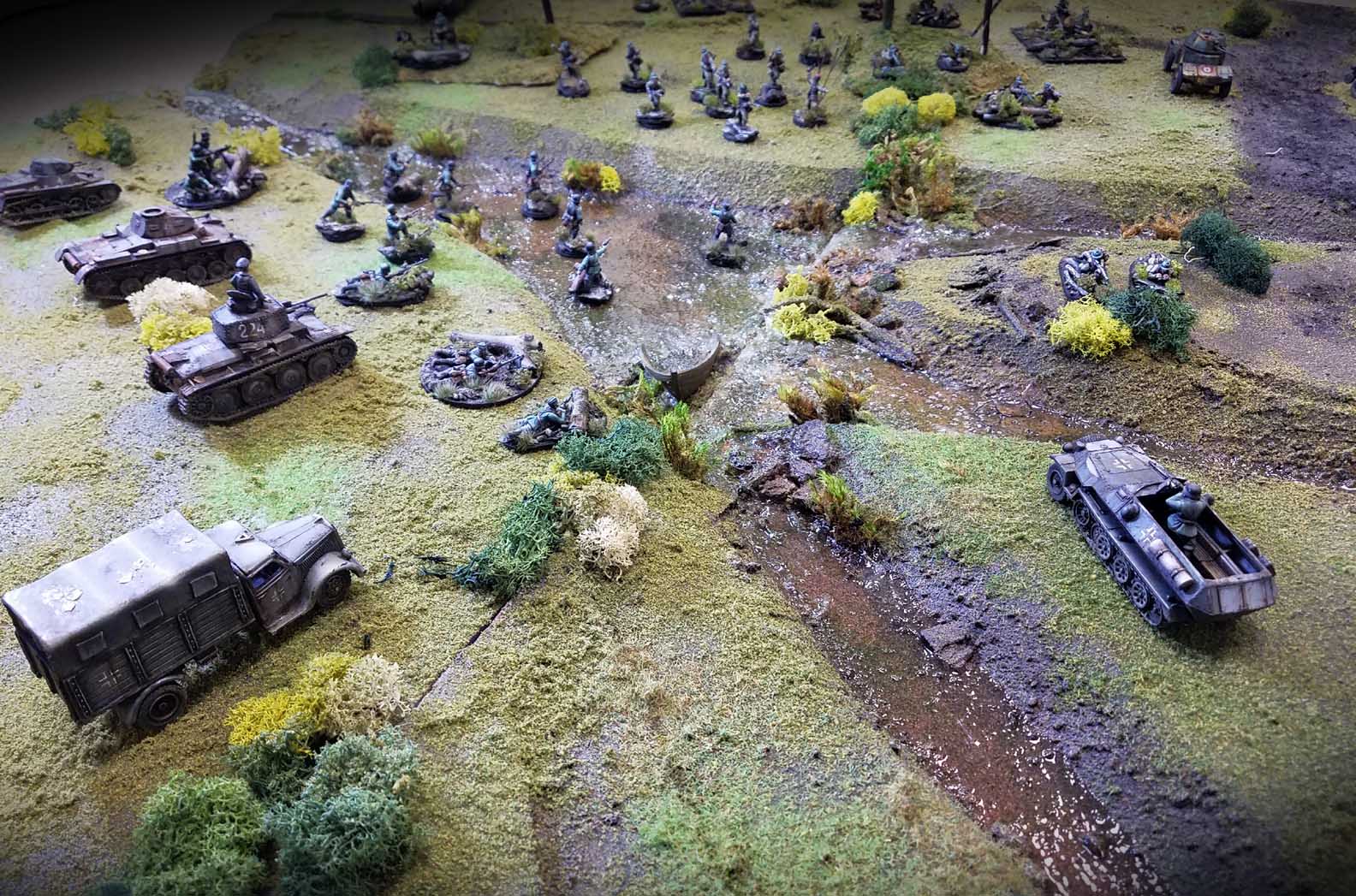 Major Poirot orders an all out counterattack!!! 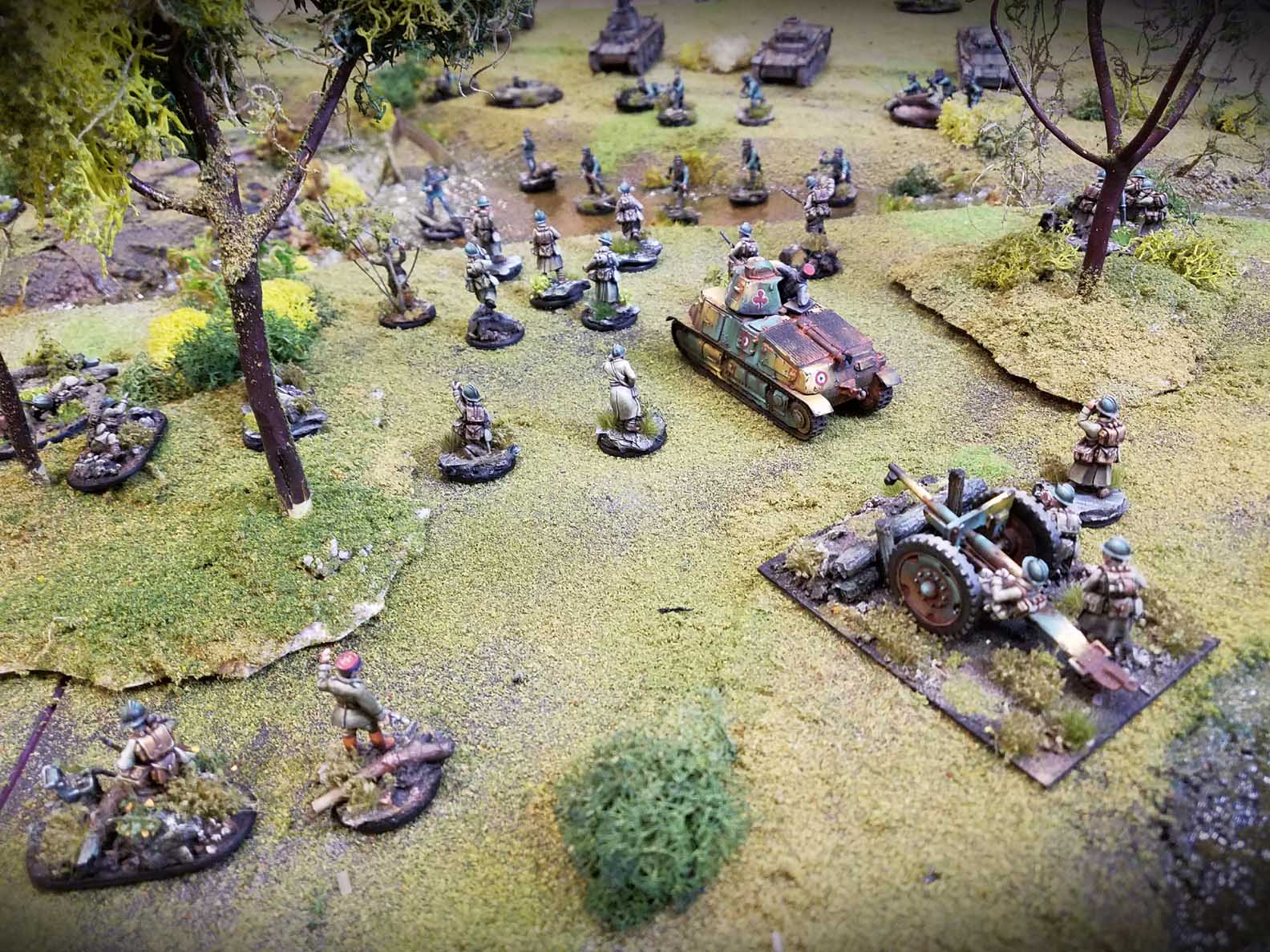 The hard pressed defenders rush into the waters which are now turning red with the blood of many casualties... 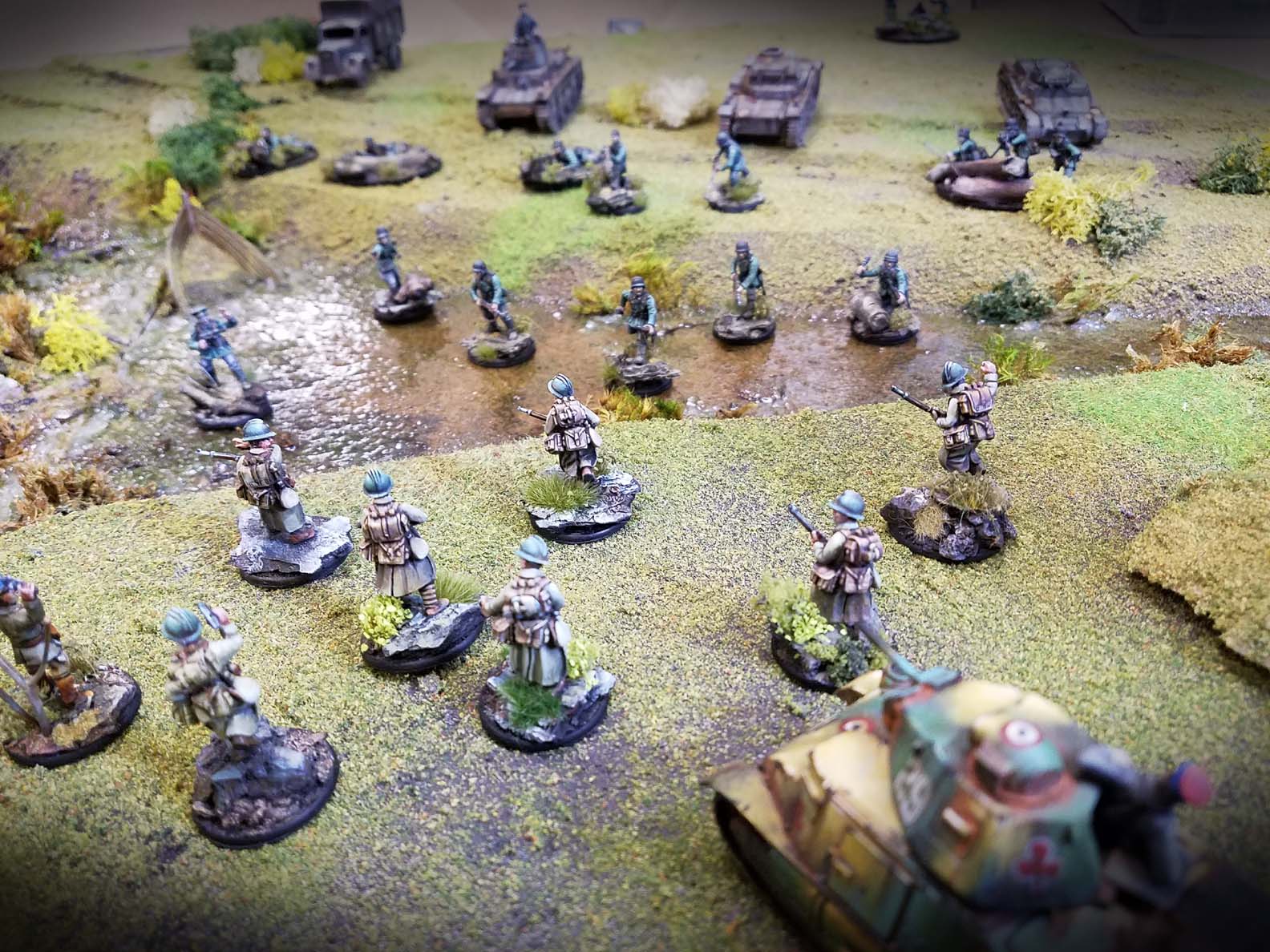 The Somua and Panhard take aim at the thinly armored Panzers.  More than one will burst into flame! 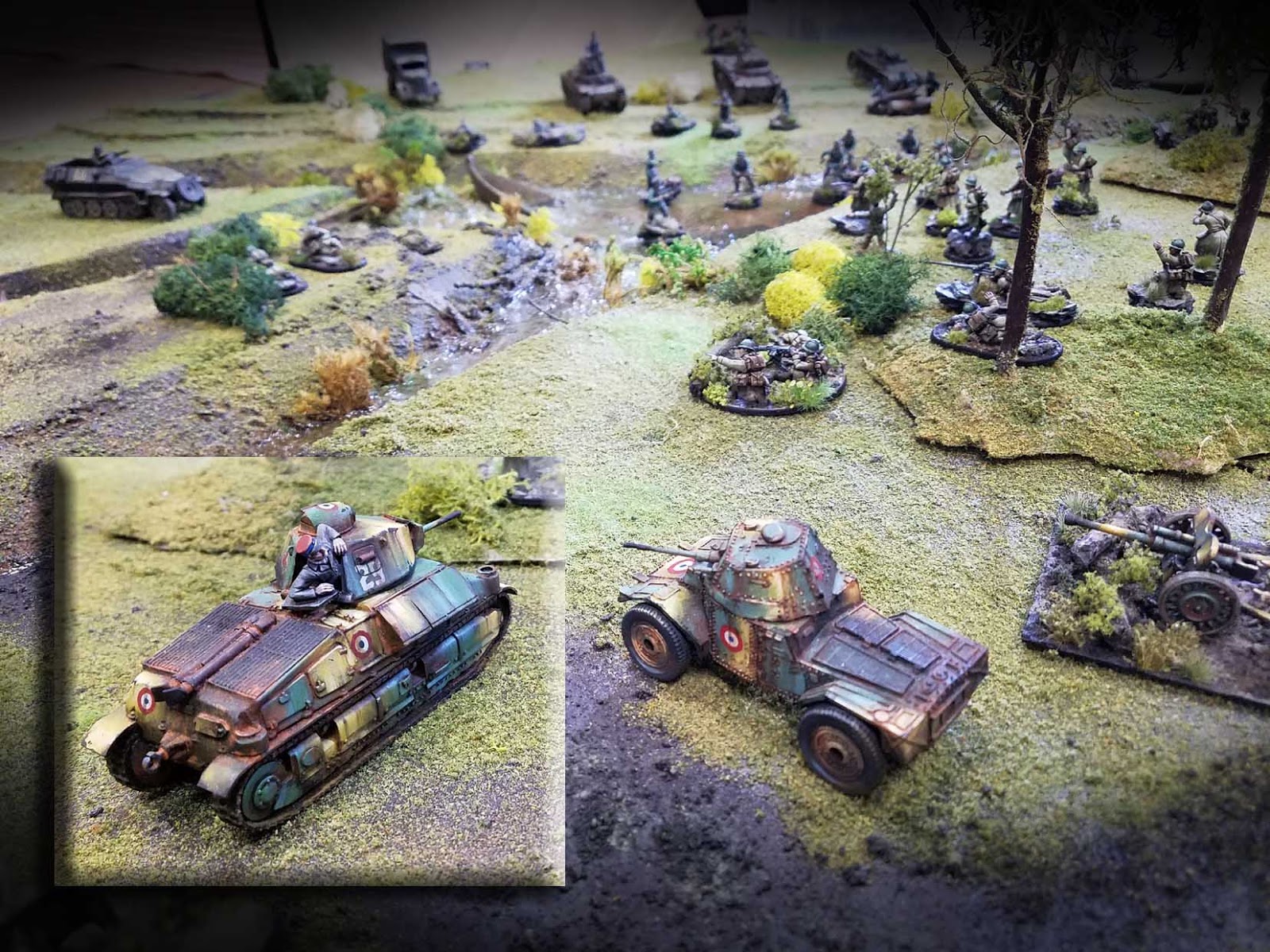 But there are more where those came from, and the massed formations of armor present too many targets for the French gunners. 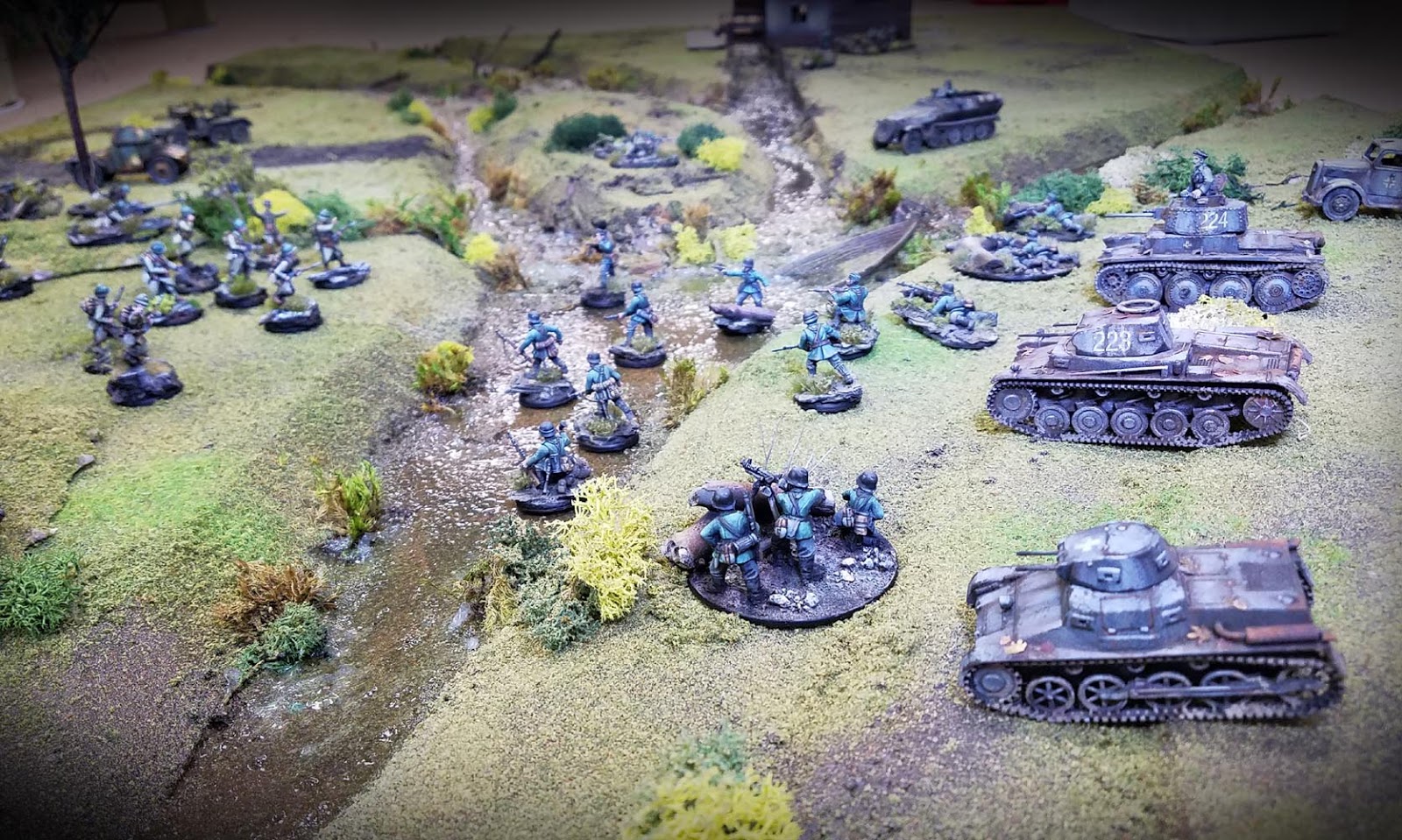 If they are allowed to cross the river, the sickle stroke to the Channel coast will soon follow.  This position must be defended to the last man. 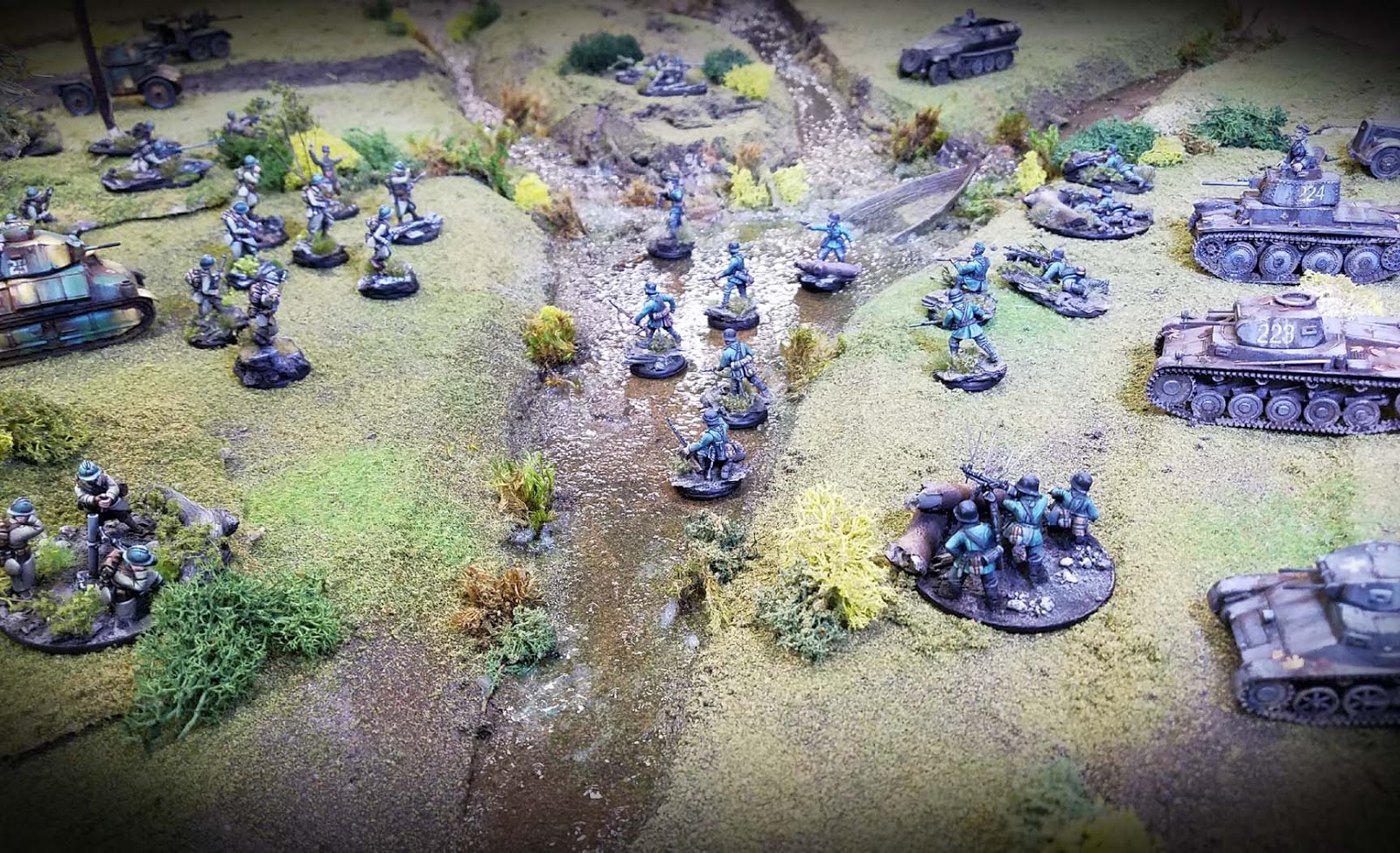 There are no more reserves to commit to the defense.  Fight to the last round!

Stay tuned for some early war battle reports, featuring the Armies of France, the BEF, and the Heer! 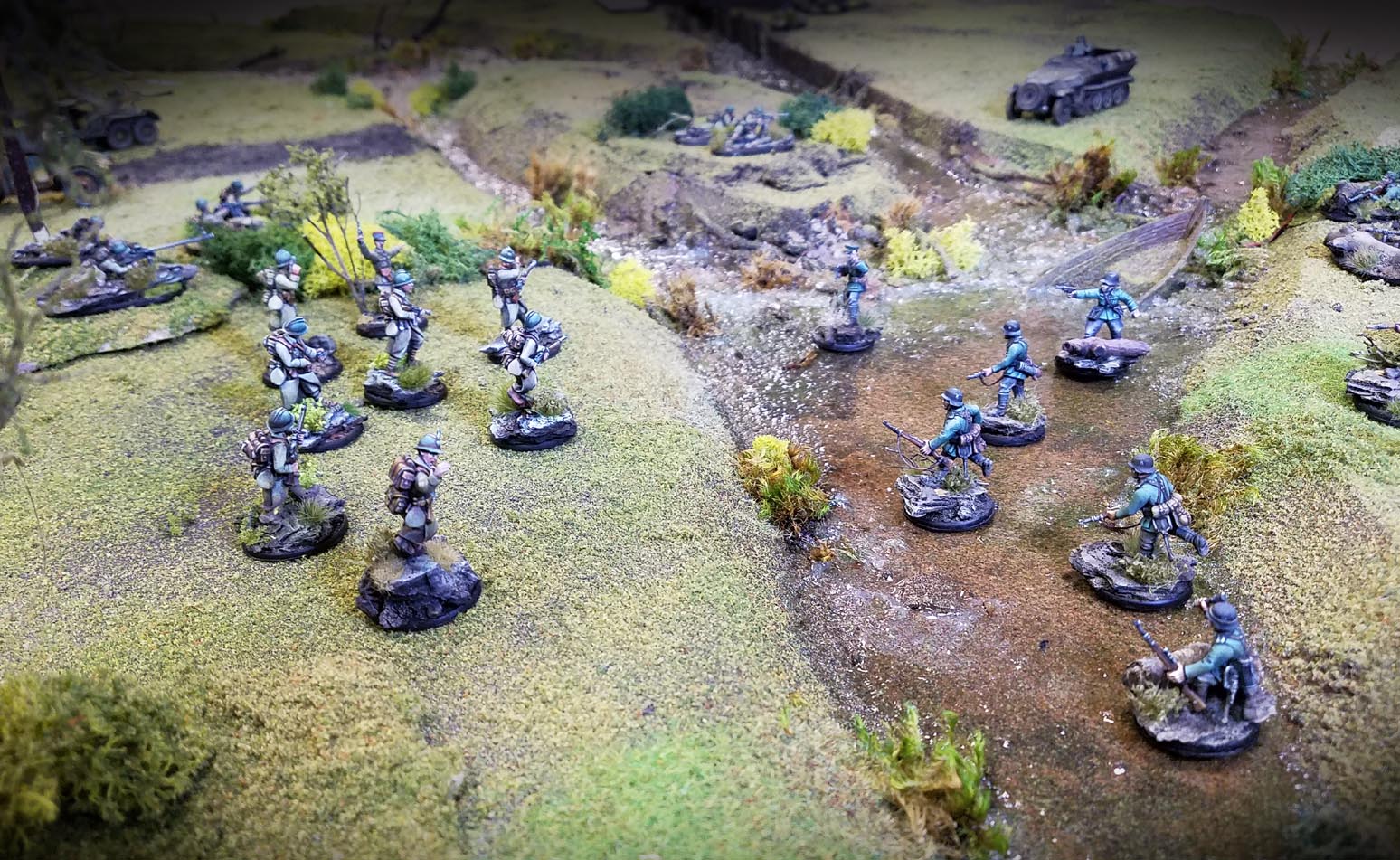