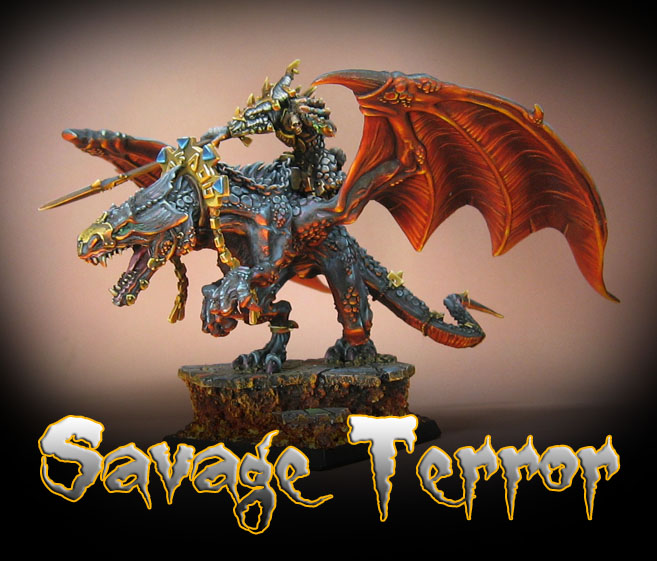 This is one of my favorite Lizardman figures that I made for the army, and one of the larger conversions!

I added the old style dragon wings to the ancient metal Carnosaur, as well as armor and even some chains.  I could not resist doing some firey object source lighting on those wings.  In fact, at this time, you could give the Saurus units 'marks', which would give them different traits.

One would be marked as 'Fearless', which would be represented by a unit that was painted in this set of colors... a dark grayish blue, with lava OSL.

It was a challenge to mesh the wings with that body, and a lot of green stuff was required.  I was able to use the continuation of the scale texture to achieve that blend.

The head crest was made from plasticard and brown stuff.  The character is painted grayish white, as was traditional for an Oldblood.

Now for some views of the lighting.  It was a huge challenge, because he was really heavy, and there were endless amounts of edges that would catch that light!  Ironically, that's why I chose to do that effect!

This was also the last Golden Demon winning figure... I forget which year that was, but GW stopped doing Games Days in Chicago after that.  It was a Silver Demon for Loq-Qar, which is what his head crest spells in Lizardman glyphs.

The views from above show off the texture that had to be sculpted on to the wing joints to make them look like they were part of the original sculpt!  He was the centerpiece of the first Armies on Parade figure that won the overall in the U.S. back in 2012!

Posted by wappellious at 9:51 AM 6 comments: