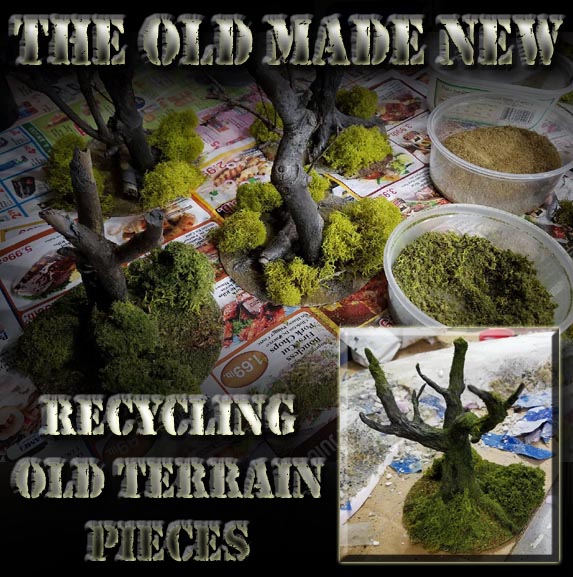 Since I didn't have the time to create an entirely new river terrain piece for the next battle report, I thought it would be a good idea to find a way to "expand" the existing river piece.

After watching a few documentaries on the Battle or the Boyne, I learned that even small rivers sometimes have very impassable terrain on either bank.  Marshy, boggy and bushy embankments that are almost more hazardous than the river itself!

So, I hunted around and found some old terrain pieces that I had made for another game system, which looked a lot like large old trees which were decaying in marshy, boggy ground. 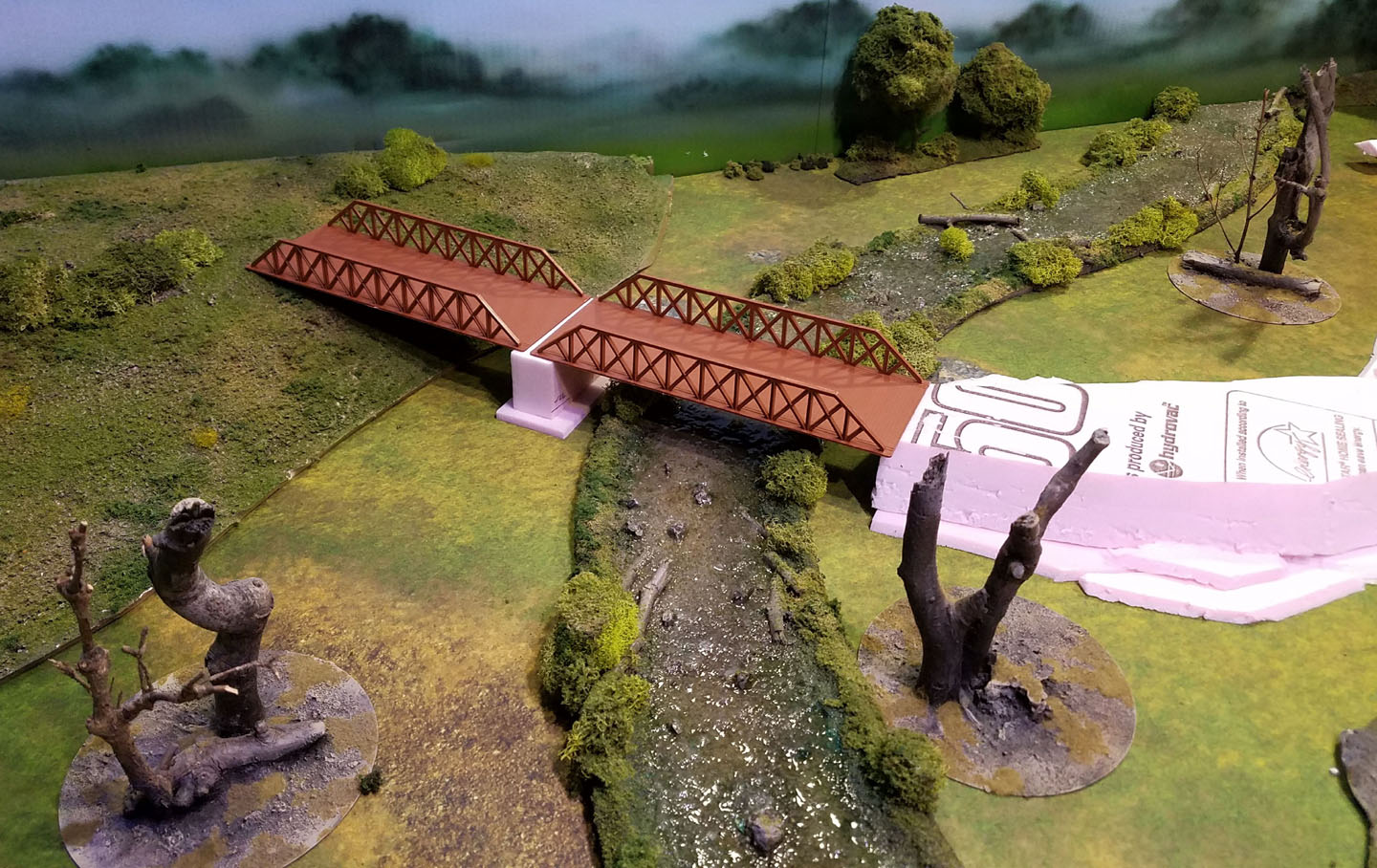 While I was flocking the main ridgeline/road terrain piece, I thought I could spruce up these old pieces and see if they would work. Originally, these were designed for a game system where figures could really interact directly with terrain.  That is why the whole piece is relatively flat.  However, that makes it perfect for this task, and by adding some bushes to it, it will break up the round profile and make it better suited for Bolt Action.

It will reflect the rough terrain that I want, but also offer more cover for entire squads.  The other game system had figures which were much larger, and fewer minis as well. 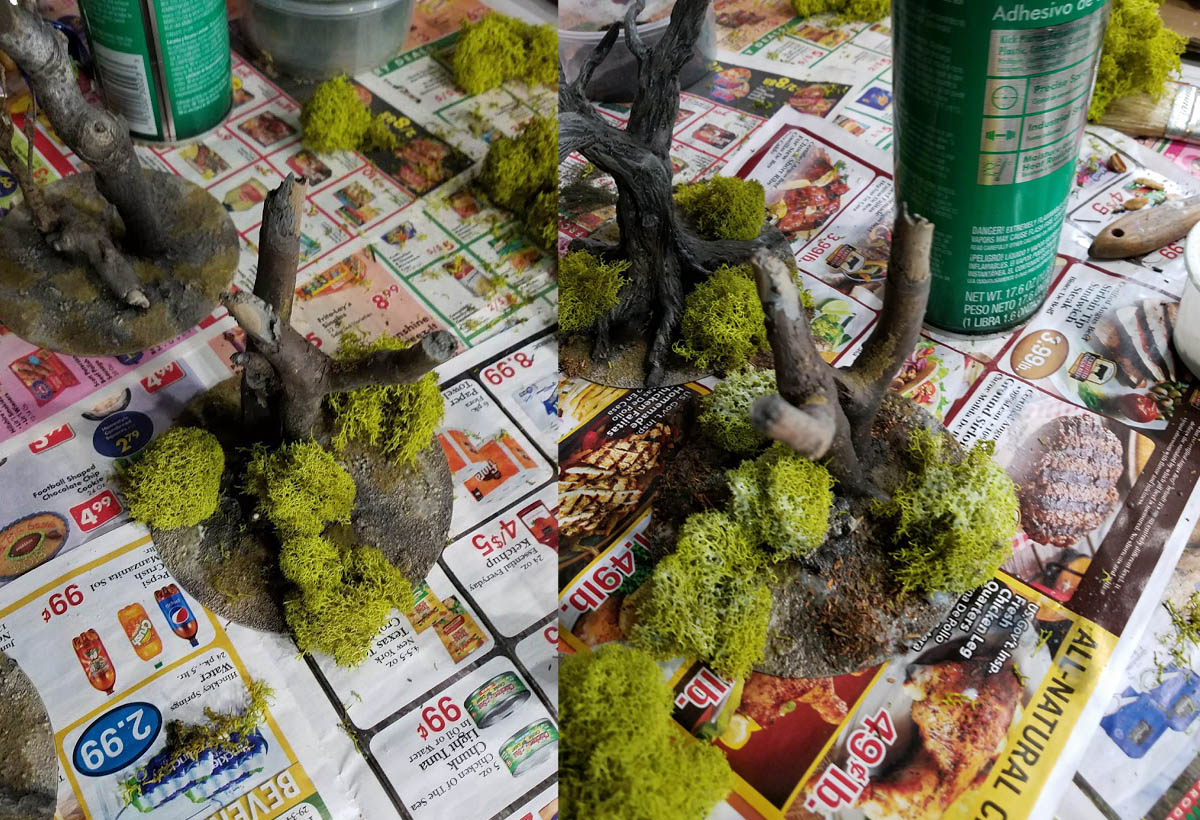 It didn't take long to have some nice greenery placed on the bases, which were old DVD plastic protective pieces.  Those date back to the Painting Pyramid video series, where I had to burn and label over 1300 DVD's! 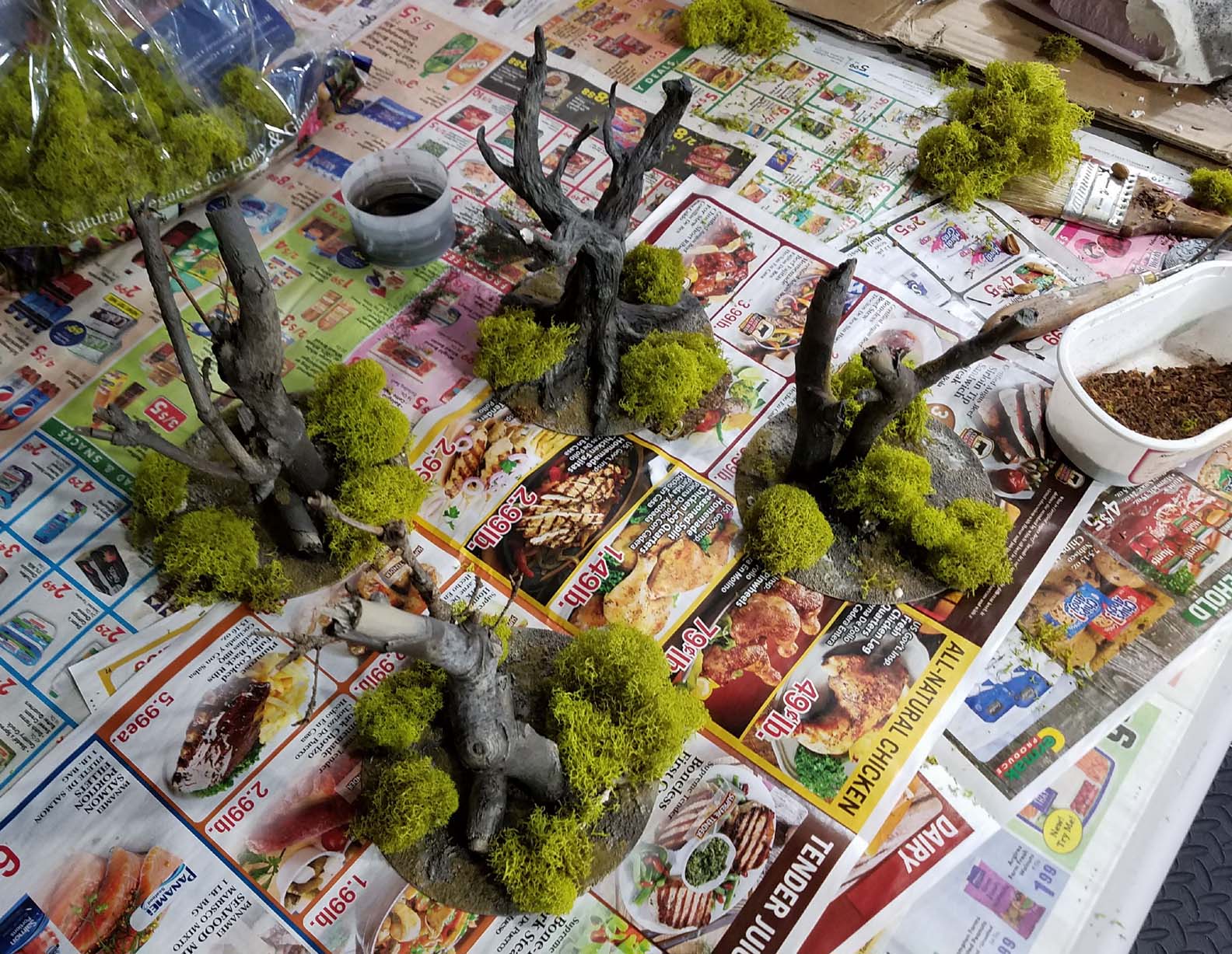 Following the same process you have seen in the other foliage posts, I sprayed the moss with the water and glue mix through the misting spray device and added a few colors and textures. 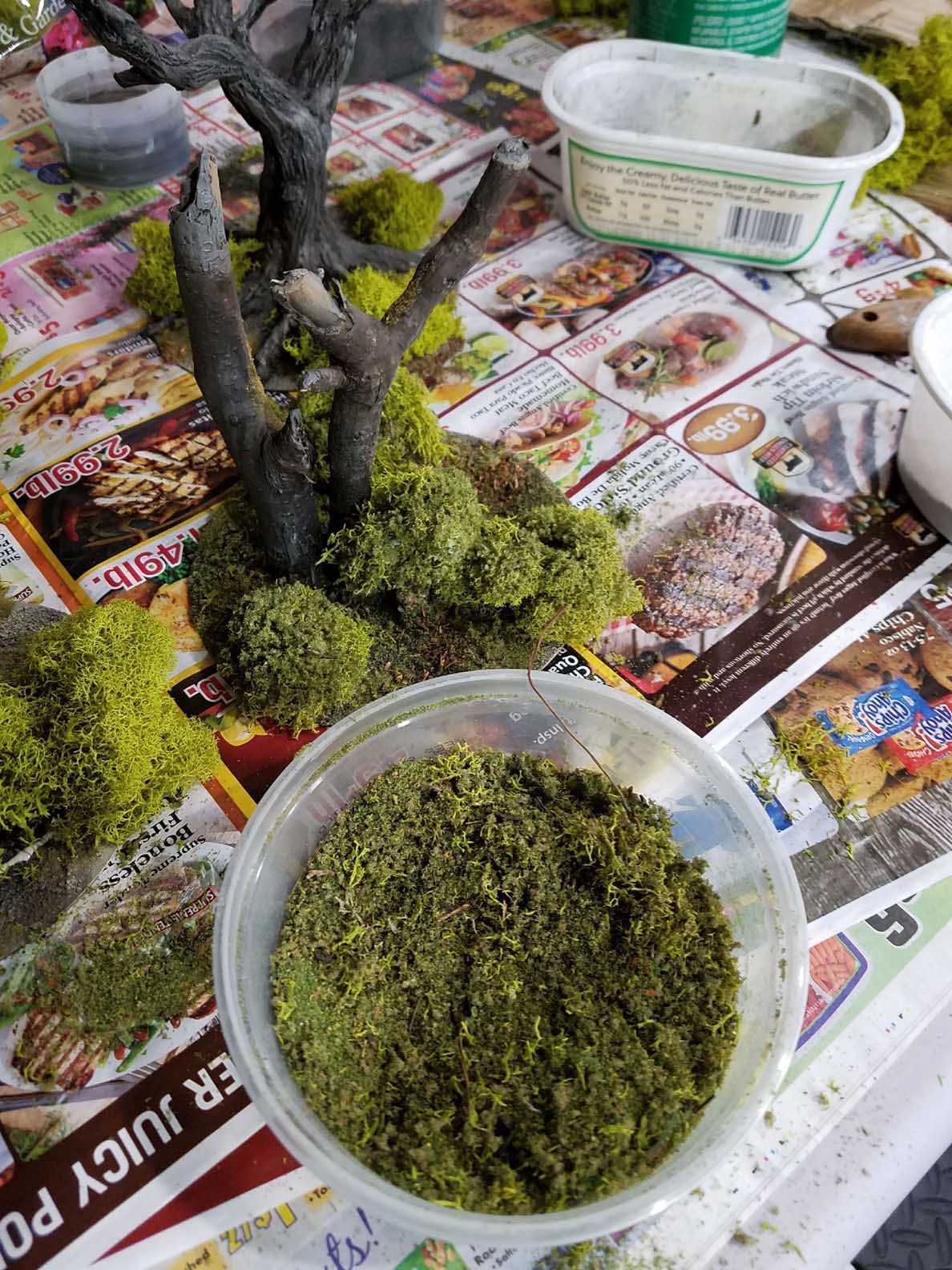 The initial layers are done by mixing the fine, dark brown flock with the scraps of greenish flock, followed by lighter layers of fluffier green flock.  This will "shade" the plain bright green moss, almost as if you were painting miniature bushes. 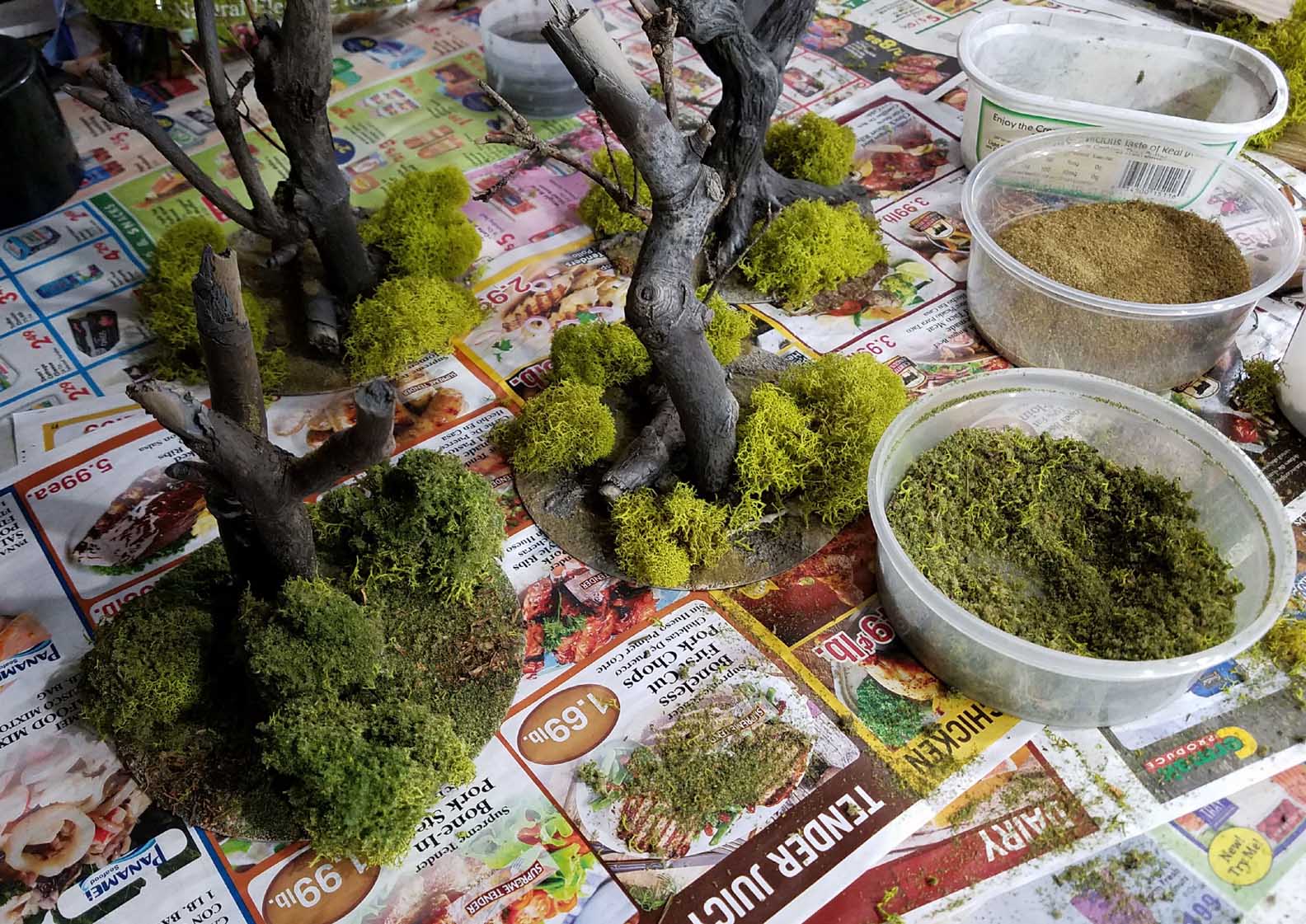 You can see the difference this makes, especially when you carry the fine green flock up the sides of the trees like moss... ironic, I know! 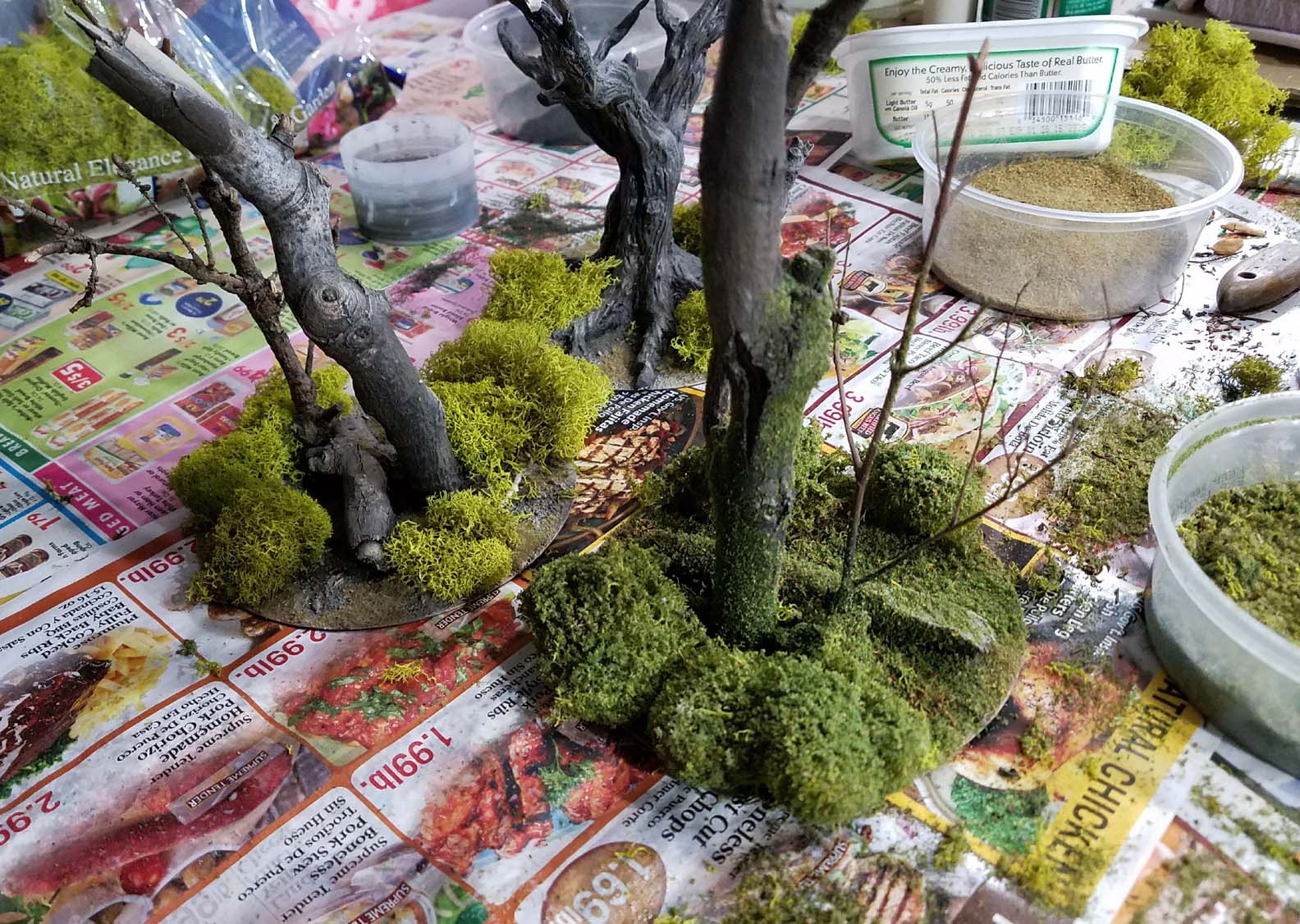 I didn't forget to add my loose leaf tea "deadfall" however!  In the next post, you will see how this brownish color will blend in perfectly with the battle mat! 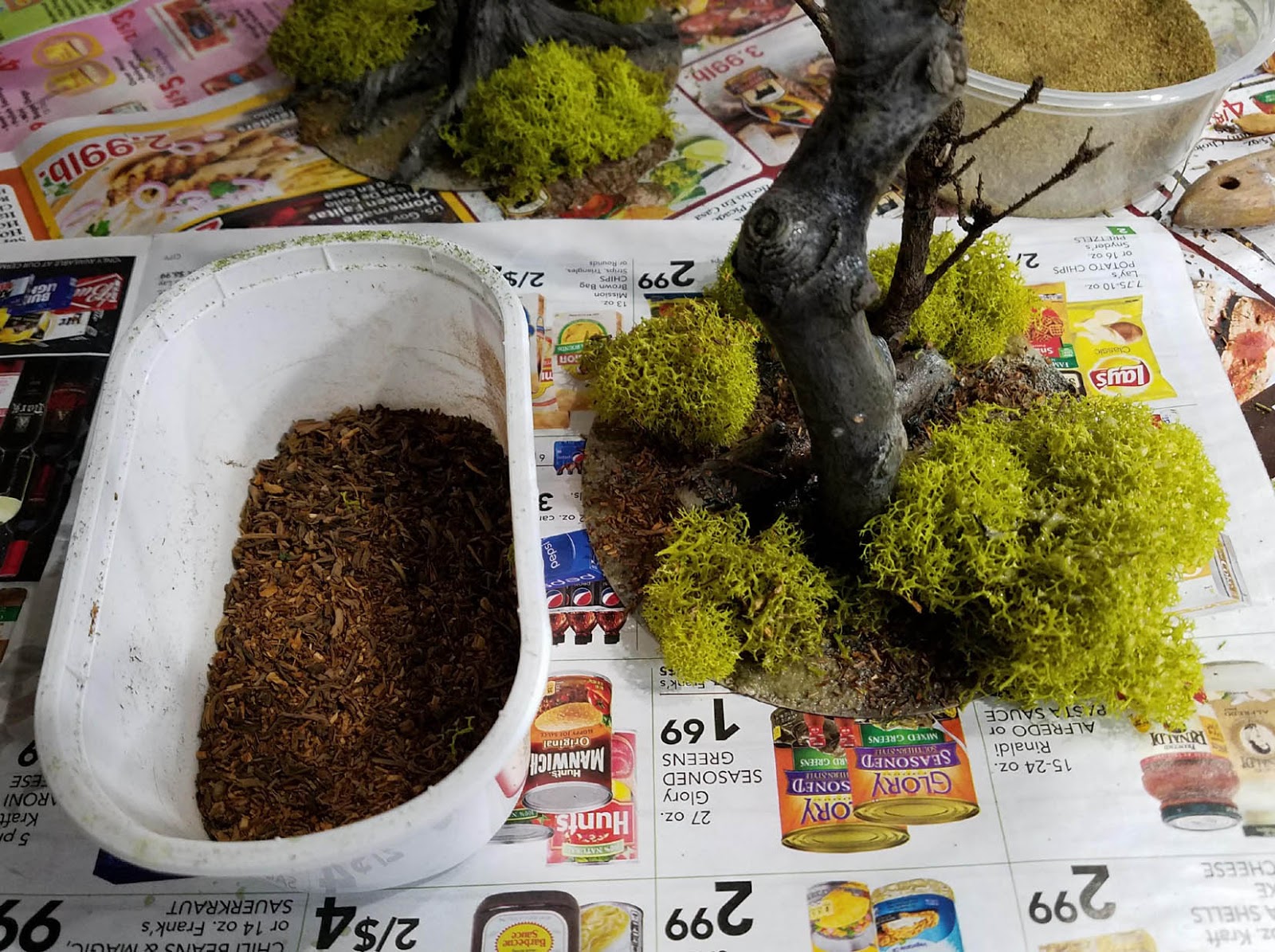 This piece is my favorite, as it is a tree that I sculpted 17 years ago out of wire and Sculpey!  Originally it was designed as a photo backdrop for our minis, but we learned right away that it was better to have a simple blue/white faded backdrop for that purpose.

I had ripped it off that 'diorama', but it had been damaged after many years of neglect.  I was almost going to toss it out, but I fixed it up instead and turned it into a terrain piece for another game system.

Now it has been reborn once again! 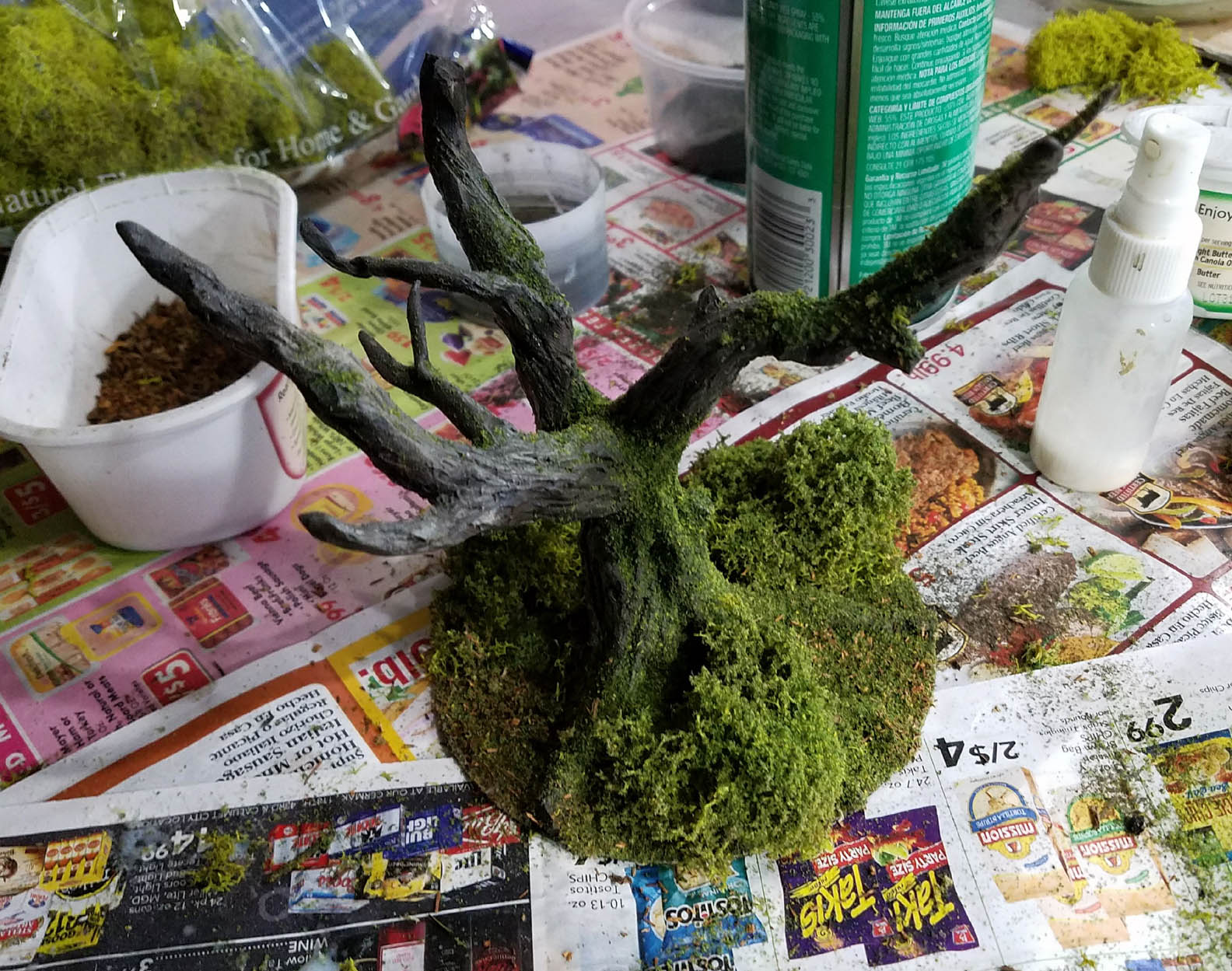 I really love how it looks now with the added flock and foliage.  In many ways, this is how I originally envisioned it... but didn't have the knowledge and experience that I do now. 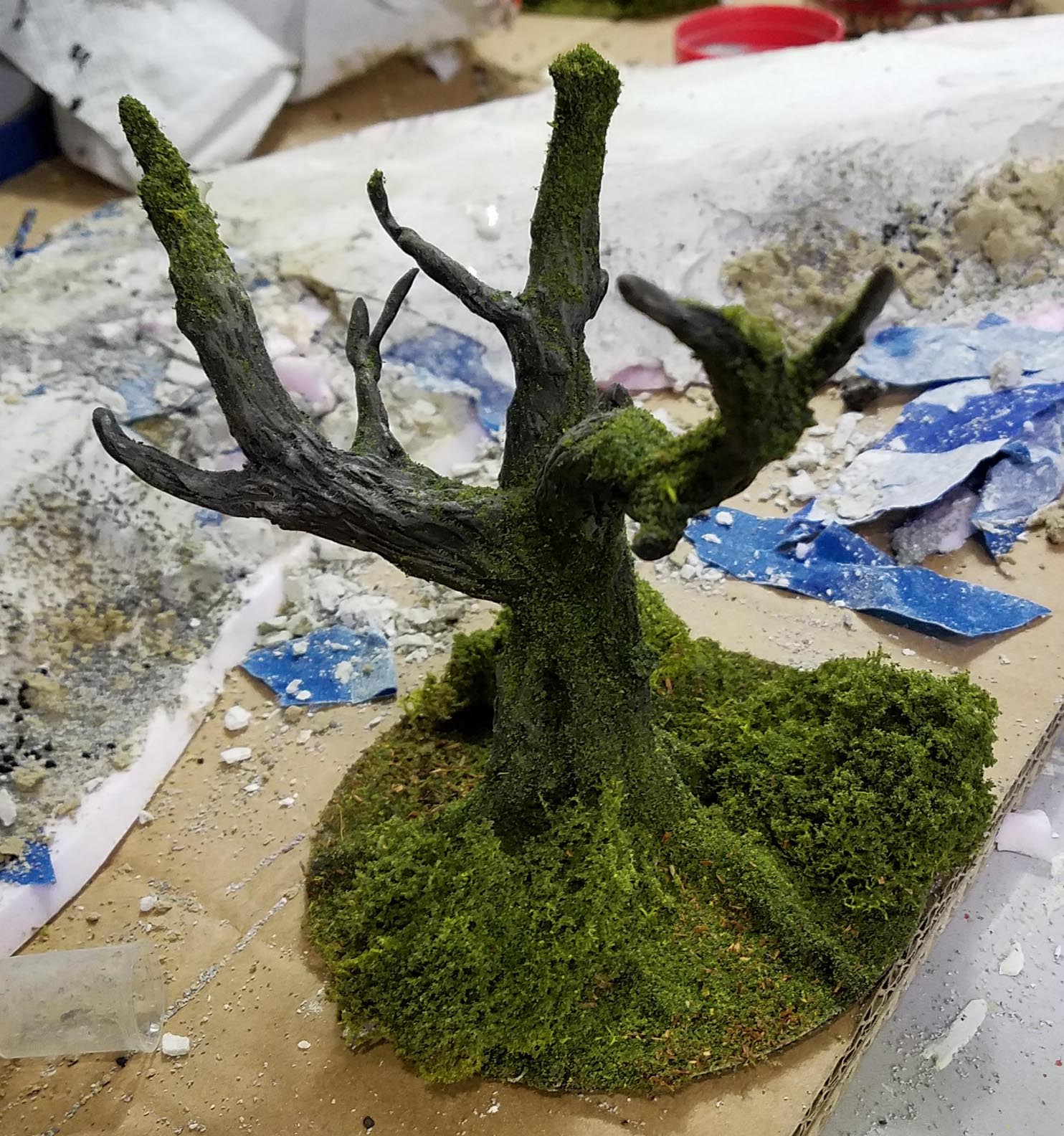 So, let's have a quick peek at our handiwork... 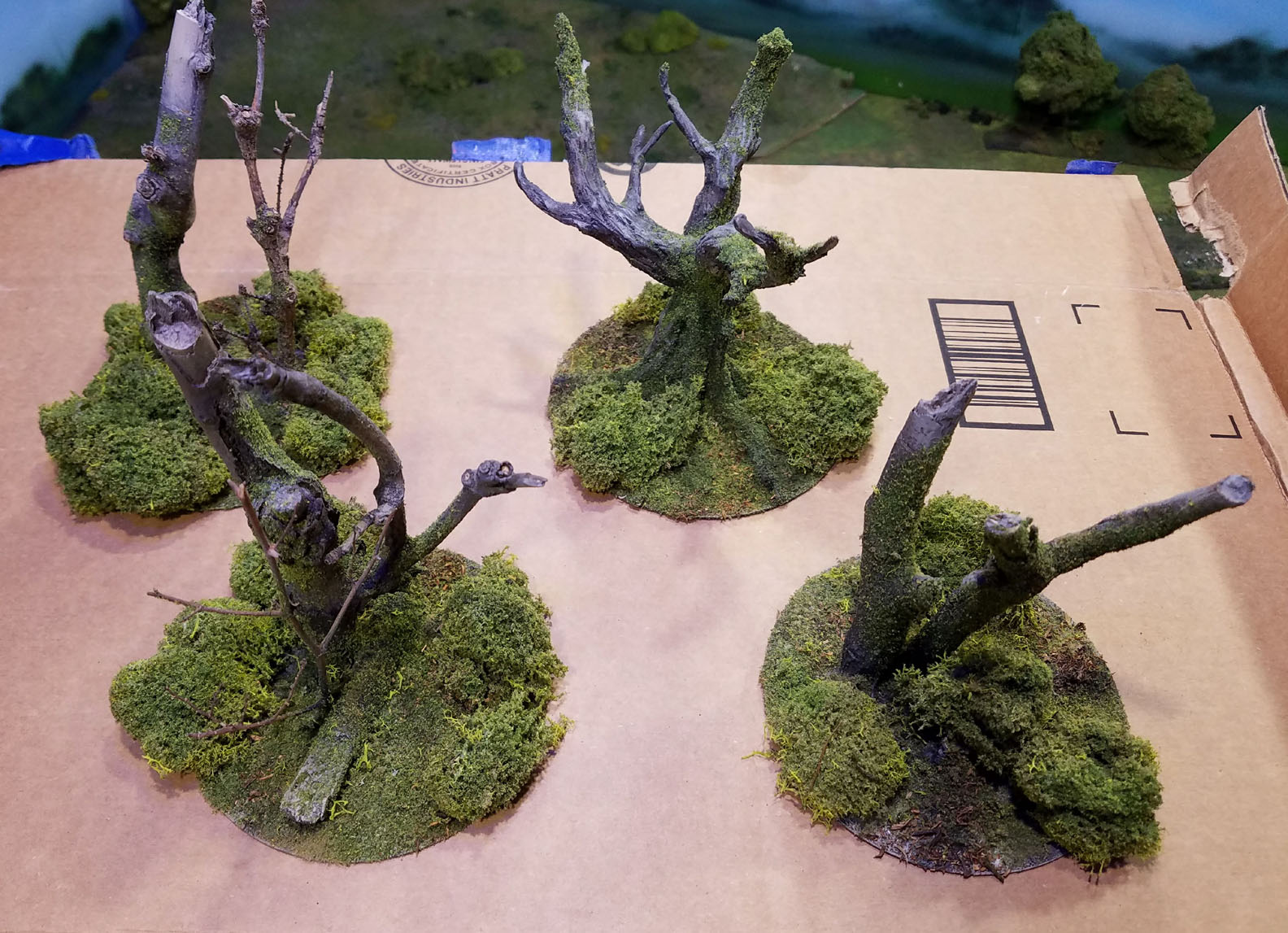 I was amazed at the transformation of these pieces, which took less than 30 minutes. 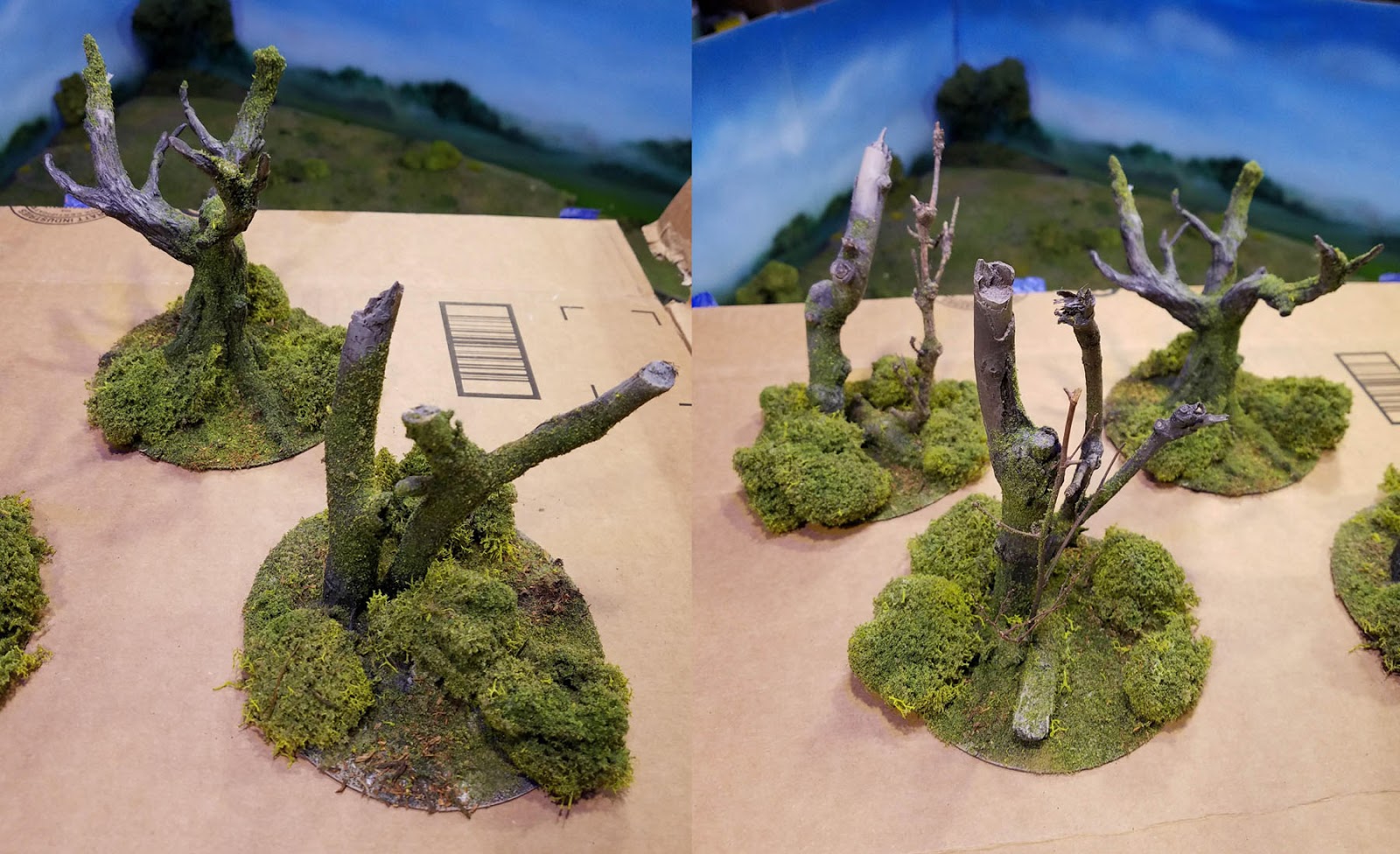 Stay tuned for the next episode, where you will see all the new pieces combined for the brand new Ardennes terrain board.  I am almost set for the next battle in the series, "The Bridge to Nouvion". 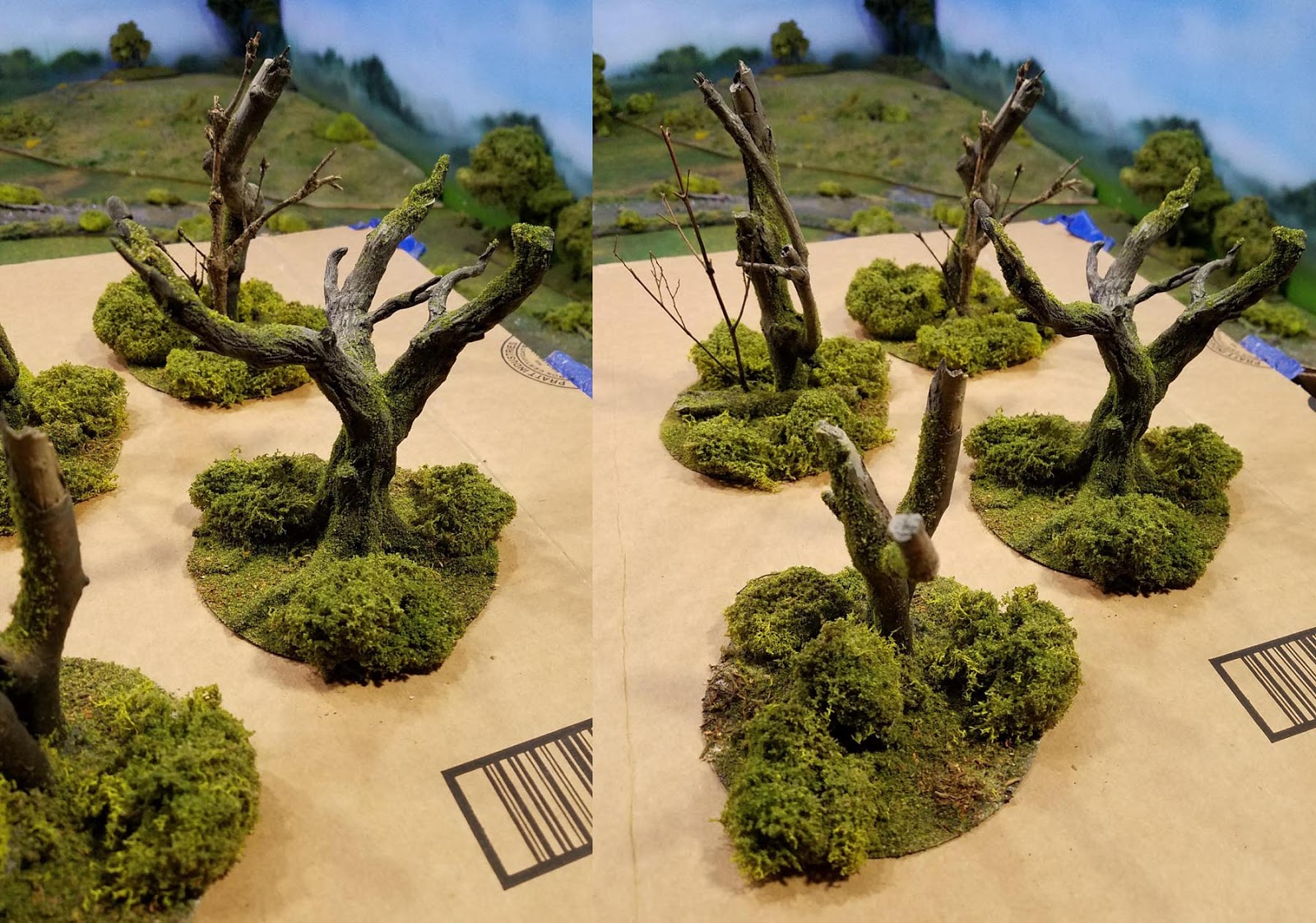 Posted by wappellious at 1:35 PM 2 comments: