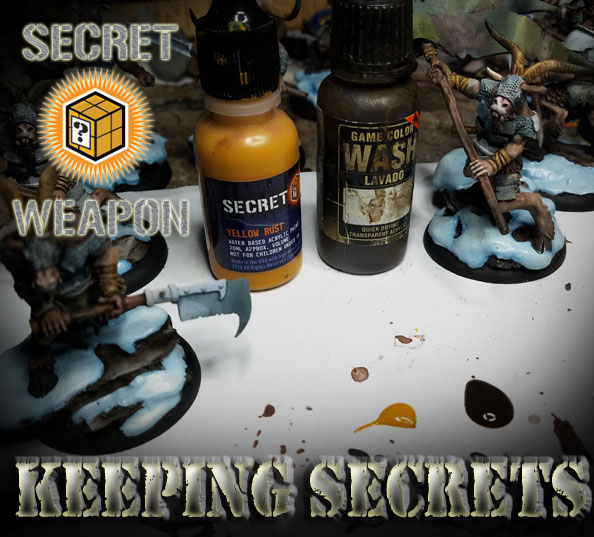 It's no secret that in the last year, I have been using the Secret Weapon paints more and more and more.  There are a number of reasons for this, but the main progenitor of this evolution in materials has to do with using the Badger airbrush products at a greater and greater level.

In particular, the use of the airbrush and Stynlrez primers  for executing my Shaded Basecoat technique on a massive scale has meant a corresponding rise in the amount of glazing that must be done.

Since the Secret Weapon paints are designed with glazing in mind, they are the ideal material to go along with the Reaper Clear paints and the Reaper Liner paints. 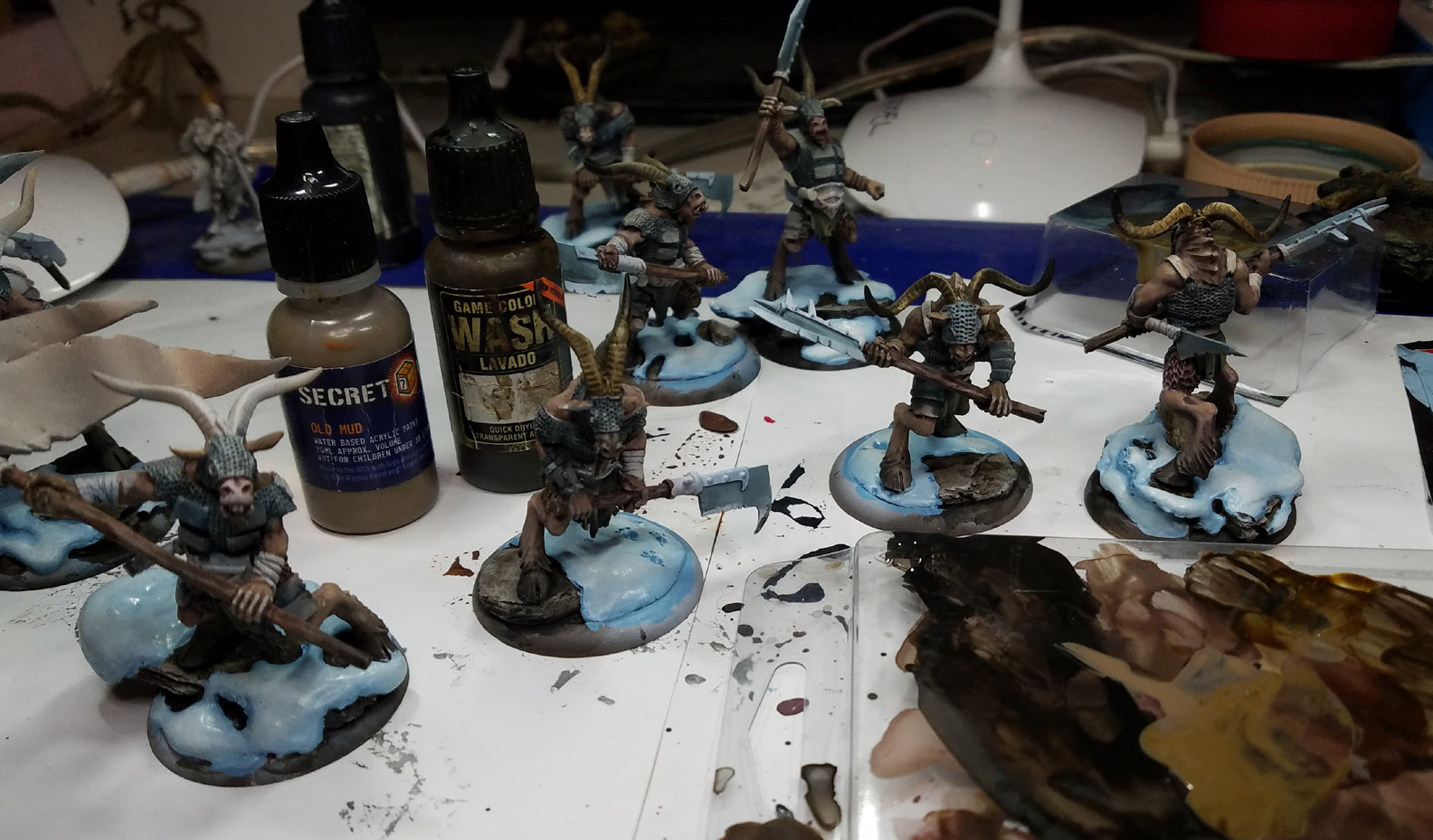 This banner is a classic example, where a watercolor style technique was utilized with a variety of Secret Weapon weathering paints. 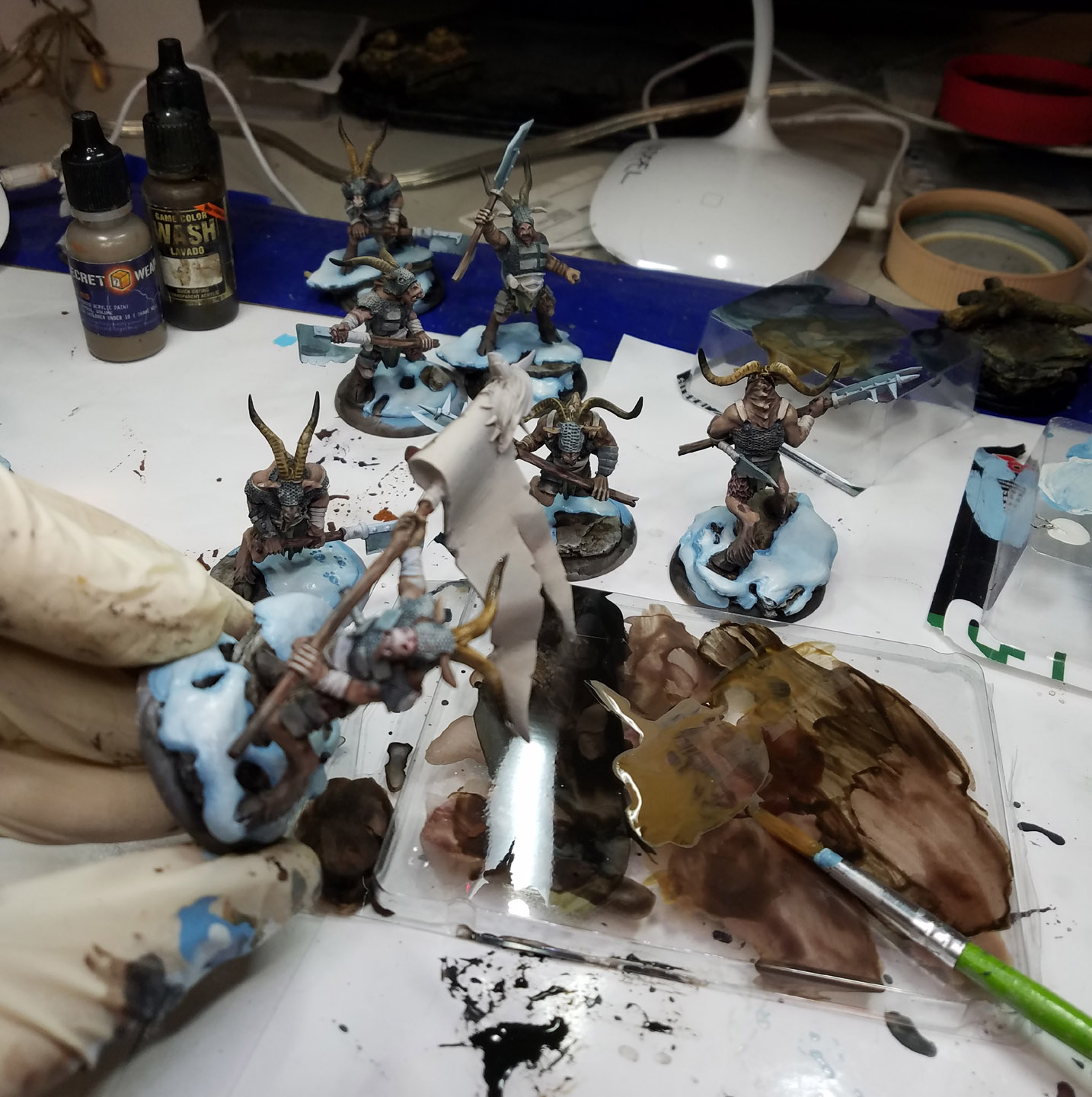 While this looks like complete chaos, the paints are actually designed to work this way.  That is, have a moistened surface and 'drop' the paints into it, allowing them to mix on their own to create some very nice random effects.   This is particularly useful on any kind of worn or weathered surface, such as this banner. 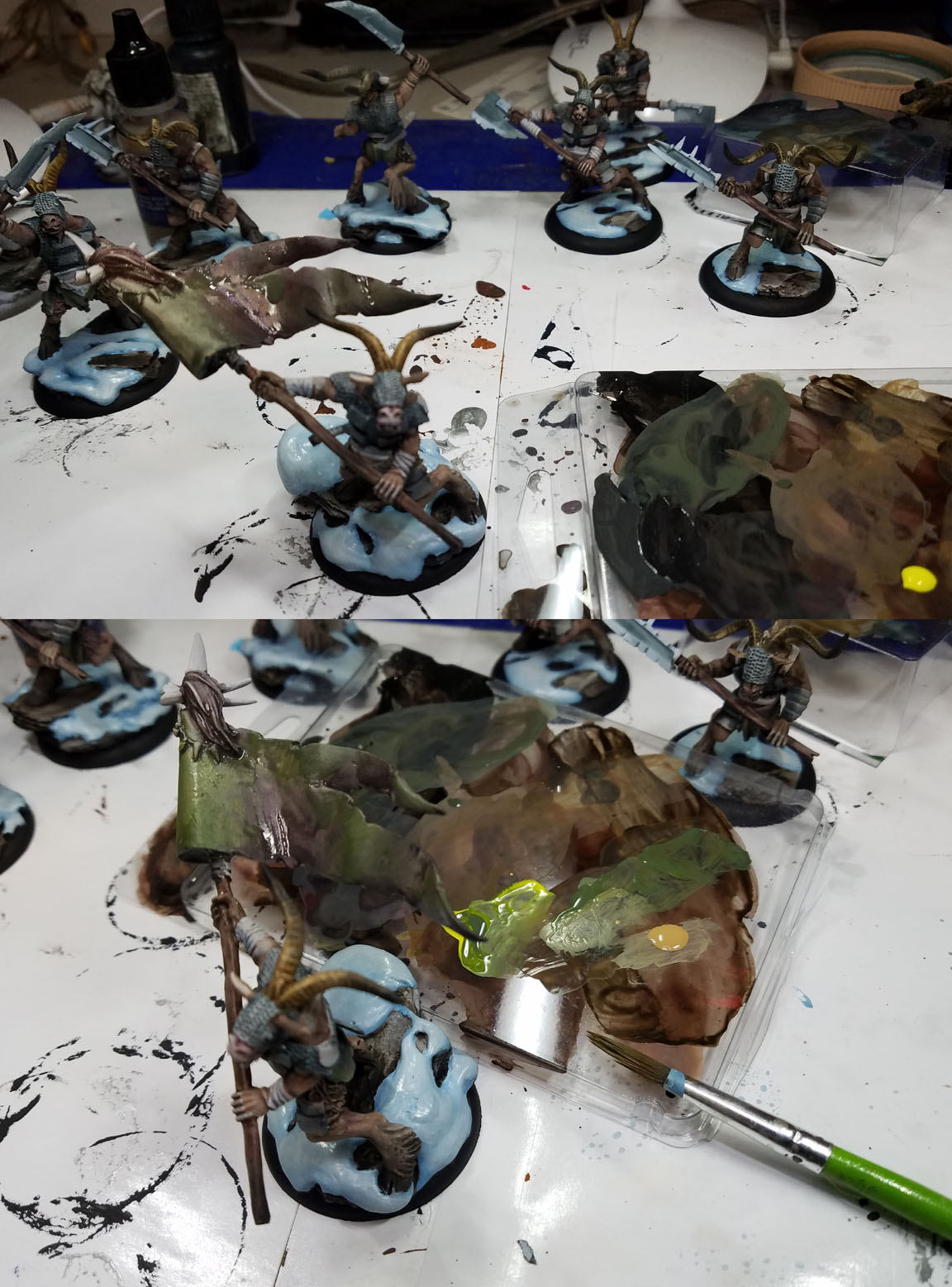 Once the paint dries, you can see that it levels off on its own, and makes some wonderful subtle effects. 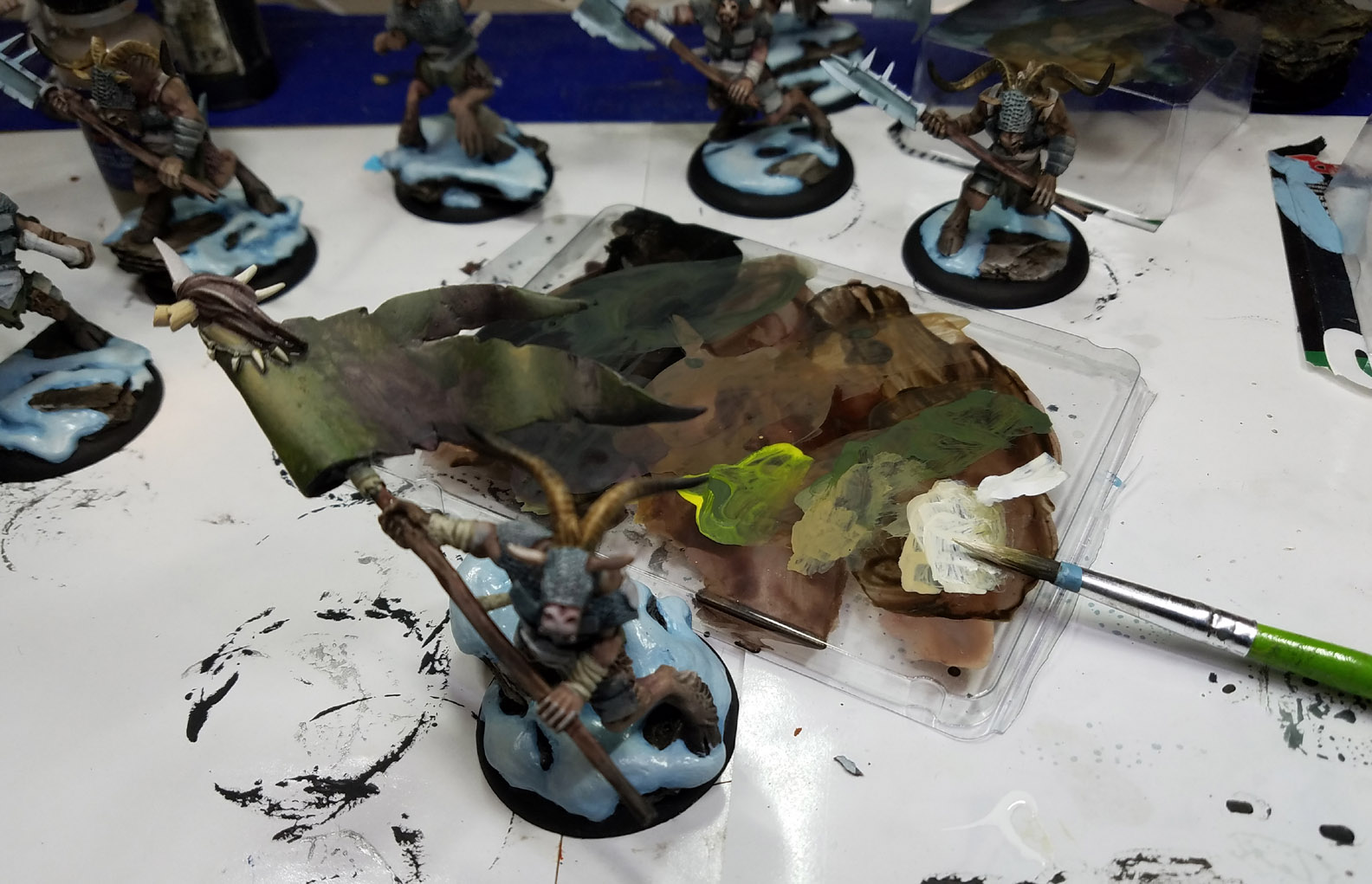 This article will continue on with some of the glazing process, as I further enhance and deepen the shadows in the metals. 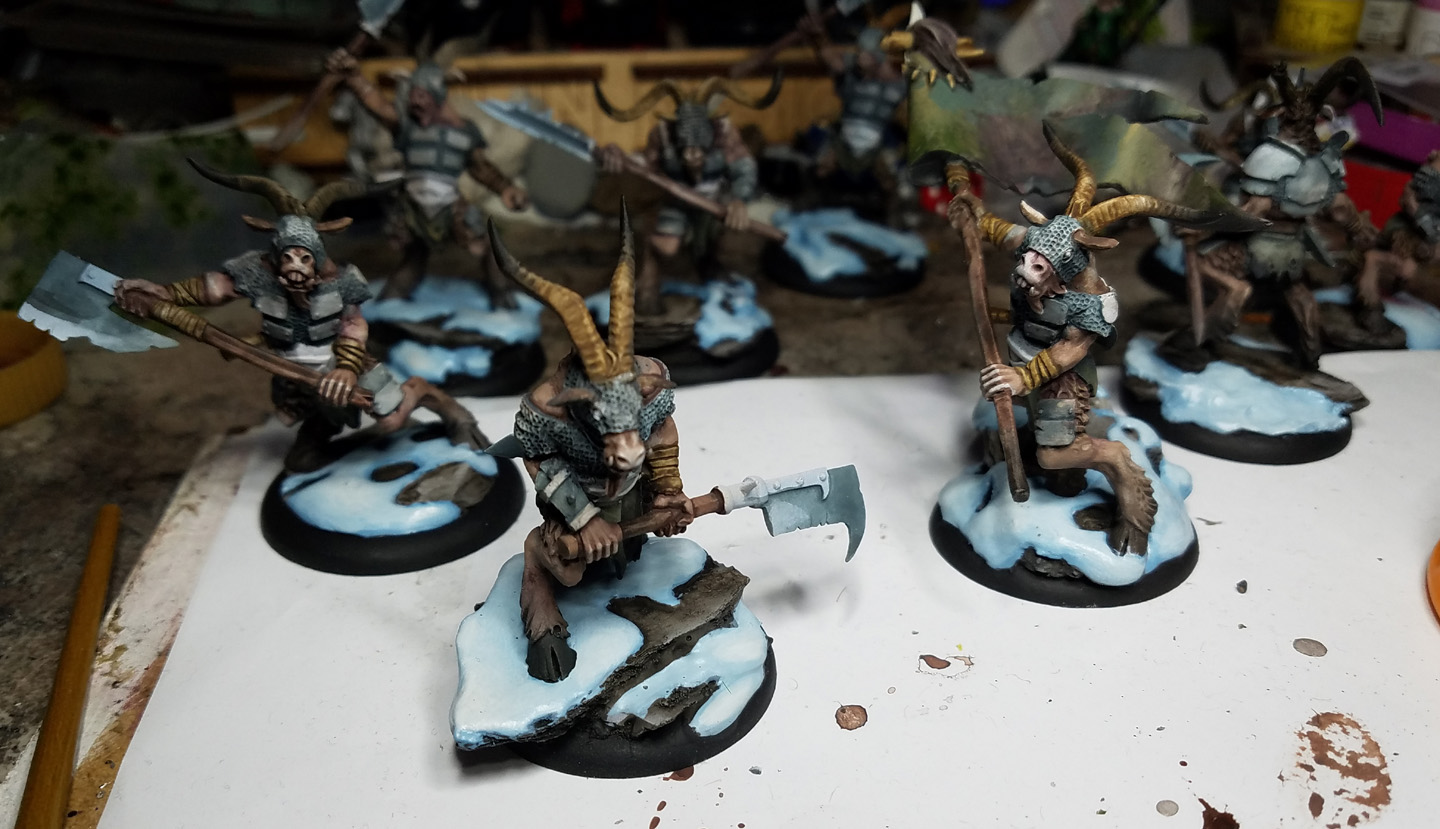 Anyone who has seen my Glazing video knows that I love to mix lighter 'opaque' paints with mediums such as the Vallejo washes.  This will create a semi-opaque color which is fantastic for various shades in the "middle tone" region.

When mixed, the lighter opaque color becomes 'suspended' in that wash medium, and it allows me to do some interesting things. 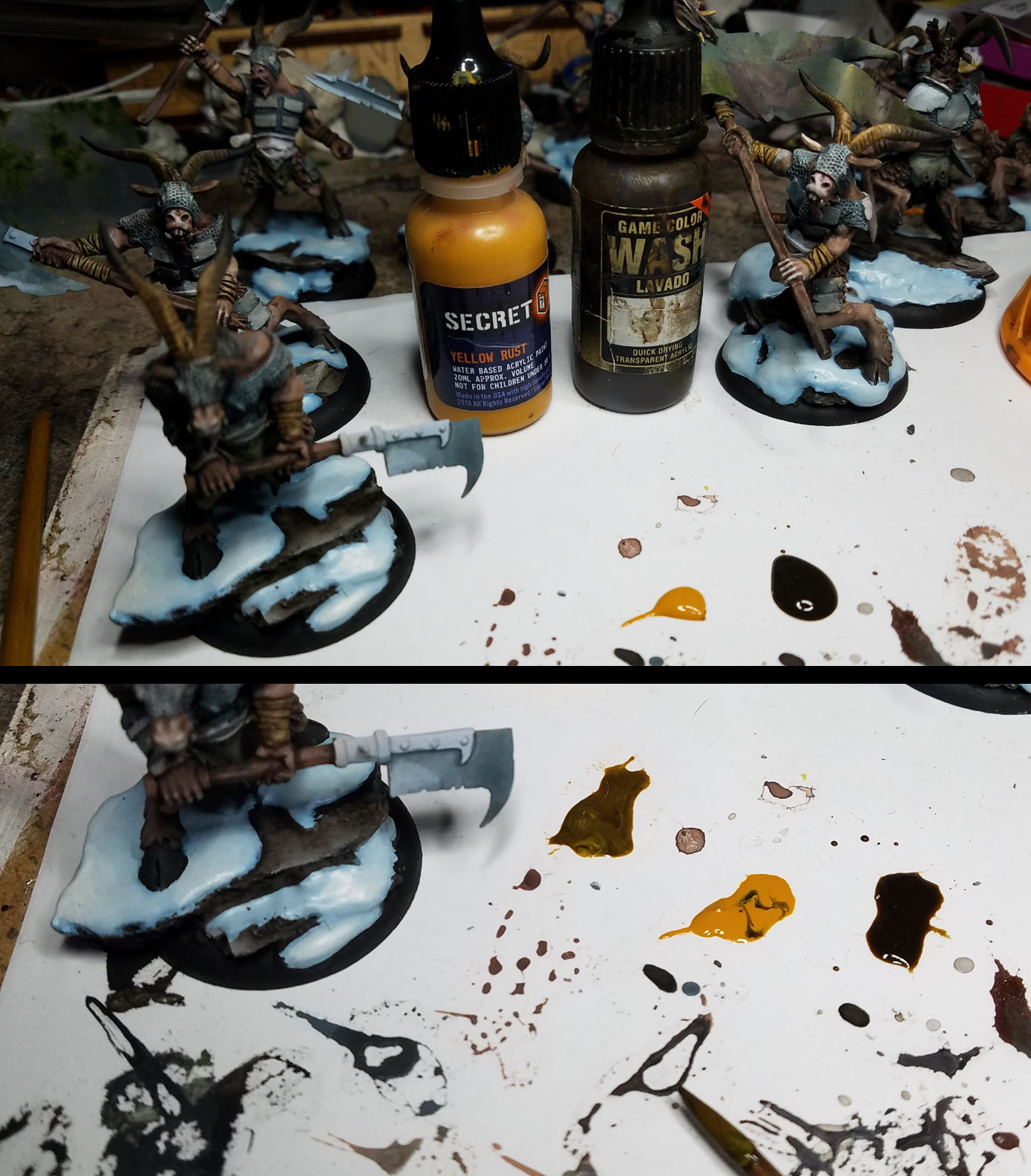 You can see how the handle of the weapon has been painted with this 'wash', and how I have some interesting color variations right off the bat to emphasize with further weathering. 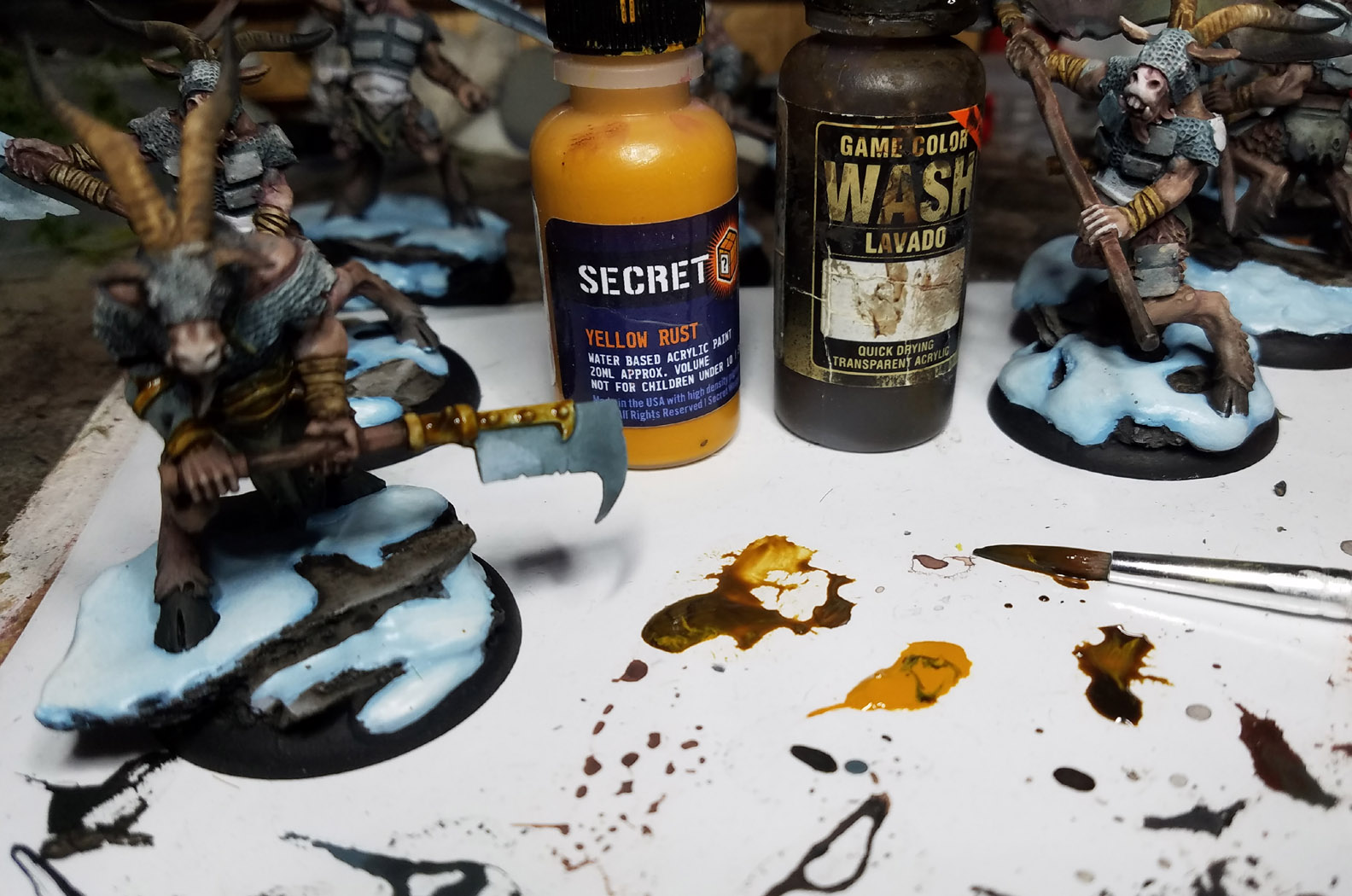 I did this on all of the beastmen's weapons and loincloth plates.

Then I took that mix a little further by adding some seafoam green to it, as shown in the right hand image.  As that previous layer was still wet, I could go back in and add several new lighter tones... but they were all semi-translucent.

Yes, a light wash or glaze can actually be a lighter color!

Now to darken the metals.  I used one of the deeper slate blue colors from Secret Weapon, along with Blue Liner paint from Reaper.  These blueish tones would be essential for making the secondary applications of rust look that much "warmer".  The color temperature game is very important if you want subtle forms of contrast! 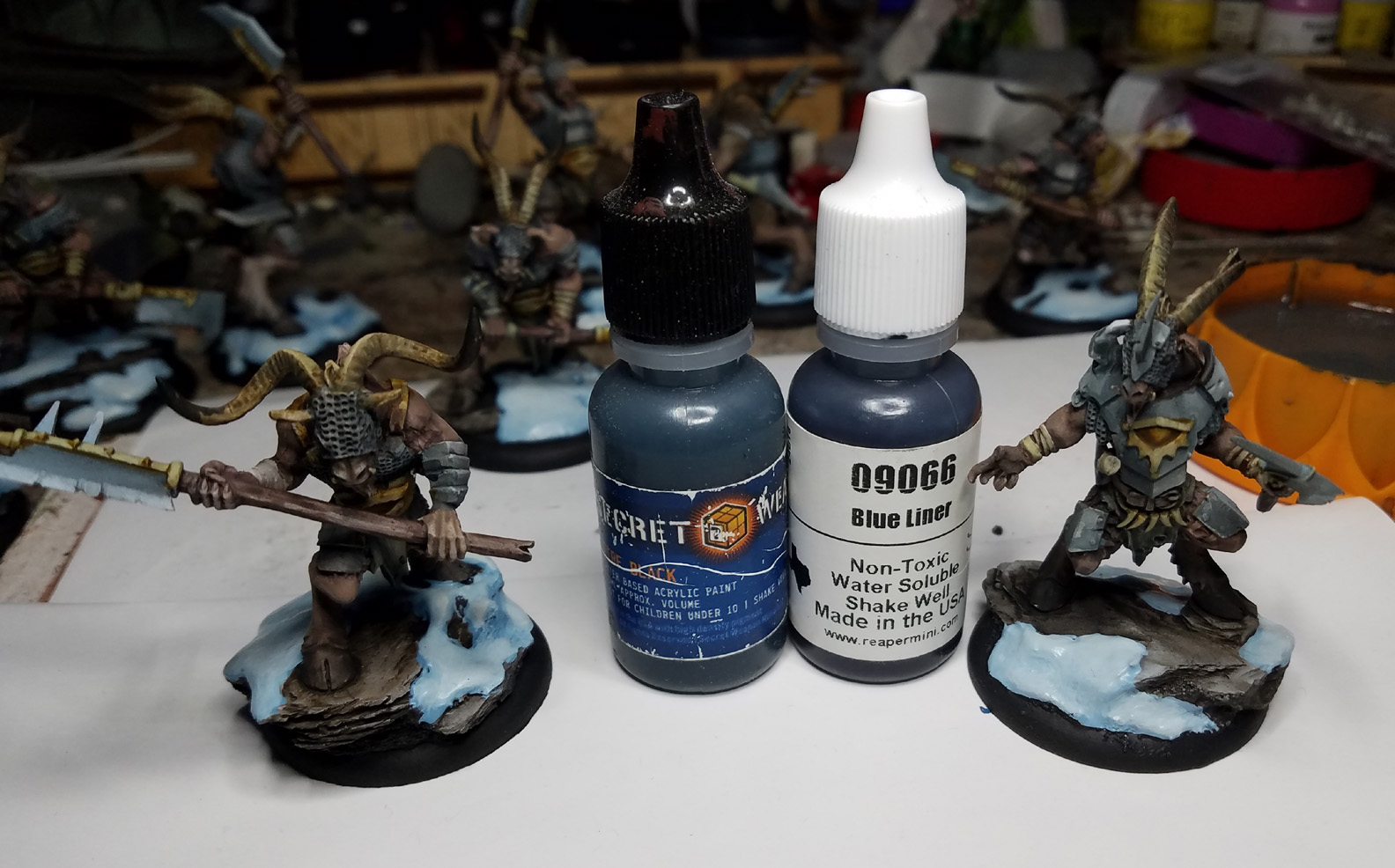 Both of these colors can be thinned down to very extreme levels, which is why I like them so much.  As the initial glaze of the medium Secret Weapon dark was still wet, I could introduce a bit of the Blue Liner into the deepest crevices.  I will be doing a technique like this in reverse when it comes time to add that rust.

After all the metals had been completed, I went back in to some of the fur and skin areas that needed a similar addition of darker glazes.  This was mostly done with the Reaper Brown Liner paint.  I could glaze in very targeted zones where I needed the deepest shadows.

I also love my Vallejo fluorescent colors!  I have many blog posts that cover these, as well as a few of my Painting Pyramid series.  Ask me about the Object Source Lighting video and the You might even say it Glows video, which covers the fluorescent paint in even more depth.

After adding the semi-fluorescent Eye of Balor to the belt pieces (which was done on all the other figures from this particular army), I was ready to move on to some weathering of the metals!  Stay tuned for the next episode which will cover that in depth.

As always, any contribution to the Patreon Fund is appreciated, and allows me to create more of these how to articles.  These take a lot more time to create than most blog posts, as I try to retrace my steps into something that is concise and useful! 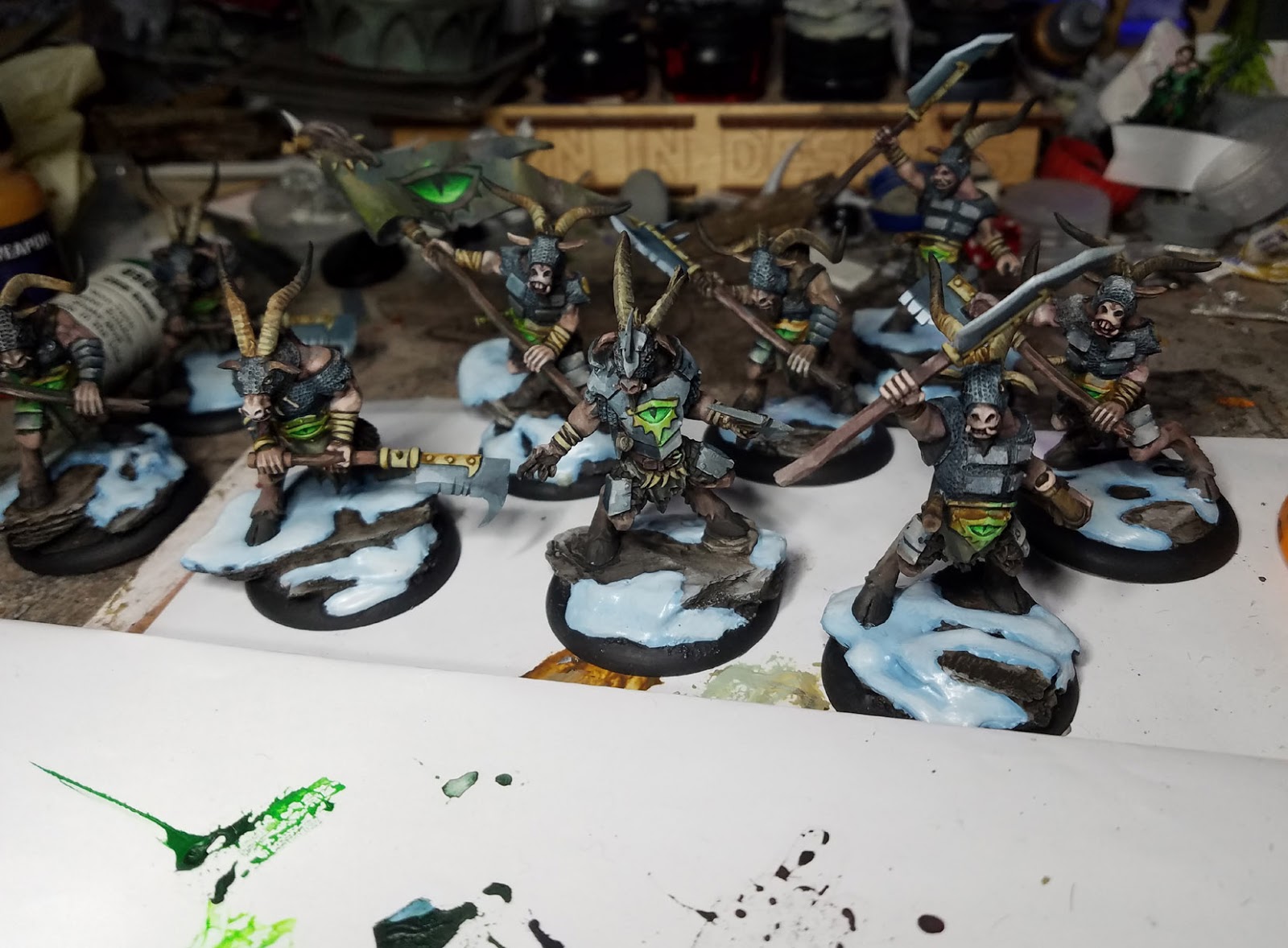