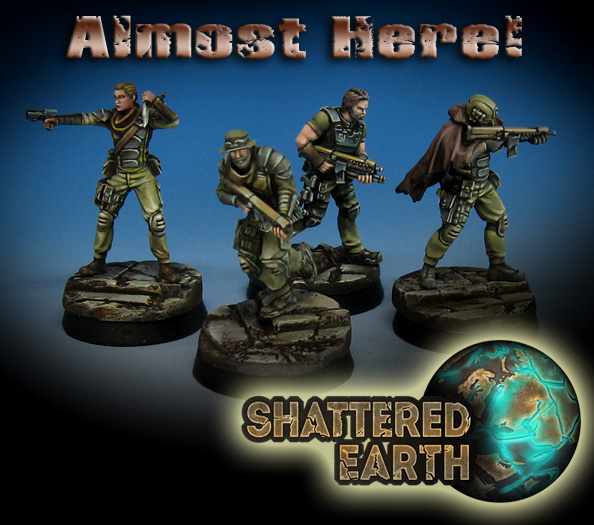 Here's another look at the Shattered Earth Coyote troopers.  It's always fun to see these guys in a group setting.  The bases were some nice Urban Rubble from Secret Weapon Miniatures.  They are 25mm, so that gives you an idea of the scale on the figures. 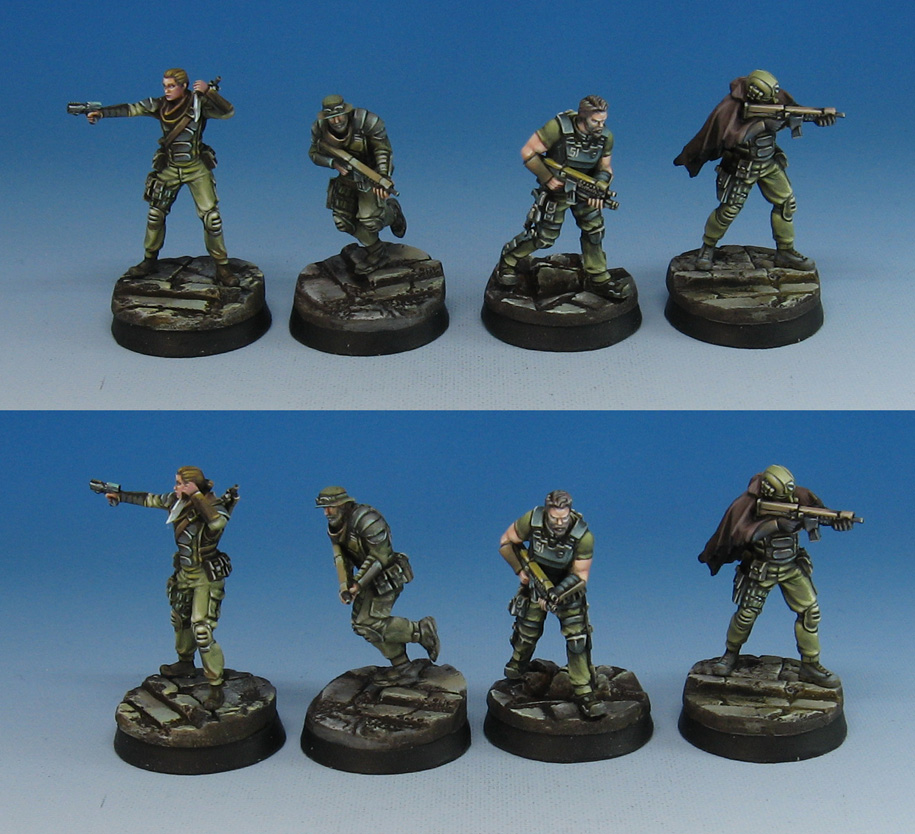 The hands are true scale, not heroic.  They were so realistic, it was a bit scary!! 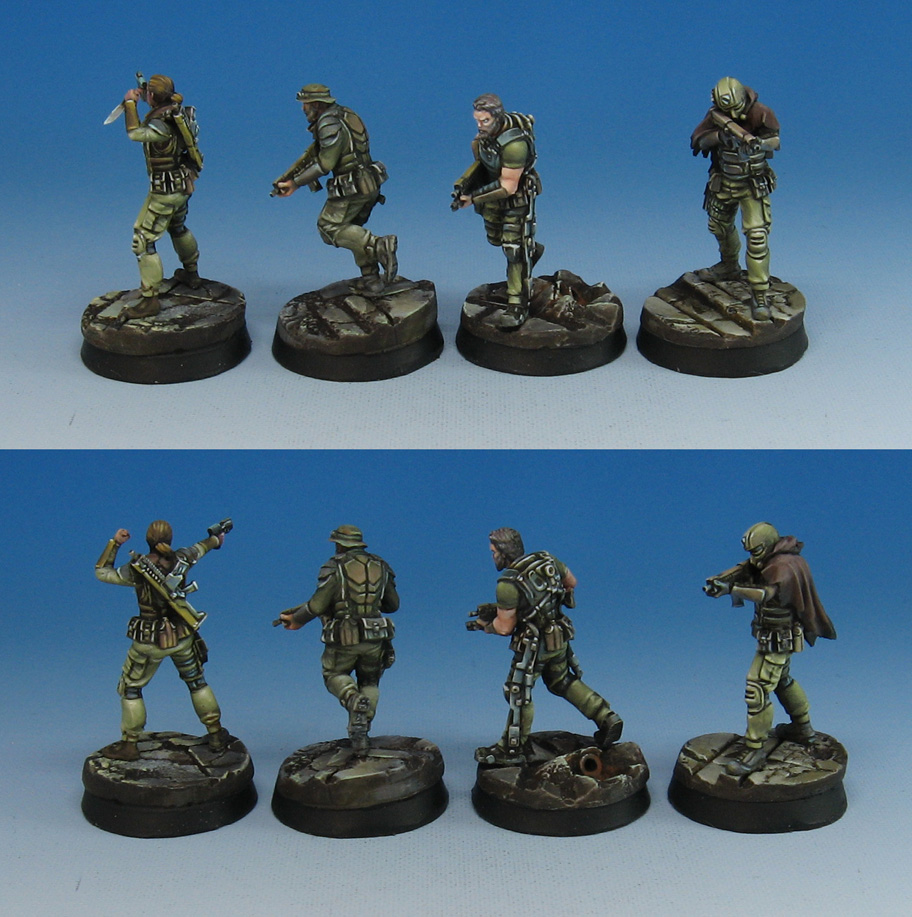 There is also a nice variety of poses.  Add to that the various options for the heads (helmets, hats, etc.), you can make a very unique squad. 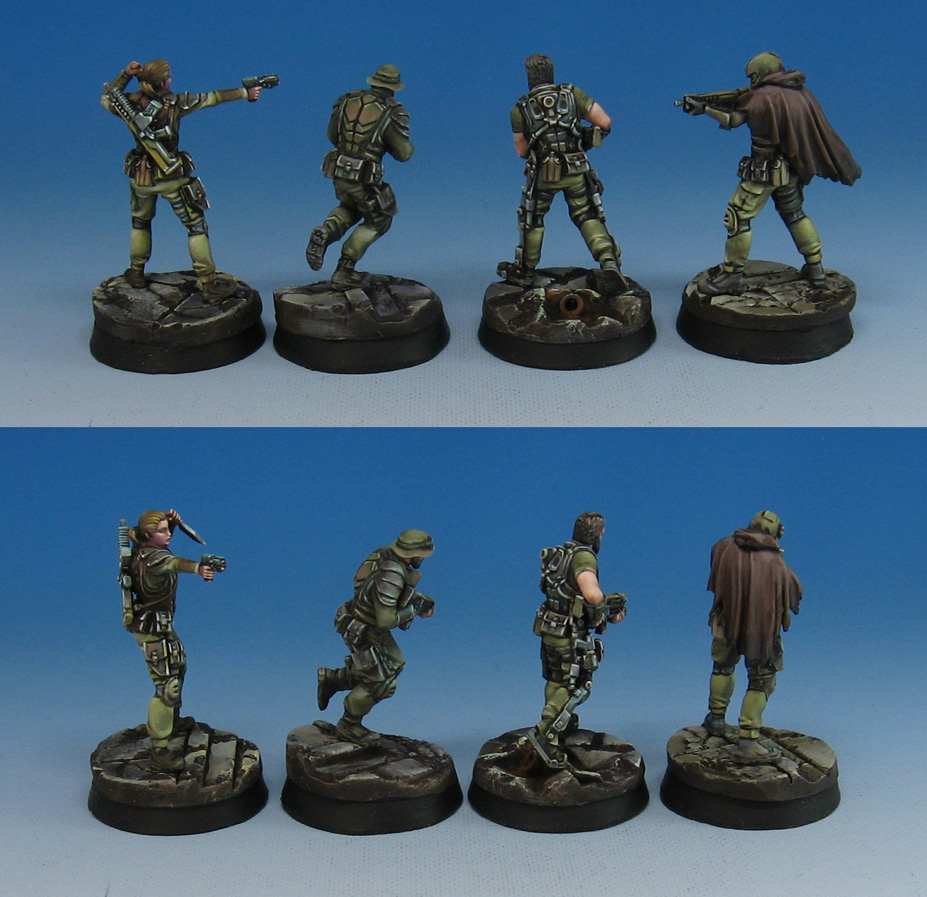 I have one more set of group shots in some terrain, which I will post when the Shattered Earth Kickstarter campaign begins in a matter of days! Stay tuned for that!  I will post links here. 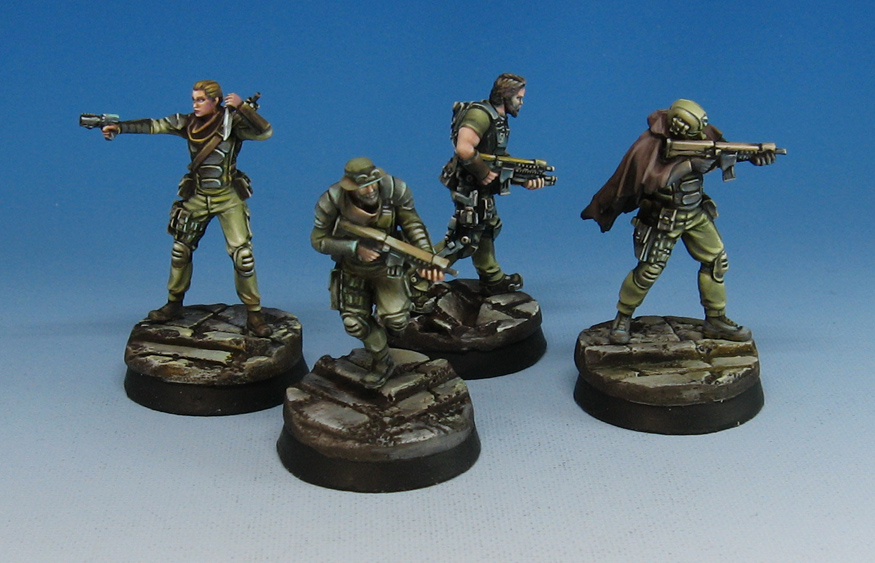 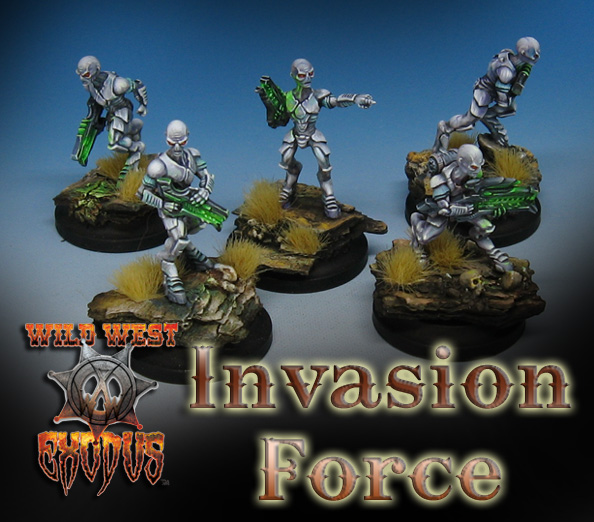 Coming to your town soon... the Alien invasion of The Watchers!

This is one of the four new factions brought to life through the Unfinished Business kickstarter campaign by Wild West Exodus. This is the first time I have seen these guys in a group setting, and I was struck by how much the colors maintain a visual interest, even though the palette was very limited.  In fact, I only used 5 colors if you include the bases. 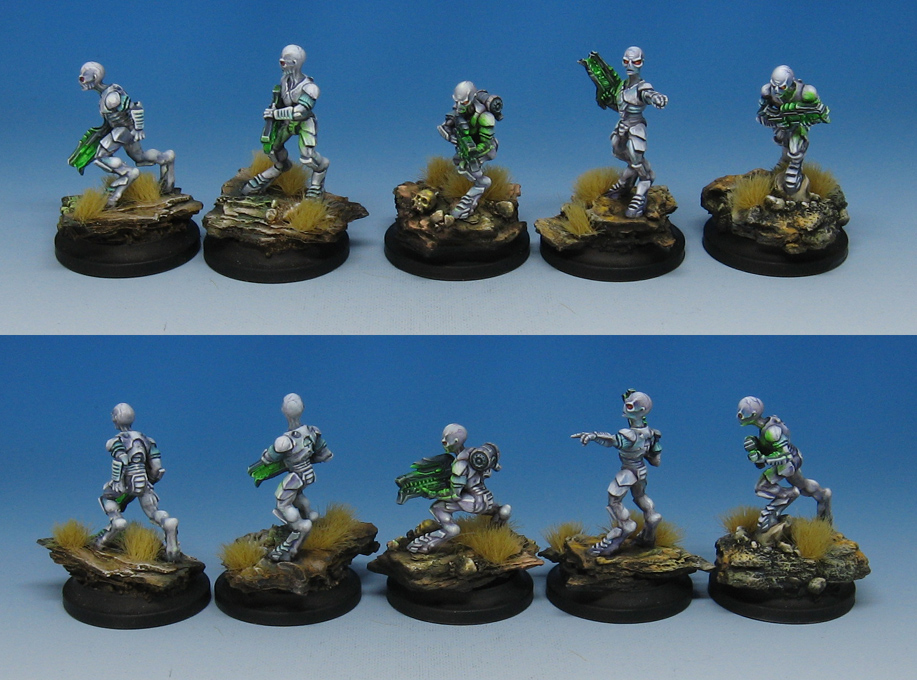 The key is in the placement, and making sure that there were no 'dead' grays.  That is, completely neutral grey that had no tone or hue whatsoever.  For the most part, I tried to create interest by positioning teal or blueish tones near some which were tinted towards purple. 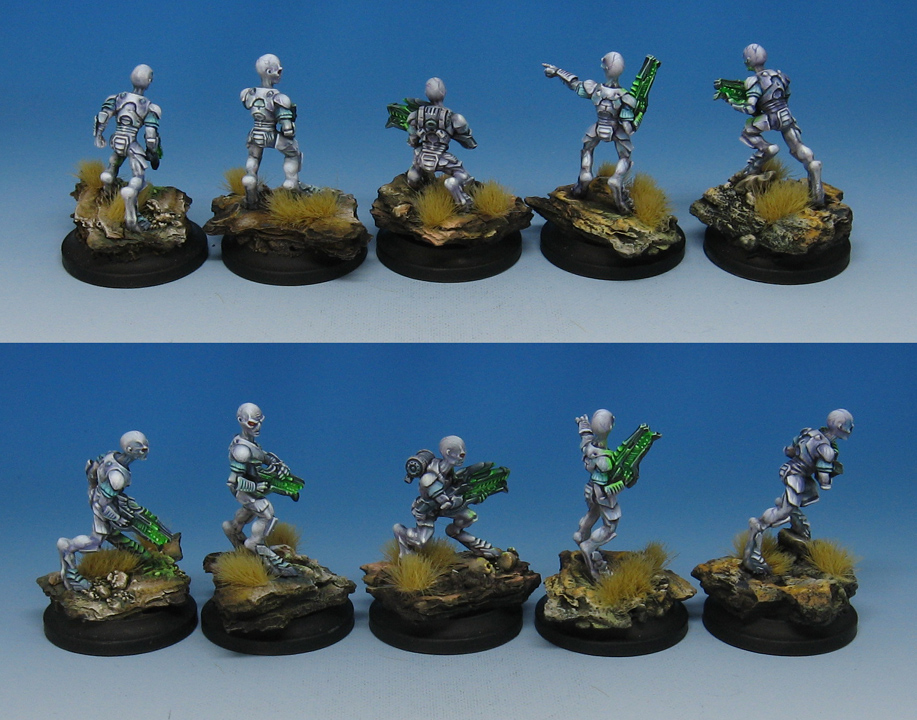 The glowing green weapons were also a nice foil to the more subdued tones.  Seeing all the weapons together is also very satisfying, since I was not sure how such an intense coloration might work with a backdrop that is very white. 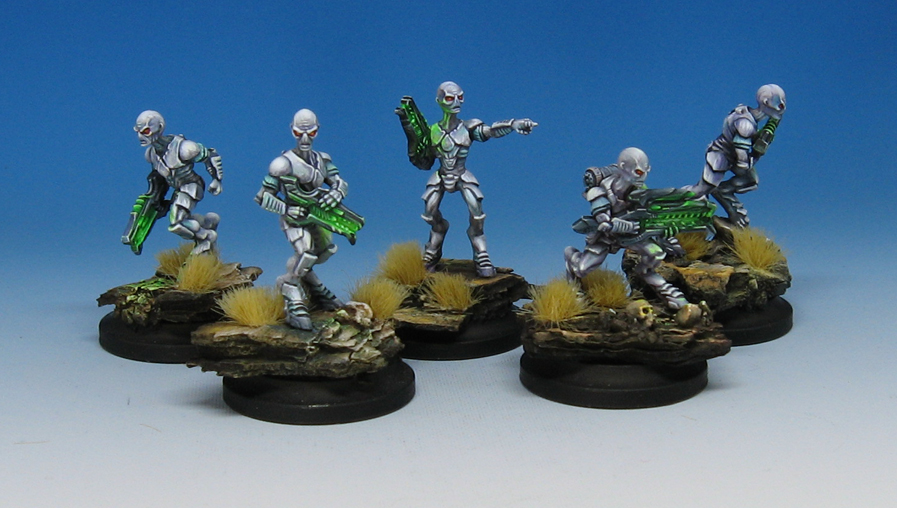 This view shows how the bases and that warm tan worked to make the grays stand out even more.  That hint of warmer tones also lessened the 'shock' of the fluorescent greens slightly. 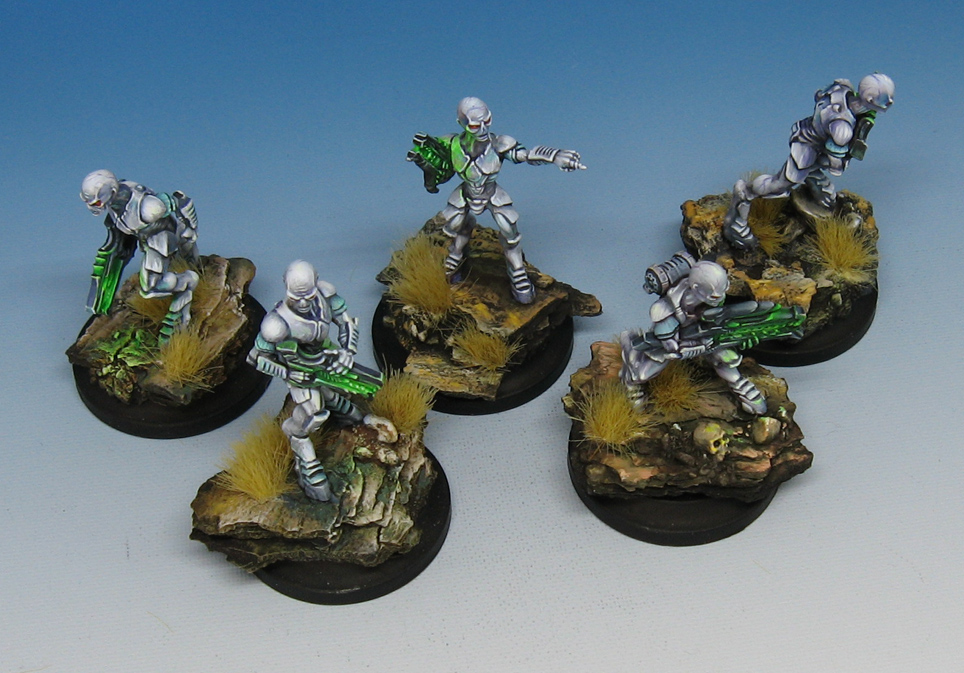 I still attempted to get a little variety in the bases, however, as you can see by comparing the slightly greenish tones for the base on the left.  The one on the right is more yellow and bright flesh tone shades. 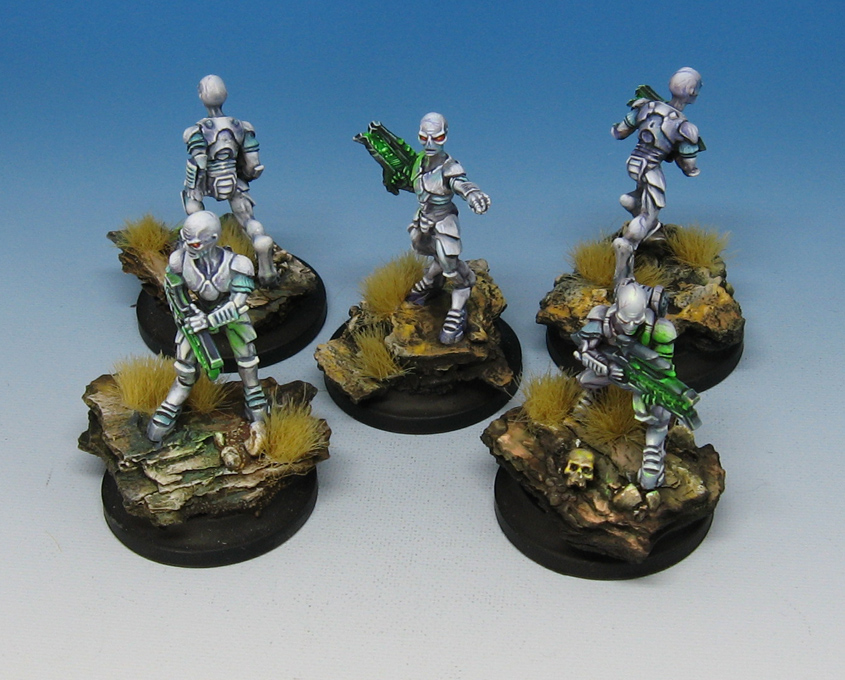 As I continue to complete this group of ten Hired Hands for the Watchers, the first Dark Nation figures are also under way.  So stay tuned out there, partner!! :-) 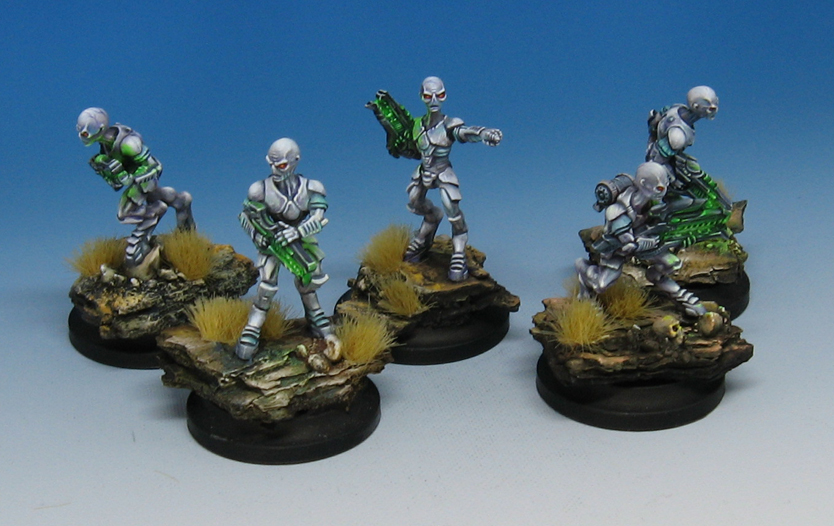 Posted by wappellious at 1:58 AM 2 comments: