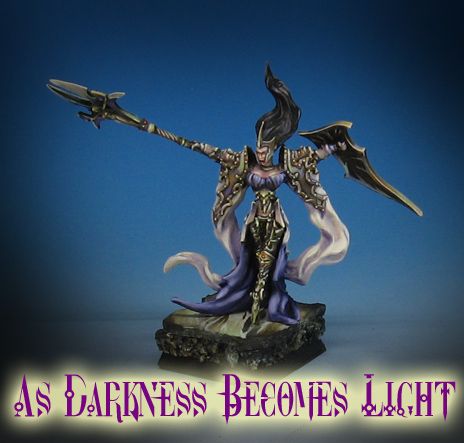 As promised, here's the Raging Heroes figure on that marble base!!
The requested color scheme was white and purple robes, more of a High Elf look than the more typical Dark Elf shades.
It was definitely a departure from the kind of color schemes I had been doing with these, and that's always a fun experiment!!
The blade was painted with the same colors that I used to paint the marble, with the Reaper Stained Olive, seafoam green and elf flesh accents.  Some of those went into the flesh tones as well, and even parts of the armor.

To shade the 'white' sections of the robes, I allowed some of the purple color to mix into my off white shade by not cleaning the brush at all.  That's an old hat sort of thing for me, which harkens back to my days as an watercolor/oil/pastel painter. :-)
I gladly let my 'dirty' brush influence subsequent colors, because it means that I am getting my 'color unity' by default.  I don't have to think about what I need to mix into a given shade to keep it in harmony with the surrounding colors... it's already in the brush!!

You can check out some of the other Raging Heroes dark elf and Drow galleries to see just how different this lady was.

I will try to do some side by side shots for you soon.  The 40k Dark Eldar Asharah is still here, so I will snap those images before this one is sent on her way.
Those will also illustrate how versatile these kits are, as they come with all kinds of weapon and head options.  It will allow you to create just about any character you want.
The left over pieces are very handy.  In fact, I just used a bow from one of the Raging Heroes kits on the Elf Owl rider.

Posted by wappellious at 6:18 PM 4 comments: 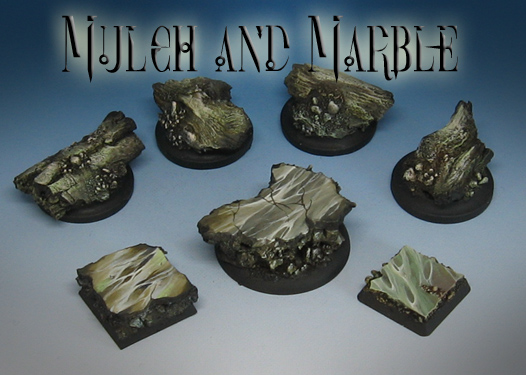 As I often do, I will make many bases at once, instead of just one at a time for a particular project at hand.
Also, I wanted to experiment a little more with some newer materials that are part of the Bark and Branch variety of bases.  I tried out a piece or two of mulch a few months ago, since pieces of that stuff kept getting stuck in my lawn mower.
After kicking it out of the push mower blades, I noticed that it looked an awful lot like rocks!!
As you can see, with a bit of paint, and some additional gravel and ballast... voila!! 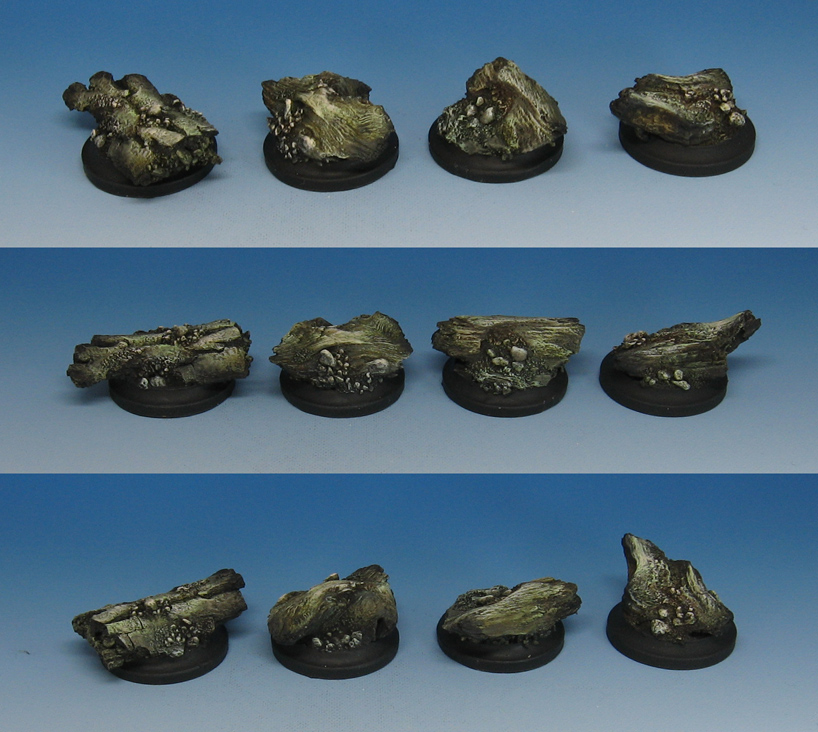 The piece in the front of the image was actually a different kind of tree bark that I found in a different part of the route that I usually walk to the grocery store.
It is more difficult to work with than the normal bark that you see me use, as it is very hard, and not 'flaky' like the other bark material. 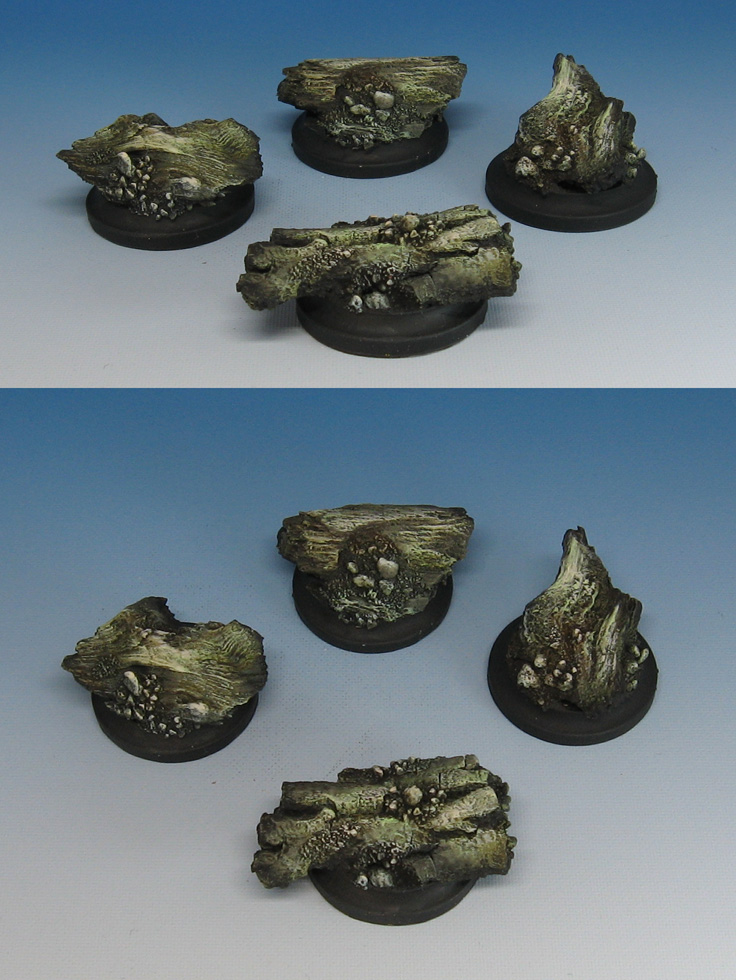 While I was painting them, I realized that I could use all the same colors on some marble bases that had been waiting for paint for a long time.  I think two of them were bases that I created as part of one of the kickstarter videos!

The main color was Reaper Stained Olive, and into that was mixed some seafoam green, and even a light elf flesh. Working with the larger #8 round craft brushes, I was able to work very quickly, and take advantage of wet into wet painting.  I even used my finger a number of times to smear around the initial layers of paint.
The white 'regular' sculpey is the perfect surface, absorbent enough to hold the paint easily but smooth enough to allow you to apply the paint very easily. 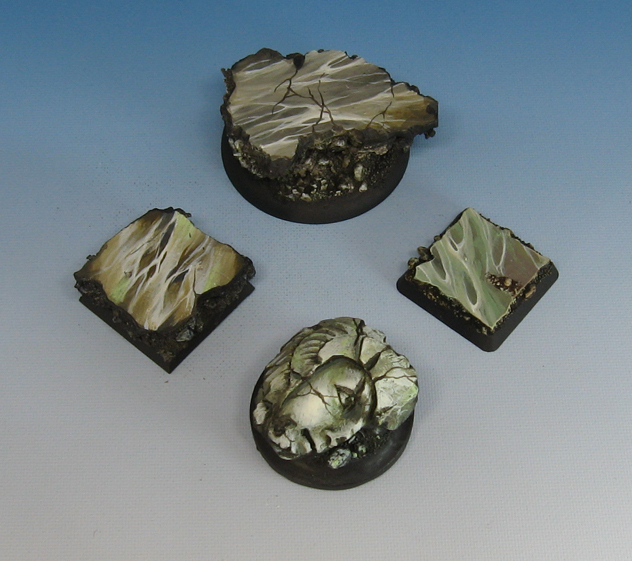 Showing the collection together in this shot demonstrates just how close the colors were!
Of course, there are some color variations and accents that aren't readily visible in these images, but in some places, I did a bit of a red/deep green glaze using the Reaper liner paints.
In addition, I used a few of the Vallejo glazes.  These are the semi-opaque versions, which are fantastic to add in the occasional deep crevice. 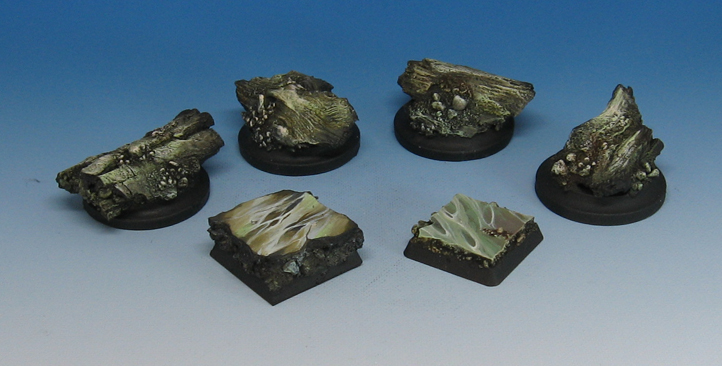 I will be adding various grass tufts to the 'rock' bases, but that will happen once I have set the figures on them.
In the meantime, I have a bunch of bases available for just about any kind of figure you can think of!
Stay tuned for the next post, because I use one of them on a new Raging Heroes figure. 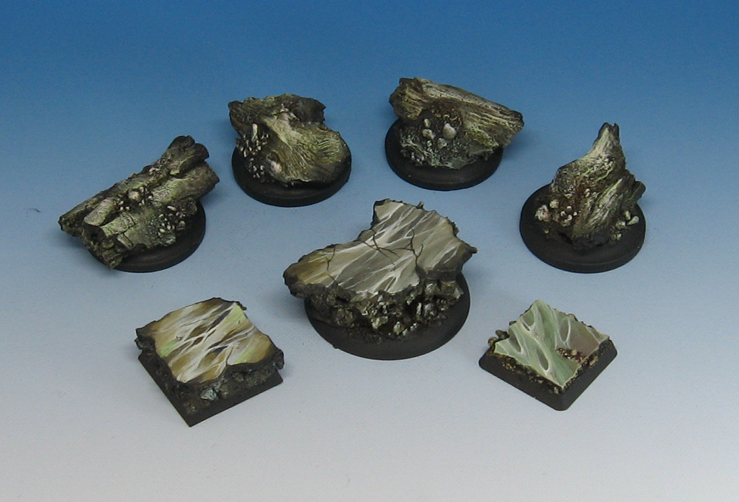 Posted by wappellious at 2:16 AM 4 comments: