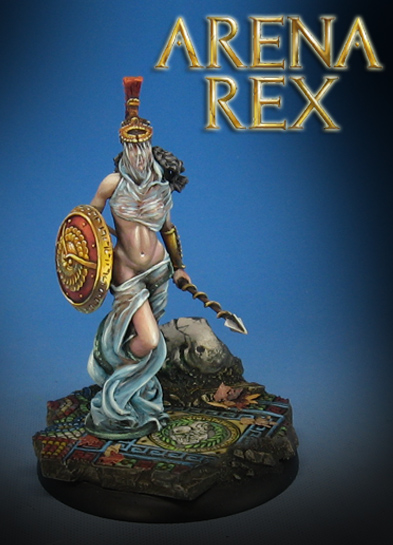 This Medusa figure from Arena Rex was the first that I have painted from this wonderful line of figures.  She is mounted on a 50mm base, which was created using the Green Stuff World texture rollers.

The transparent cloth effect is always interesting to achieve.  While there are a few basic principles involved in translating the effect, it can be more difficult depending how the figure is sculpted.

If the cloth has a lot of heavy folds, that can make it more difficult to paint the lighter skin colored areas in the 'gaps' where they would show up.  The high points of the folds get the brightest 'cloth' color.  The trickiest part is that darkened zone in the middle, which helps to show those two areas of lighter tones.  One must have dark to show light!

The shield presented a nice opportunity to do some gold NMM.  That was done in my normal way,  including the use of the Vallejo fluorescent yellow to infuse into the burnt sienna and even purples.

Here are a few better images of that mosaic tile base.  Again, the texture was made by rolling a Green Stuff World texture roller into the unbaked Sculpey clay.  This was  broken into shape once it was baked, and placed on a piece of cork.  Sand and gravel were added around the sides to finish off the texture.

One more set of views, which also show the veiled face a little better.

As a final note, this was entered into the Arena Rex painting contest, winning second prize!  Many thanks to the good folks who create so many fantastic miniatures :-)