We have a casualty... 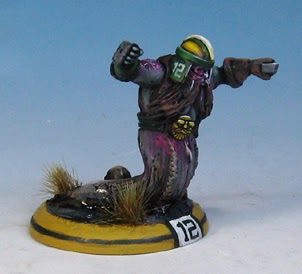 OK... here is the first of many rotters!  Since these are essentially dead players that have been given the 'gift' of life by Nurgle, there are many races.  There are orcs, humans, dwarves, and so on.

They all have these slug like bodies, which is why I went with the swampy bases.

Posted by wappellious at 3:11 PM No comments:

The battle for something continues... 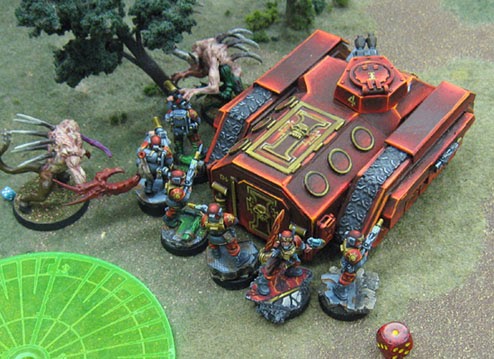 OK, time for the rest of the images.  As I mentioned in the previous post, this was a battle from years ago between traitor and loyalist Guard, along with Demonhunter and Chaos space marines.

I don't remember any specifics, but it did showcase the scratch built Chimeras, Dreadnoughts and Land Raider.

This command bunker seems to be the focal point of the battle.  You can see Rich's Traitor Guard backing up the Chaos space marines here. 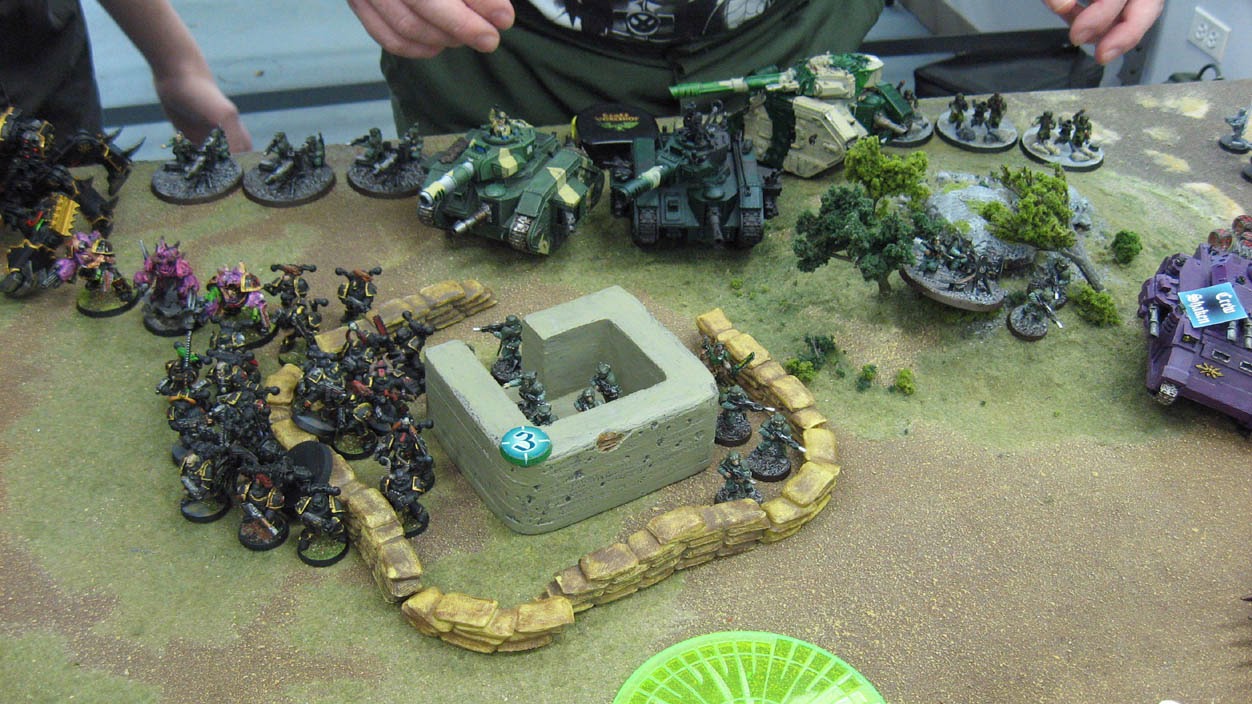 The Chimeras were filled with small squads of stormtroopers, each equipped with special weapons.  They were really more of a distraction, trying to draw off as much of the Chaos stuff as possible.

The main thrust appeared to be at the command bunker. 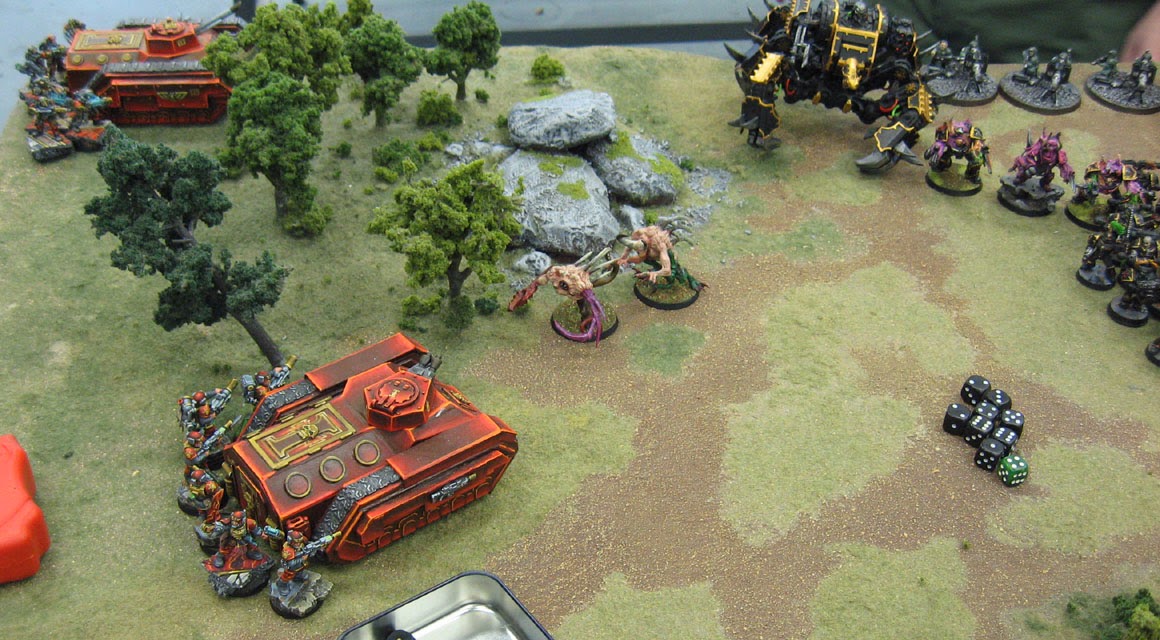 Uh oh, this doesn't look good for those Stormtroopers!  Looks like those Chaos spawn are gonna much a bunch of Guard.  Why not, I hear they stay crunchy in milk! 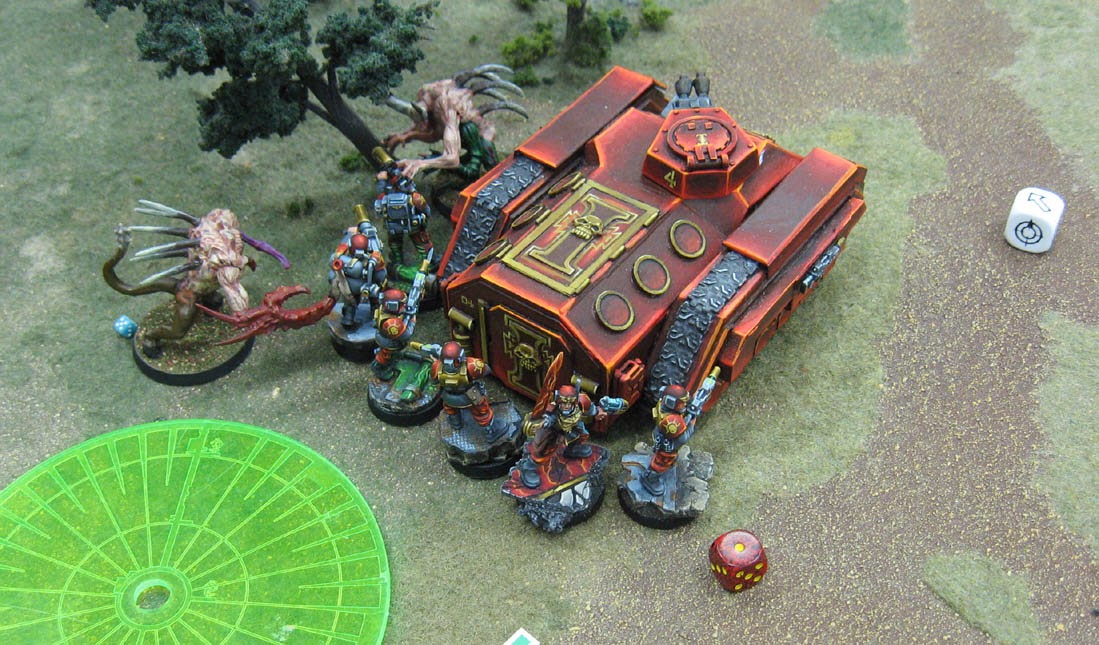 Judging by the look on Rich's face here, that diversion just might be working!  Notice the Land Raider, terminators and dreadnought marching towards that bunker... 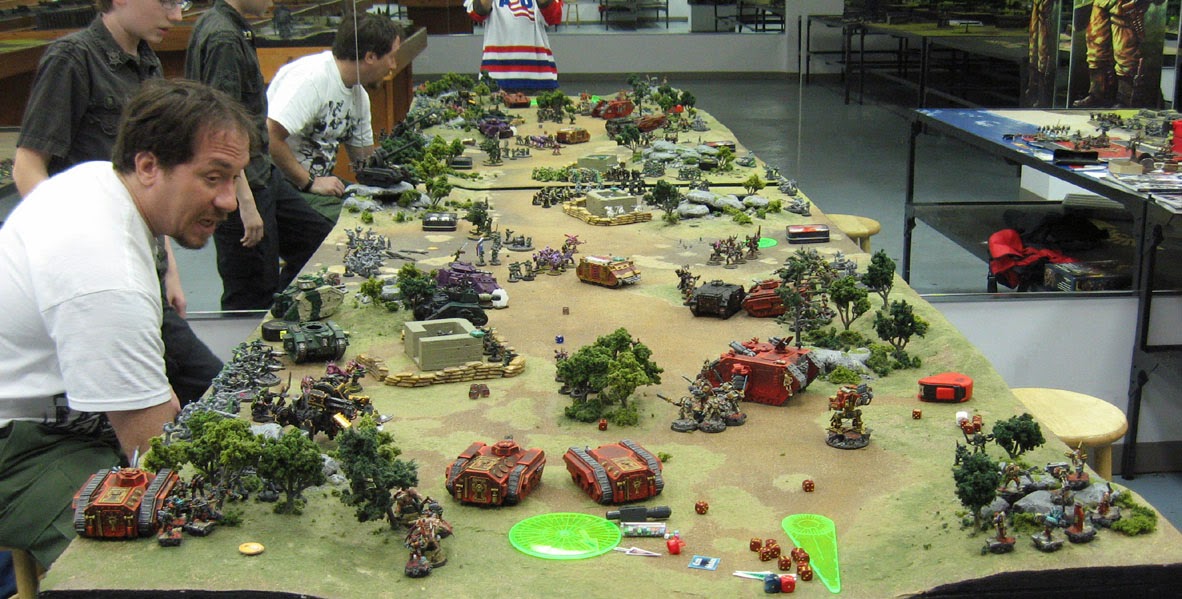 Rich is very happy about wiping away most of the Chimeras and Guardsmen.  No biggie, those countless billions are there to be sacrificed... or else they are using up a whole lot of space! 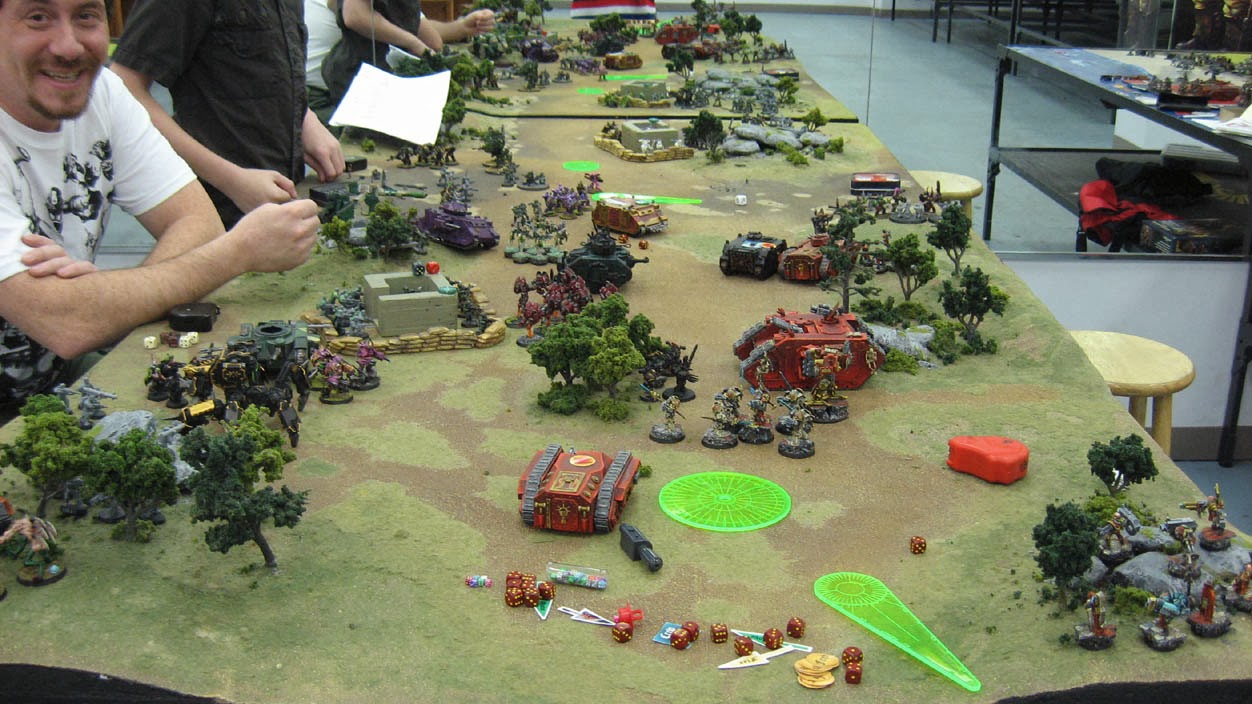 Look who dropped in!  Some Seraphim, toting some nasty mini meltas.  Say goodbye to the purple predator! 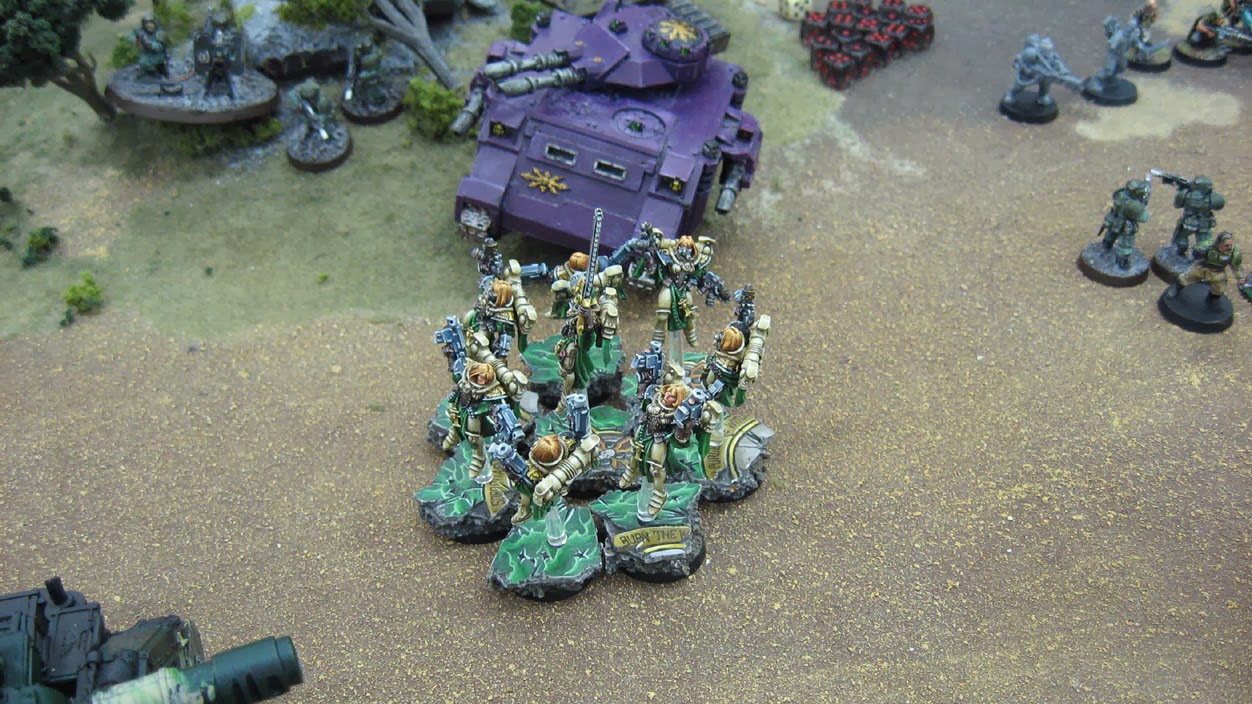 Backed by the firepower of the Traitor Guard, a sortie is made by the Chaos marines in some Rhinos.  I believe that A.J.'s Tanith are just about to show up behind Rich's lines.

As usual, all of A.J.s troops die gloriously in the attempt. 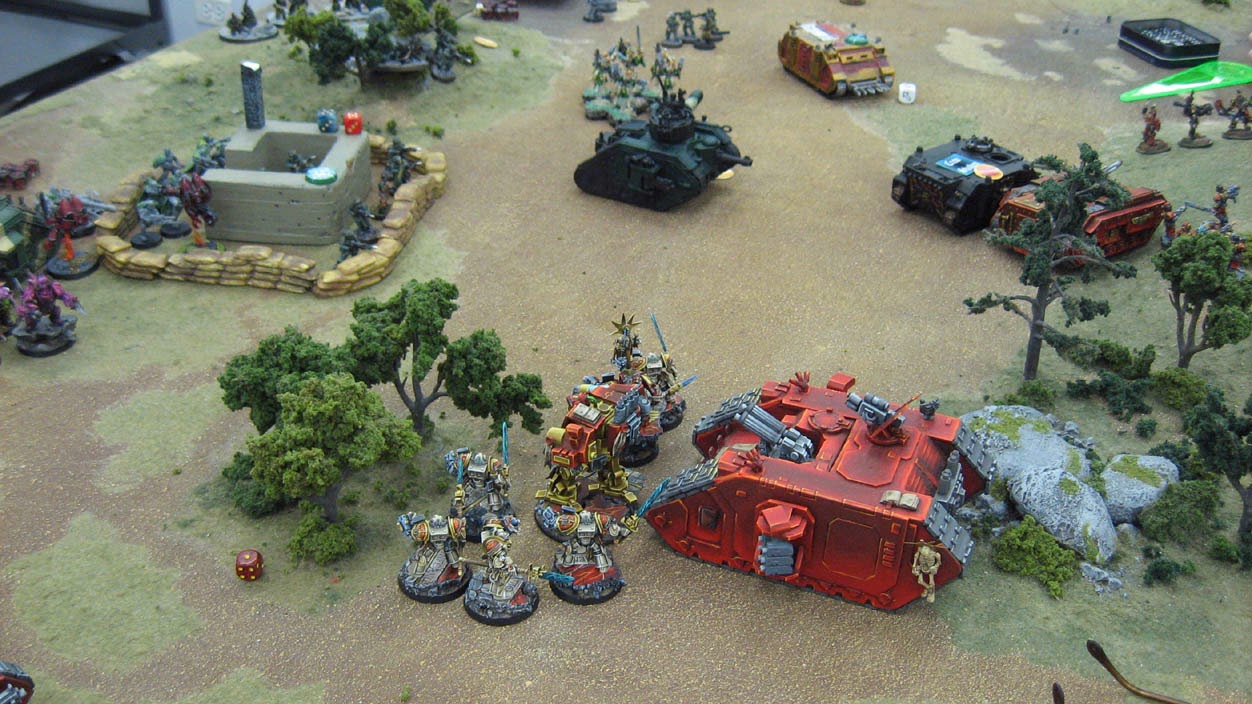 However, the sacrifice is not in vain, since ultimate victory is achieved!  A massive amount of blood is spilled, but the vile taint is removed from whatever this was! 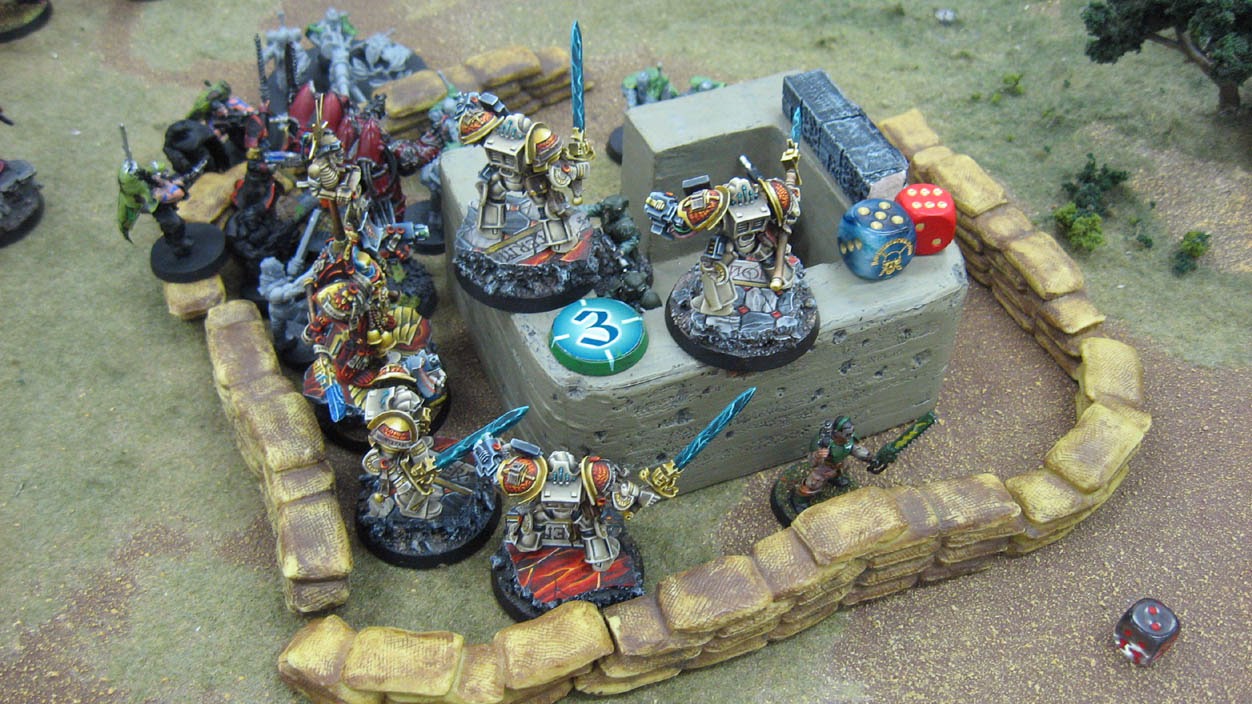