Wash the blues away: Finishing the Dragonforge bases 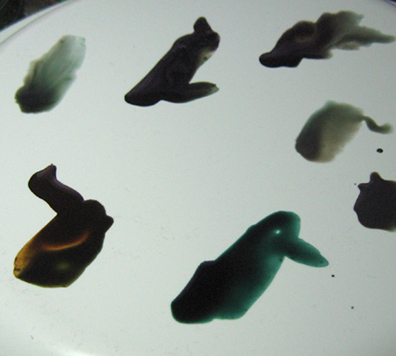 You know what time it is!  Yes, time for glazing!

Here is an image of the bases as they were set up for this stage.  As usual with the shaded basecoat, I have gone lighter than normal, so that I can do the rest by shading darker. 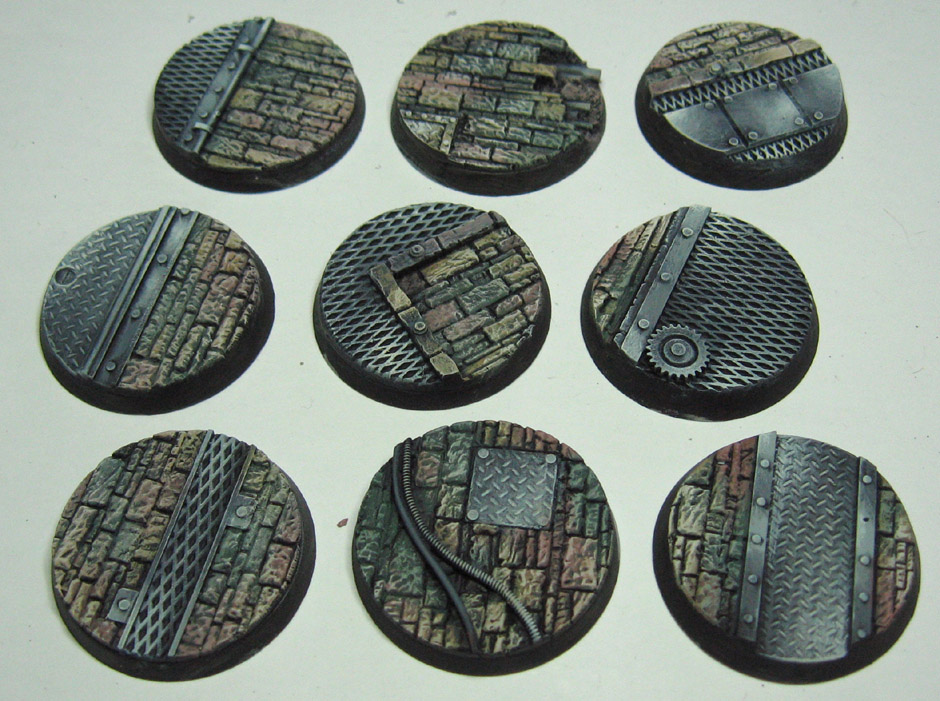 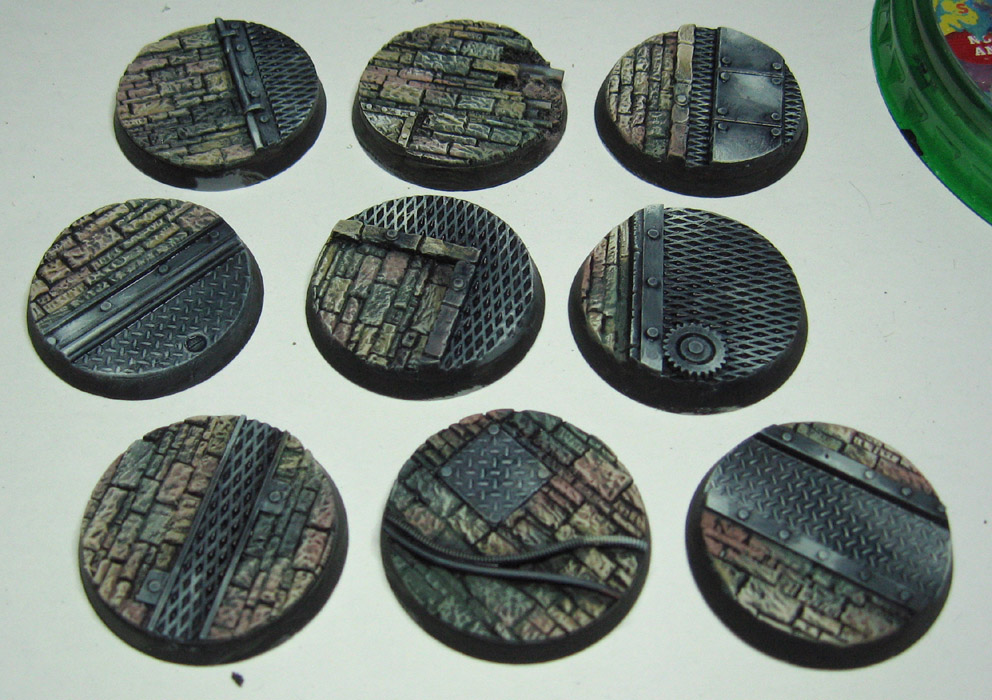 Now it is time for the stones.  I have a few colors out on the palette: a black, a green, a sepia, and a brown.  The idea is to alter my glaze colors in the same way as I did the original colors.

Here's a close up of the palette.  I also have a few batches of watered down glaze.  This is very helpful for doing those initial layers of lighter glaze.  Again, it is very important to think of this as more of a watercolor technique.  Shade lighter at first, since you can always go darker!  All it will take is a few more layers.

It is much faster to apply these transparent colors, as opposed to the same number of opaque layers. 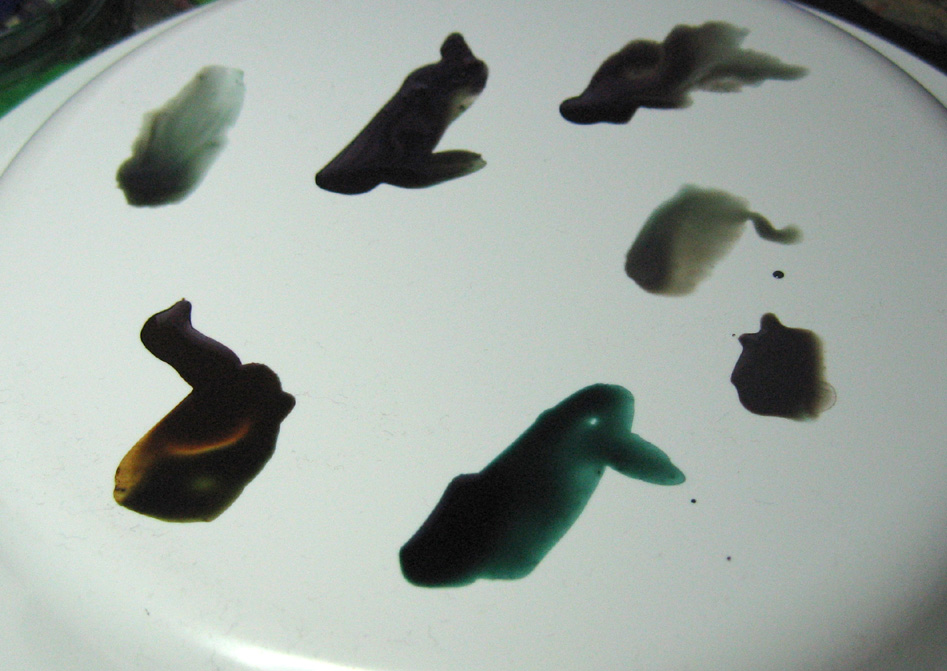 Here is another trick I like to use on rough surfaces such as this.  See the paper towel on the left?  Yes, dabbing away the extra glaze works very well for creating interesting textures. 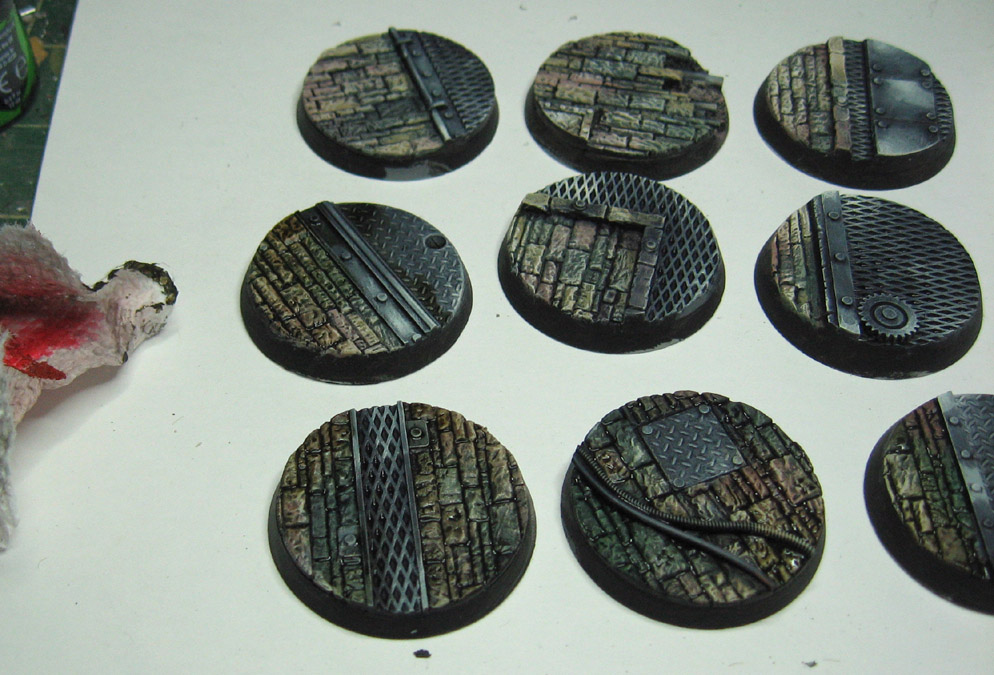 Here is an image that shows the completed glazes. 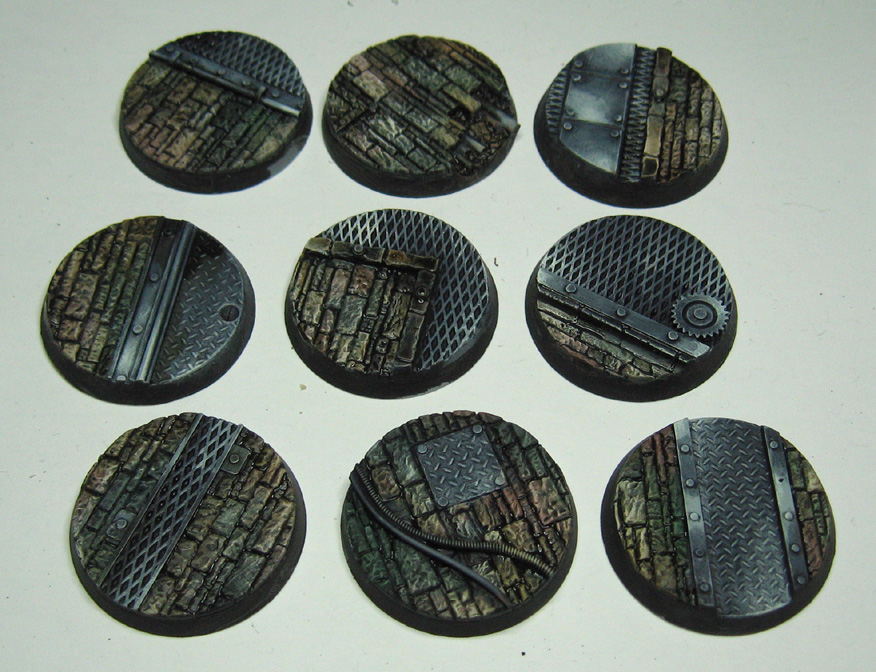 Now it is time to get some rust action on the metal sections.  On the left part of the image, I set down a blob of Calthan brown.  The foundation paints have an interesting quality when you water them down.  It tends to break down the paint, instead of thinning it.  This is very useful when you want to create some random looking washes. 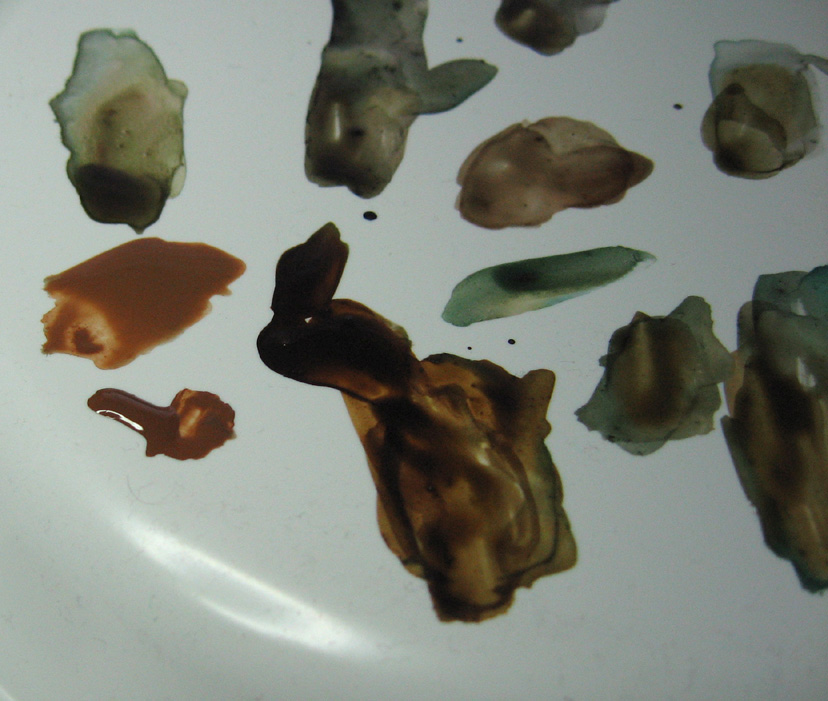 In this image, you can see that I have applied the first layer of "rust glaze".  I focused on the crevices, as that is where the rust would occur most frequently. 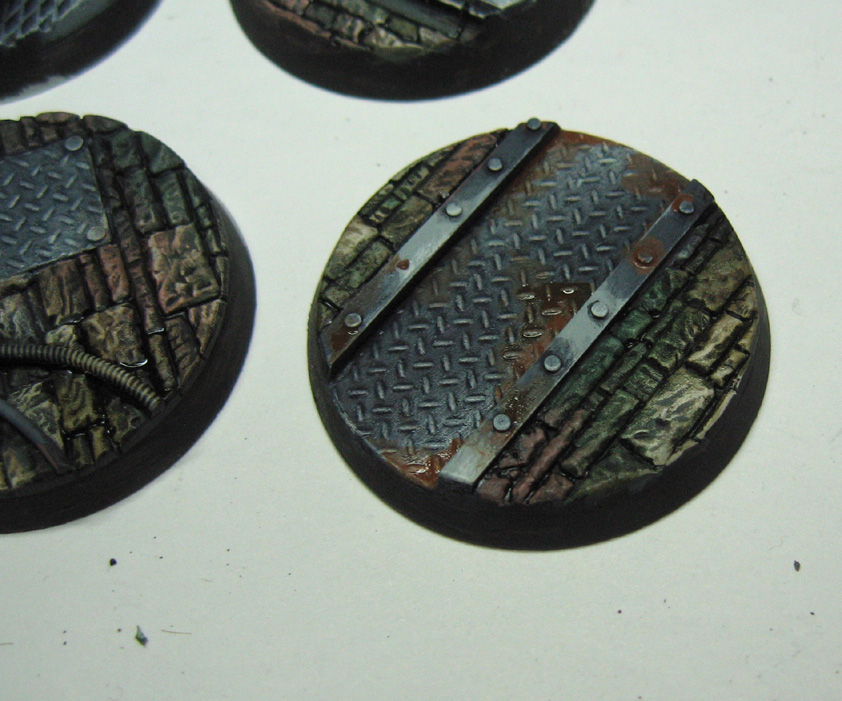 I did the same for all of the bases. 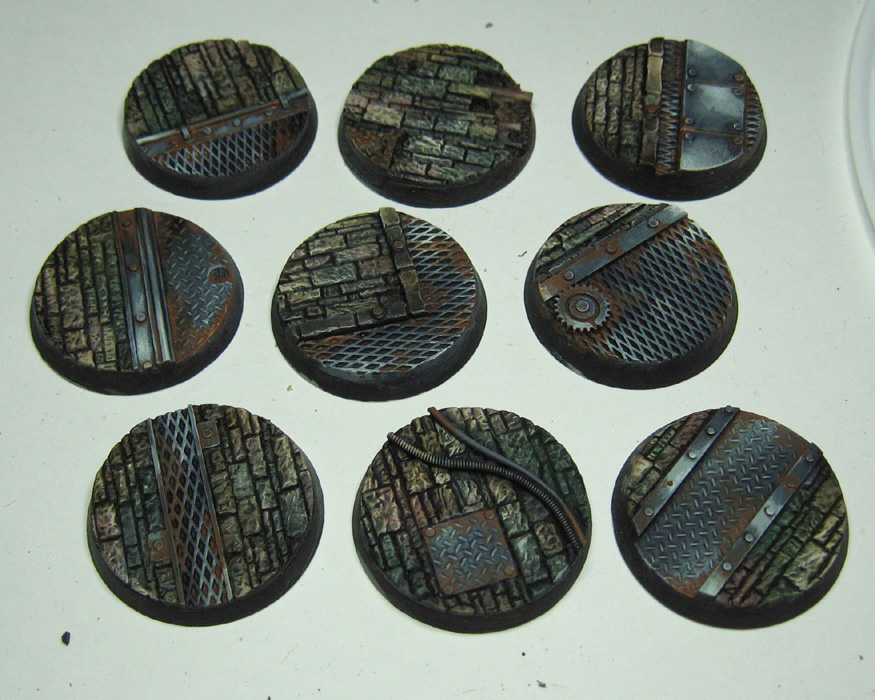 I added some lighter layers of this rust by adding some orange to the Calthan Brown.  It was watered down again, so that it would sink into the recesses. 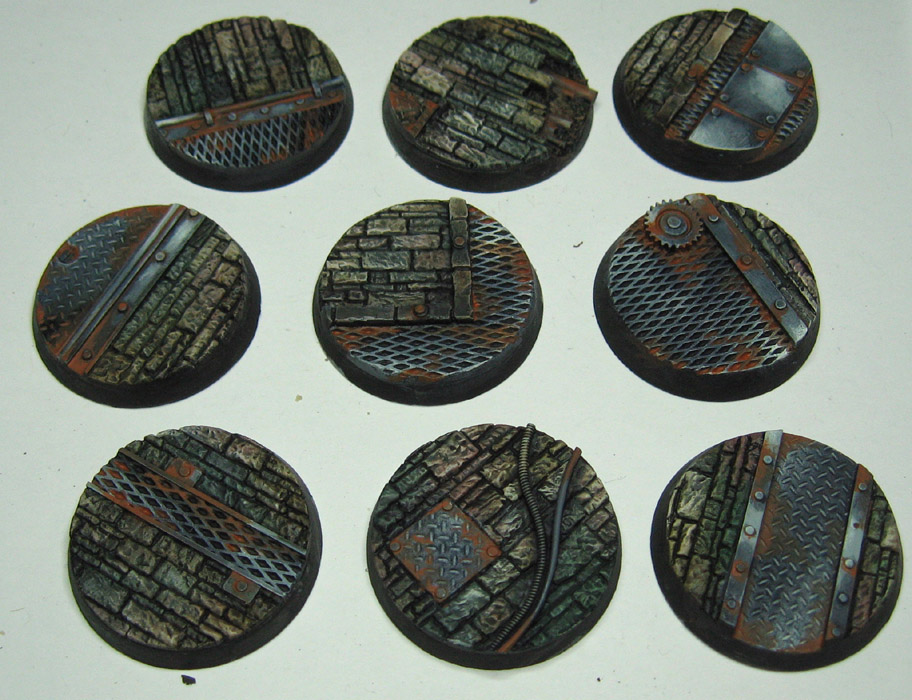 Here is where I left it off.  There are some more details I will add on once the miniatures are added.

I hope this little 'how to' was useful!! 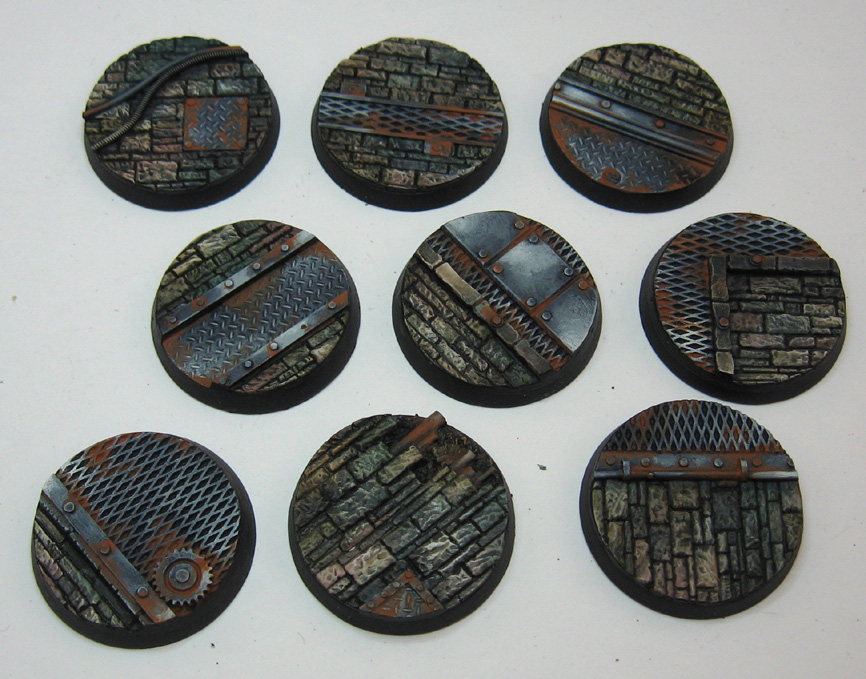 Posted by wappellious at 6:35 PM 6 comments:

Using the shaded basecoat to paint your sci fi bases 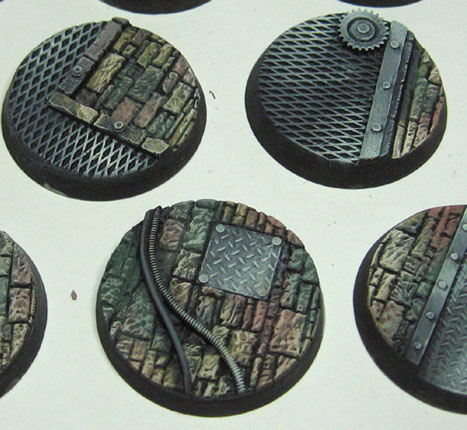 You saw me use the shaded basecoat technique a few days ago to paint the Groundwerks Mayan theme bases, so I thought I would do the same for some sci-fi bases from Dragonforge!

Here is a set of 40mm Dragonforge... very neat!  First, I brushed on some black primer.

I began with a little Vallejo German grey.  This looks like drybrushing, but it is a bit more 'controlled' than that. 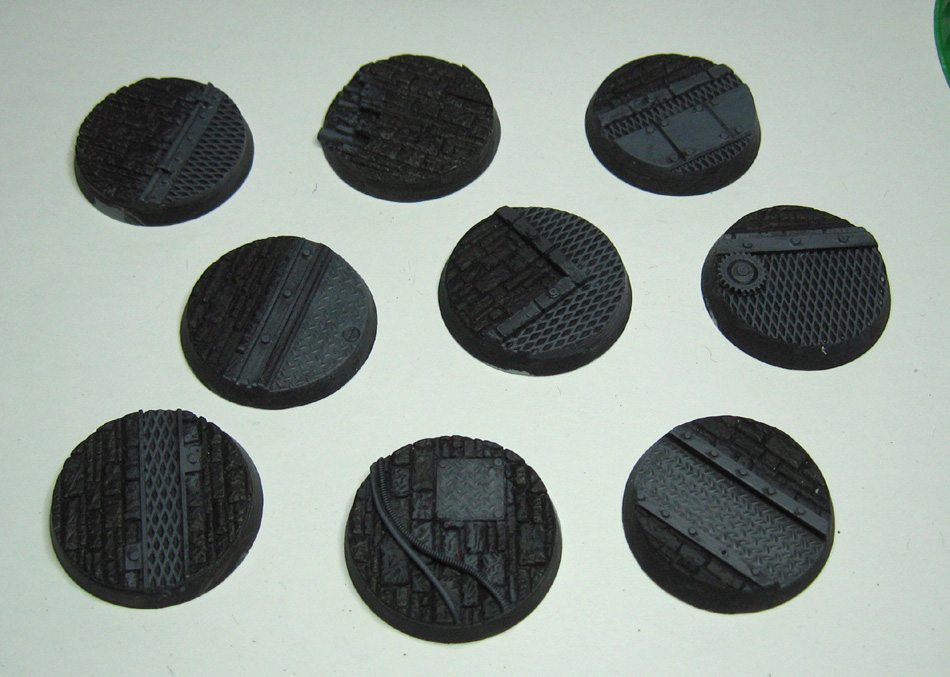 I added some Vallejo intermediate blue (a blue/grey), and continued to do the controlled drybrushing. 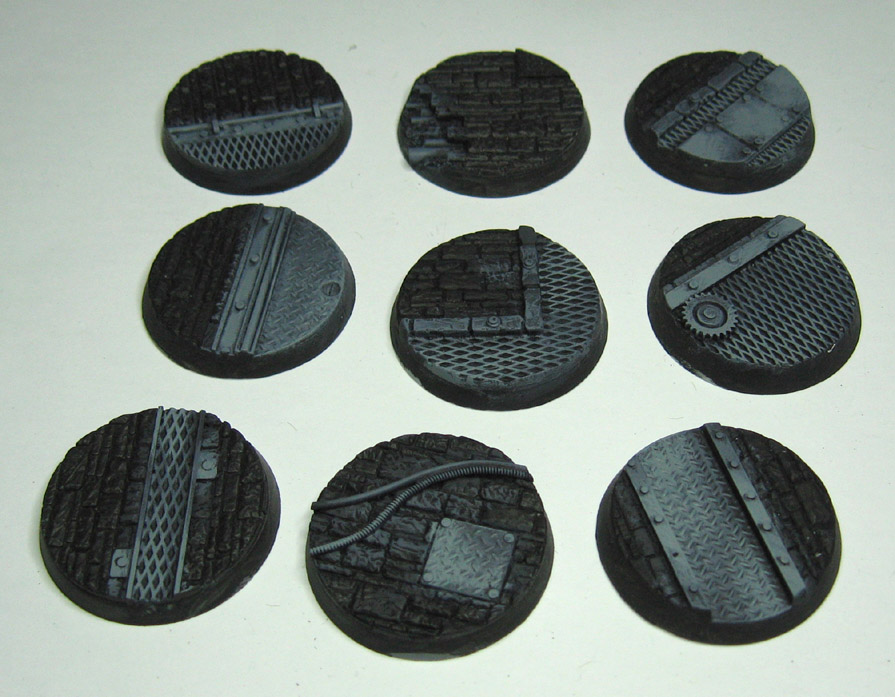 I continued to work up to the lightest blue/grey... 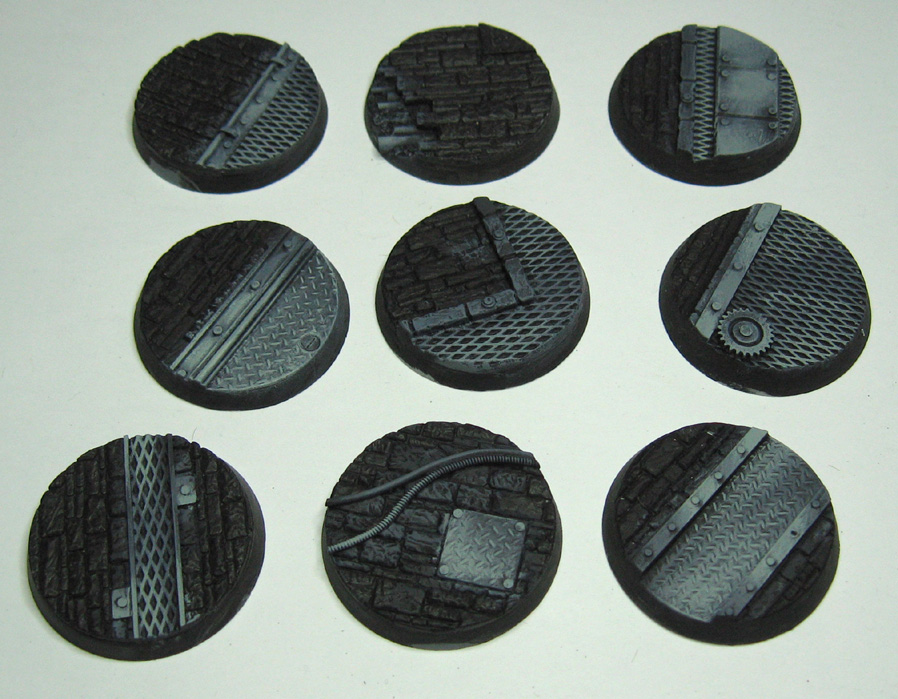 Then I added some Vallejo pale green, and continued.  The idea is to set up my darker glazes, which will be more blue/black. 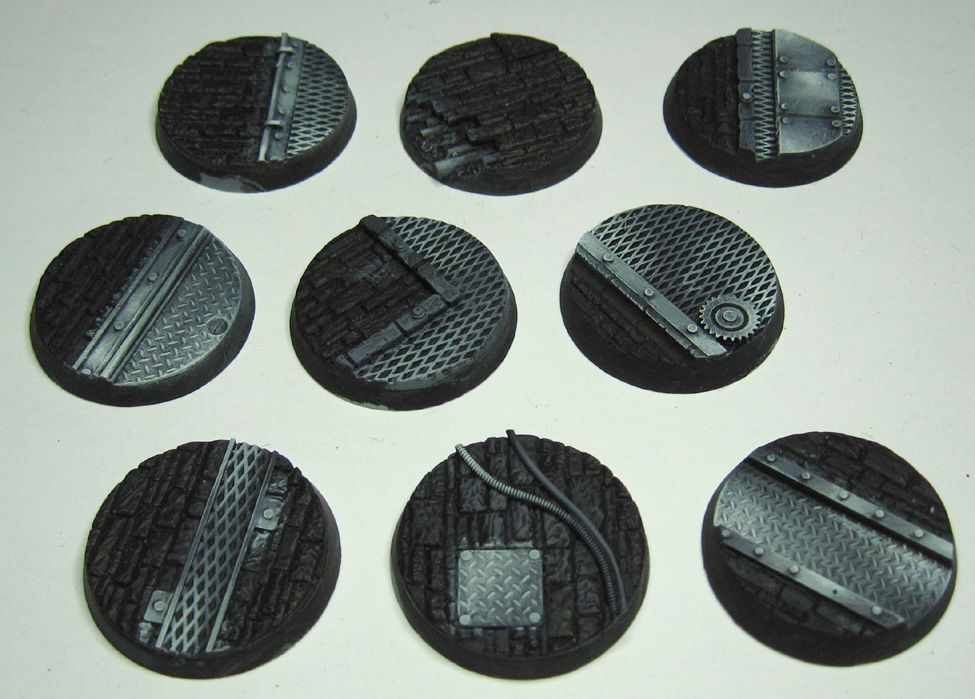 Then it was time for the non metal sections.  I started out with an olive green, mixed with some of the blue/grey. 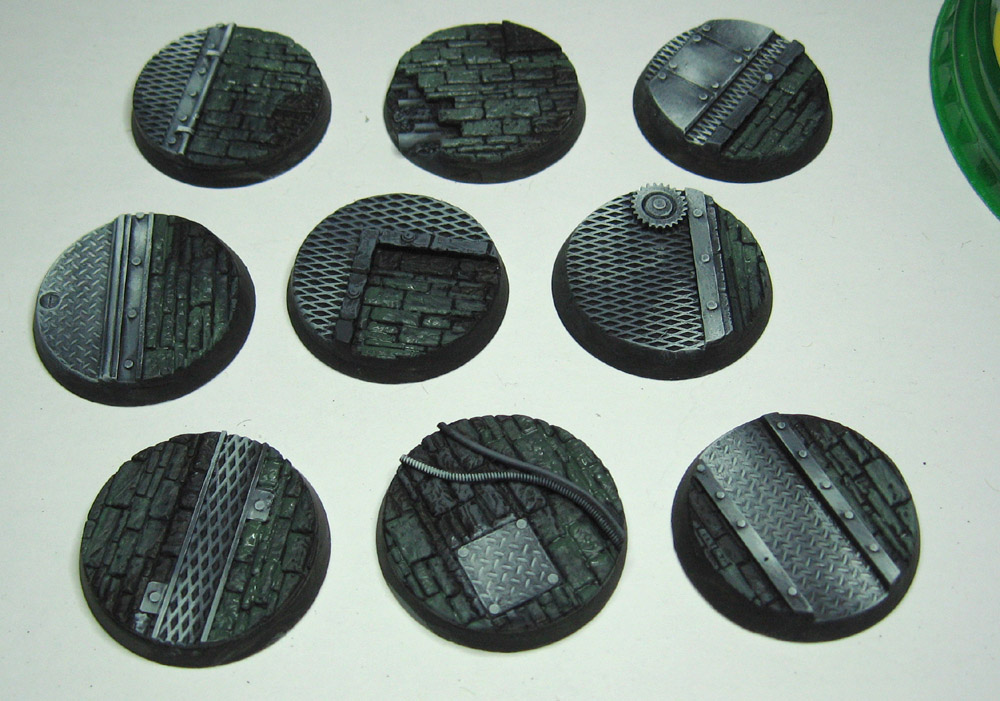 Then I used a terracotta color for some variety... 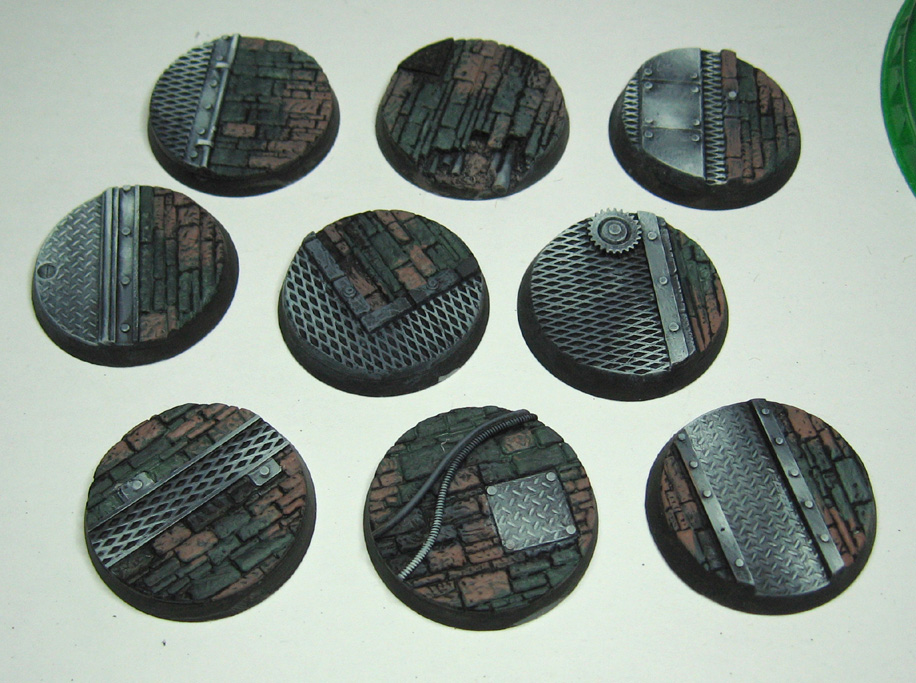 Finally, a tan was used to complete the initial colors of the stones. 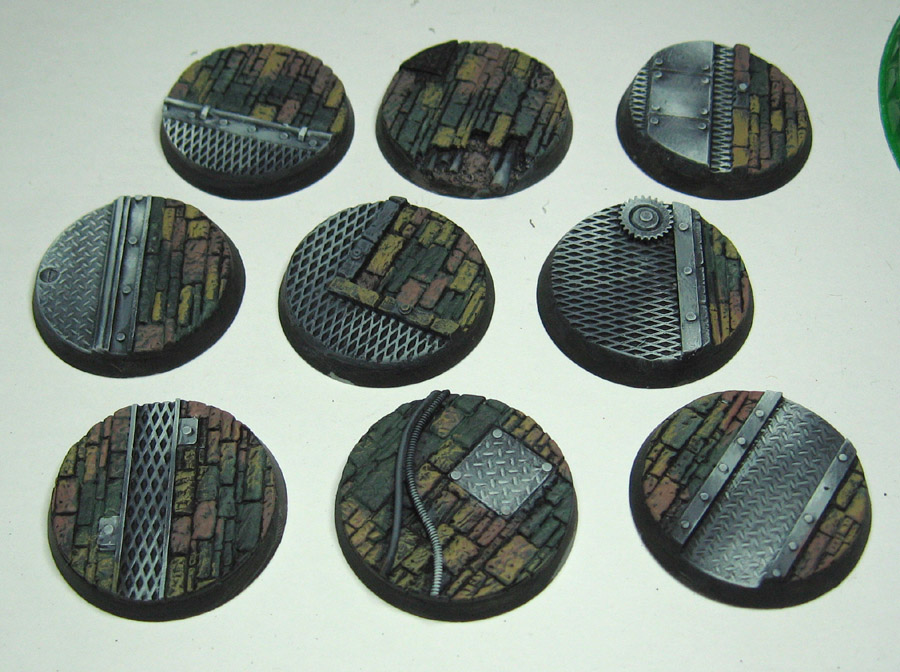 I mixed some pale flesh in with those 3 darker colors to lighten them.  Again, the whole idea is to set up the later glazes! 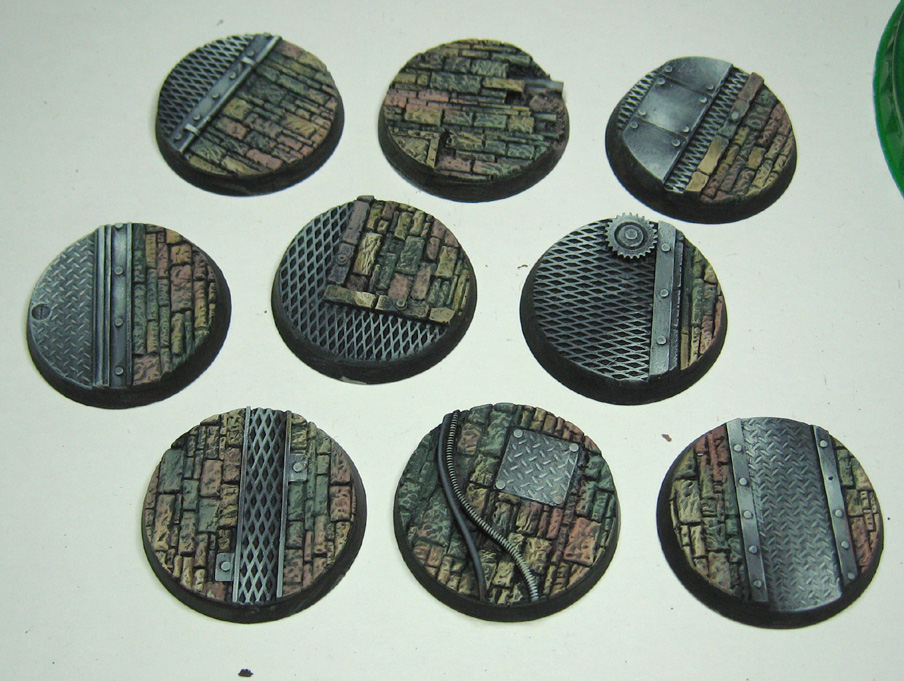 More lightening with the controlled drybrush... 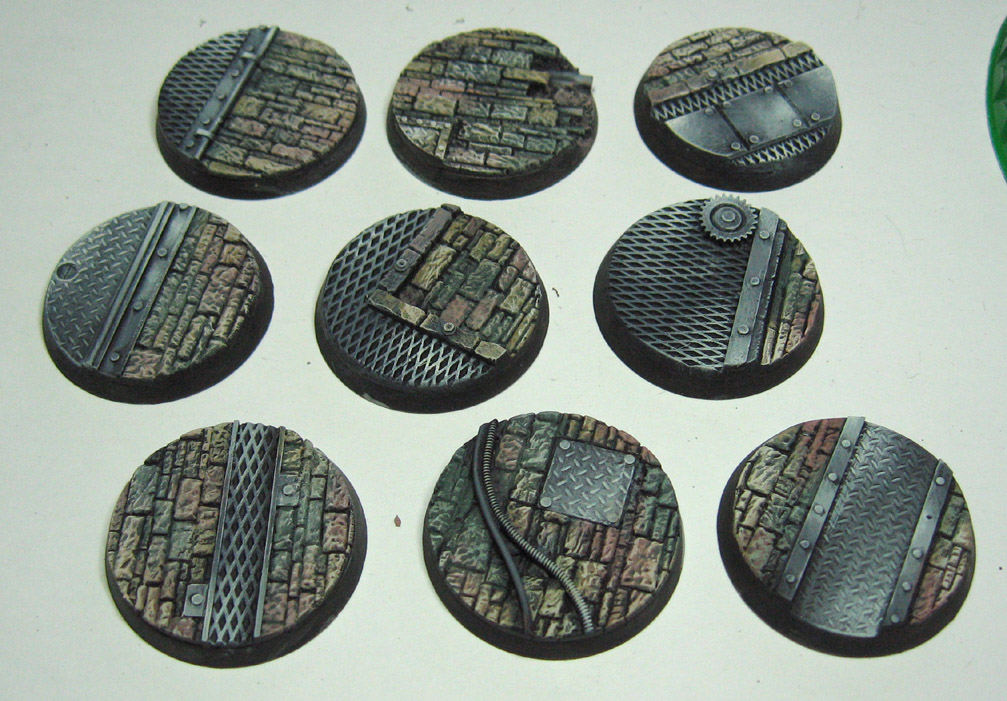 So, everything is set for those glazes!  Stay tuned for the next exciting episode!!!

Goram the Dead from Stonehaven Miniatures 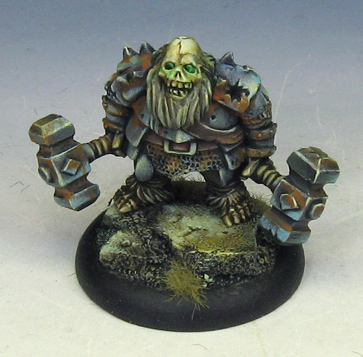 We have one more Dwarf from the Stonehaven kickstarter!

This is Goram the Dead.  In life, Goram had no desire to fight.  In death, he has more than one motivation.

First, he is bound to protect his master.  When his master is not around, he may get confused and choose a temporary master.  Second, he feels an insatiable hunger for carnage and gore.  Insatiable, but not irresistible!

Posted by wappellious at 2:17 AM 3 comments: