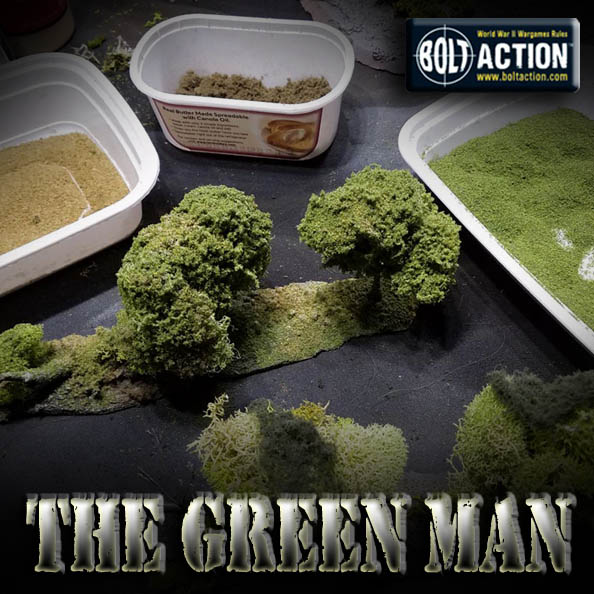 Once I had the large clumps of moss in place, and the glue had a chance to dry for a bit, I could continue with the rest of the process.  I mentioned that the tops of the hills were kept as clear as possible for other types of scatter terrain, in this case one of the smaller tree stands.

The clumps on the flanks of the hills were meant to provide potential cover for troops advancing up the hill, or vice versa. 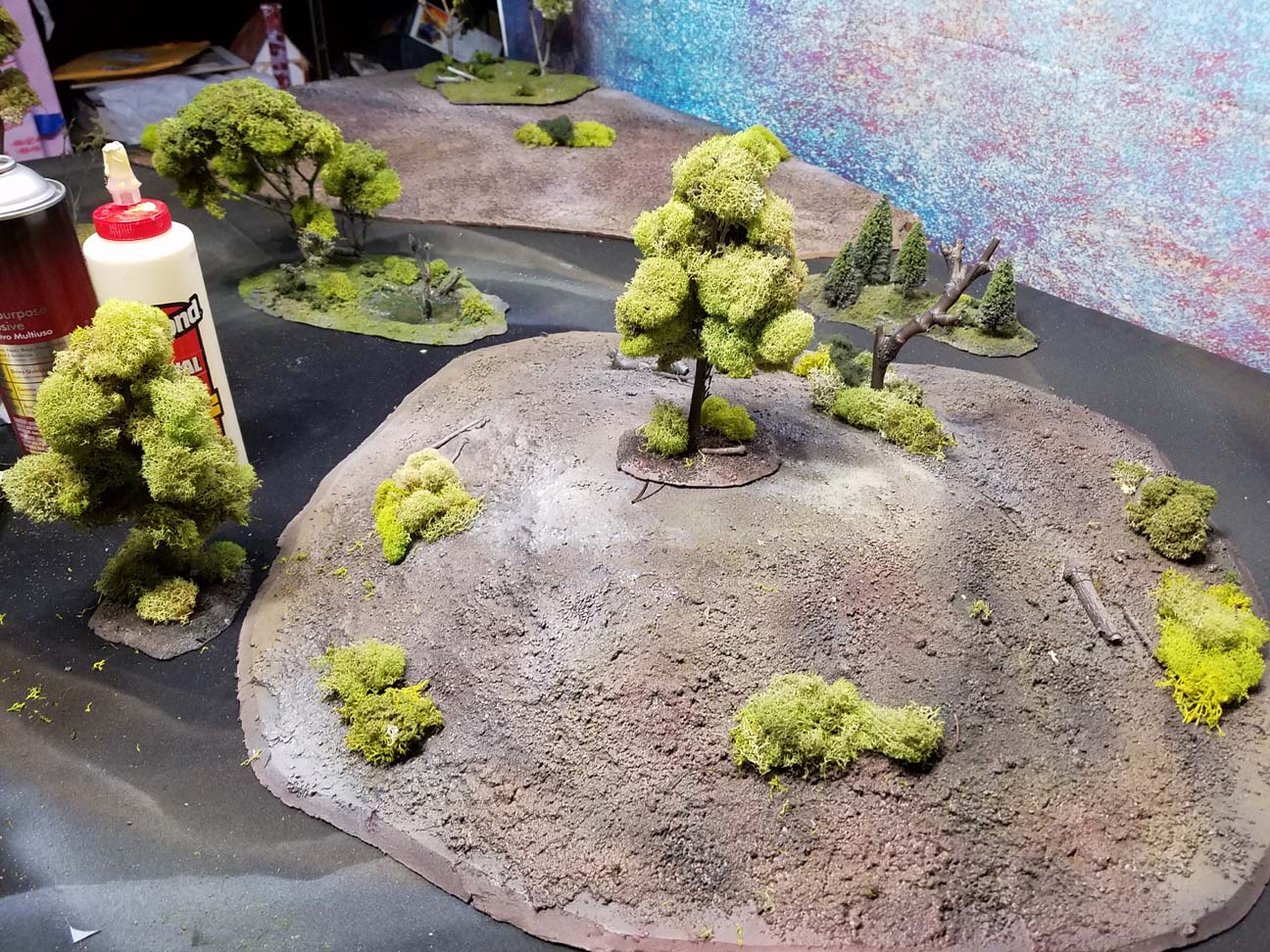 This wider angle shot illustrates how I did this on each section, sometimes with some fallen trees.  I will also make some additional pieces of terrain which will be angled to fit on the slopes too. 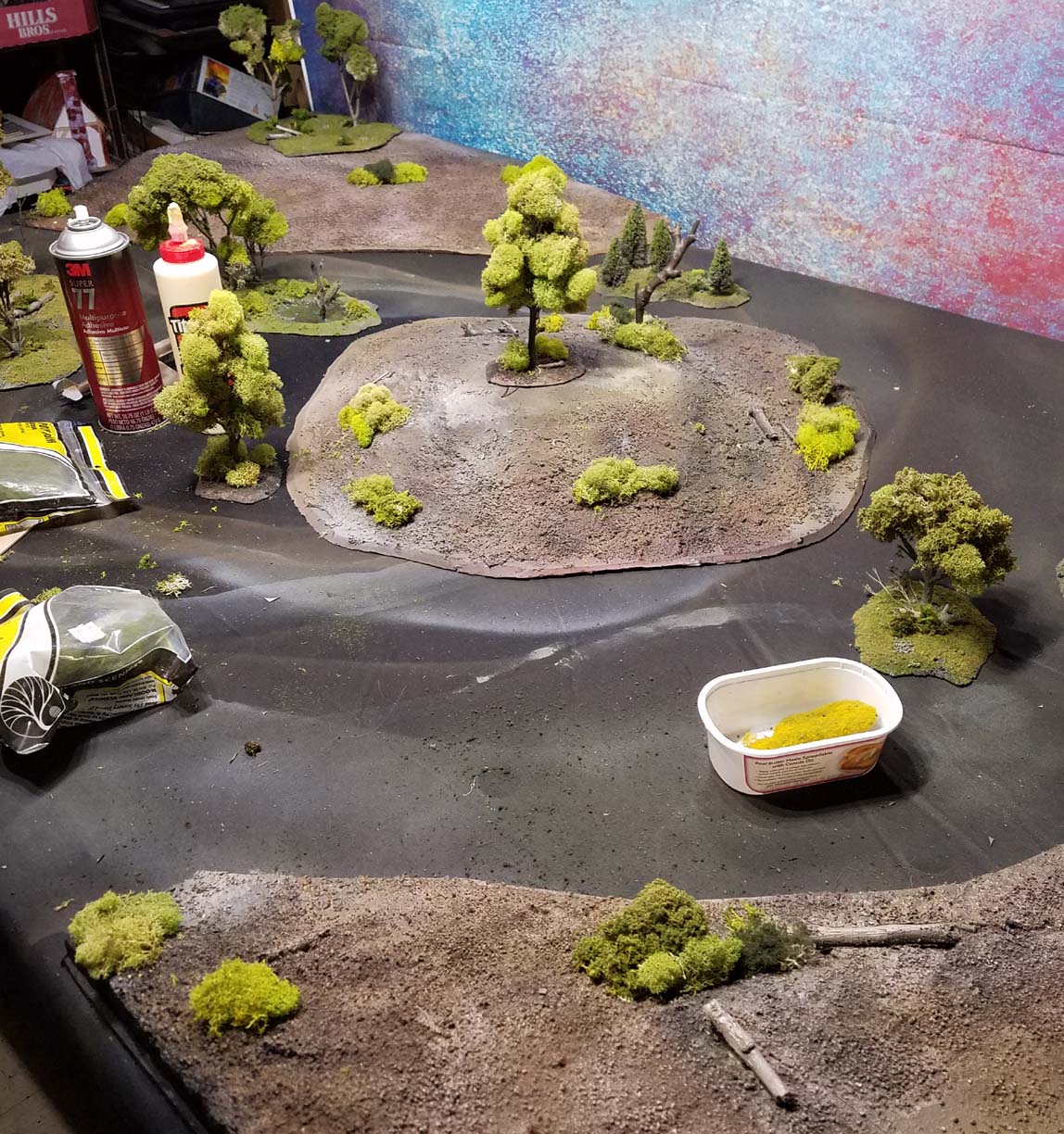 To ensure that the clumps would be large enough to cover a squad, I had a few figures on hand of each primary type of pose... kneeling, standing, etc., to make sure that they could actually see over the tops of the bushes, and that at least 10 could count as being in cover.

Since only the majority of figures must be in cover,  I think that ten could easily find a bit of refuge behind this clump, even from multiple angles. 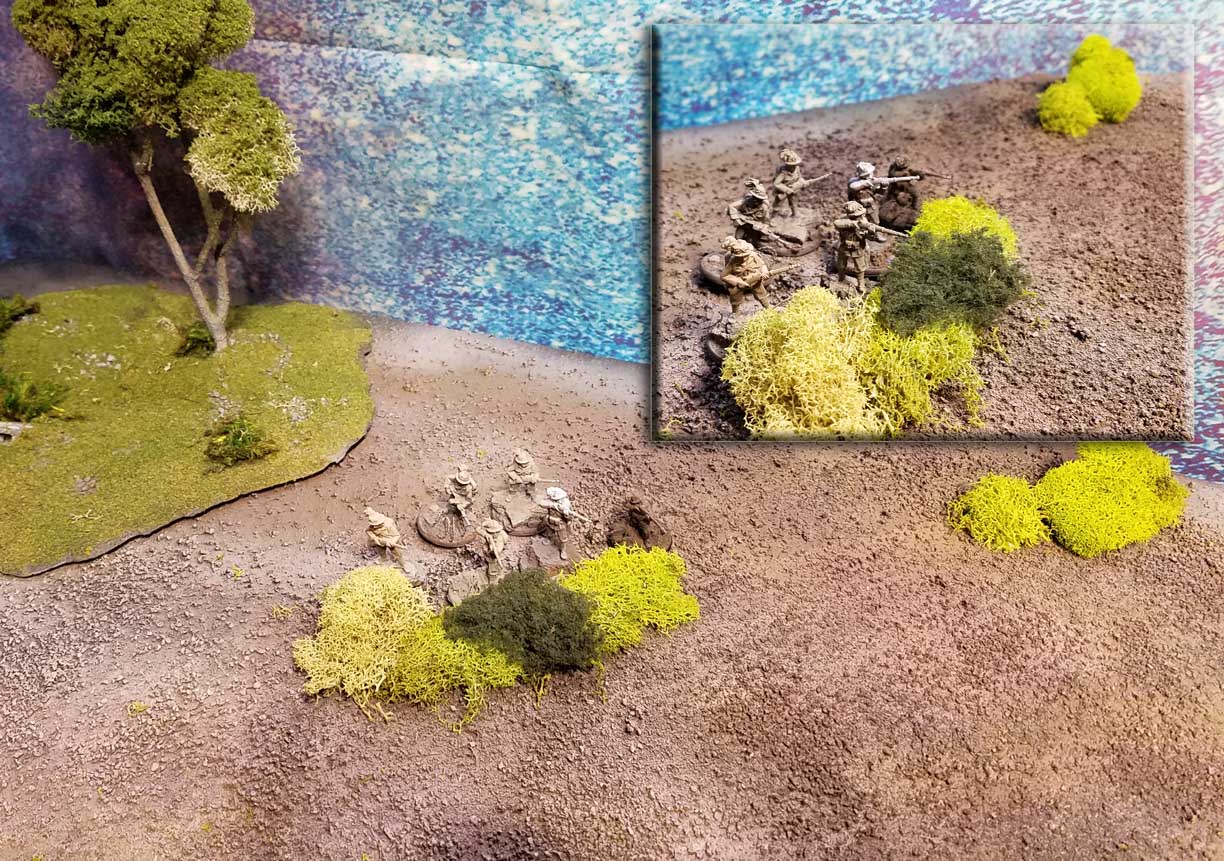 Hopefully this image gives a sense of how large these hills are.  Previously, the larger hill sections that I had constructed were simple "stair step" pieces, made from thick insulation foam.  While they looked OK, they were all the same kind of hard, cliff face, with no slope at all.

While that was OK for various fantasy and sci-fi games, I needed something more realistic for Bolt Action.  I ran across the same thing with the foliage for my basing techniques, which had to be changed once a "real" figure was standing on the base! 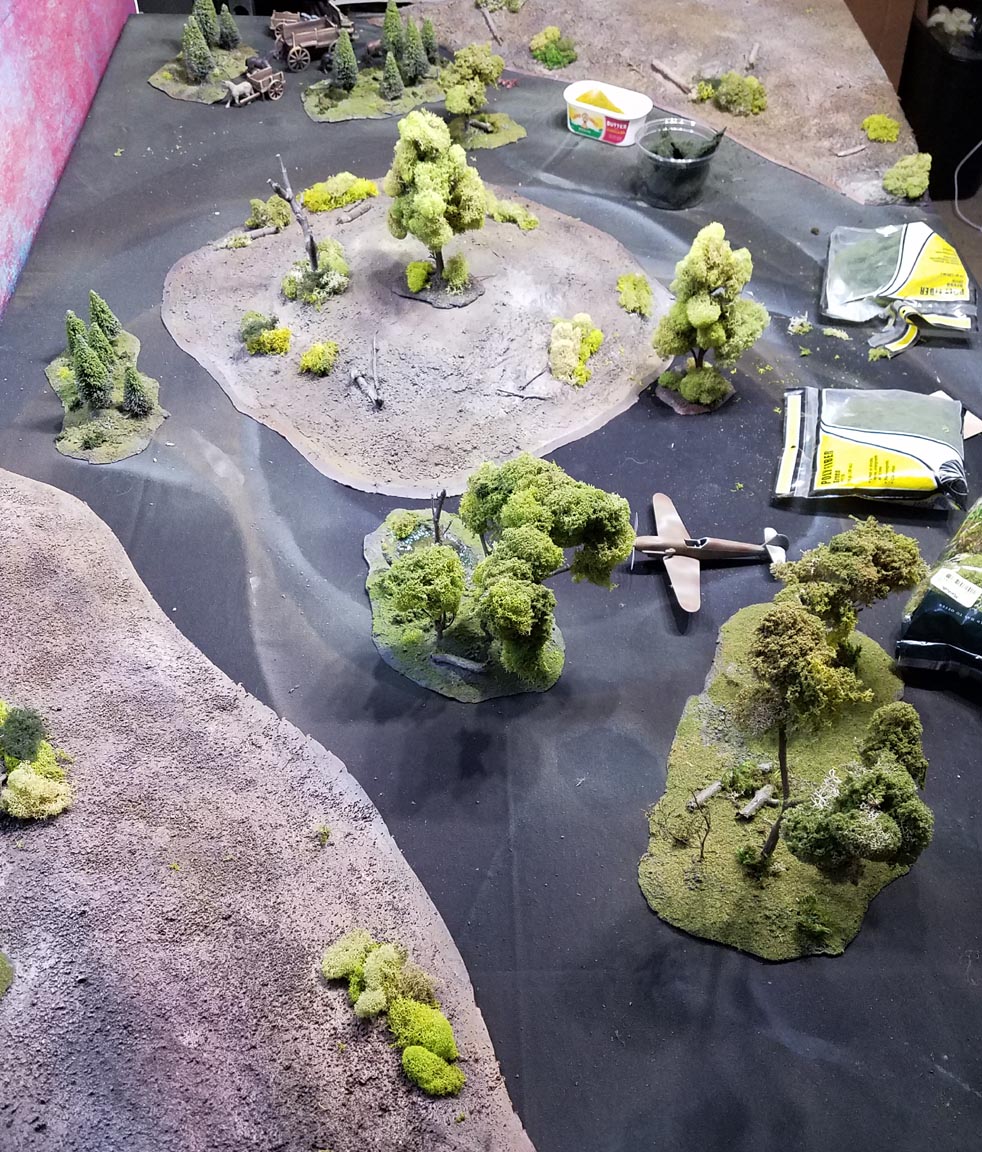 I also mentioned that the clumps of bushes was meant to provide obstacles and cover for infantry and even small transports.  Here's an example of a squad taking over on the side of the river. 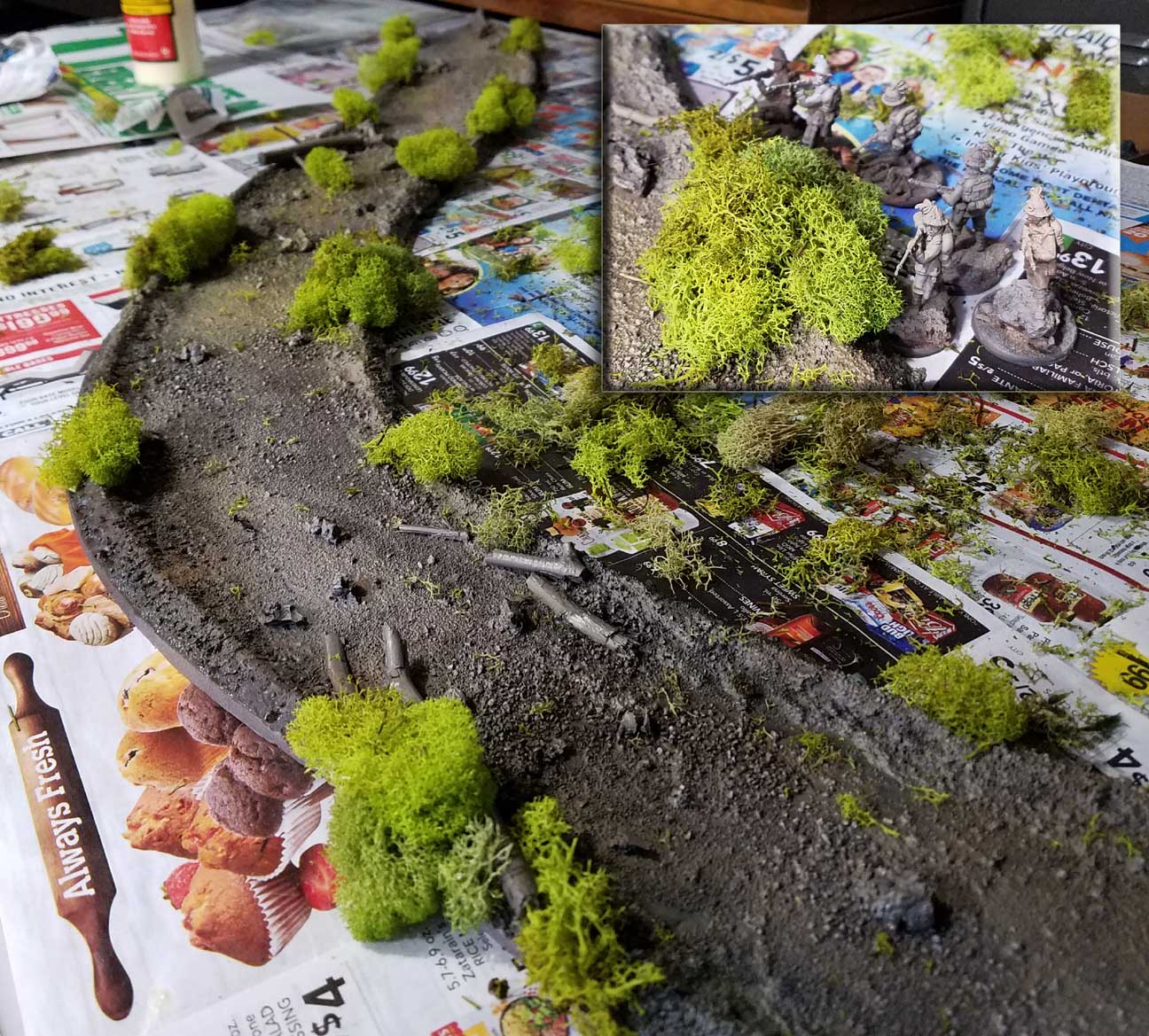 This is an image that I have seen so many times as I looked at the banks of most rivers... trees and bushes practically in the river itself.  Also, they would help to hide the edges that had to be created to allow for water effects.

While I loved the "dug in" river of the Barbarossa board, it is set in place forever, and each game will have to revolve around it.  I needed something that could be removed if necessary, and work with the new mats from TableWar! 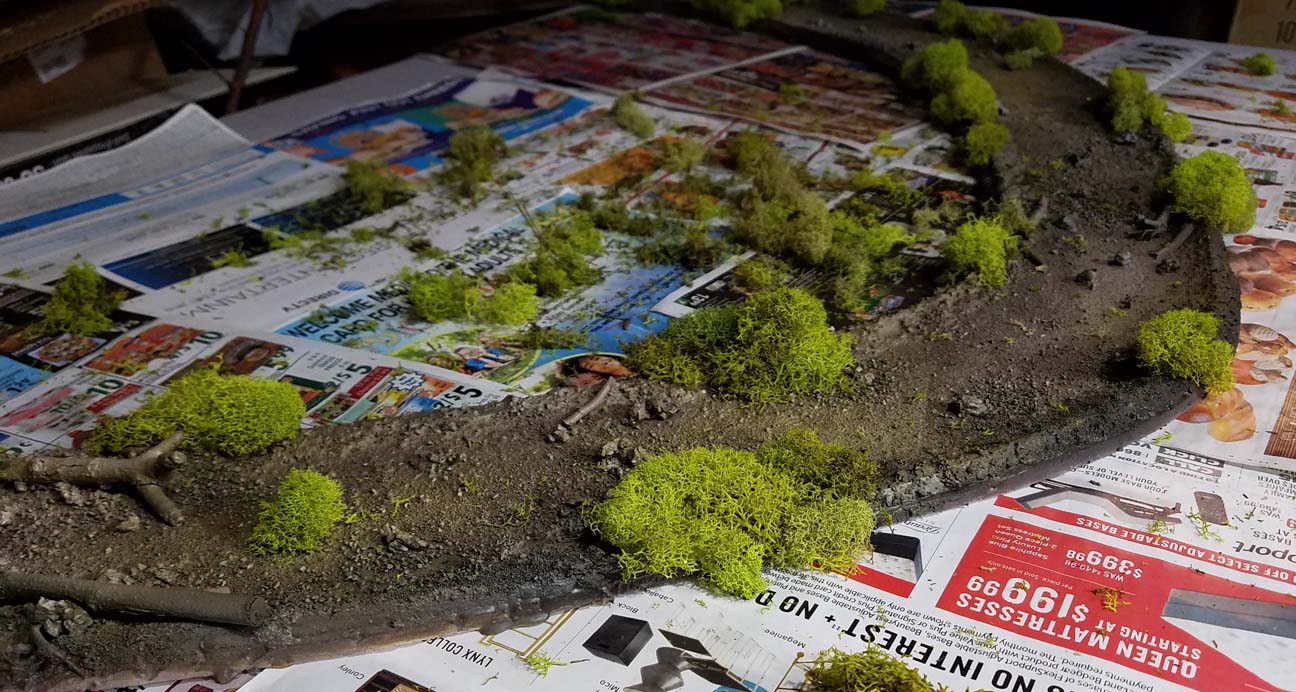 Here's the array of new products, all from Woodland Scenics.  There is not only a difference in color, but also texture.  There's a heavier, thicker type in a rich green and a brown, super fine in tan and very dark brown, and medium flock in a variety of greens. 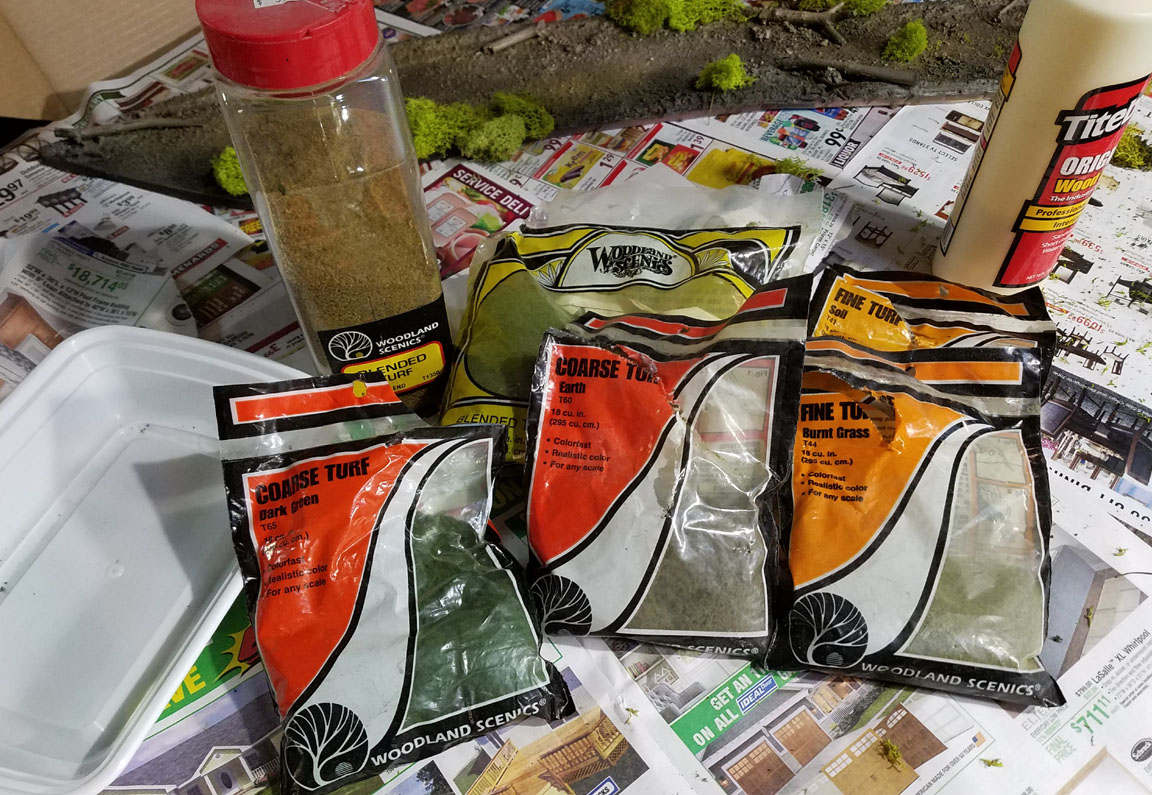 Here's an example of what they look like right out of the package.  It is handy to have containers like this when you want to apply the flock.  You can gold the piece right over the container, which means you will save on a bit of mess and catch more of the excess too! 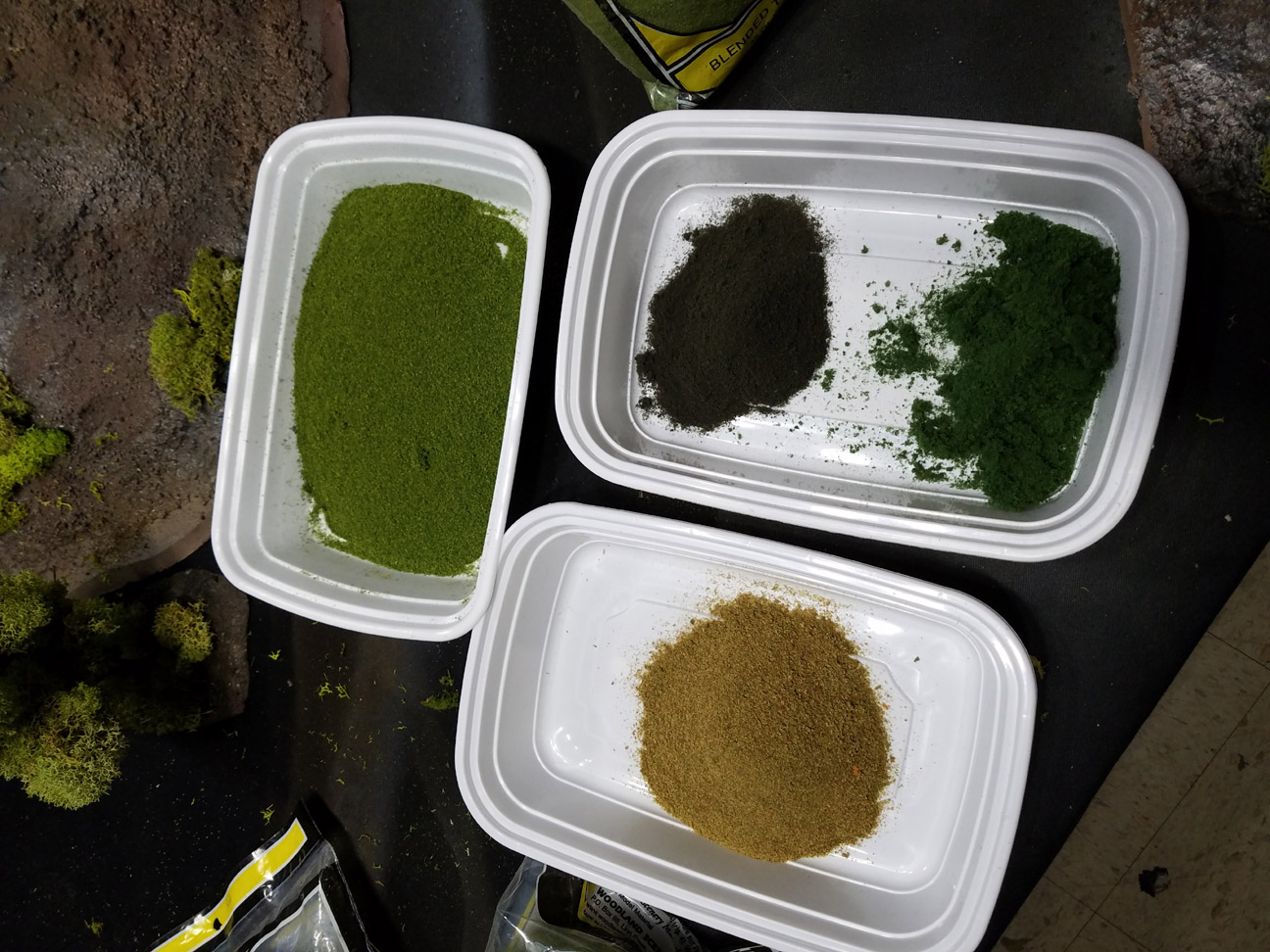 I used the spray adhesive for all of the flocking process.  You can see that I am trying to get as wide a variety as possible in colors and textures, starting off with the banks of the river.  I will tackle the bushes later. 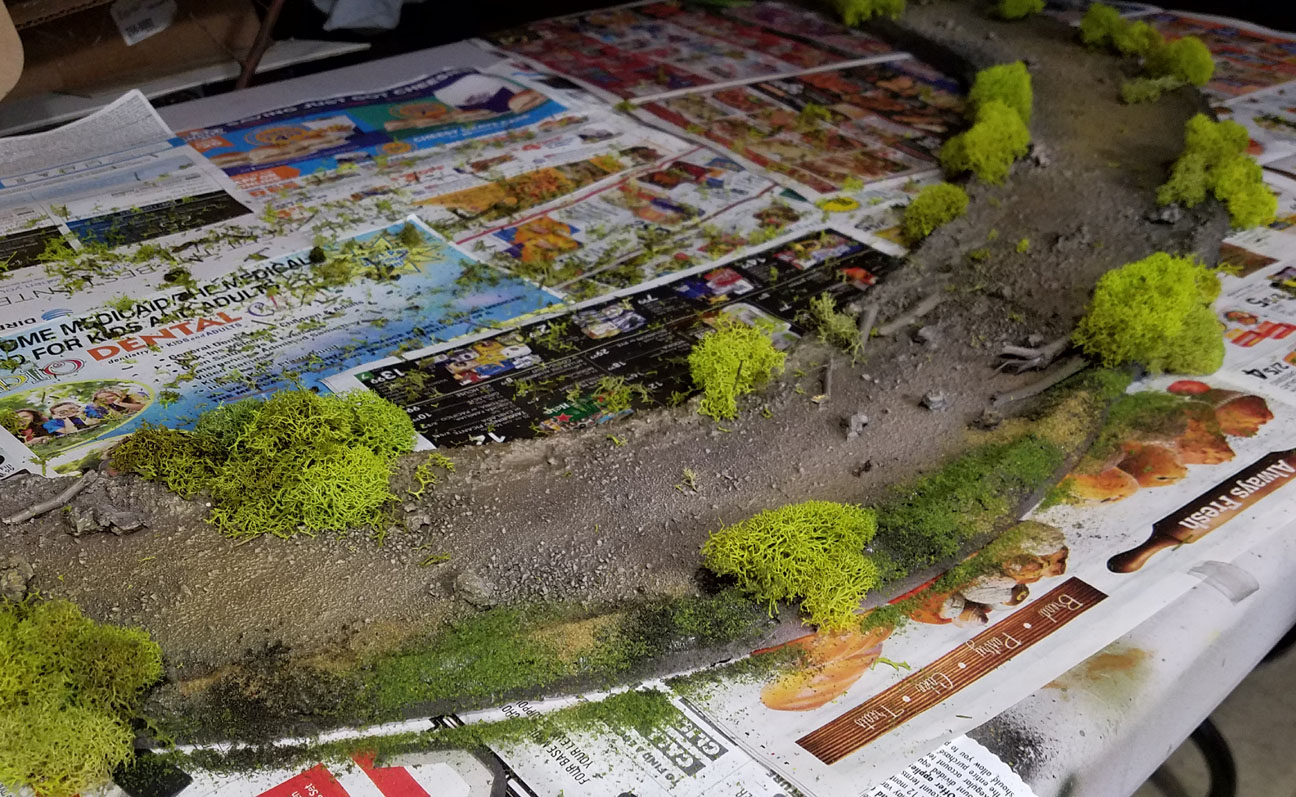 Once the banks of the river have their flock texture, I started to apply that to the moss clumps as well.  I am still amazed at how much the flock transforms the very obvious moss clumps into trees!  More of the heavy green flock was used on the banks to mask the regular shape that was created.

In the future I will try to make rivers with a more irregular bank, but this was a first attempt, and it was a lot faster to make the raised edges of the banks this way.

Be sure to have lots of newspaper on hand, because each time to spray the glue, you will have a very sticky surface. 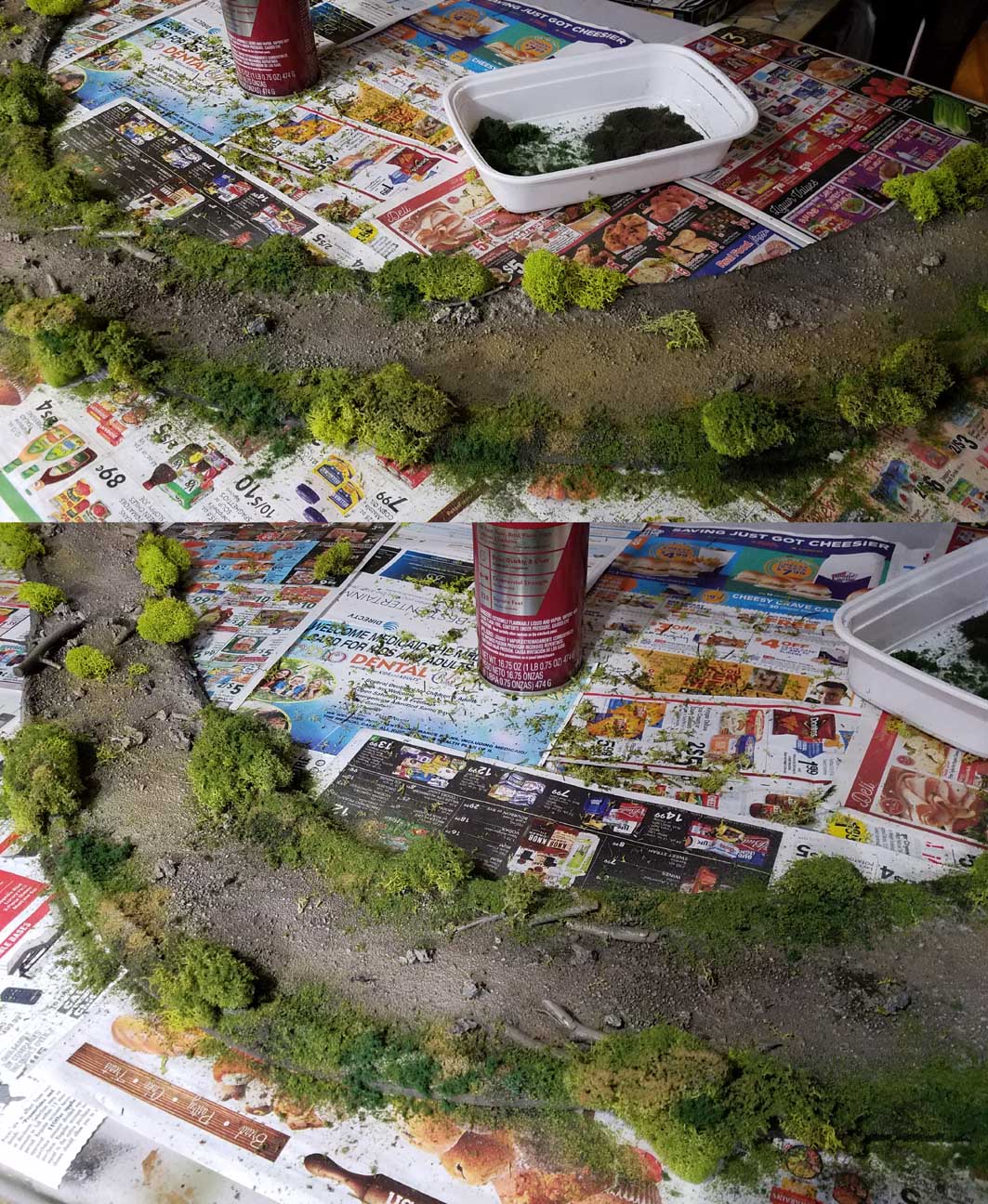 The same process was followed on the smaller tree stands, and you can see the difference between the two in this image.  It is stunning to see how those non descript clumps suddenly look so real. 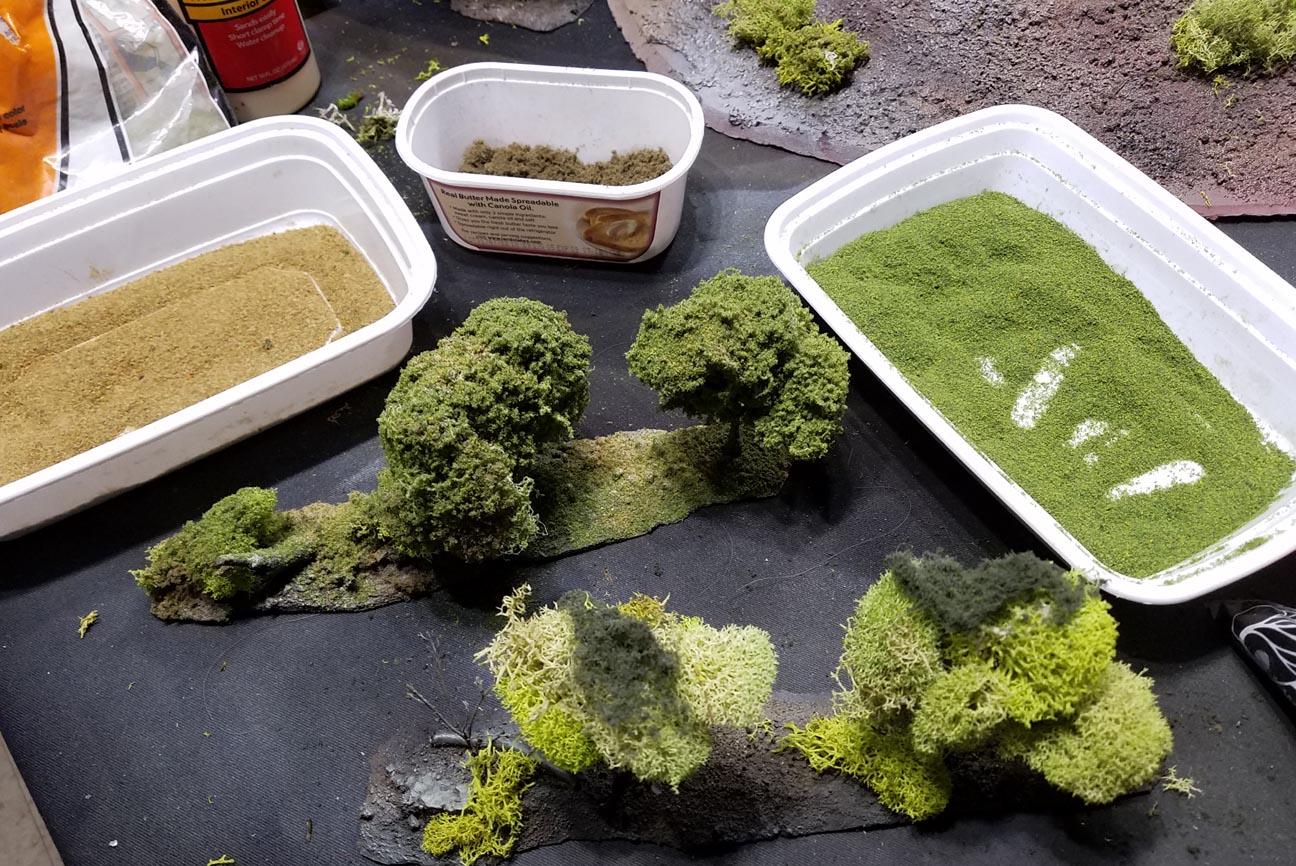 My larger trees were equally satisfying.  I used as wide a variety of colors and shades as I could so that the trees would look larger. 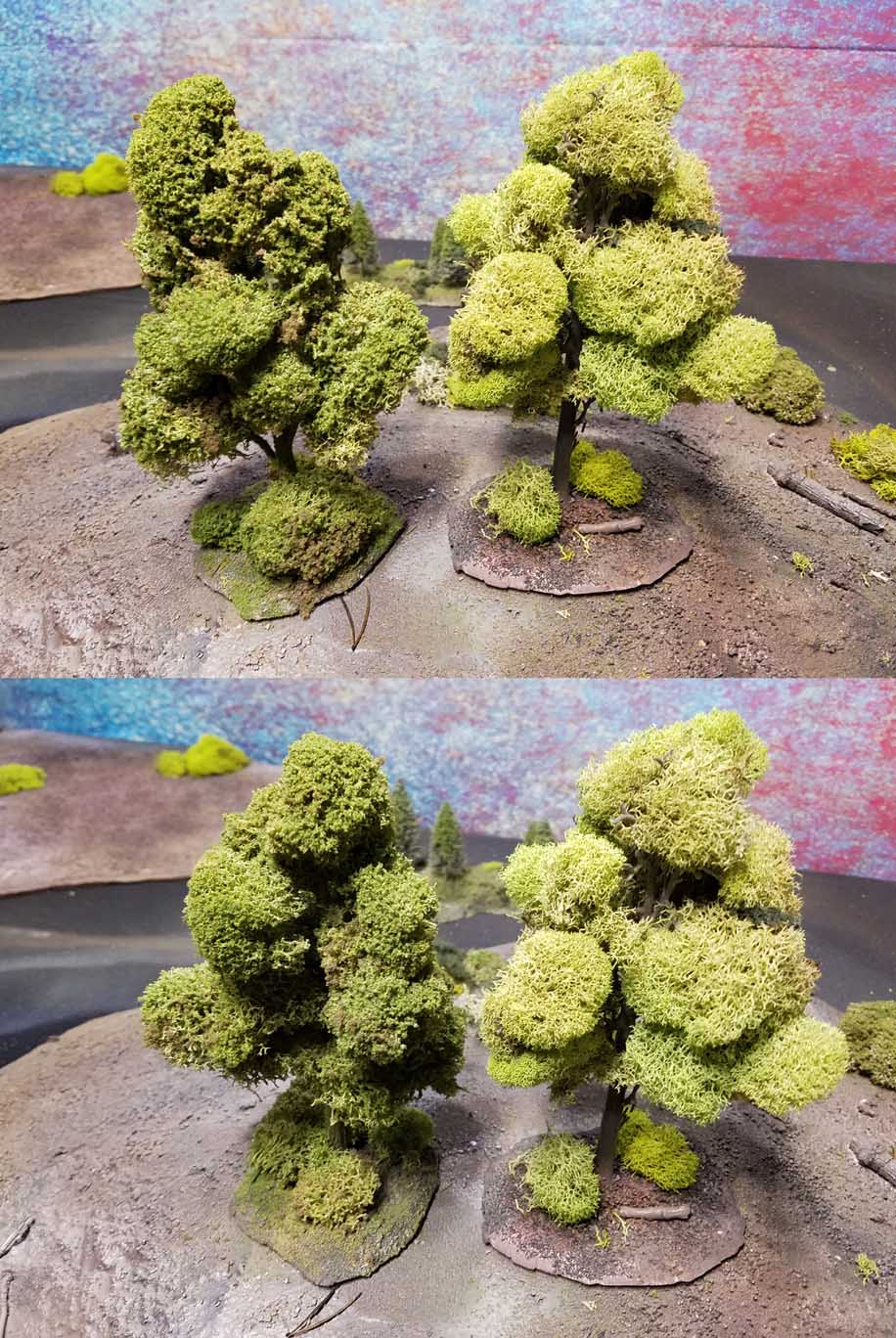 Meanwhile, I was also trying out the stands which were made with the Poly Fiber.  Don't be too freaked out by the white residue left by the spray adhesive.  That is all covered up by the flock!

I did like the Poly Fiber material, as it is very light, and very strong.  A little can go a long way as I discovered.  It is ideal for the tops of very tall trees, so that they are less top heavy. 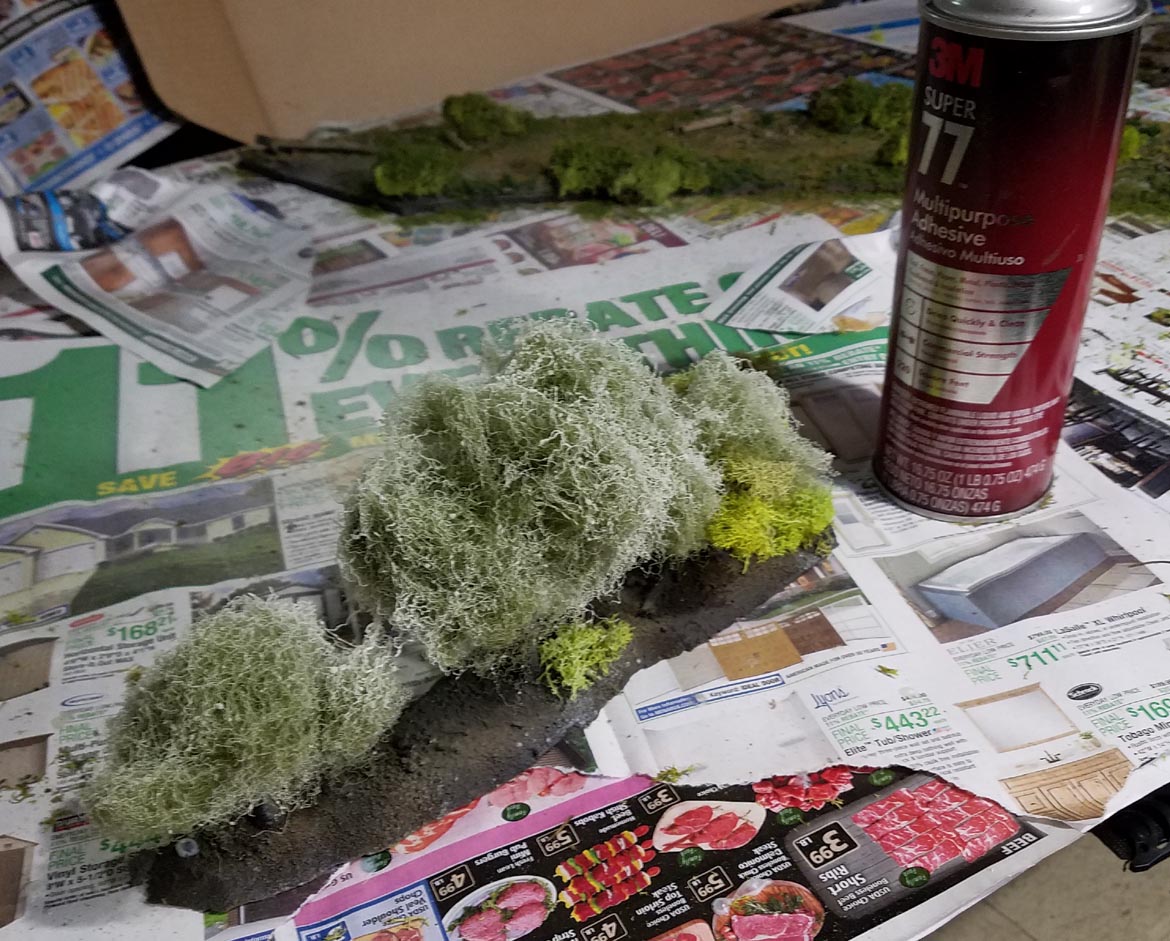 The large hills were a challenge, but I managed to get the same kid of variety on them as well.  I will cover that more in the next episode, so stay tuned! 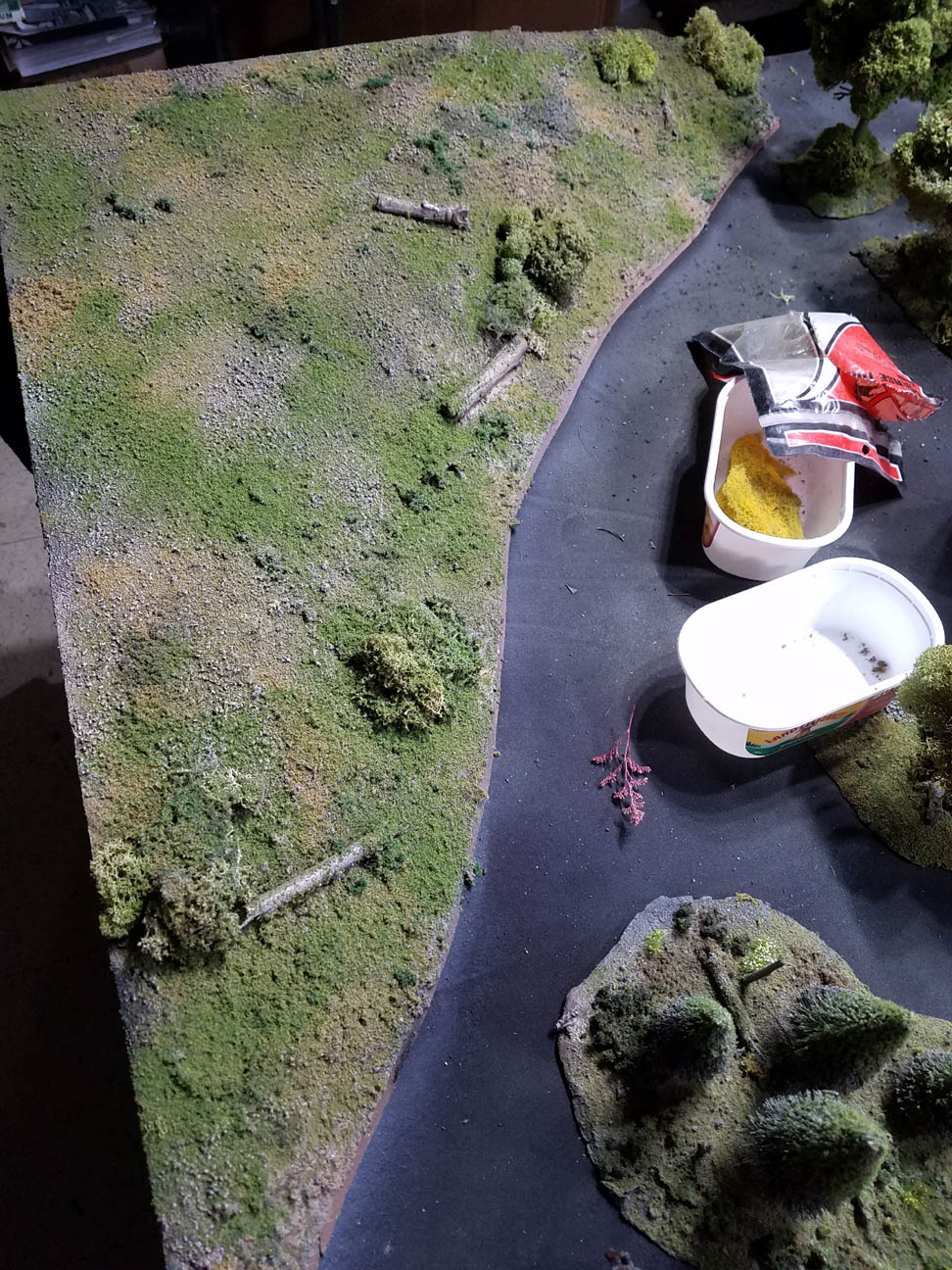