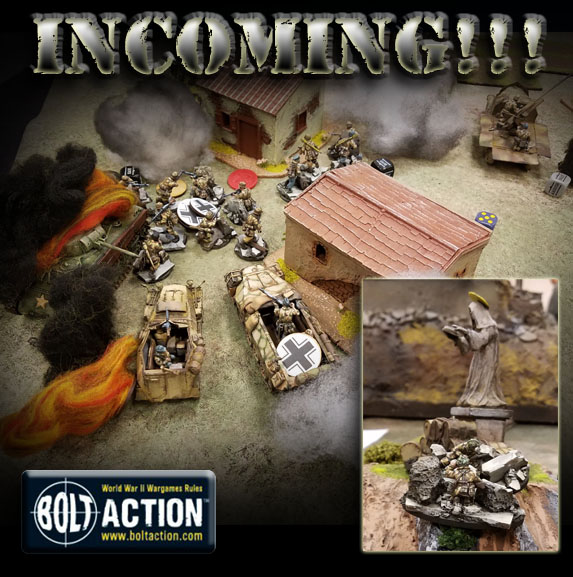 The second round of Operation Sting saw all kinds of mayhem!  The mission was fairly straightforward, focusing on objectives, but the "Secret Missions" added an extra layer of madness.

Mine happened to be holding a specific piece of terrain, and keeping the enemy a certain distance from it. 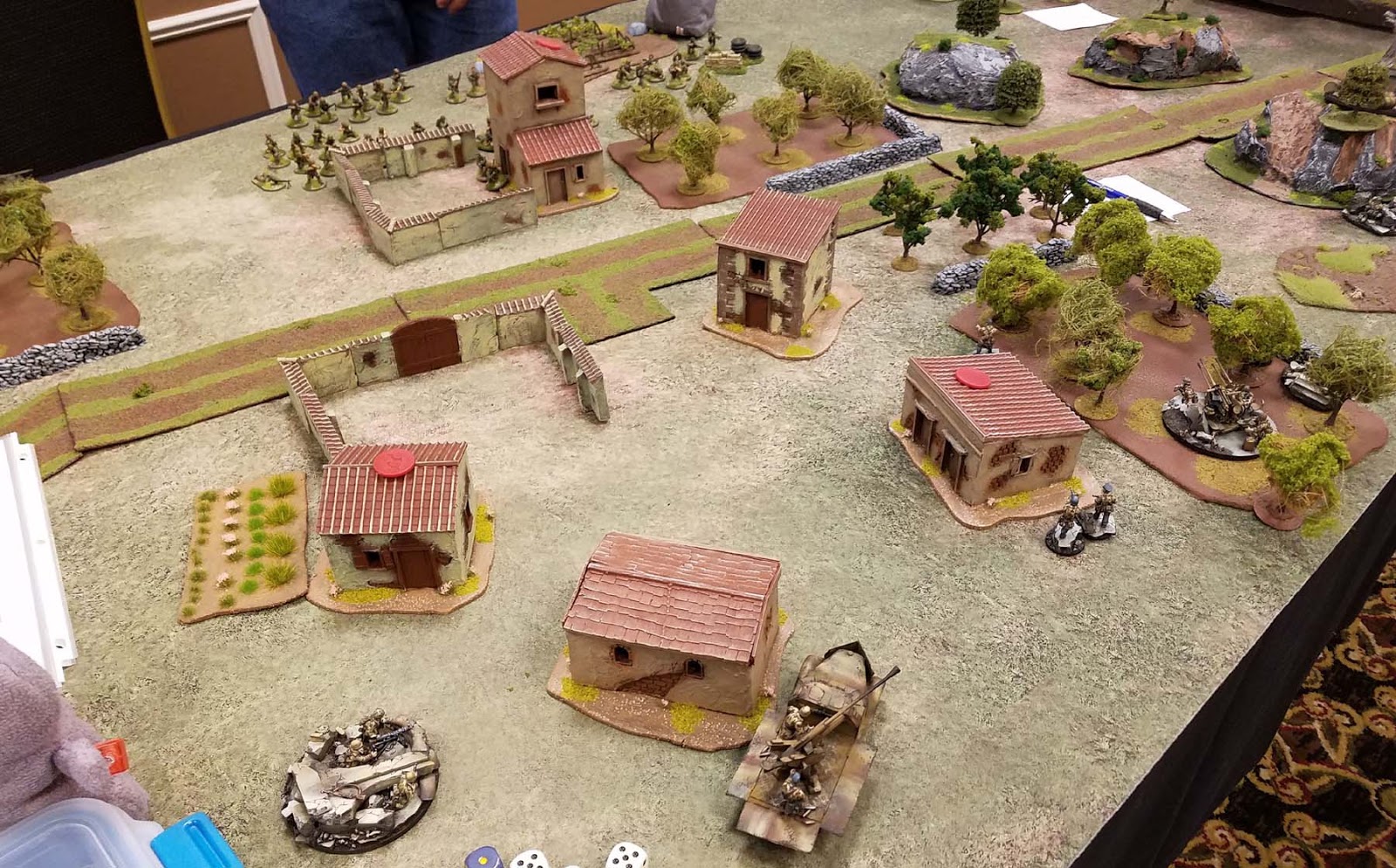 As you might recall from the first post, you had 8 of those Secret Missions to choose from for the 5 rounds.  Once you used one, it was not available for future rounds.  I thought this scenario would mesh with that mission very well, since I had to keep the enemy away from an objective located near that structure. 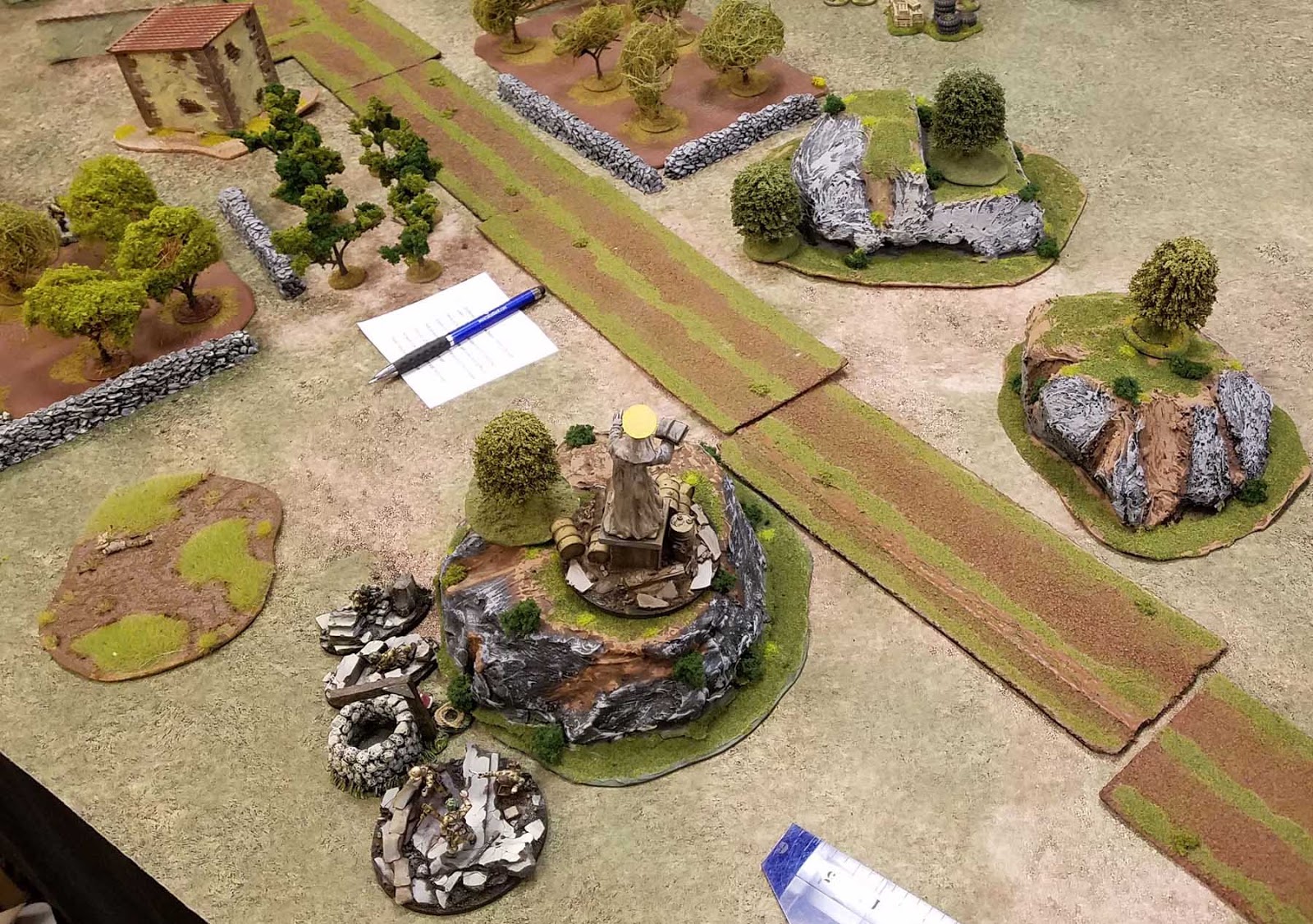 Here's my scratch sculpted objective marker, which was one of those objectives that needed to be held. 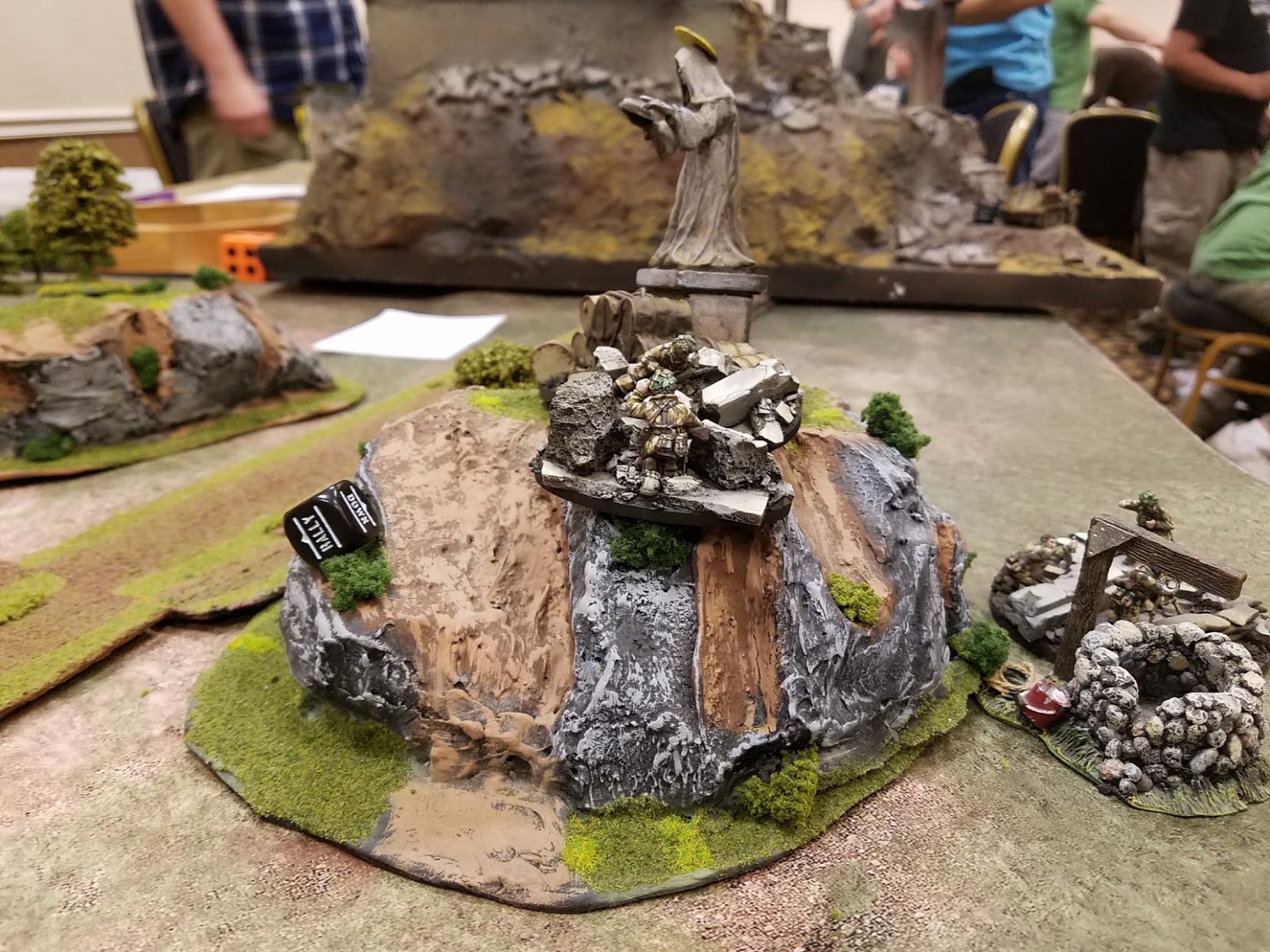 As usual, the static quad AAA launcher sat there and did nothing the entire game. The mobile version was a little more active, although it had a lot of trouble hitting anything! 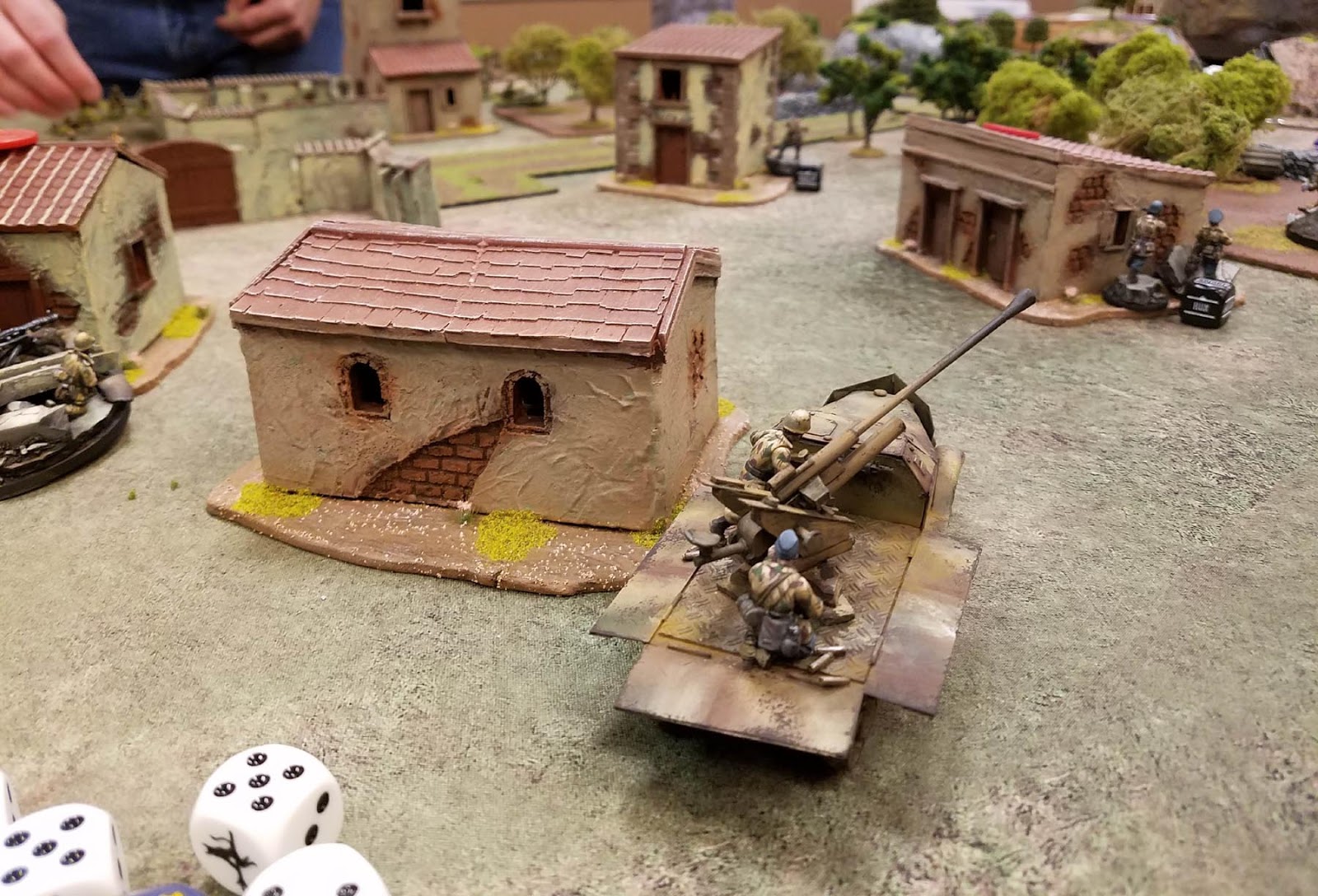 Just as I did in round 1, all of my Fallschirmjager squads were left in reserve, so that I could react to the US moves towards my objectives.  Yes, it was another game against US forces.

I will mention once again that it was really nice to have Axis vs Allied match ups in every round.  It is really odd and disappointing to have US vs US, or Brits vs French, etc. 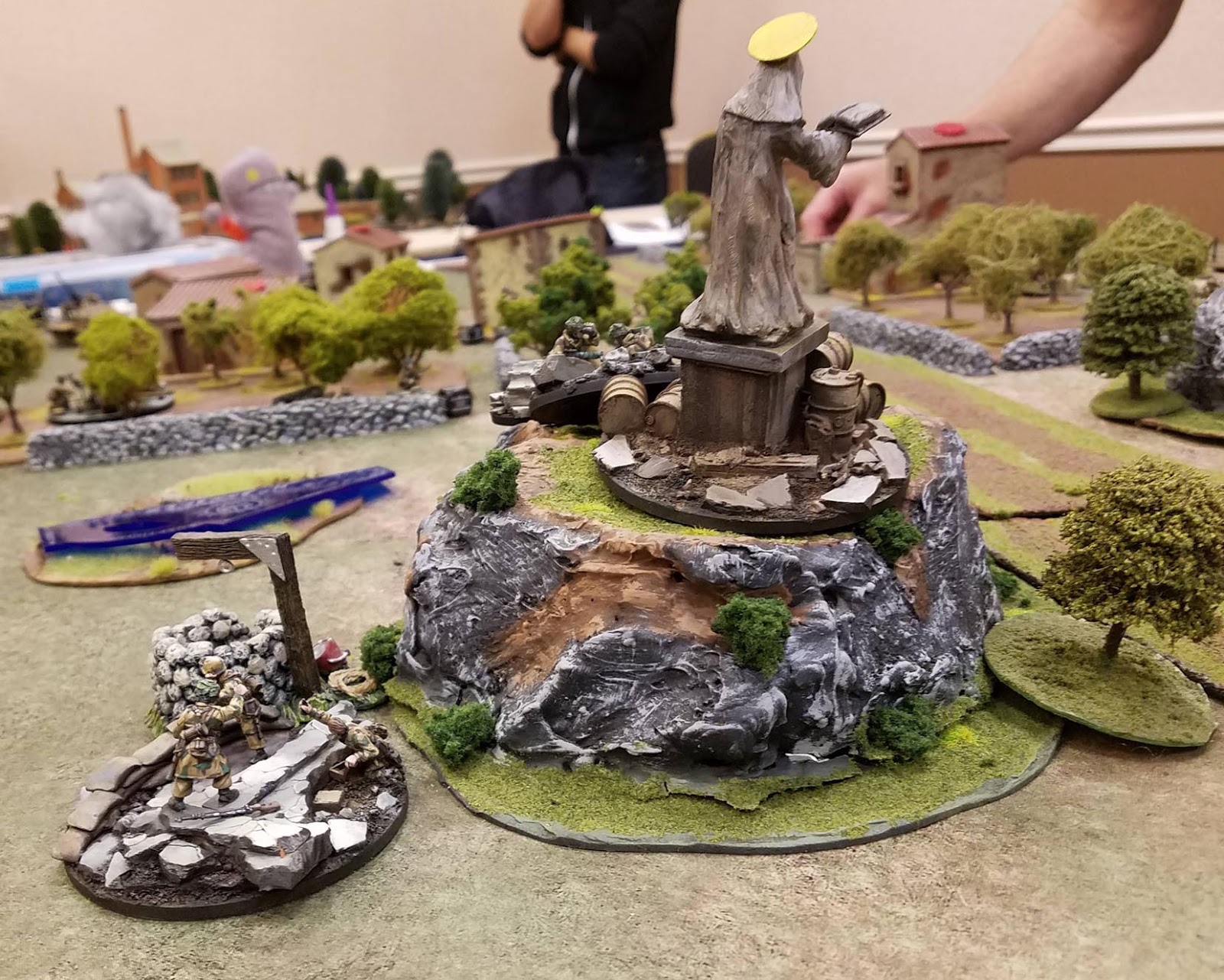 This little bit of action here was a result of the primary mission being mixed with the secret mission.  That red counter is the objective which the US player was after.  However, that was also the marker that I needed to keep free of enemy encroachment!

My artillery strike had wandered just a bit, and of course it went off right in the middle of all these units.  As you might expect, I rolled one 6 after another on my own units, which is why you see all these blast markers.  I destroyed both of my transports, and piled up pins on my own infantry.

It was a complete mess!  The forward artillery observer has since been recalled to headquarters where Smiling Kesselring is not smiling too much... 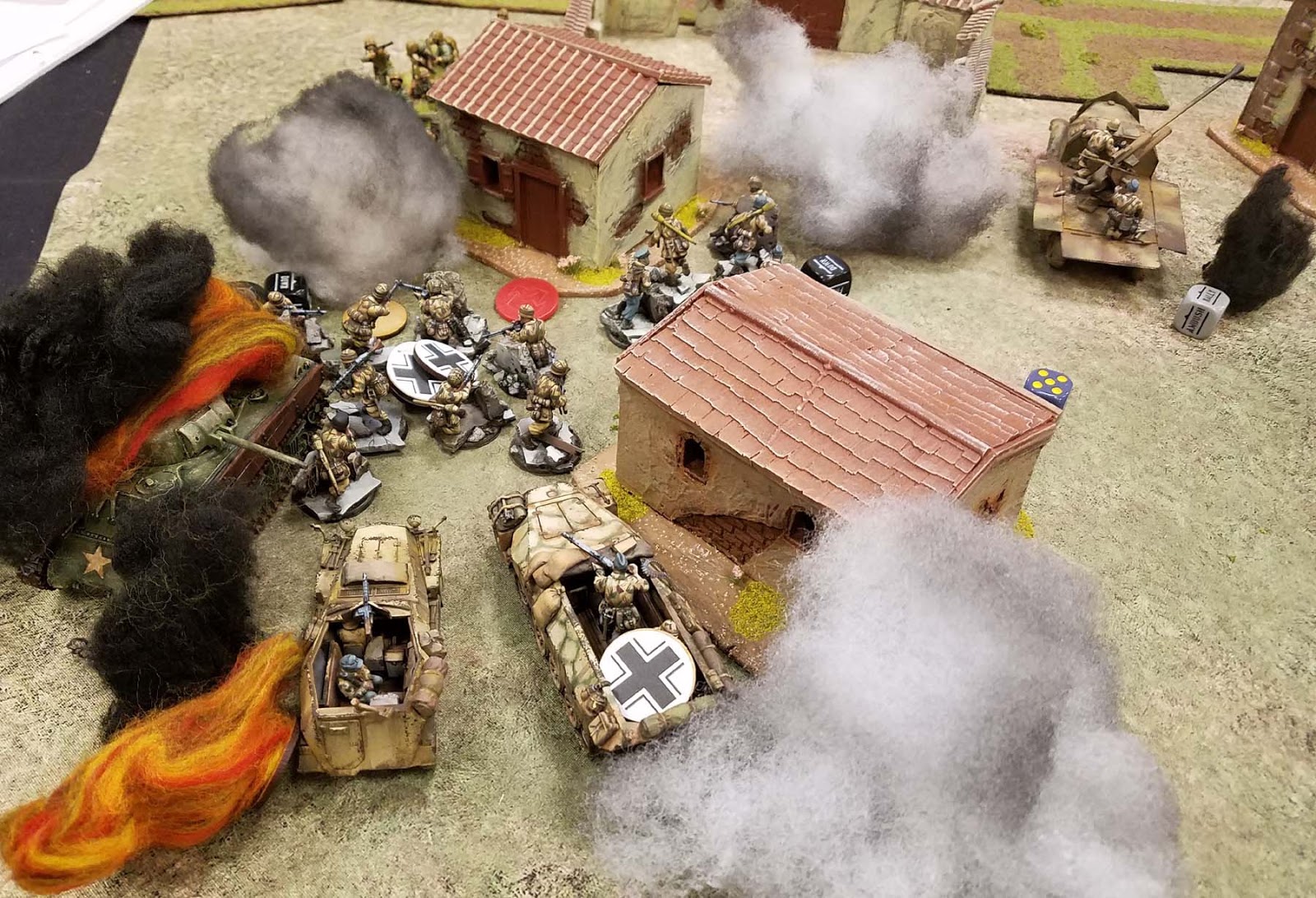 This was not the only mayhem that went on in Round 2.  I don't have any photos of it, but on the opposite side of the board, a full unit of Submachine gun armed Fallschirmjager nearly lost to an isolated mortar spotter team!

This would prove to be crucial, because that unit would be slowed down in its approach to the vital "swing" objective. 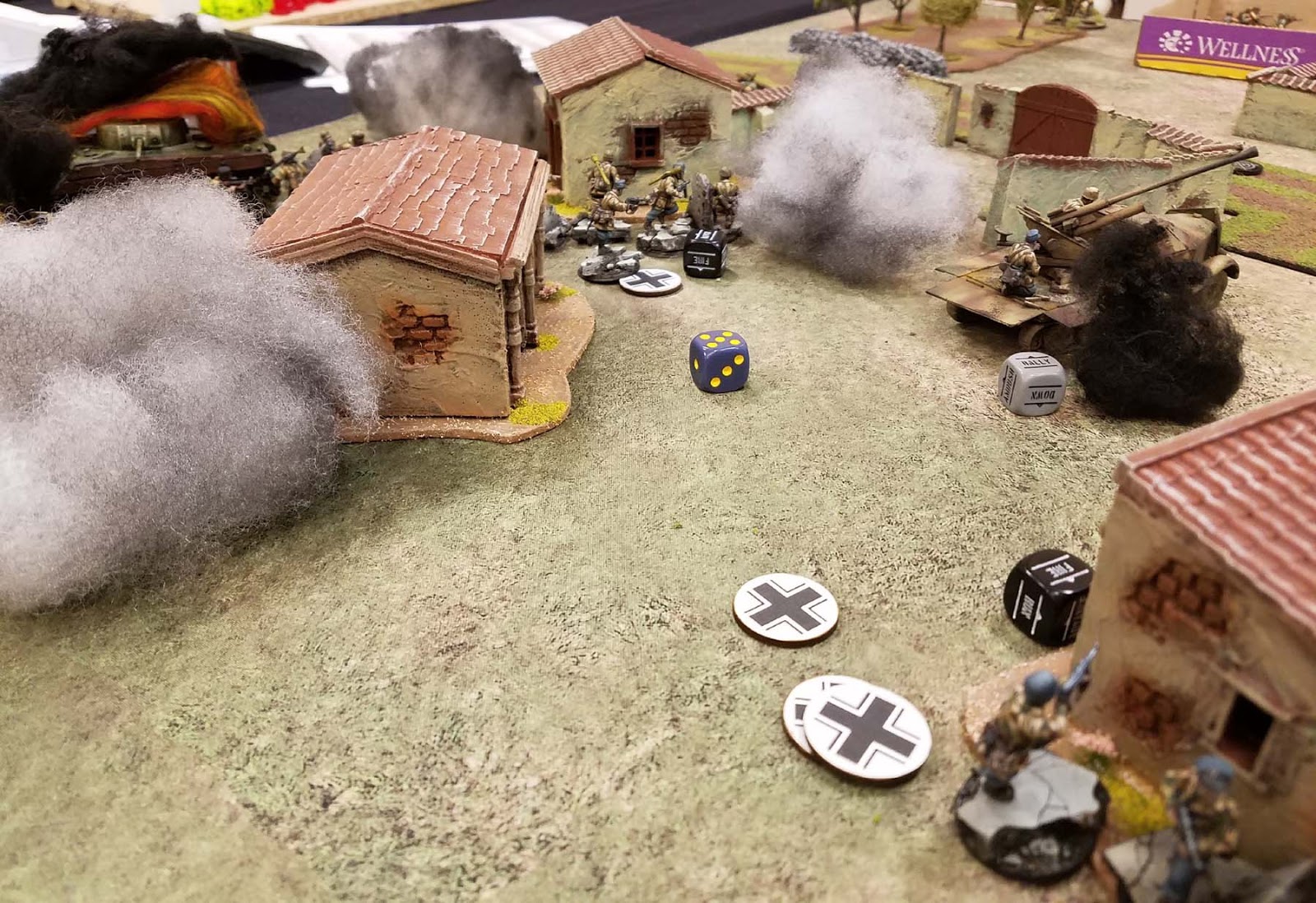 Also, Gene was trying to accomplish his Secret Mission, which was to have his medic heal one wound.  As it happens, that finally occurred on one of the last rolls of the game.  I was trying to kill off the officer team which was holding the "Swing" objective, and had gotten the two wounds that I needed!  However... the medic healed at least one of them, and that objective would still count for the Allies.

The final result of that game was a draw, since the lone US unit in the blast zone was pinned out of existence.  Otherwise, I would not have been able to move them from that objective.

That's what I like about Bolt Action... you don't have to kill things to make them useless or leave the board all together.  I think there were at least 2 occasions where units were destroyed by pins in my 5 games.

Stay tuned for Round 3, where we see the most unusual opponent list imaginable! 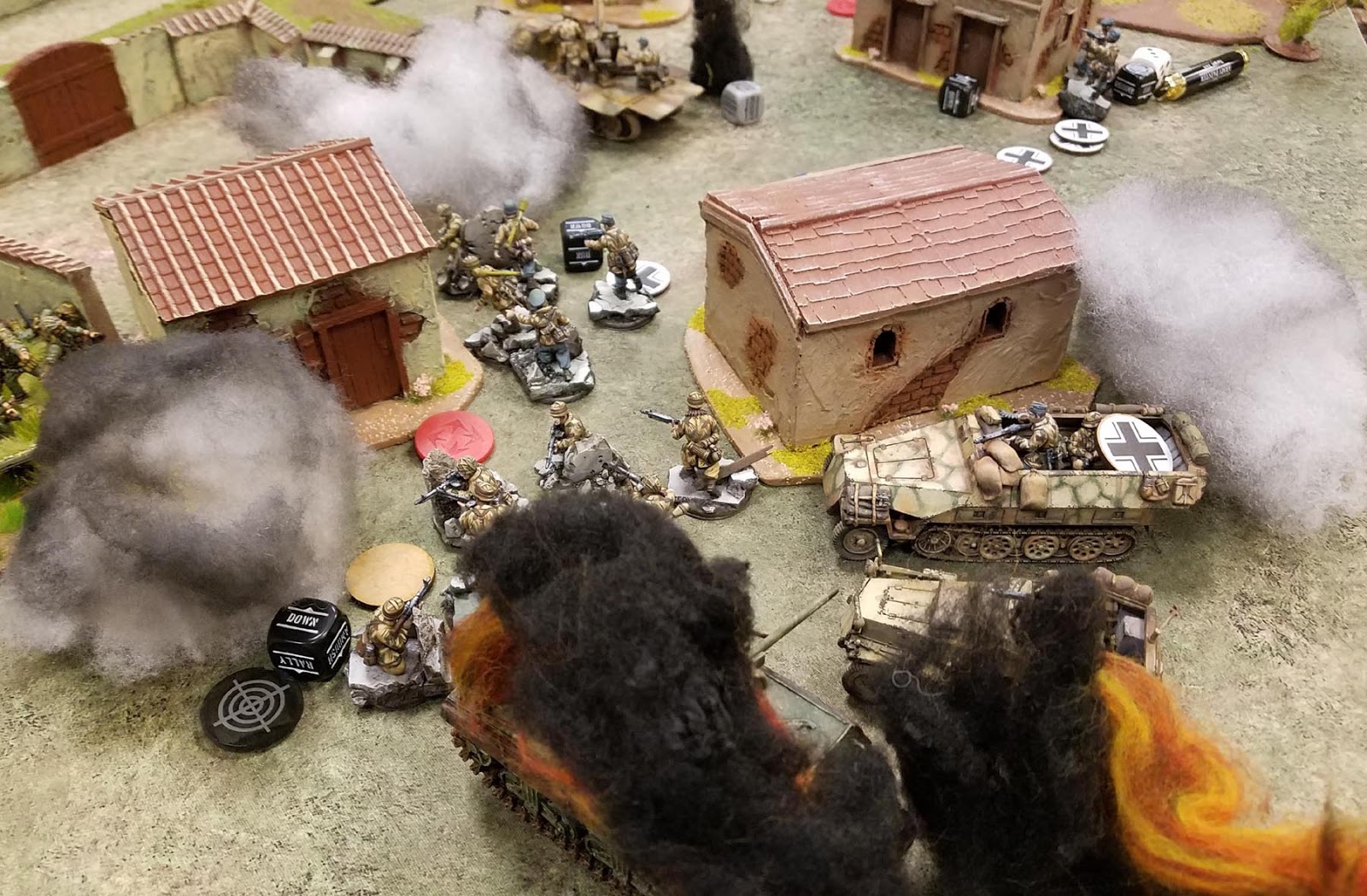 Posted by wappellious at 4:17 PM 2 comments: