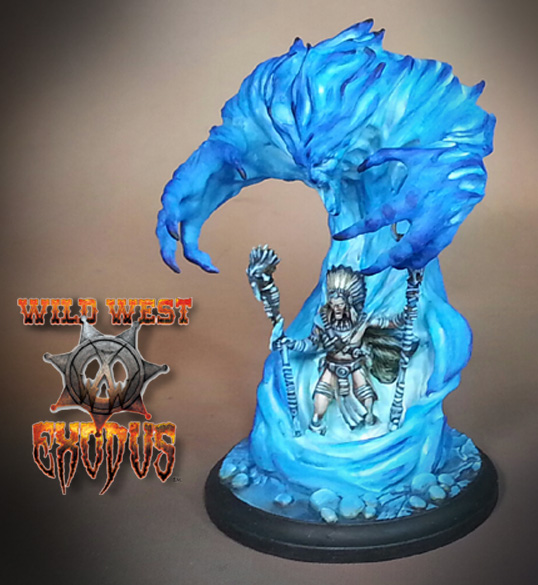 The energy of the Great Spirit is focused in this most powerful of summoned apparitions. 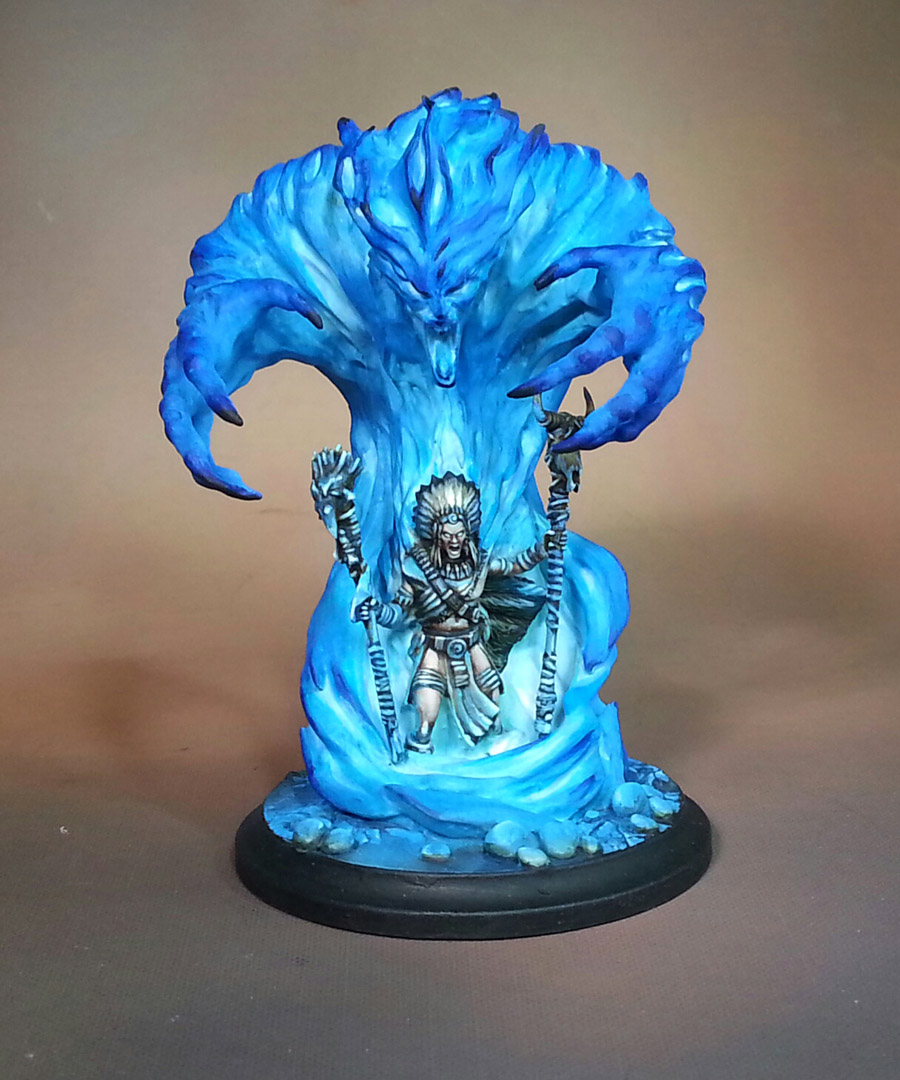 Chief Raven Spirit is a new Warrior Nation boss for Wild West Exodus, and he can channel some serious energy! 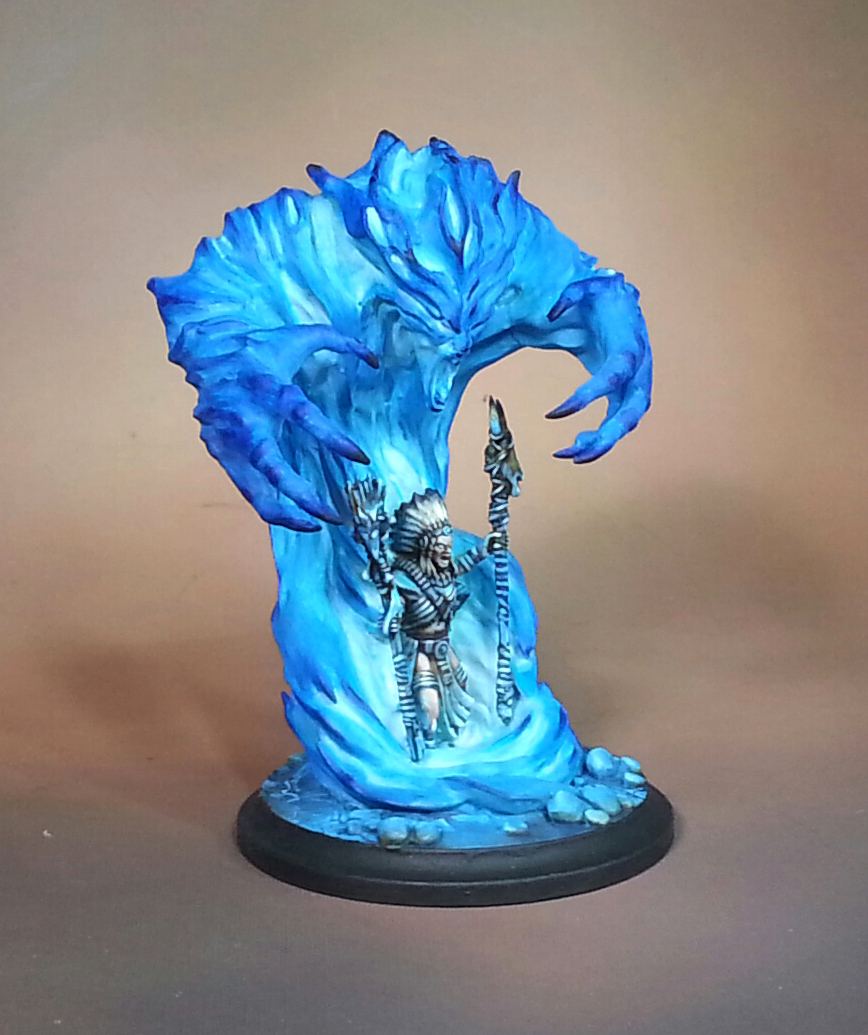 With a whopping 5 influence, Raven Spirit is more than a match for Cartpathian, and even the Legendary characters. 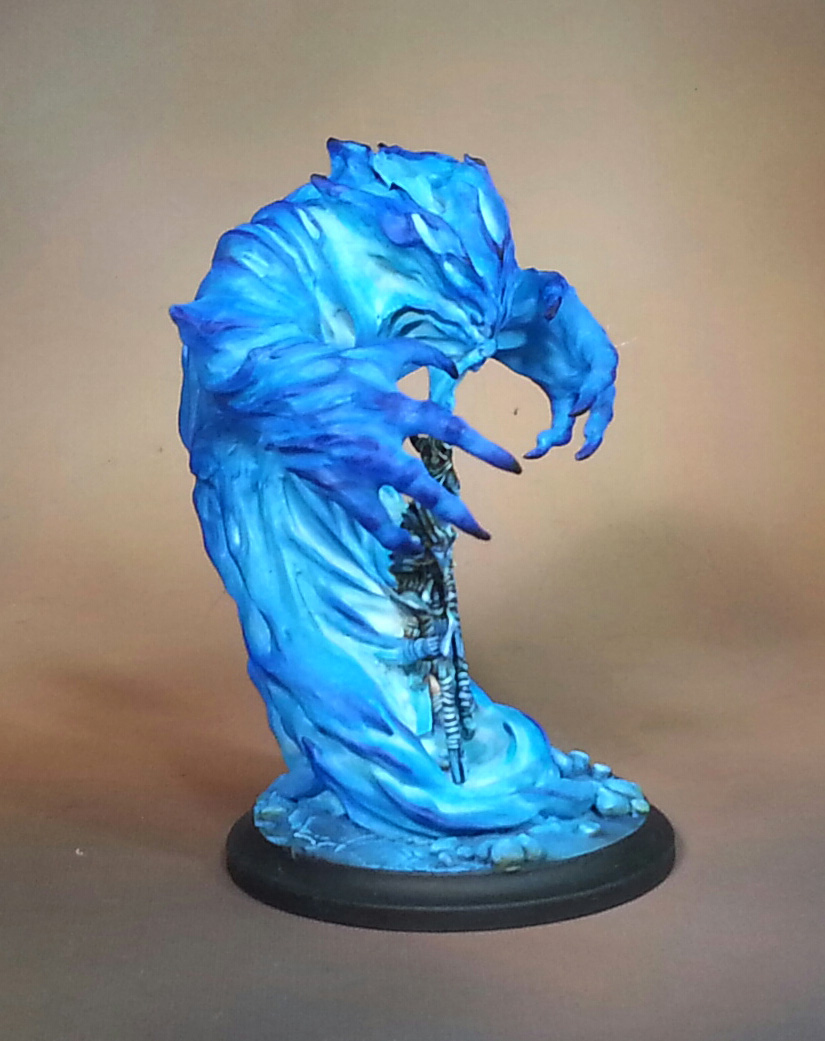 The threat range is enormous on this pair.  A fire causing, armor piercing blast can deal with the long range enemies, while the Spiritual Flame template can clear out entire buildings.  Yes, and set fire to enemies along the way! 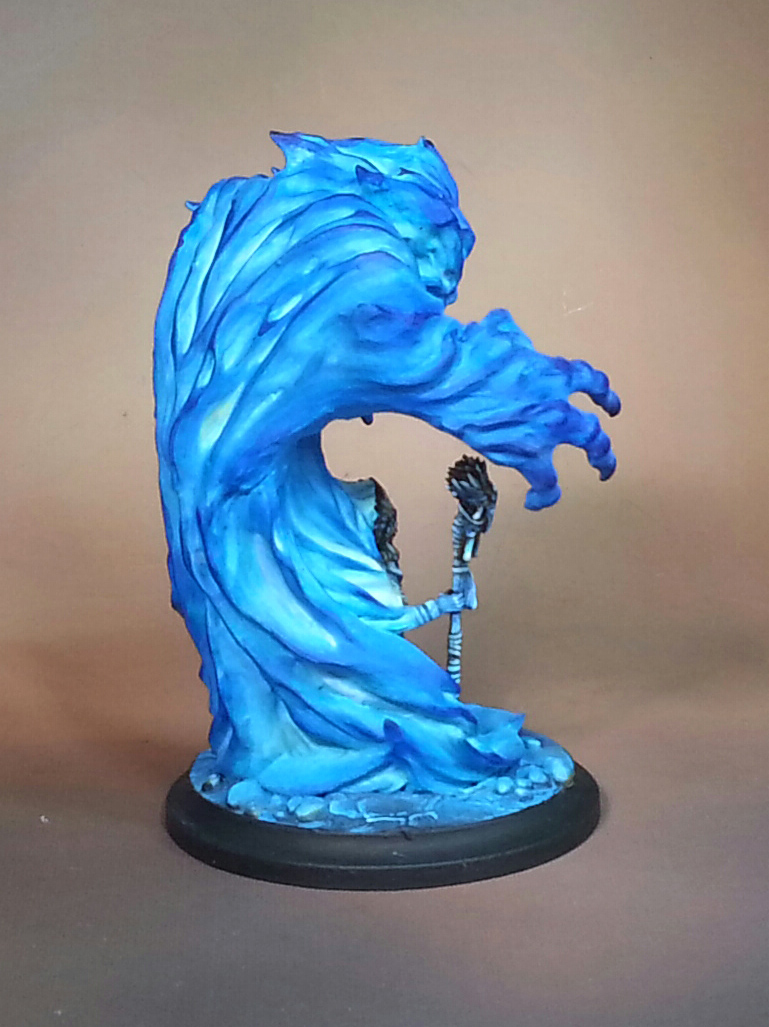 Not to be outdone, the apparition itself has an enormous 3.5 inch combat halo, comprised of his two massive spiritual claws.  Once again, they cause fire damage.  Fire season is about to begin!!! 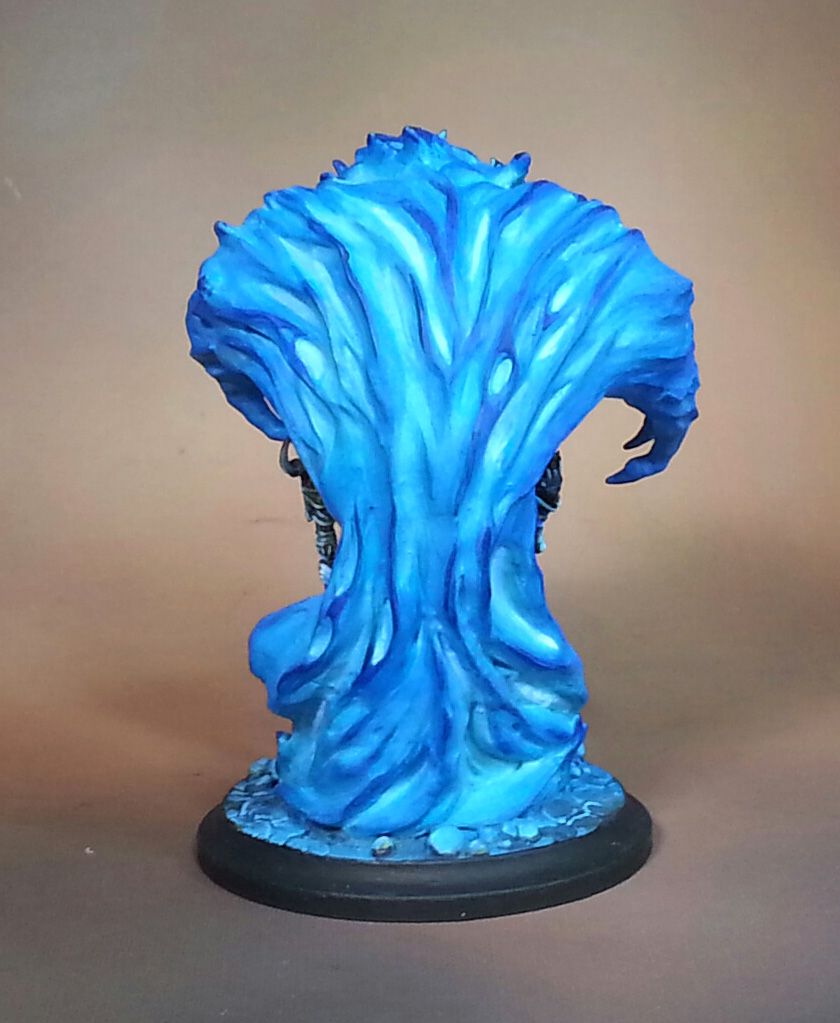 But wait, that's not all!  In a case of "Now you see me, and now you don't",  they can teleport themselves up to 18 inches in any direction.  Wow.  No front line can hold against that! 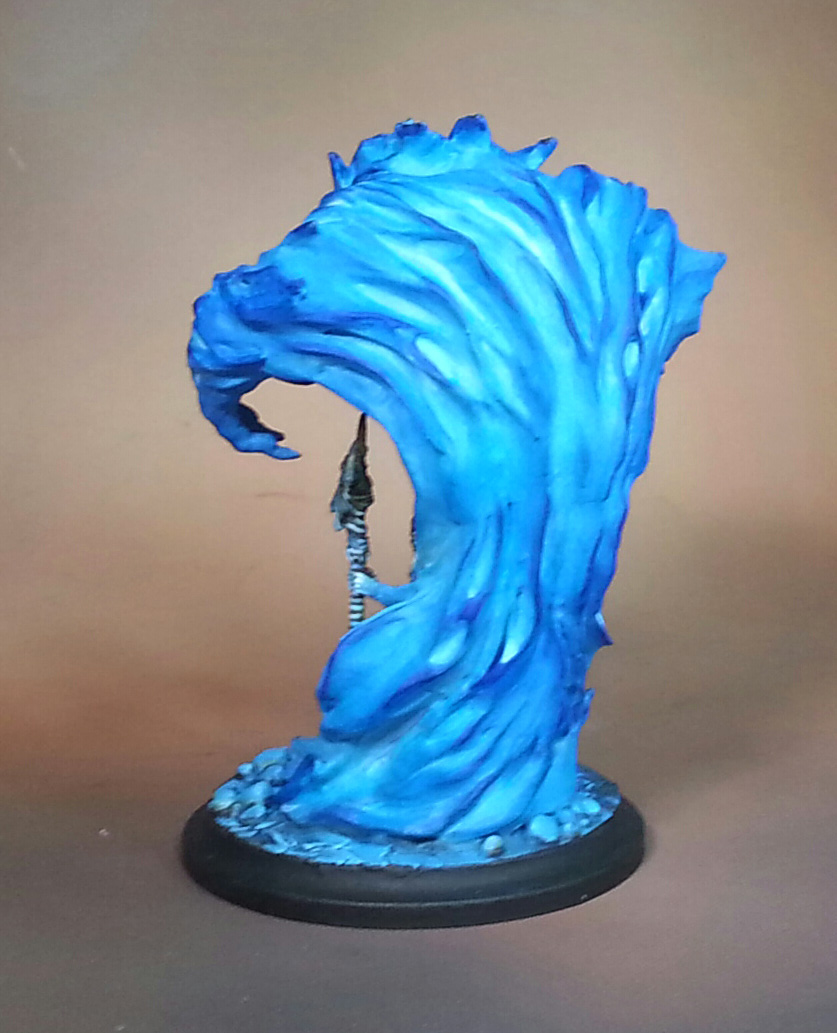 He can also call 'regular' apparitions as well, up to two of them at a time. 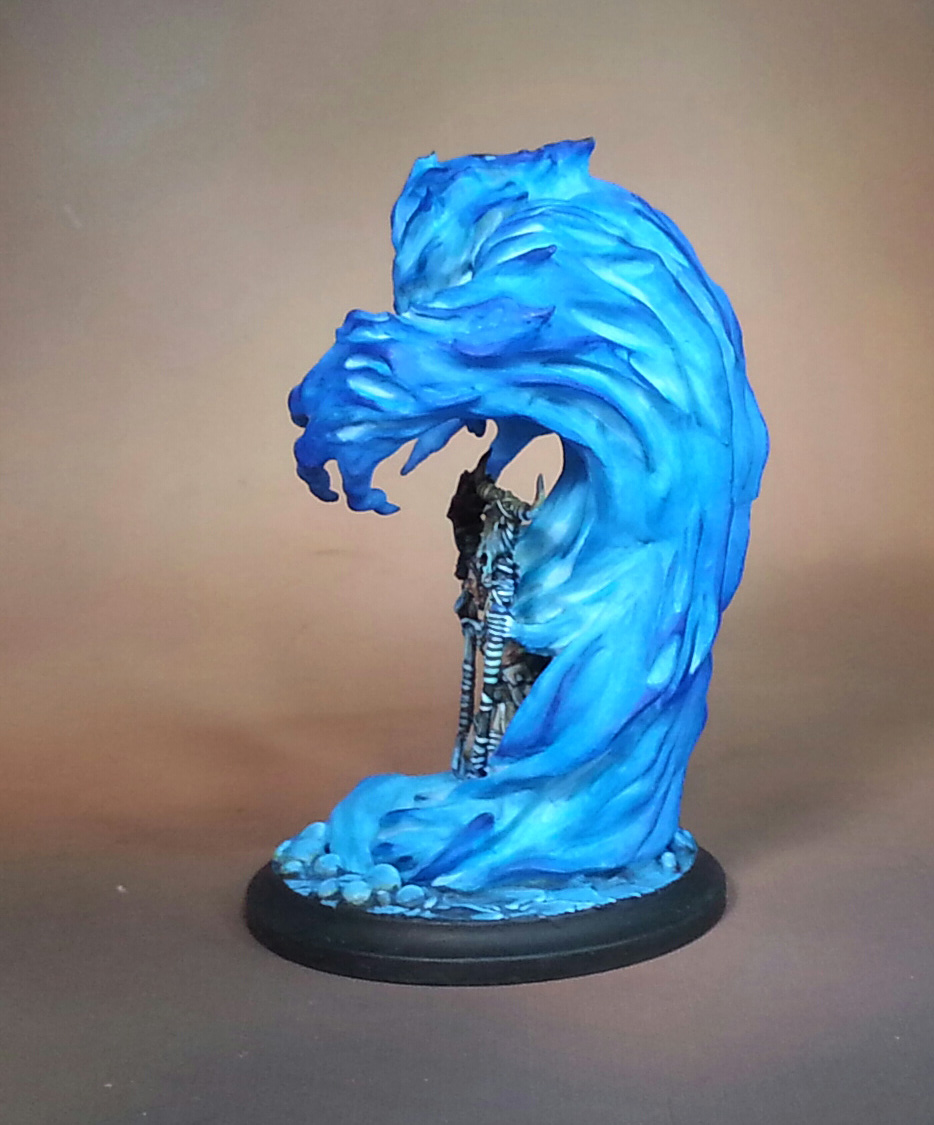 I am visualising an all fire causing list, with Raven Spirit, War Priests, Iron Hawk, White Buffalo, a Fire Bringer, and an Eagle. 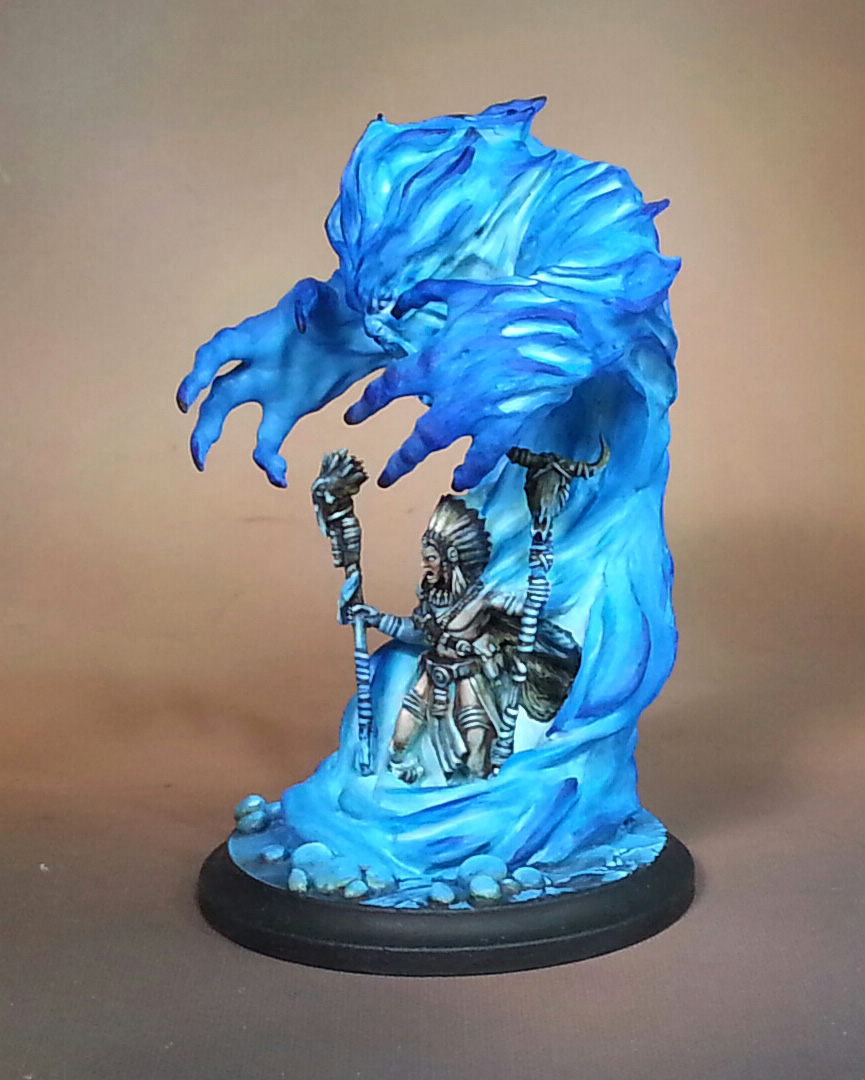 This will be a very interesting contrast to my Monster Mash list that I have already created for my Warrior Nation.  It will be a real blast! :-) 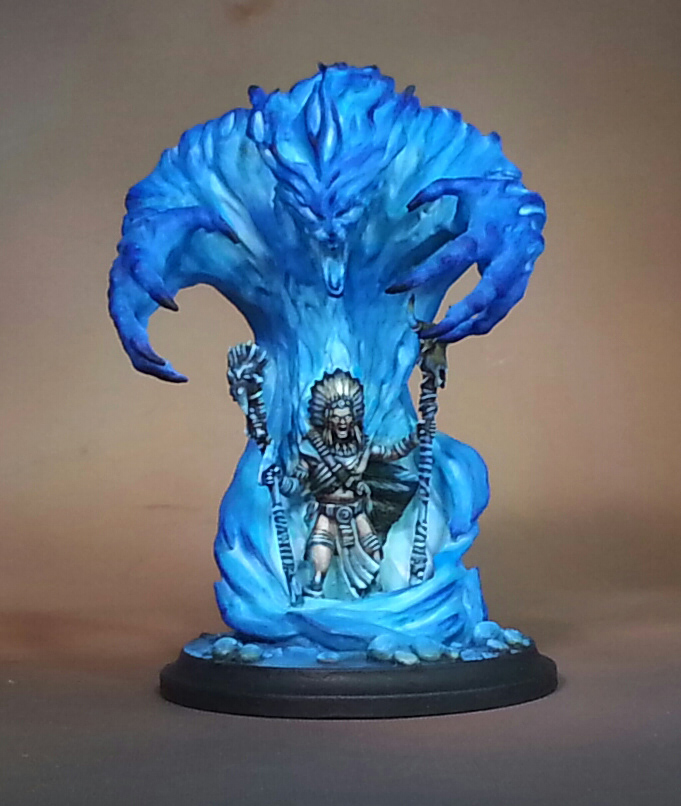 Posted by wappellious at 1:11 PM 9 comments:

On a more massive scale 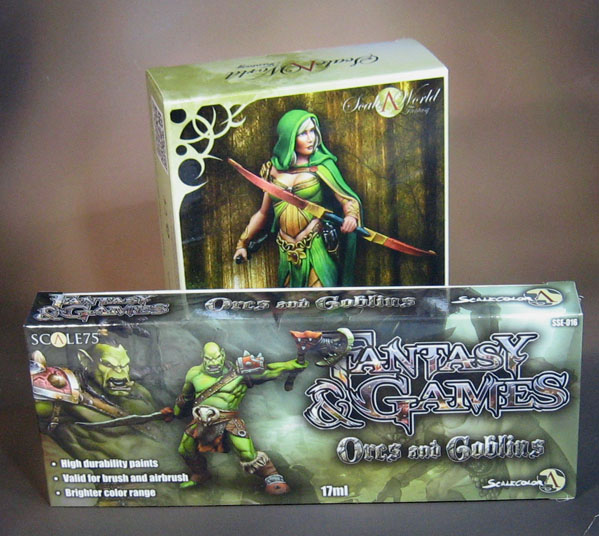 This fantastic 75mm sculpt is about to get a new home, which is under construction now.  Scale 75 is the manufacturer, where you can find a host of these amazing beauties!!

Along with my first large scale bust, this will also be the first 70+ mm sculpt that I have ever painted. 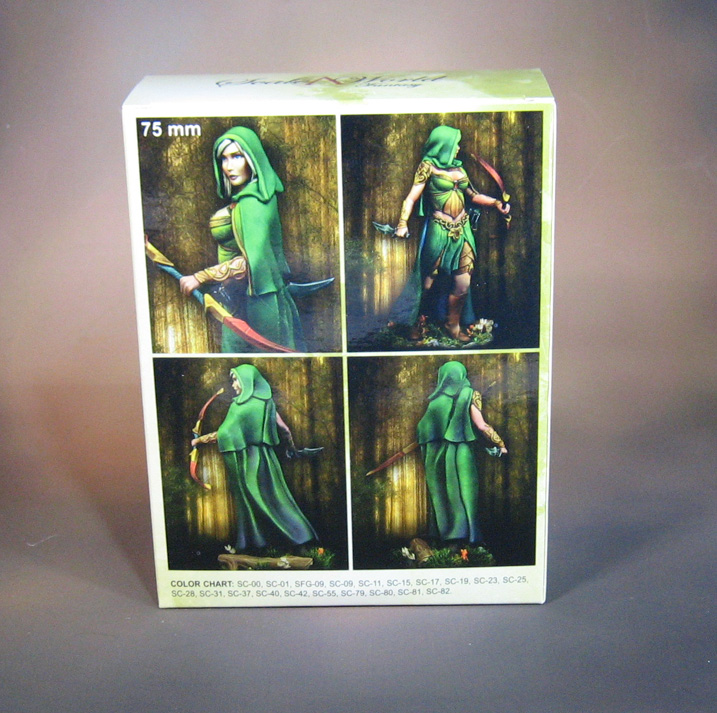 The experimentation will continue as I also test some new paints... at least for me.  This is part of the ScaleColor line. 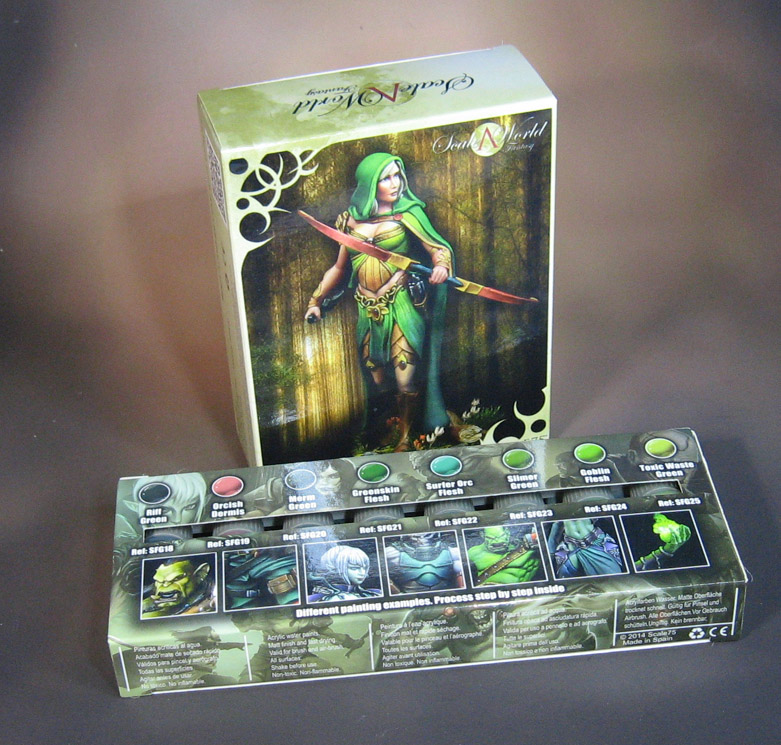 I may secure one or two other colors as well, in the yellow range, but I will see just how far these can be taken.  Using the lime green as a yellow should be quite interesting!! 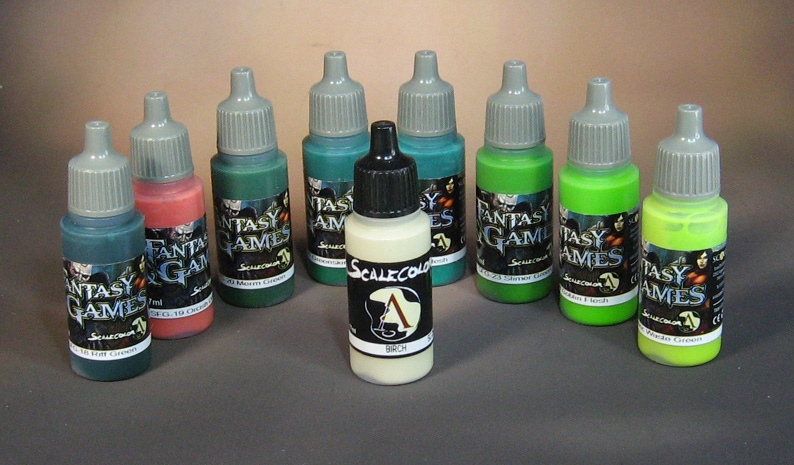 To the miniature, where we see the pieces prior to assembly. 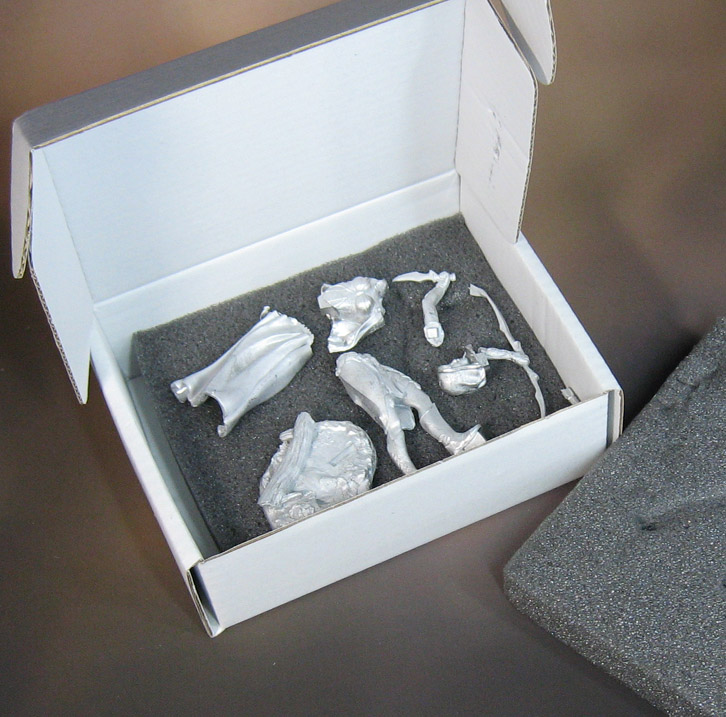 I have seen a great many of these lager scale figures perched on plinths, but I wanted to try something different.

Years ago, I worked almost exclusively in diorama form.  I still have a number of the wooden plaques remaining, and one was chosen as the base for this vignette.

This image shows most of the supplies, such as the various tree bark textures, branches, glue, gravel, and so on.

A quick look inside the bark box shows four distinct textures.  I try to find as many as possible.  At various scales, the texture can take on an entirely different look. 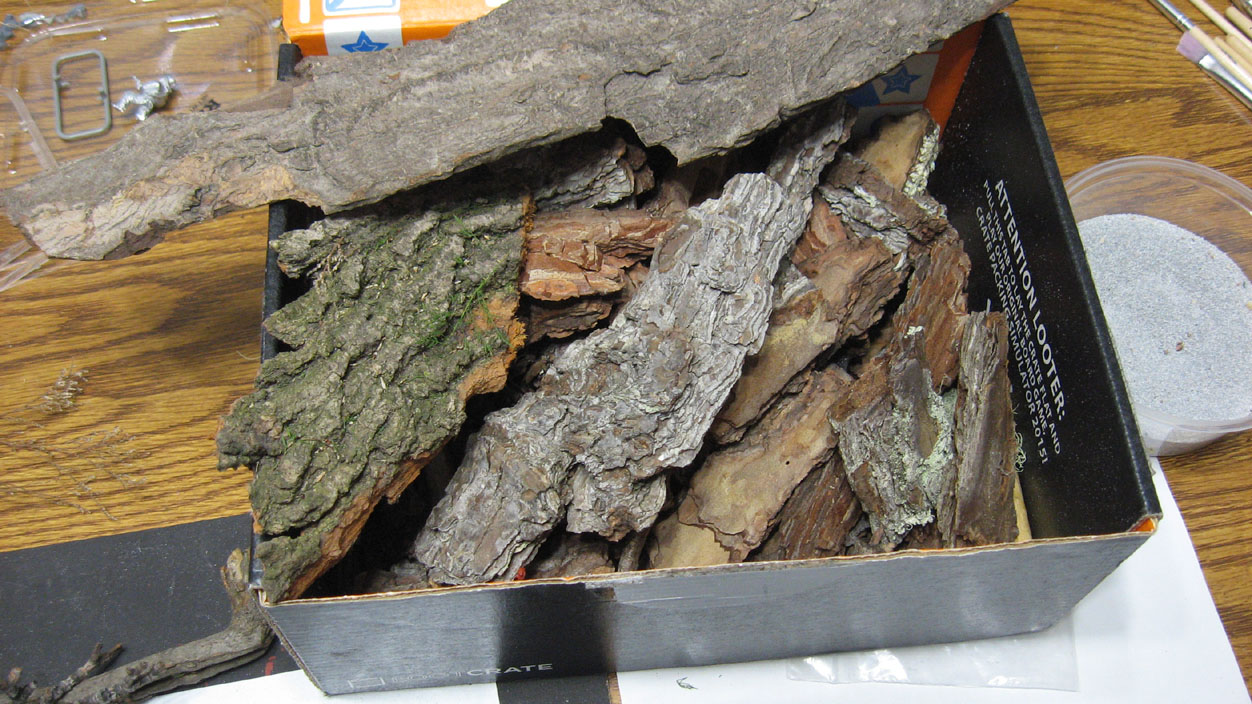 I had a general notion of what I wanted to do, but the available pieces and the figure itself will be the final arbiter of the design.  I usually allow these things to work themselves out as I place various pieces and see what forms they take.

I did want to have some water in this diorama, either in waterfall form or as a stream.  The time of year will most likely be fall, but early winter is not out of the question. 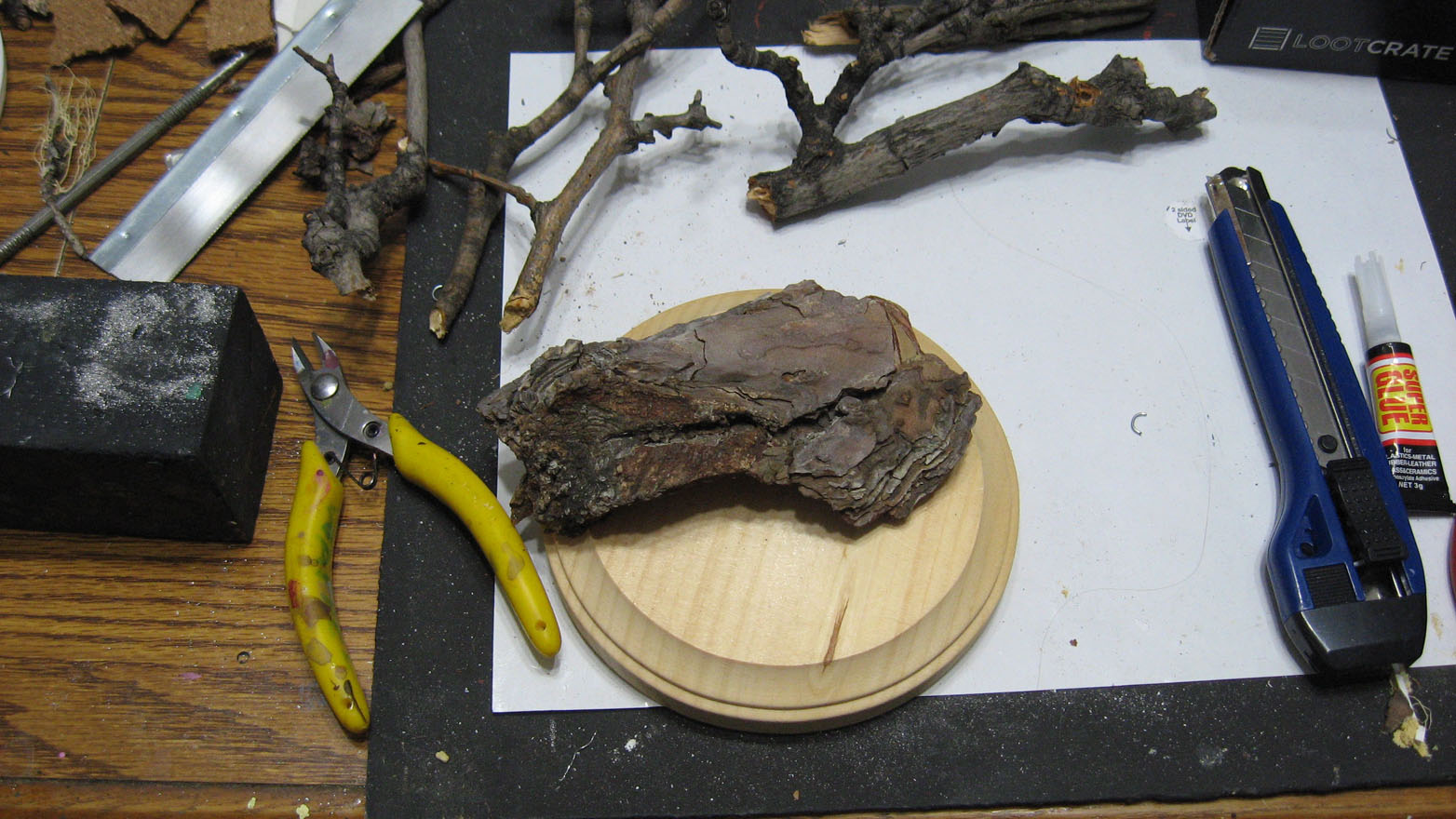 I have a few of these extendable utility knives on hand to shave down the part of the bark that I want to attach to the larger base.  Since this is a large metal figure, it is vital to have as strong a bond as possible. 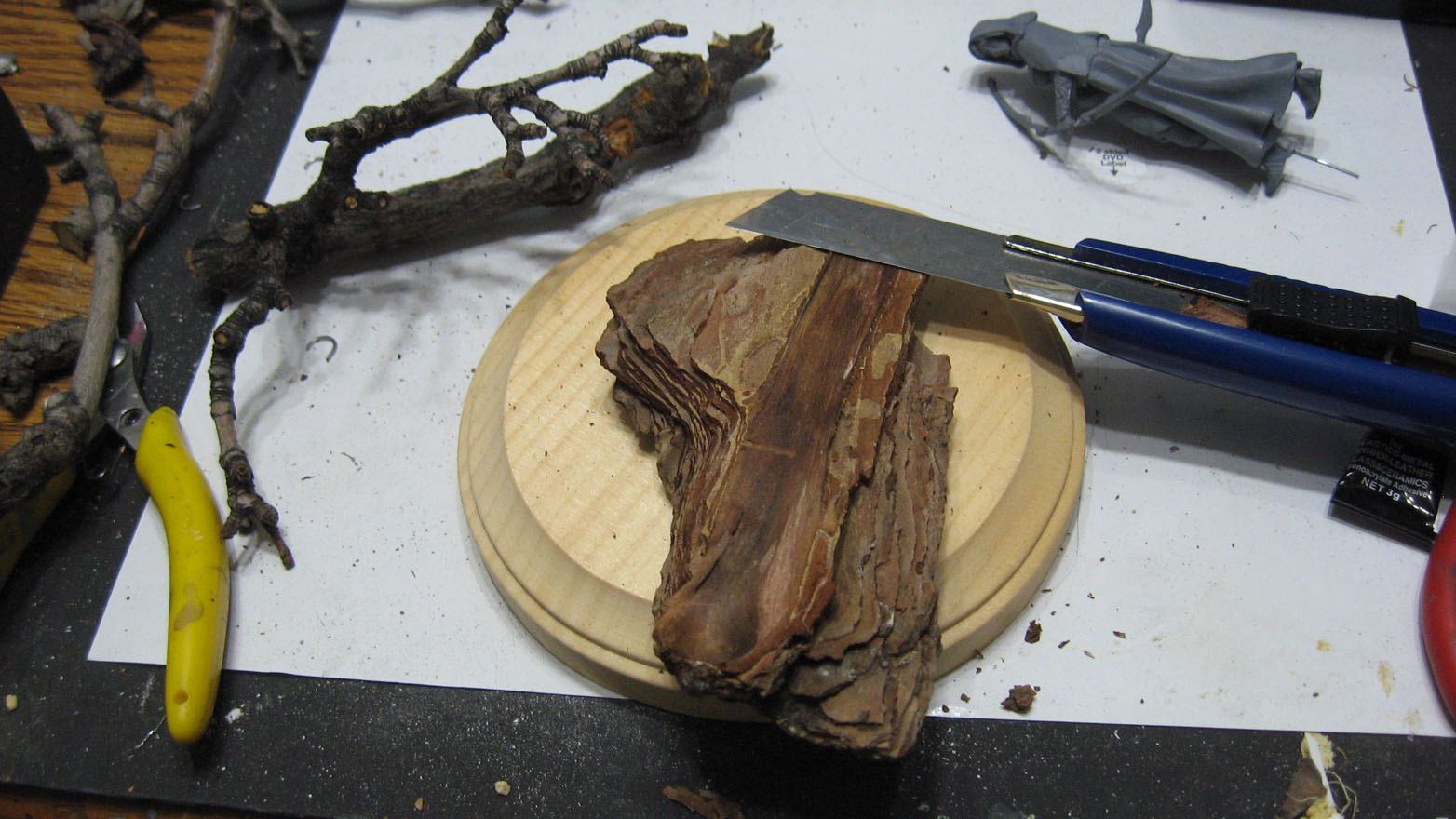 Placing the branches will be covered in the next post, as will the application of the Sand paste and gravel.  A number of posts on the construction of this diorama will follow, so stay tuned!! 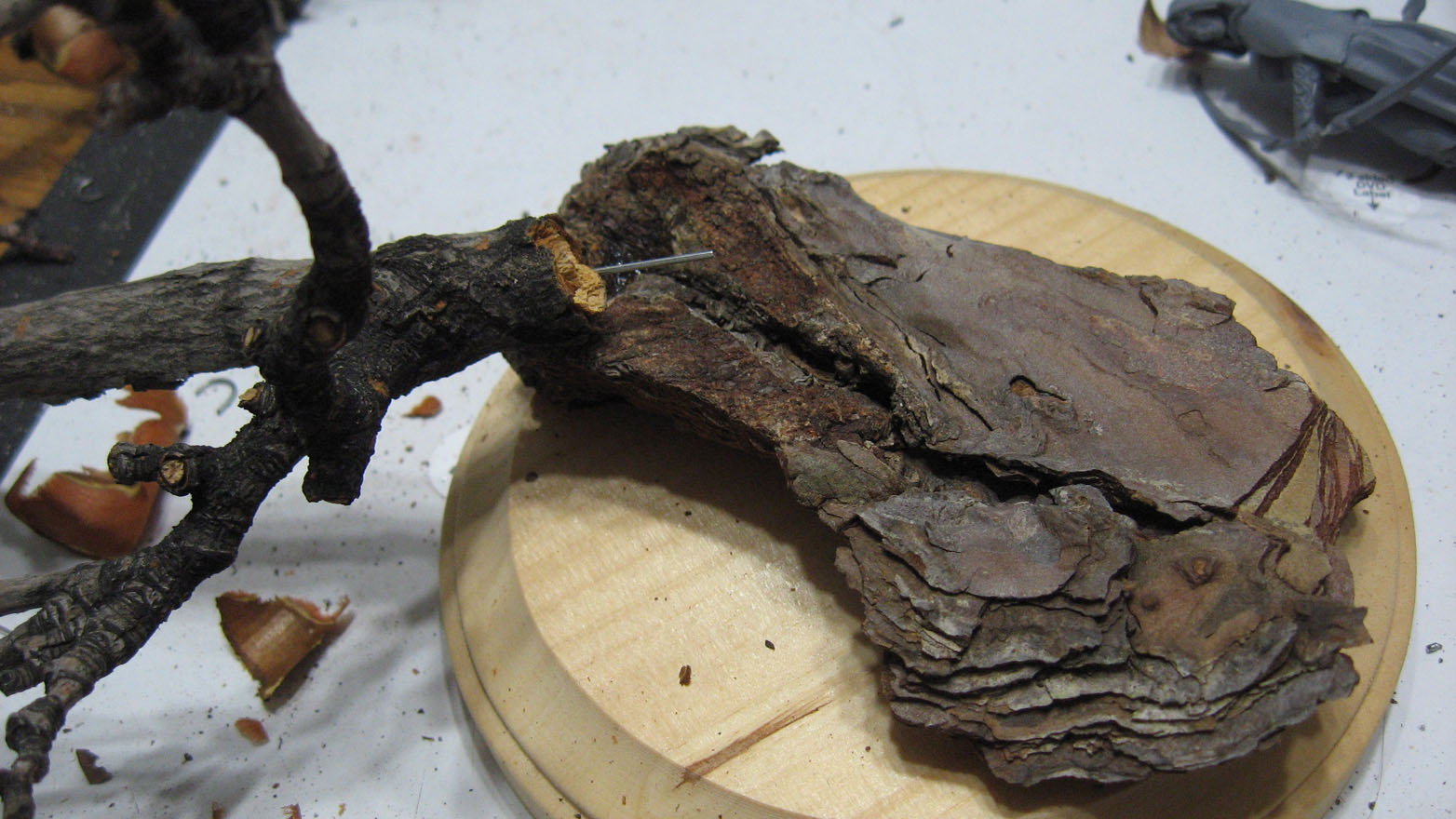