Bright Lights in the City 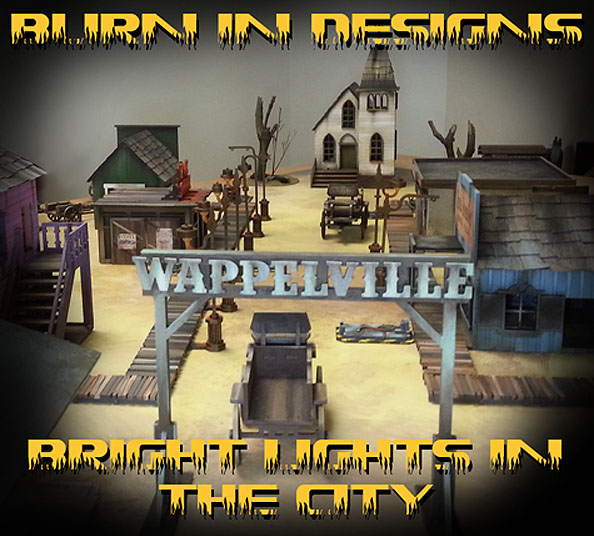 A few posts back, I showed you some images of the new boardwalk sections.  I also mentioned some house rules that we had created for them.

They were very simple.  Iy you begin and end your movement on the boardwalks, you get a plus one to your movement.  This is to represent the fact you don't have to "watch your step" as you might on the dirt road. :-)

From a visual standpoint, I was hoping that the streetlights would make the town have defined avenues, creating a "down the street" panorama similar to this!

I loved having the train station and the church at both ends of the street.  This main street is not any longer than the roads we have done in previous games, but it definitely makes it look more impressive. 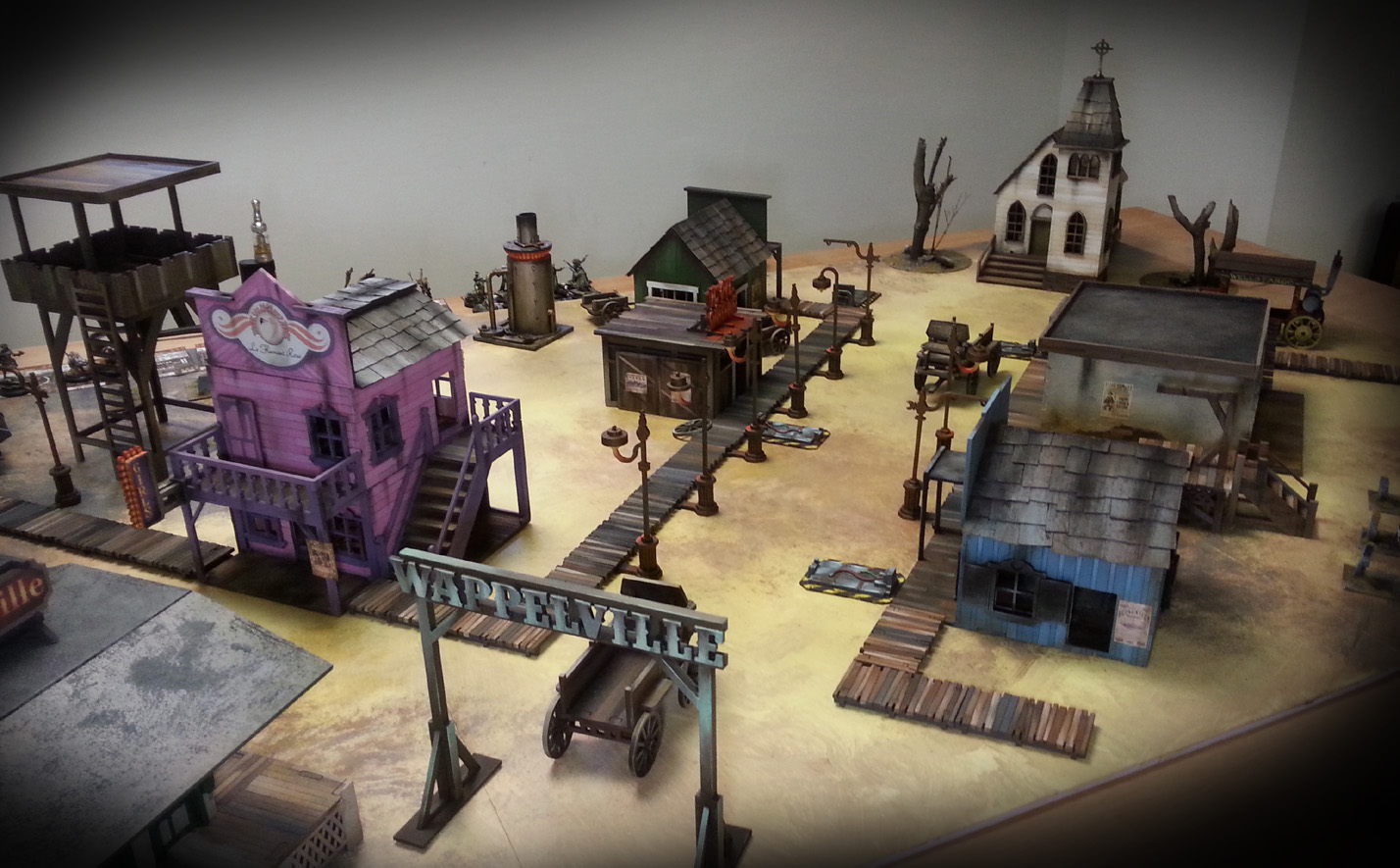 These new sections clearly doubled the overall length of boardwalk which we had to work with.  However, as I postulated in that last post, the original short sections would be absolutely crucial to make other structures such as the buildings fit in much better. 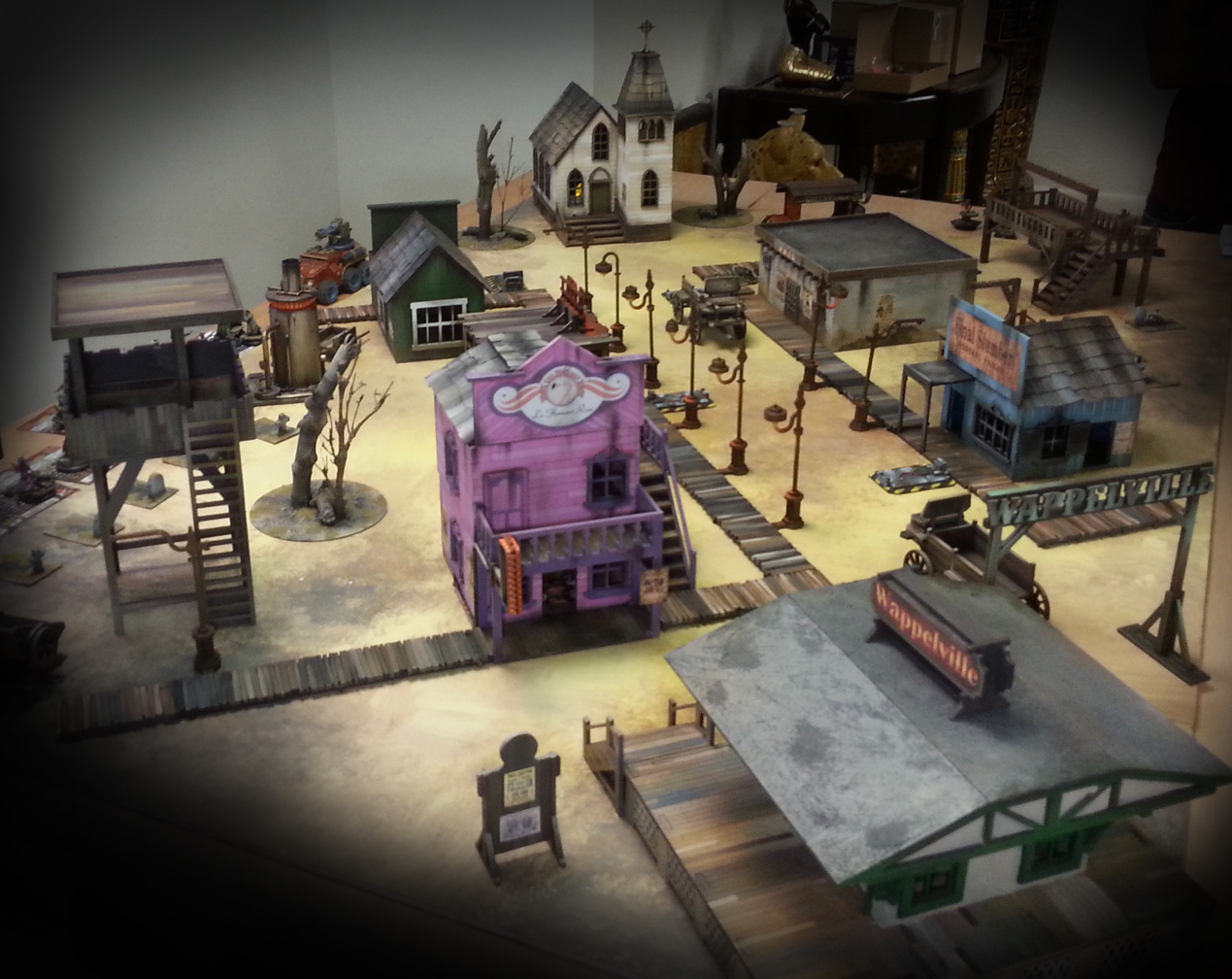 Also, the hope was that figures could utilize those posts for cover.  In the past, when a figure attempted to take advantage of the additional movement, they were completely exposed to close up and long range fire.

Thus, such a rule has not been used in any game since. 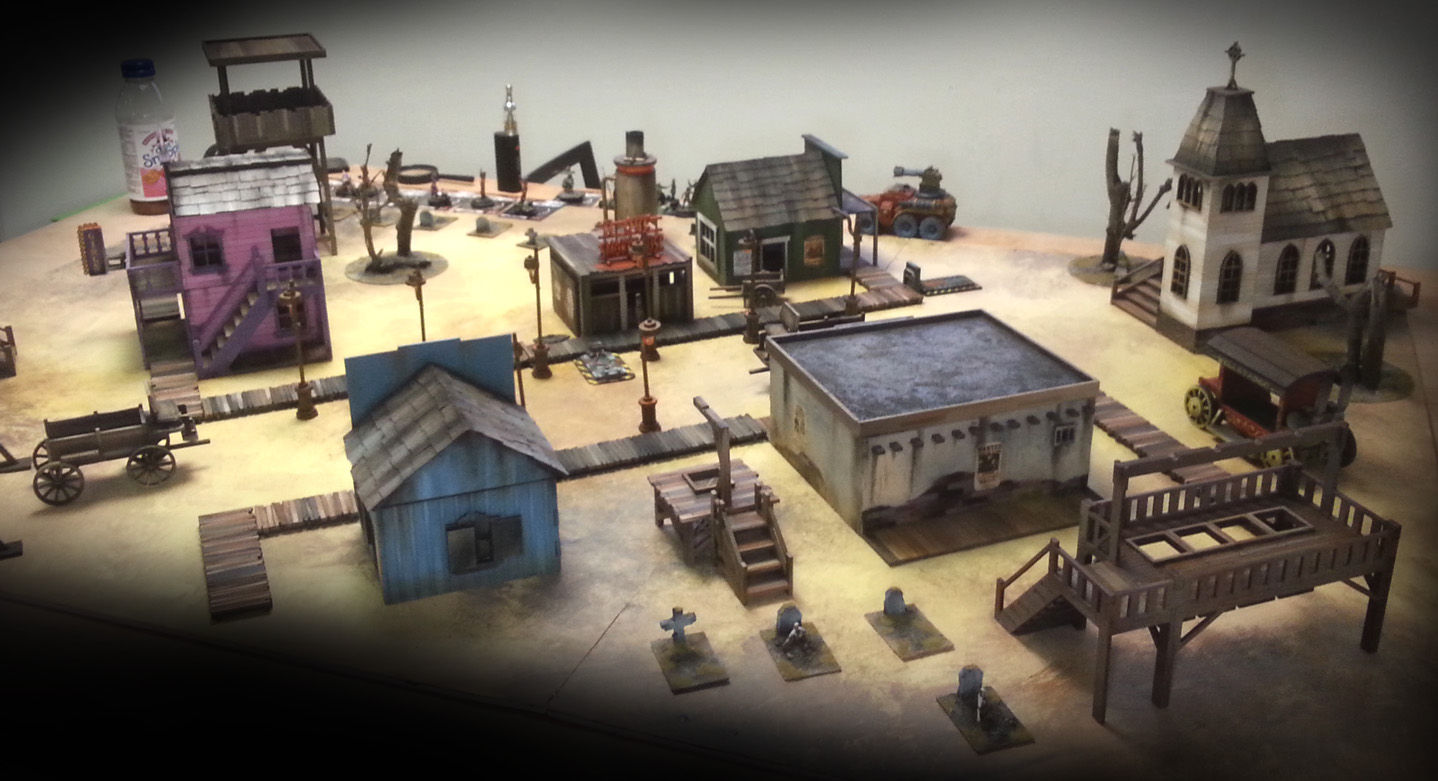 This images shows the poles themselves on the street side, as opposed to being right in front of the building.  The idea is to create more opportunities for cover, especially from buildings on the opposite side of the street.

You can also see that I try to stagger the placement of those opposing buildings, so it's almost impossible to shoot from one into the other.  It will also do a better job of blocking those "hero" shots where someone shines a laser through 3 buildings and says "I can see him".

Adding the furniture to the interiors will also help with this a great deal.  It will certainly make fighting inside the buildings WAY more interesting. 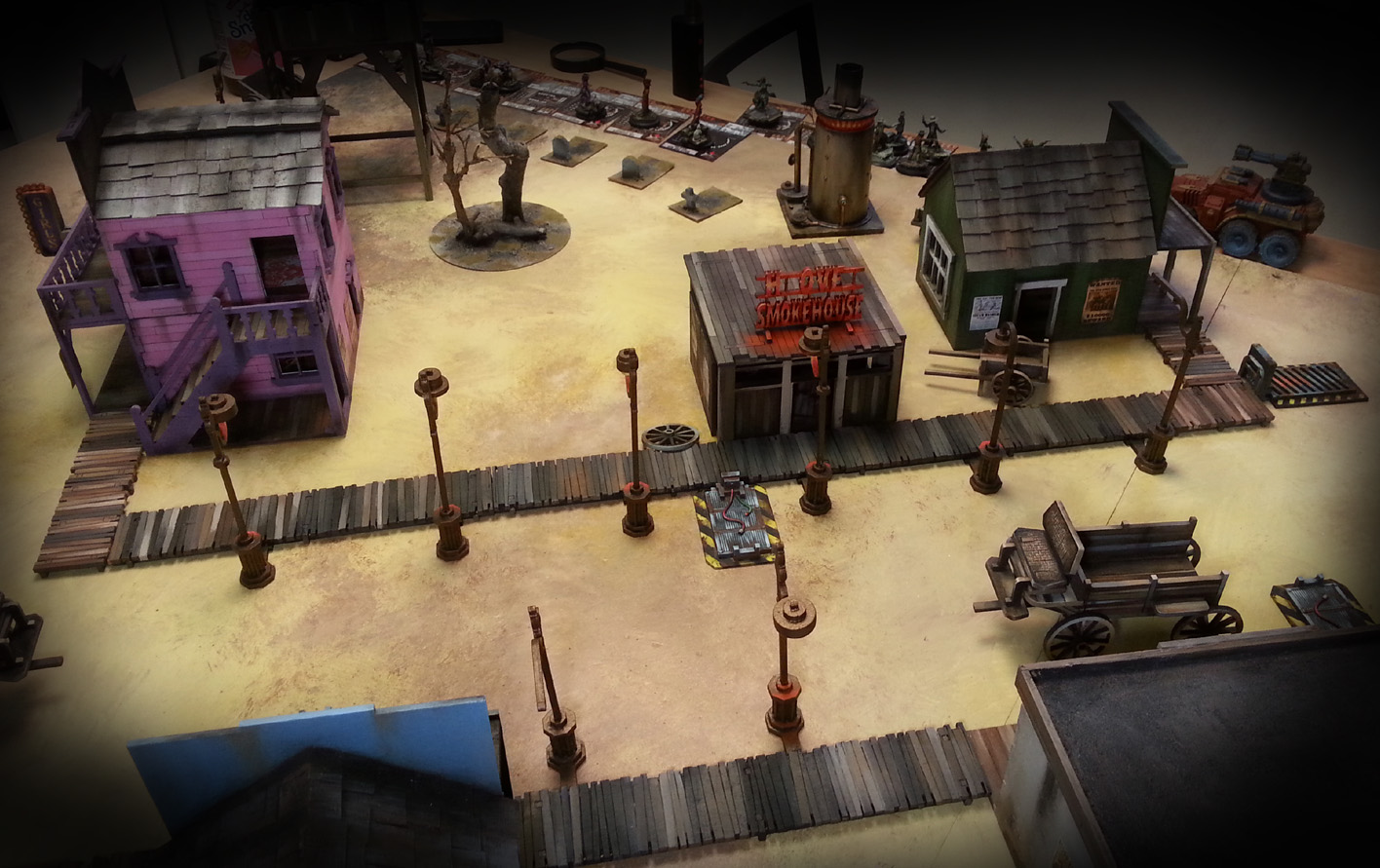 I've also got some new structures which will spice up the town a bit.  The first I will add is the Blacksmith's shop.  It has some "outdoor" elements that should be right out of a movie! 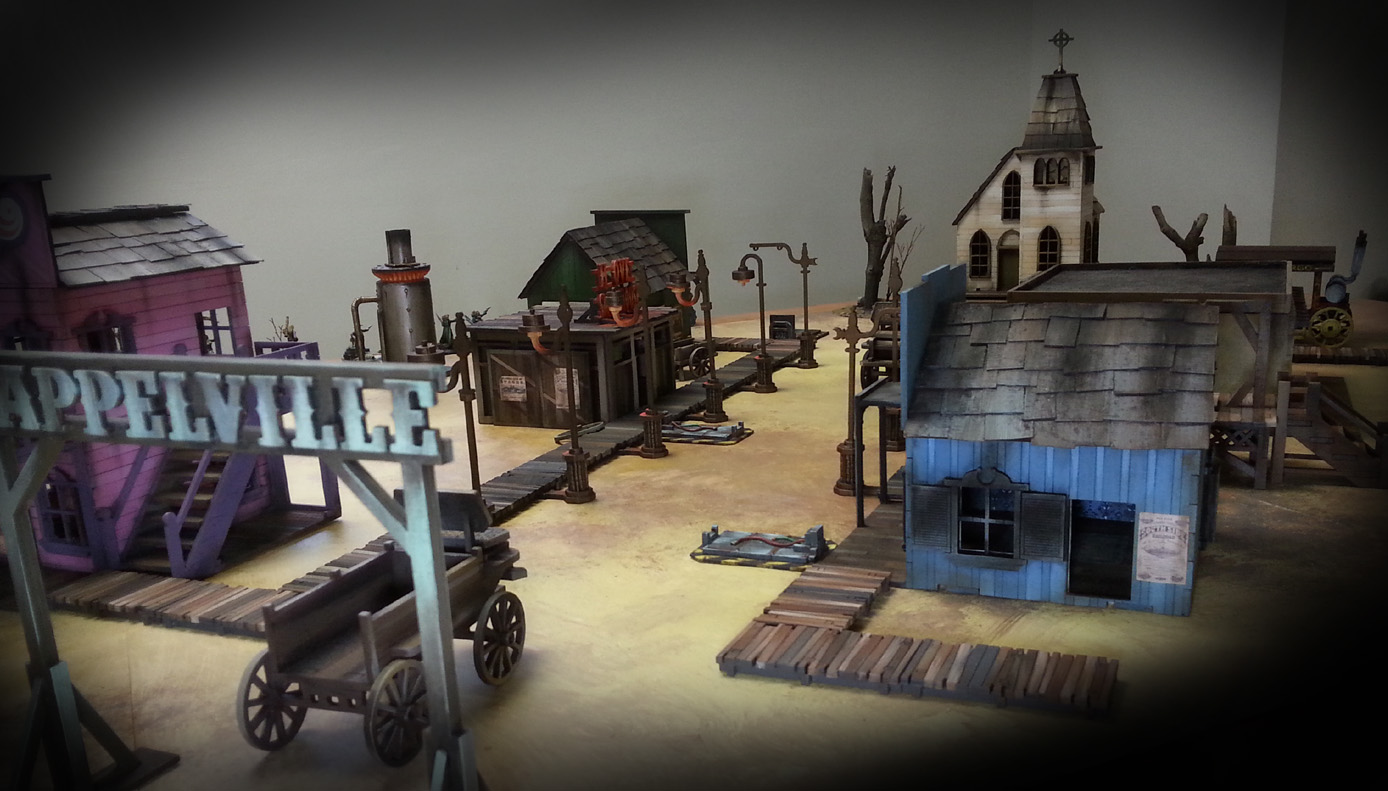 I absolutely loved this view!! 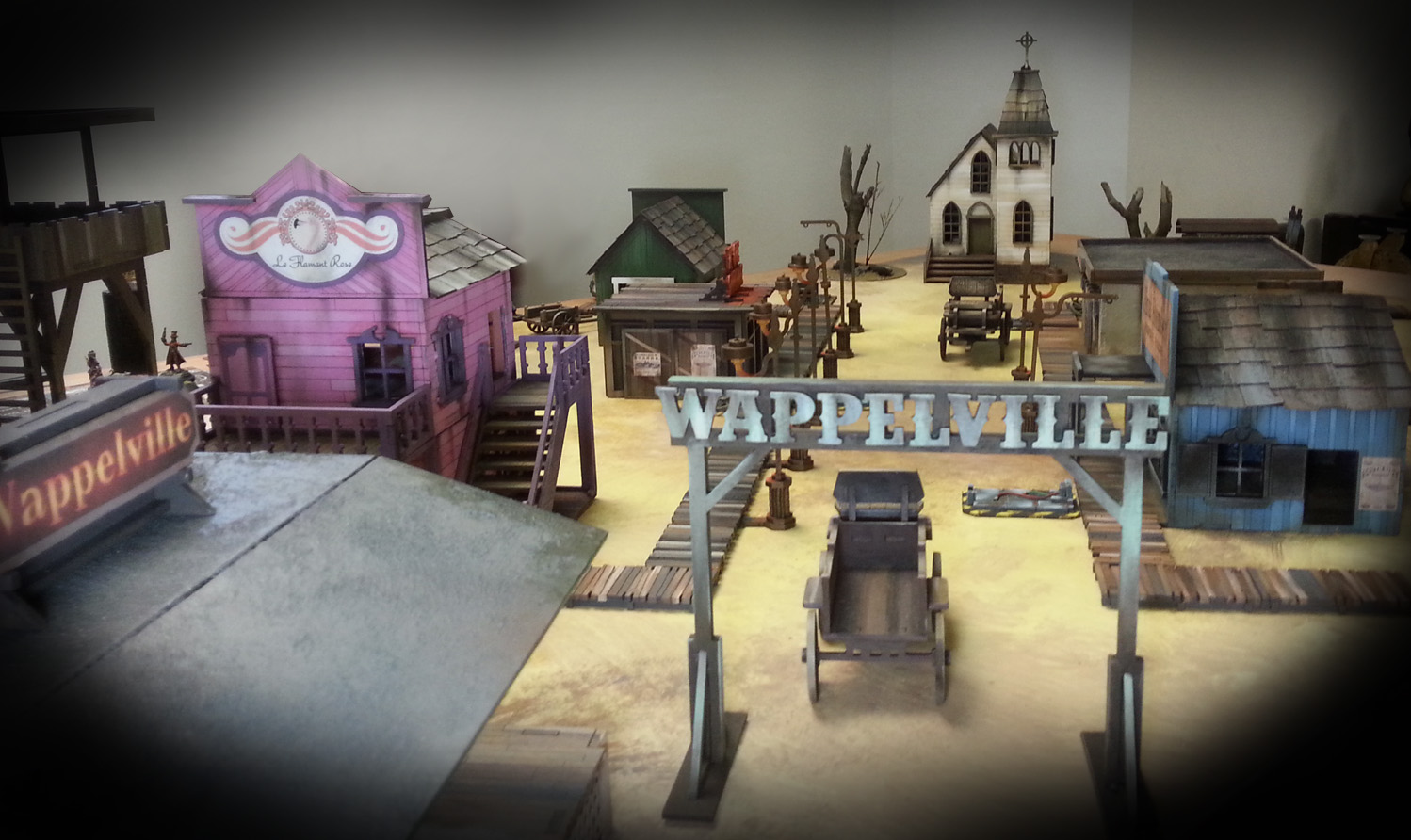 If you look closely at this image, you will see some cards and miniatures out on the table.  Coming soon, you will see Episode One: Desperate Times, Desperate Measures.  It's a fight between the dreaded Outlaws and the Holy Order of Man.  Stay tuned!!!! 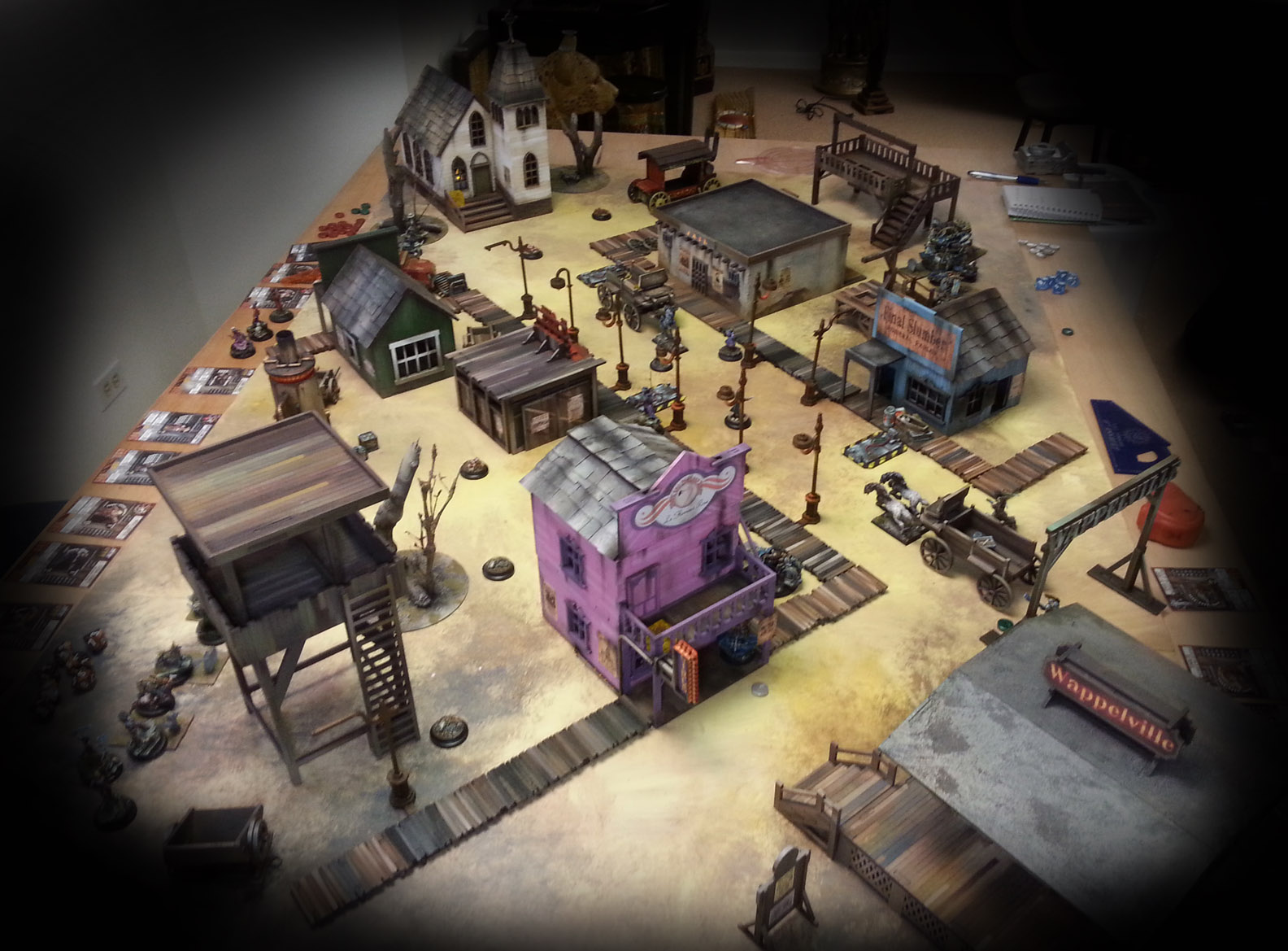 Here's another round of tests on the Foldio Studio.

These images were shot using my old setup, which I have determined should be used for large scale things such as group shots and terrain.

They were taken using my normal three light arrangement... one from above, and one from each side.

These three lights tend to eliminate the shadows cast by the other lights, depending on the pose of the figure in question.

I bring this up now, because the following set of images will demonstrate the advantages of the new Foldio studio.  The ability to raise or lower the intensity of the lights turned out to be a much bigger advantage than I anticipated.

My previous attempts at using these mottled backdrops had a tendency to burn out the middle tones of the figures.  The faded, misty backdrops did this a little less, but I wondered if the intensity pf my lights could be causing this.

I tried to move the lights further away from the figures, but that led to more shadows being created, both on the figure and on the backdrop.  You will notice here that no such shadows occurred with the Foldio.

Since I could dim the lights, I had a better chance to avoid that burnout effect on the mid tones.  Instead of moving lights around, I could tone down the brightness of the lights, and not add those shadows.

There's a variety of reasons I wanted to use these backdrops.  First, I hoped to create more of a theme with my images, but there was another practical matter.

Sometimes the figure I am trying to photograph has a great deal of the cyan, or sky blue color.  This tends to make the figure blend into the backdrop.  Many of the figures I have painted with the blue glow run into this issue to some degree.

It would be the same as if I were photographing the RJ-1027 glow on a reddish backdrop.

A side by side of two backdrops, with the one on the left having been done with the Foldio setup. 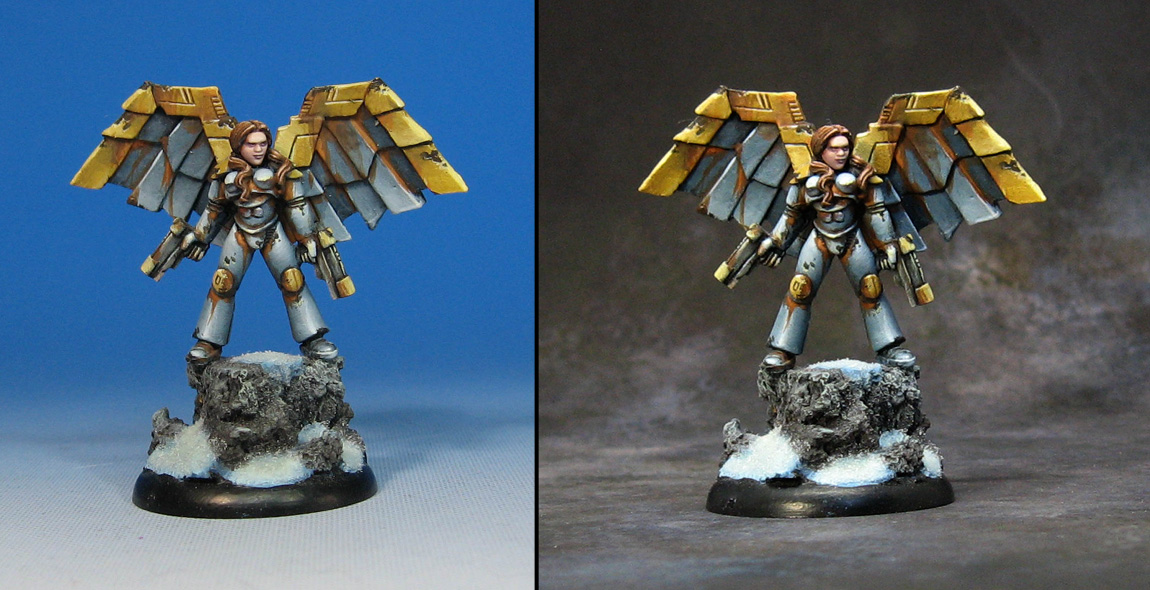