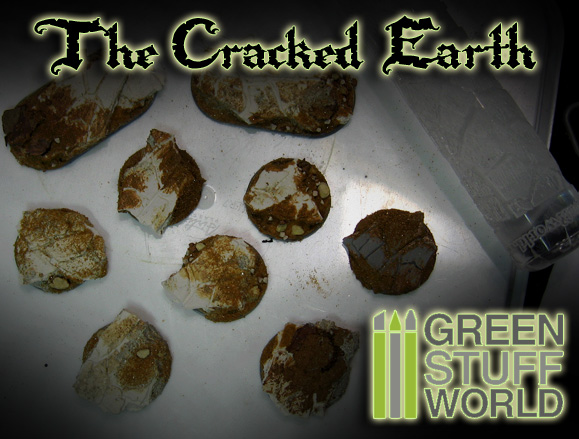 Here's a new Green Stuff World texture roller that I tested out recently.

This Cracked Earth texture could be used for a number of purposes, such as lava flows, ice, etc.  Since I was in need of some desert style bases for my new Bolt Action Italian army, I thought I would give it a try!

I only had a few small pieces of sculpey to roll out for this test, so I don't have large pieces of rolled out texture to show you.  However, I must note that unlike my usual approach with these rollers, I intentionally made this sheet thicker and more uneven.

I thought doing so would make this more like cracked, wasted earth, as opposed to a flatter, more even icy appearance.  You can also see that when I broke this uneven sculpey, many interesting formations were created along the broken edges. 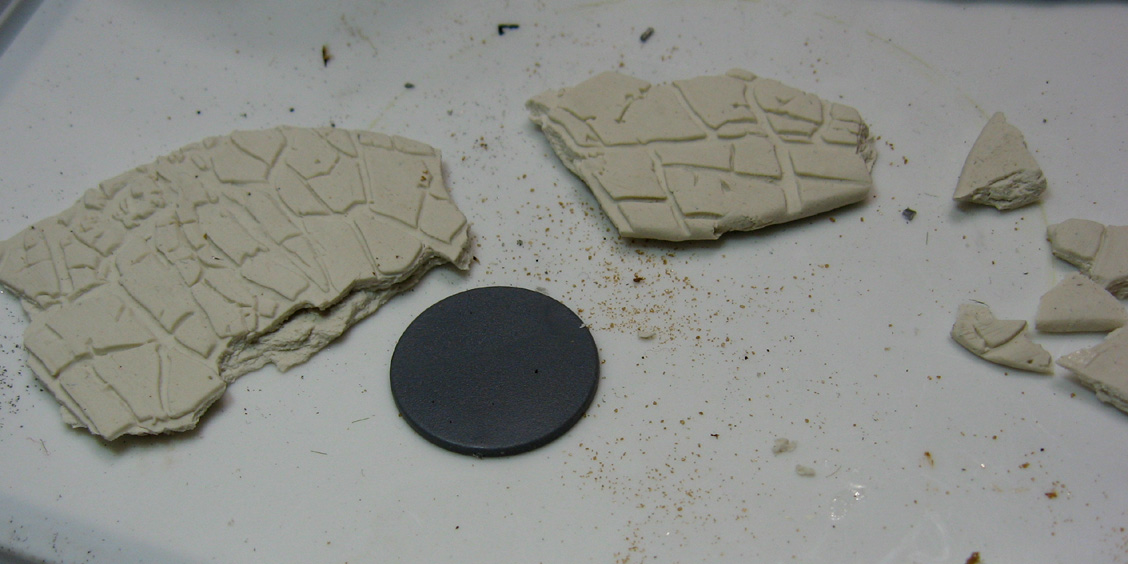 This Cracked Earth texture is very easy to break into the shapes that you need, as all kinds of natural 'fault lines' are provided for you. 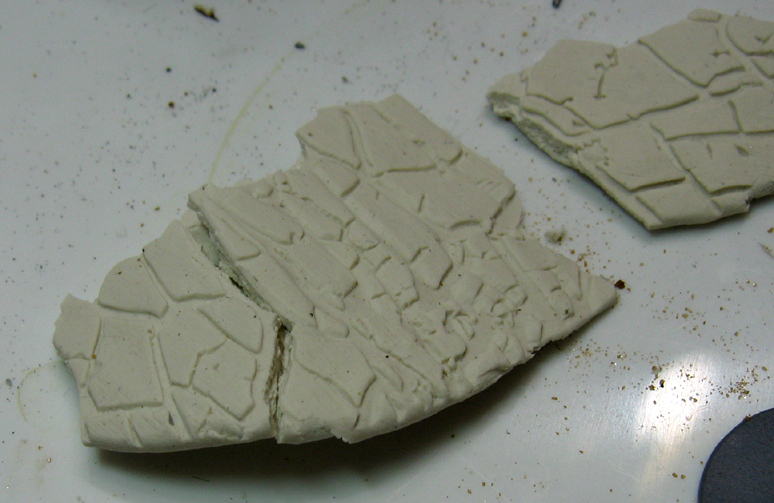 In this case, I combined a few pieces together.  You can see on the right hand side of the base some really fun broken sculpey texture... added bonus! 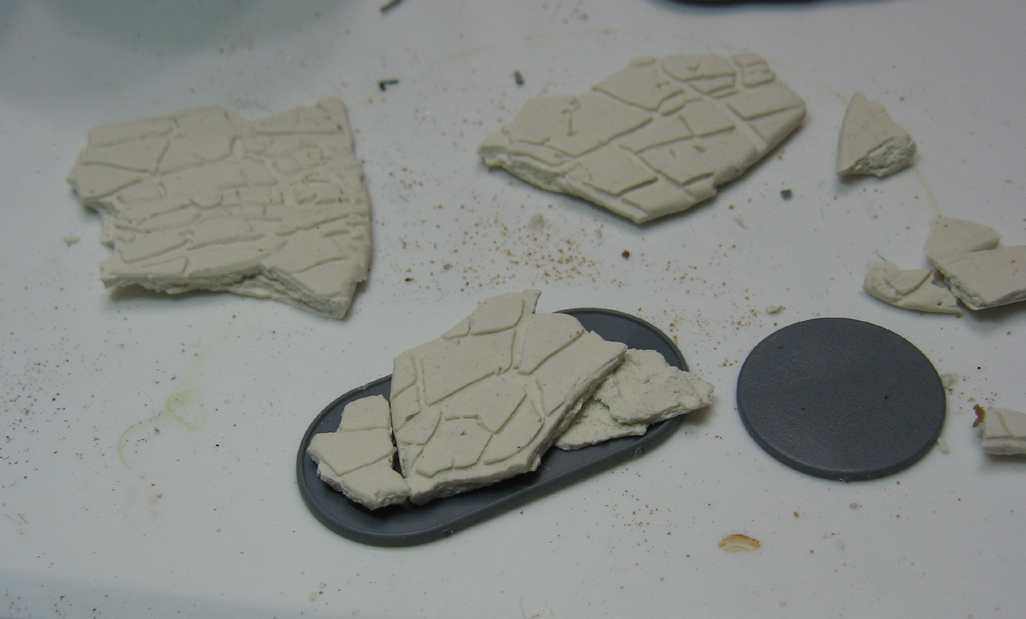 As I usually do when applying bark pieces to a base, I put down some of the Vallejo paste first, which serves as mortar to help keep that piece in position. 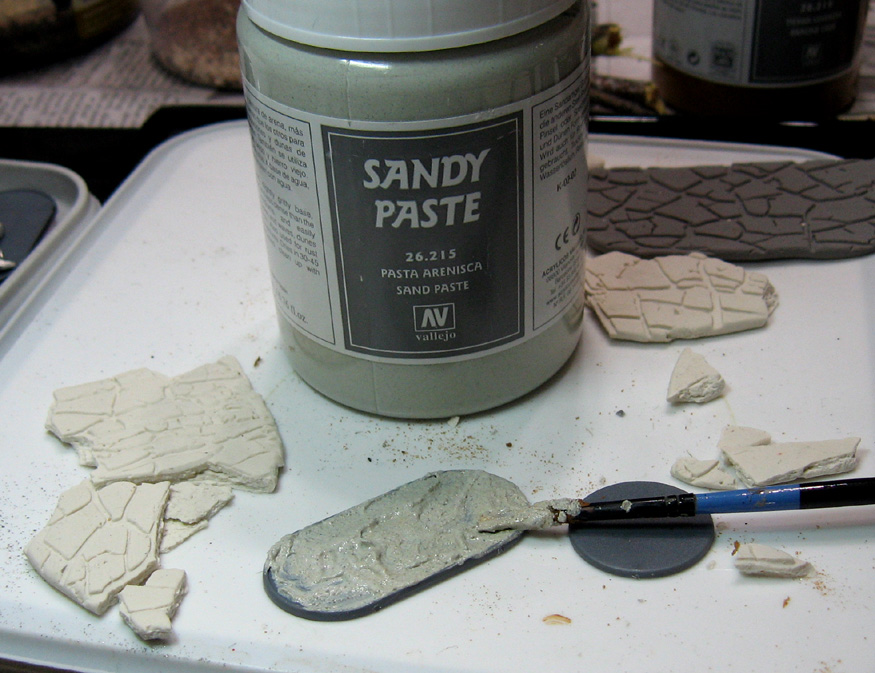 A few dots of super glue also help hold in in place. 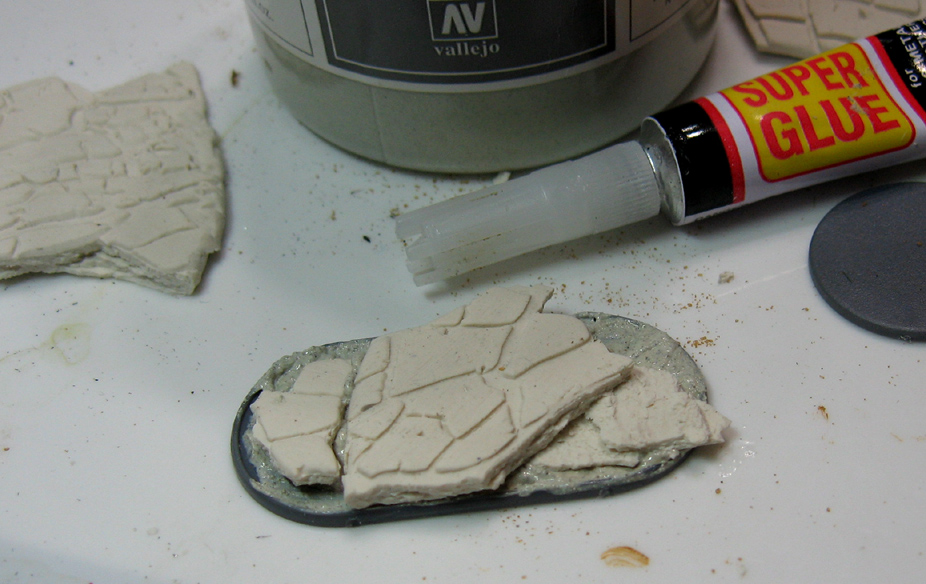 More Sandy paste is brushed around the edges, and even on the surface.  This creates a more random, sandy look once it is painted. 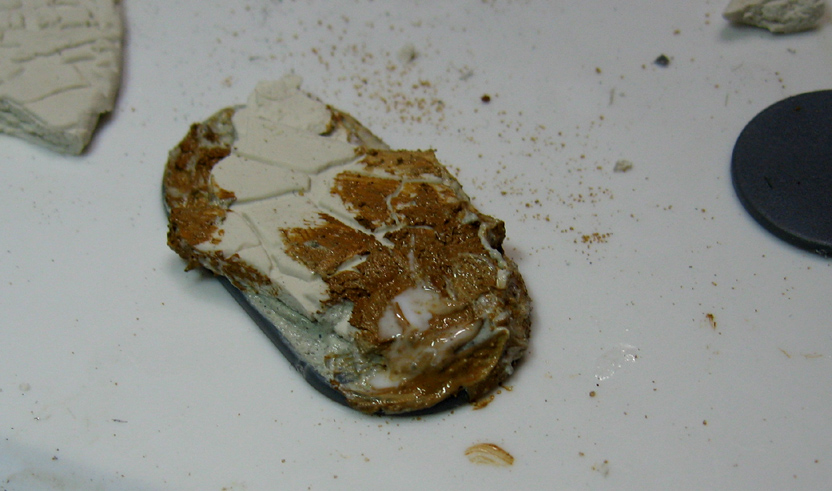 To carry the experiment further, I took some slices of tree bark to create some additional cracked earth textures.  This was also to give the miniature a better angle when it was placed on the base.

A few small chips of bark are applied, which I shaved down with an exacto knife.

Once again, sand was added over the top and some rocks to complete the base.

Moving along nicely!  Unlike the other textures you have seen me use, such as the Runic Temple, Celtic and Mosaic tile, I used the standard white sculpey.  I did this so that it would be easier to break the pieces into these random shapes.

The gray Extra Firm sculpey would break into very clean, crip lines... which is great for the other bases, but not these natural formations! 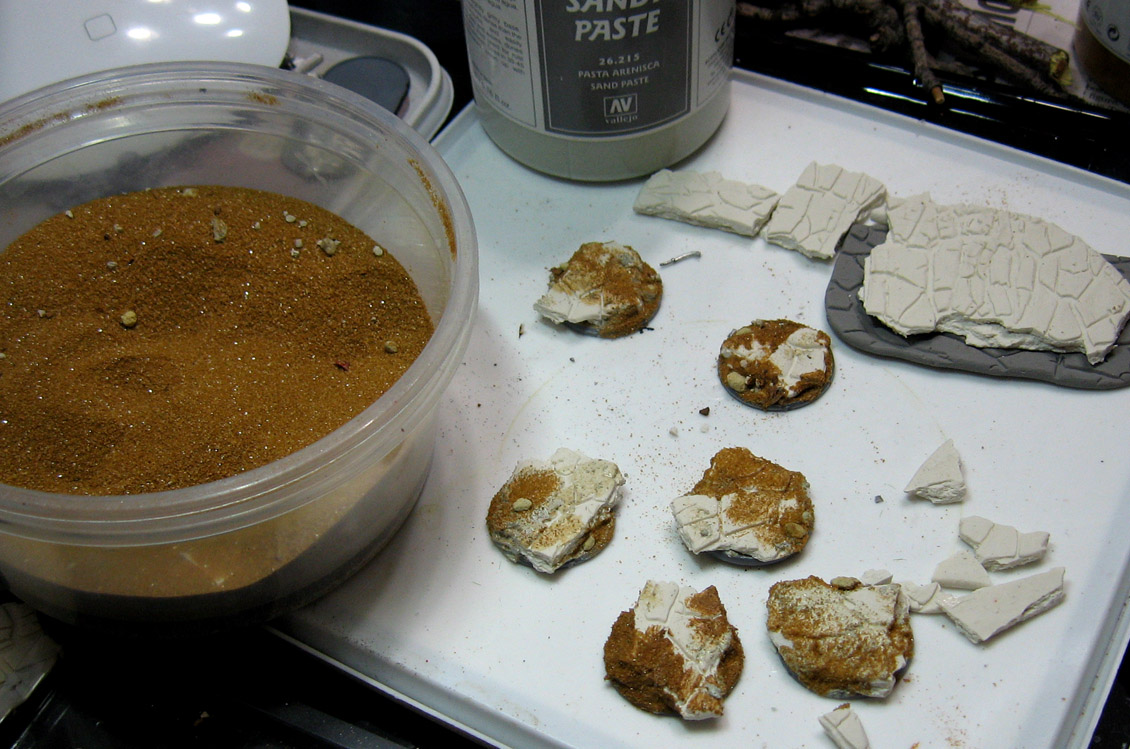 These don't look like very much right now, but a few quick layers of paint will really show off the look which I was after. 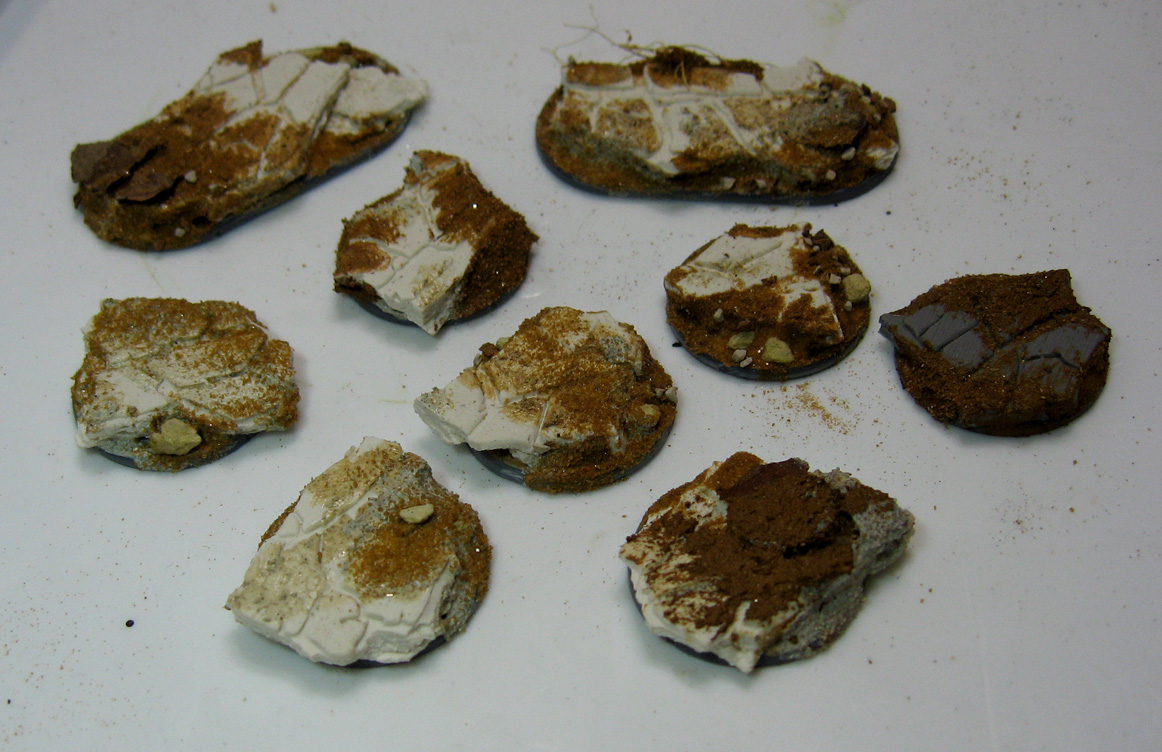 Stay tuned for the conclusion, and check out some of the other posts in the Green Stuff World section of the blog! 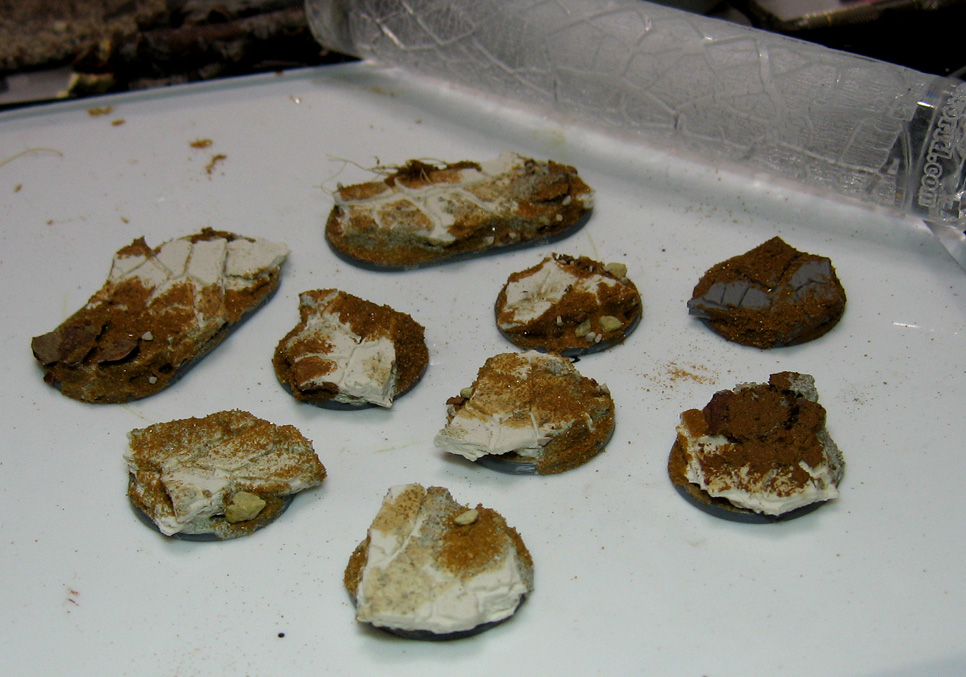