Cold Ones on the Run! 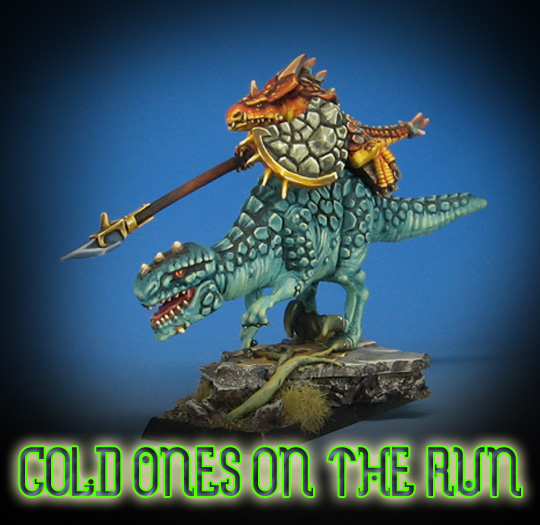 It's been a very long time since these guys have been the focus of the blog!  In fact, the last images of these Cold One riders were probably posted nearly five years ago.  That's when the blog first began!

I will be posting more of the Lizardmen over the next few months, as the five year anniversary of the blog approaches.  Yes, by then it will have nearly 3600 posts, and close to 4 million views.  Yikes!!

The unit of Cold Ones was entered in my very first Games Day back in 2007.  They won a Silver Demon for Fantasy regiment, which was very cool.  You can tell that these are older, given the metal Saurus sitting on the back of the old timey Cold One.

I was still learning how to do the basing for units, making something interesting that would still allow them to rank up and fit on their movement trays.

They didn't do very well in my games unfortunately.  For whatever reason, I would fail nearly every stupidity test.  Yes indeed... roll 3D6 and pick the 2 lowest, and I could not manage a "9" or less!  Ouch.

Their final game saw them go stupid for the final 5 turns, leaving them stranded in a forest.  My opponent didn't even bother to do anything to them, since they did quite well at taking themselves out of the game.

Posted by wappellious at 11:39 AM No comments: