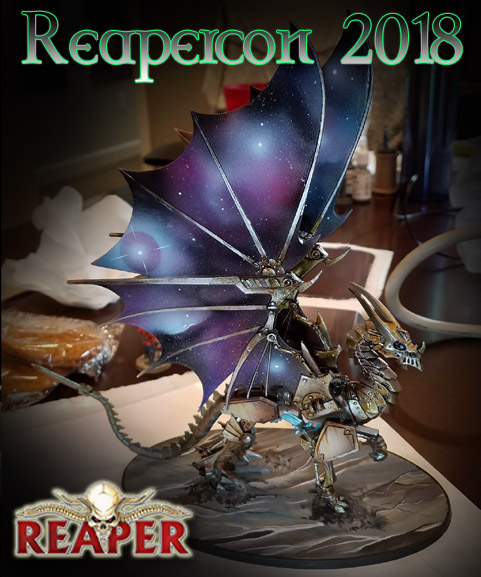 Picking up where we left off from Episode 1 of the ReaperCon 2018 review, where I make a quick mask using a torn paper towel.  The edge was just right for creating the highlighted edge of the dust clouds.

These were darkened a bit at the edges with a shot of dark blue Badger Airbrush Ghost Tint.  It is one of my favorite uses for them. 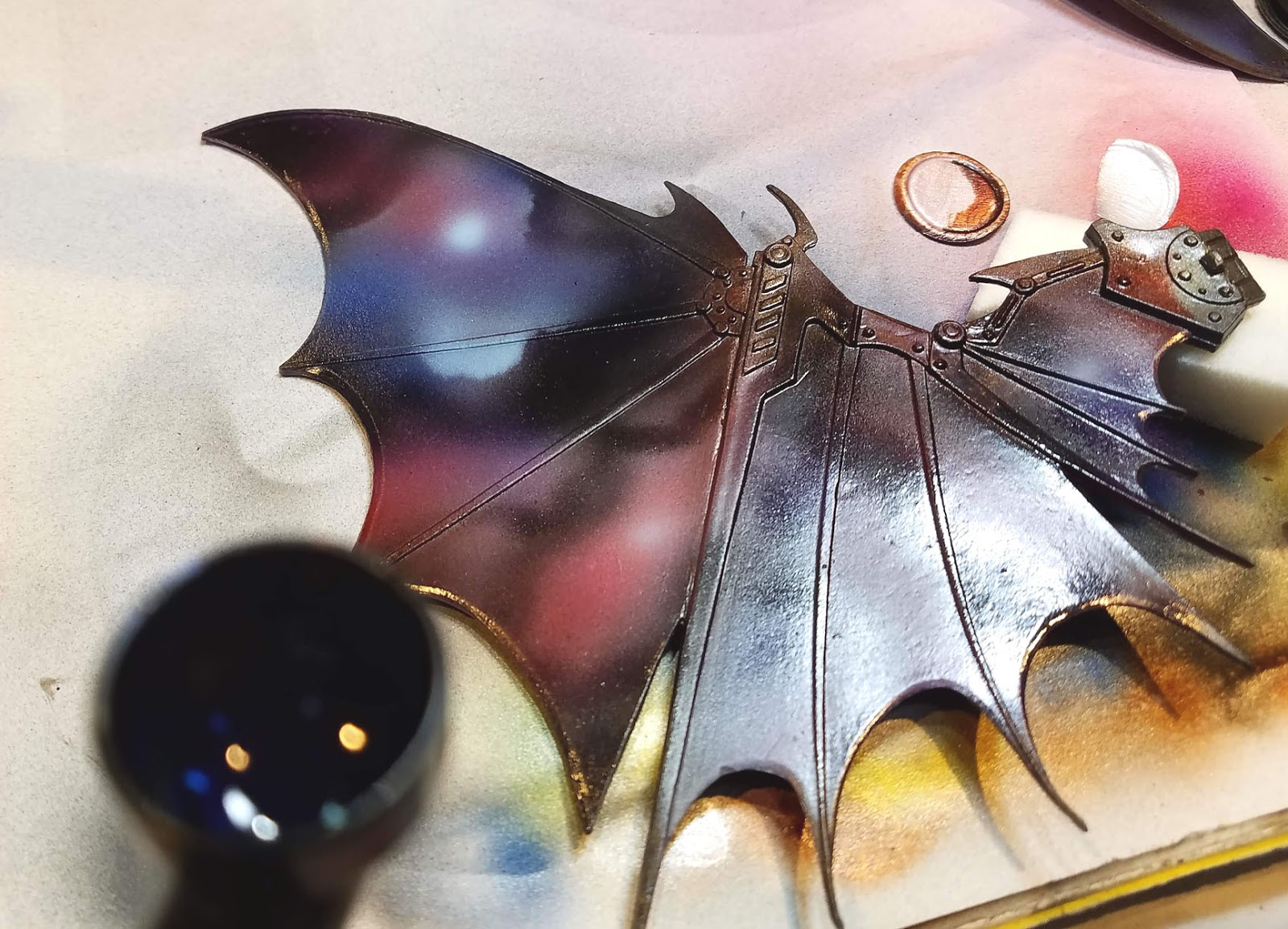 To make the initial "glow" for the brighter stars, I mixed a touch of blue Ghost Tint with white primer.  I placed a few of these on each wing.  It is important not to have too many. 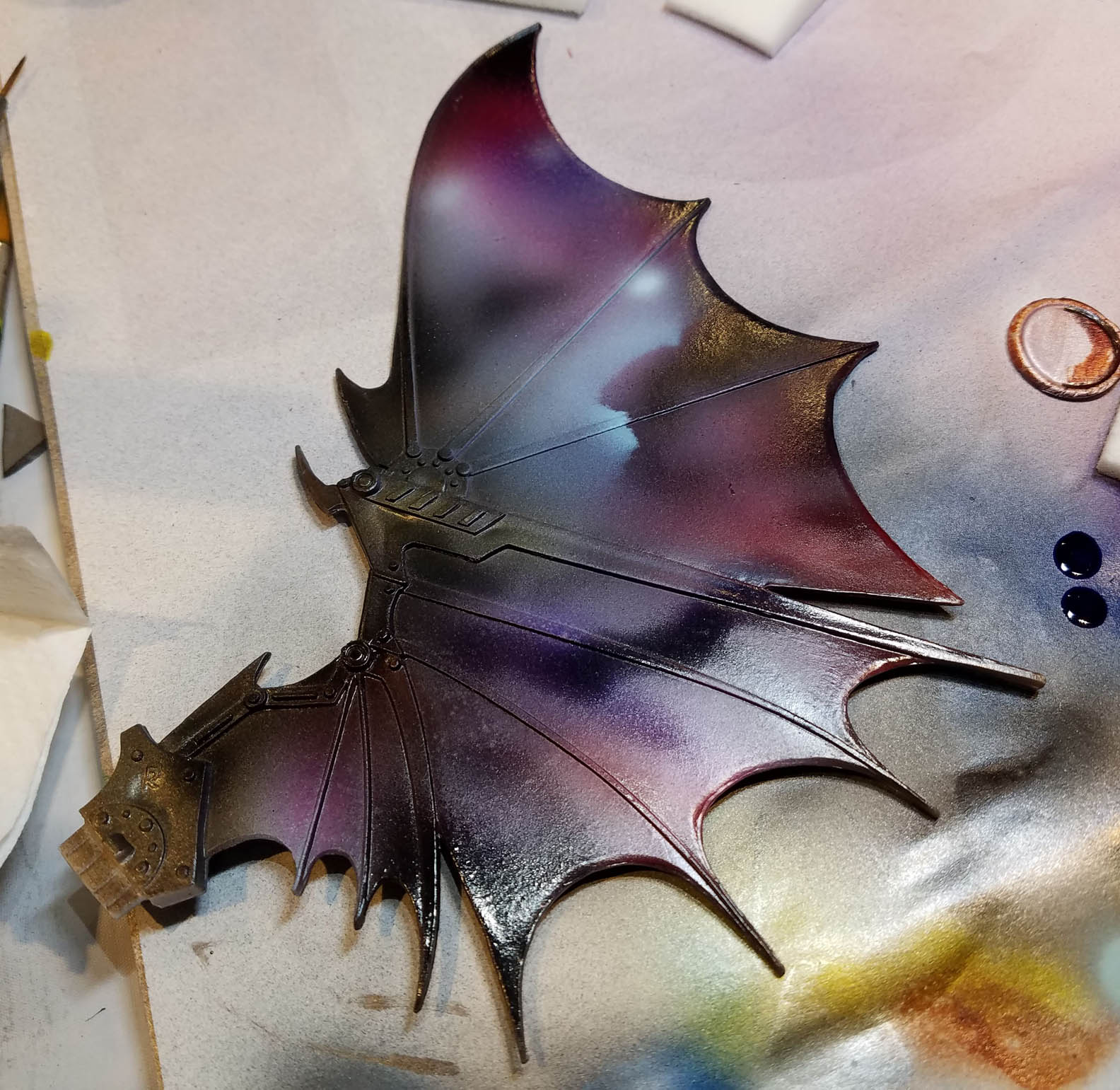 I placed a dime (any kind of coin would do) over the star, which created a mask.  After spraying a blue Ghost Tint/white primer mix over it, you can see the nice circle left behind.

Once that is set, I painted in a few points of light with white primer.  I also added in a few "spectral lines" emanating from the brightest star on each wing.

The smallest stars were made by spattering a thinned down mix of blue and white primer. 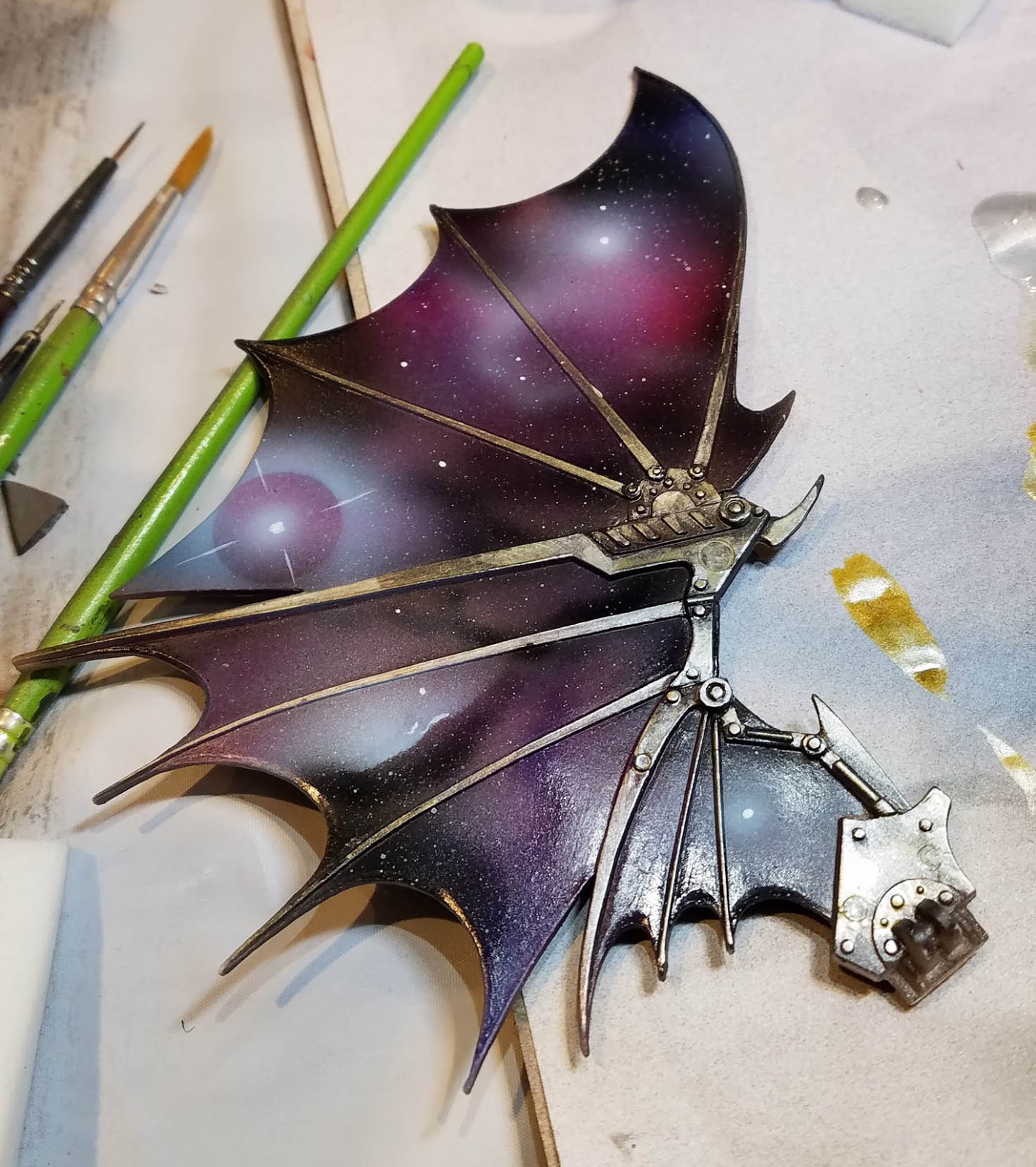 Once all the spacescape elements were complete, I brushed in the metal parts of the wing, and tried to shade/weather them to look like the body of the dragon. 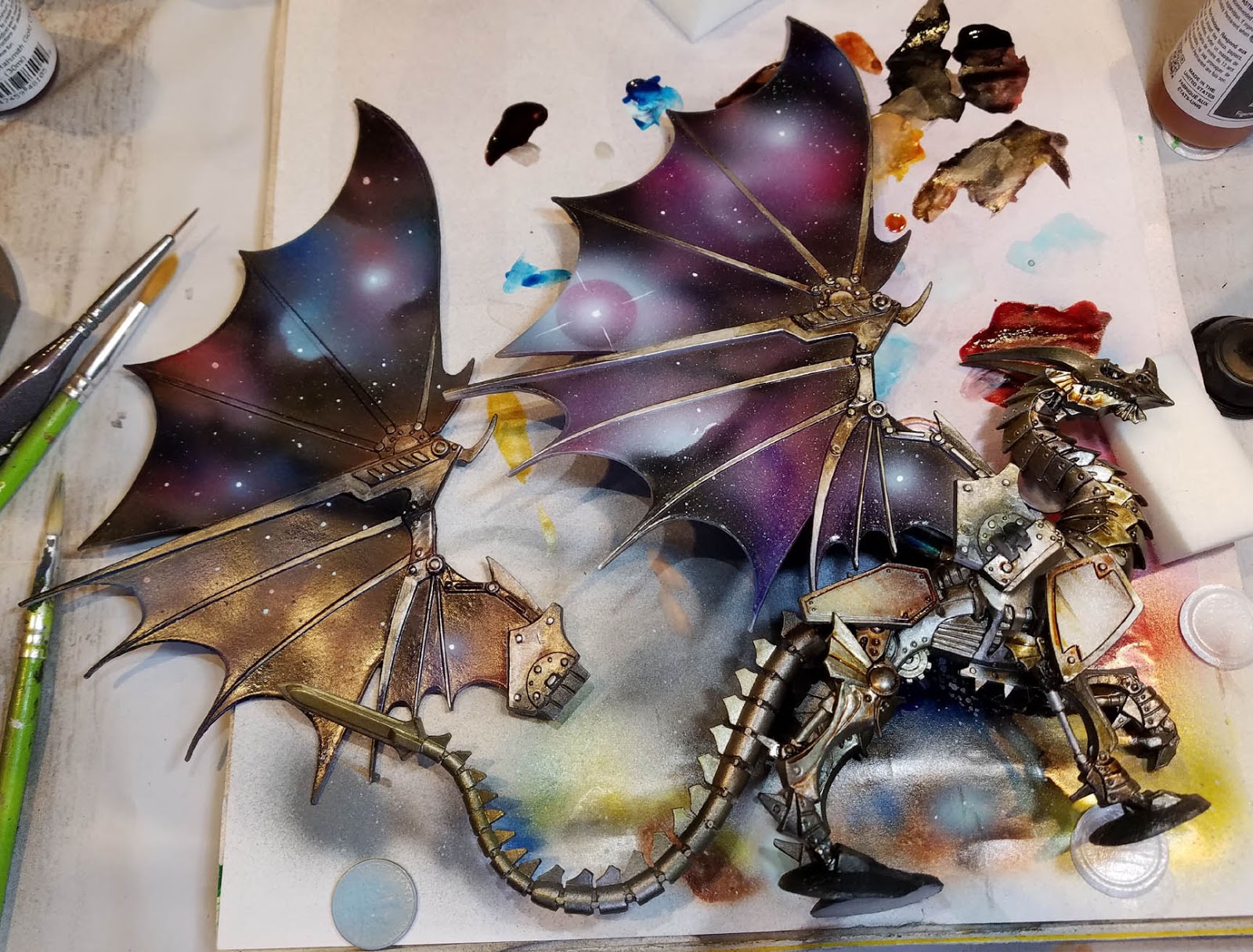 At this point, I still didn't have a base for it, so I continued to weather the body of the dragon, using primarily Ghost Tints.  I made sure to include a touch of the Metal primer here and there, so that the metallic effect would not be lost. 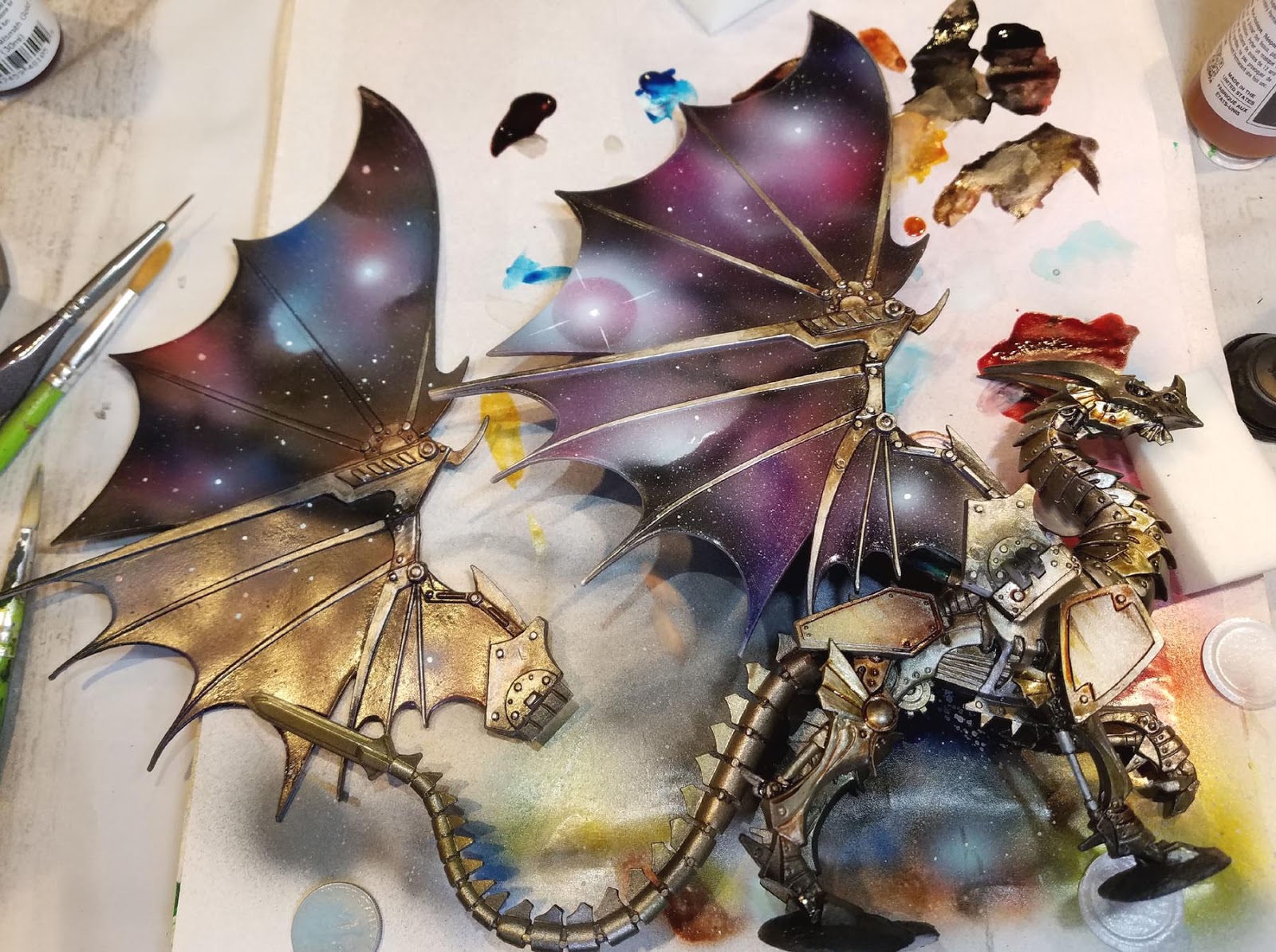 You can get a better view here of what the wings looked like without the metals.  Also, you can see how rich and dark the Ghost Tints are.  It is somewhat similar to using the Reaper Clear and Liner paints. 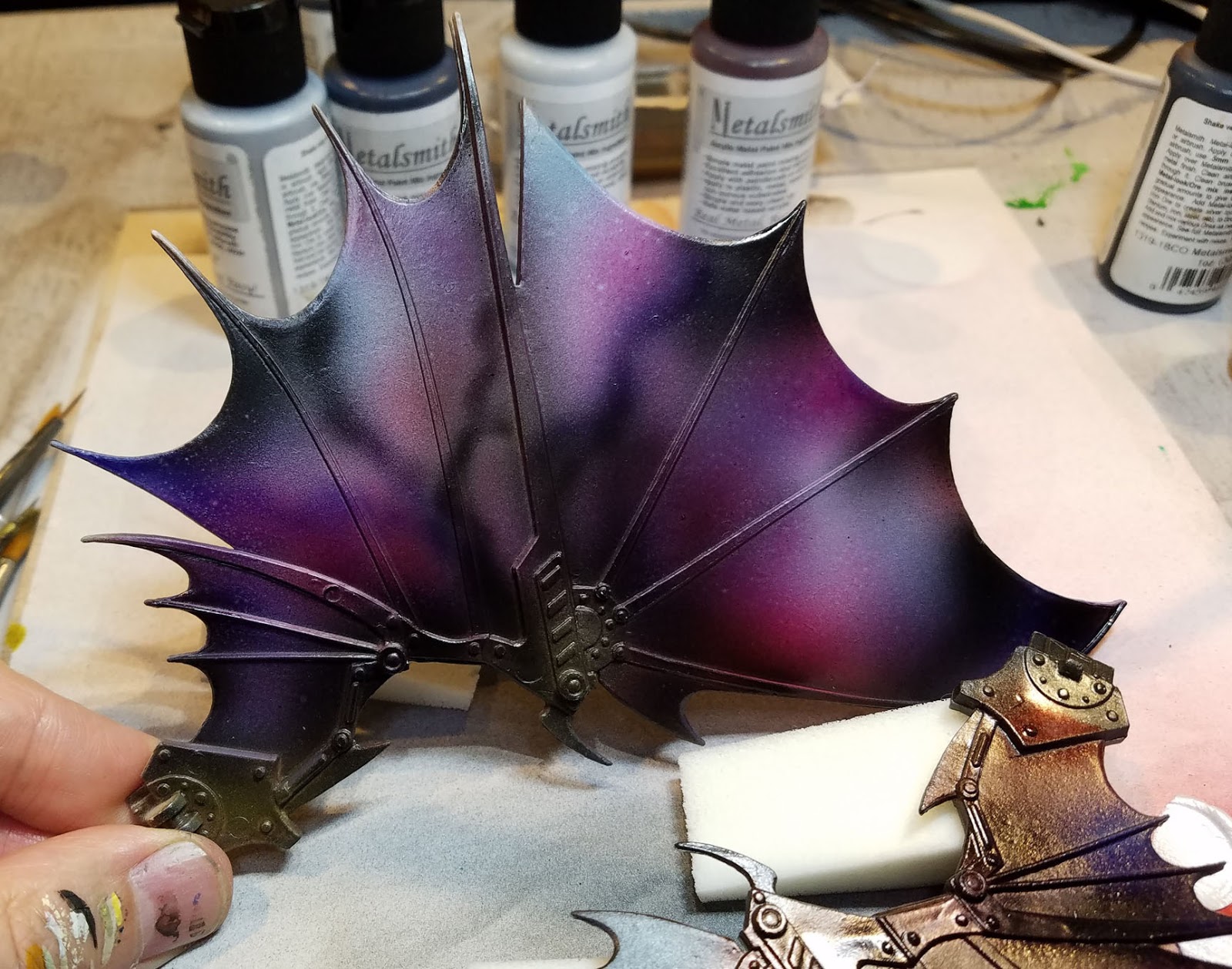 On this side of the wing, I mixed the Magenta Ghost tint with white primer, and masked off some of the dust clouds. 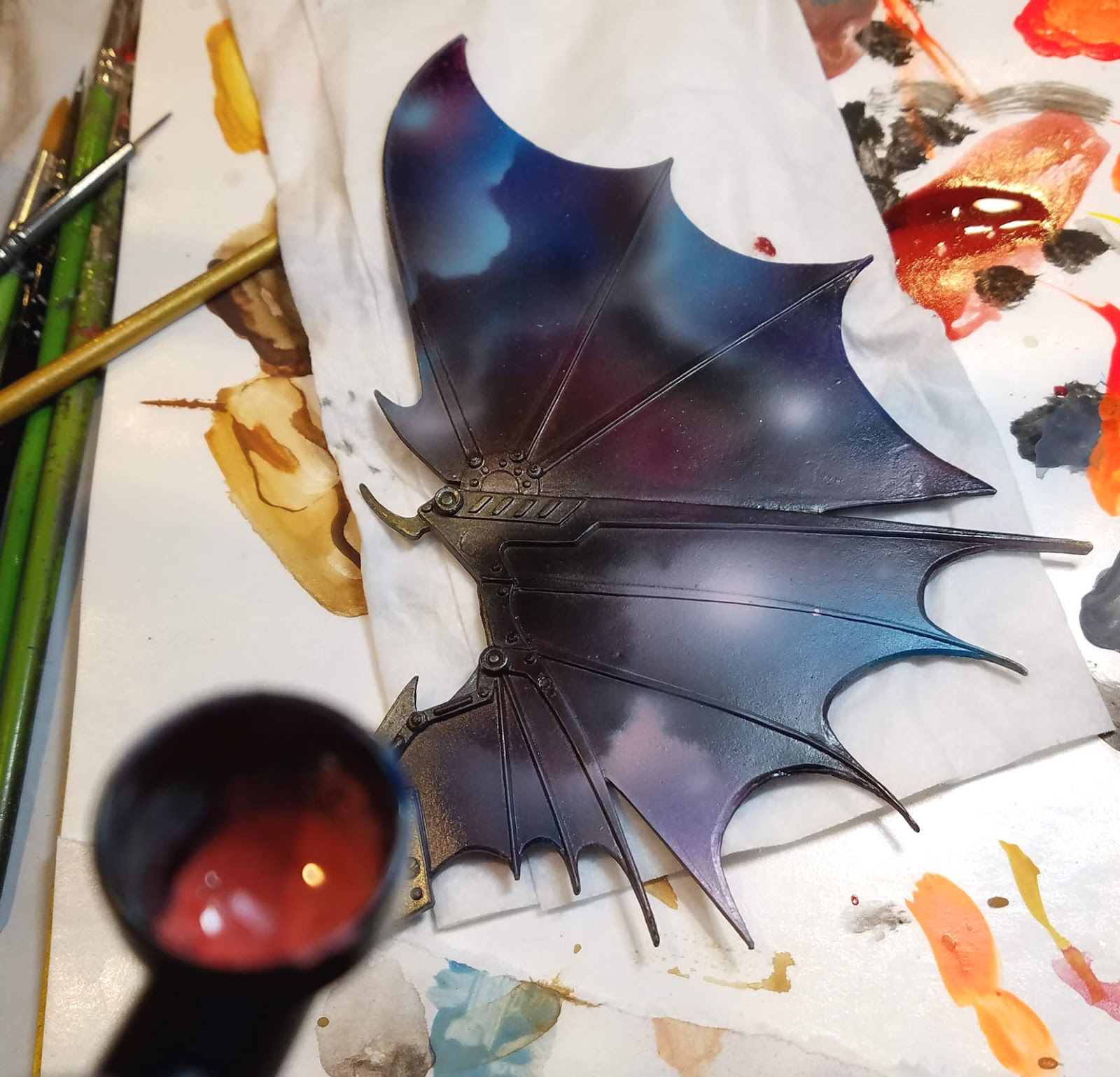 The magenta tint was a nice change from the brighter blue on the other end of the wing.  I used a larger coin for the circular mask on this 'main' star. 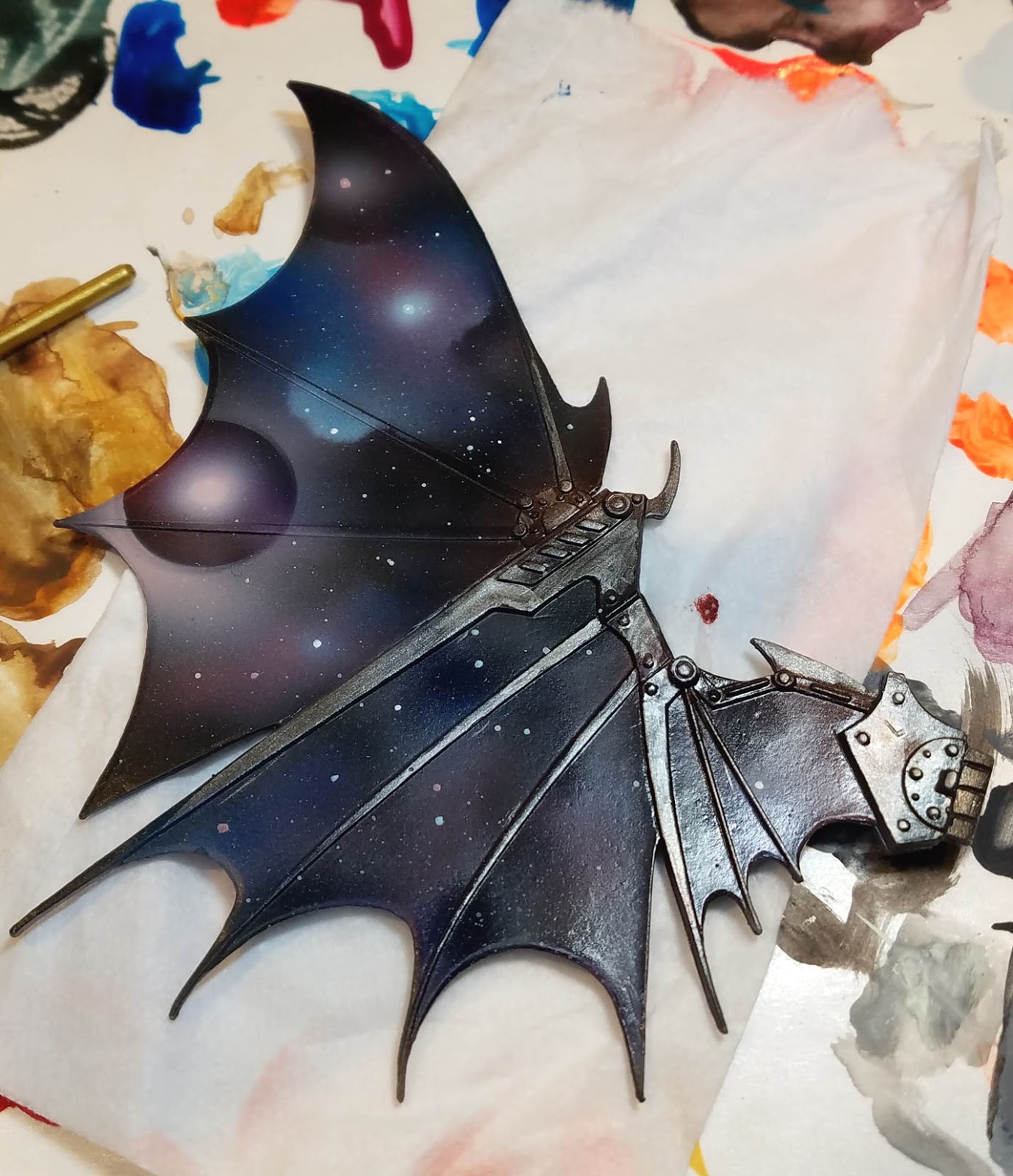 I selected a few brighter stars to emphasize with the painted dots of white before spattering them with the finer, thinned down primer. 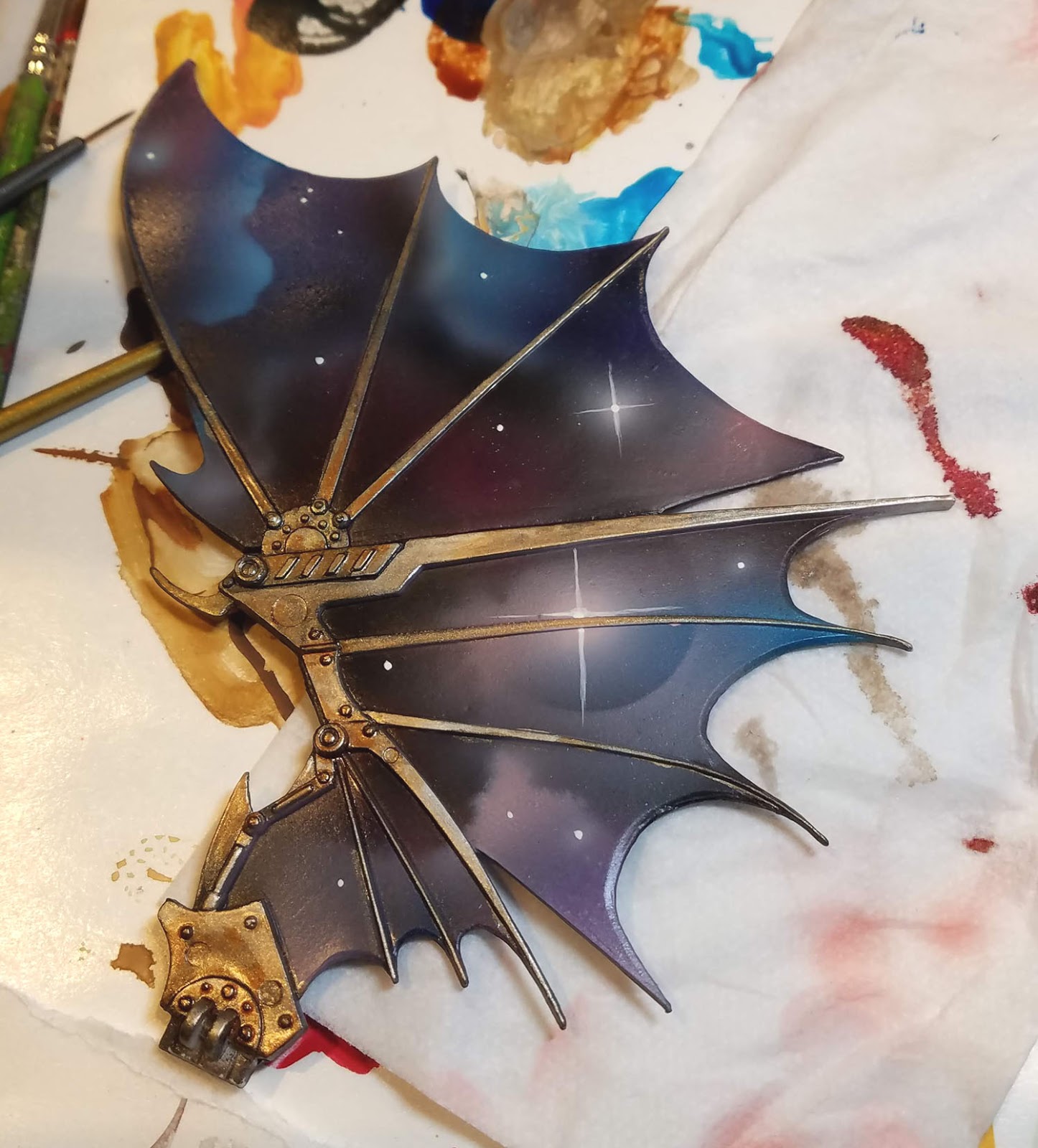 As I mentioned before, I did not have a base for this when I began painting it.  This is when I discovered the new series of large plastic bases from Reaper!  I was amazed at how many sizes there were, and shapes.  These will not only be helpful on the ever increasing number of large creatures which I need to base... they will also work for my Bolt Action heavy artillery teams. 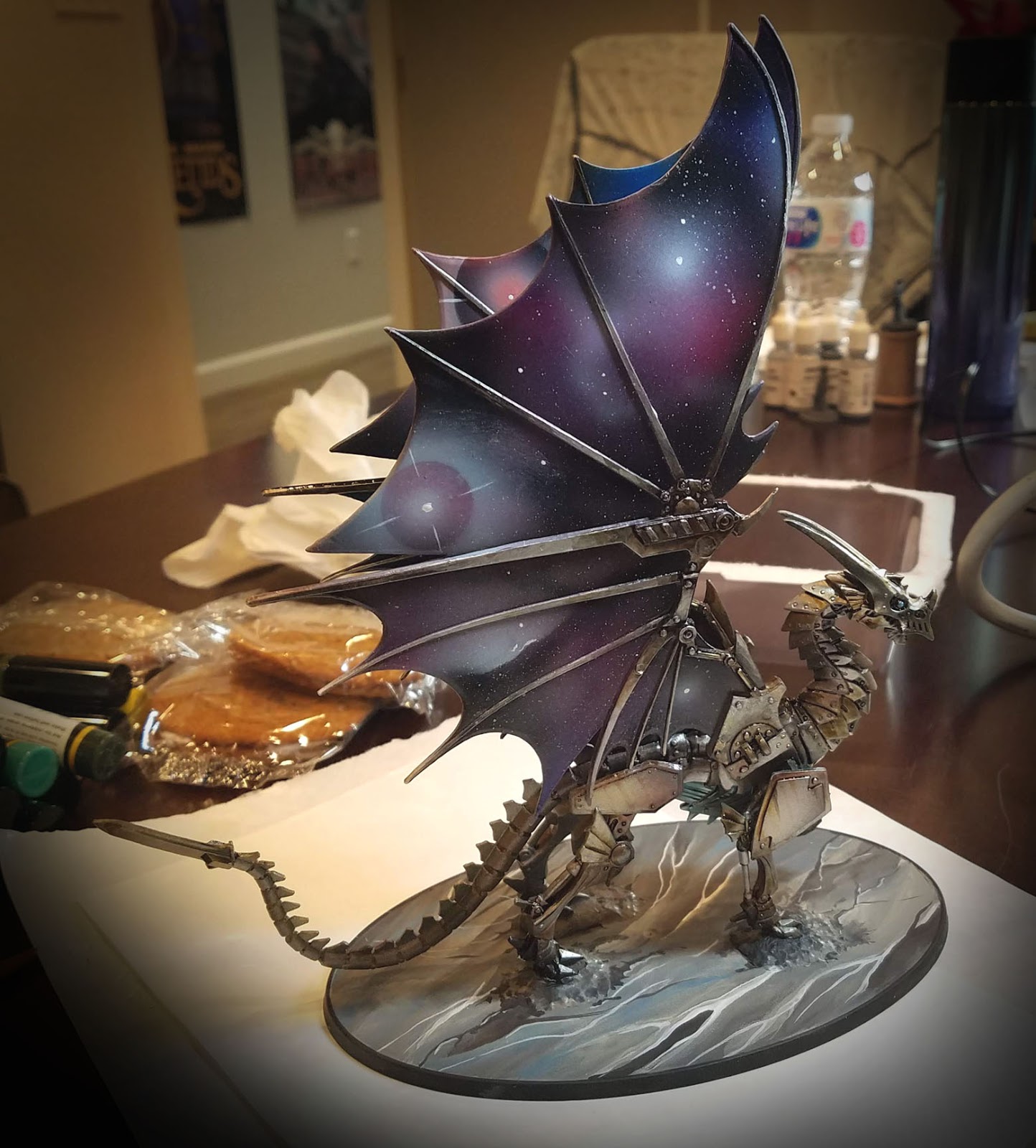 I am sorry that I don't have fancier images of this for you (I took these not long before we left the Reaper factory on Wednesday) but I will be doing another one of these under more controlled circumstances here at home.

I can take more step by step images, since I don't have to worry about an audience!

Stay tuned for that, and for the next episode of ReaperCon review! 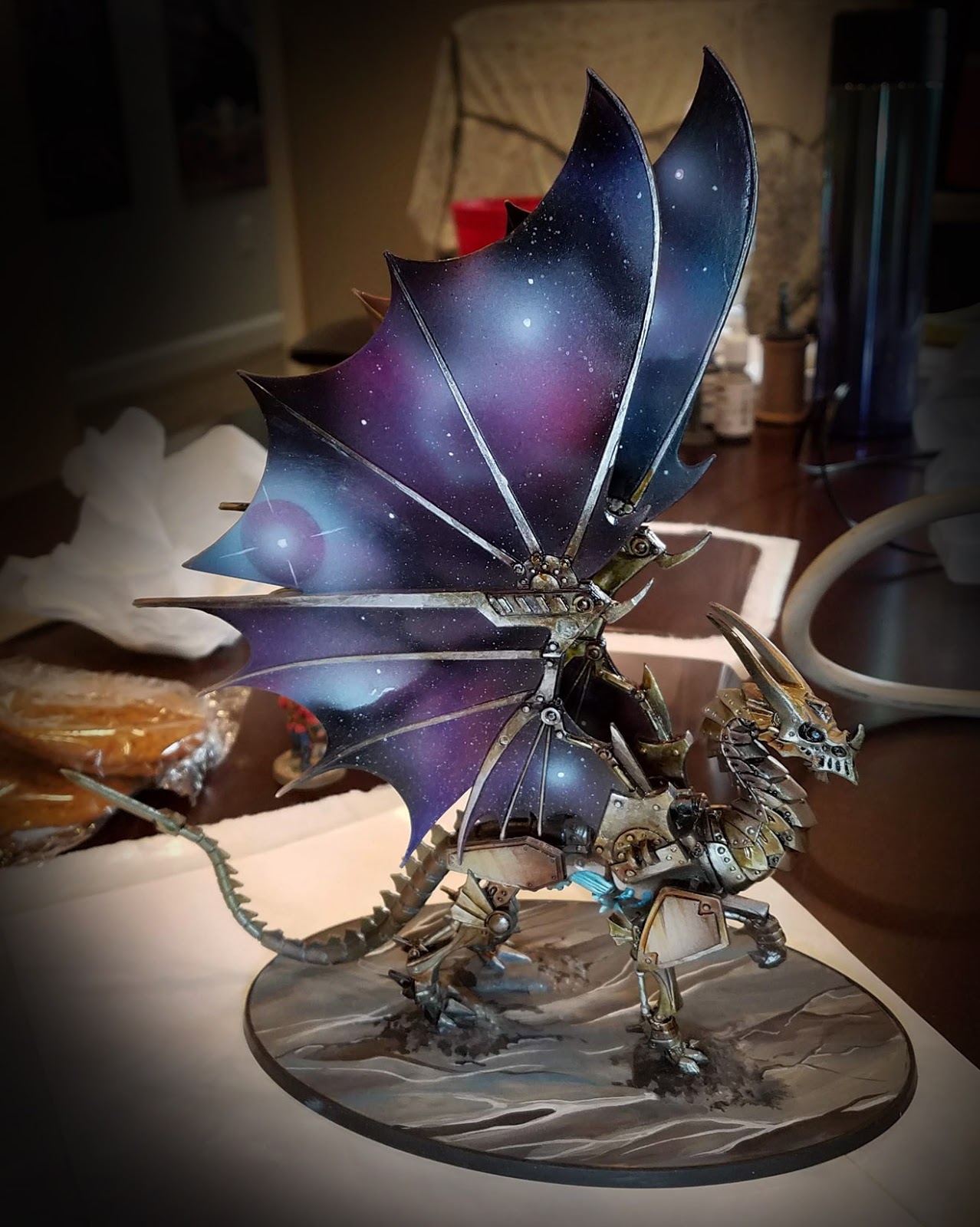