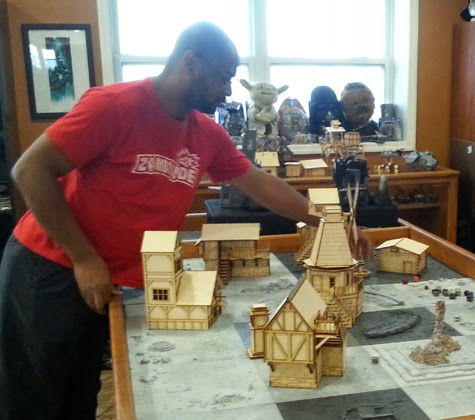 Tonight we have two tastes that go great together.

A brand new set of Tabelscapes tiles from Secret Weapon Miniatures, and a whole metropolis from Burn In Designs!!! 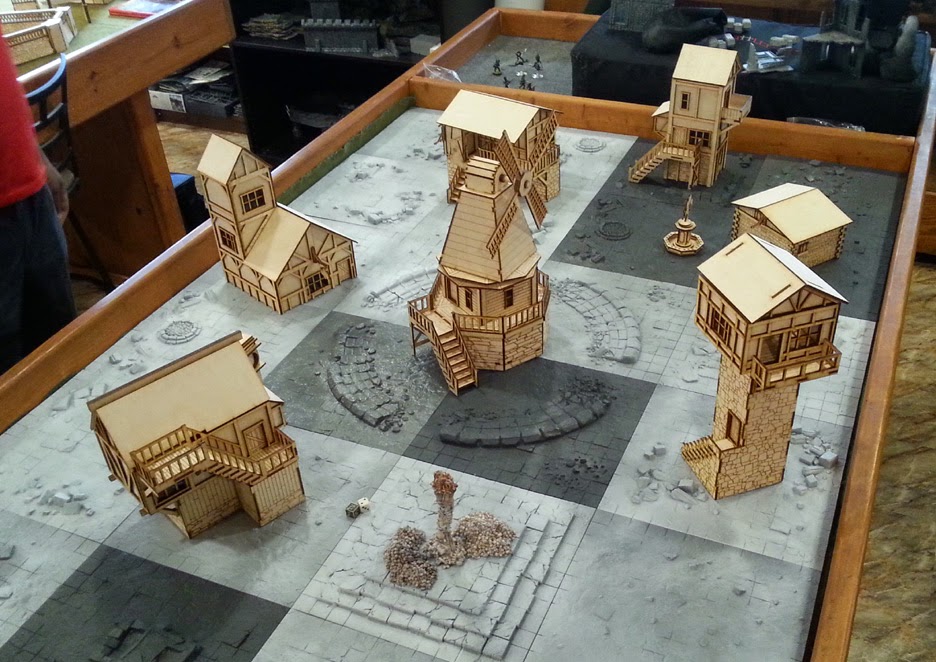 Lathan, Master of Lasers, carefully plots the layout of his Medieval village. 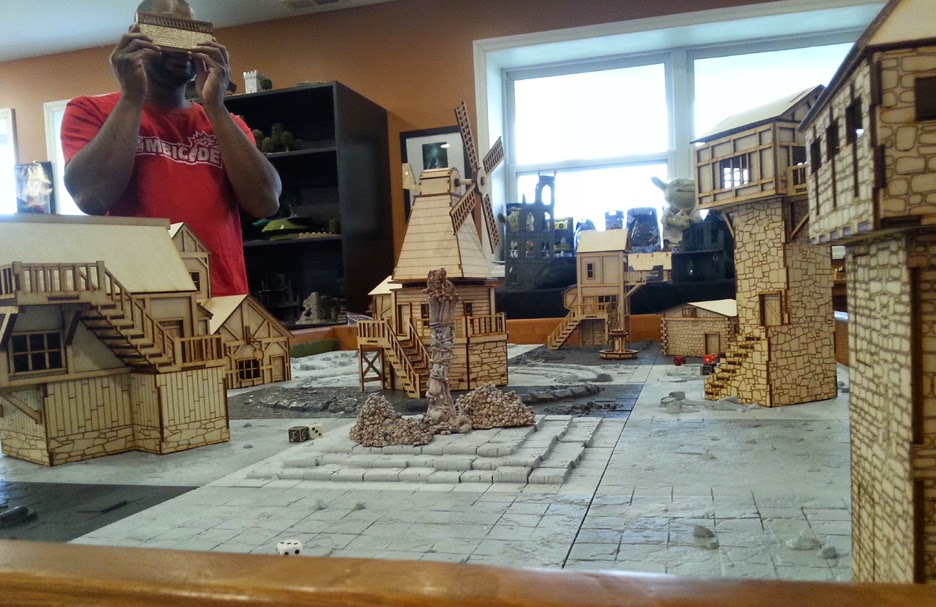 As you can see, the structures are designed to have decent height, as well as a wide enough base to actually block LOS, instead of hiding the foot of a goblin. :-)  Check out that windmill!  And yes, it does spin!! 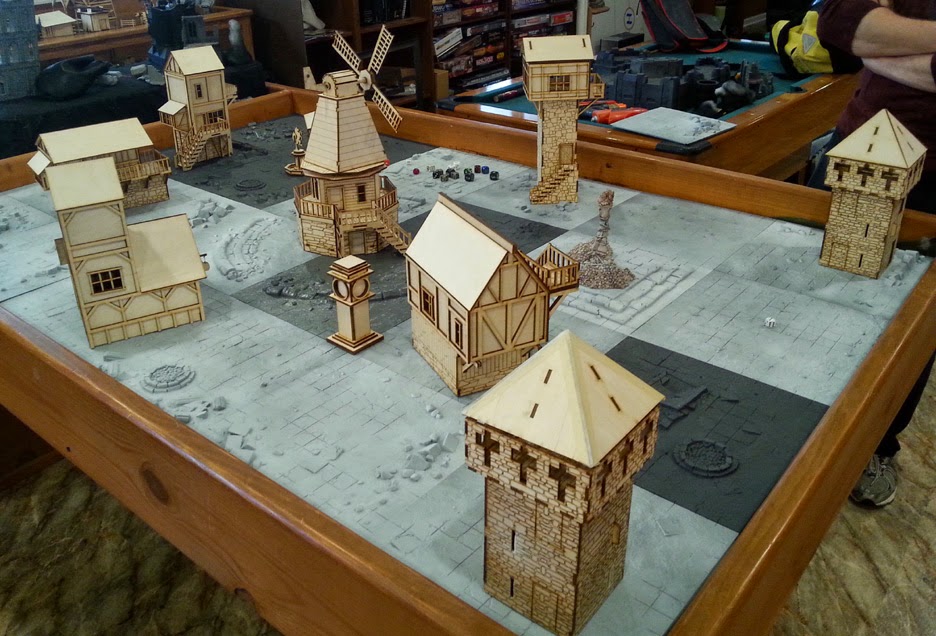 The Tablescapes tiles are held together by some ingenious plastic clips.  They fit snugly, but can be removed without too much pressure.

We rolled dice on them, and we were pleased with the lack of clattering, and that they did not bounce all over the place!.  It was so much nicer than a certain other variety of plastic tiles that we all remember...

Joe also happened to have some very neat flame markers on hand.  These were LED tea lights with painted cotton over the top. 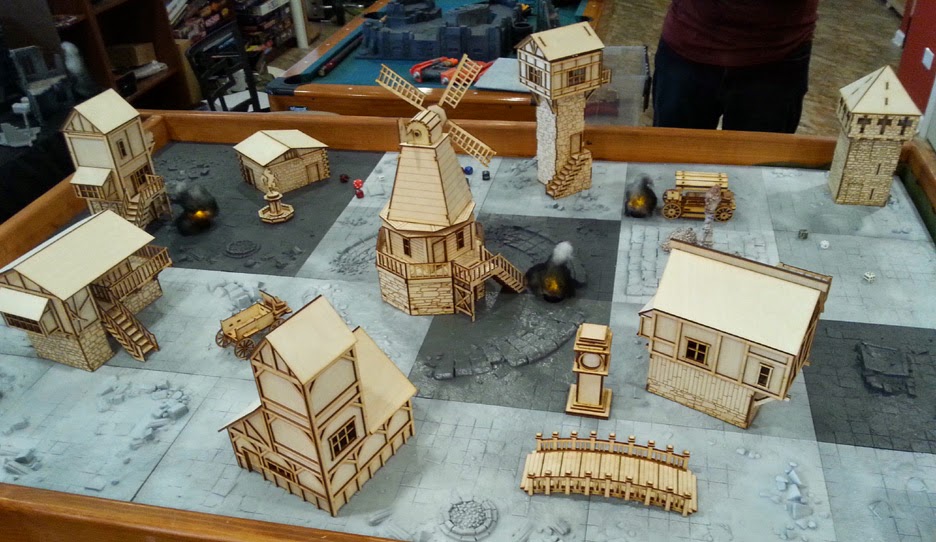 Another view of the windmill. 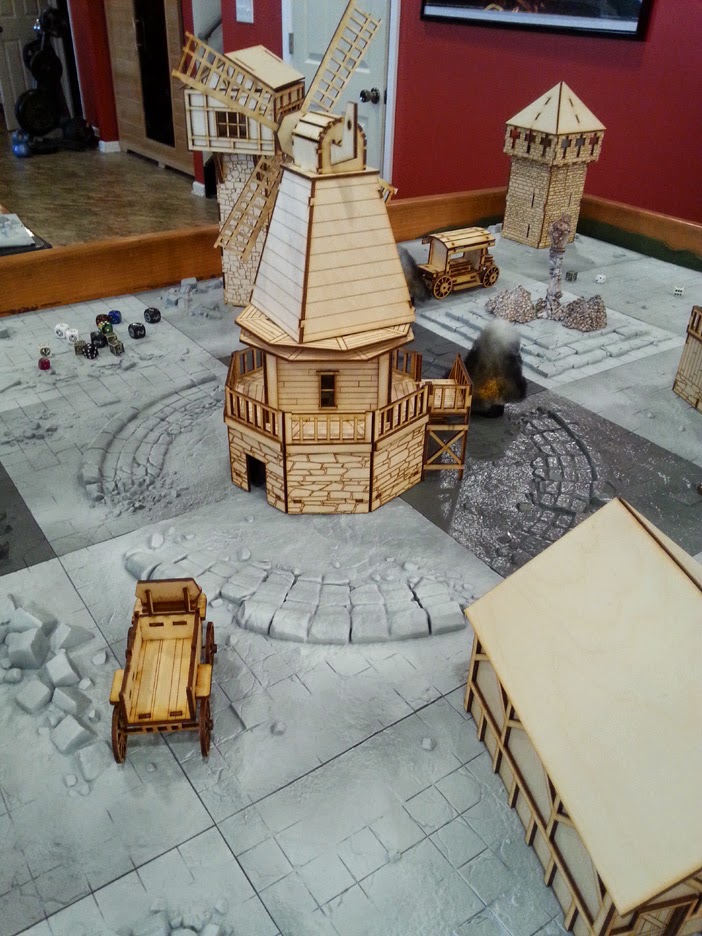 We all loved the fountain, as well as the Astronomer's Observatory.  You get a nice view of the flame marker as well! 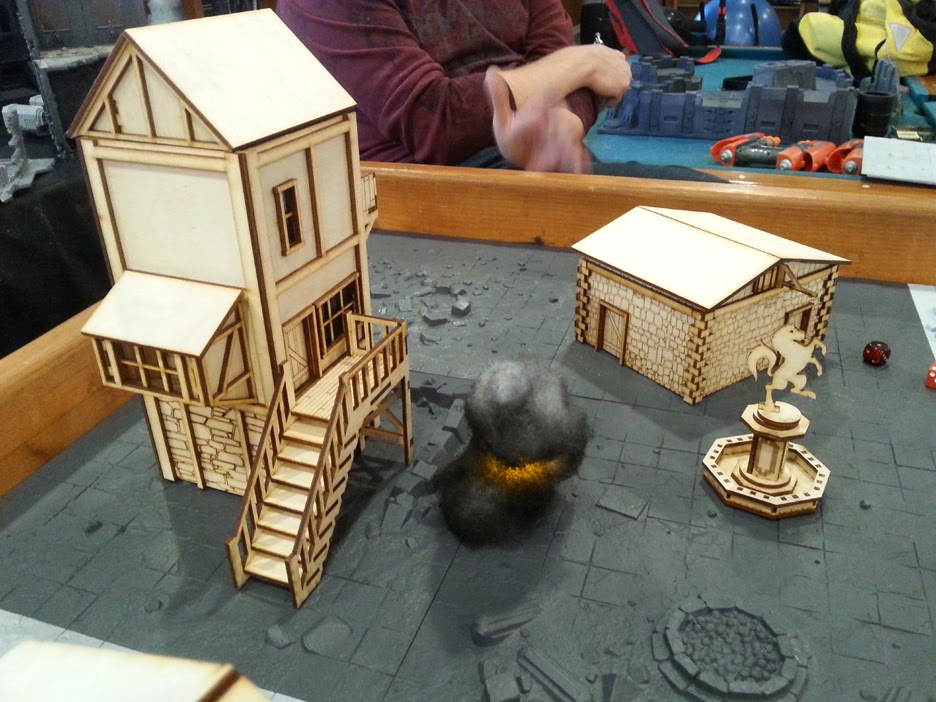 The Tablescapes could be oriented in any direction, in any combination.  Once these are painted up, it will present a magnificent table on which to play!

The terrain is not so tall that movement trays will topple over, but enough to get the point across. 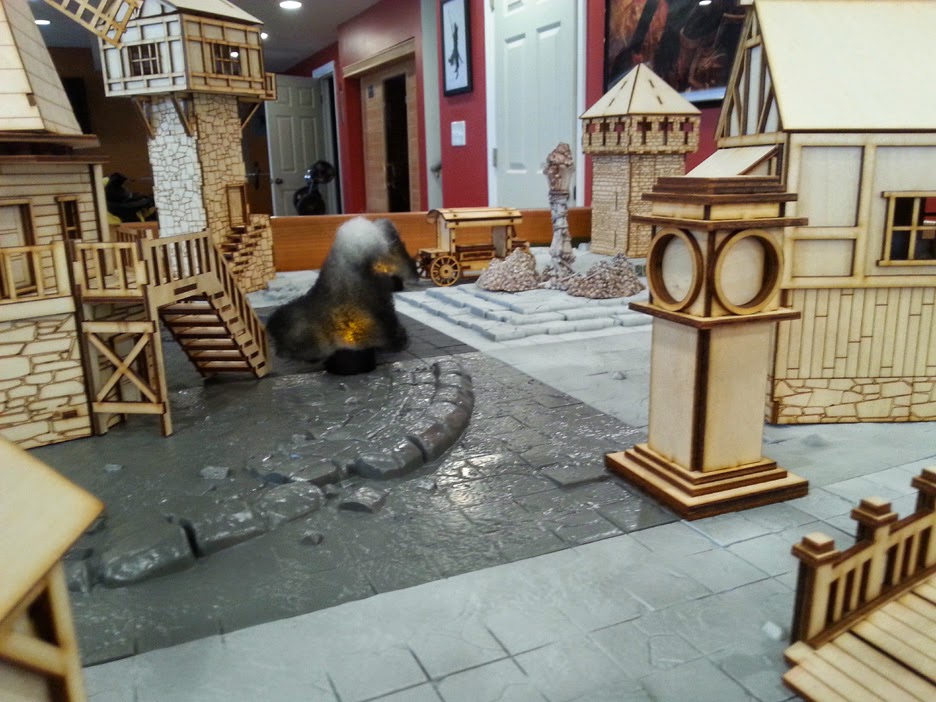 The Black Coach/Hearse is a very nice item.  There is even a casket which can be partially open!  Bring out the Dead! 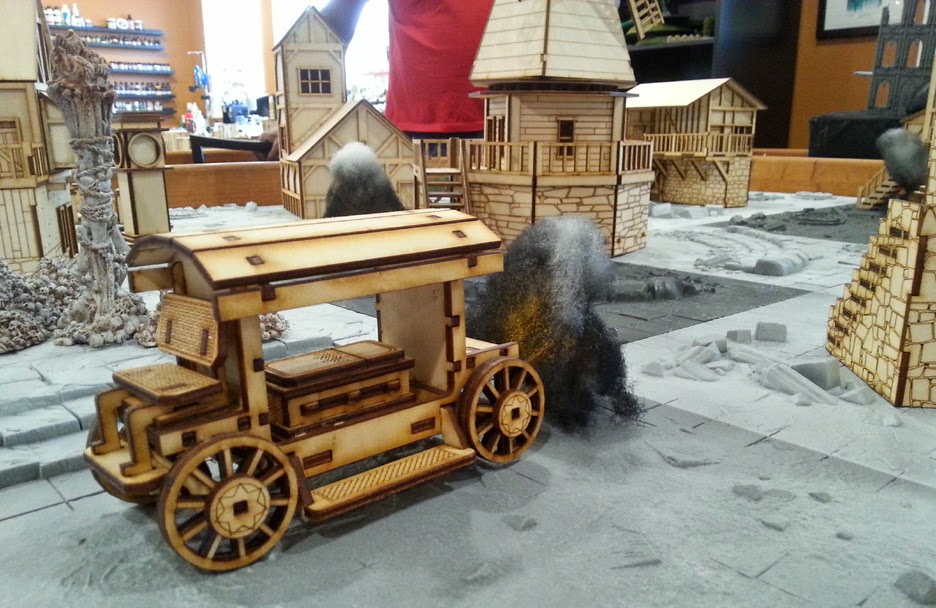 These towers are just that... towering over the battlefield. 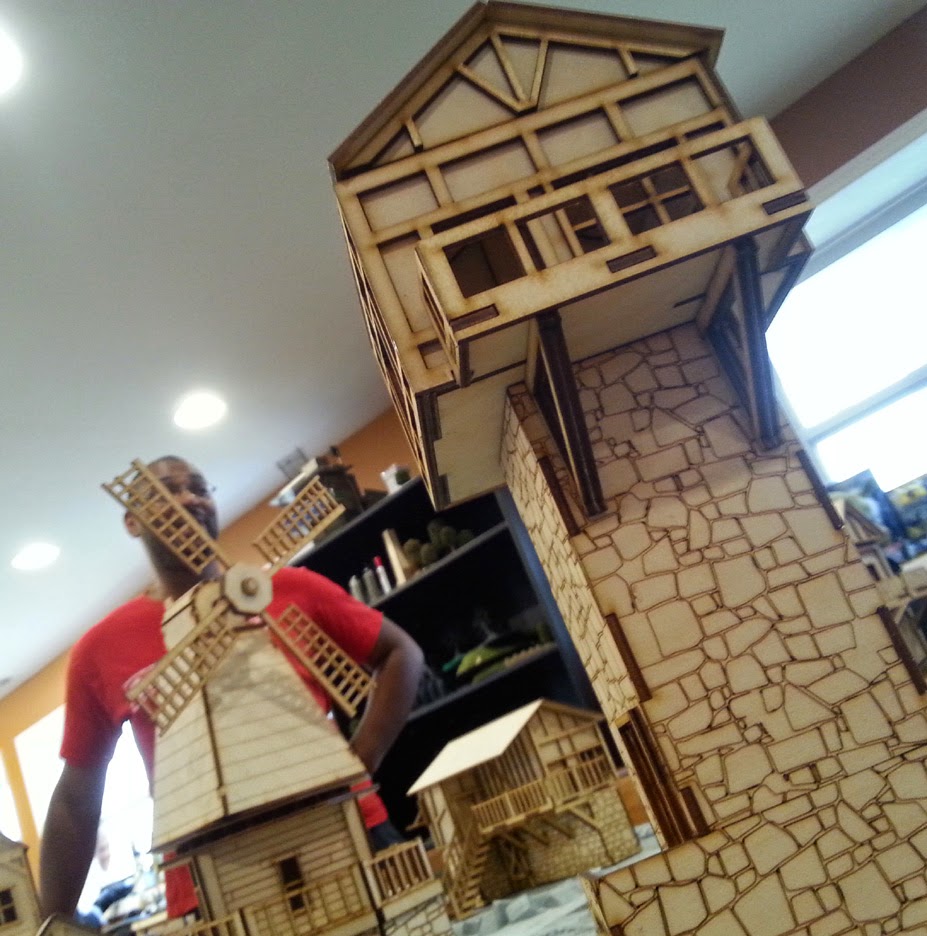 Down on street level, you can see just how cinematic this scene can be with some paint and some minis!!! 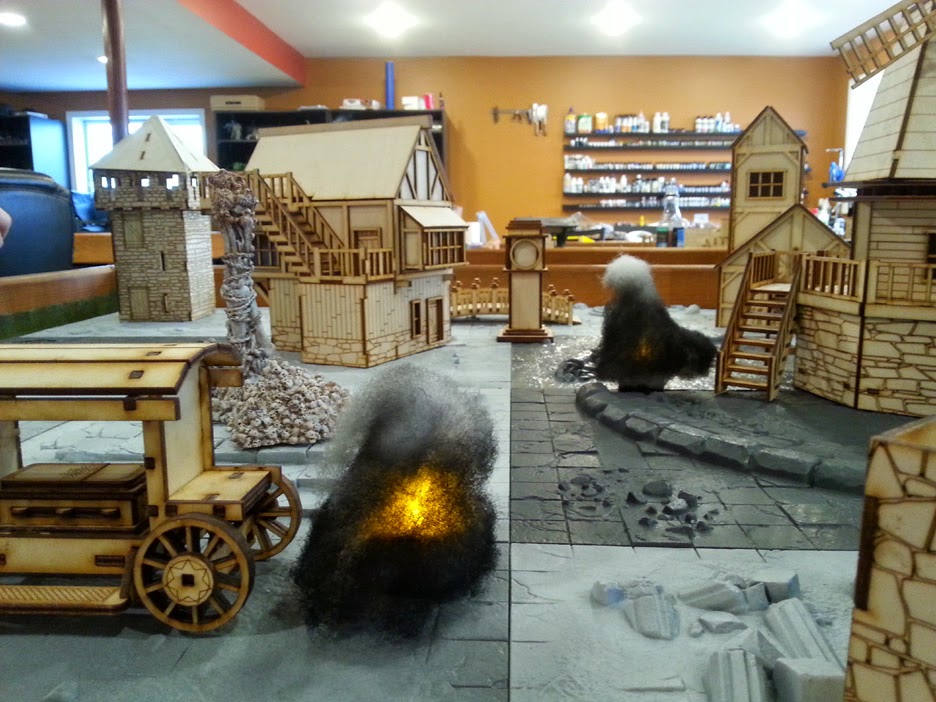 Rudy certainly appears to be excited!!! 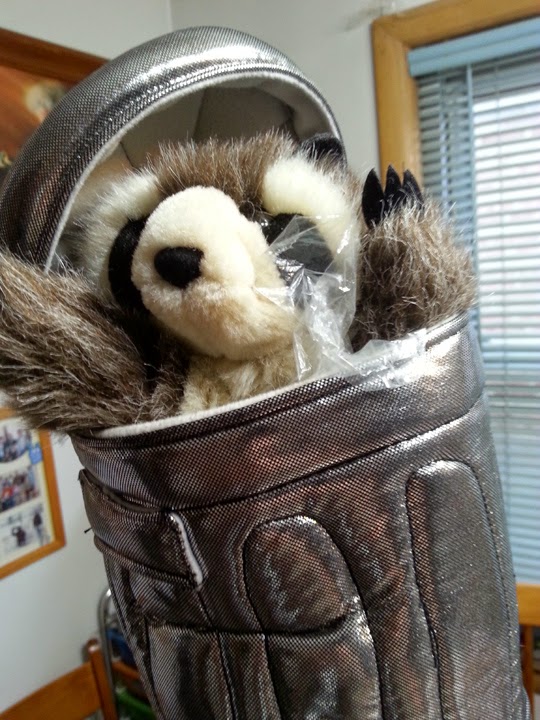 In other business, I meant to show you those rivets that were cut from the tubes of baked sculpey.

As you can see, I have two sizes.  I mention once more that it was so much easier to cut these from the tubes than it has been with the polystyrene tubing which I have used thus far.

Those chunks just flew off into space like comet landers with no harpoons.  Not so with the sculpey!!

So, kudos to Mr. Justin and Lathan on the incredible work they have done making such wonderful terrain for us to enjoy!!! 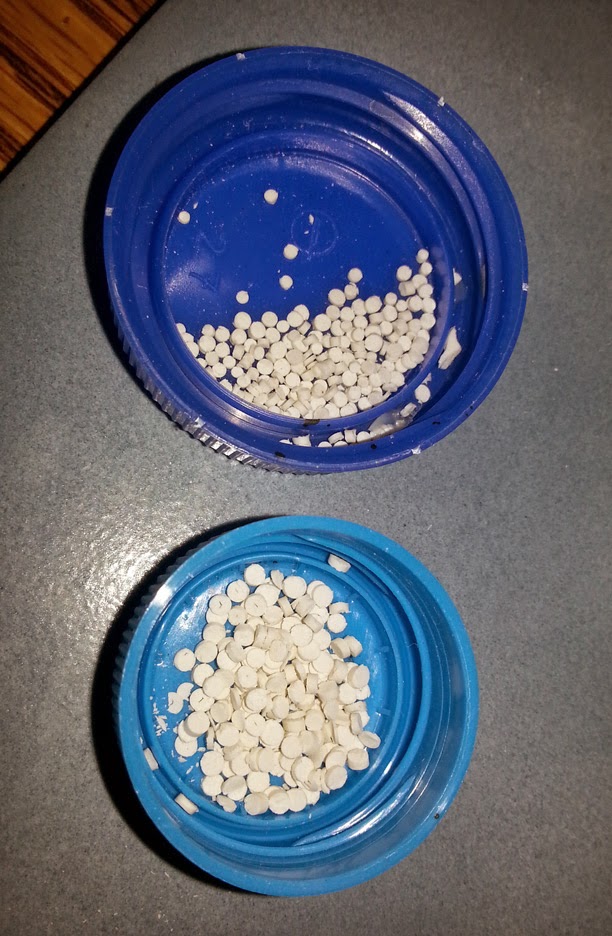 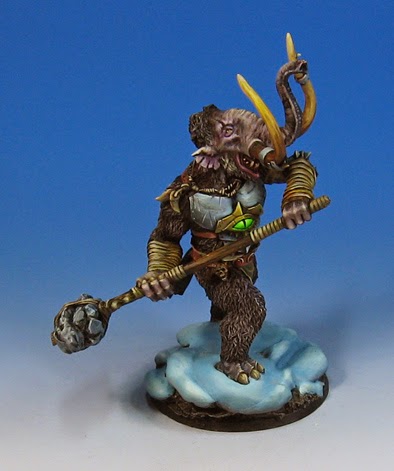 This is actually the largest of the Mierce Miniatures thus far.  Some of the other critters have been more beefy, but this is definitely the tallest!!

His weapon is almost the size of a small human figure :-)

I had a lot of fun working with subtle reds and grays, attempting to get the Woolly Mammoth look.  That meant using deep reds and greens together, lightened with seafoam greens and cyan.

Make sure you have lots of peanuts around this guy... he won't forget you if you do.

Posted by wappellious at 6:28 AM 4 comments: