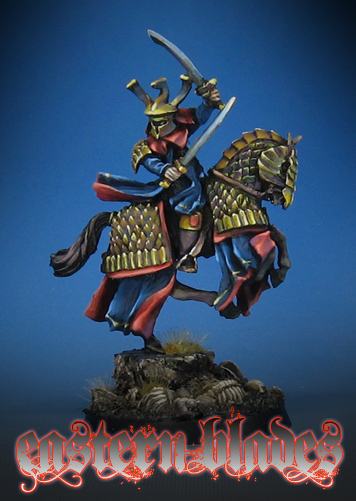 My old Easterling army was a cavalry based force, and this character was one of the key elements.  As the blades suggest, he was very proficient in close combat.  In the Lord of the Rings game system, cavalry not only had speed, but some serious hitting power when matched up against infantry.

Knocking down an opponent was a very key tactic in the game, and this was something that a mounted figure could do to a standard infantry man.  Also, the soldier on top of the horse could survive a hit, as it was possible for the horse to be killed instead.

By comparison, most cavalry in other systems were nothing more than fast moving infantry.

It was this depth that made LOTR my favorite system at the time, and prompted the use of chariots for my Khandish allies.  The chariots had a further level of charging impact, and additional layers of survivability.    Once again, chariots were usually treated like fast moving infantry that might get some generic impact hits.

These cavalry units could be spurred on even further by war drums and priests, increasing their speed and ferocity.

Posted by wappellious at 10:21 AM No comments: