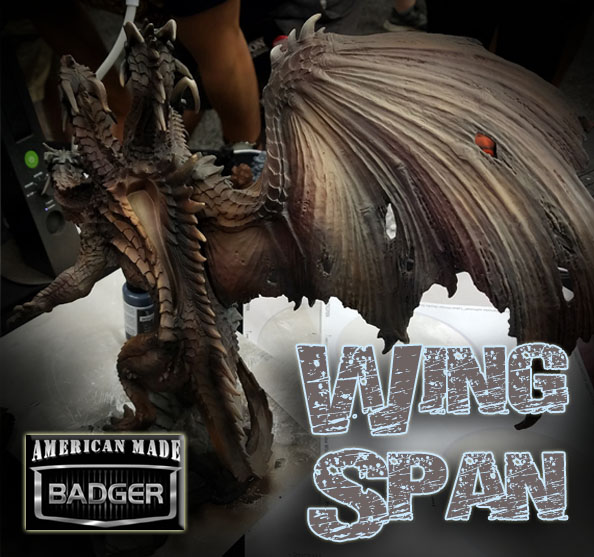 Among the many thing that I prepped and brought to GenCon for painting in the Badger Airbrush booth was the massive multi headed dragon from Reaper Miniatures.  It had been part of the BONES 3 kickstarter campaign.

Here you see some of the final setup in the booth on Thursday morning.

In addition to the BONES minis, I had a collection of Bolt Action tanks, weapon teams and infantry.  This would be used to show how to effectively use the "primer painting" method that you have seen me using lately. 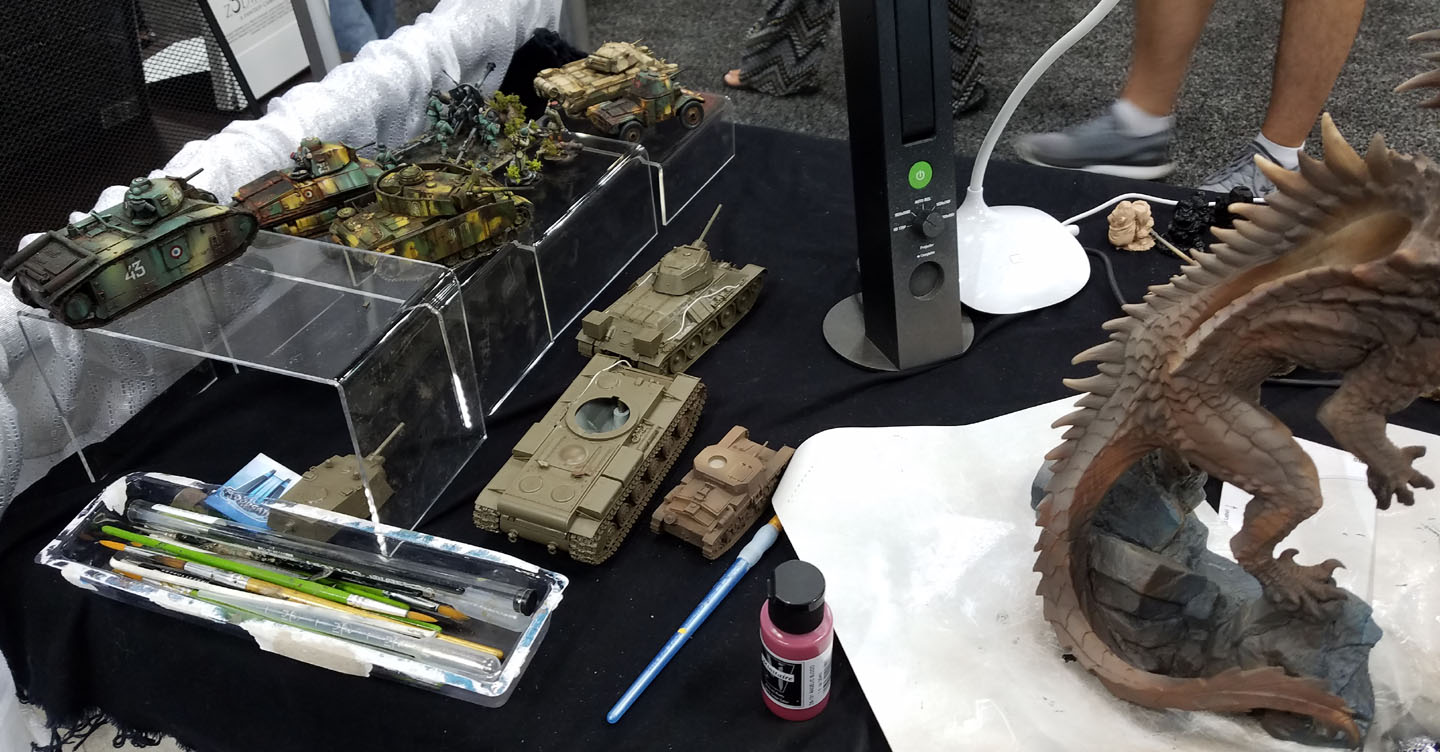 I had no idea what I wanted to do with the dragon.  An idea to make it into a Fire Dragon was even entertained, but I just decided to start spraying various colors of primer at it to see what developed! 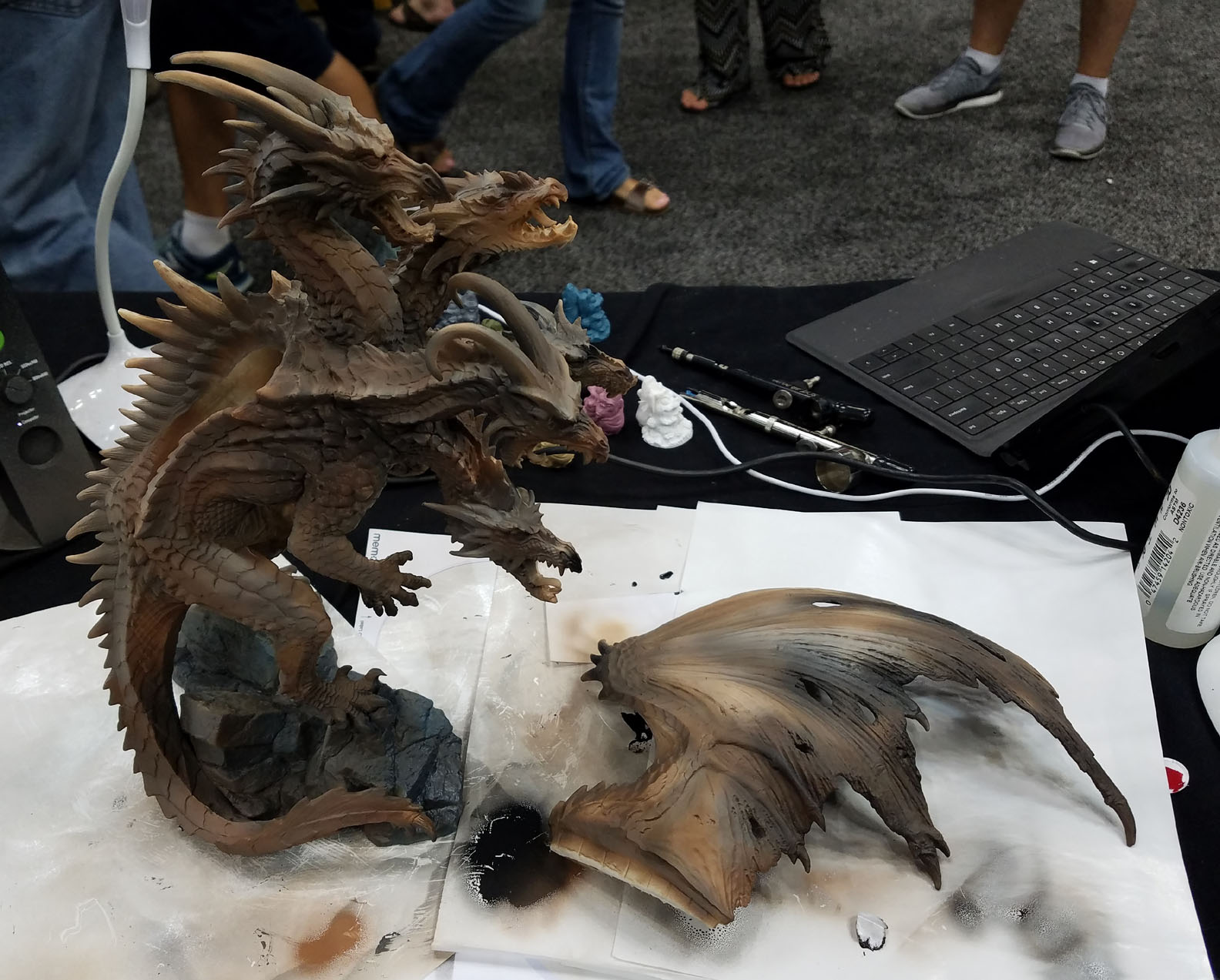 I made a few dark mixes of the Stynlrez primer, a favorite product of mine from the Badger line.  I took black and let that mix with some of the dark brown primers for the deepest recesses.  At my usual high PSI of around 40, the paint had no problem reaching into those hard to access areas. 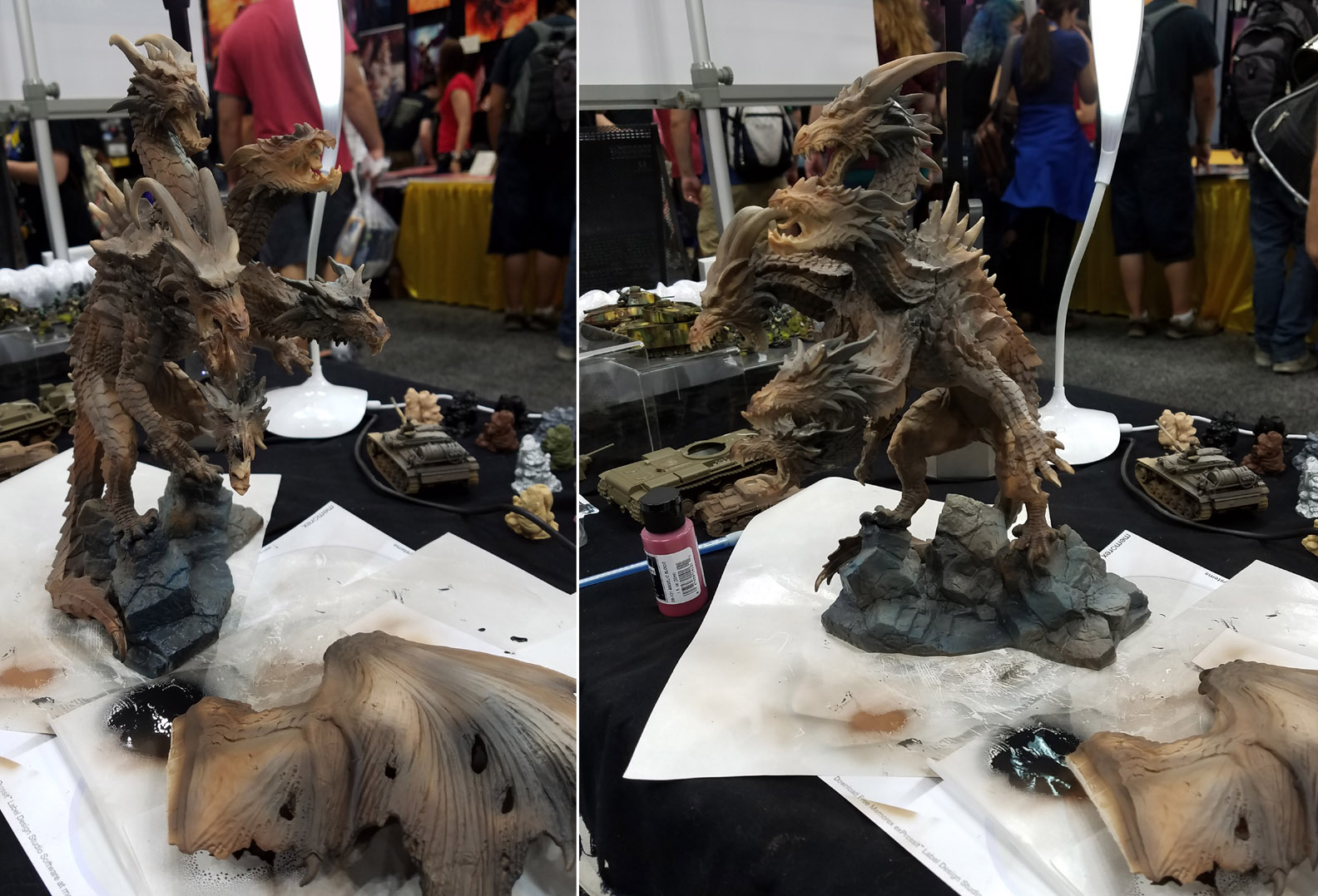 Once the darks had been established, I went back in with lighter mixes.  There are 12 colors of primer to choose from, so you can make just about anything!  I even mixed in some of the blue primer here and there.

I showed onlookers how they could position the airbrush and the figure itself to get instant highlights on raised surfaces like the wings.

Another experiment was performed, and that was to mix in a few drops of the Ghost Tints with the primer.  This created some amazing colors an effects, and I will definitely be doing more of that!

You can see how I focused on those darker areas to begin with in this image.

Also, while I had this set of primer colors going through the brush, I worked on some of the other miniatures and vehicles.  When I do an airbrush session at home, I often have terrain pieces, figures, vehicles, planes and monsters all lined up, just in case those colors could be used on any of those items.  It really maximizes your time, and the amount of paint you need. 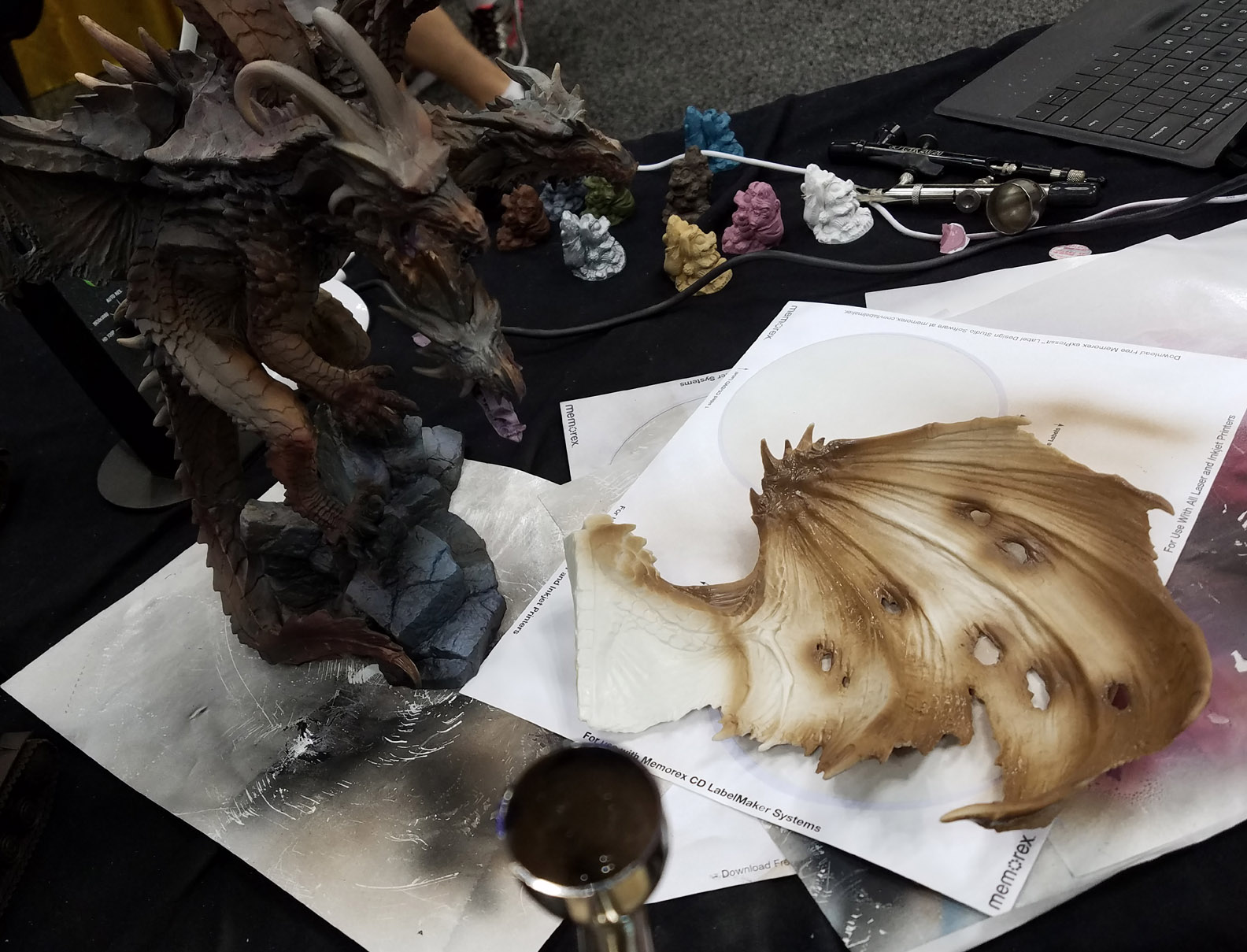 This image shows some of the tinting that I mentioned, including some blueish colors, and even hints of red.  With so many elements of interest on this giant figure (not the least of which was 5 heads!), it is very important not to have huge swaths of similar colors. 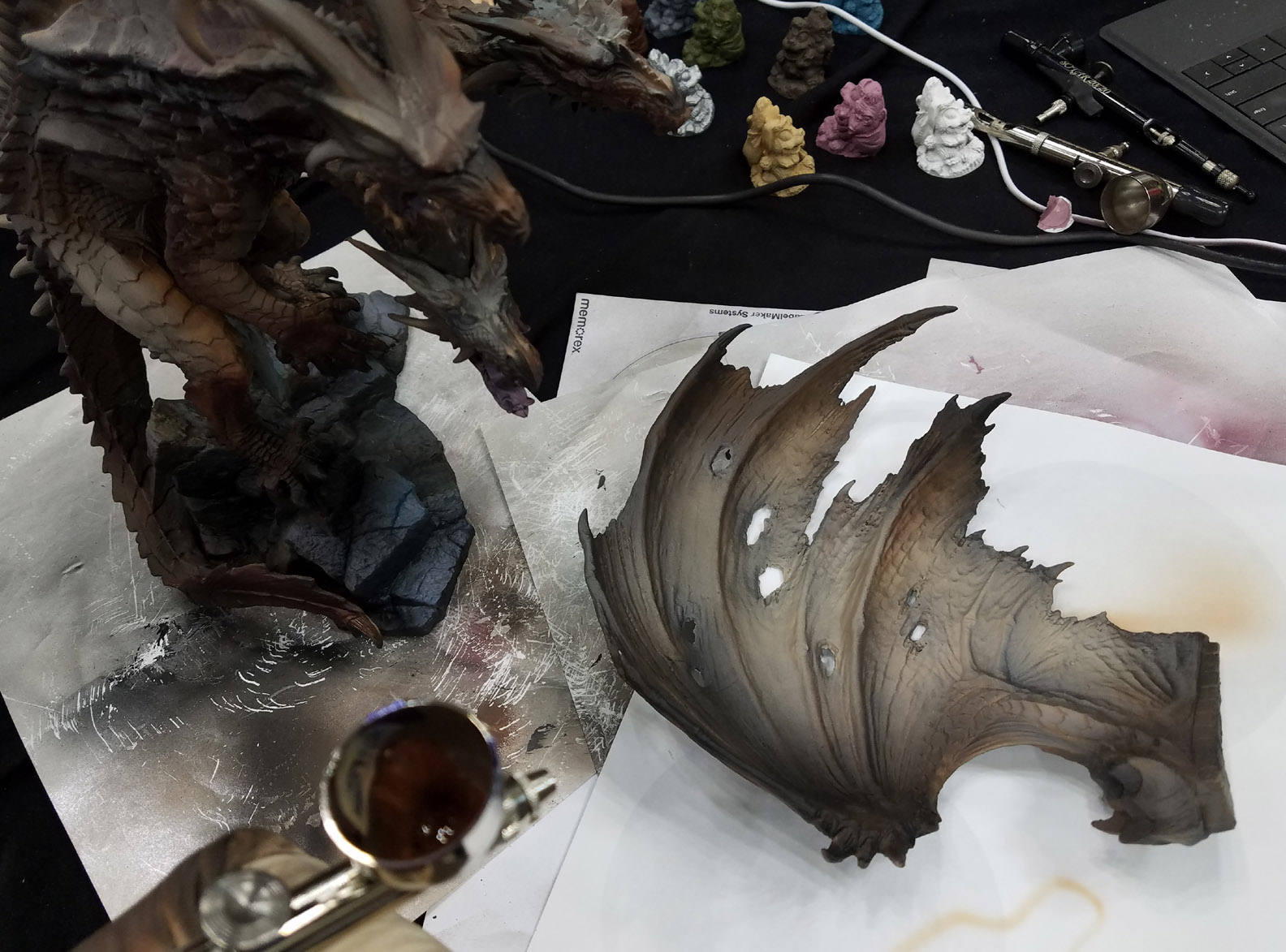 What I like about doing this primer painting with the airbrush is that I can experiment on the fly with all kinds of colors in a matter of seconds.  If I don't like the result, I can simply primer over it with a different set of colors.  This was done with a dragon that had been painted green at World Expo. 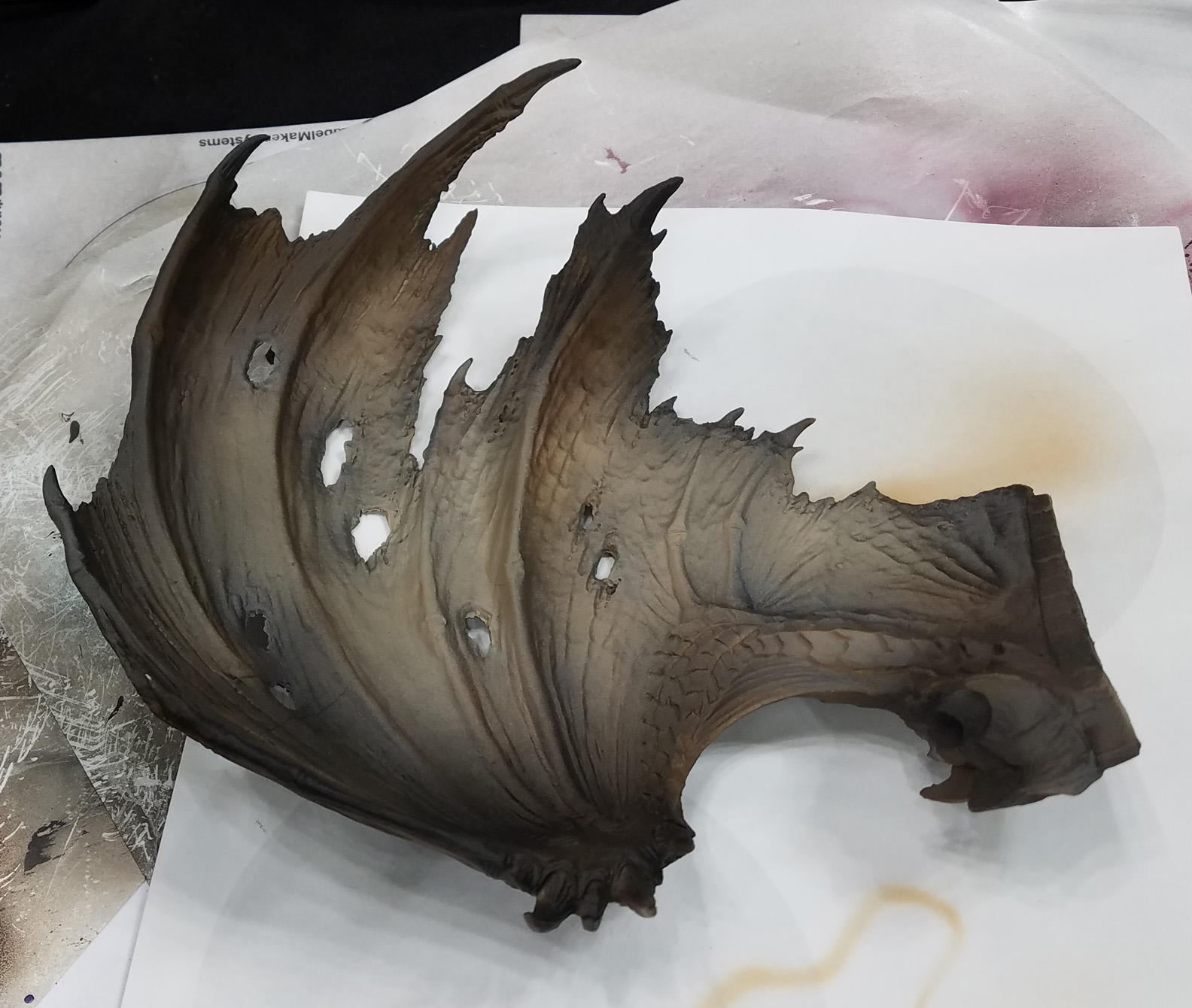 You can see some of that tinting and adjusting here.  I had to make some changes on the areas where the wings met the main body, mostly tinting them more reddish and making them darker.

Stay tuned for the next episode, where I will discuss how regular brushes were used to work from the basic colors created with the airbrush, and mixing the primer and Ghost Tints!

For those of you who have asked me over and over again where you can get the Badger primers on line... I finally have a location for you.  That is at webairbrushes.com.  If you use the discount code of "Wappellious", you will get a 42% discount.    Just click on paints and scroll down to the Stynlrez primers! 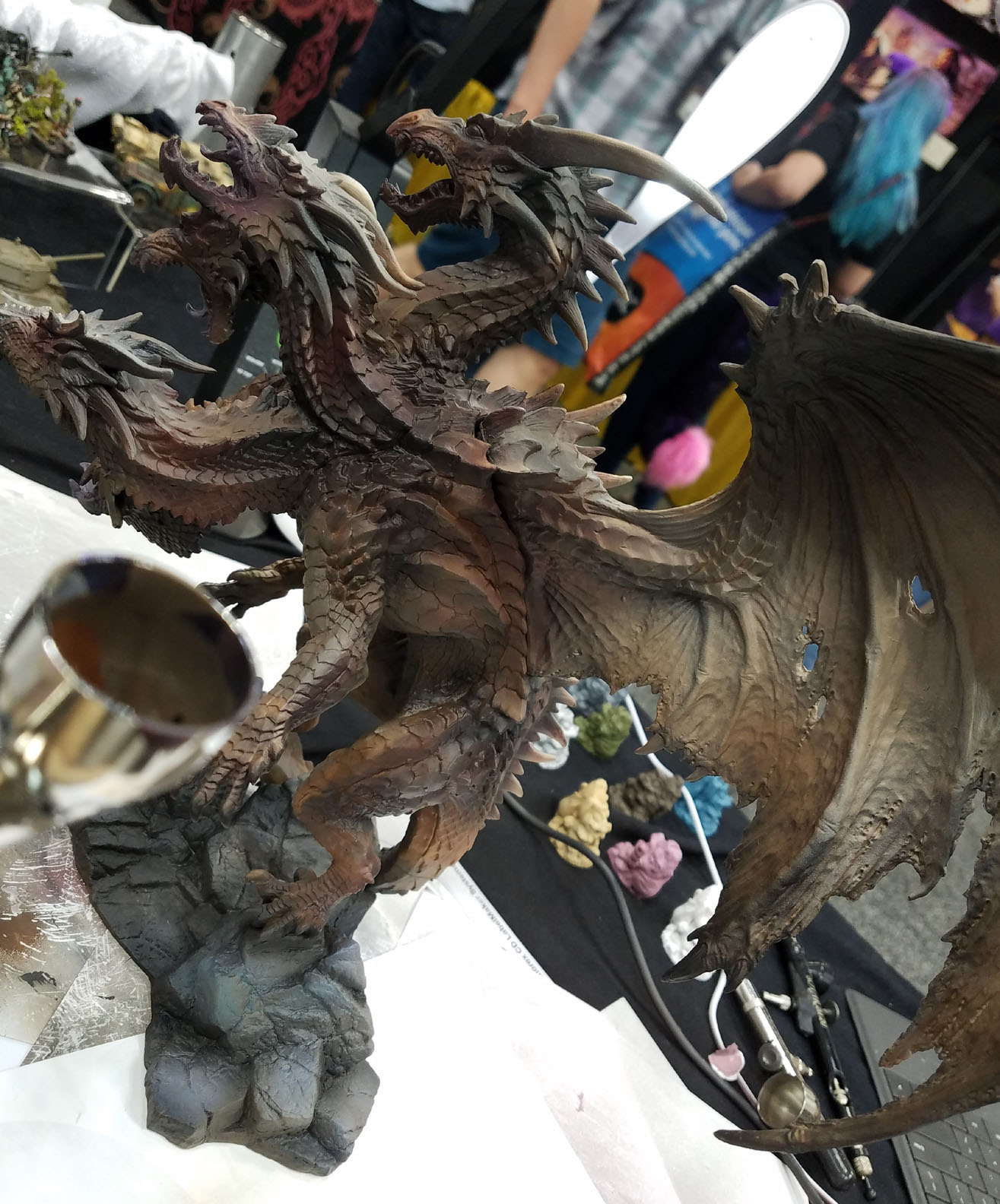