A terrain board for every purpose, and every system... 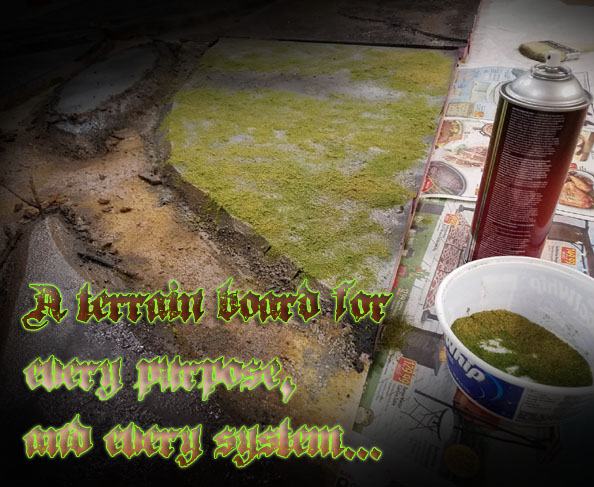 When the need arose for a new, multipurpose terrain board, it was time to head to Home Depot and various craft stores to see what we could find to make this board, and do it in a very compressed time frame!

Pink foam is always a starting point.  Due to vehicle size, the thicker board had to be cut into smaller sections.  In the top left corner you see my favorite material, the 3/16 inch thick undelrayment foam!  This is great for buildings, gun emplacements, you name it! 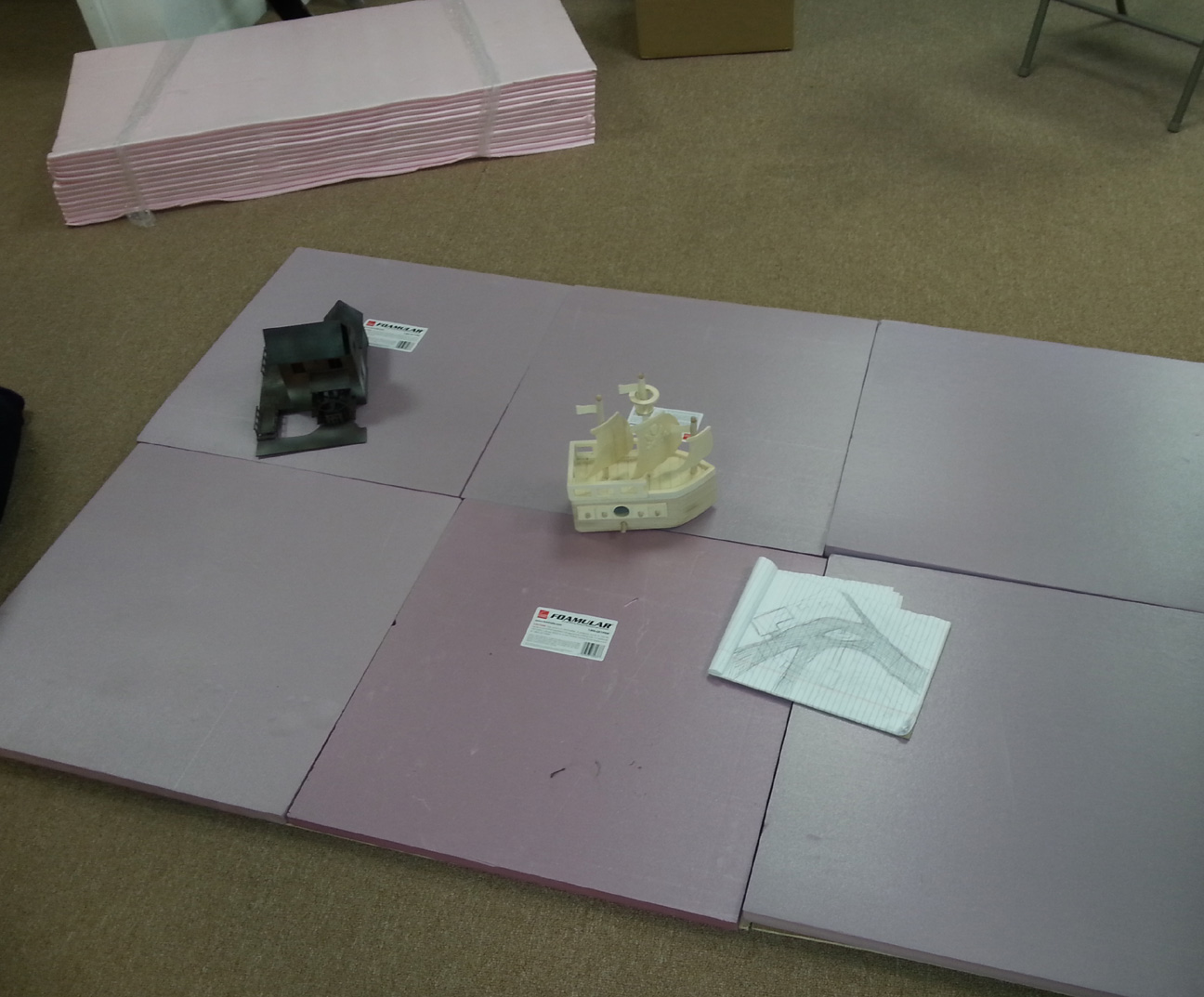 Here are some other materials that we will focus on.  Various moss, flock, water effects and more.  I discovered that the Titebond wood glue has a few different forms.  I think this one might have been more of a rapid drying variety, which was important for this board! The original intent was to make a swamp/forest board for a western game, but that has since gone by the wayside.  Fortunately, we needed something along those lines for our Bolt Action games!  Roy will be playing British, Russians, and Finns, while I play a variety of about 15 other forces.  Everything from French to Italians to Hungarians. 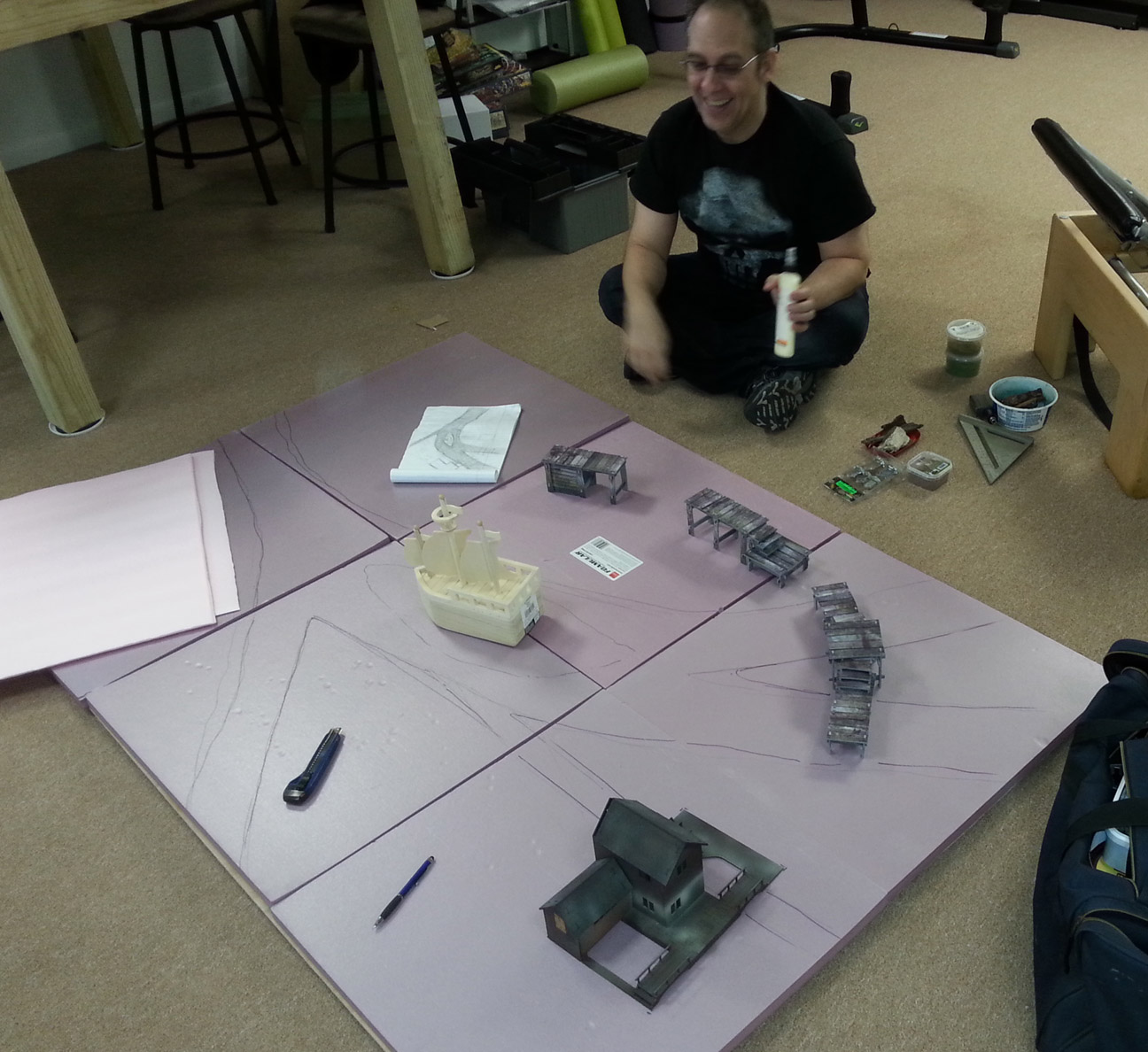 We knew that we wanted some kind of island in the center of a river, with various branches.  Also, we had a watermill, so a section in the upper left was created for it in the form of a water channel. 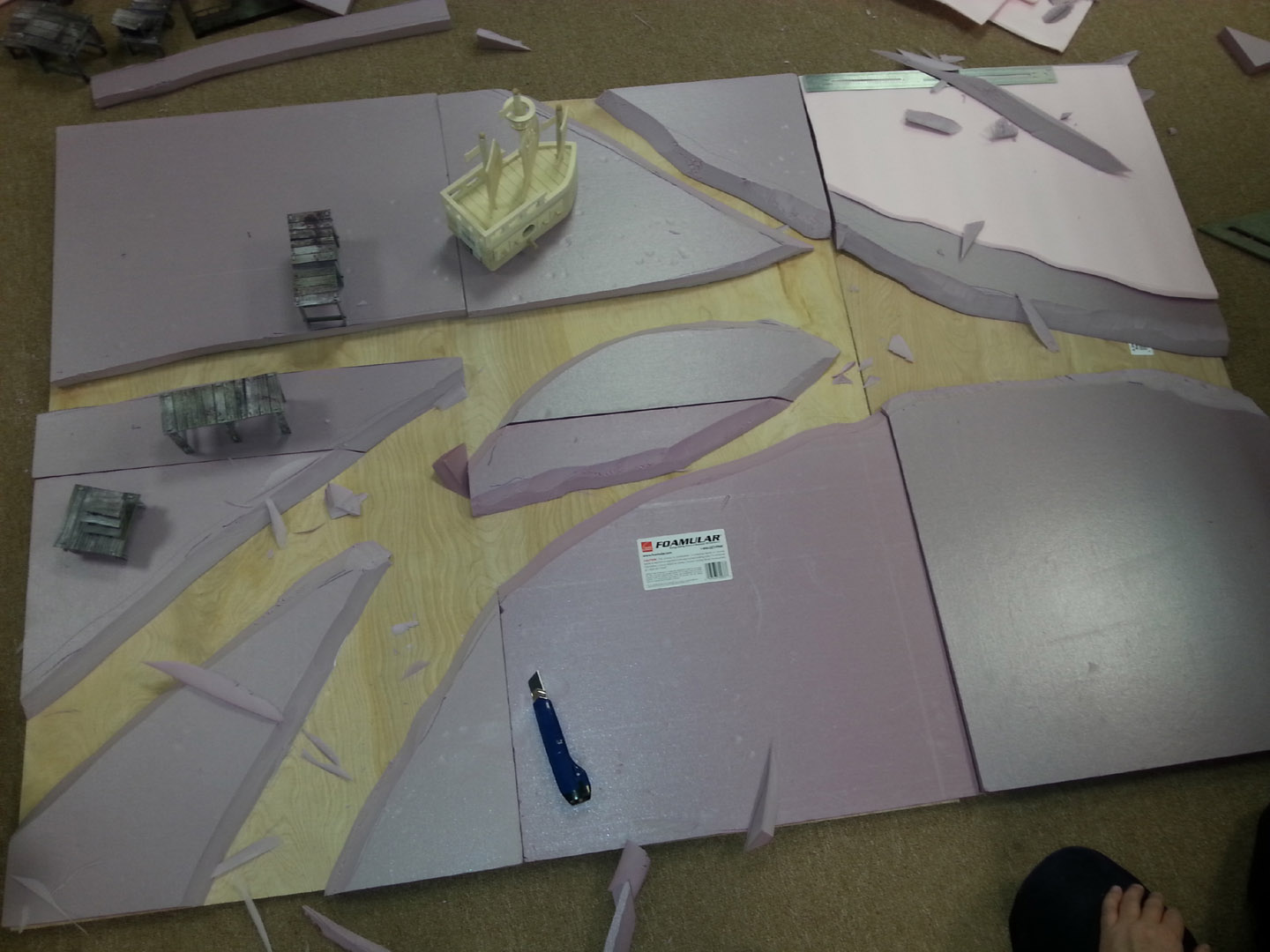 The initial pieces of thicker board were glued in place, and some weight applied.  We also tried to make some "open spaces" where we could have lots of options on scatter terrain.  Covering these seams will be something that is dealt with as this story moves along... 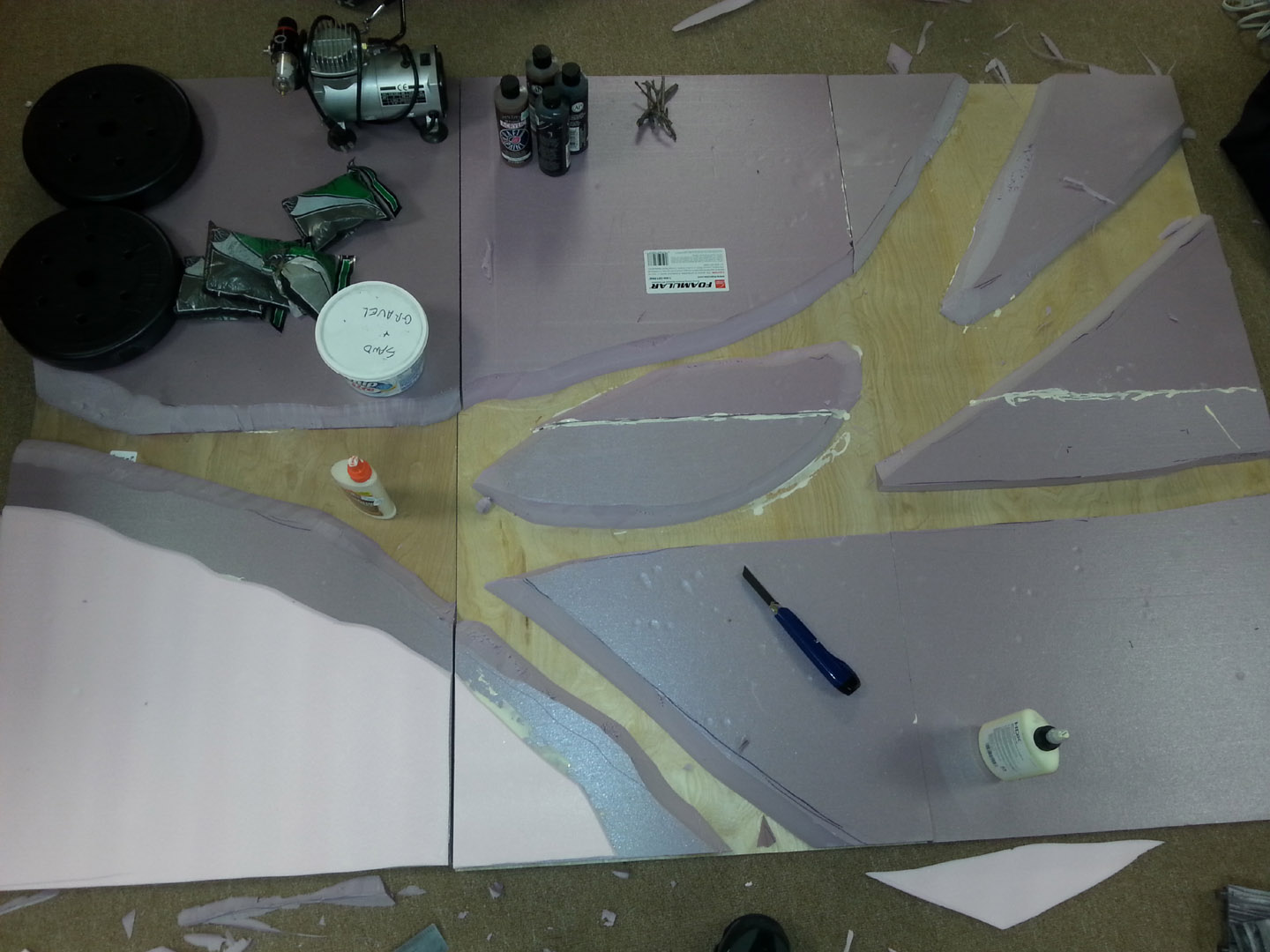 Once the very rough river channels were cut (again, time was very limited!)  Some rocks and logs were added to areas where the flow of water would have pushed that material up against a fork in that river.  This would not be a raging torrent, but we did want to have a few places where the water might be churned up against large rocks and logs. 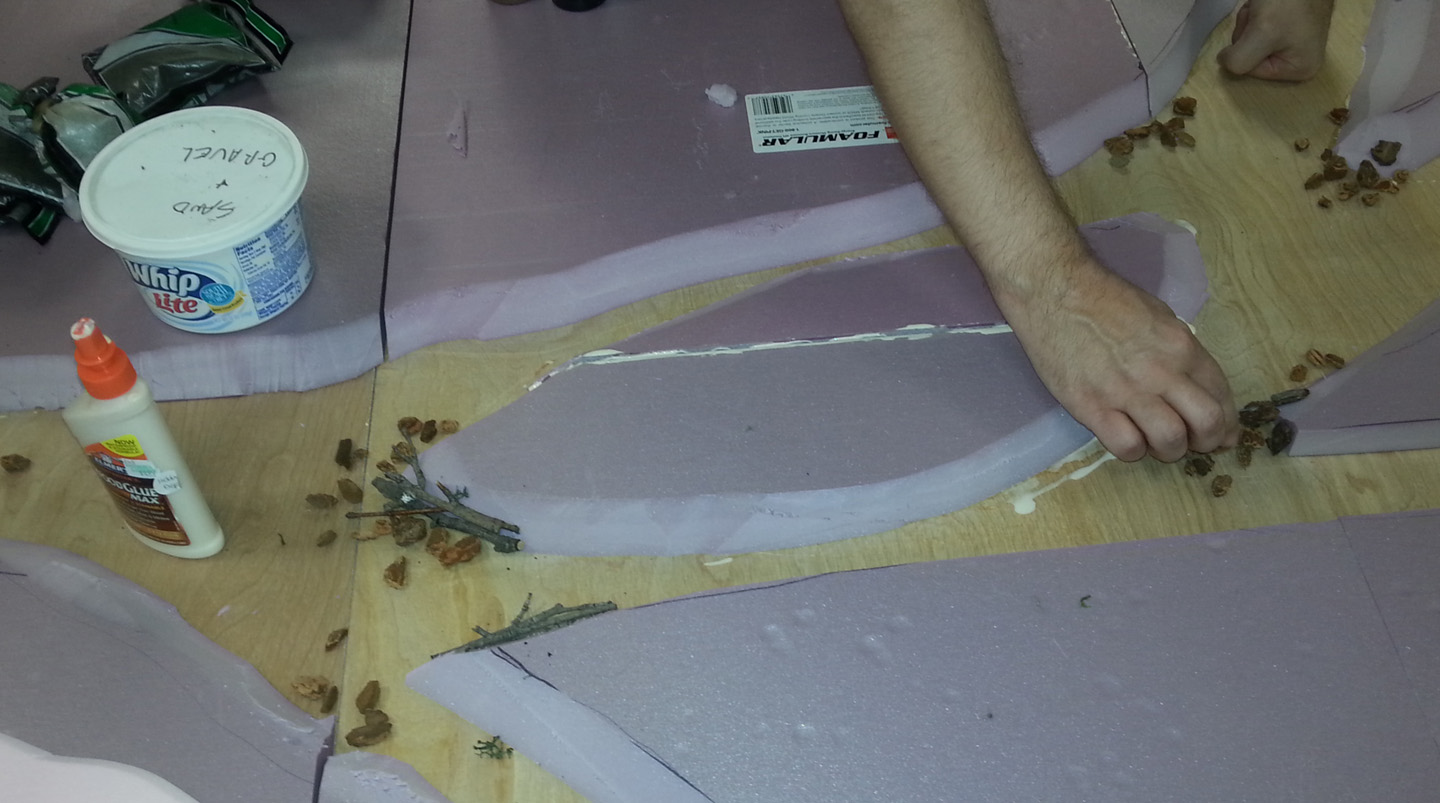 Once the bigger rocks and logs were in place, smaller and smaller sized gravel and ballast were added.  I was not too concerned with exact textures here, since much of this would be covered with flock, and then water. 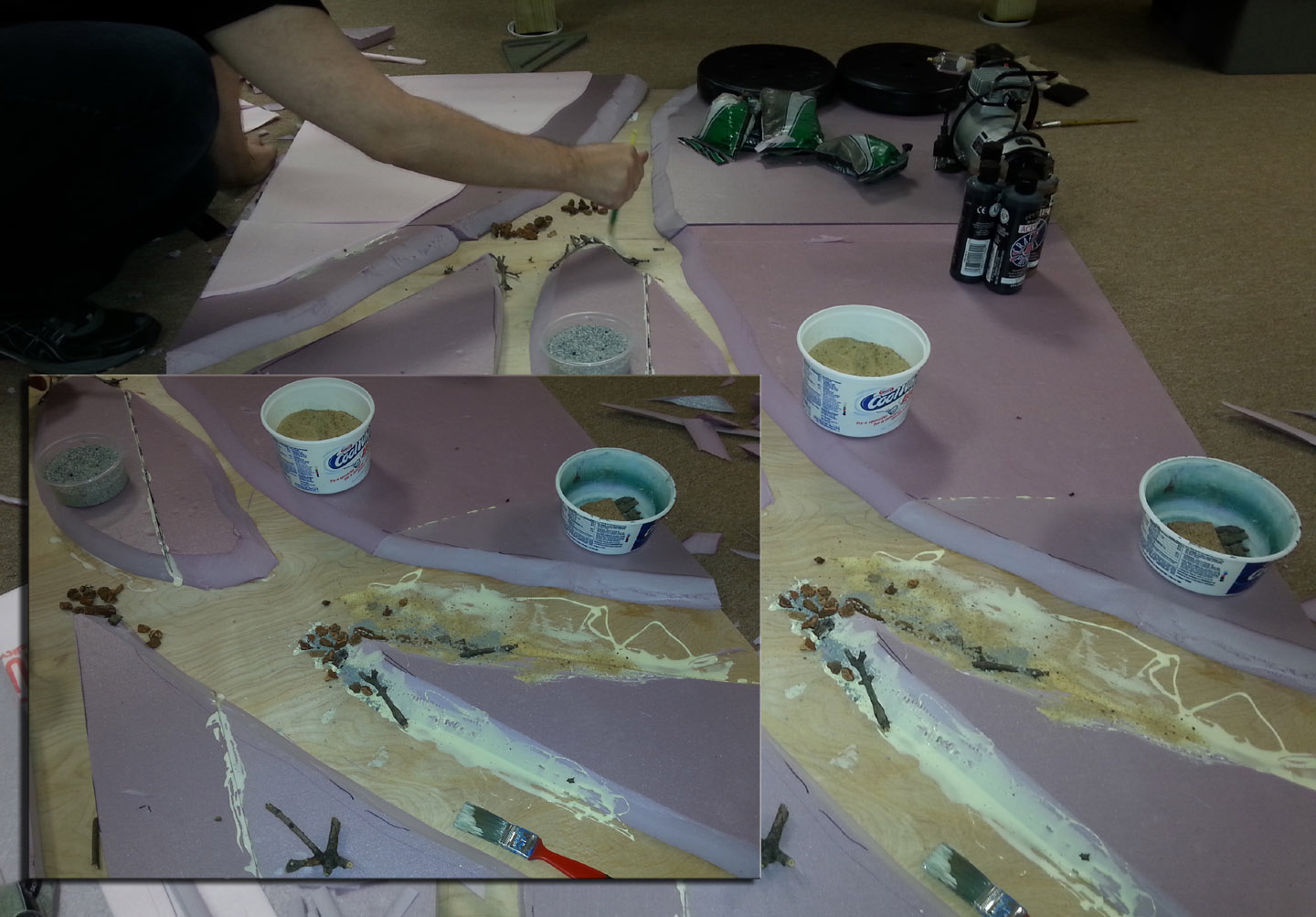 In this step, I deal with one of the seams.  This is a junction of two separate pieces, so I tried to have as uniform a texture between those two boards as possible.  That meant having the widest expanse of open river, so we would not have to match rock and log debris patterns.

There would be plenty of water and flock going over the top of this too.  In the first image, you can see how I worked the river banks right up to the edge, and then attempted to maintain the same level of texture onto the next panel in image 2.

For the channel that was cut for our watermill, I quickly made some flat boards which would line the sides of this channel.  I was looking forward to having the most water effects wave action in this area! 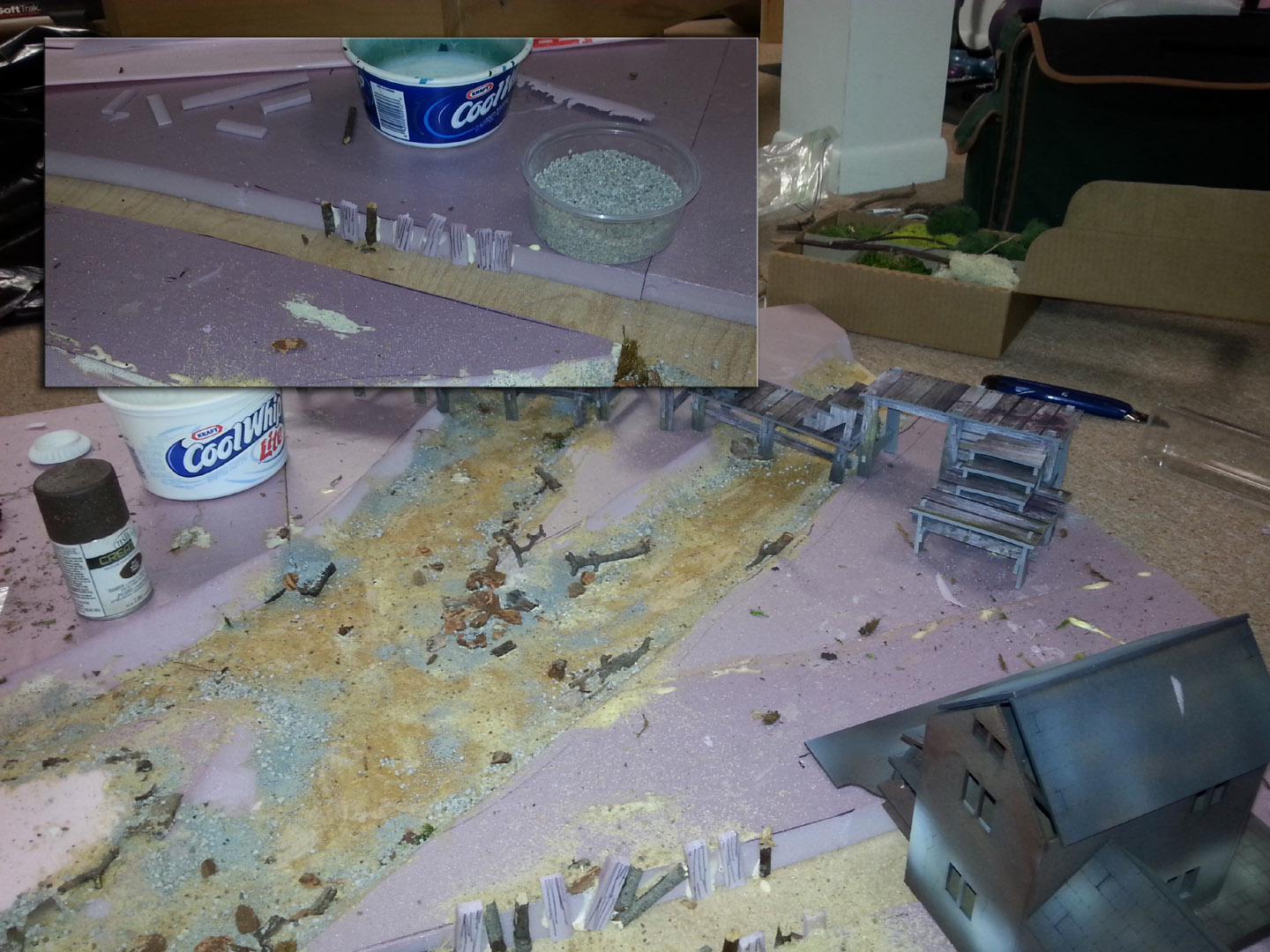 Thanks to the rapid drying nature of the wood glue, we were able to apply some layers of craft paint to the exposed foam.  This was done to protect it from the aerosol texture paint that we wanted to use to get more texture on the river banks, as those were cut very rough.

If you spray that kind of paint on the exposed foam, the chemicals will eat away at the foam, so this is why it had to be protected.  Finally, it would provide a decent undercoat color for the subsequent flock and foliage.

This was a mix of brown and black paint, and allowed to dry as we ended the session for the day.  I think this part took about 4-5 hours.

So, with the board completely dry, I sprayed the texture paint into the river beds, and especially on the banks to hide the rough cuts.  Of course, this also made a nice undertone for the flock, which would be applied next.

This was a variety of shades and textures from Woodland Scenics, and it will be adhered with the use of some fantastic spray glue from Home Depot!  That will be shown in more detail in the next article or two. 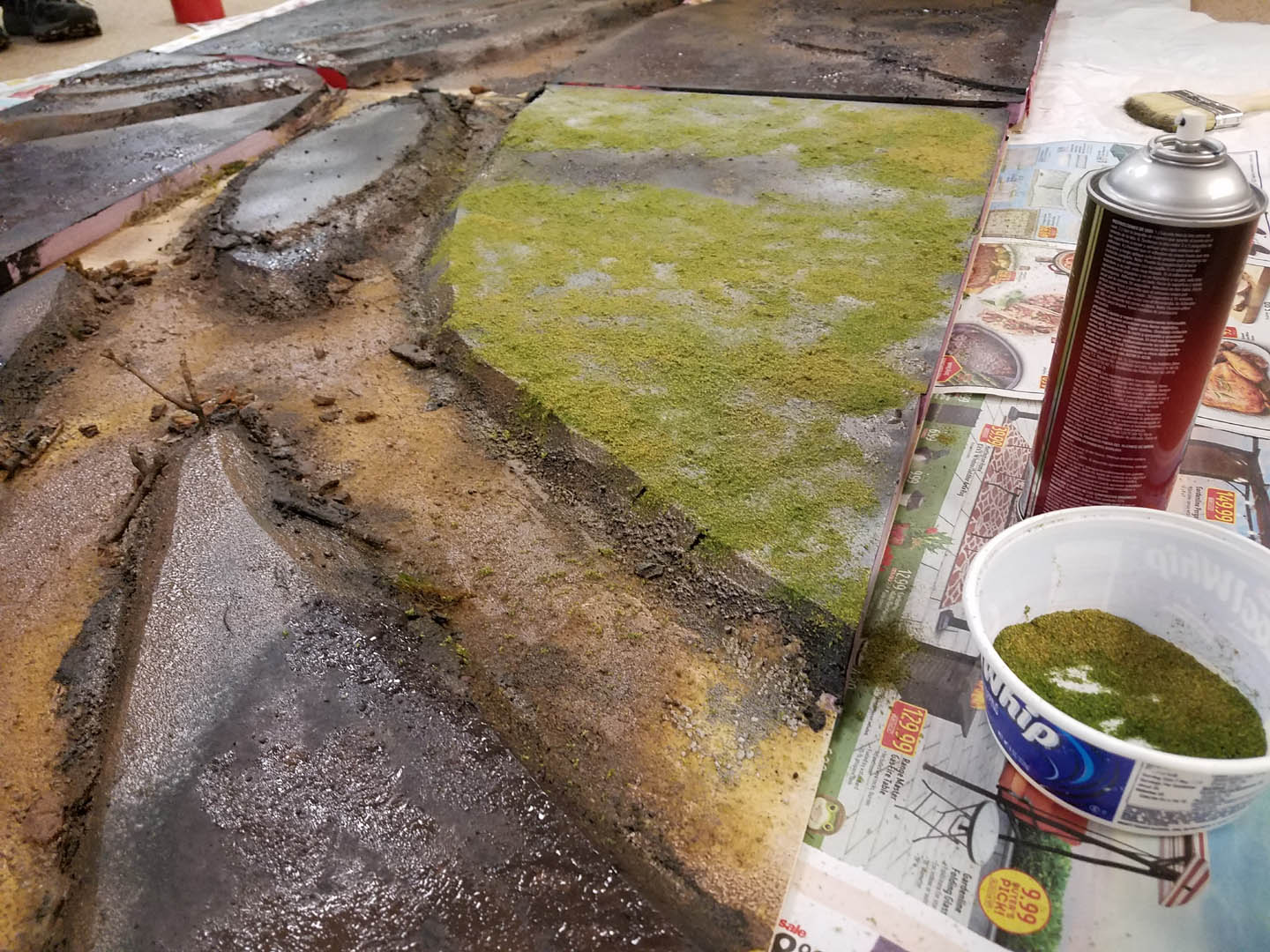 The spray glue was amazing, as it allowed us to apply a nice spread of the flock in minutes rather than hours.  Have I mentioned how little time we actually had to work on this? :-)

I discovered that I could even layer the flock, spraying the glue a second time over the top of one layer, then adding a different texture (such as static grass), and other types. 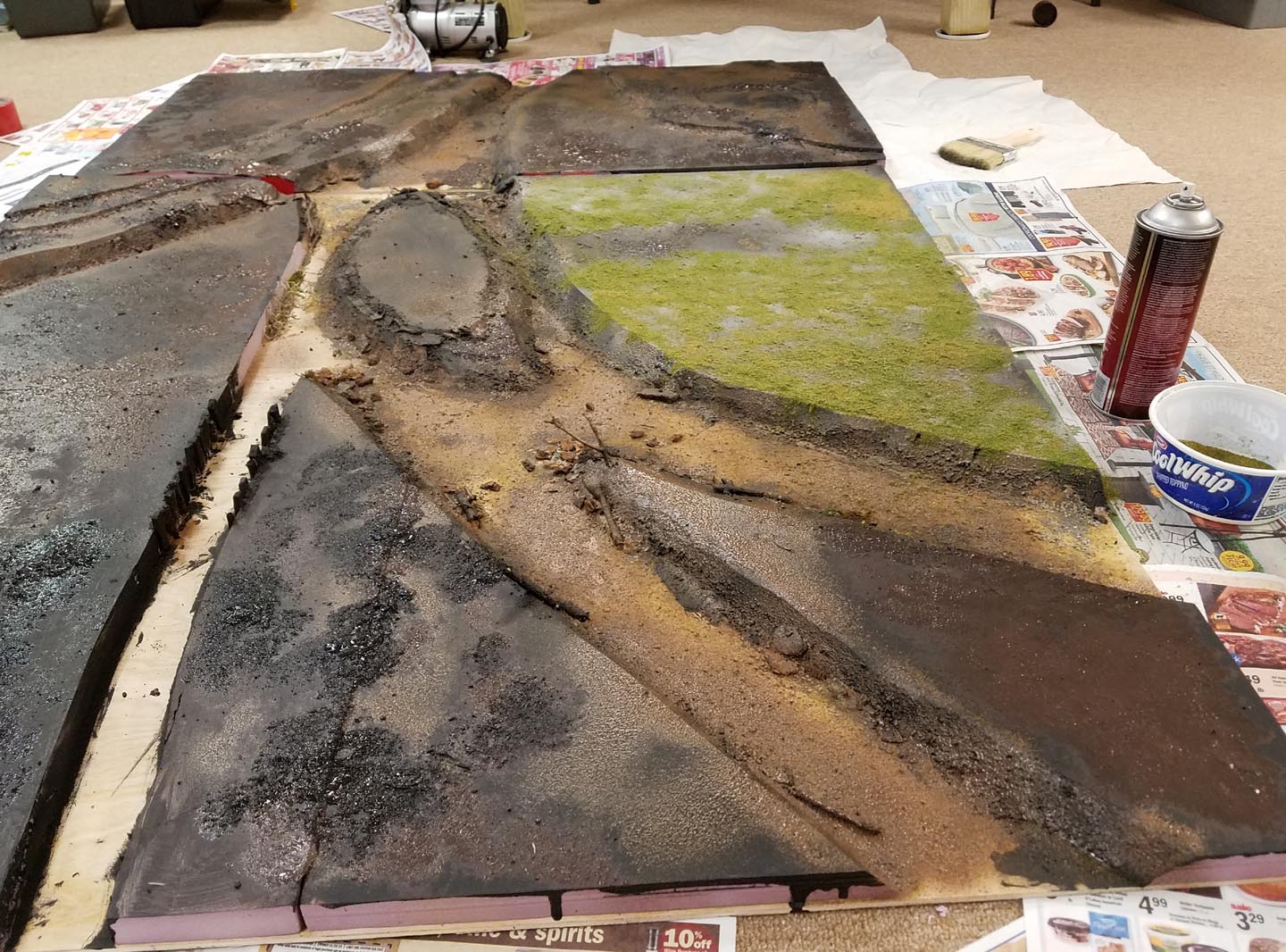 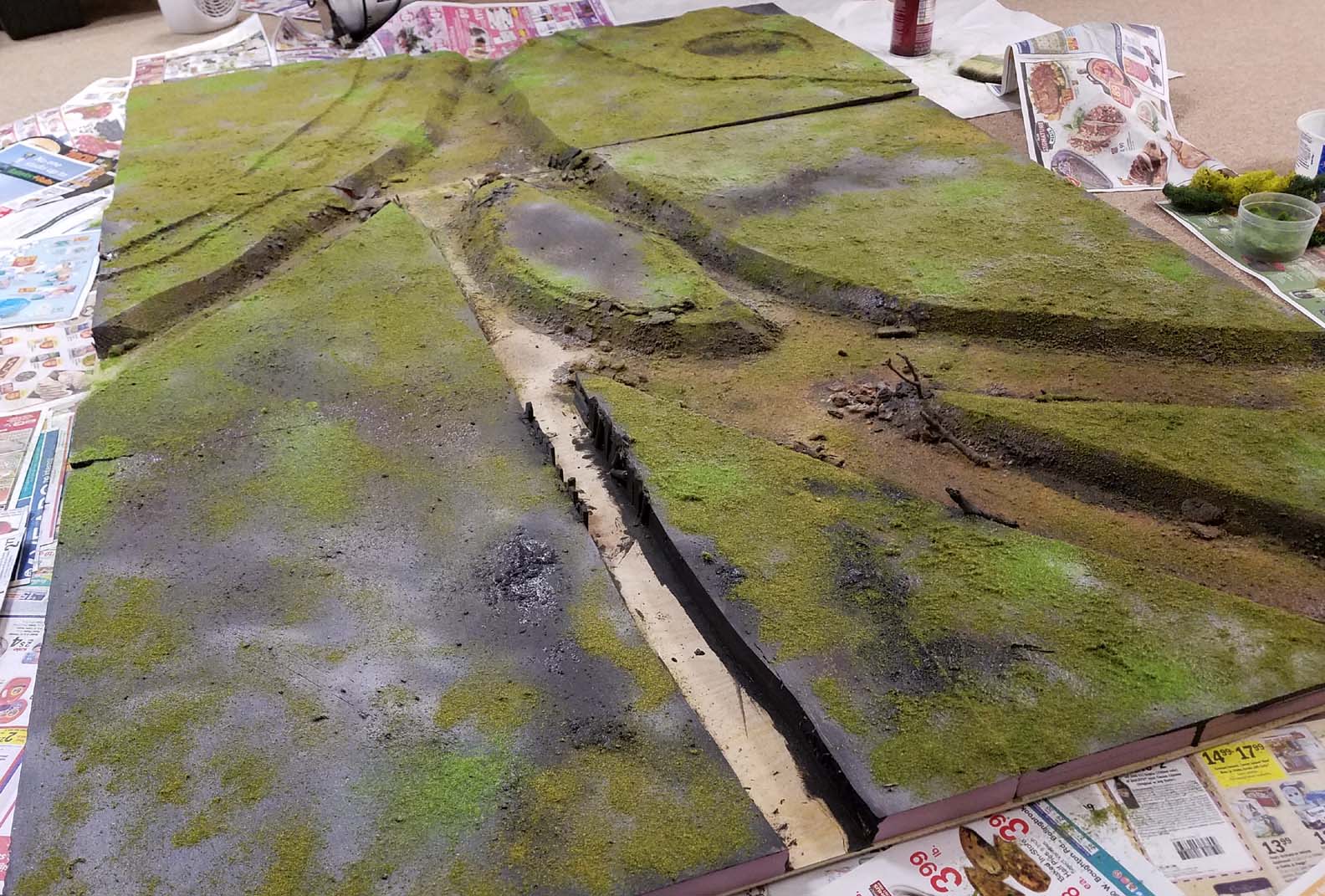 You can see the difference these textures make!

I will say that it can get messy, which is why we had a tarp under this, as well as newspaper.  I learned the hard way to control the width of the spray, working in more confined, targeted zones at one time.  Otherwise, the newspaper would get sticky, and then be carried away on my shoes or even pant leg... carrying a pile of flock with it!

You can see the effect of multiple applications of flock in this ground level view.  When you do add this second layer, I advise that you press that into the spray glue to give it a better chance to stick.

Much more to come on this board, since we have to add reeds and bushes, and then create scatter terrain and water effects!! 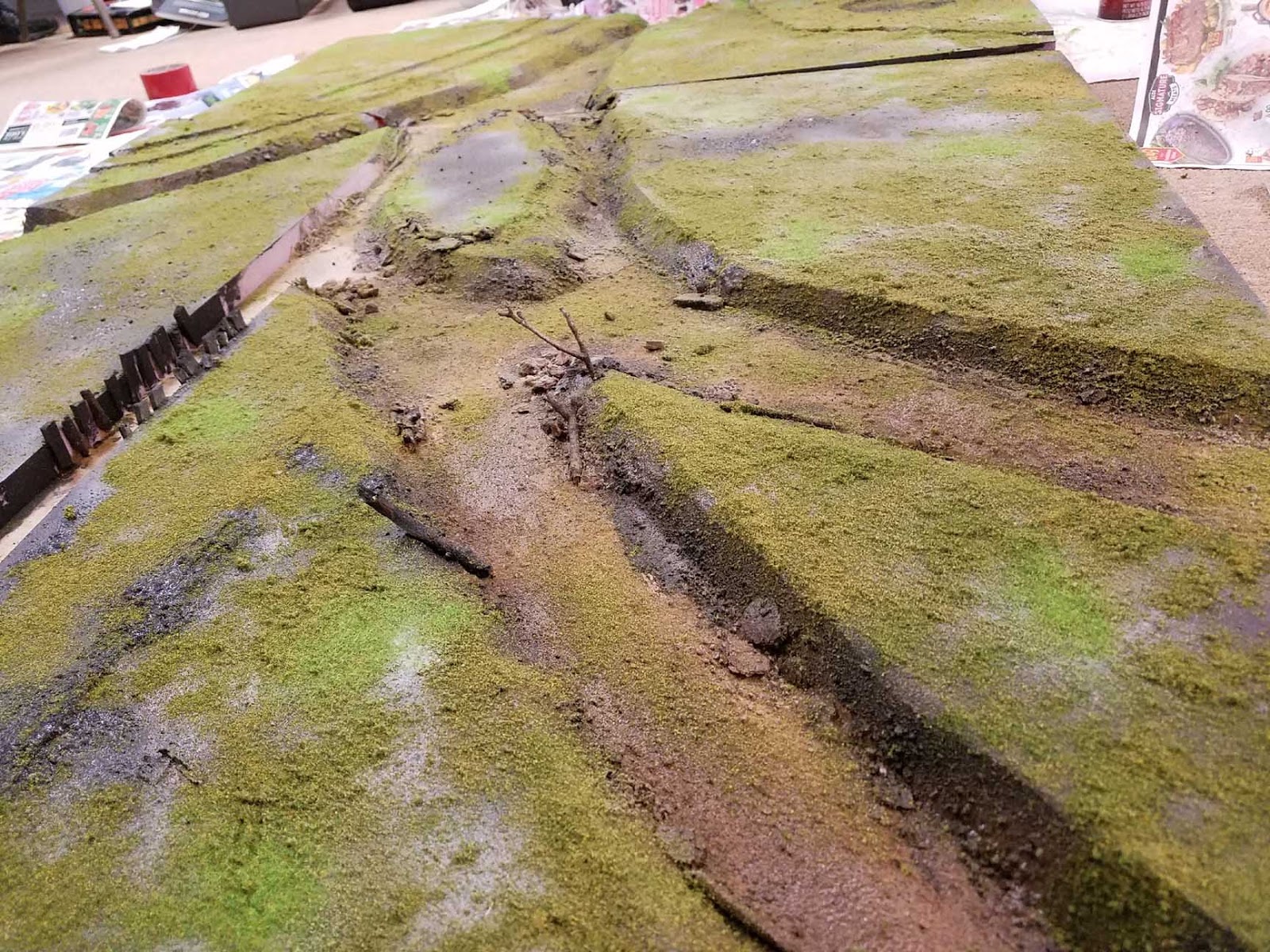