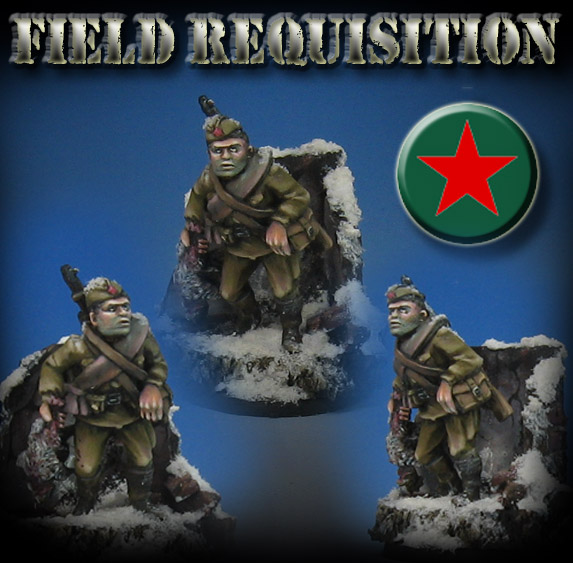 This Soviet WW2 character figure from Black Tree Designs makes a very nice addition to my Winter Russians.  He's out grabbing a bite, so to speak, grabbing a chicken from some nearby village.

One has to keep up one's strength in the winter! :-)

I've done a number of articles on the urban winter basing, using the Sculpey and other materials.  Here's a previous post:

This was painted in regular acrylics as opposed to oils like the rest of the army, since that is what I had on hand at the time.  I will be painting many more of the Black Tree Designs figures, which will let me do some Facebook live, Twitch and other video sessions.

I have more Russian figures coming, adding to the early war period.  This includes Naval Brigades for Sevastopol and NKVD.  There are also some new releases in the mix, with a few HMG and AA batteries and crews.

I am especially looking forward to working on the casualty figures, which should add a tremendous effect on the battle reports.  These will be more than just terrain, they should also provide an interesting post game analysis as I can see where the most bloodshed occurred over the course of the game!

As far as I know, only Black Tree Designs makes that type of figure.

This blog post goes into more detail about the Soviet bases.  I am hoping to do a live session or a YouTube tutorial as I finish off the rest of the army!