Charging on with Oils! 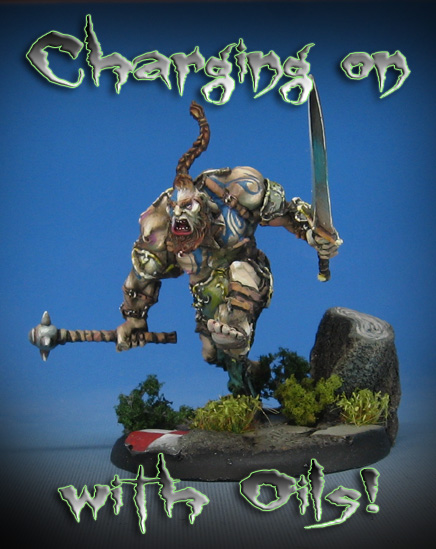 You have heard me talking about the advantages of using oils, mostly in terms of working on very large amounts of figures all at once.  There are also some minor things, such as being able to get paint into very hard to reach areas... even blending it.

This figure brought to mind another way oils can be helpful.  As an old time Confrontation figure made of solid metal, it is very heavy.  By using oils to paint it, I had to "handle" it much less, since the colors are blended right on the surface of the figure.

Had I painted this with acrylics, I would have been working much harder on the skin blends, and even the sword blade.  Doing those blends with oils requires far fewer brush strokes, thus less holding onto the figure.

Not only was the figure really heavy, it was on one foot!  Again, being able to use larger brushes and blending on the surface was a huge advantage.  To give you an idea of size, the base was at least 50mm.

Posted by wappellious at 1:32 PM 2 comments: