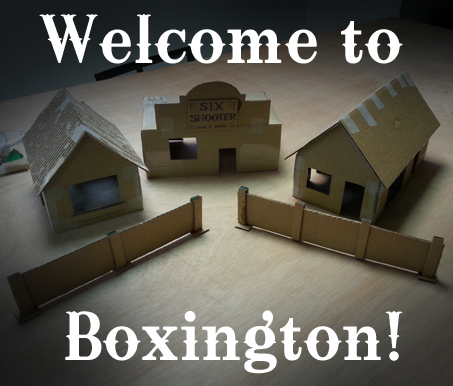 It looks like my MacGuyver reputation has taken a new leap after this emergency project the other day.

The situation:  Away from the studio, and must put on a decent sized demo game in a few hours.

What you don't have is enough terrain. 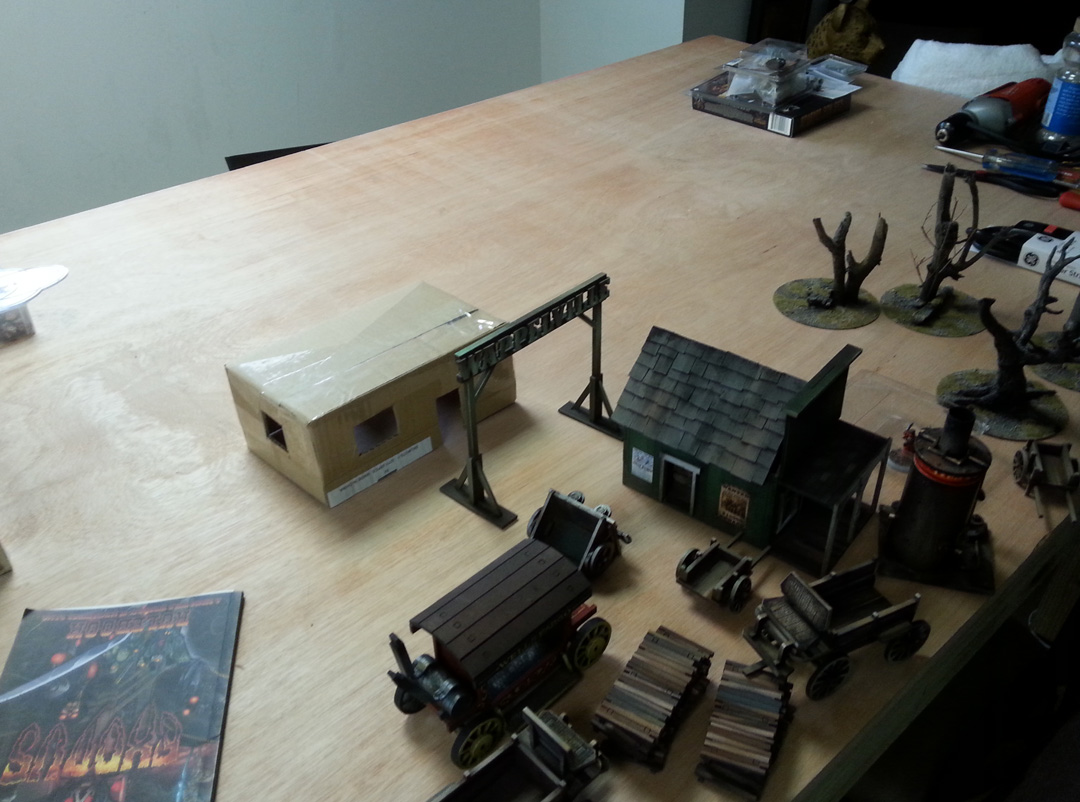 What you have are a few boxes, such as this one that I use to carry my magnetized figures.  However, even this wouldn't be nearly enough. 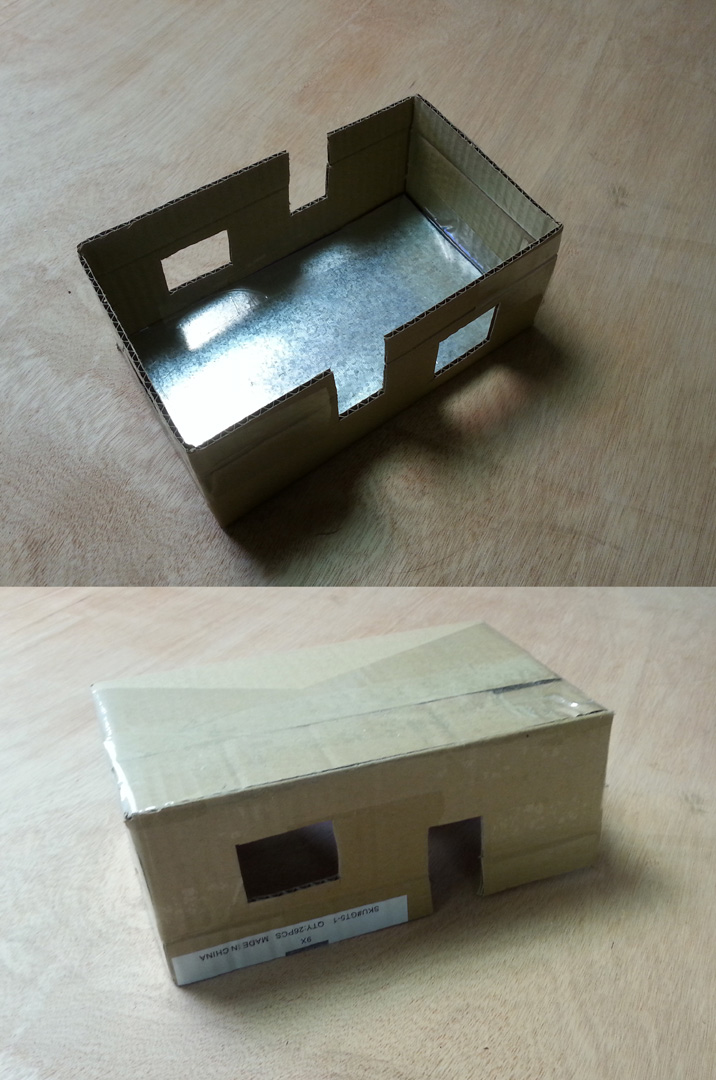 Now I have a bigger box, some tape, a tube of super glue, and a pair of scissors.  And sunglasses. 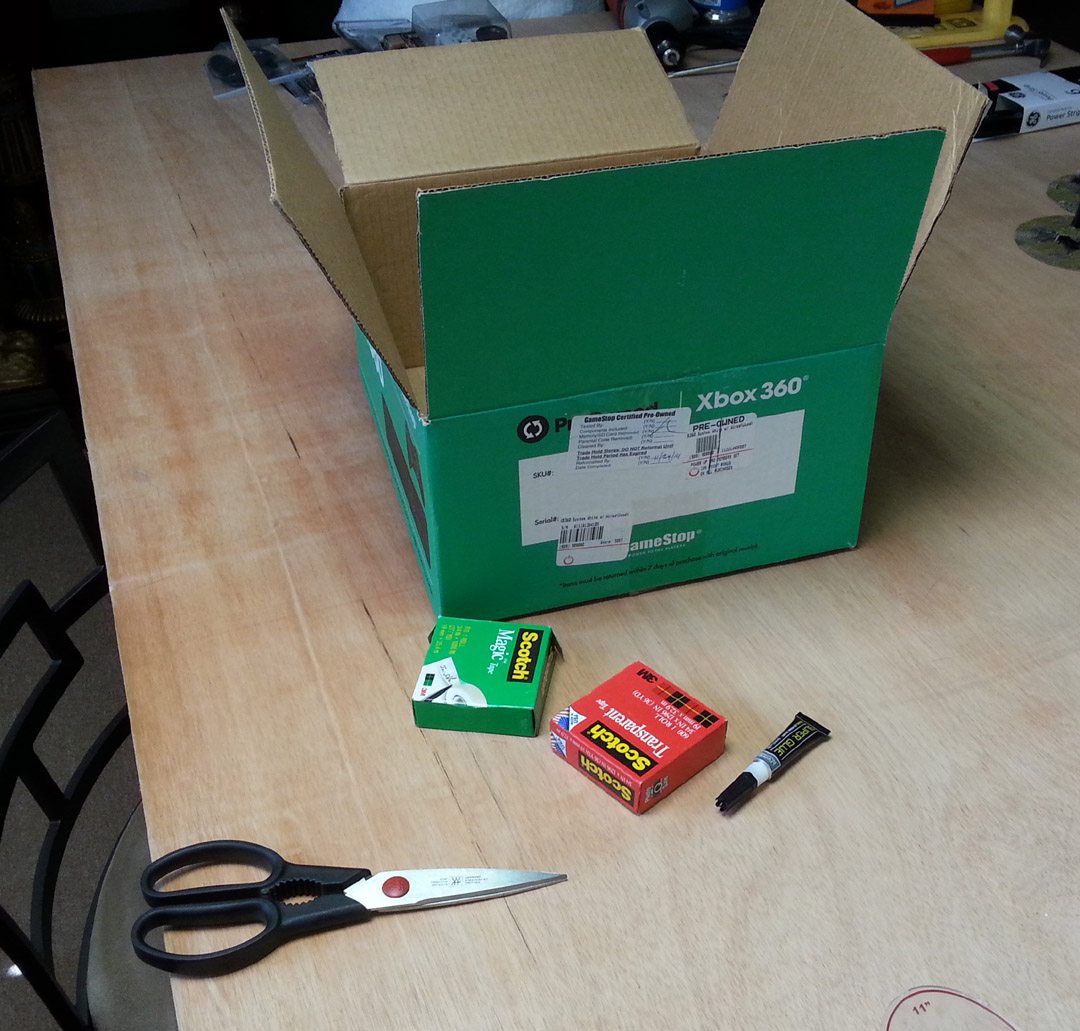 The box is quickly broken down into panels... 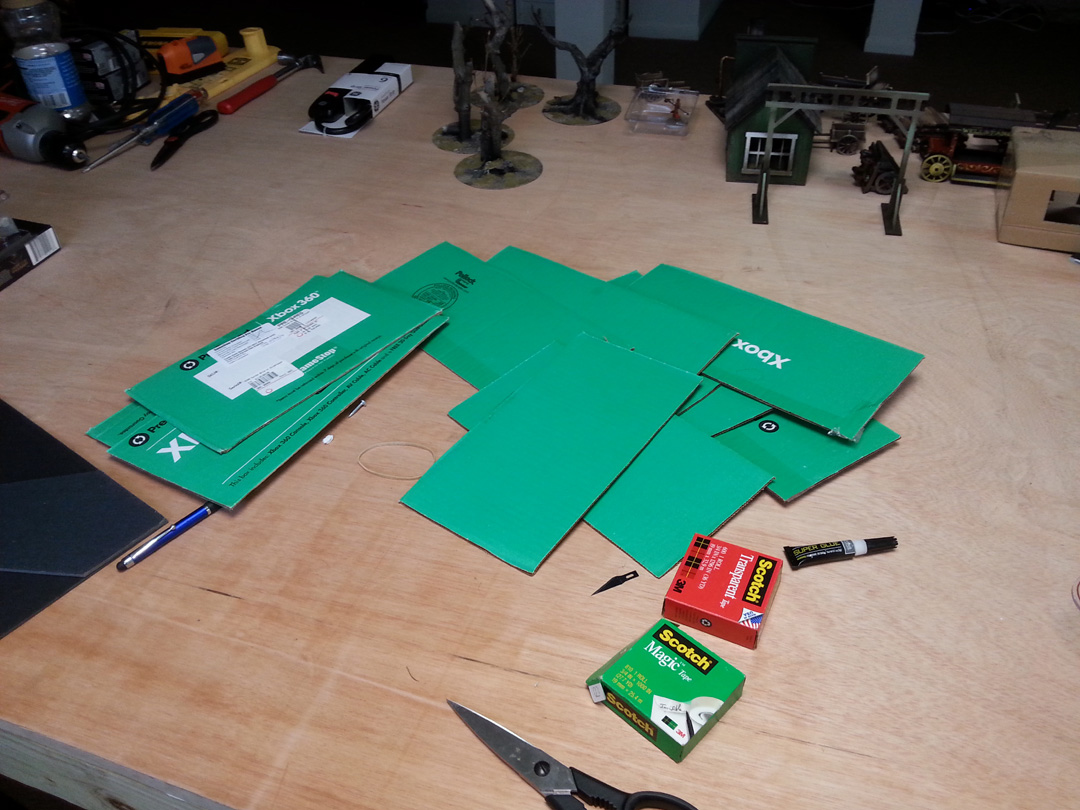 Which must be turned into buildings in a matter of minutes.

Those of you who have seen my "Home Sweet Home" terrain building video might recognize some of these steps, such as creating the roof angle and wall height. 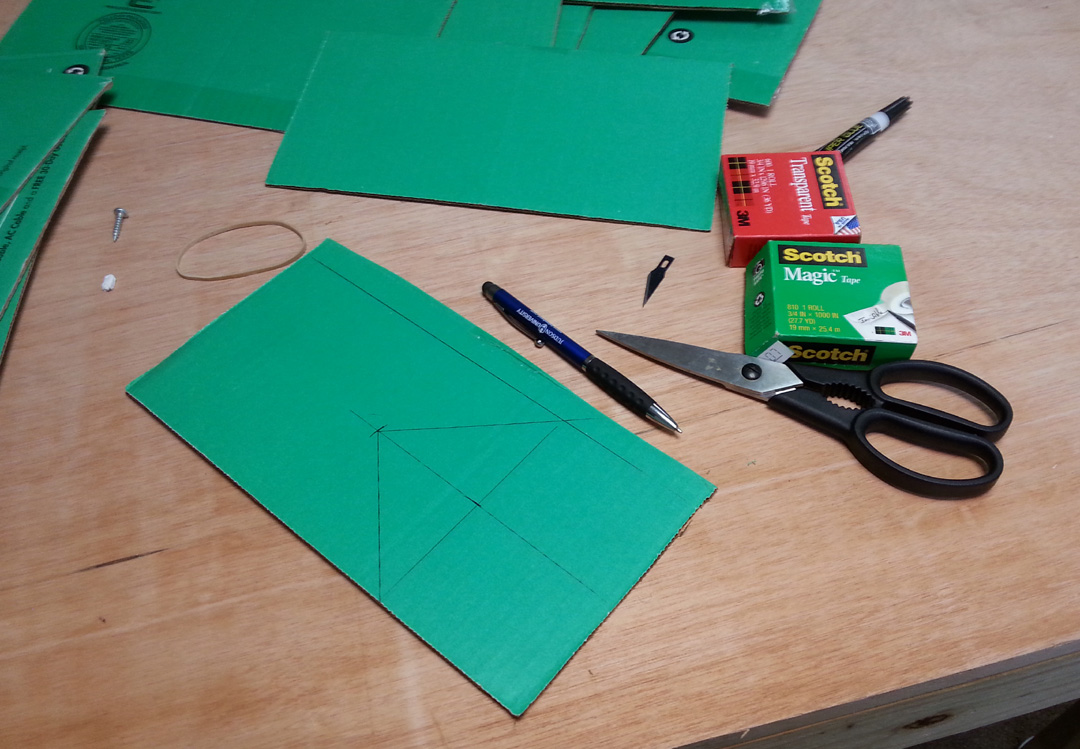 Front and back pieces are cut, but we need some doors and windows. 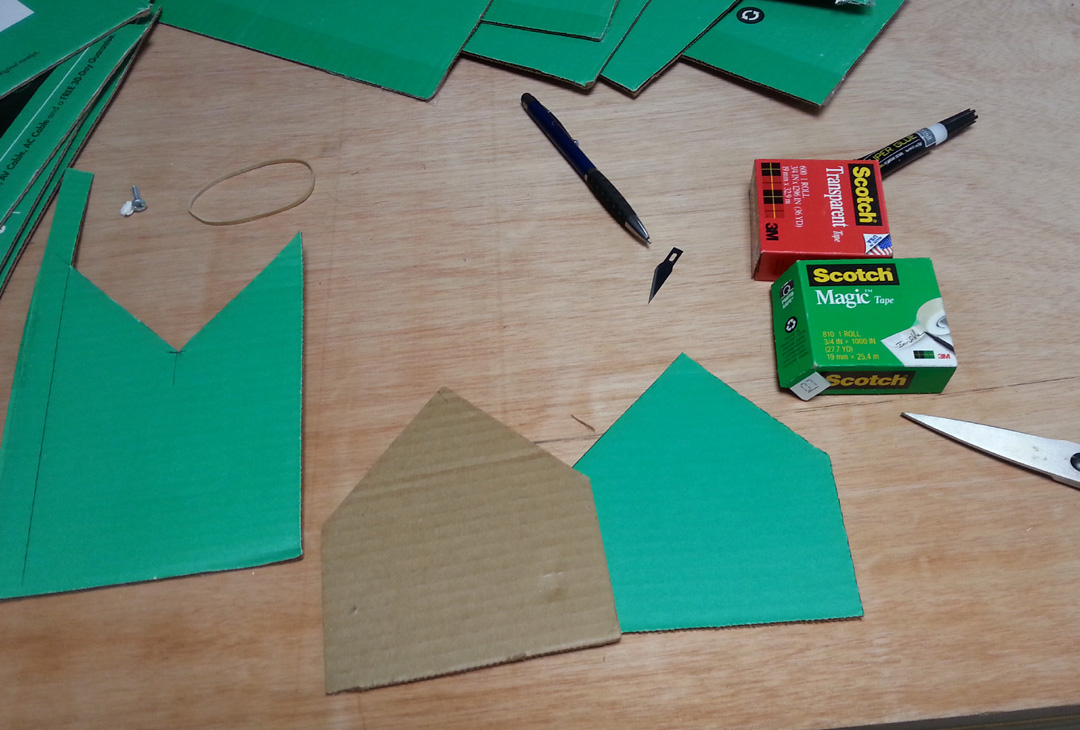 The side pieces are cut a tiny bit shorter than the sides of the roof gable sections.

I learned the hard way long ago that if you don't do this, your roof will hit the top of those side walls and not set correctly. 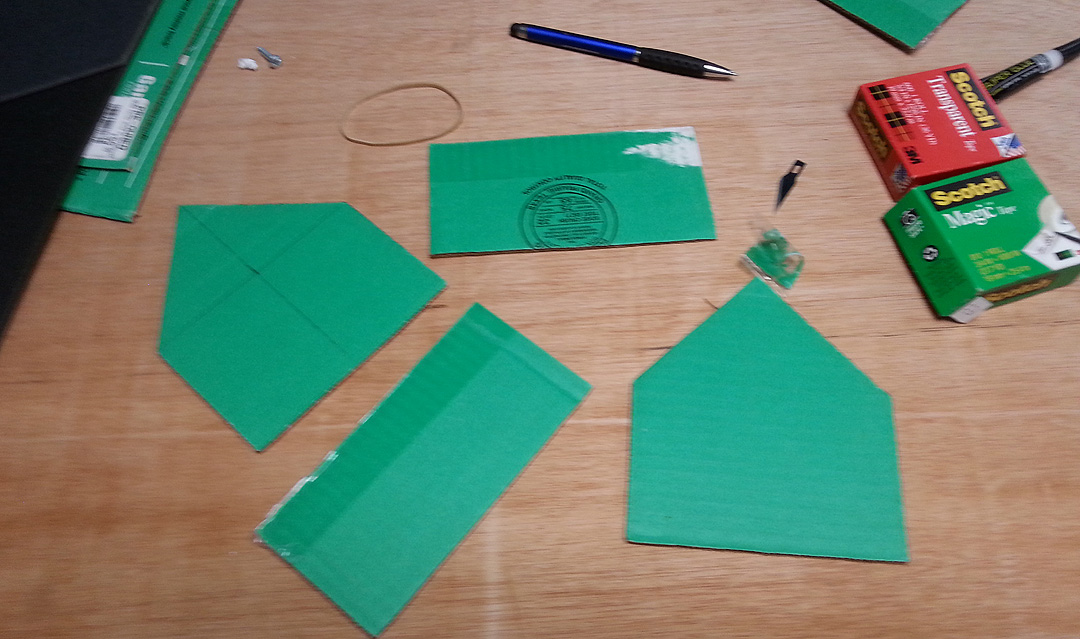 A handy exacto blade lets me cut those windows, set to match the height of the WWX figures in question. 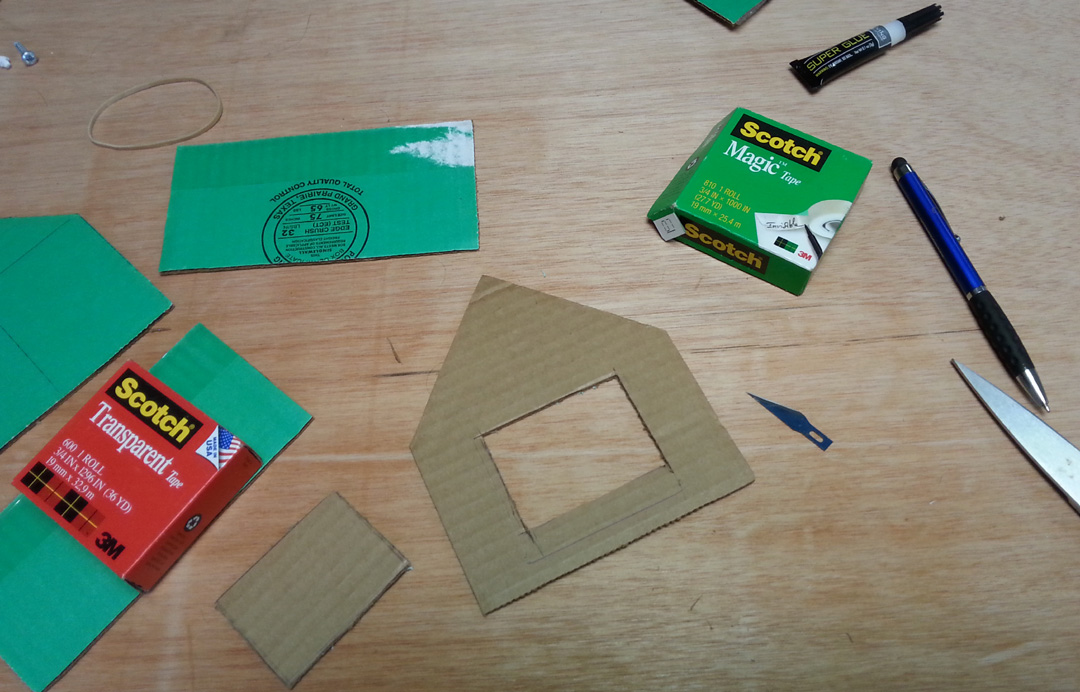 If I had more time, I would have tried to fool around with decorative elements such as window sills and shutters.  However, time was way too short for such things.

The tiny amount of super glue and tape would have to be enough to attach the wall segments together. 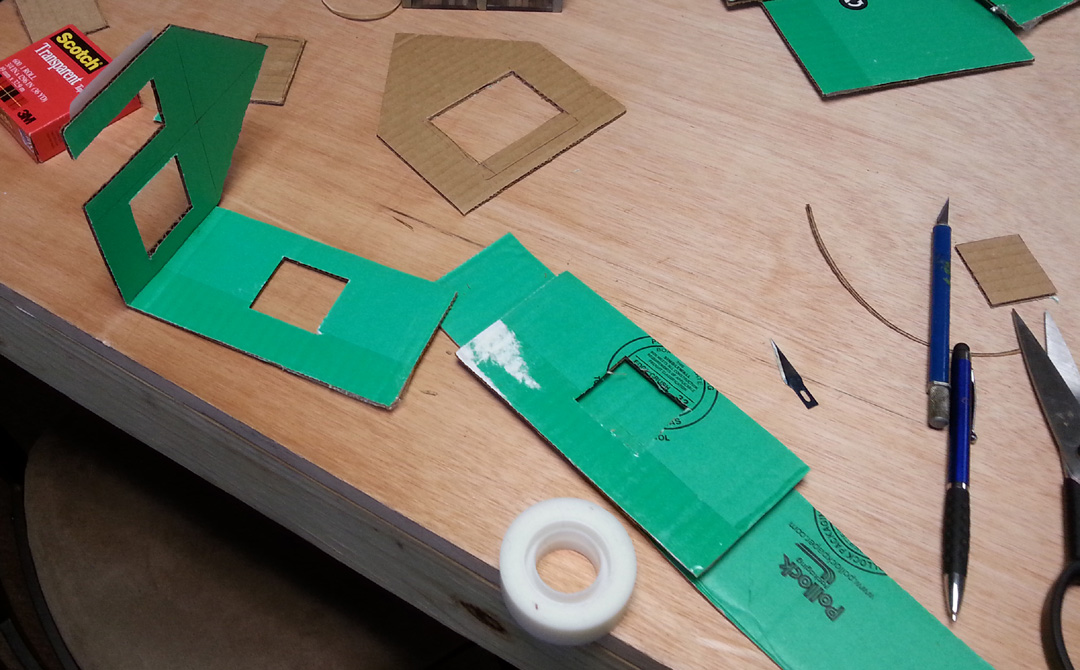 Just about there!  The next set of images will show how a removable roof was created, a second building, and even some fences.  I think I have a few shots of the buildings in use as well! 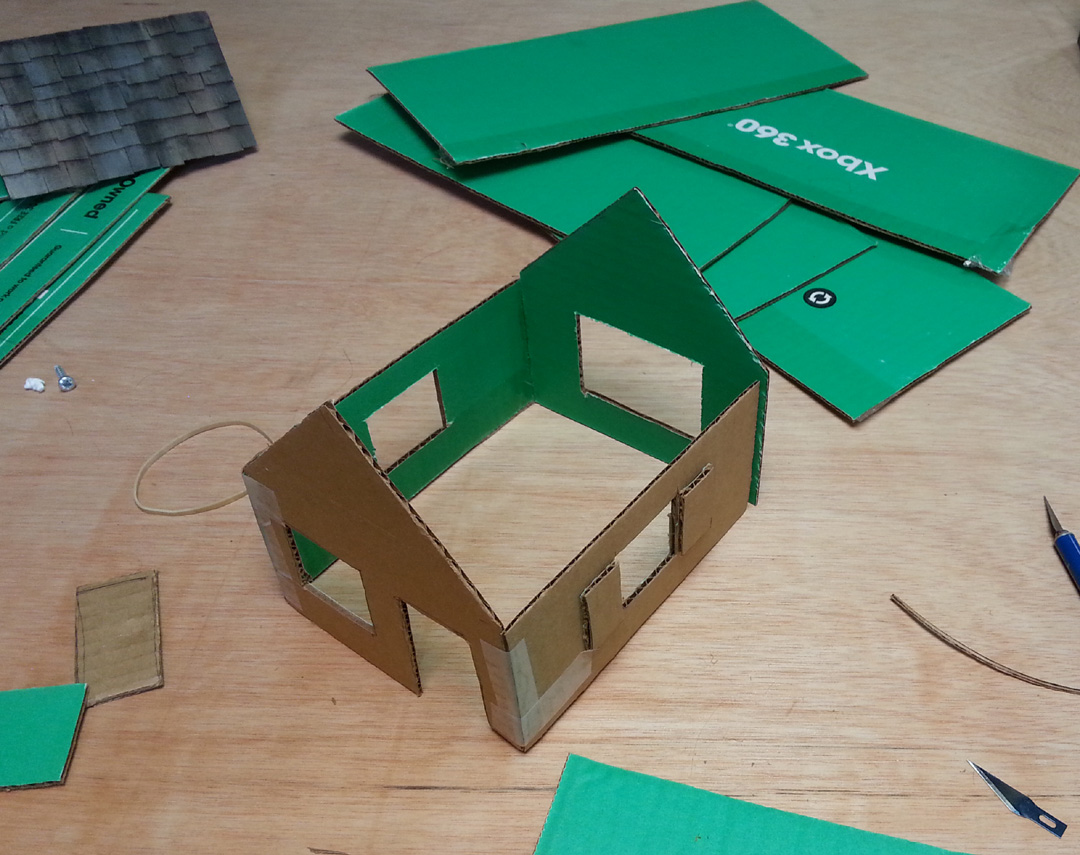 A stroll in the woods 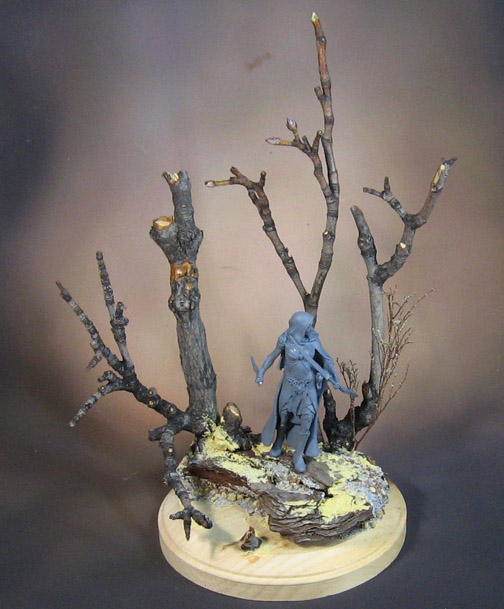 Here's another stage completed on the diorama base.  I added additional texture to the Sand Paste by gluing some more ballast.
Not only does this provide that extra texture, it also gives a little more structure and strength. 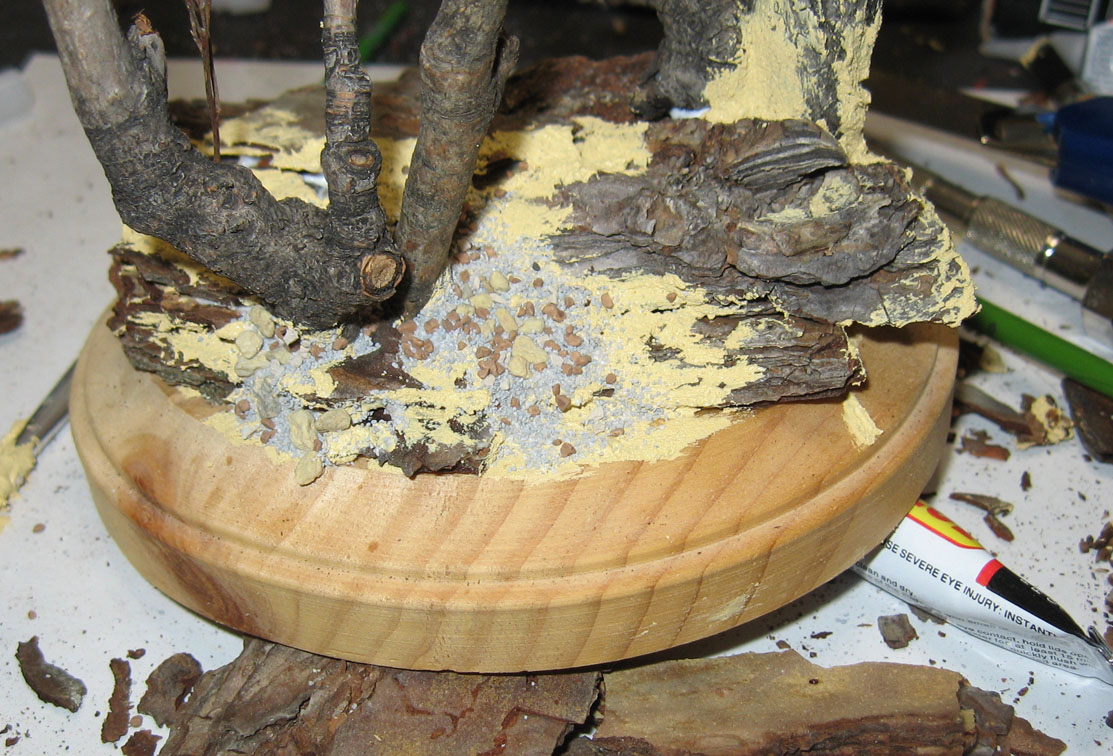 This gives the incline a nice cascade effect. 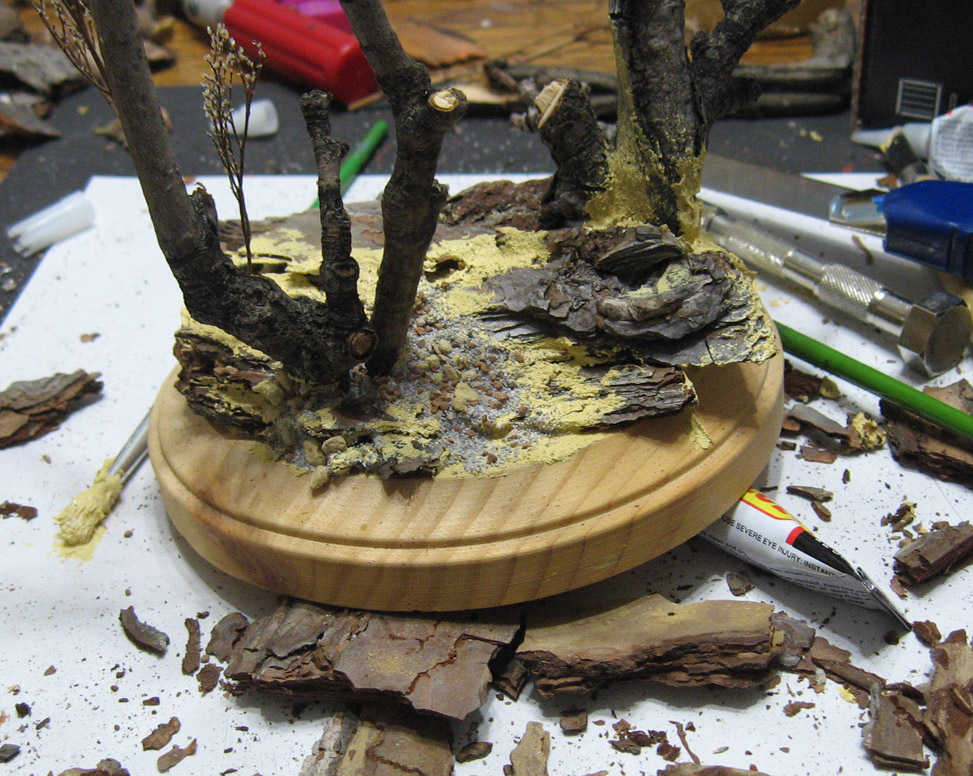 To help establish the water effect out in front, I thought I would add some pieces of wood, like the little stump in the corner. 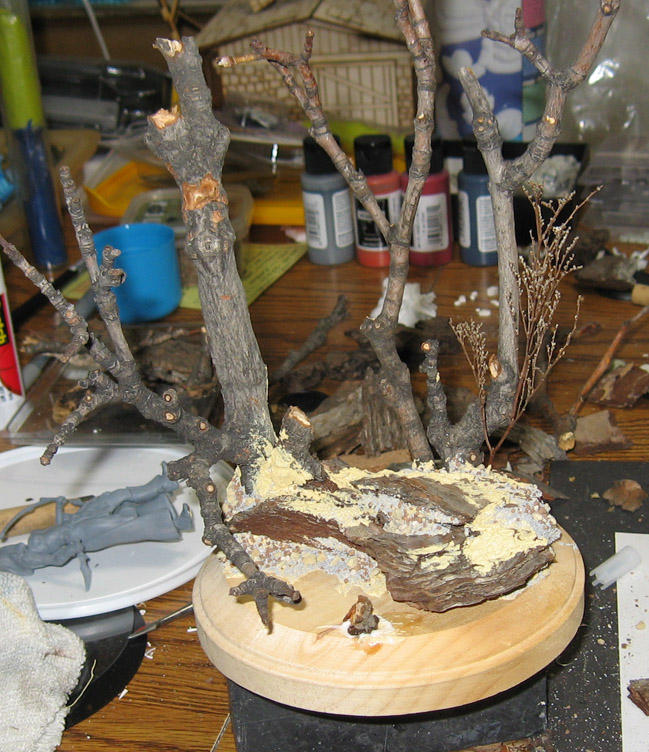 This is what we have so far.  I will be using mica flakes and some other leafy textures, since I want to establish a fall theme.  The water will also have leaves floating in it, which will be an entirely new effect for me!! 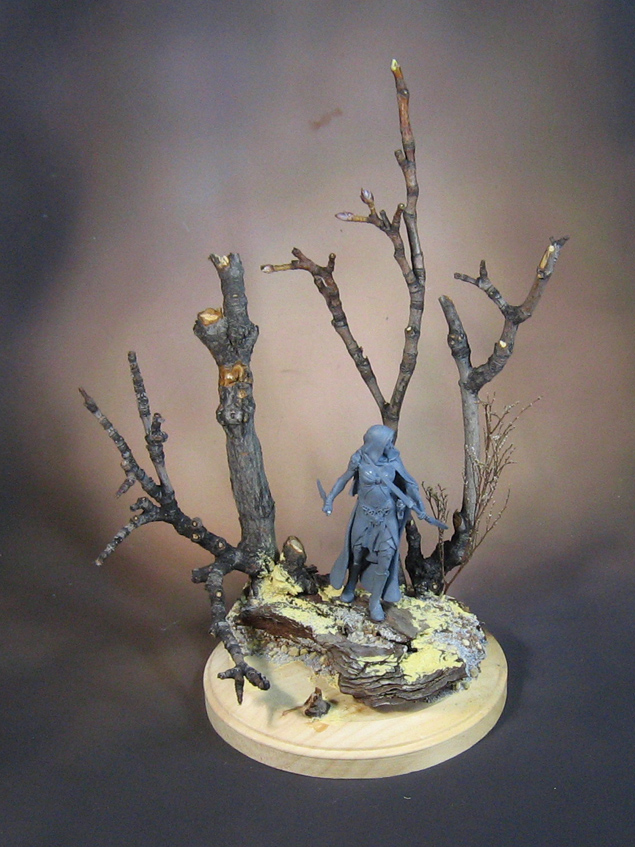 As I mentioned in the previous post, I am going to add more of the small branches.  A few will even be added to the main trees. 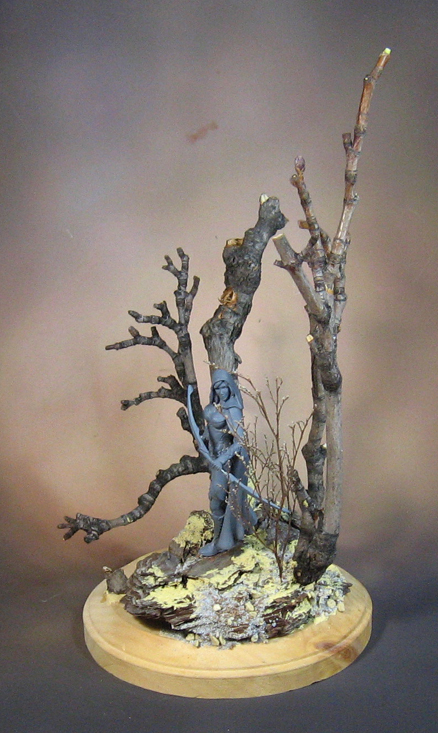 These next few steps are going to be more chaotic.  Parts will be getting painted while additional effects are added in.  It will also be super messy!  So, get ready... it's gonna be a wild ride!!!! 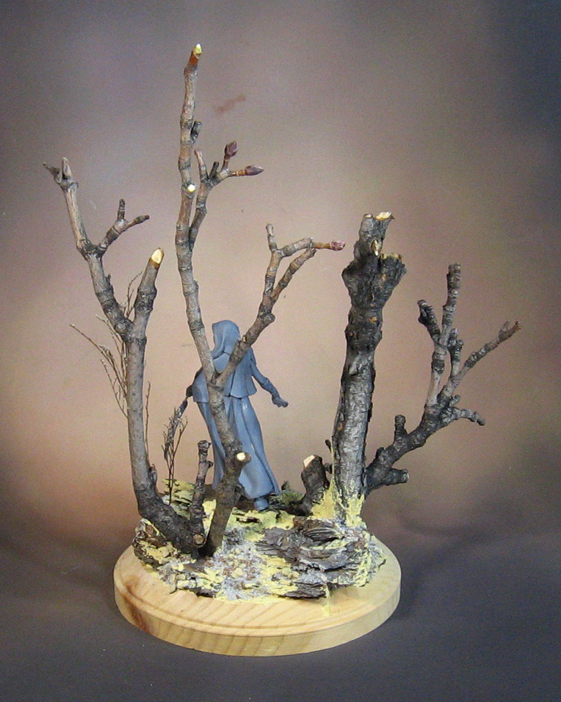