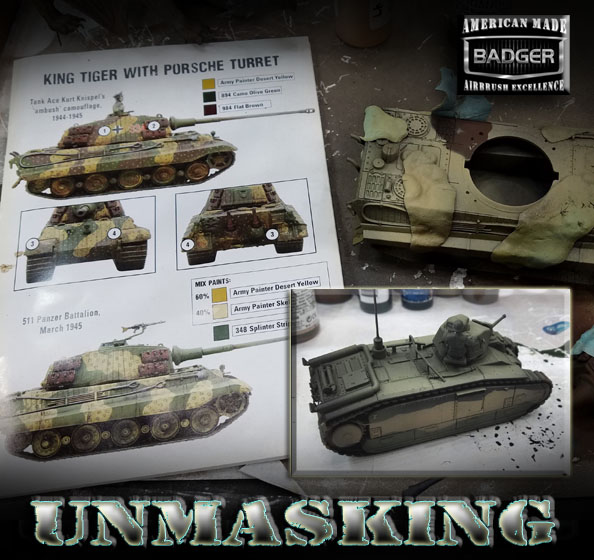 In addition to all the Busts, there were a number of vehicle painting demos.  I tried to show how I go about using the airbrush for my regular figures as well as things such as vehicles. 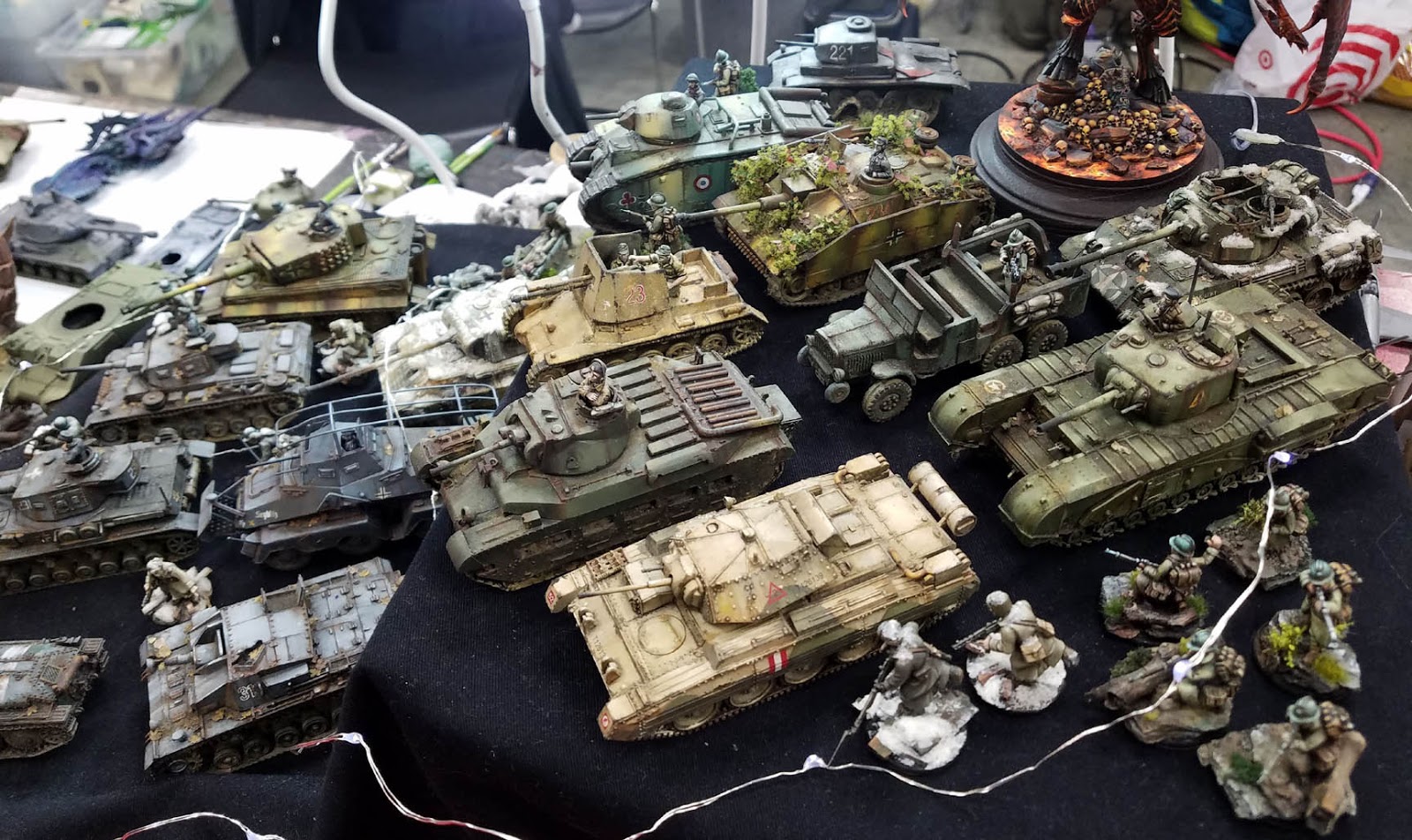 One of the things I discovered a few years ago is that Blu Tac works very well as a masking material!  I was already using it to attach figures and vehicles to paint jars and other things, so I was pleased to see that it could perform this task too! 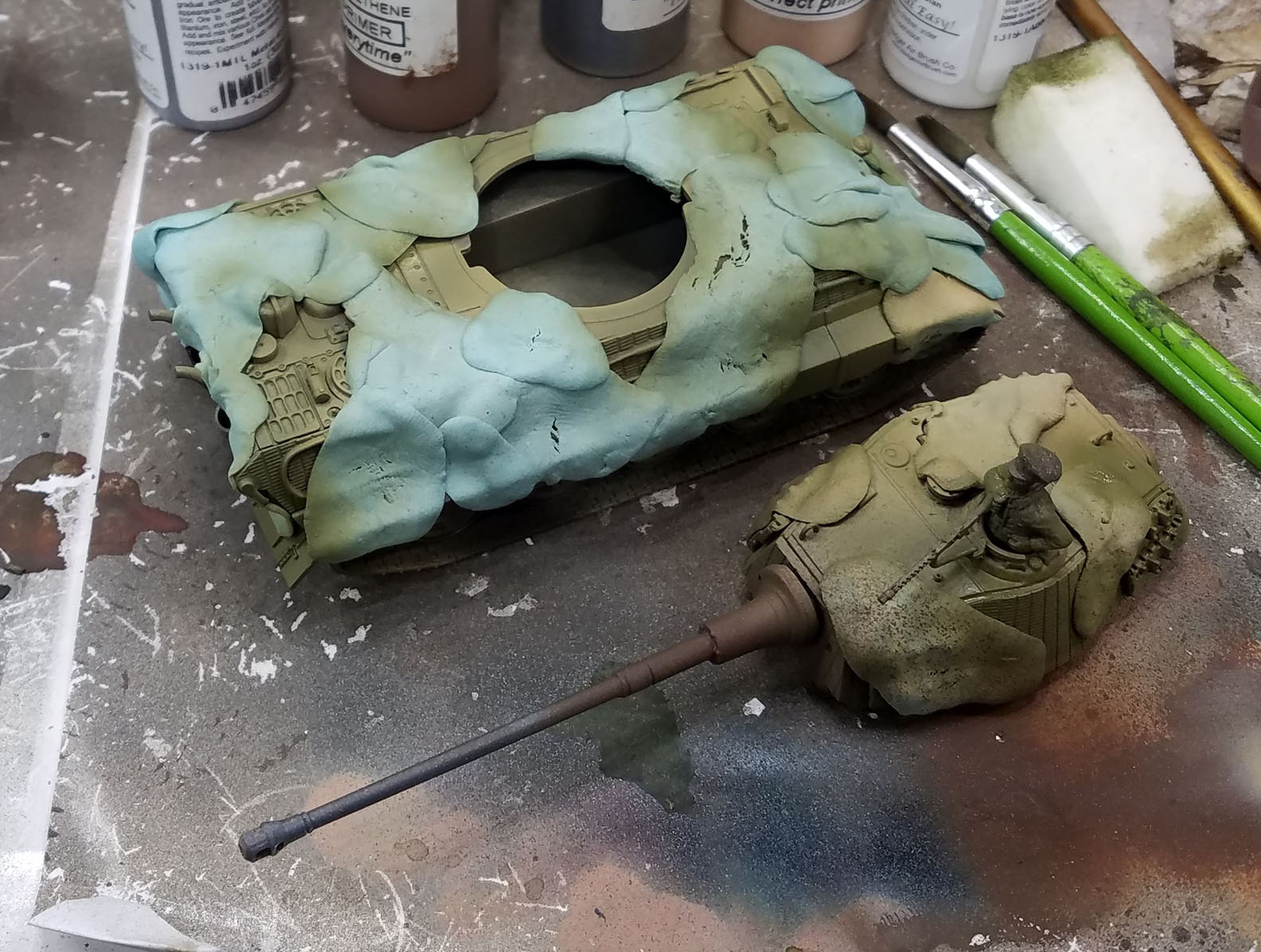 I have the King Tiger platoon box from Warlord Games, and I am trying out some of the color schemes from the Ardennes and Hungarian theatres. 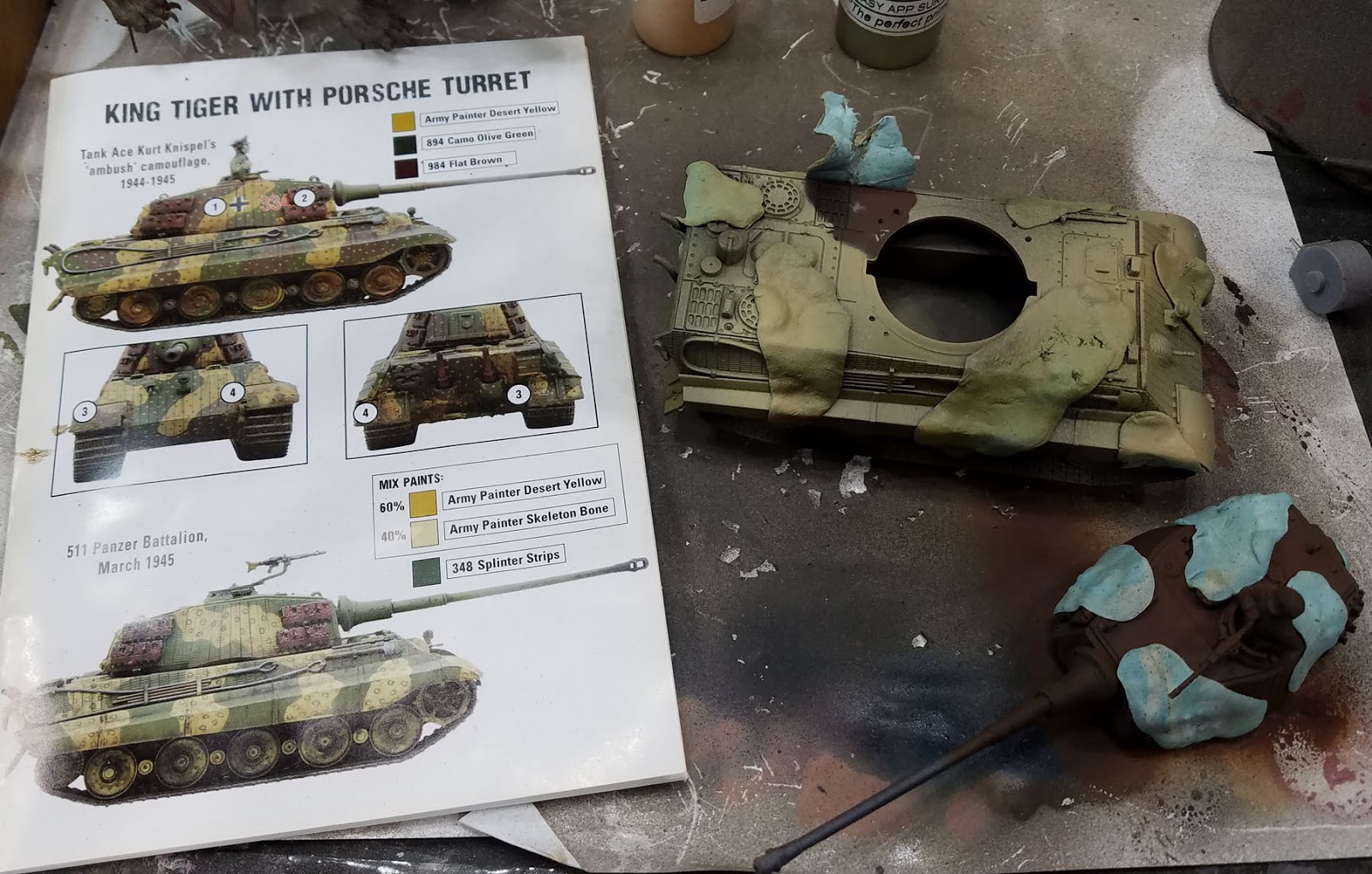 The Blu Tac does not leave any residue, and it does not tear away previous layers of paint.  Really handy in multi colored schemes like this.  By working the Blu Tac a bit, the paint seems to work its way out of the compound... 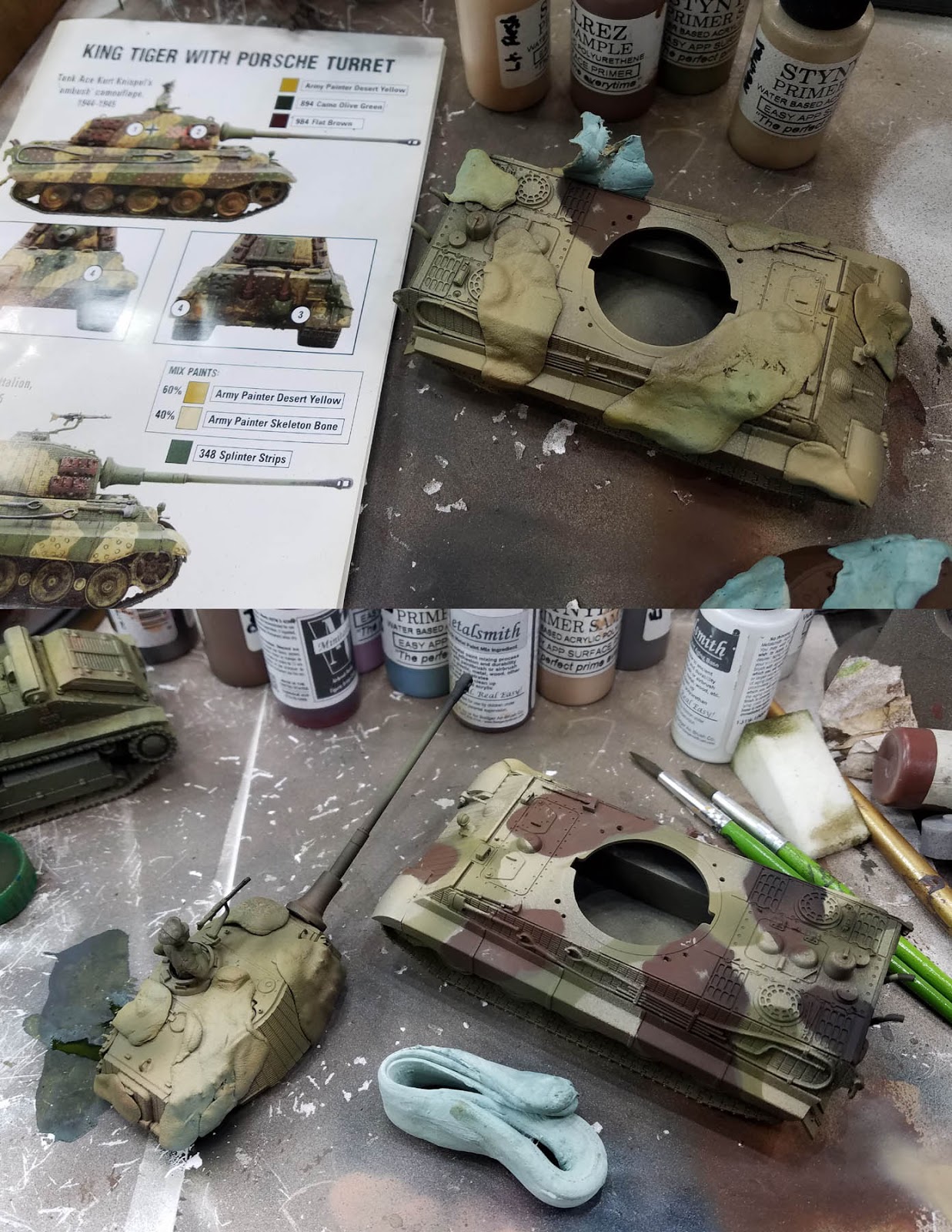 I also worked on some Dunkelgrau vehicles, and then some which required green.

As most of you already know, I love to use a series of Stynlrez primer colors for the initial layers on all my vehicles.  There are 12 colors, so that means I can match just about anything I might need!

This also means that I can have a very solid base on which to add my subsequent layers.  Very important when you will be handling these all the time and rolling dice into them. 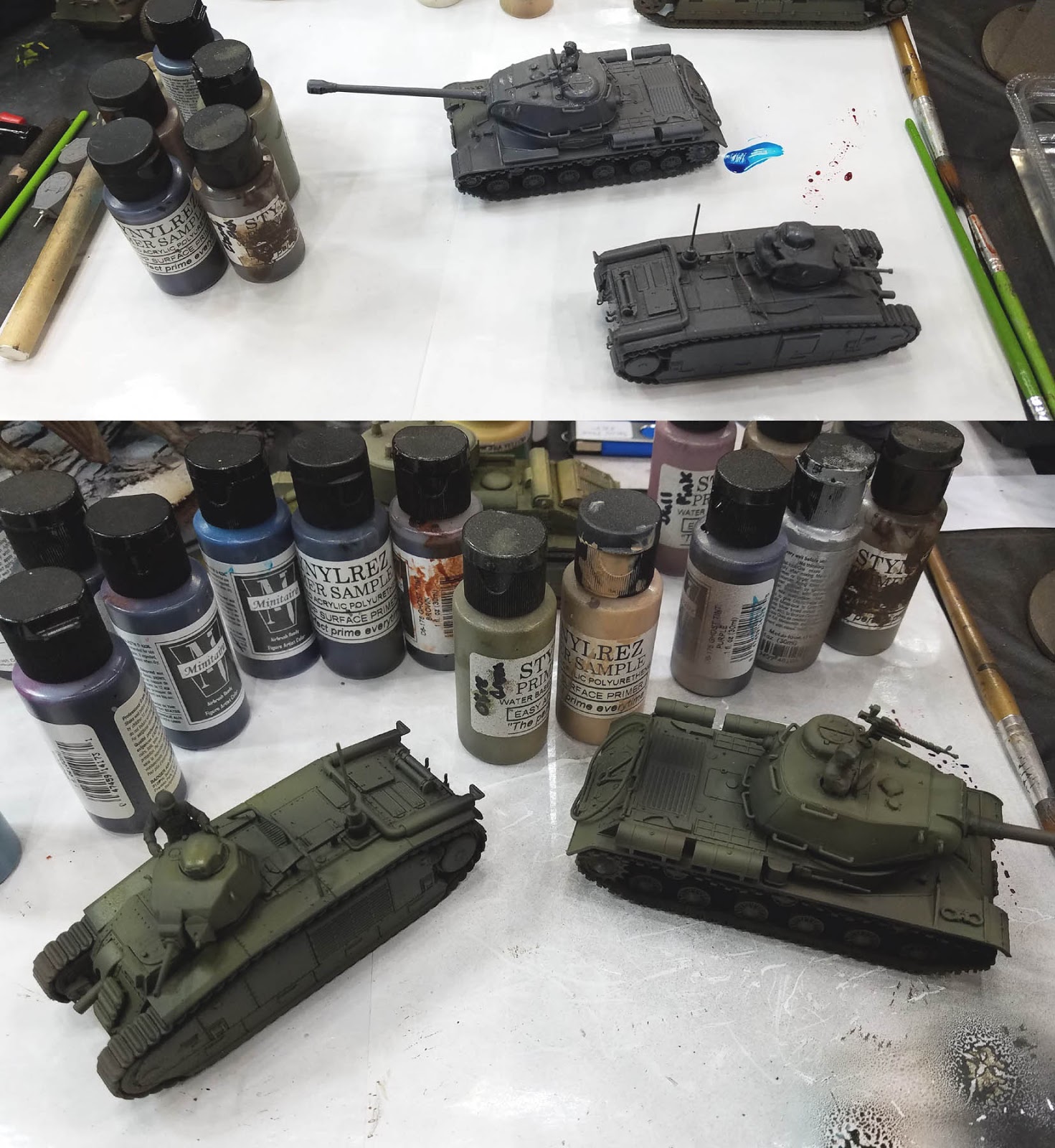 I needed some specific markings on this Char B1 Bis, so out came the Blu Tac.  Once I had the areas masked off, I could spray a few progressively lighter layers or ochre colored primer... 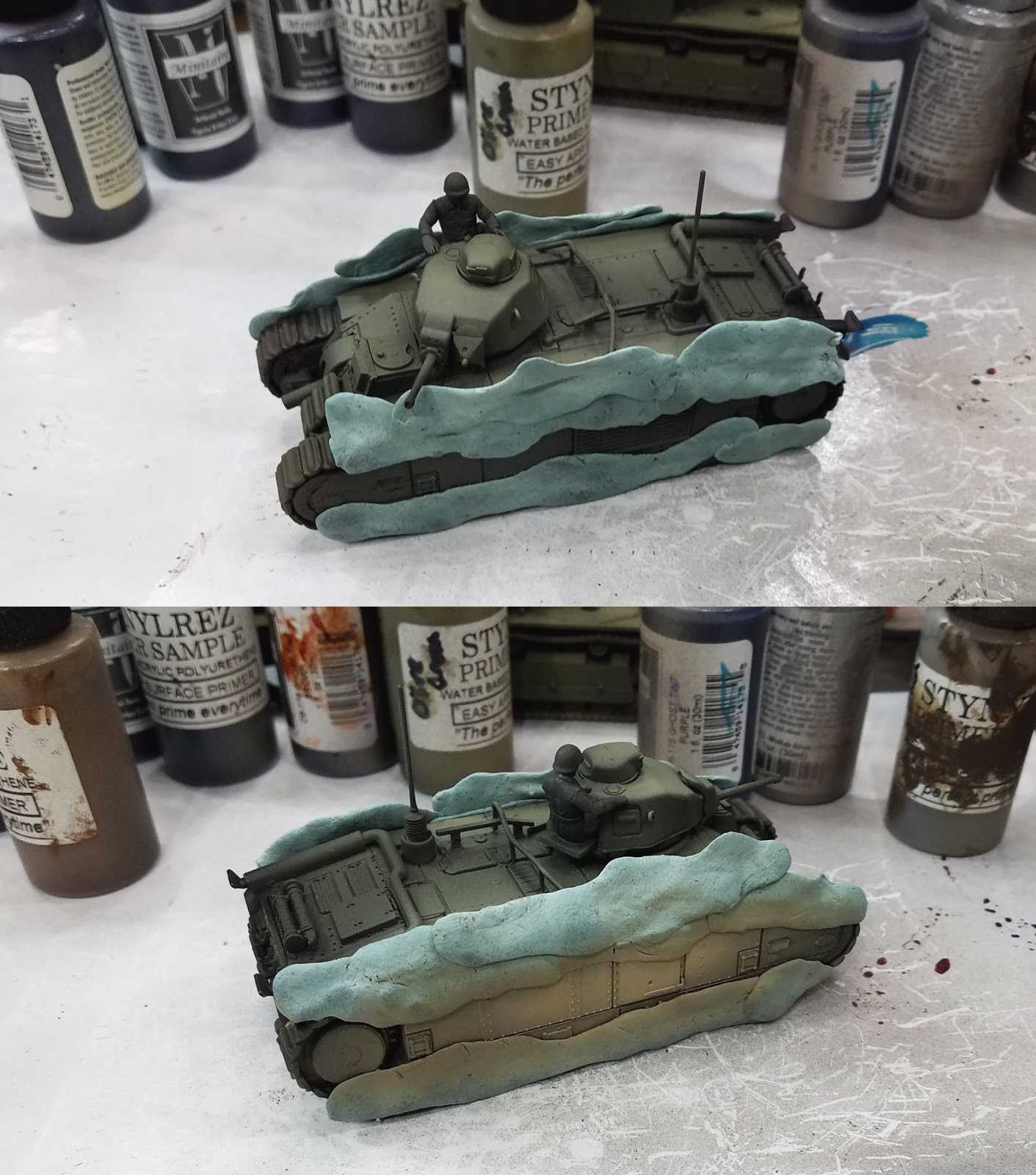 Take it away an Poof!  All set for more glazes, weathering, staining, etc. 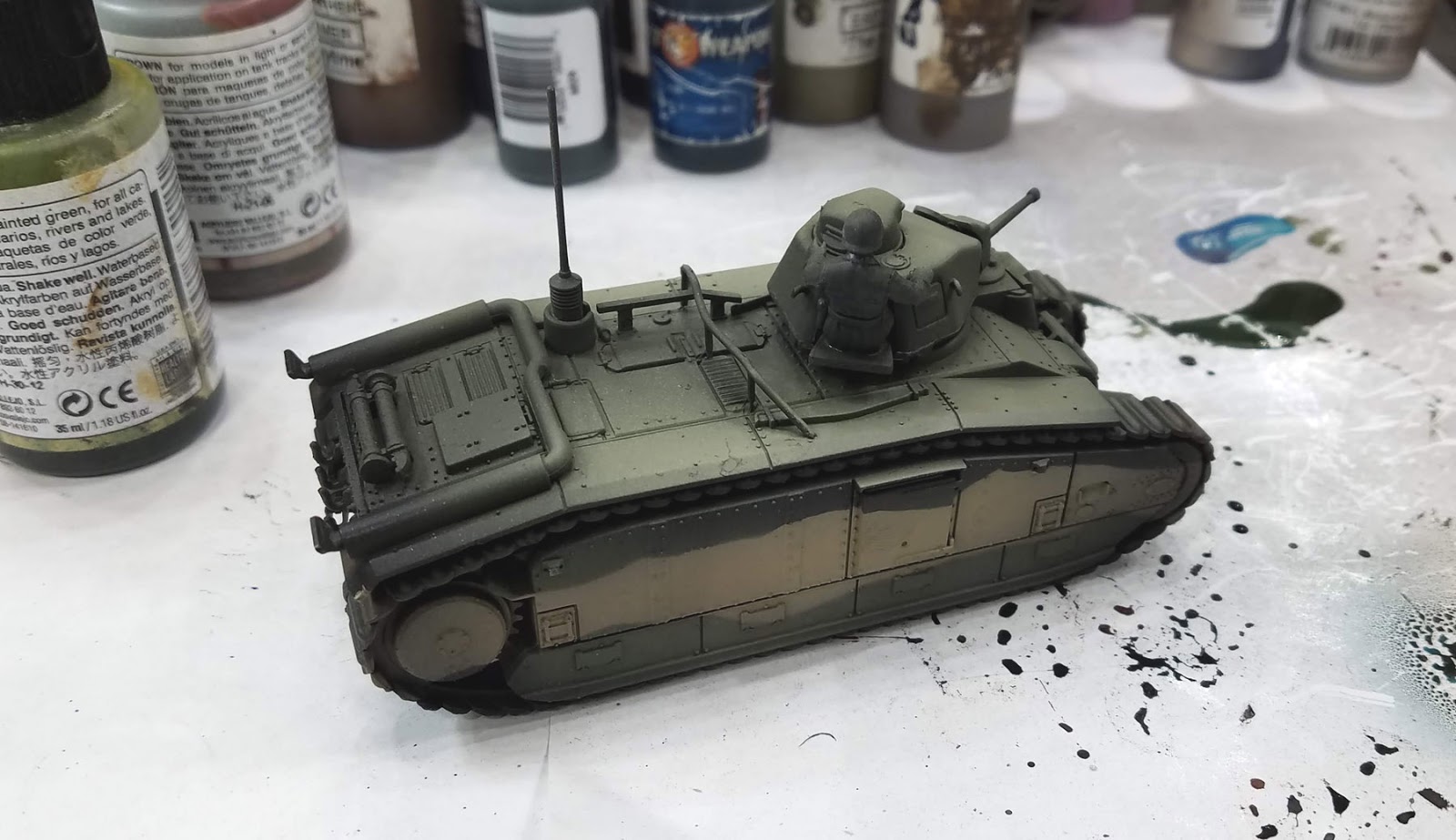 I had used the same set of greens, browns and rust colors on a late war Soviet IS2. 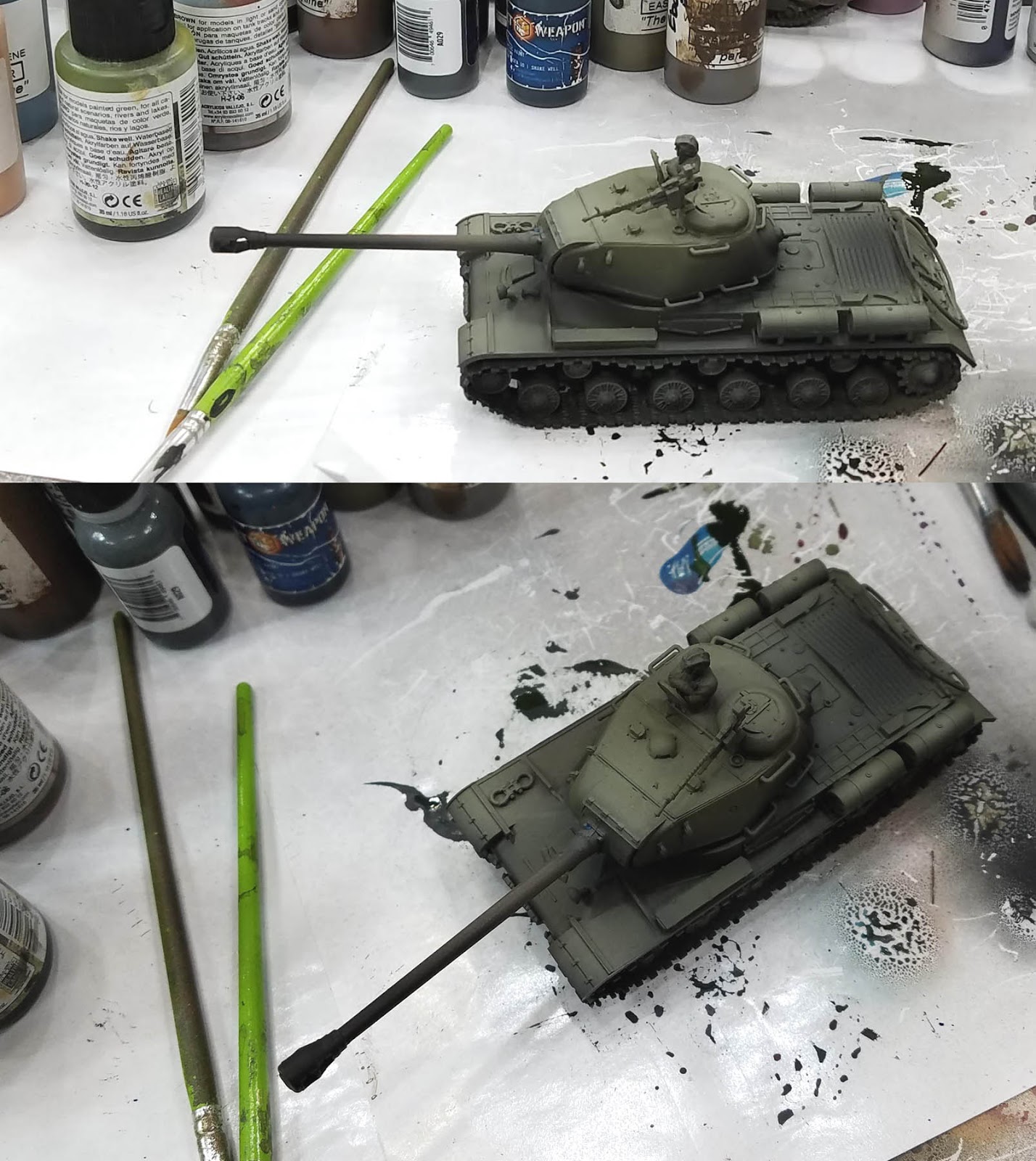 I tried to emphasize how I have as many things on the "Priming block" as possible, because you never know when you might need that color somewhere else.  For instance, I was also priming the new Sherman Crocodile, new US Infantry figs and even a Mierce Miniatures monster! 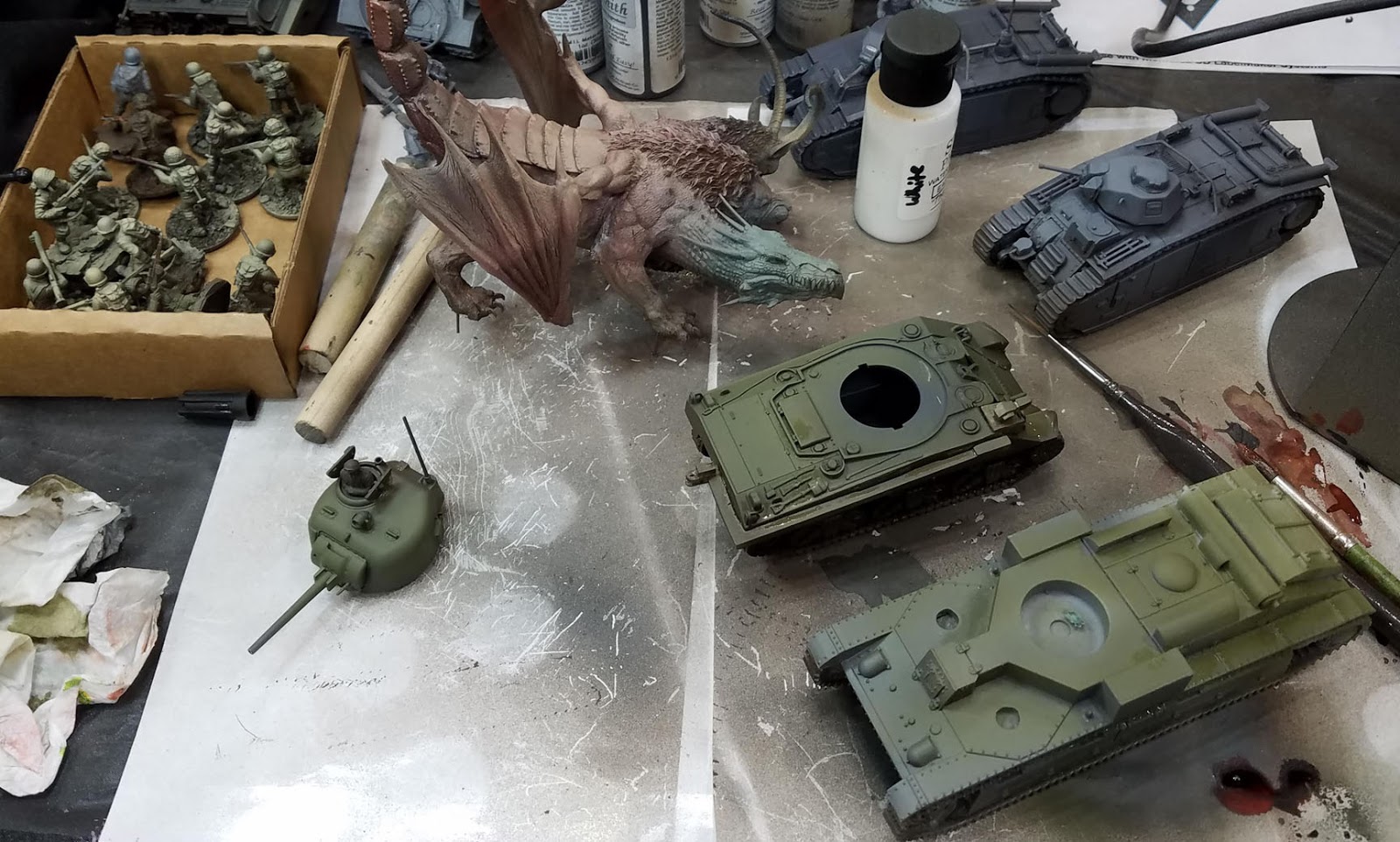 While this camera set up worked OK to allow a few folks to see what I was doing more easily, I am definitely hoping to have a much larger arrangement for next year.  The idea is to have a large monitor behind me, so that more people can watch at once.

Given how much noise there is in the vendor hall, I am trying to see if I can have some kind of mike and speaker set up to make it easier for folks to hear me!  Also, we want to have very specific demonstration times set in advance, so that people can make a plan to be around while the madness takes place!

I will now take all these vehicles that have been primed and get back to my usual live and recorded video sessions... stay tuned. 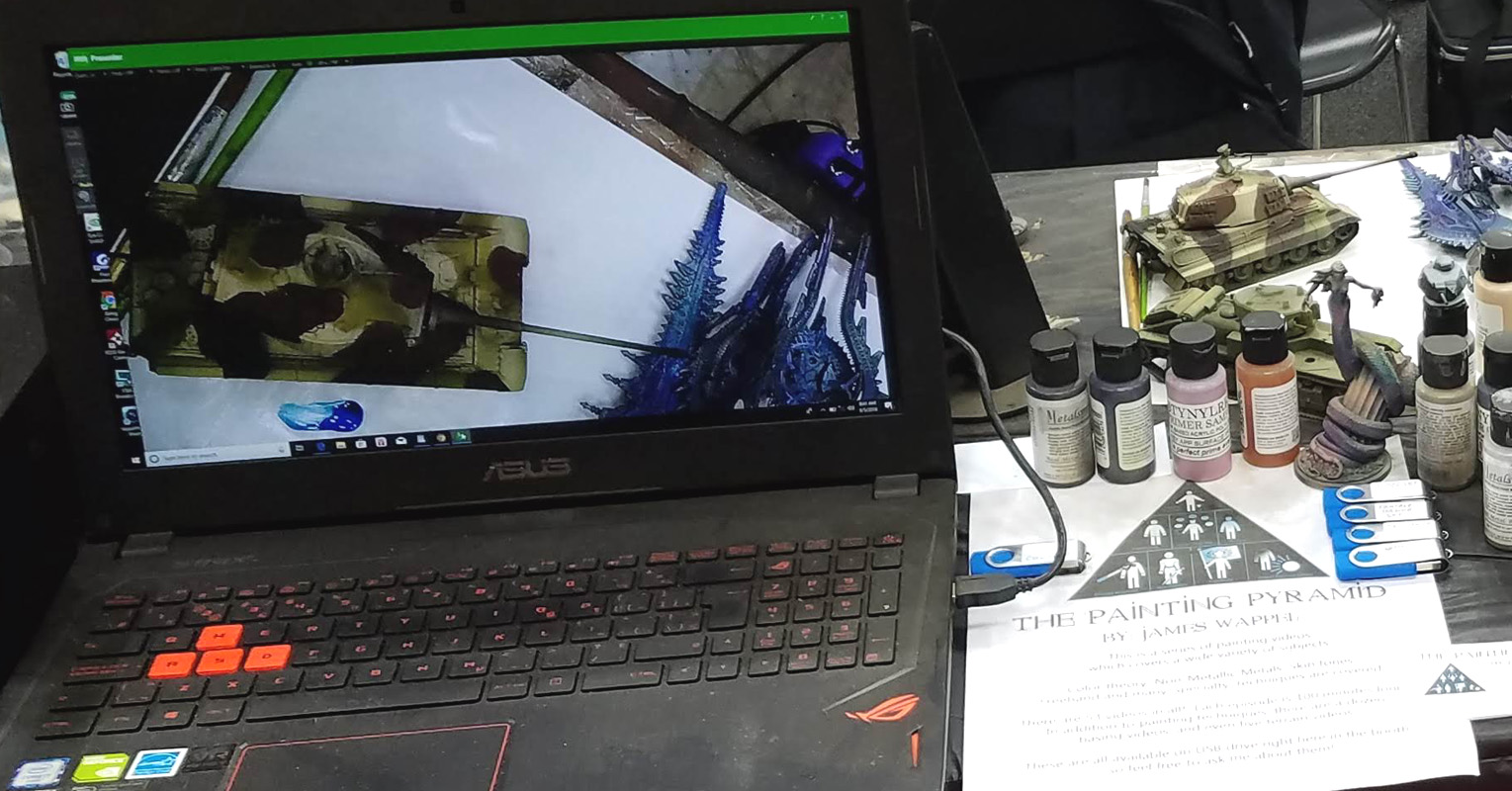