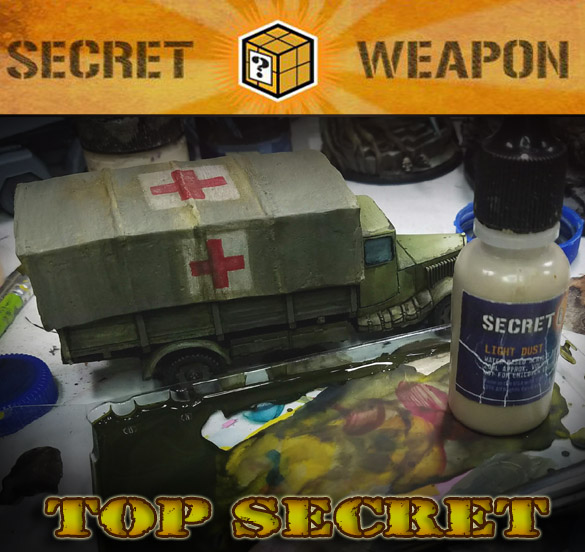 During another great hangout on the Styrene Syndicate, I was working on a vast number of projects all at once, which is pretty much normal!  I was also trying to get a few more units ready for the next battle report, and this ambulance was one of them. 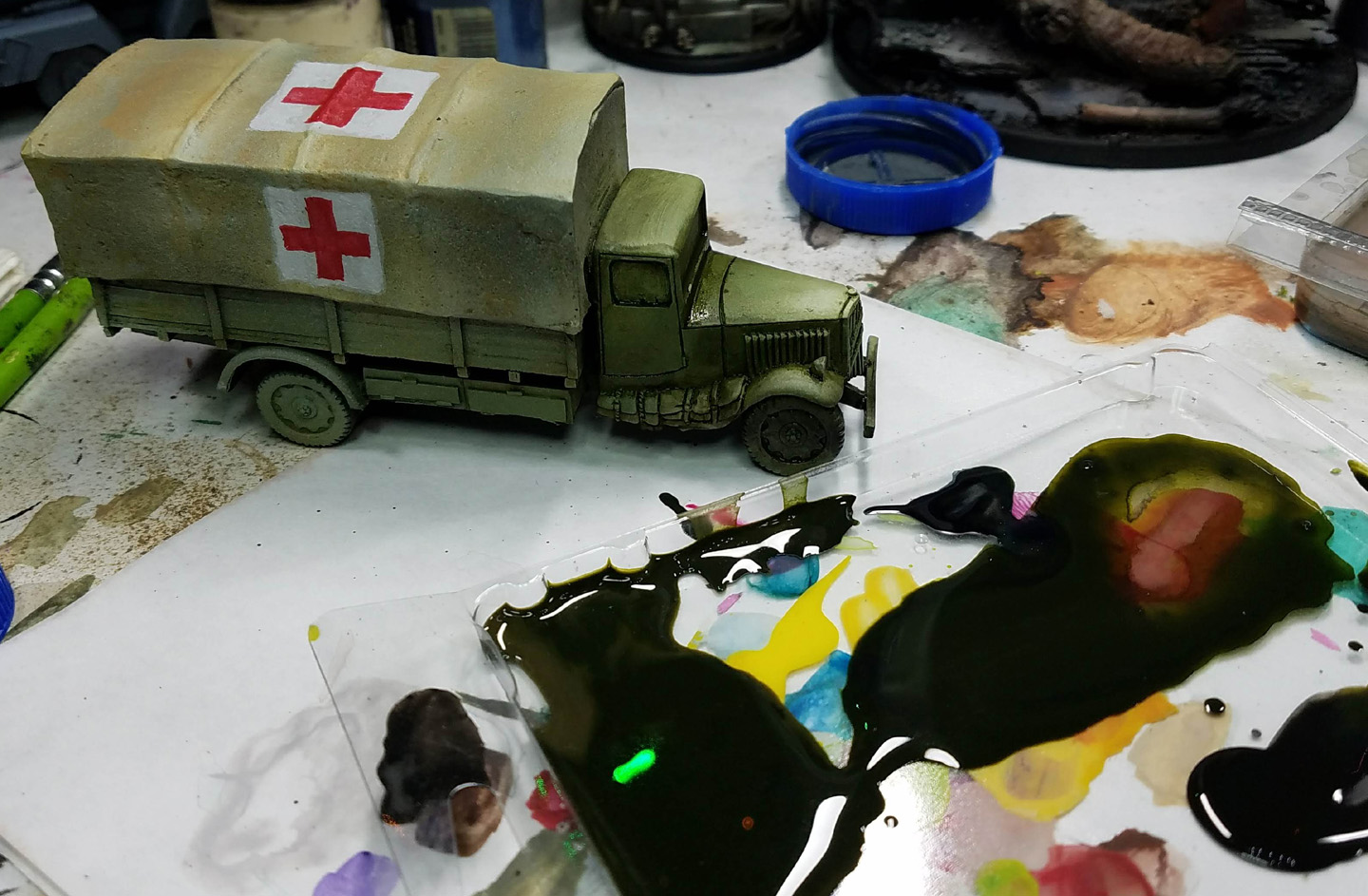 There was not much time, so I had to do this one quickly.  I brought out a few key paints, such as the Vallejo washes that I save for painting greenish vehicles in a hurry, along with the Reaper Liner paints and Secret Weapon Weathering paints.

I employed my usual system of placing the washes and wiping away the excess with the sponges and my larger brushes.  You can see this process under way on the cab. 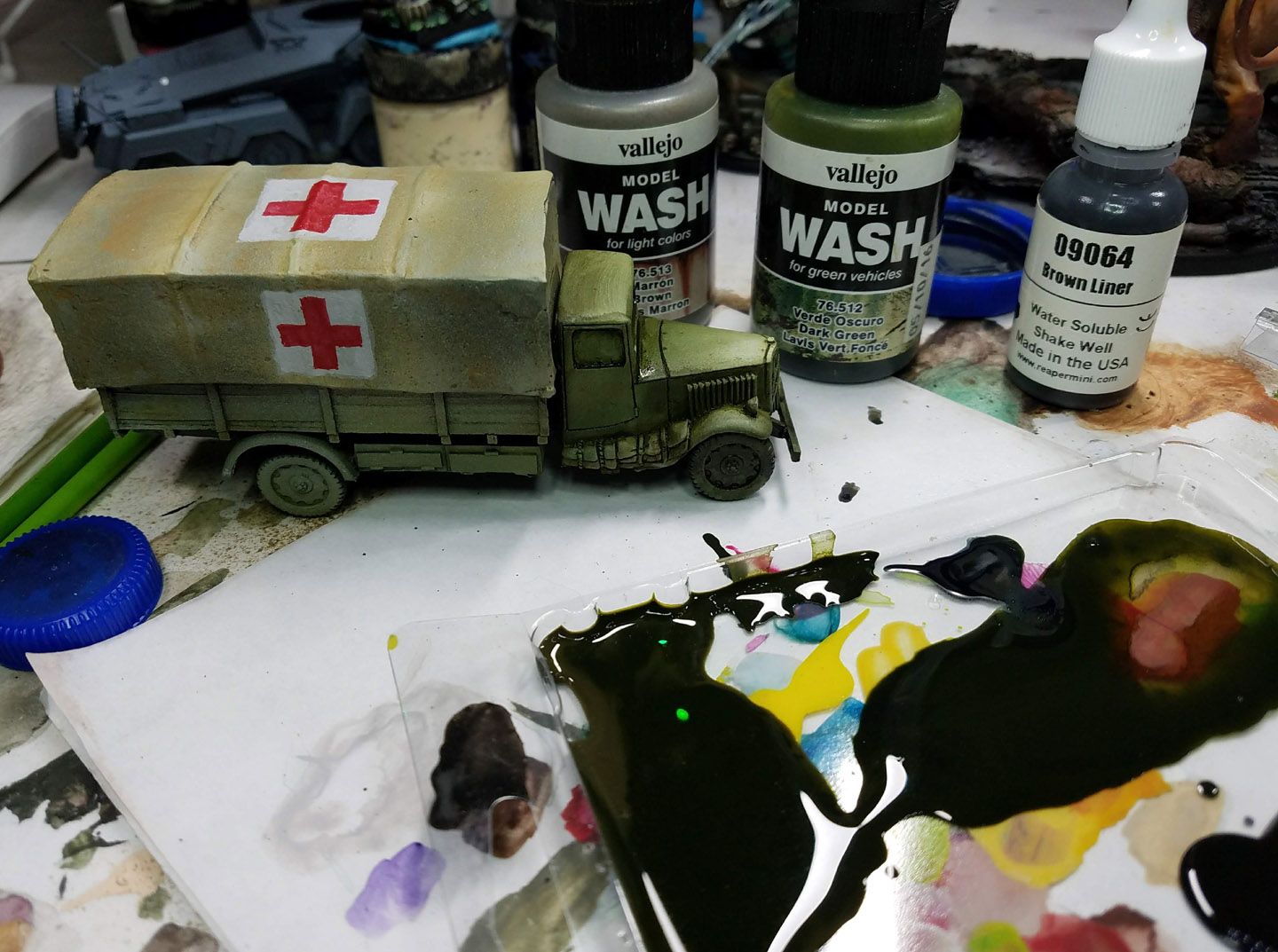 Mixing in Blue and Brown liner every so often to darken or alter the color temps a bit, I worked towards the back of the Citroen truck (a resin and metal figure from Warlord Games). 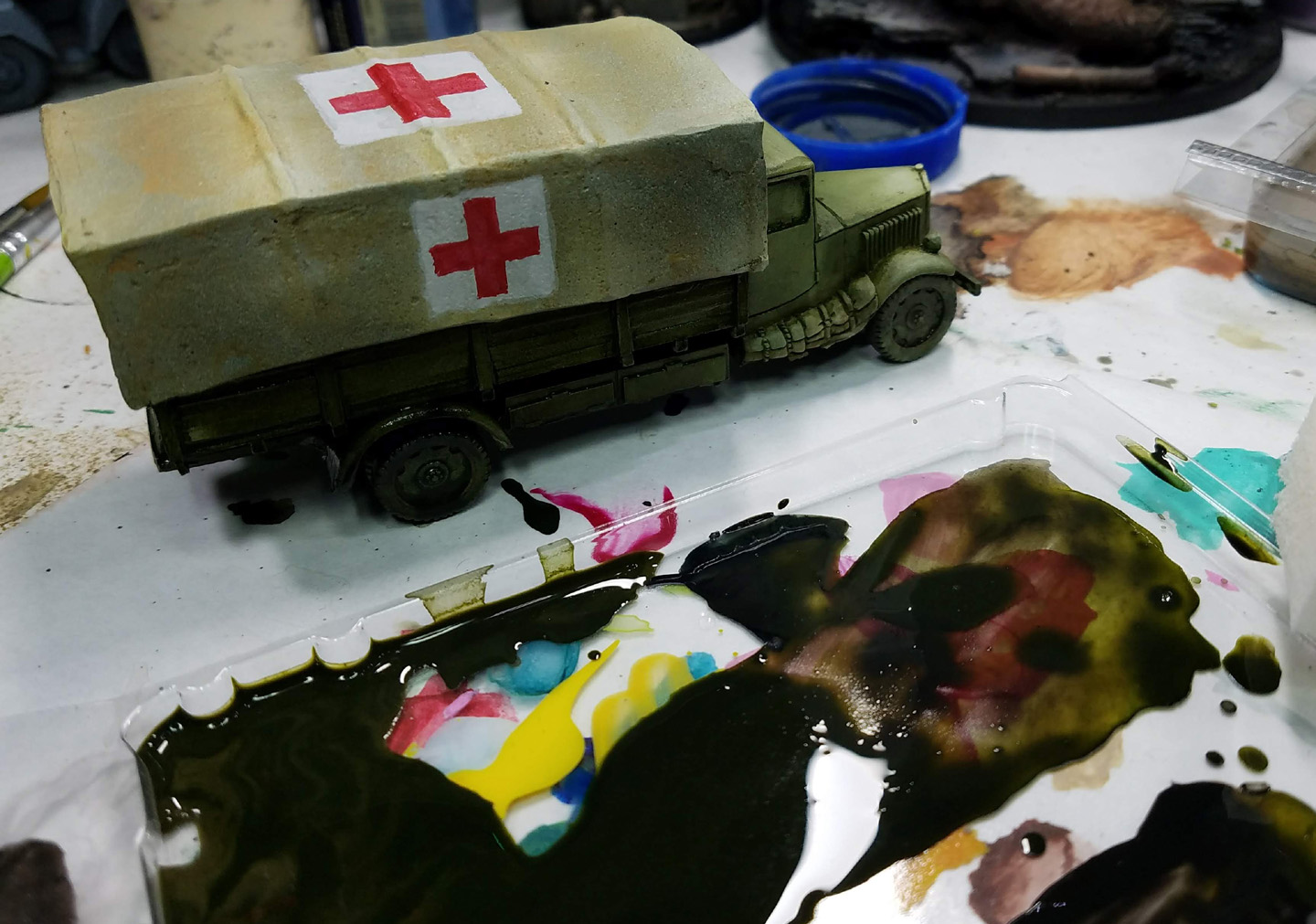 On the canopy, I used a little more of the sepia wash, and made sure to scrub quite hard as I wiped it away from the recently painted ambulance markings.  The idea was to try and wipe some of those away, as markings on cloth/canvas can fade and crack away more rapidly because of the flexible surface, etc. 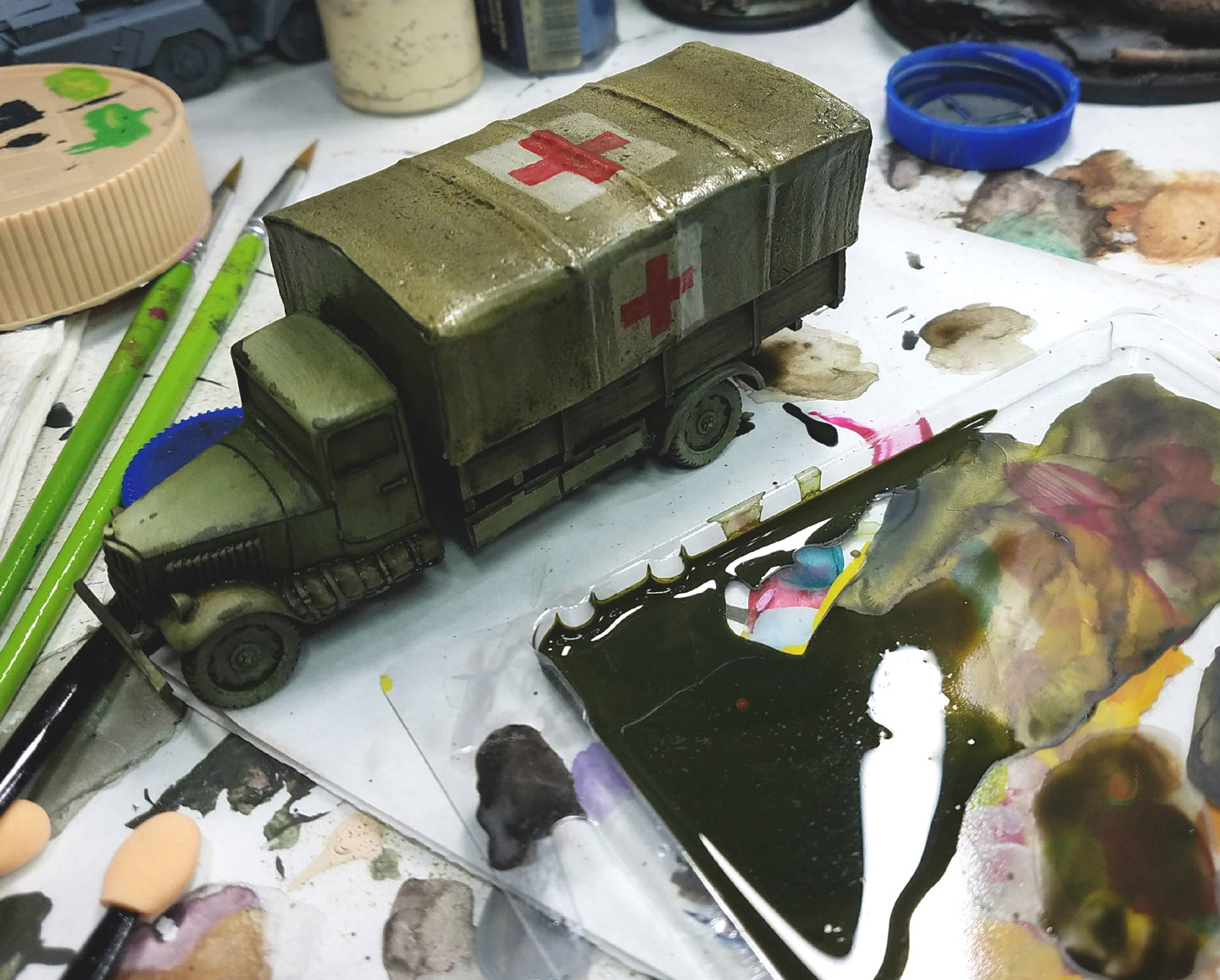 Then it was time to do a bit of dust and fading with the Secret Weapon Weathering paints!  This worked in reverse of the darker shading washes.  I wanted the lighter 'dust colors' to stay in the crevices where the canvas was stretched over the frames.

Again, this all had to be done very rapidly, so I could not employ the oil paints as I normally would. 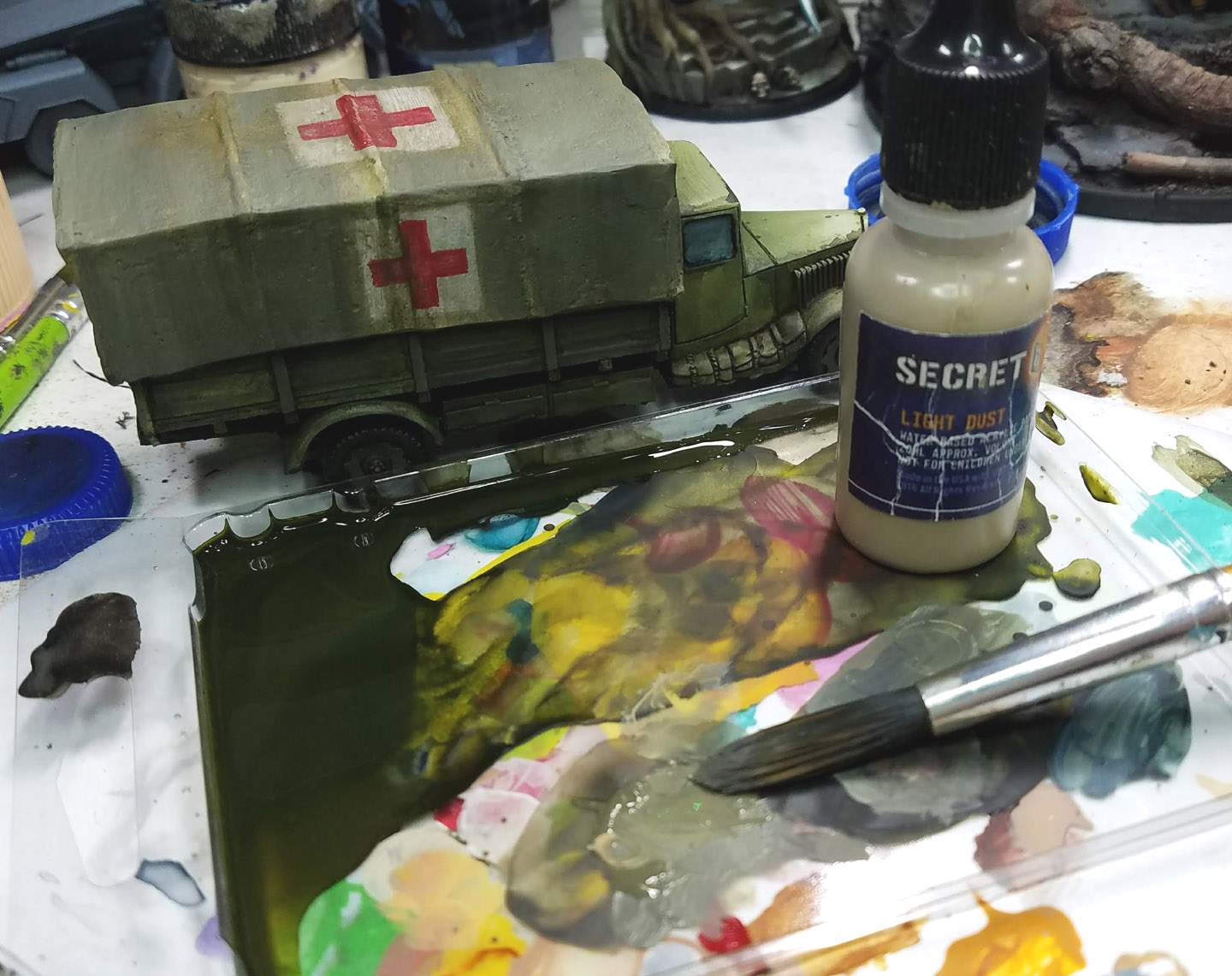 I also made sure to have these glazes go over the top of the ambulance markings, which would give me a second type of weathering and wear on them. 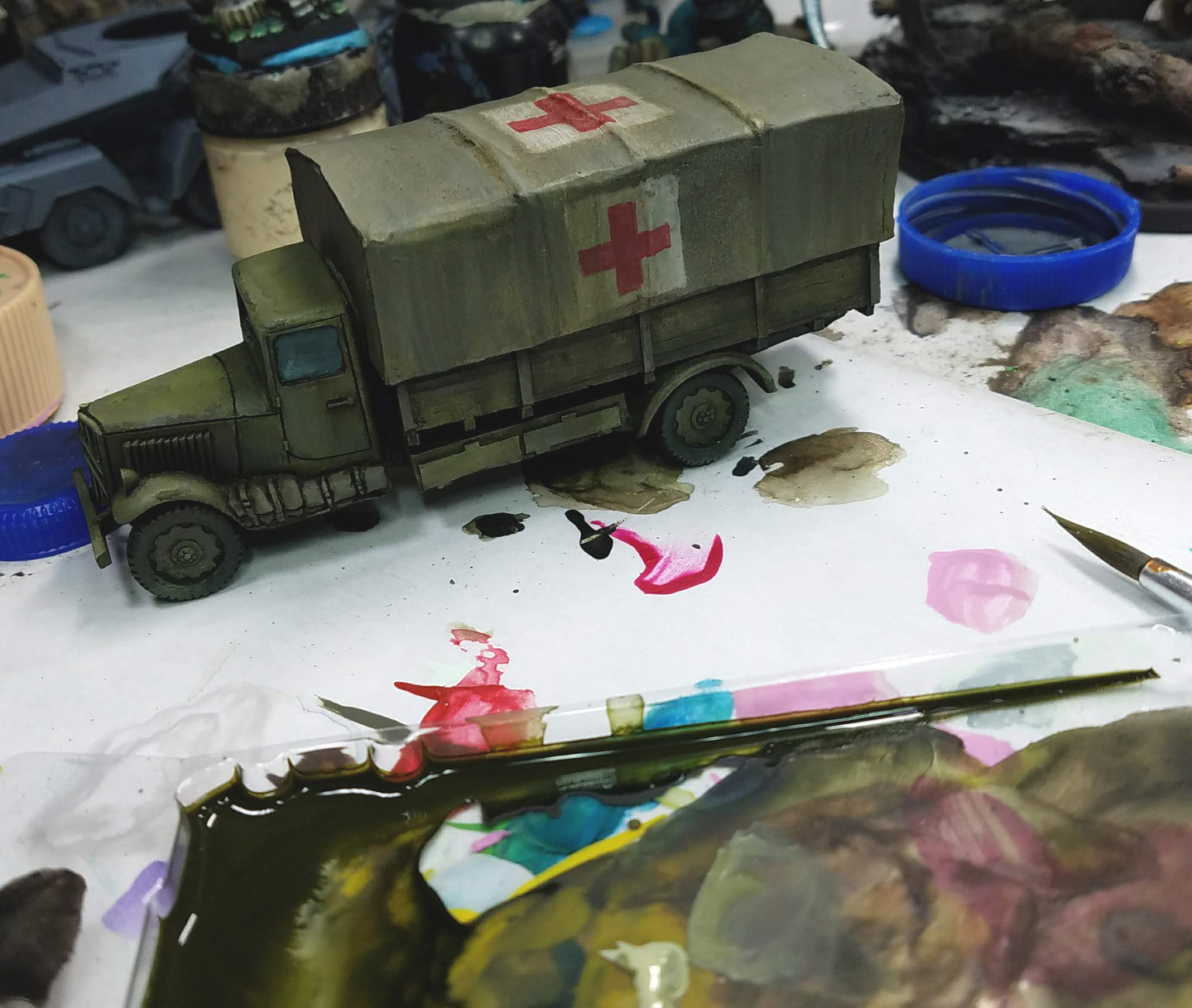 I also did this on some of the stowage too... 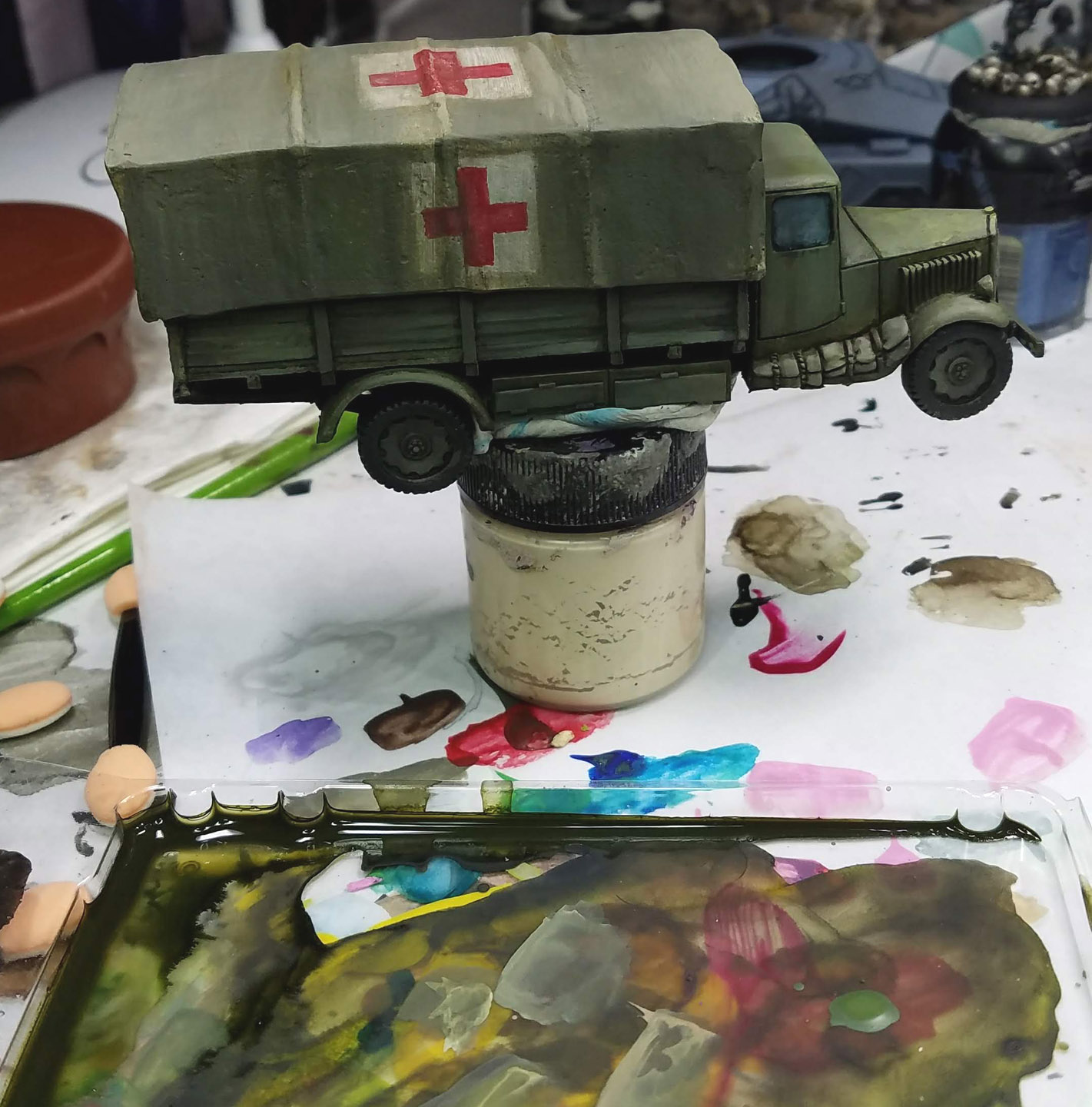 Once that was completed, I needed to quickly apply some dirt and dust to the wheels and undercarriage.  There are dozens of Secret Weapon weathering paints now, and this one is quite perfect for that... and it just so happens to be called "Light Dust". 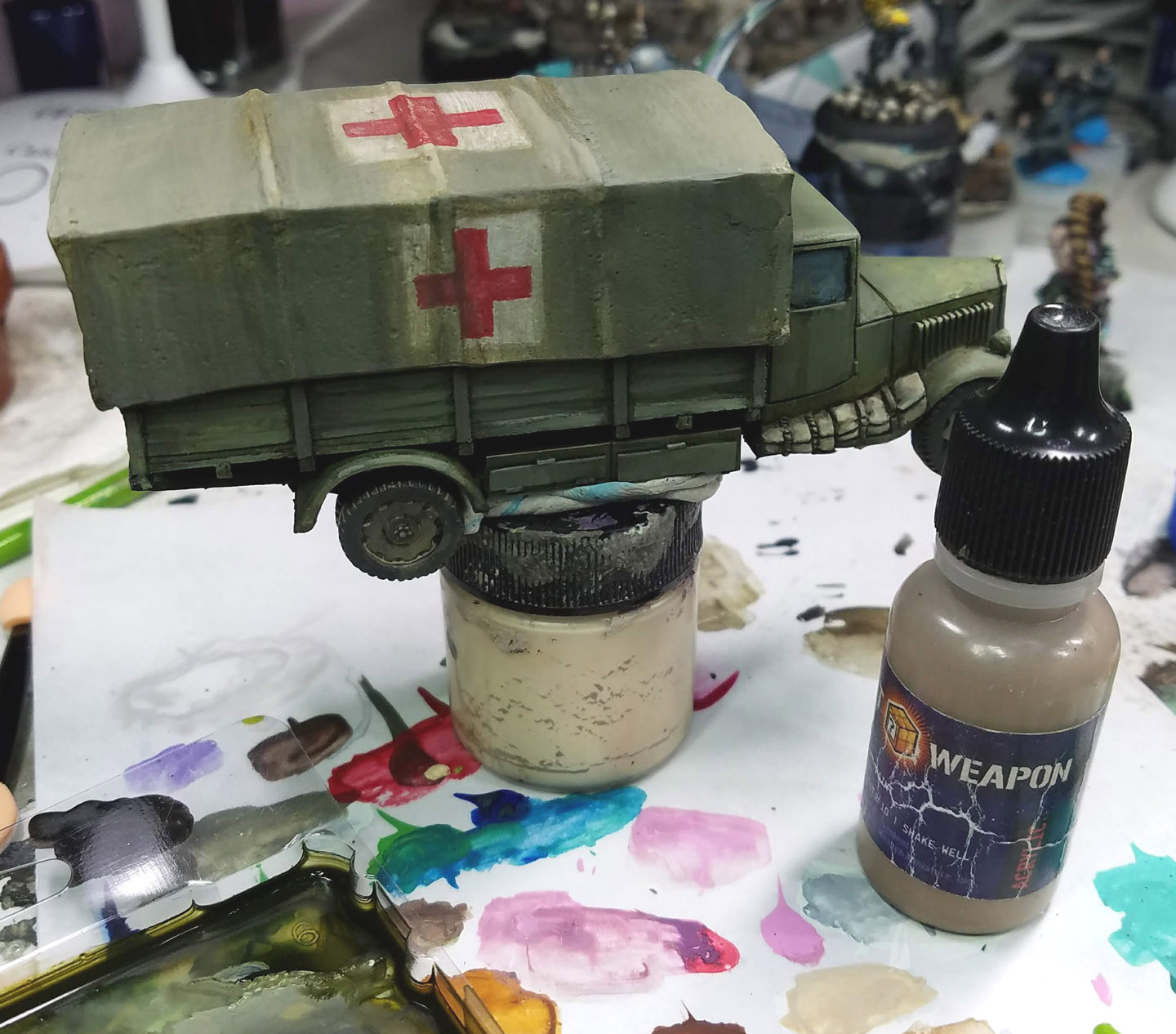 As before, this was applied mostly as a wash, and wiped away.  There were plenty of crevices and crannies to leave some behind!  The Secret Weapon paints are designed to 'flow' a bit like oils, and they are also meant to dry extremely flat, or matte.

This gives them the extra bit of realism, as they match the kinds of textures you see in dust, rust and so on. 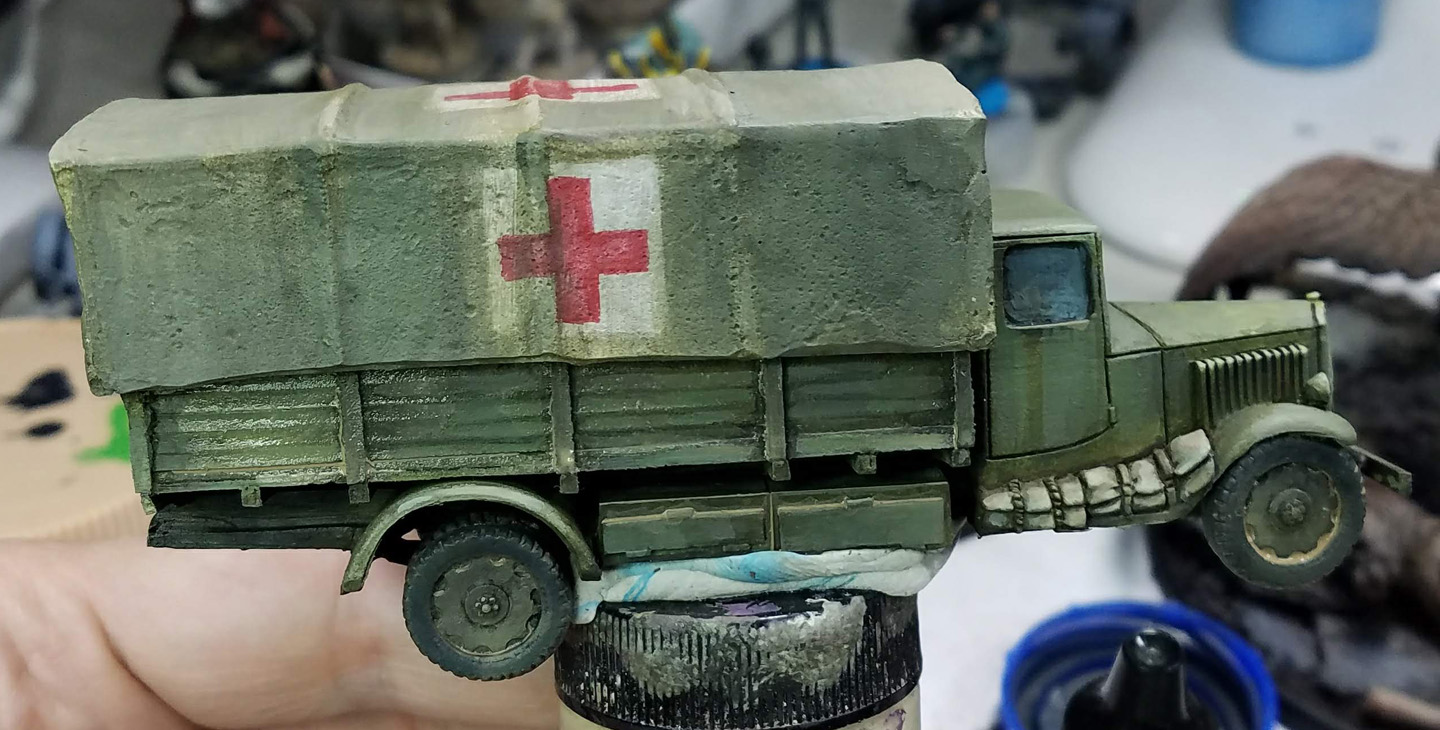 One more substitute... this time adding the dust paint with some weathering powders.  I just wanted to apply a few quick blotches of this here and there.  Again, normally I would use a set of mud products for this phase, but I only had about an hour for the entire painting process! 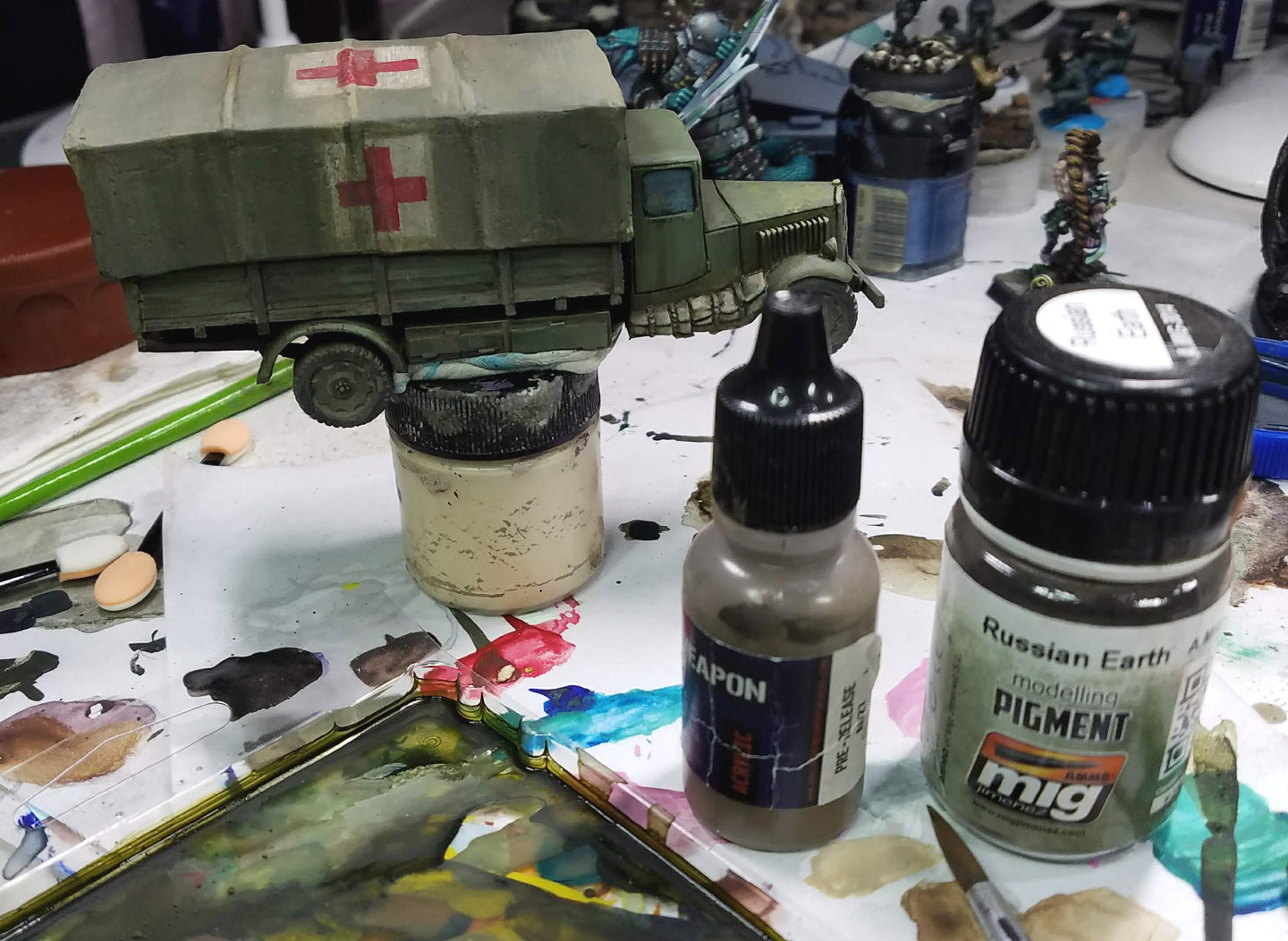 I went back over some parts of the tires with (you guessed it) Tire Black and a few other colors designed to use on tires.  They just think of everything... 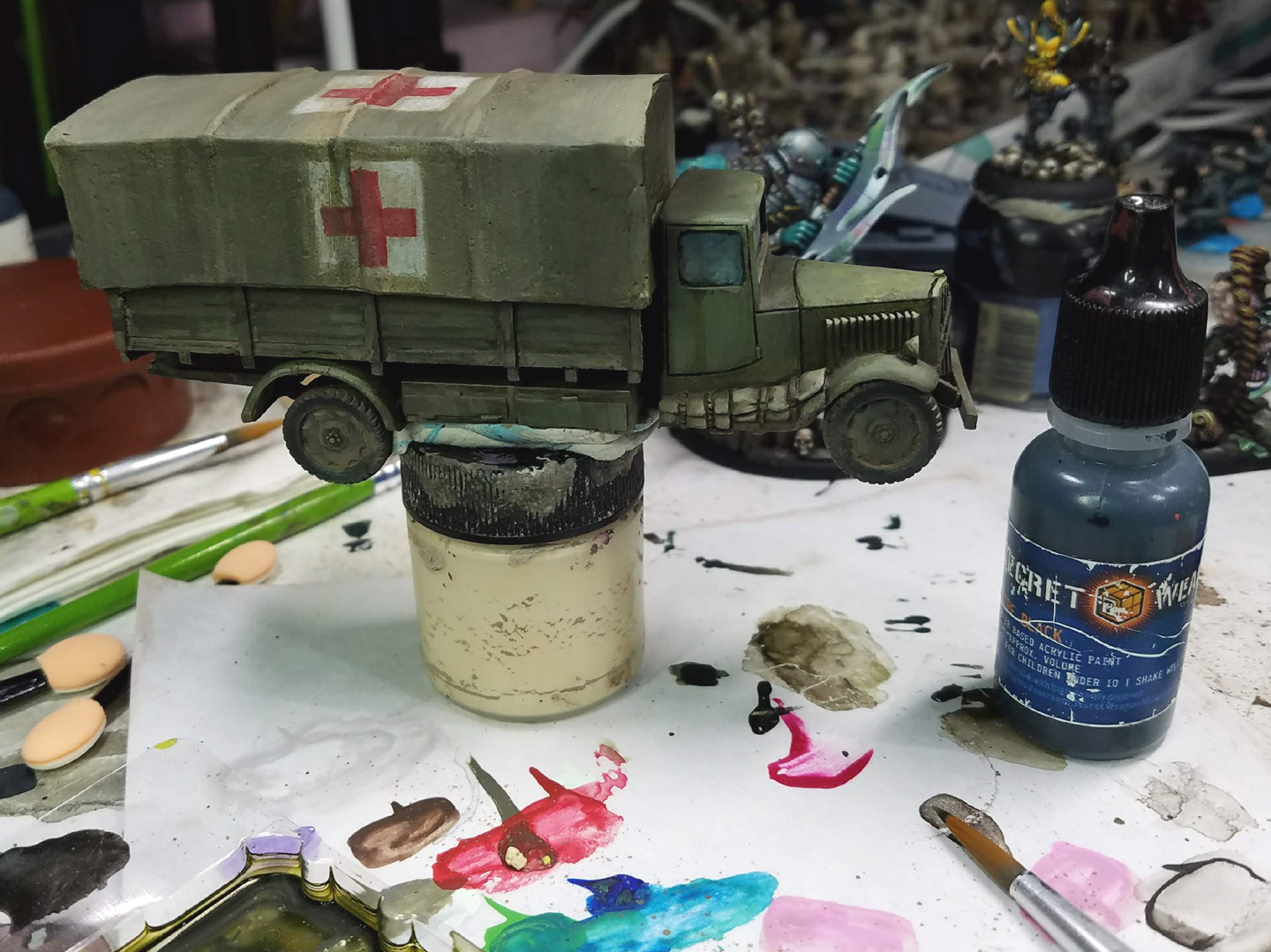 After some spatter and a few other quick details, this was all set for the next battle report, The Bridge to Nouvion!! 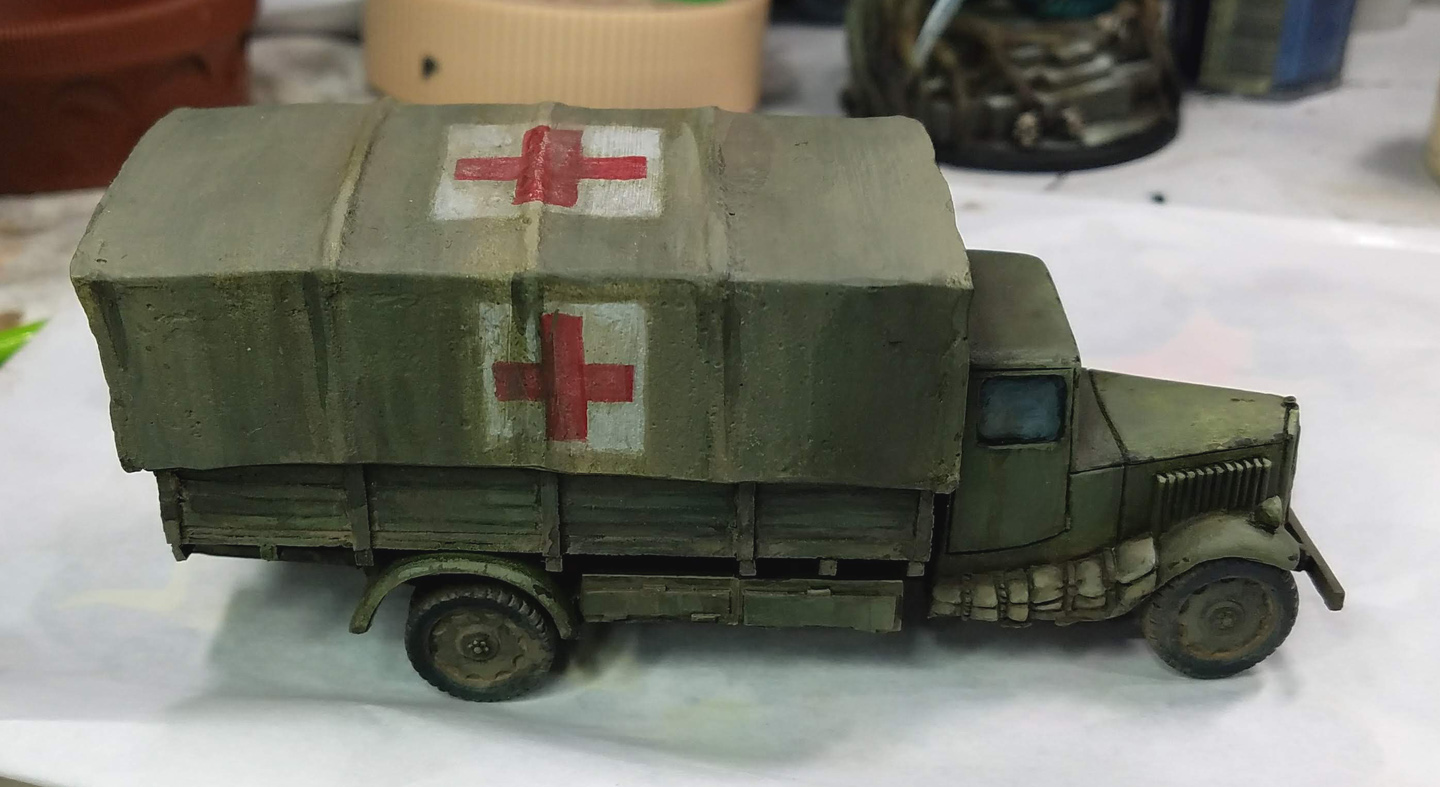