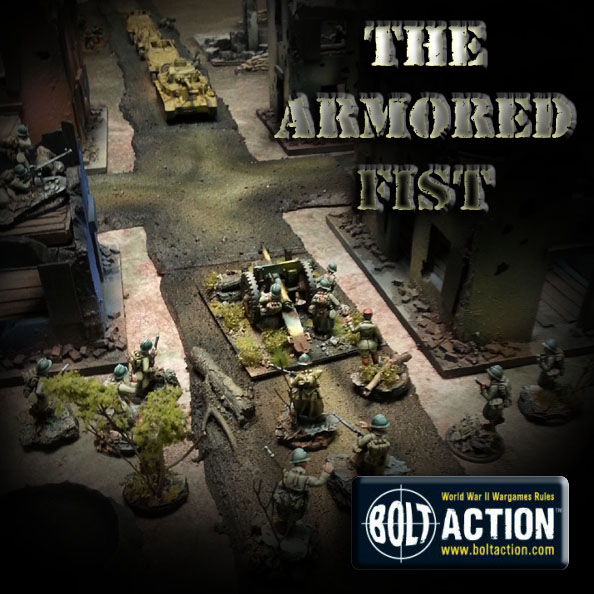 With the hurriedly constructed building drying and curing, I made some even more hastily build road sections.  The night before the test battle, I took the airbrush and some colored primers to both the buildings and the roads! 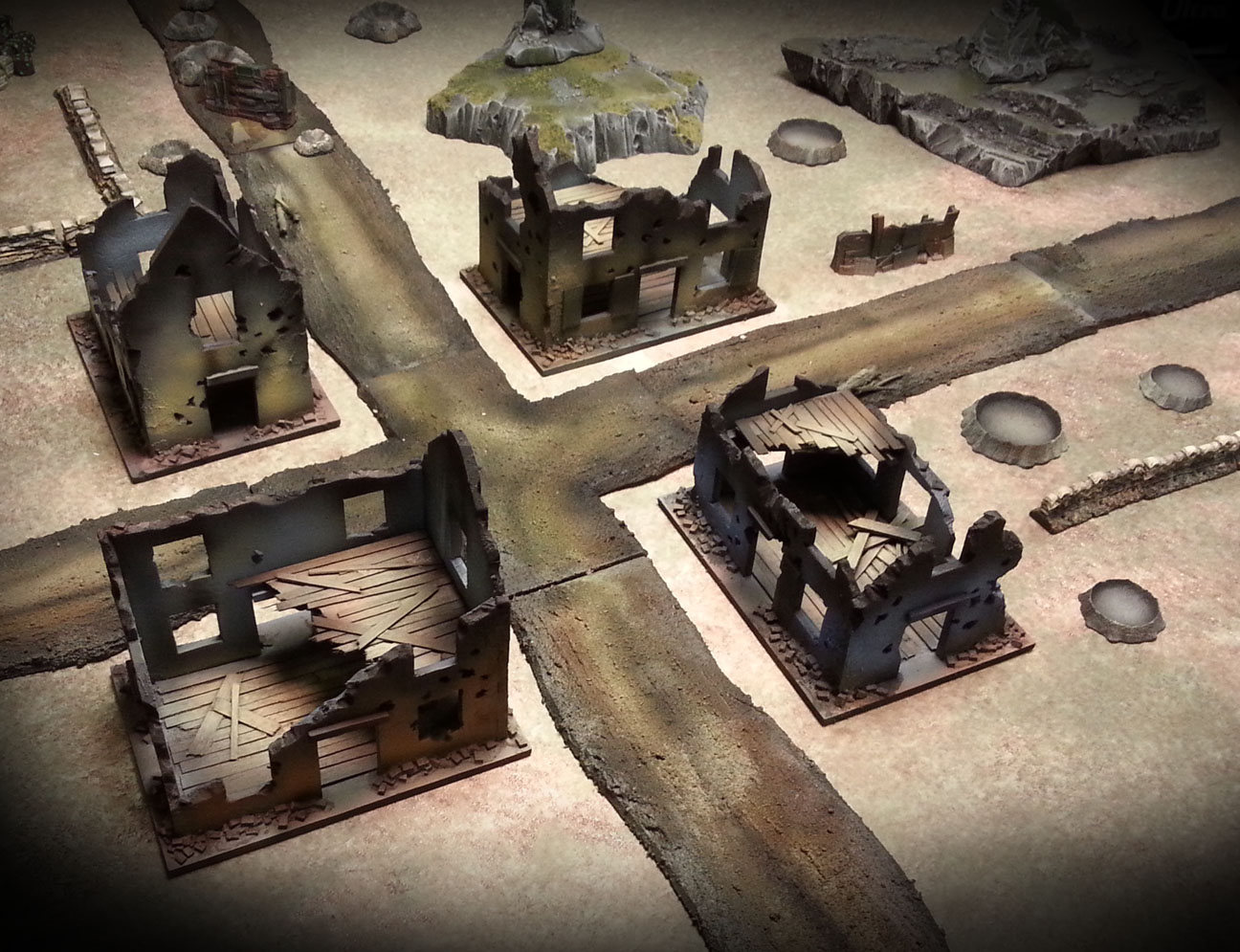 This was the result.  I didn't get too crazy with the painting at this point, because it was more about the physical size and playability factor.  Would the moveable floors hold up to the weight of the metal French gun teams and squads?  Did I match the scale of the intact buildings which one of the other players had purchased? 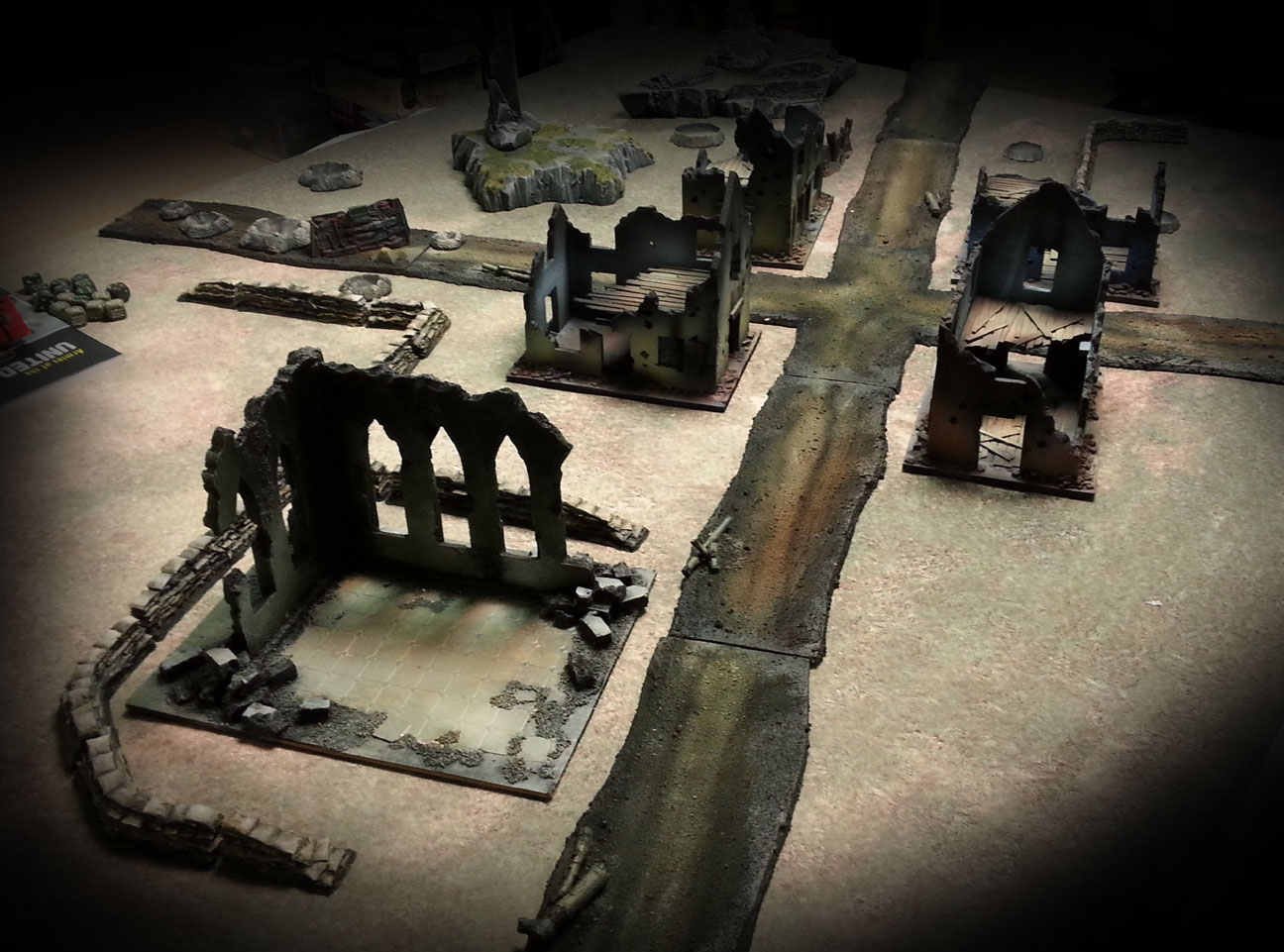 In fact, the colors I used to paint them was influenced by those on the intact structures.  All of this had to be done with some pictures passed to me over facebook, so I was kind of anxious when we started setting them both on the table! 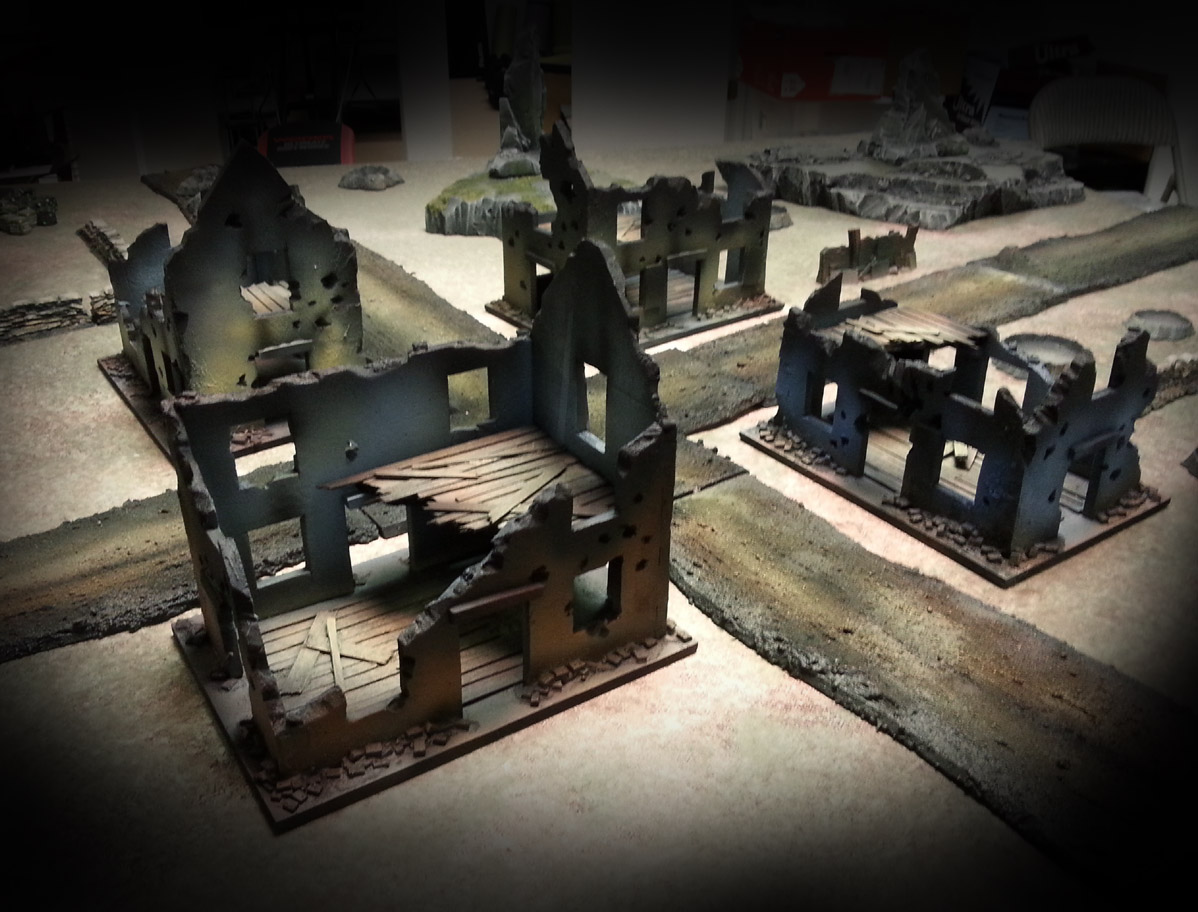 Success!  The mortar team fit quite well, and did not tip over or anything like that.  The sight lines were perfect, and I was able to give each structure its own personality.  In fact, each wall of the buildings had a different characteristic. 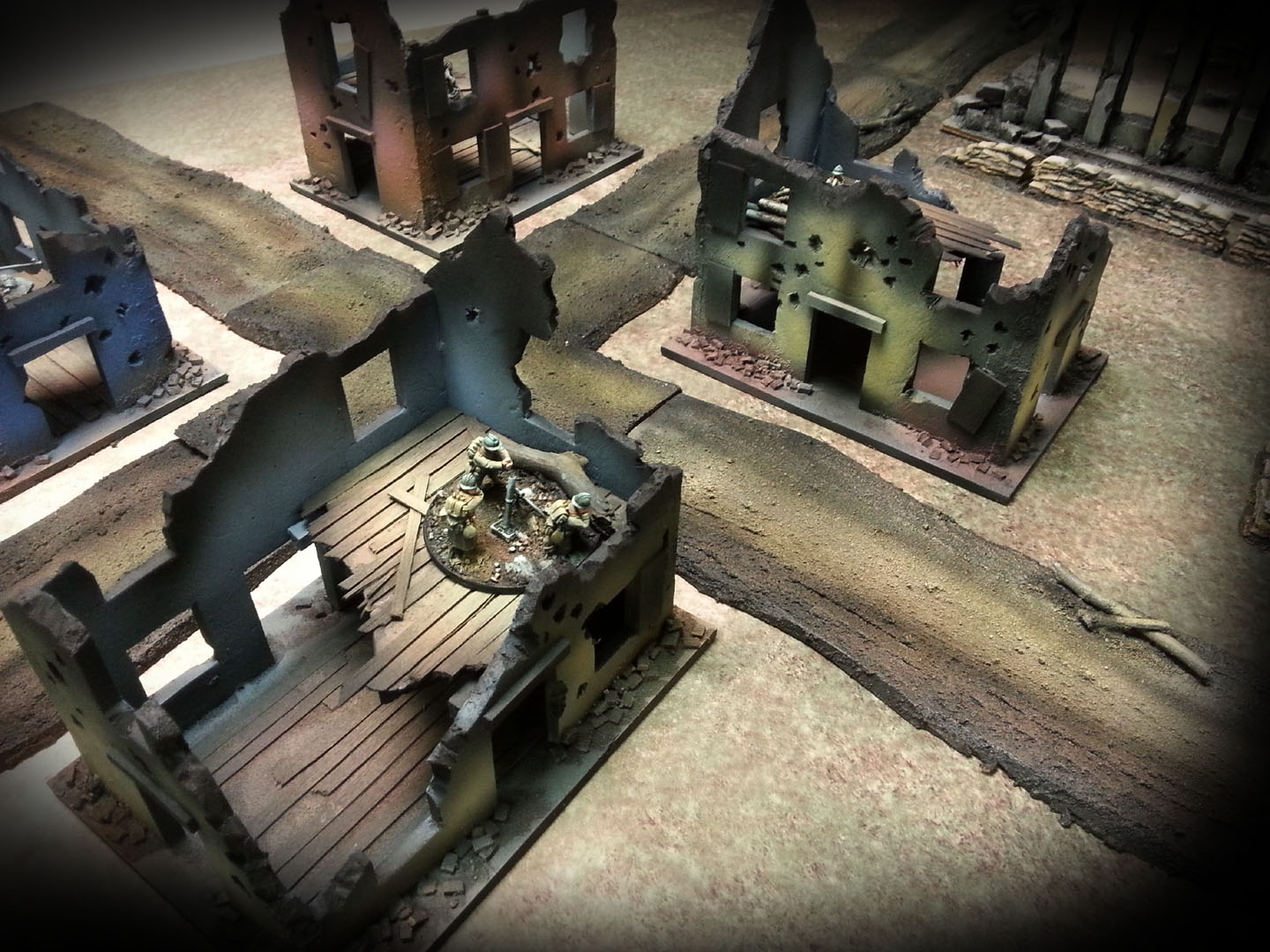 The lone anti-tank rifle looks for troop transports heading down the road.  Once more, those upper floors were designed to be the perfect sniper nests, so this view made me quite happy!! 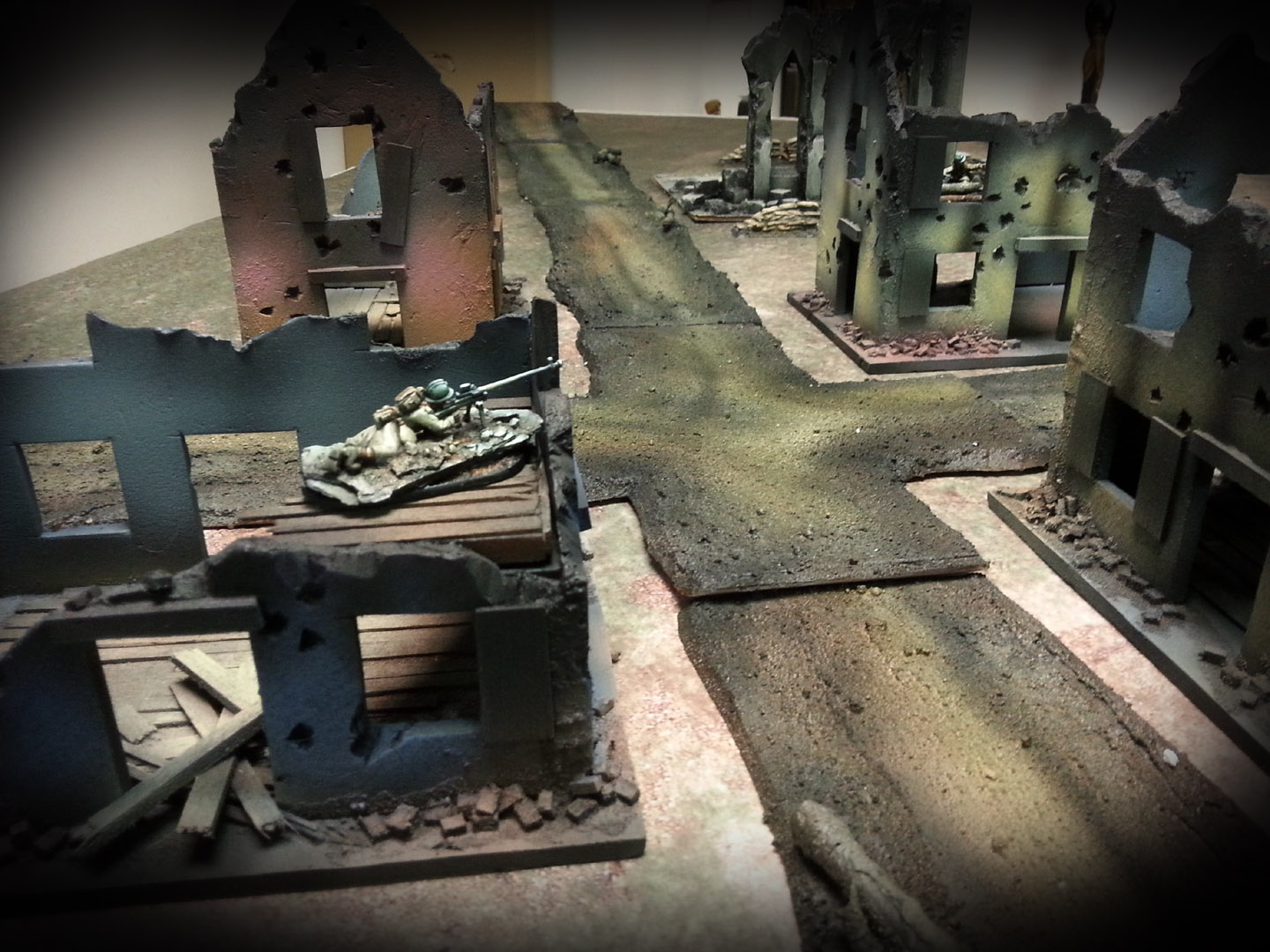 Let's not forget about the roads!  While I had used my own vehicles as a size reference, I didn't have any wider footprint vehicles such as a Panzer to place on my roads as I made them, so it was a relief to see how nicely the PZ 4 fit on the sections.

Not too wide, but not too narrow! 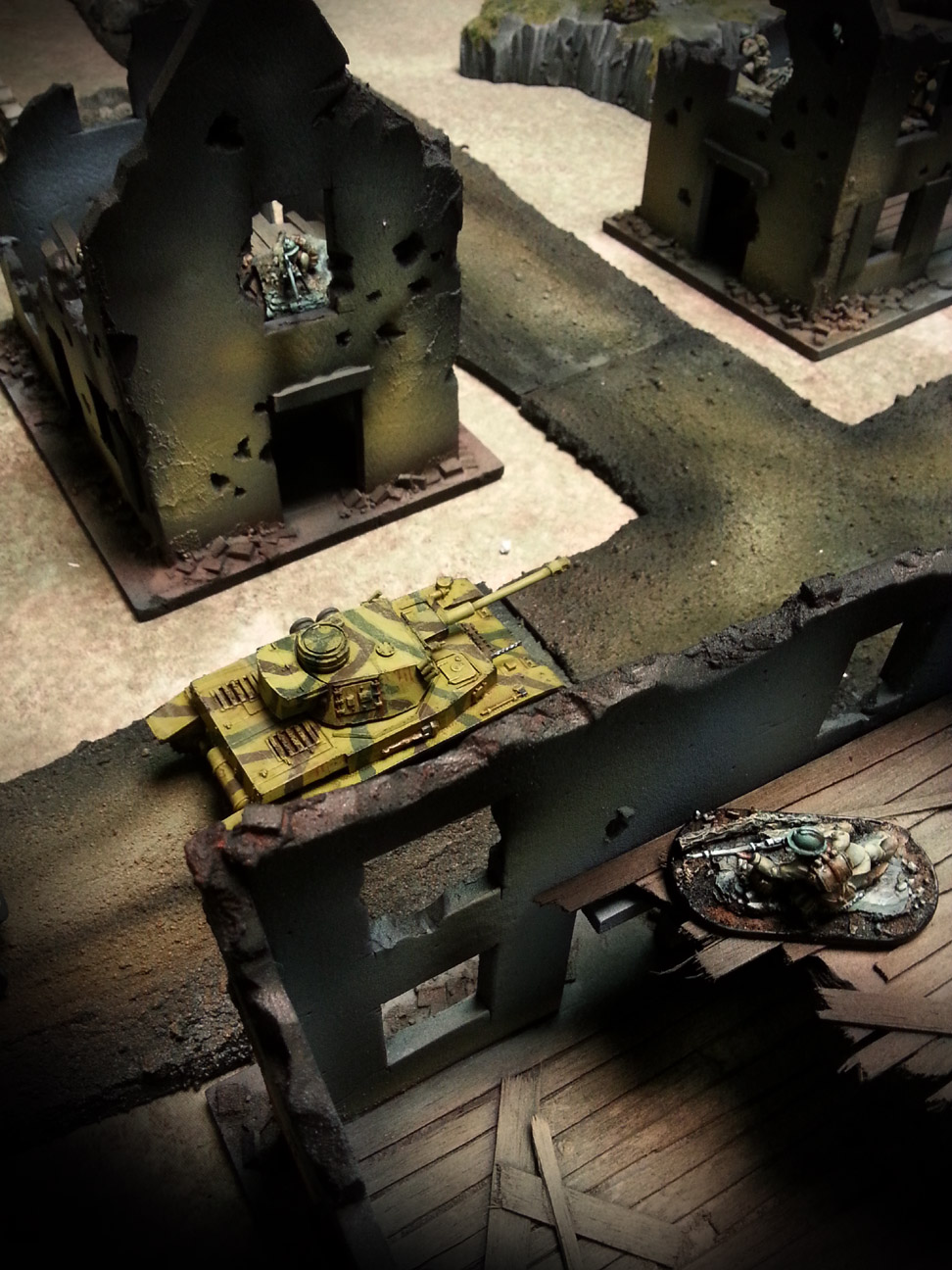 The primary reason we wanted these sections was to create far more interesting battle scenarios.  I will describe what I created a little later.  We wanted to have the roads to help vehicles cross the board more rapidly, thus freeing up the long axis of the board to battle scenarios.

Also, destroying the roads would be a new kind of objective... even cratering them with demo teams and/or aircraft!! 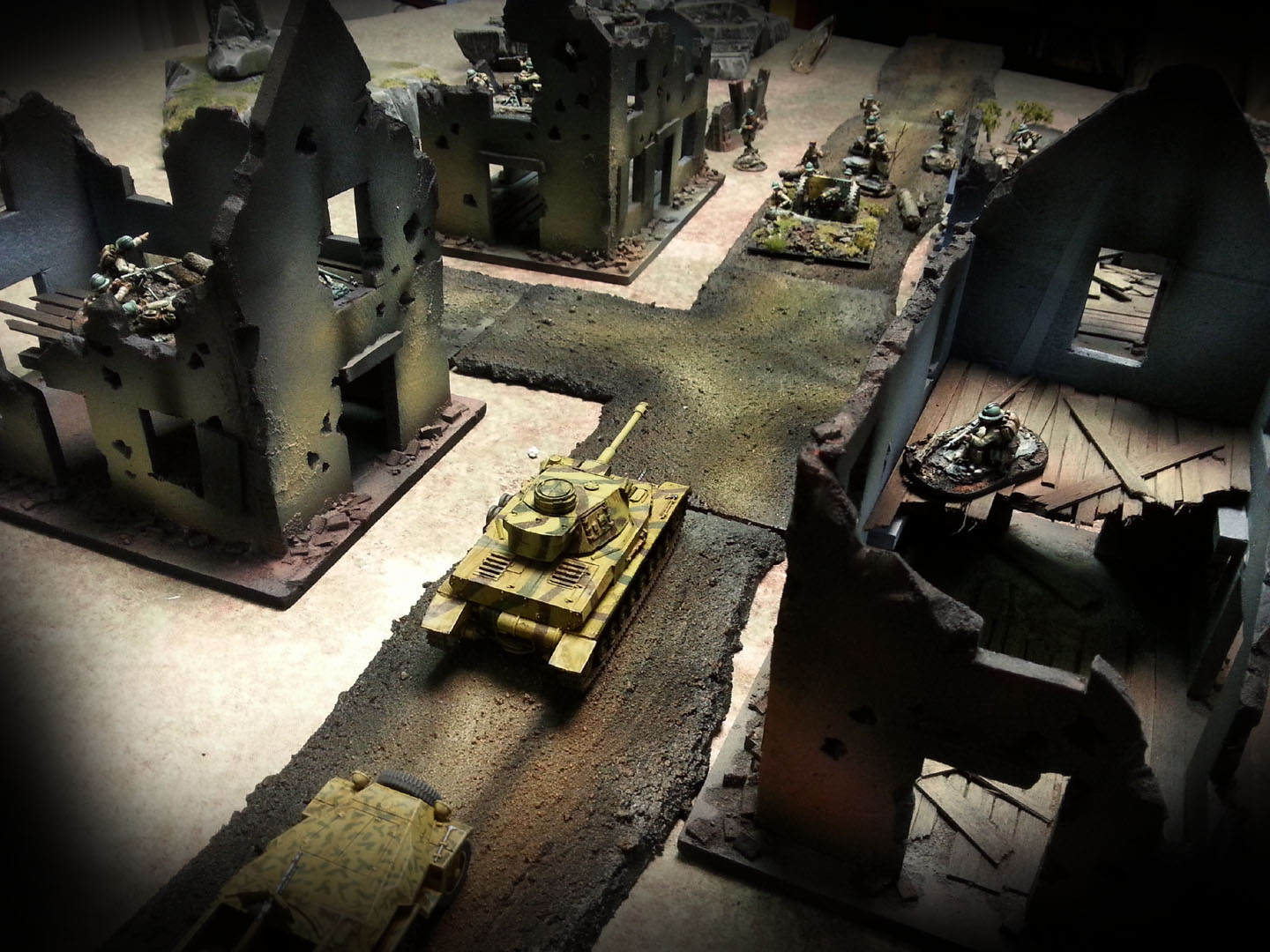 The floors held up nicely to even more metal, and the sight lines worked beautifully. 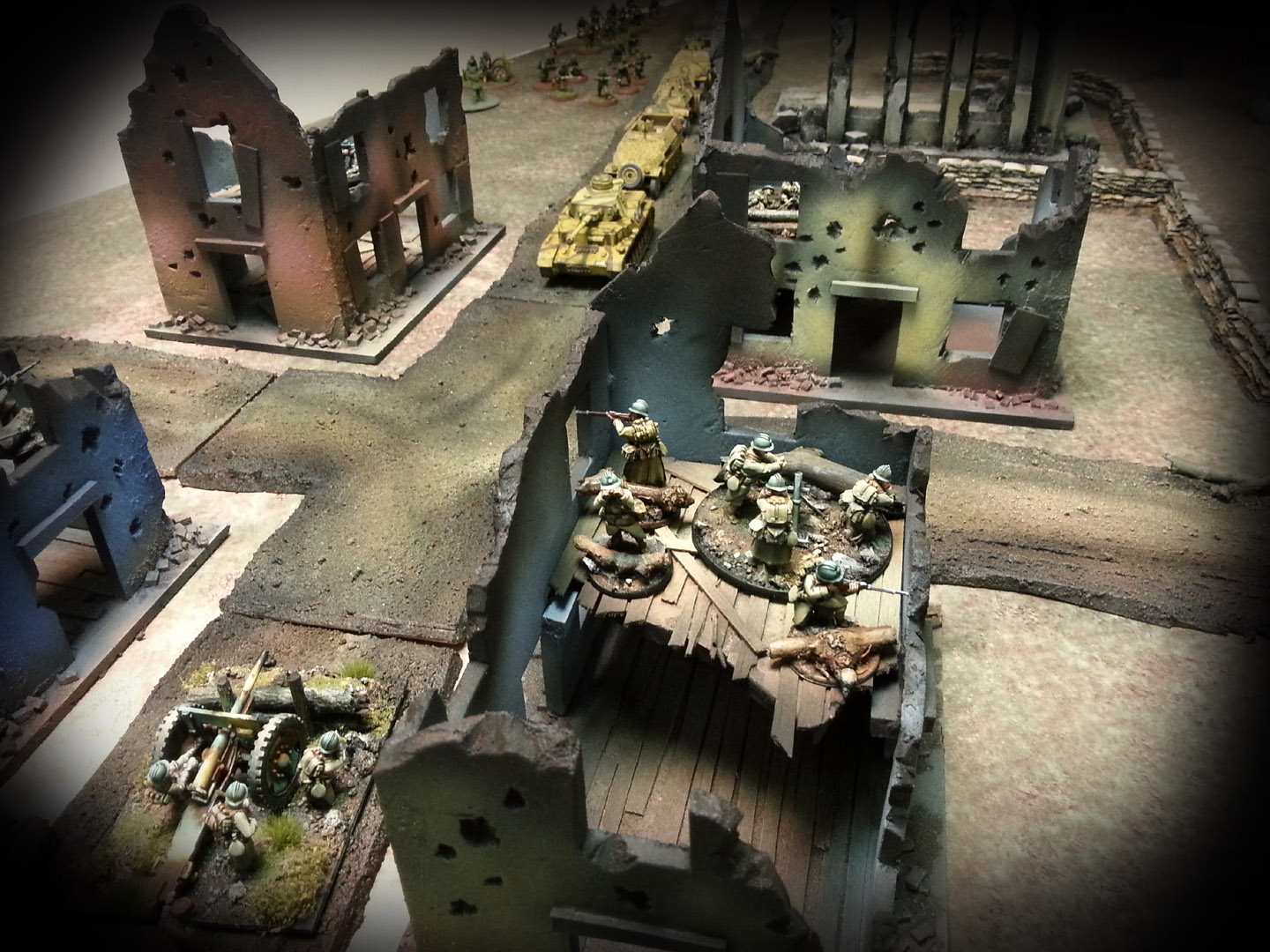 Defending a crossroads was a prime victory condition for my future scenarios, and this quick set up convinced me that I had done my job.  I was able to fit all the sandbags and tank traps around that intersection, and it easily held a 10 man squad. 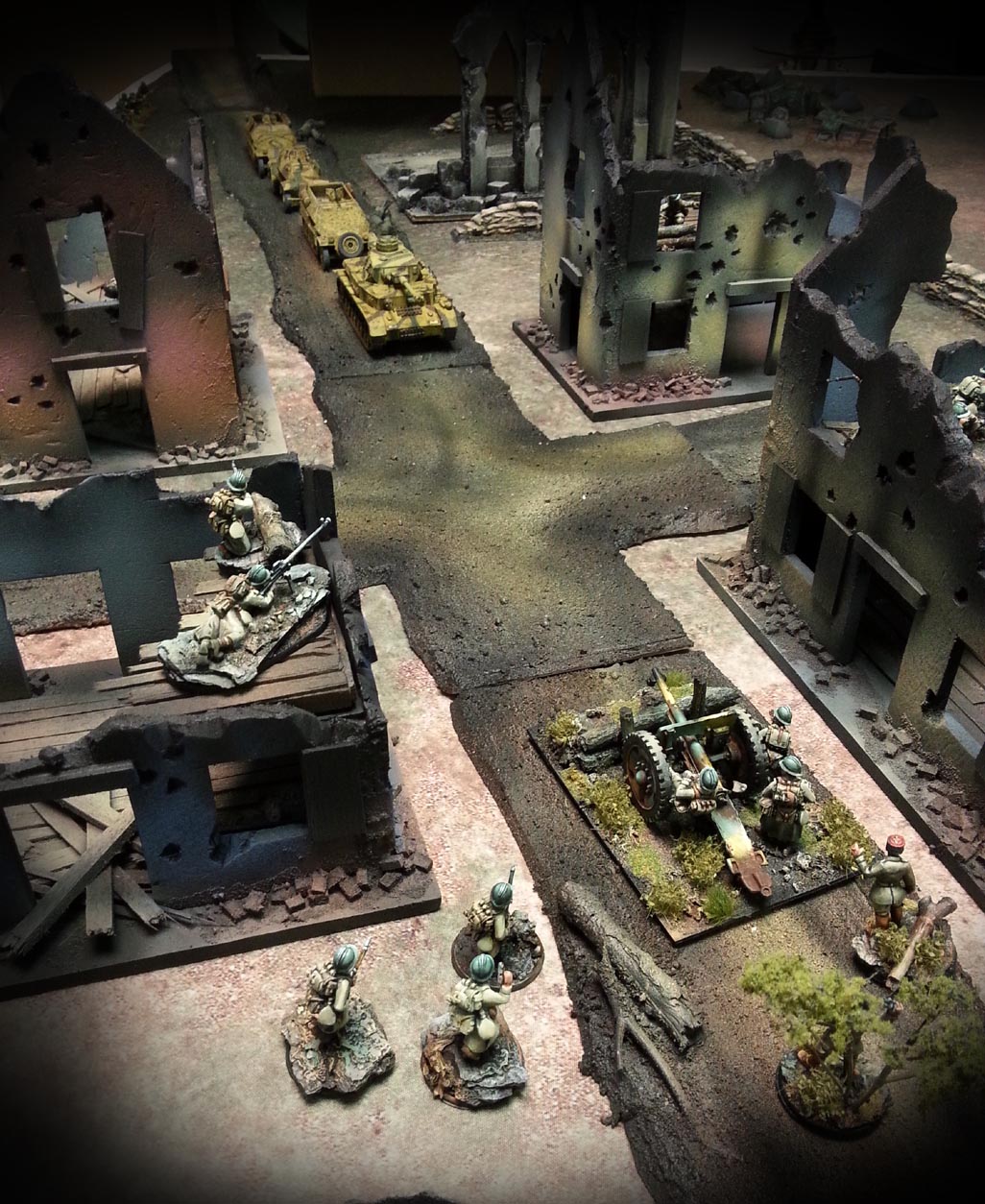 As a labored away with the pink foam, hacking it apart into all those wall sections, this was the ultimate reward that I had envisioned.  To see this view was incredibly exciting for me.  A lot of hard work, well worth the effort. 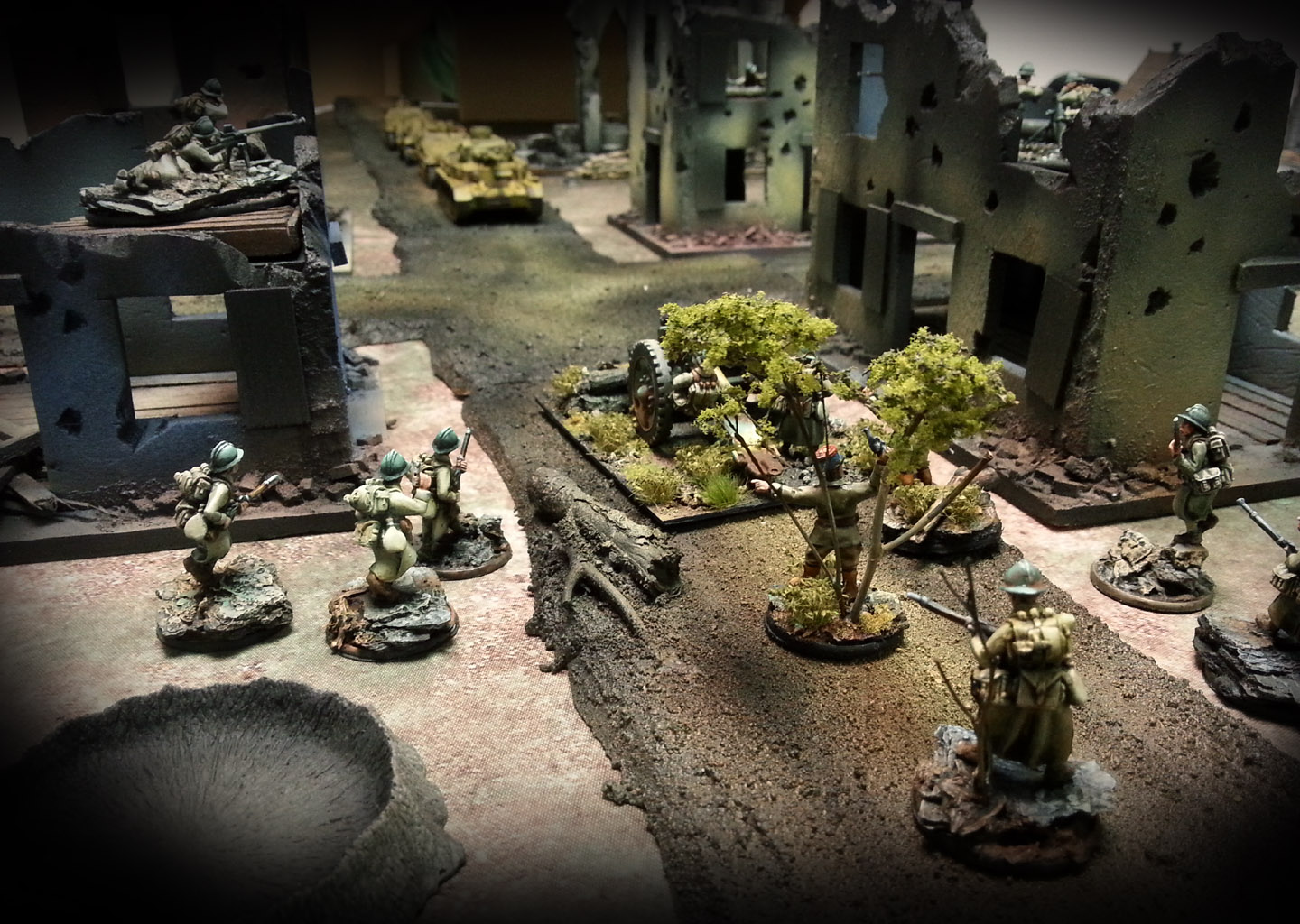 I tried to create a multi tier format for the scenario.

The Germans could get 10 VP's for being within 10 inches of the center of the crossroads.  They could earn 5 VP's for every unit that exited off the Allied edge of the board (we were deployed on the short sides of the board, obviously!)  Three points were awarded to either side for unit kills, and one point for each table quarter held.

The Allies would get 15 points if they could keep that entire intersection area clear of Boche.  That meant that all the buildings would have to be emptied of German units.  Very unlikely, so it was probably going to come down to unit kills and table quarters.

There were other special deployment schemes as well.  At some point, I hope to show a genuine battle report to you!  But, it all has to start somewhere, and that's by building up a table. 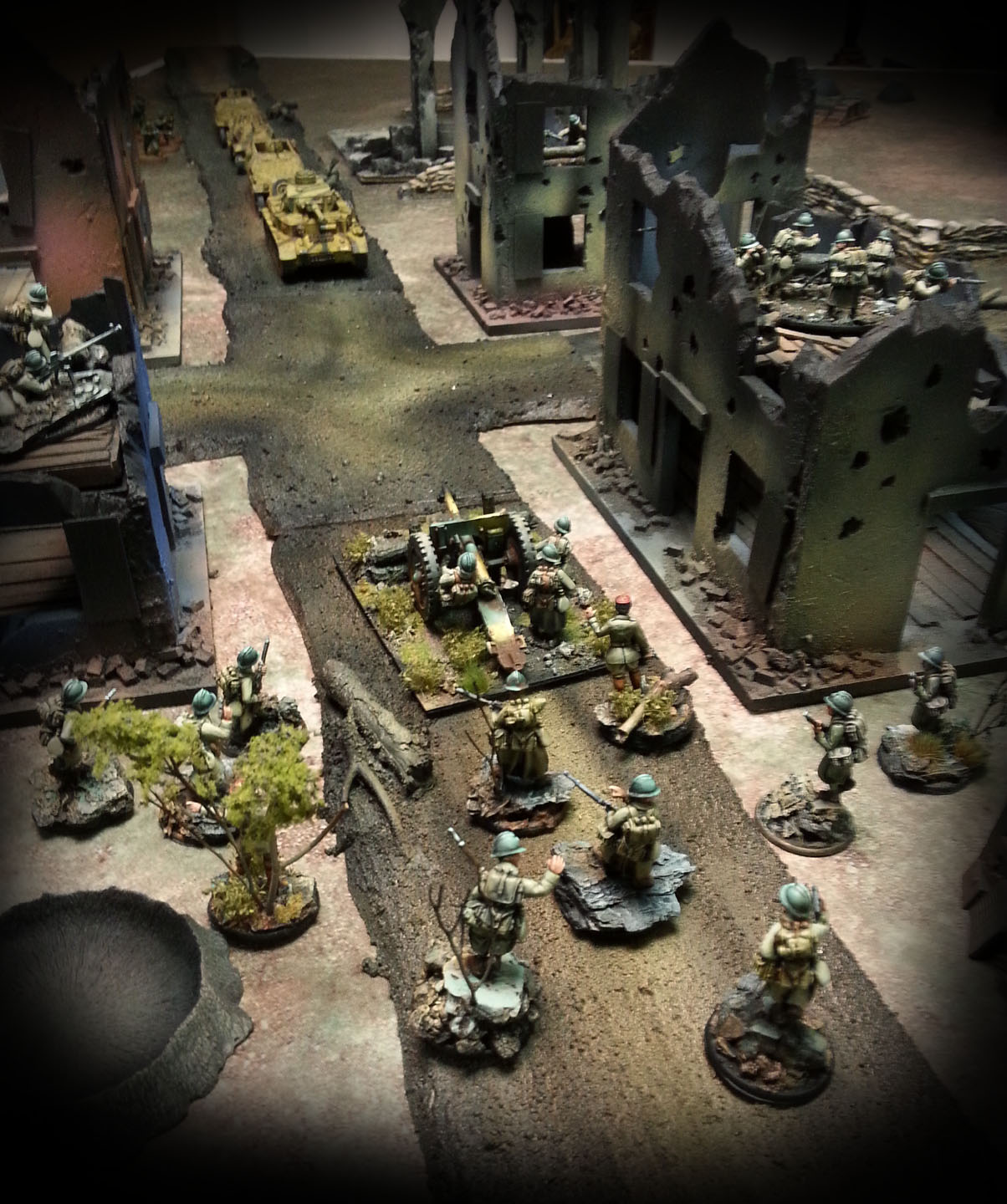