Show me your stripes 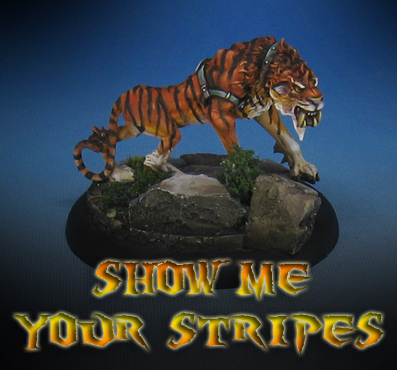 This old Confrontation figure was part of a two piece set, and an interesting color scheme was requested.  While the original colors were a bit bland as a combination of light tans, the request was for a tiger stripe appearance.

Given the nature of the sculpt and the pose, it would be a challenge, especially on the face.  The shape was very different from an actual tiger, and they have a very distinct appearance that we are all used to seeing.

I used a series of semi glazing passes with the Secret Weapon weathering paints, which were perfect for the grayish white sections as well as the orange areas.

Once I felt like those areas were pretty well defined, I started to block in the stripes to see if they could follow these unusual contours.  Some of the sculpted mane was very thick, and it would be tough to carry a "line" through it!

It seemed to work out OK, however, and here is your tiger. :-)

Since I did not have a lot of time invested in my initial semi glazing passes, I was not going to be terribly upset if the stripes would have to be altered, moved, etc.  In fact, I adjusted every single strips along the way, especially as I did the final phases of the shading.