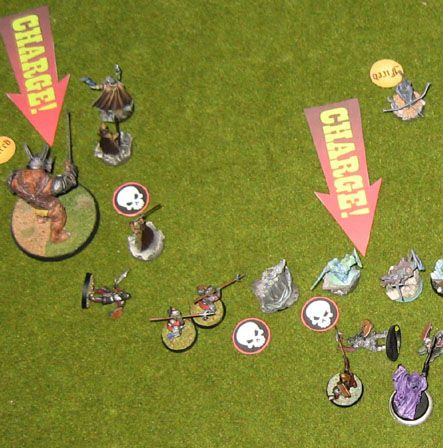 Here we go!  After getting some much needed rations, it was time to rejoin the fight.

You can see in these next few images the King and some elves trying to engage the downed orcs. 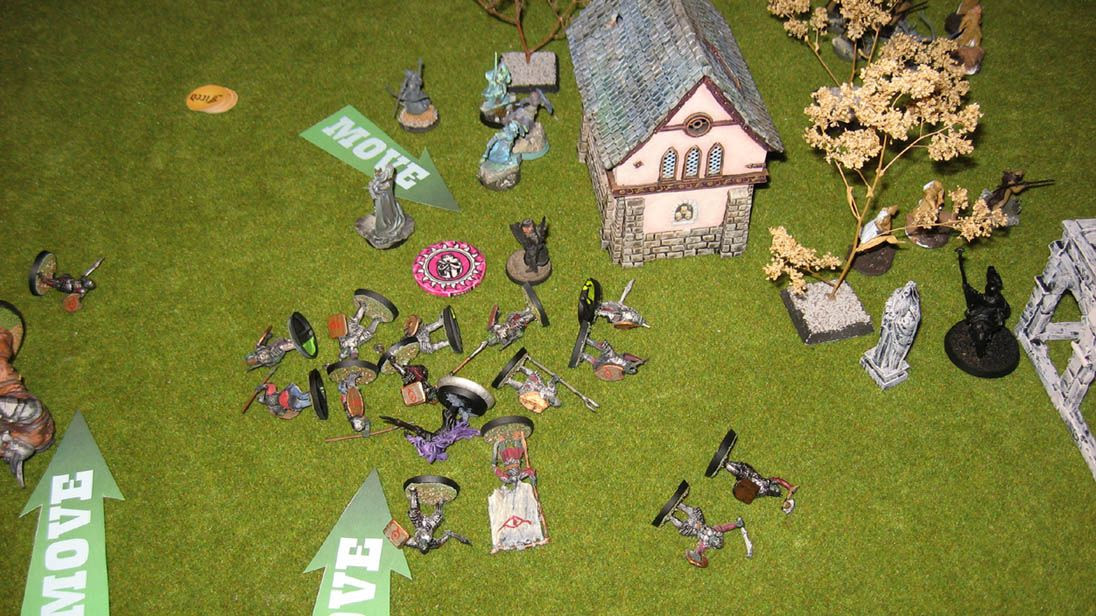 I was hoping to get a few kills here, since Rich had another unit of orcs marching along the side of the board.  If I could get the numbers of this engaged unit down, I could sustain another engagement with that new approaching unit. This images shows that additional unit trying to outflank me. 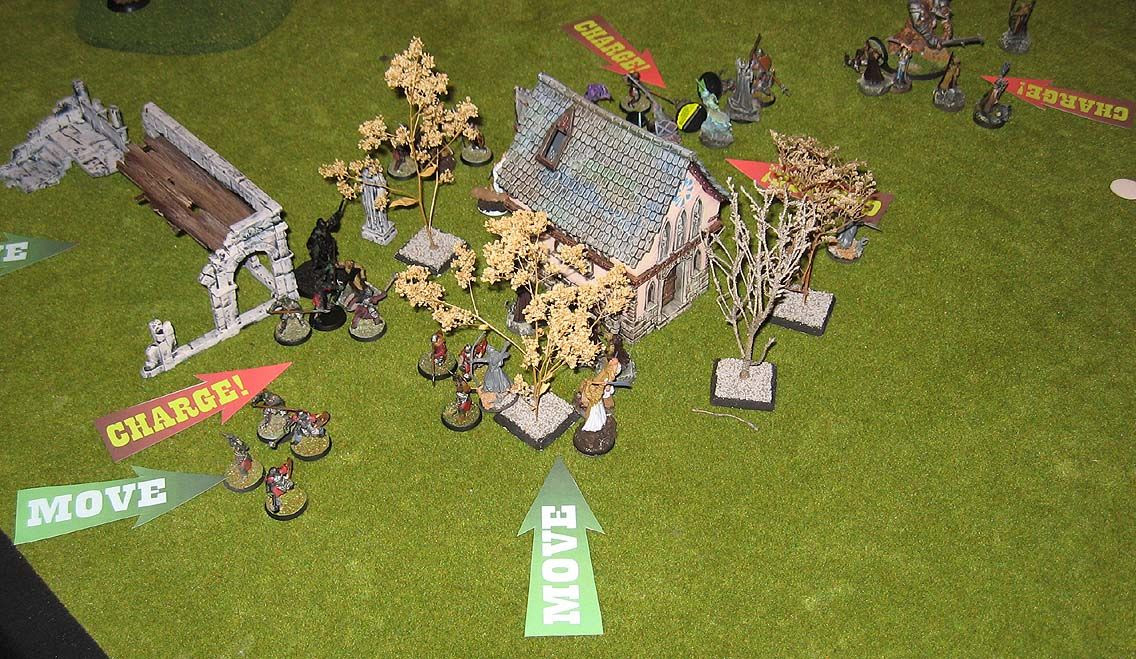 That really wasn't too horrible, since it meant that they were not advancing towards the scoring board edge.

This wider view image shows the troll on the ground, and the wargs running away after the riders were tossed. 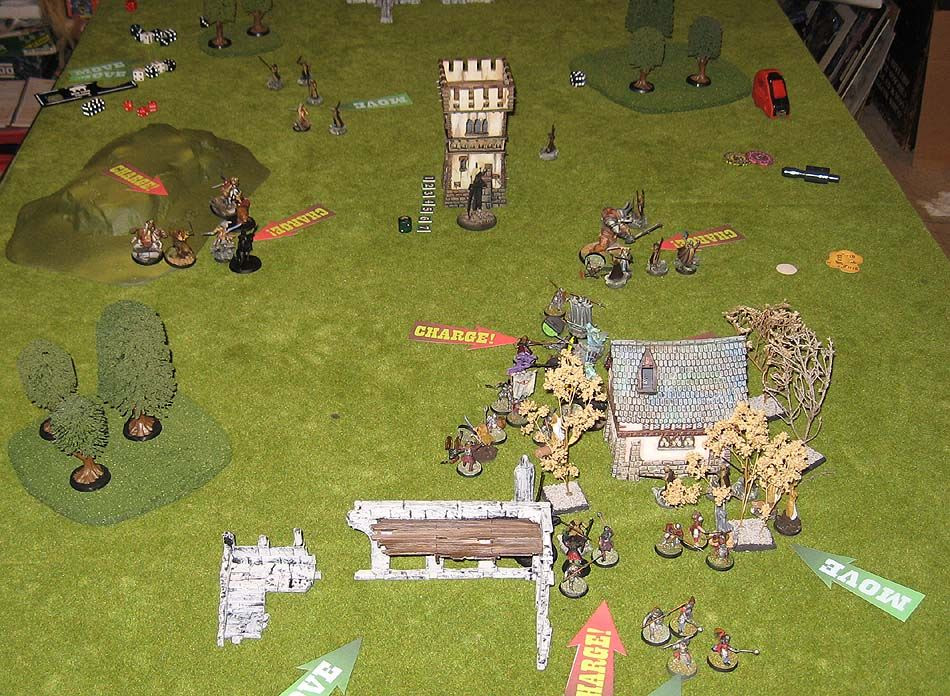 At this point, we would begin another huge run of priority for the evil side.  I had to expend whatever might I had left to cast the Wrath spell again to knock down that same batch of orcs.  The stormcaller on this side had been fortunate enough to roll a '6' each time he cast it, so I was able to get the will back.  My second stormy was not so lucky... 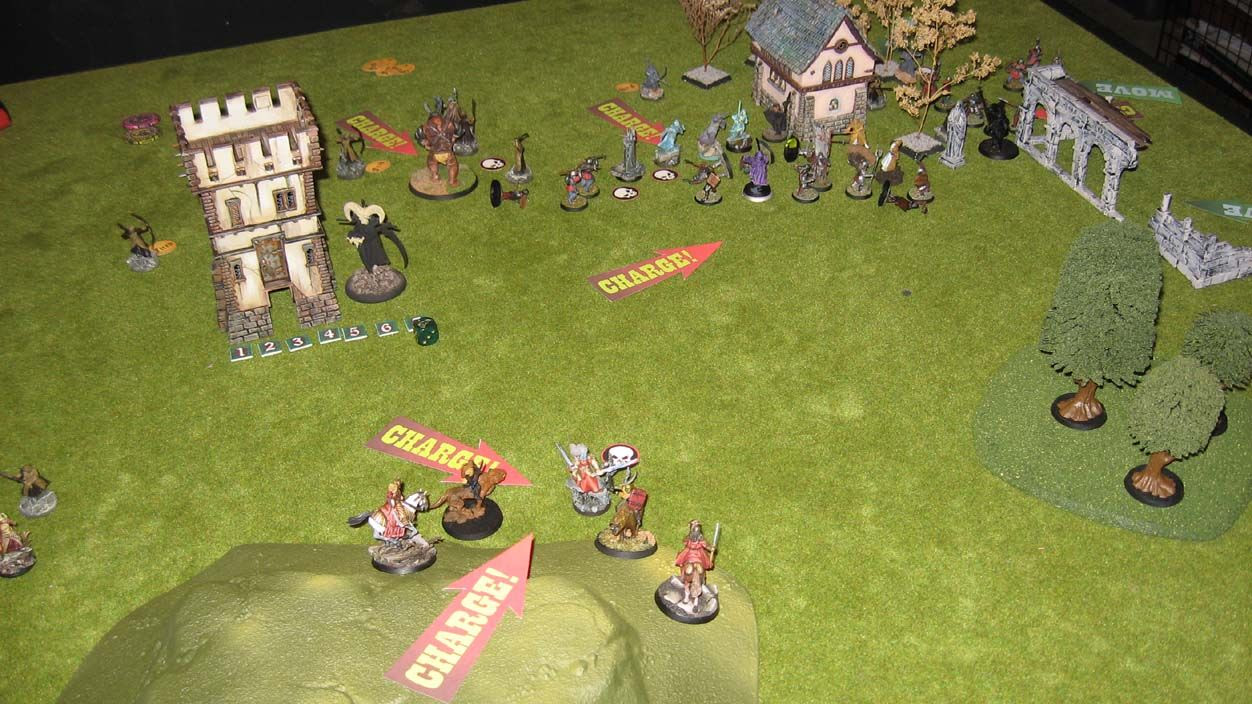 So, after a few turns of no priority, the troops on that side of the board get more and more surrounded.  I did manage to kill a few of the orcs that were down, but I could never get to squeeze the shaman (good job by Rich!), and Fury proved to be very valuable, as it usually does. 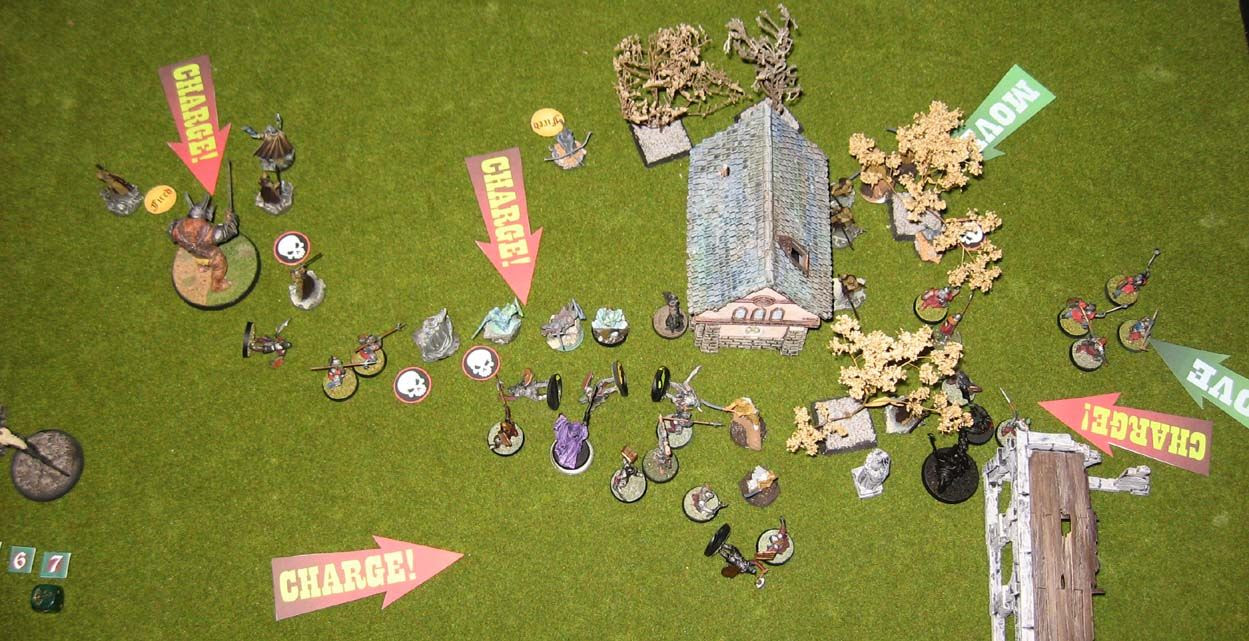 My group is holding its own, but that is soon about to change.  However, my elves on the far side of the board have killed off the last of the wargs, and are about to march off the board.  The timing is going to be delicate, as I don't want to break too early, but I certainly want to drop down to 25% at just the right moment. 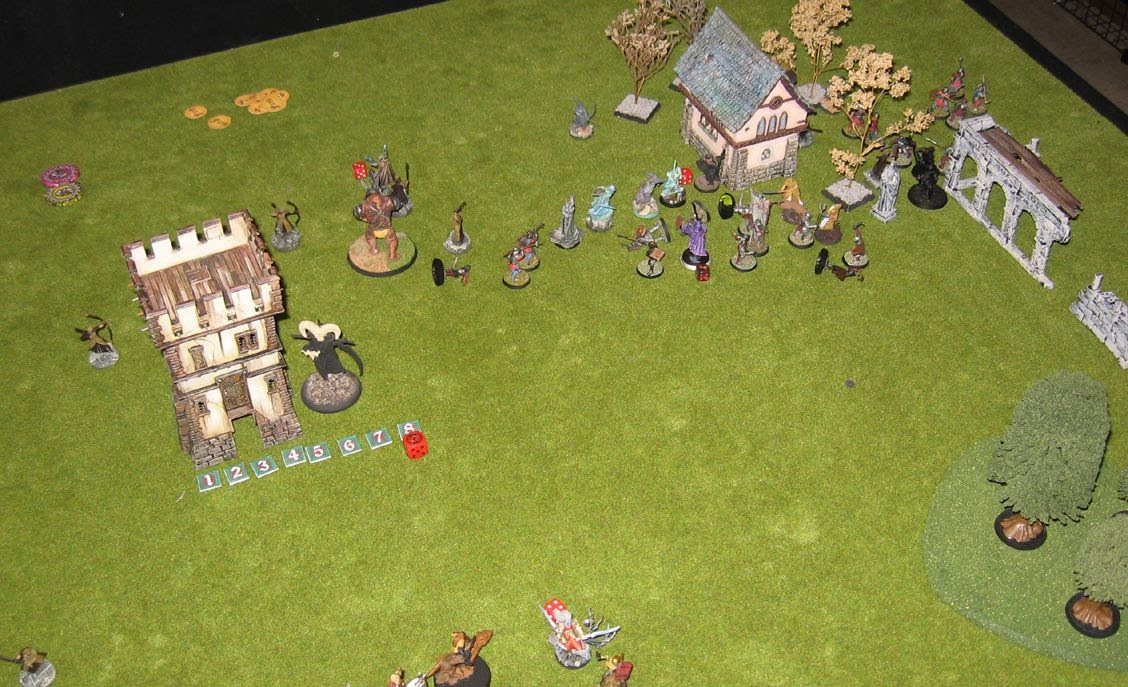 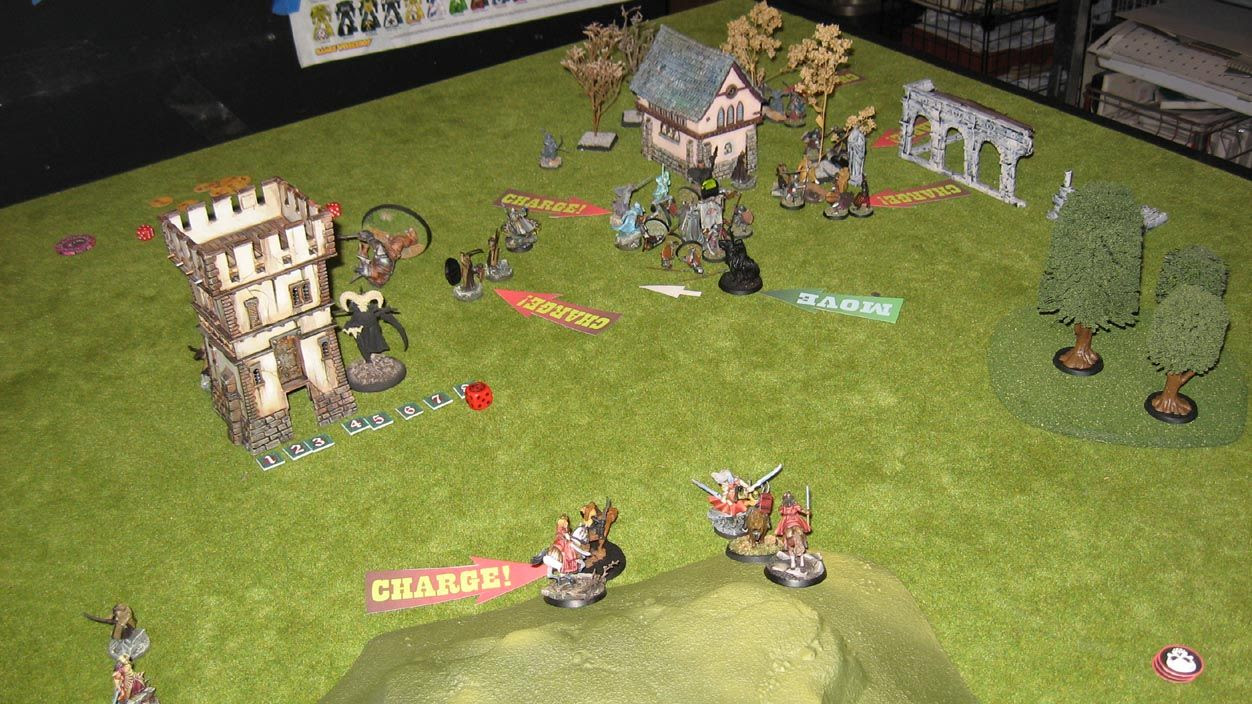 We realized that I made another error by getting greedy with the archers, trying to move them into position for pot shots, getting them just close enough to the downed troll to be charged (it was less that a quarter inch difference).  Those two should have been off and running towards the scoring board edge.  Instead, they got whacked by the troll.  There were a few failed courage rolls on my part that kept the troll and the Undying from being engaged, giving both of them critical freedom of movement. 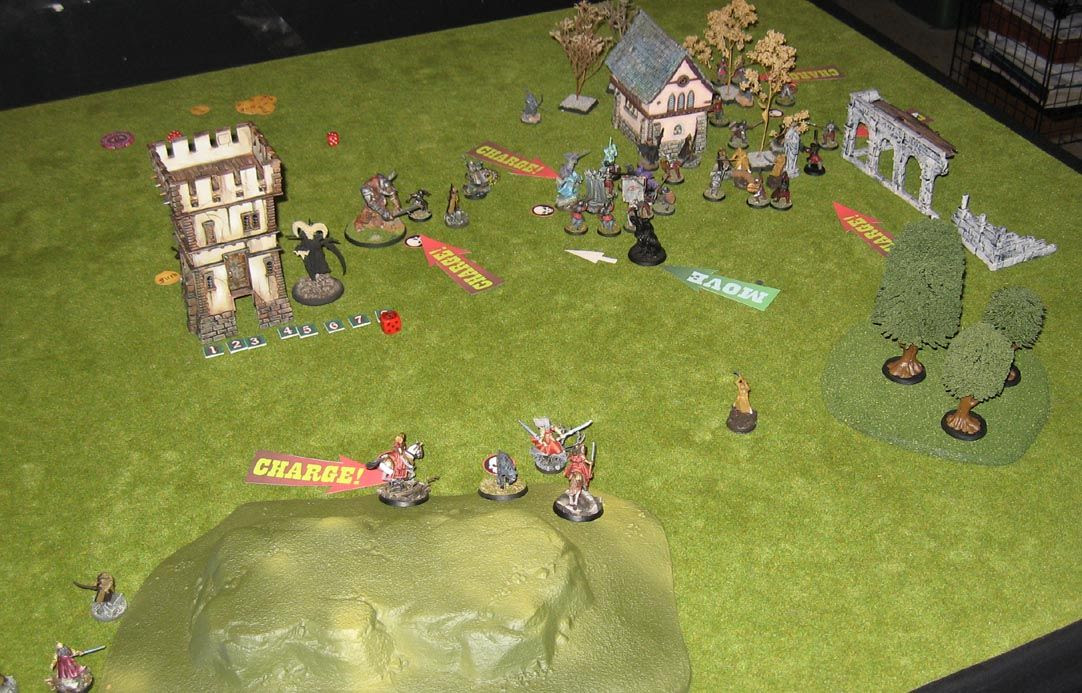 At this stage, I was left with only desperate charges.  I could not get priority, and there was no way to move away.  The King was now getting exposed to multiple attacks, and the low fight skill of the Dead would be very costly.  Normally, the Elves engage in those same fights to get the fight skill 5 into the mix, but that does not work when you are outnumbered! 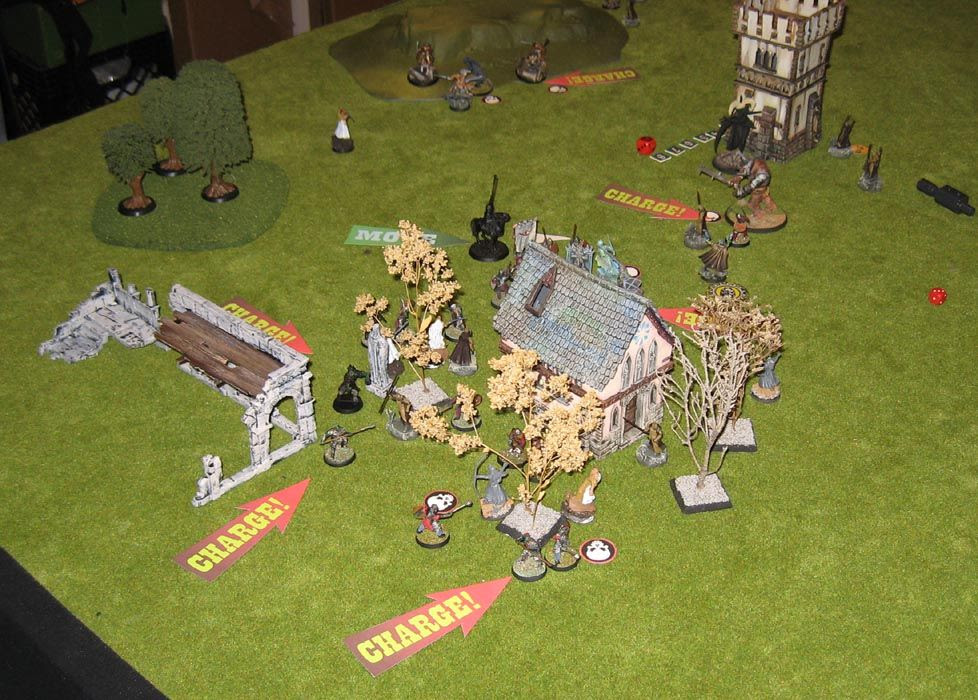 We are now nearing the end of the game.  This turn will end very badly for me, leaving just a few figures left. At this moment, all of the unengaged units are leaving the scoring board edge. 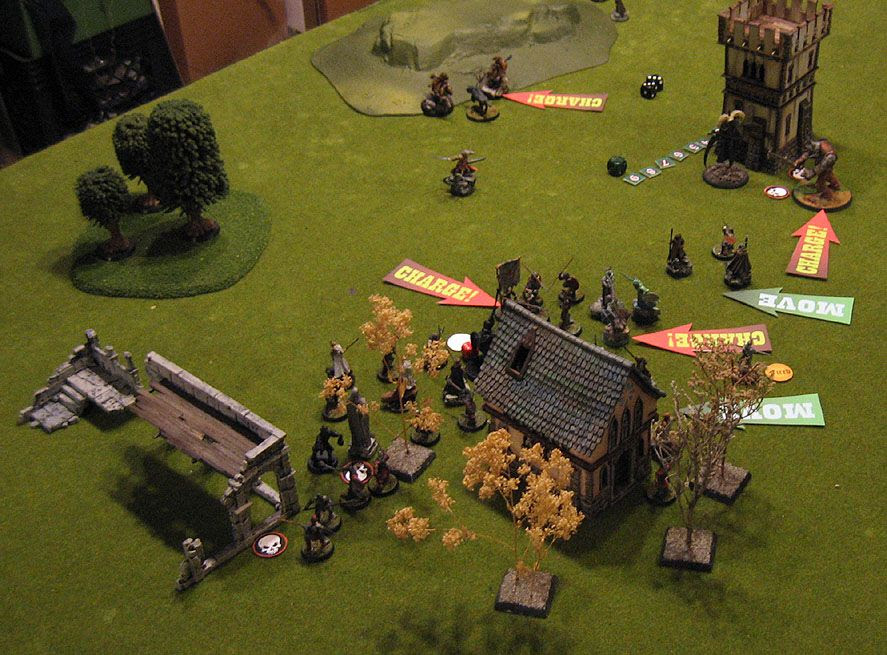 What remains of the Good forces here will now be mostly wiped out, except the stormcaller survives multiple attacks by the troll! 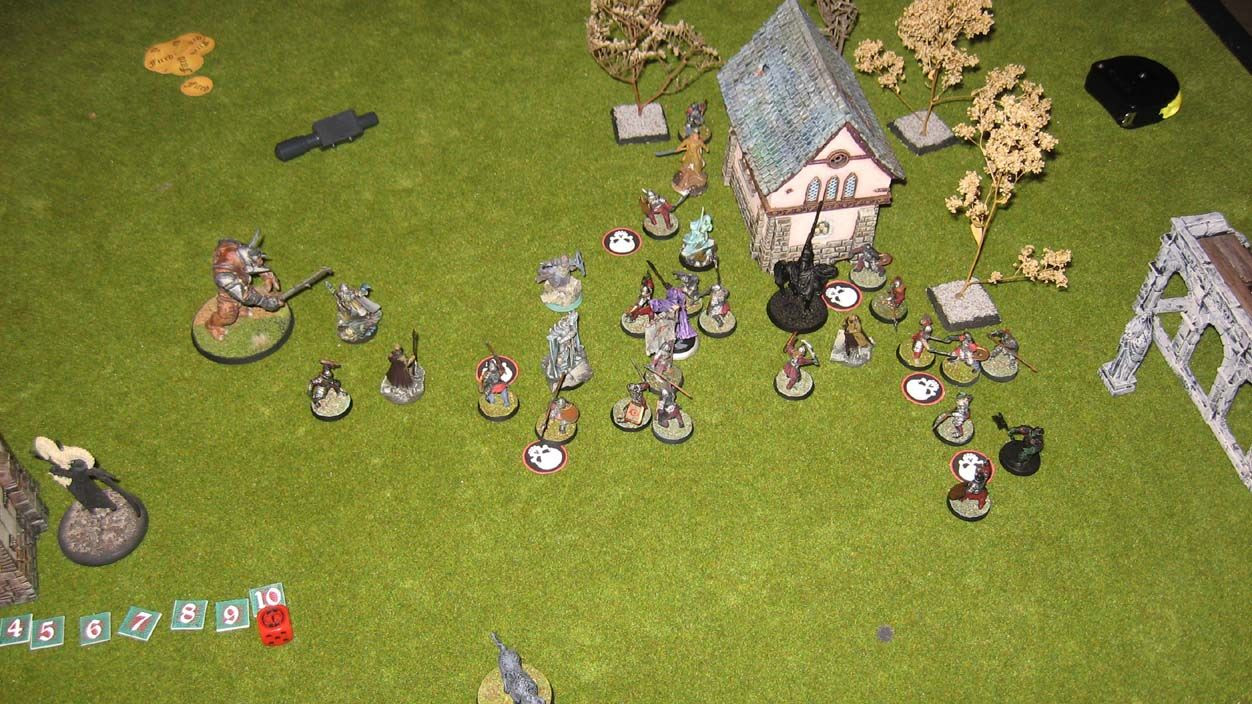 Lots of casualty markers where there used to be elves... :-(

Somehow, I don't have images of my biggest mistake... one that would cost me a win.  I took the King of the Dead (one wound remaining) and went after a free orc.  That was a huge mistake, since I had the orcs 7-1 on recon points.  They obviously got the +3 for breaking.  Had I not done the stupid move with the King, they would have only gotten a +1 for wounding him.

Instead, I was a idiot, and generated 2 more VP's for the orcs, making the game a draw.  Rich had stuck to his original plan, but I had deviated enough from mine at key moments to lose my advantages.  We always emphasize NOT doing that, so hopefully that will make me think twice about doing that again!

Thanks again to Rich for doing this test!  Each of the 3 games has been very close (2 draws and a 1 point win), with every move being vital along the way.  Unlike Warhammer Fantasy, where getting tabled in 2-3 turns is possible (if not the norm these days), this was a 12 turn slugfest that went back and forth.

I hope it was interesting for all of you!

Posted by wappellious at 9:49 AM 2 comments:

Learning about Recon scenario in Lord of the Rings: Part One 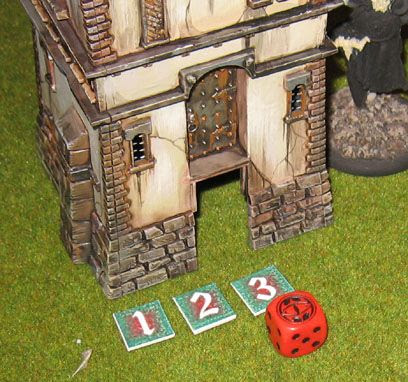 As advertised, today was another tournament prep game with the Knights of the Blood Rose and their erstwhile allies, the Army of the Dead.  We have been debating quite hotly not just their purpose on the table, but if they are even worthwhile.  They seem to be less effective with each game.

Of course, they would have an easier time if they got priority once in a while! :-)  In this game, the evil side (orcs led by the Undying), had priority  for 8 of the 12 turns.  Since the King of the Dead has no might, you have no way to mitigate those unfortunate priority rolls.

I had priority the first 2 turns, which was hilarious.  Here is what came onto the board for the entirety of turn one: 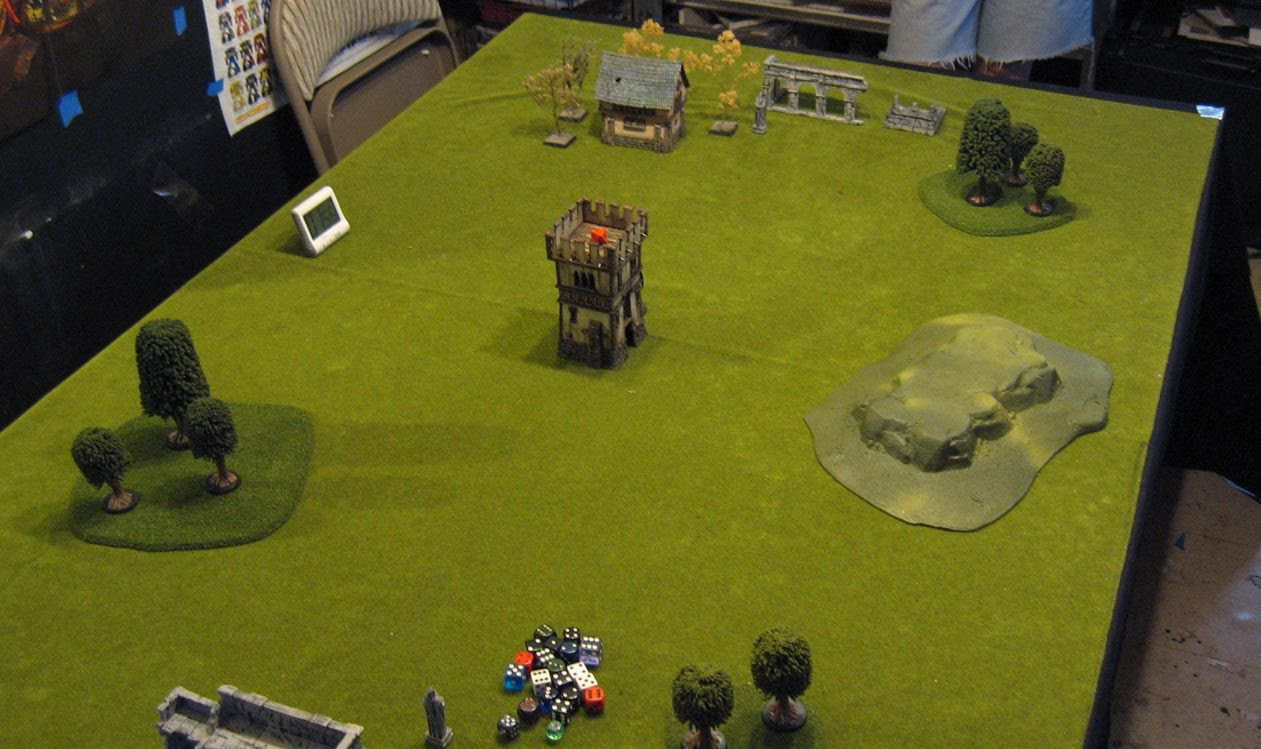 Yes, that's right, not a single warband showed up!  Not much good having priority, which I got again on the second turn.  In contrast, all units on both sides showed up fashionably late in this turn. 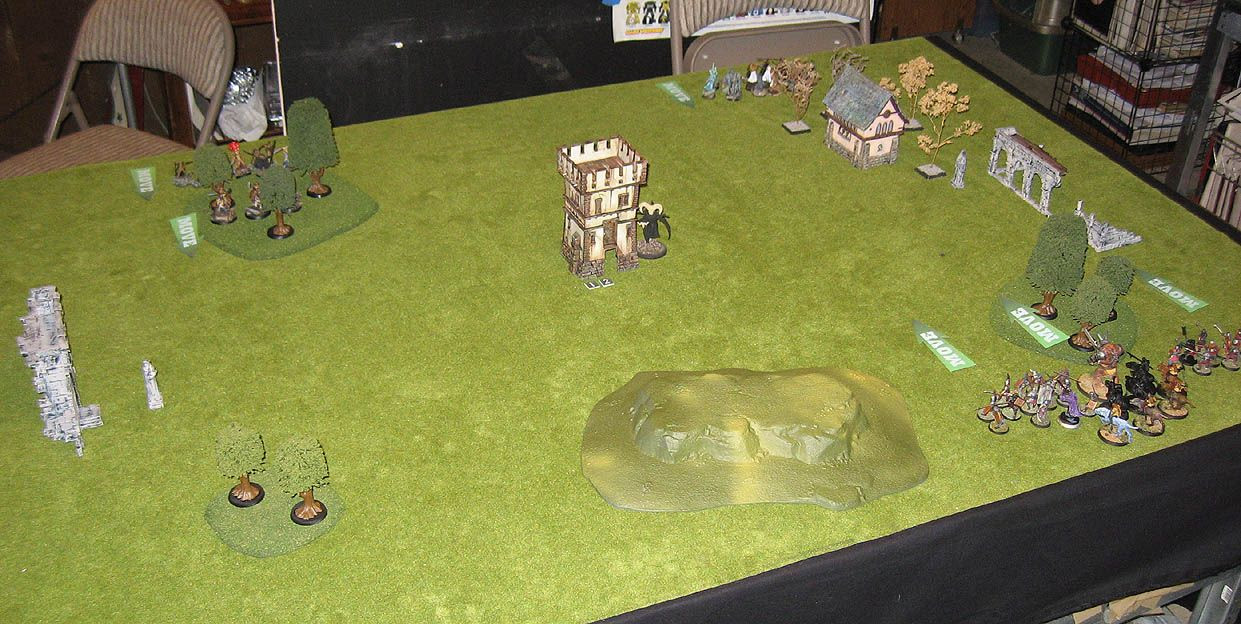 Turn 3 was all about moving.  Knowing that getting stuff off the board was the easiest way to get the VP's, I headed most of my right flank towards the enemy deployment zone. 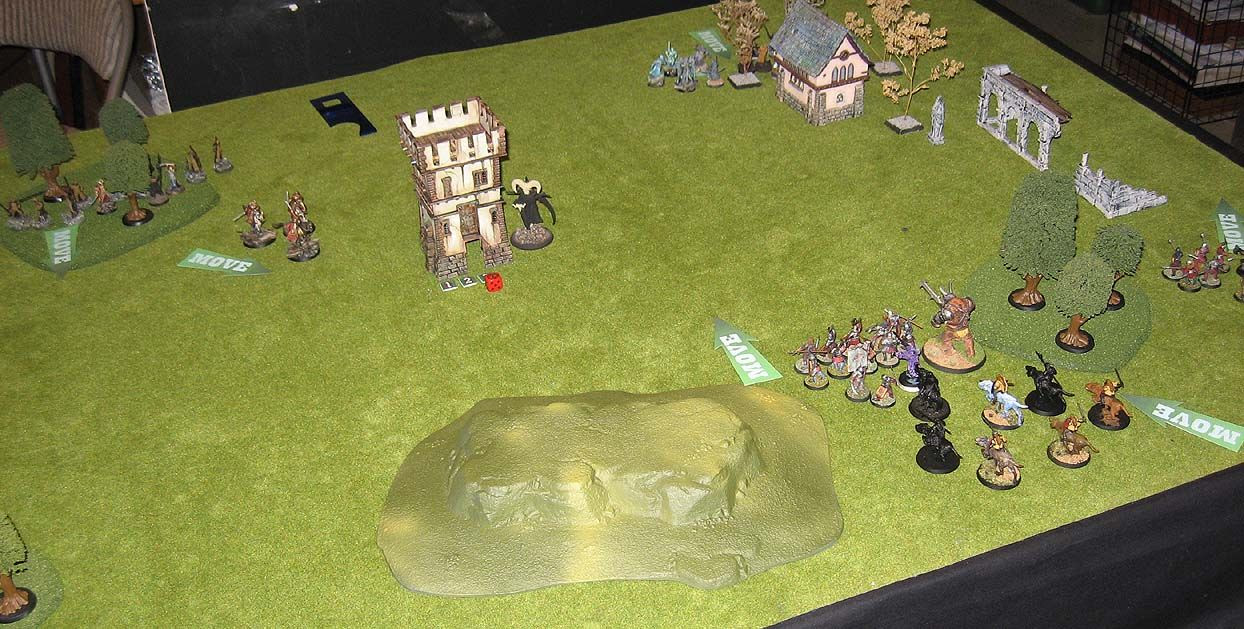 Most of Rich's guys headed straight at my warbands of elves and AotD on my left side.  My plan was to use them as a holding force, keeping him occupied, dying slowly enough to let my other group get off the board just as the 25% casualty limit hit.

This was part of a 4 turn priority run for the Evil side... 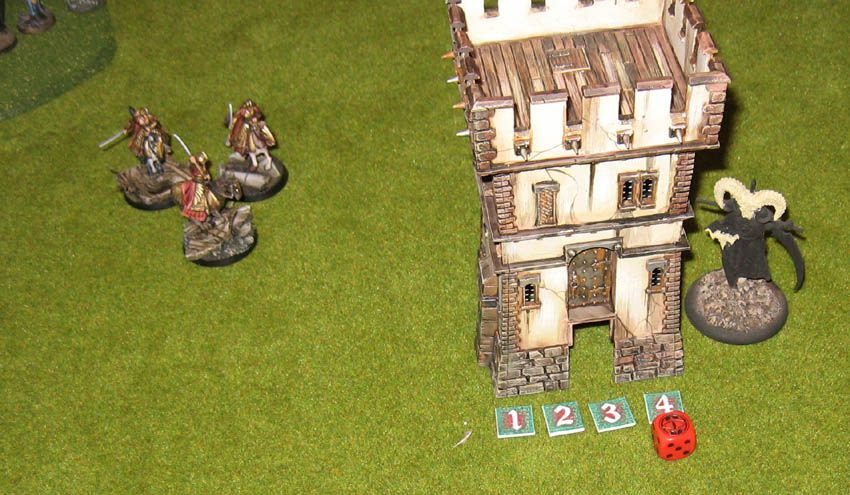 Rich moved most of his forces in unison towards me.  I tried to hide the stormcaller behind a building from the Undying, while a few of my archers on the right peeled off to take pot shots at the wargs.  The second stormcaller was with them as well. 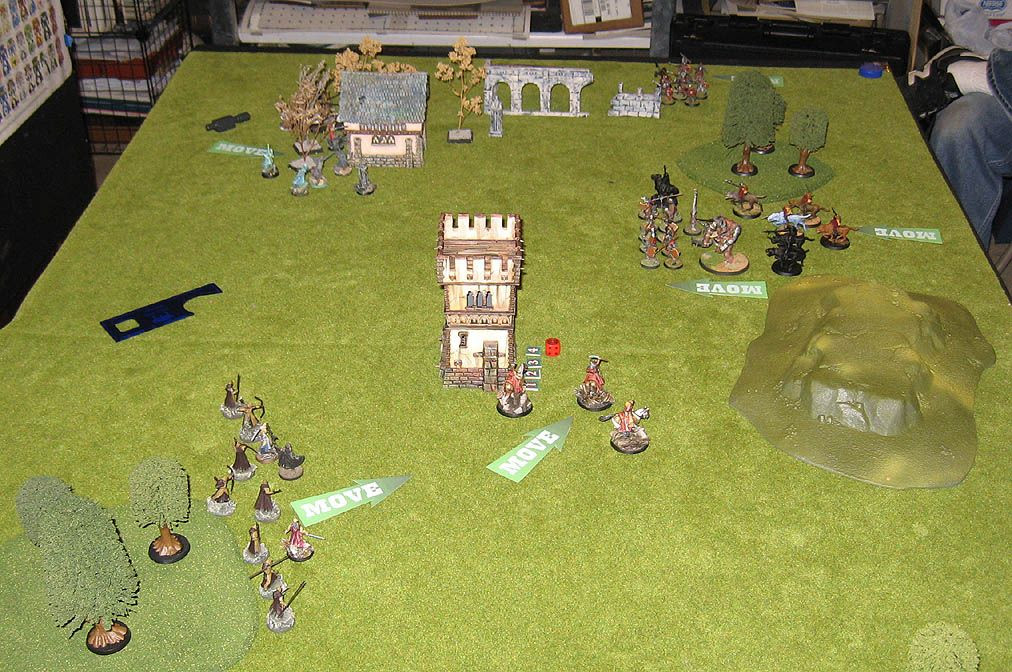 Here's my group in the amongst the buildings.  The King and some archers poked their heads out a bit so see what spells they might draw from the Undying.  Had to make him use up those 20 will points somehow!! 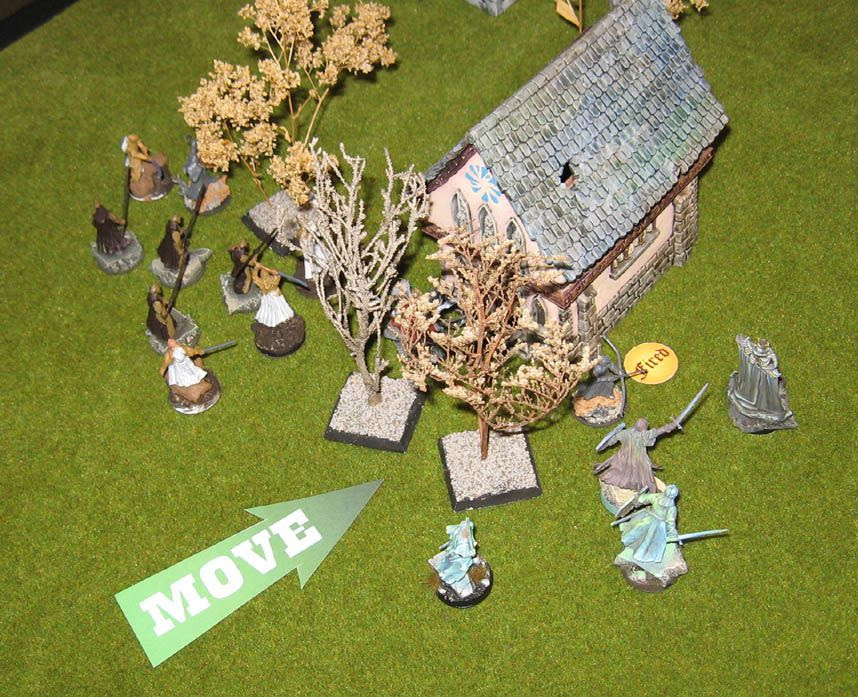 Here you are seeing some of the first action.  The charges went badly for the elf cavalry, with Seregond the Captain being unhorsed.  All archery fire was useless the entire game, barely hitting much less wounding..  I had taken away one AotD to get enough points to add an archer and a swordsman.  I question that a bit now... 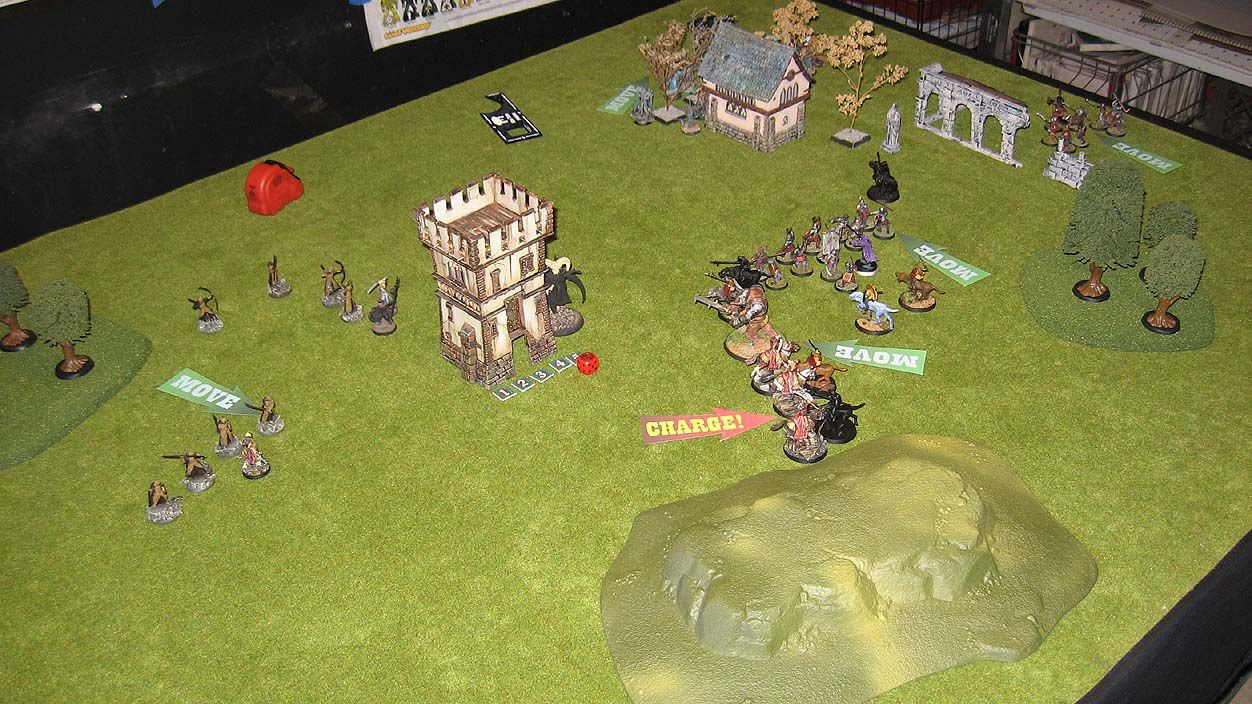 Rich's troll and a few wargs headed towards the middle of the table towards the stormcaller and the archers.. 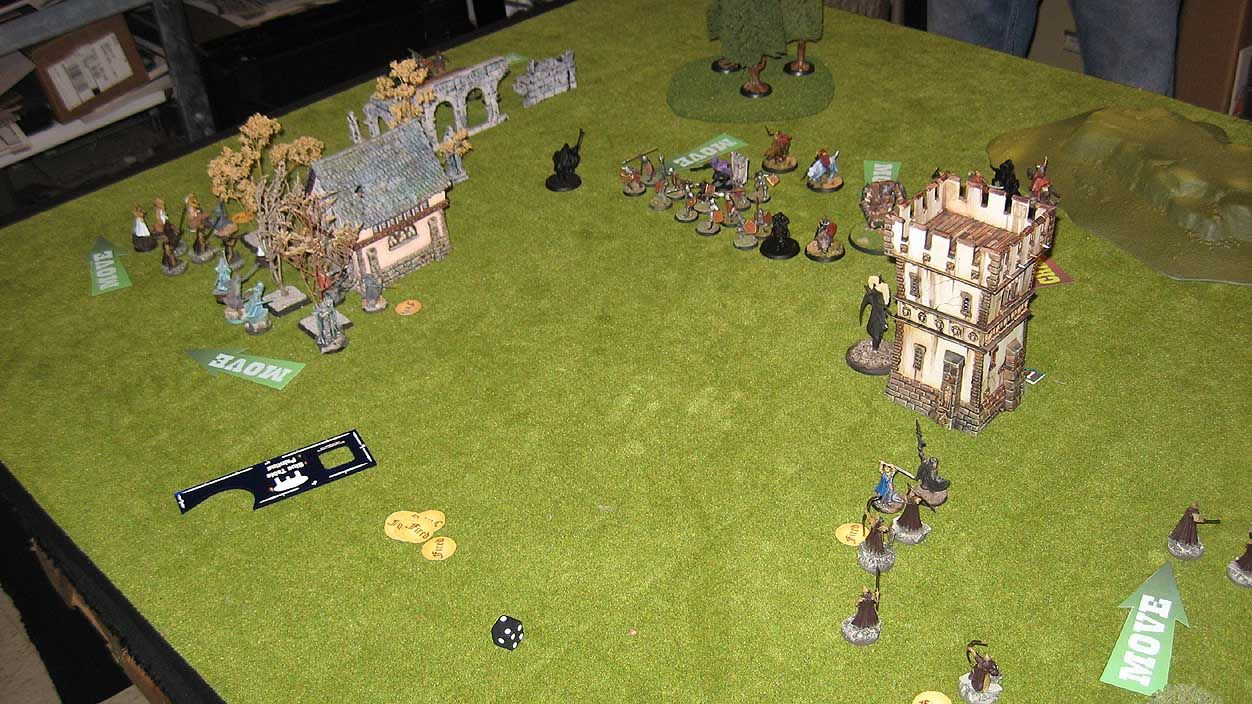 Here was another charge that ended a little less badly for the elf cavalry against the wargs... 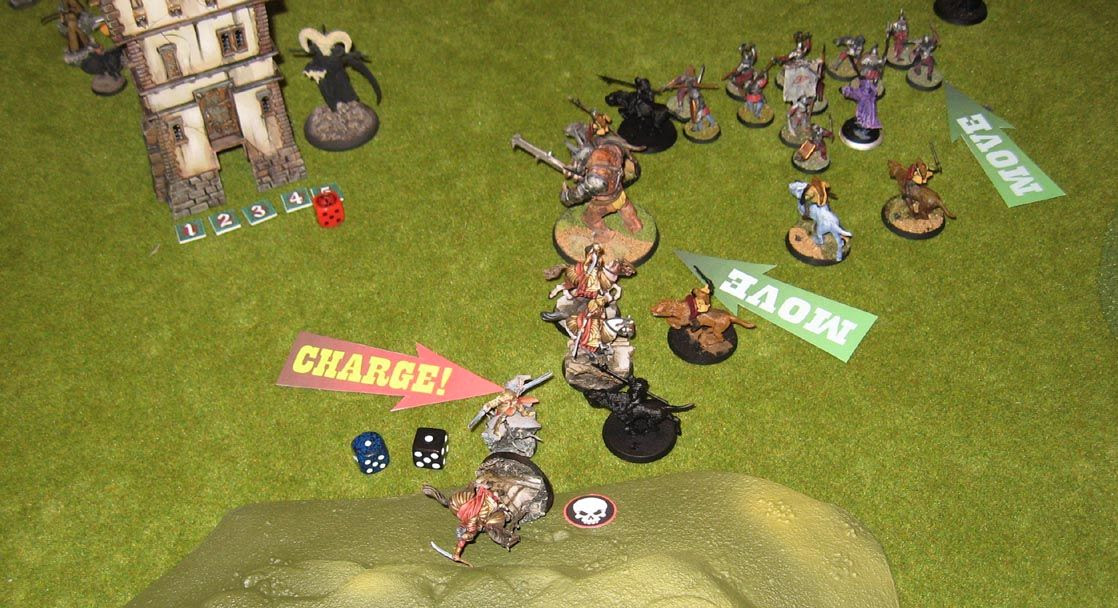 Feeling like I had to make something happen, I decided to go for broke with both stormcallers.  Each of them did their nature's Wrath or whatever it is, knocking down lots of orcs, wargs, and even the troll! 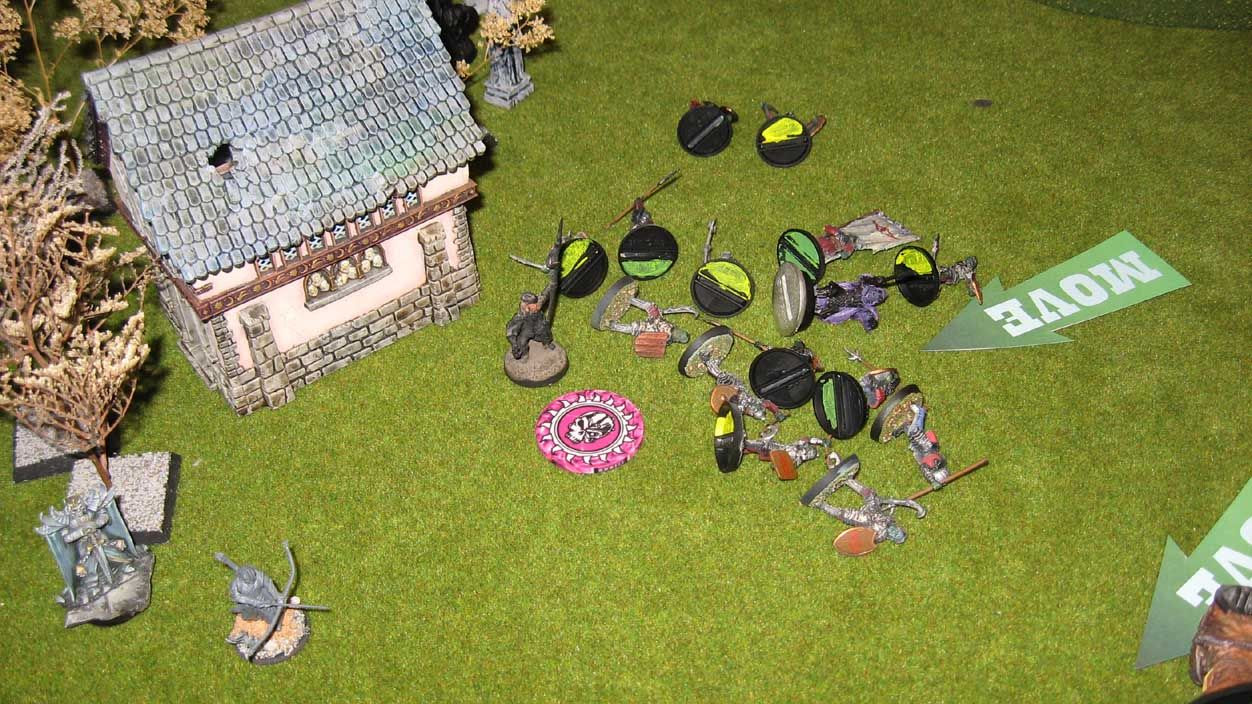 Unfortunately, I was not really set up to take advantage of that situation in terms of jumping on the downed troops and killing them.  However, it was all about buying time, and I kind of forgot about that.  I tried to kill off some of the downed orcs, and that caused problems in subsequent turns.  Instead of backing away, I mostly charged in. Without priority, everything on that side was eventually surrounded (you will see this play out in part Two tomorrow!) 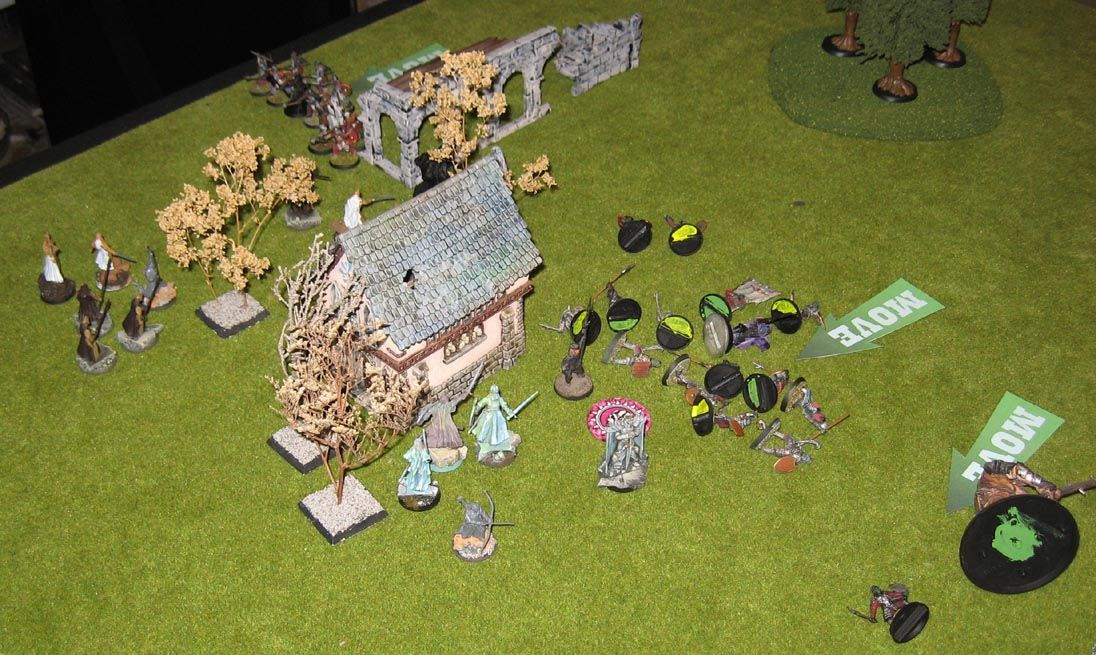 Meanwhile, my group of elves was working its way to the orc deployment zone board edge.  They would wait there until just the right time to "step off" so to speak.  The pesky wargs and riders took longer to kill than fight skill five should have allowed... 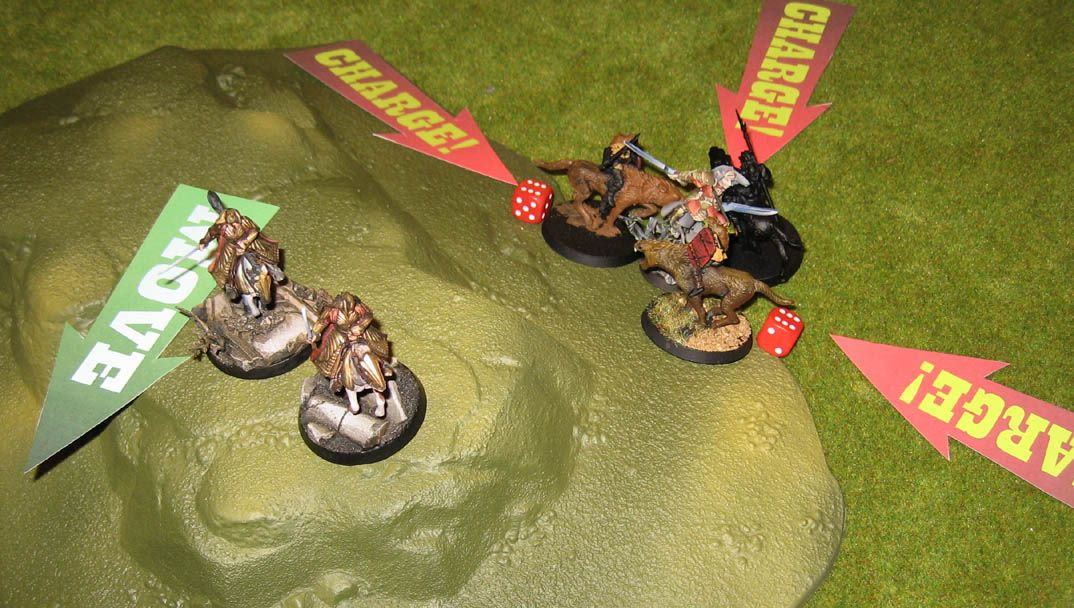 Well, after a very eventful mid game turn, It was time to eat some chow!  No elven bread, for sure!  Rich kindly brought meatball, sauce, and noodles. 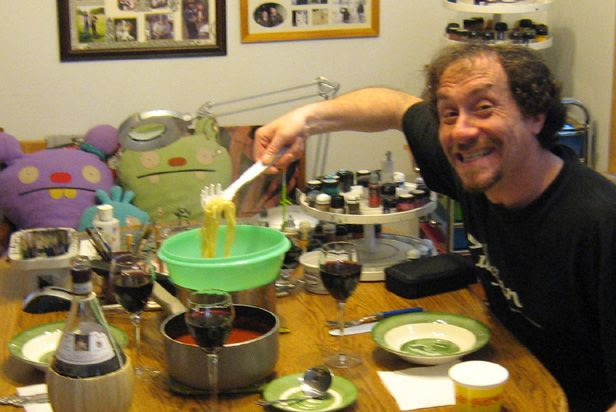 Cathy worked her magic with the food, and we all took healthy swigs from the jug of ale!  After a while, it would be time to get back down to business!! 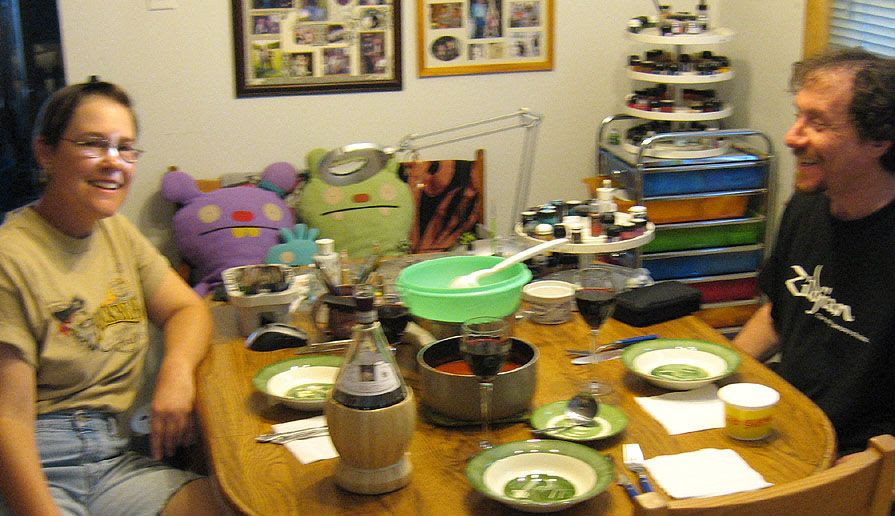 Stay tuned for the exciting conclusion of the Great Skedaddle scenario!!
Posted by wappellious at 2:55 AM No comments: