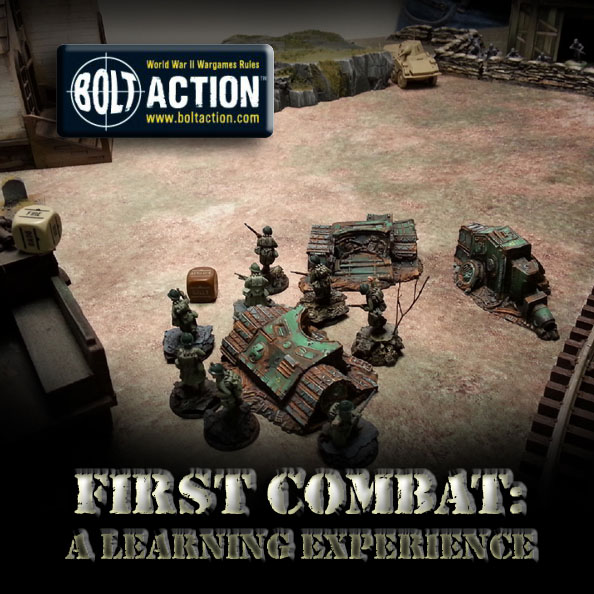 A while back, we got to have our first experience playing a game of Bolt Action.  All of us are still learning the system, and the various aspects involved with it.

Terrain is still being made, armies are being worked on, so this test would have to be done with whatever we had at the time.  I picked out some Burn in Designs buildings that I felt could work as some kind of French or border village, and added the rails too.

The oil rig is also from Burn in Designs, and the sandbag sections are from Secret Weapon miniatures. 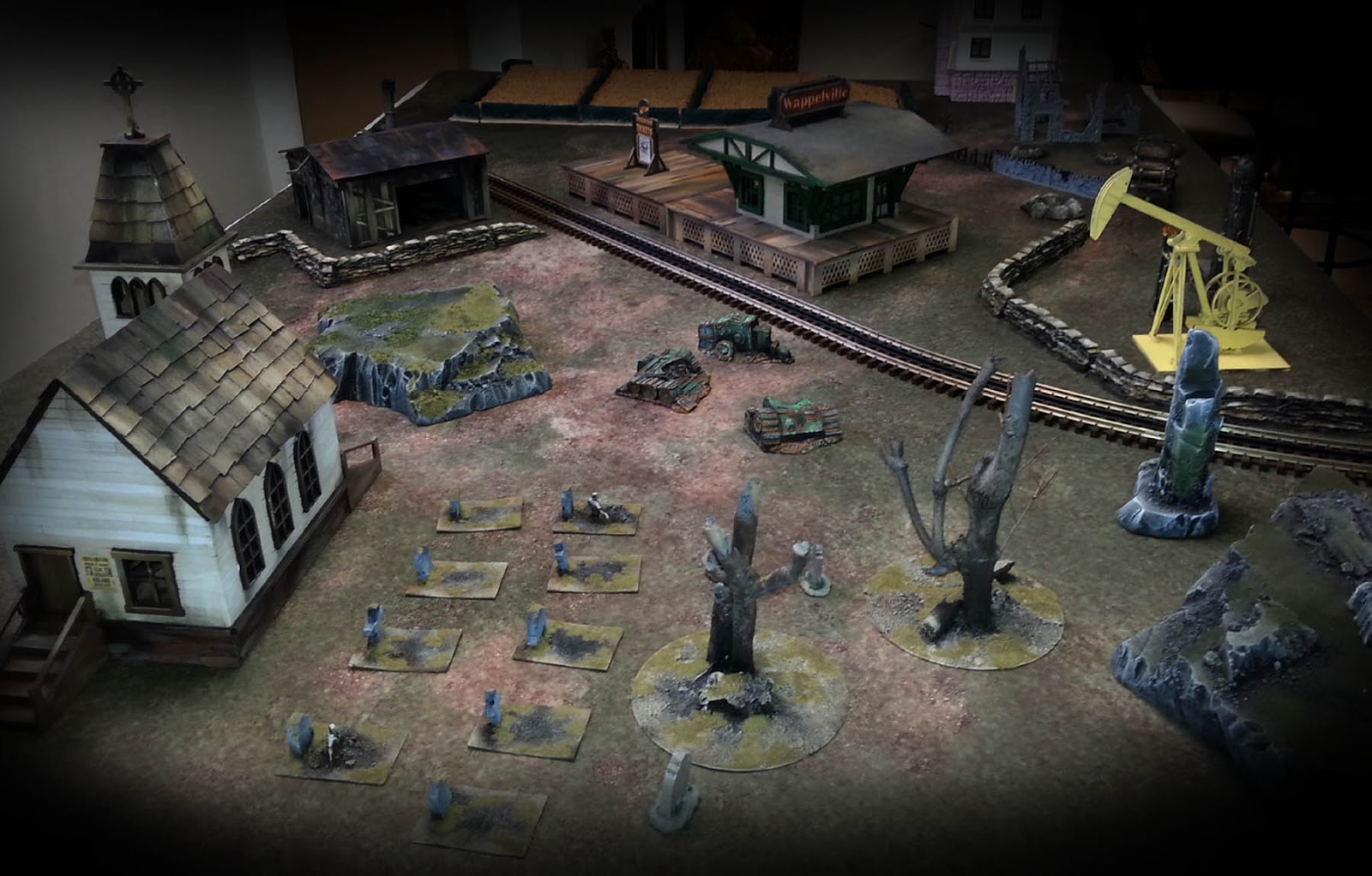 We have been assuming that line of sight blocking terrain is just as important in Bolt Action as it has been in Wild West Exodus, so that was my priority here.

Dan made the farmhouse in the corner, and the field sections that went with it.  We even have a few of the Bolt Action ruined buildings.  It would have been nice for there to be more, but a test is a test! 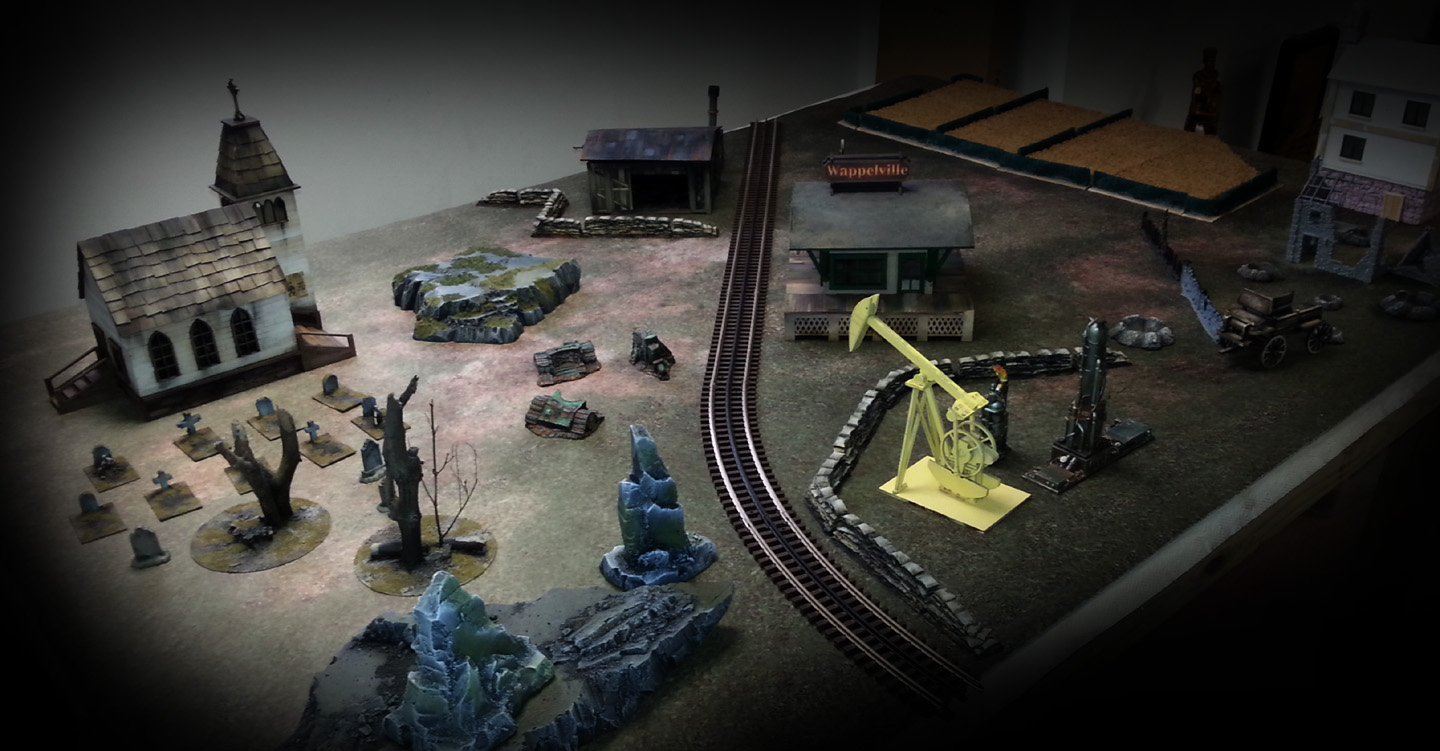 This was also the reason I scratch built those Laffly trucks!  I would get to see them at work as well. 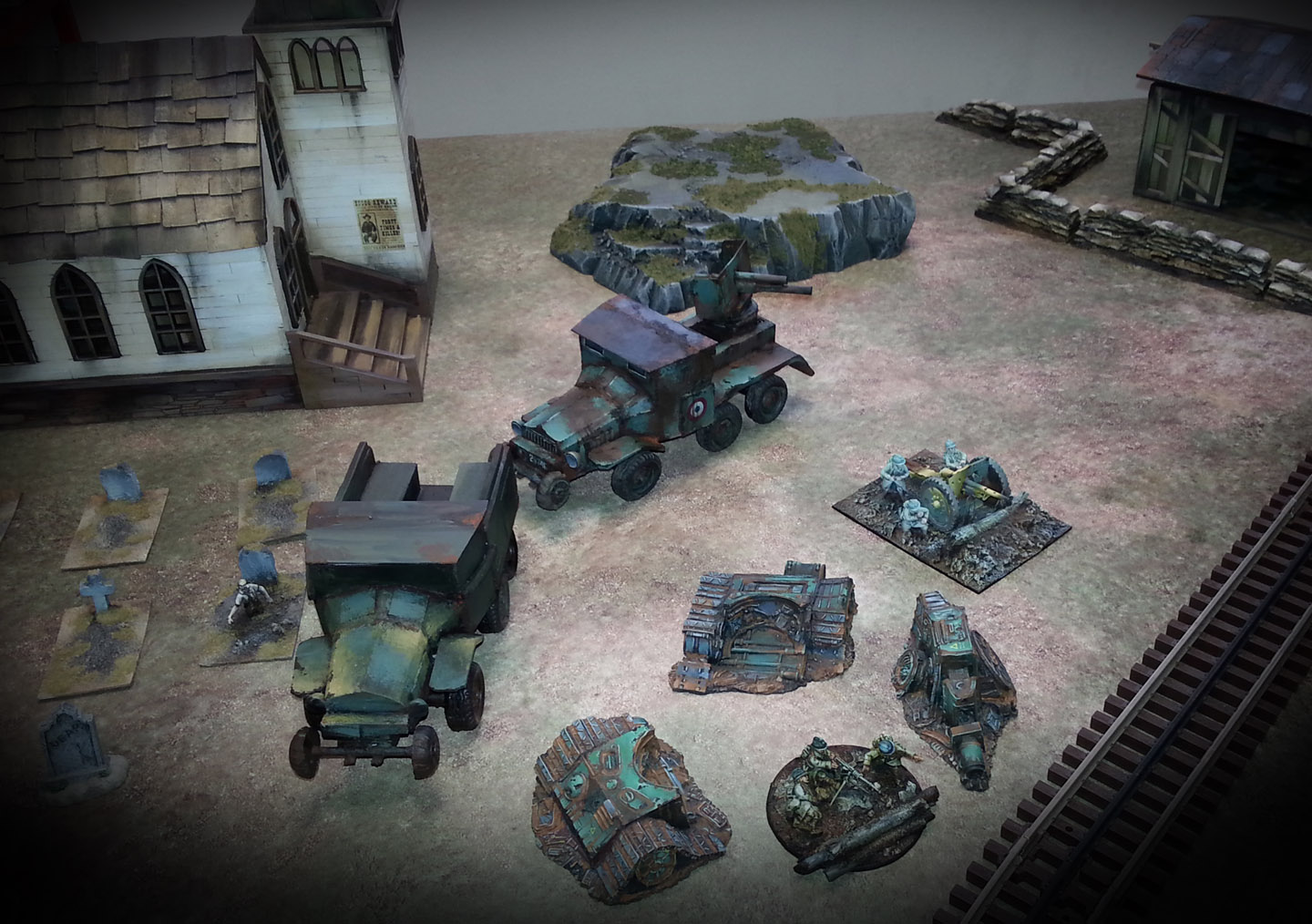 We went with a 3 objective scenario, a clear attacker vs defender situation.  The farmhouse, rock formation and oil rig were the objectives.  The Germans would advance from one side and try to contest or take as many as possible. 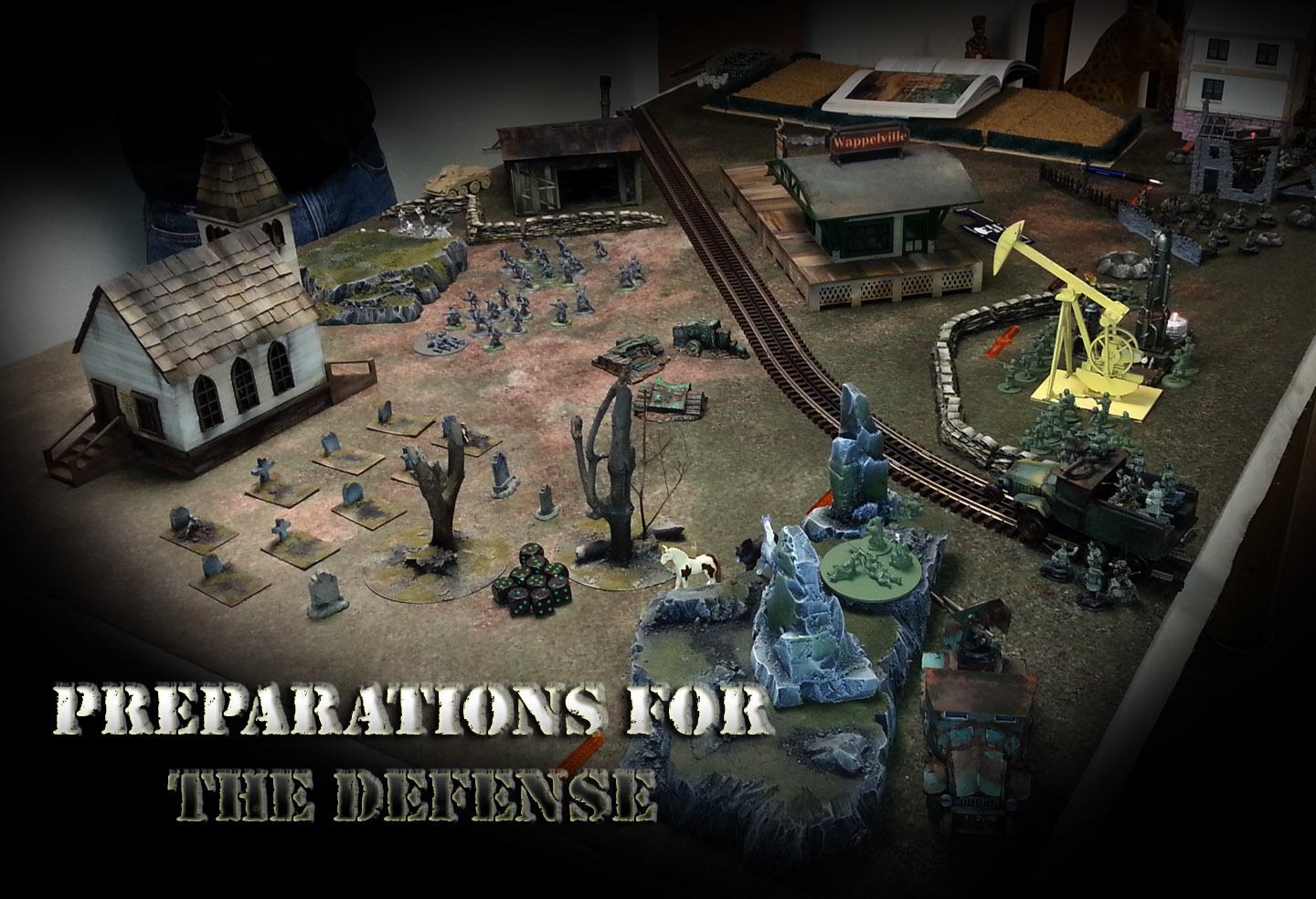 I tried to create some open lanes where things could advance, but they proved to be pretty dangerous if they were not traversed in a hurry, and in great strength.

Thanks to Dan's hard work, there are now a number of trees which can be placed in these kinds of open areas to make moving across the board at least a little easier! 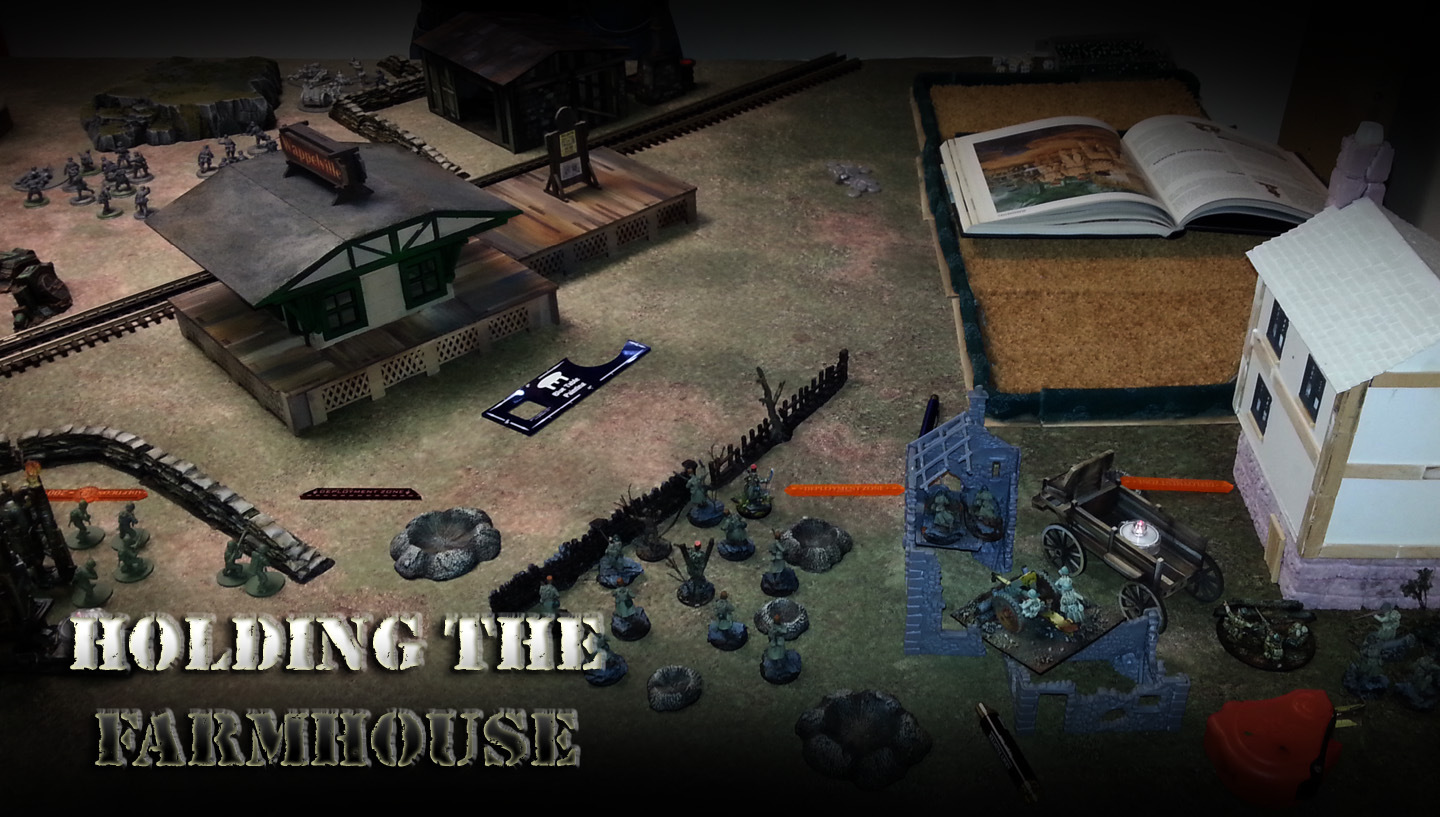 Since we were still getting used to the game, we didn't realize that the board didn't have enough LOS blocking terrain to allow for that advance.  I suppose we could have compensated by giving the Germans an additional 250-500 points or something along those lines.

Also, to try and involve as many people at once, Roy and I split the point totals for the Allied side.

His Allied army is the U.S., so we had a strange combination of forces!  Again, this was more about figuring out the rules together, and see just what kind of terrain would work best.

I was very happy, however, that the truck fit on the rails exactly as it was supposed to!

Laffly vehicles have two sets of drive wheels that come down so that they can ride on rails.  We see those types of pickup trucks by us all the time, since there are numerous rail yards nearby. 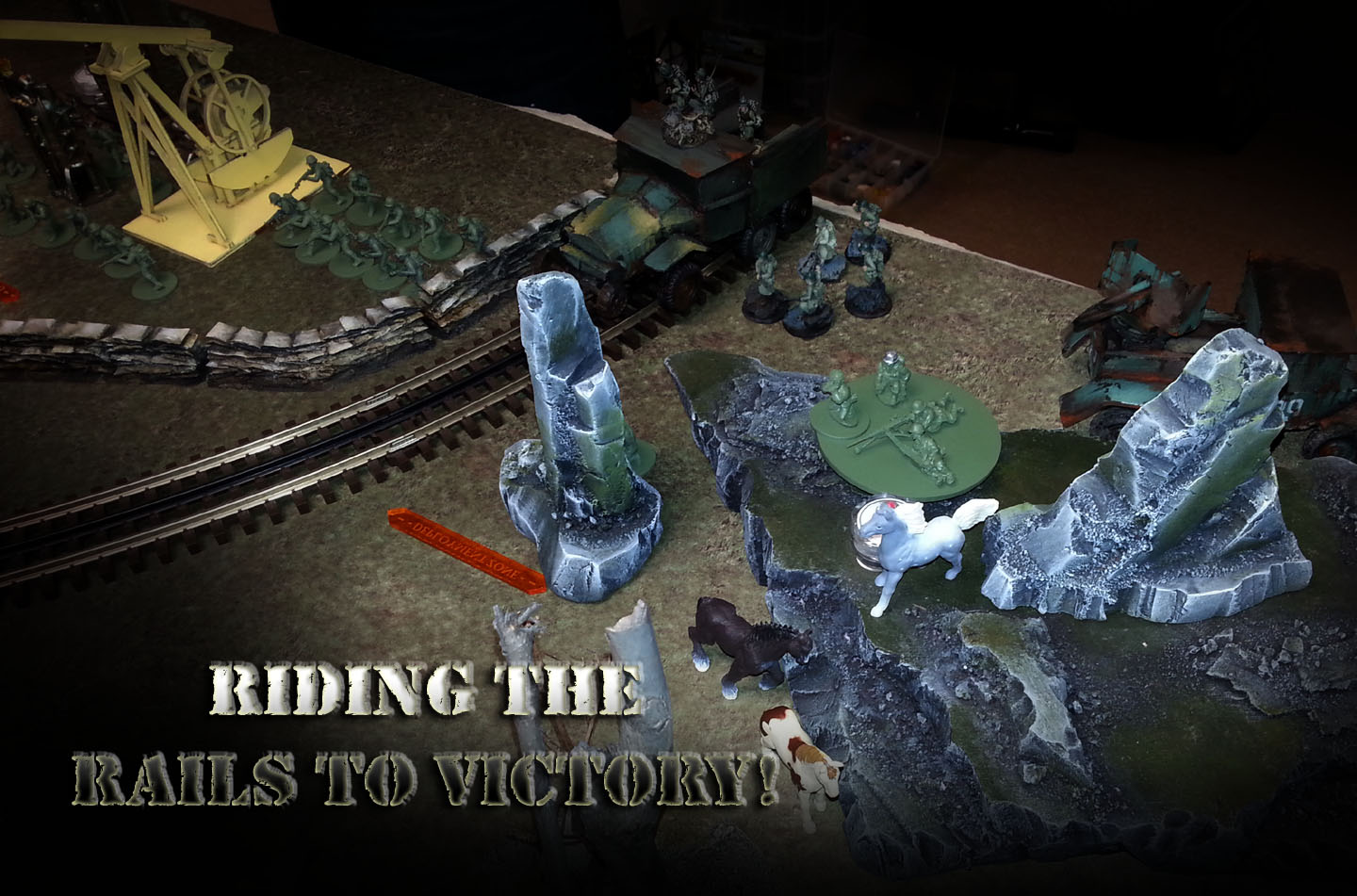 I had an anti tank rifle and a medium howitzer in the ruined house.  These did a lot of hitting and pinning early on of the few deployed German artillery pieces, and ended up securing that flank very well.  The machine gun had to run for 3-4 turns just to get into a firing position. 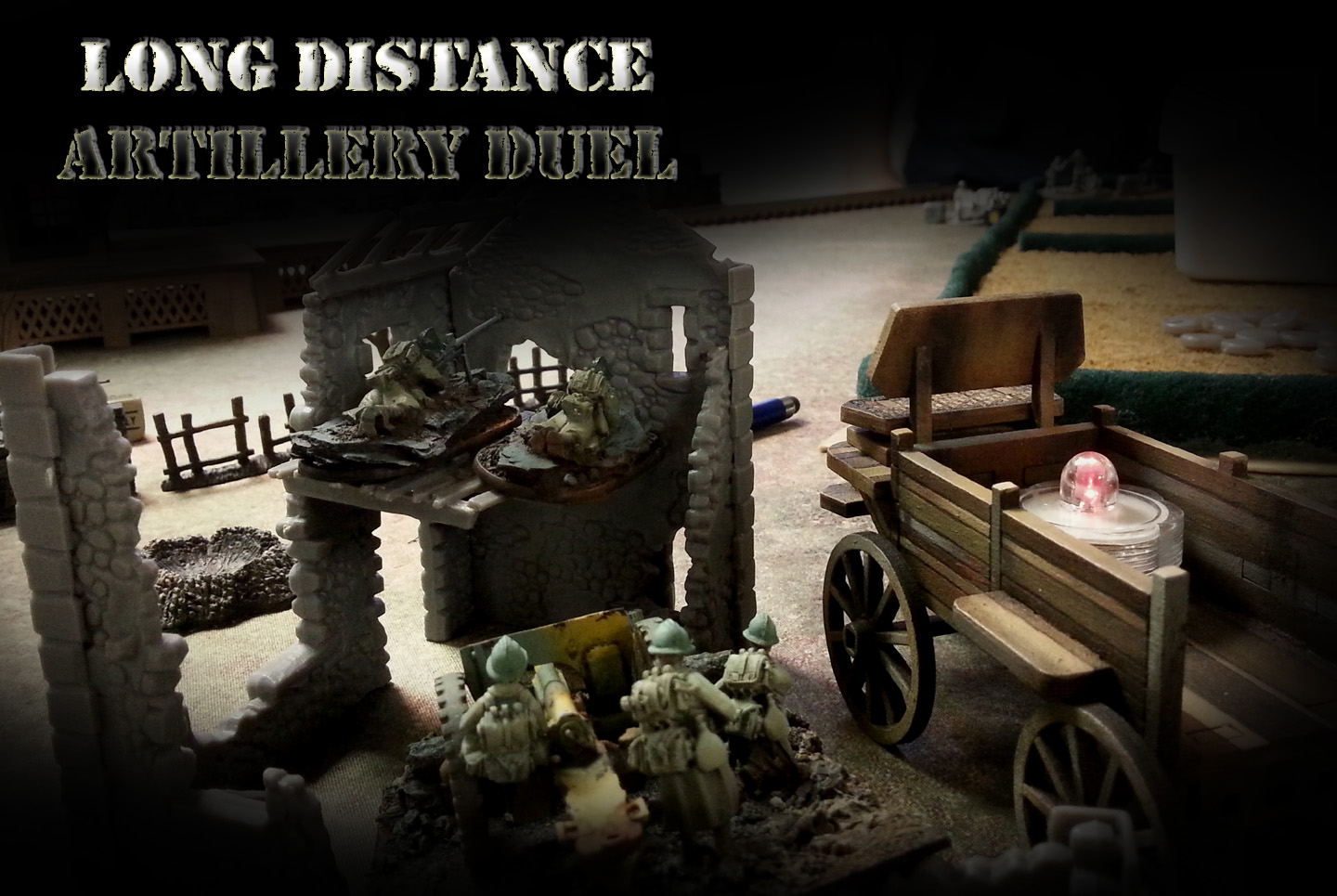 Most of the game involved moving things around to see what might happen.  I decided to move the veteran unit with the officer right up to the cemetery, because they had anti tank grenades.  I wanted to see what those could do, and it was meant to draw fire away from the Laffly with the anti tank gun behind the rock formation. 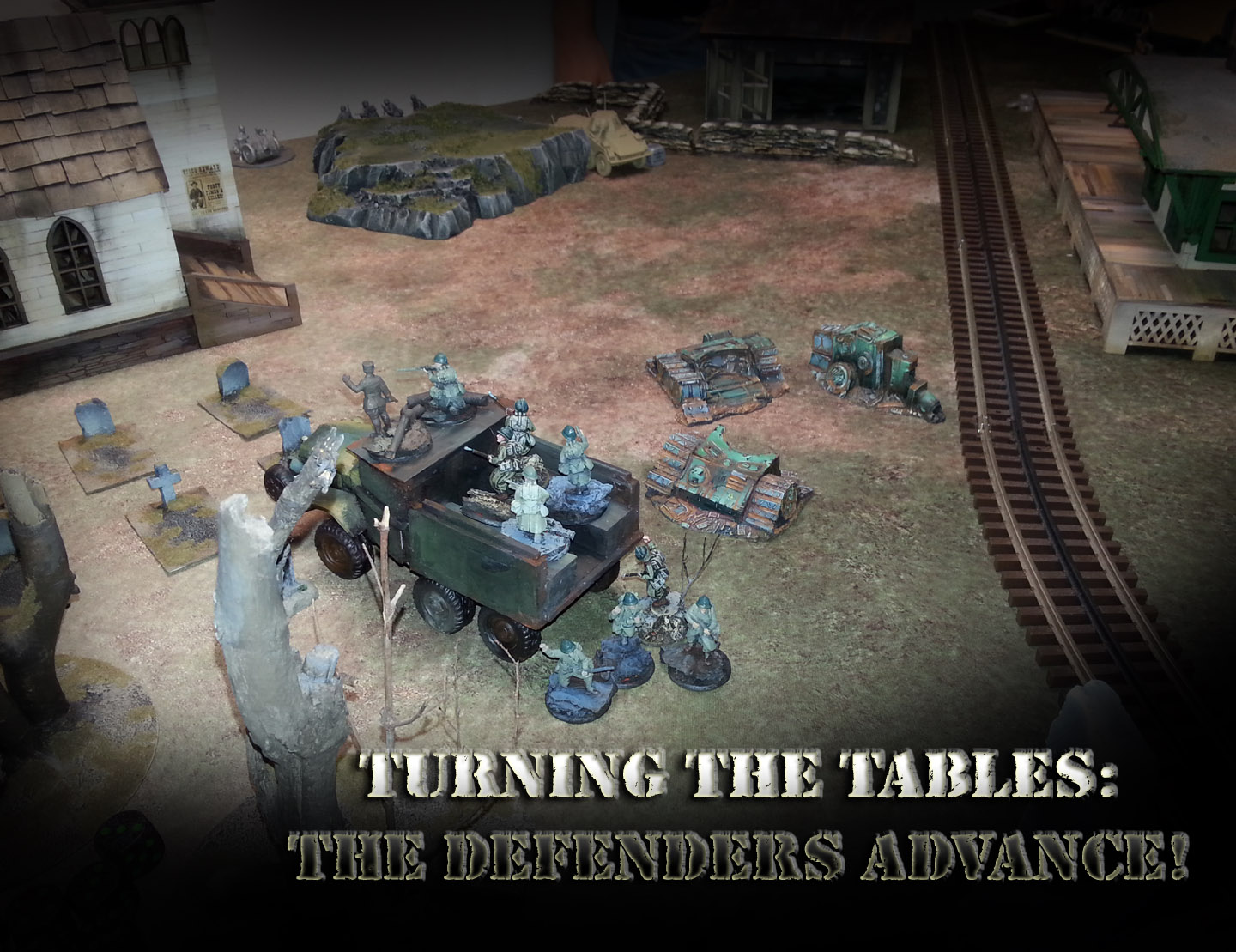 The Germans came on a little at a time, which we realized can't happen in Bolt Action.  It's difficult to get everything going in force right away, because of the order dice mechanic.

While it's great to have the defender pull off of their dice first, having a somewhat even distribution is a nightmare for an advancing force.  Each unit you bring on comes under fire right away, collecting pins at best, getting blasted at worst. 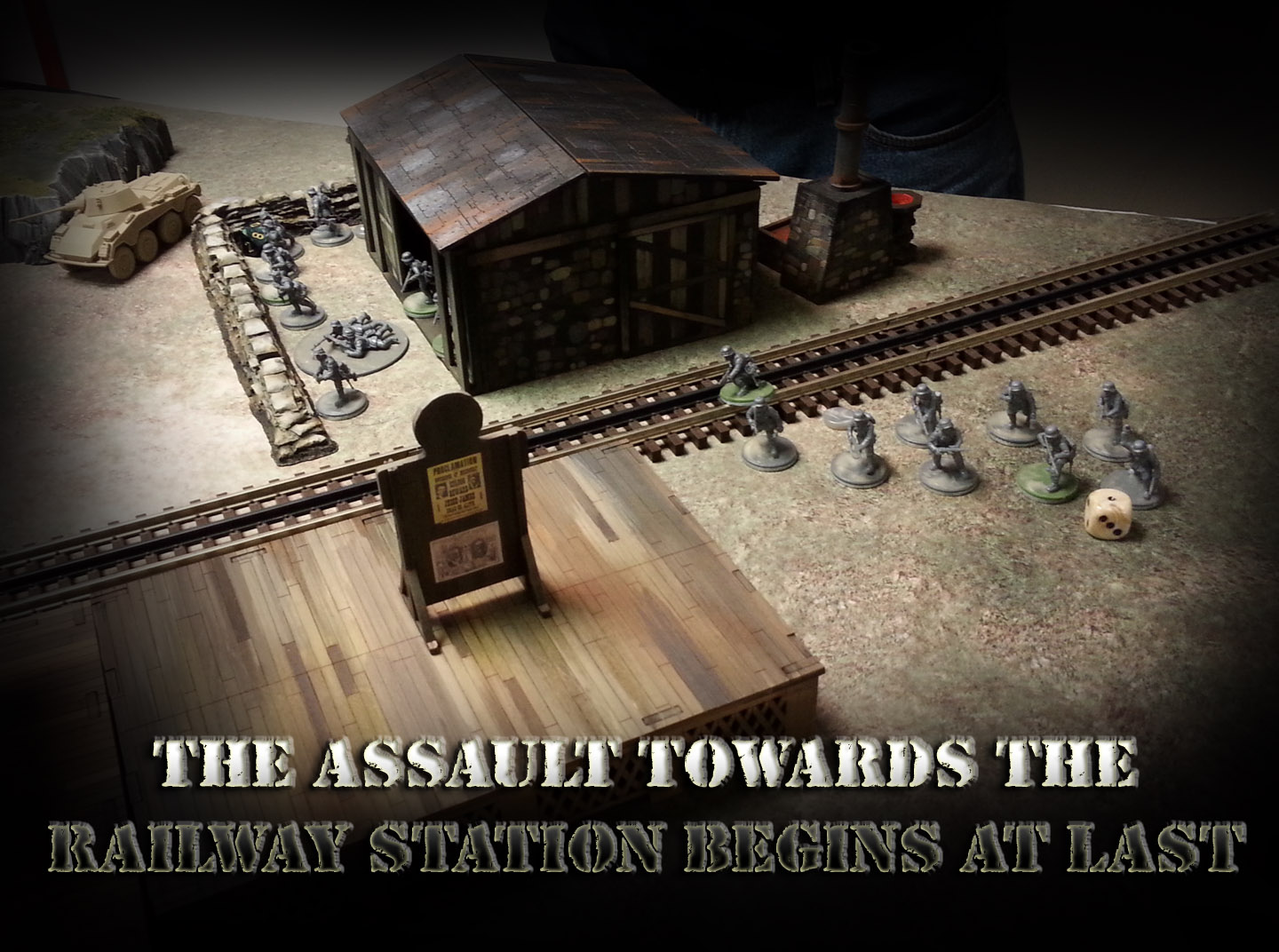 The multi-layered defense was proving to be very nasty.  While Allied forces did take some losses, those were due more to aggressive moves to see what would happen, or not understanding how things worked... like anti tank grenades! :-)

There was no 'staging ground' for the Germans to gather their strength and then move out.  Had there even been one tree line or ridge, that might have been enough to let them come on that first turn and push one flank. 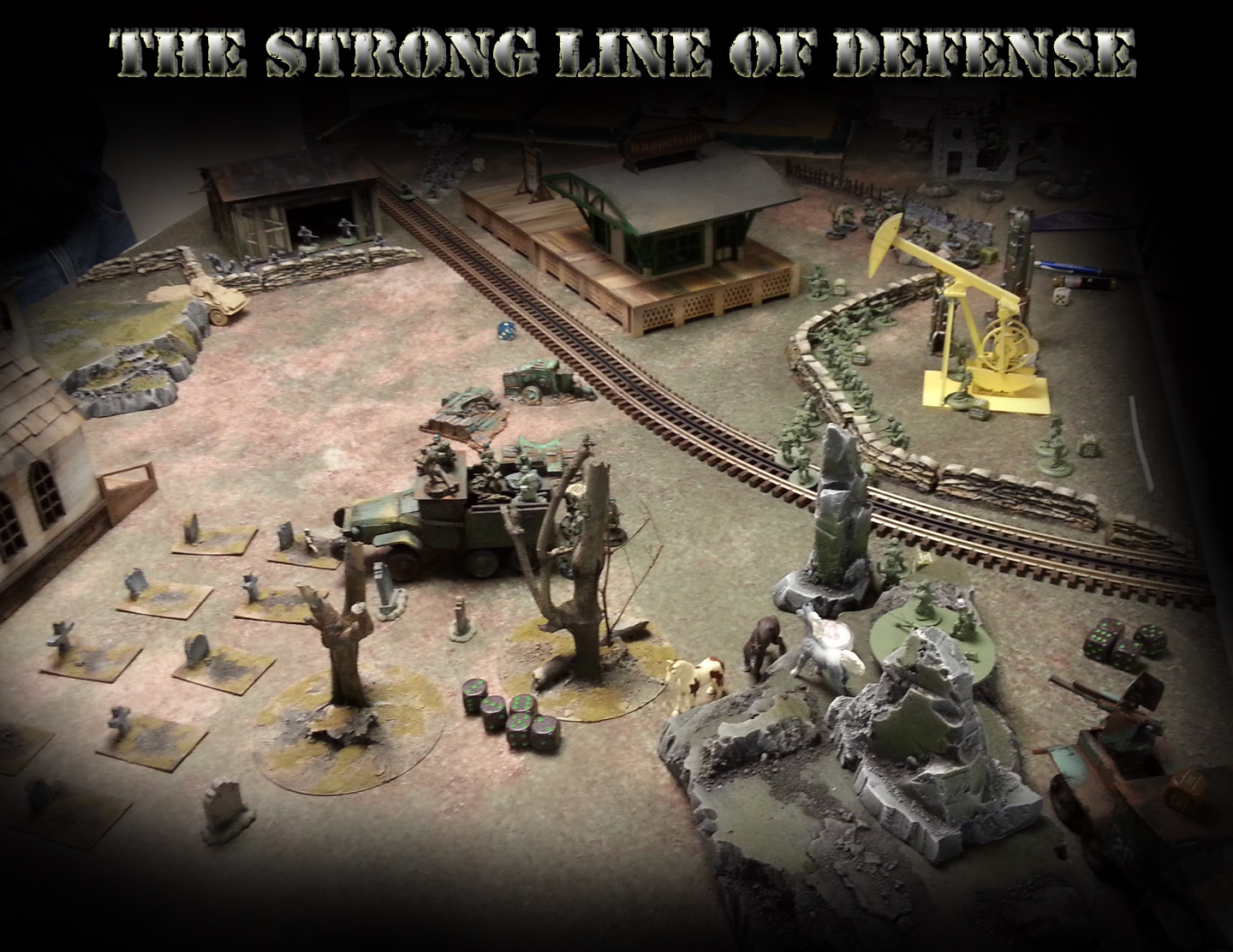 I wanted to move troops around, and not simply hide behind barricades the entire time.  My regular forces that I want to create are supposed to be more mobile, because the last thing I want is to have long distance shooting duels for 3 hours.

I think there was a forward artillery observer in the game too.  It mostly added pins to the Germans, and killed Allied troops when it went haywire and moved a few times.  With the way I roll, I would only have one of those if I knew I would be 30+ inches away from the enemy at all times! :-)

The best thing about this game was the opportunity to see how useful or useless things potentially could be.

I don't think we ever got to see close combat between troops, but we did get a good look at what happens when you are pinned to death! 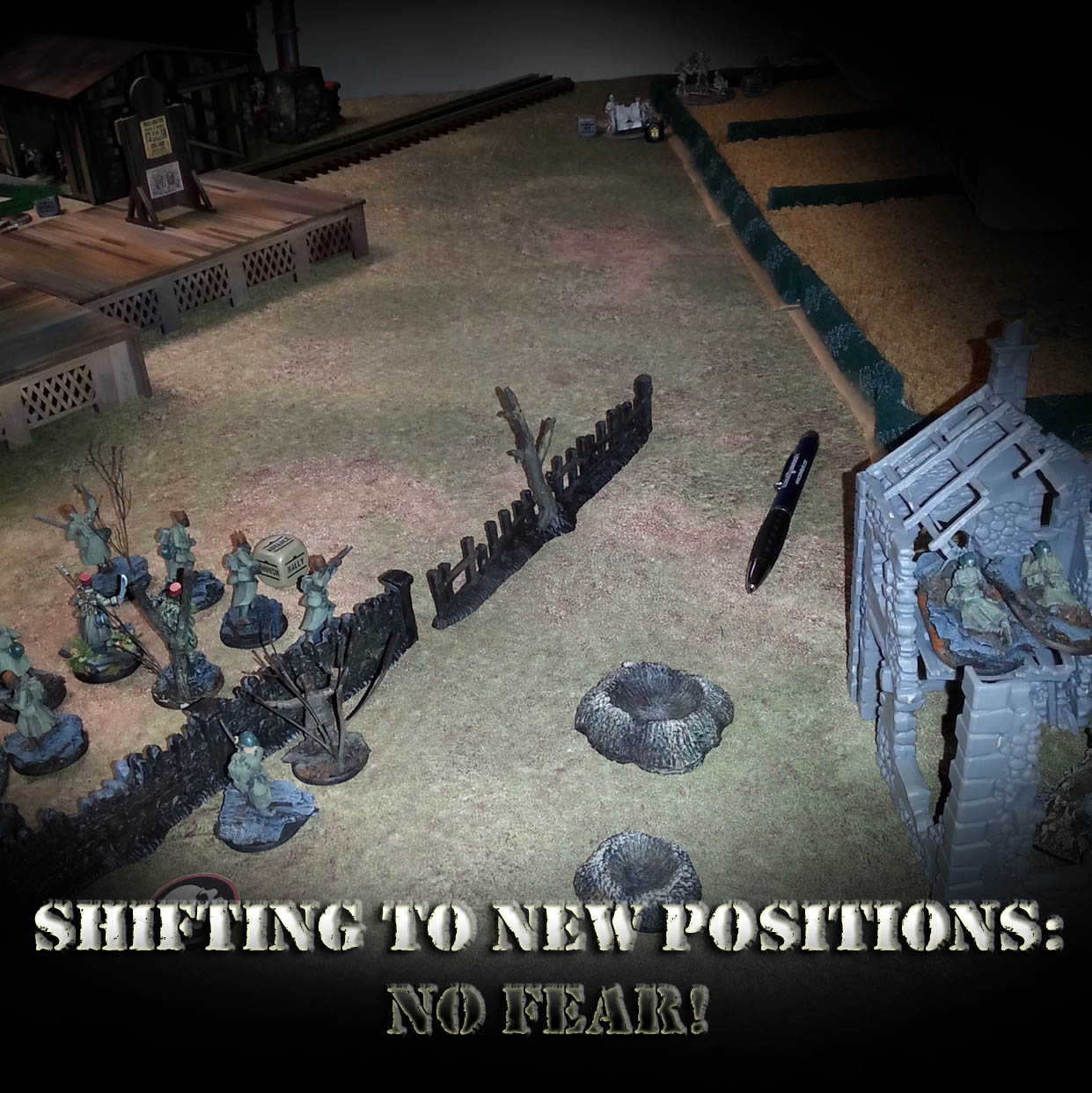 To keep from being too static, both the French and American units advanced.  It was pretty clear that the objectives were in no danger, and it was the best chance to see how anti-tank stuff worked, the disadvantages of being in ambush, and more.

While the advantages to the ambush settings are obvious, the disadvantage was more subtle.  I think I would rather have as many dice in that darn bag as I can have!

We did do a small test a few weeks before this one... between that and all the Tabletop Battle episodes that I watched, I saw that you want a bazillion order dice in that bag. 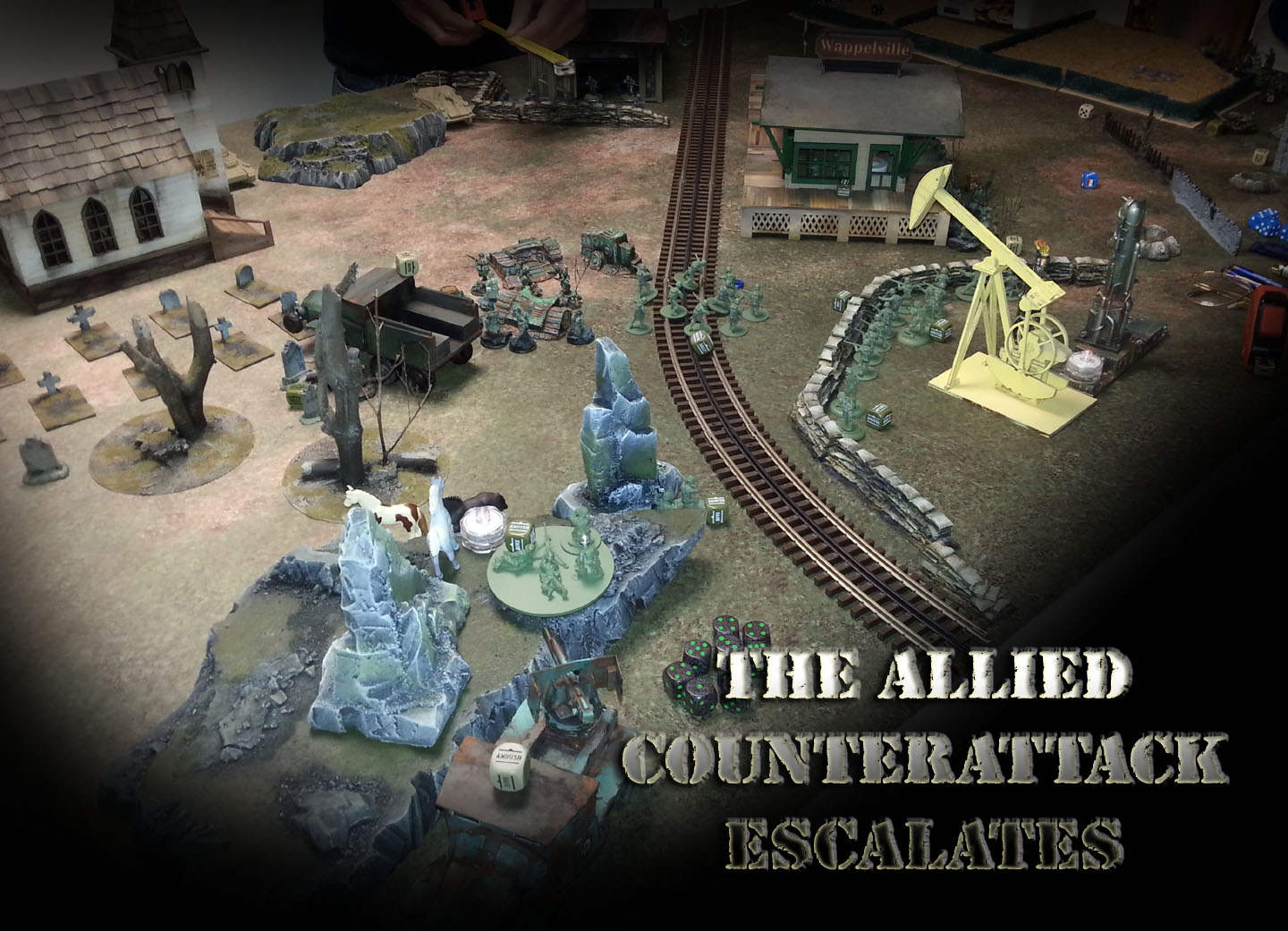 The Puma kept blasting away at the unit which had taken cover behind the ruined tank (also from Secret Weapon), but they had to keep advancing towards the church.  This is where I learned that if I wanted to use the two MMG's on the Laffly, it had to have passengers!

In hindsight, I would have been far better off staying in the transport and shooting those guns.  However, we are all learning... 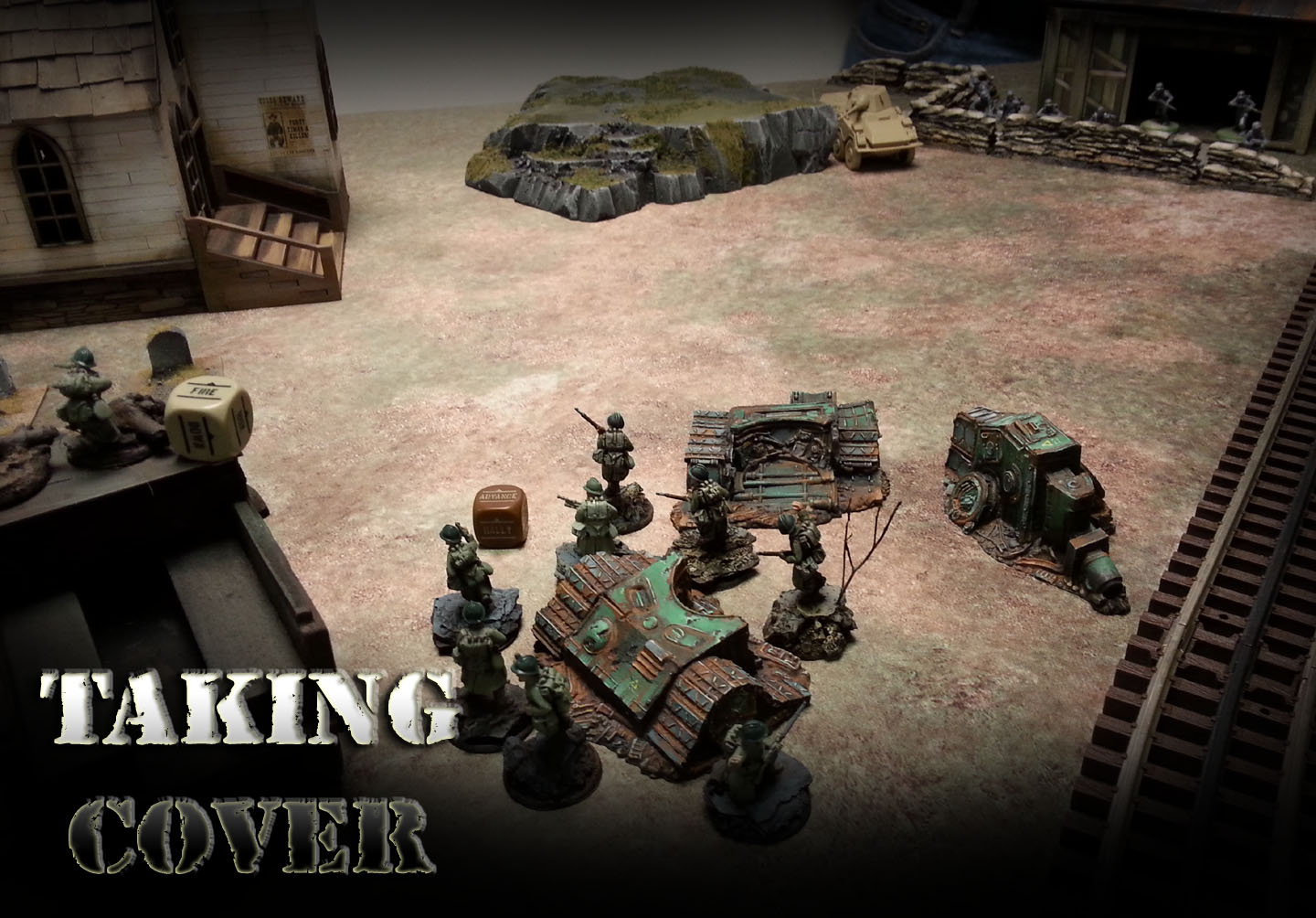 Yes, the tank assault was deadly.  Not for the Panzer, but for me.  I learned that anti tank grenades don't do very much if the vehicle is above 8 armor, and you are not hitting on the sides or rear (confusing it with another game system).  I was also mistaken in thinking that I could at least get a pin on it.

Of course, rolling like garbage for both the attacks and the damage roll did not help, but I probably would have done minor damage anyway.

Something like this has to be a last resort, not a plan!

We ended up calling things after a while, and spent more time analyzing various aspects of what we saw.  The terrain was already being worked on, and you will see that huge difference next time.  I am hoping that we can avoid pinning contests, where you have a ton of useless units sitting there on the board unable to pass morale checks.

I don't know if large or smaller units are the way to go.  While the bigger units won't be reduced to half so easily, taking more damage, they are harder to keep out of harm's way, and could end up being a pricey pinned unit!

From what I have seen, it might be better to go with inexperienced vehicles and save a few points, especially if they have MMG's on them.  They use the morale of the crew anyway.  However, Laffly's are not exactly armored behemoths, and you do have to use their morale to move.

We shall see!  Stay tuned for more action from Bolt Action! 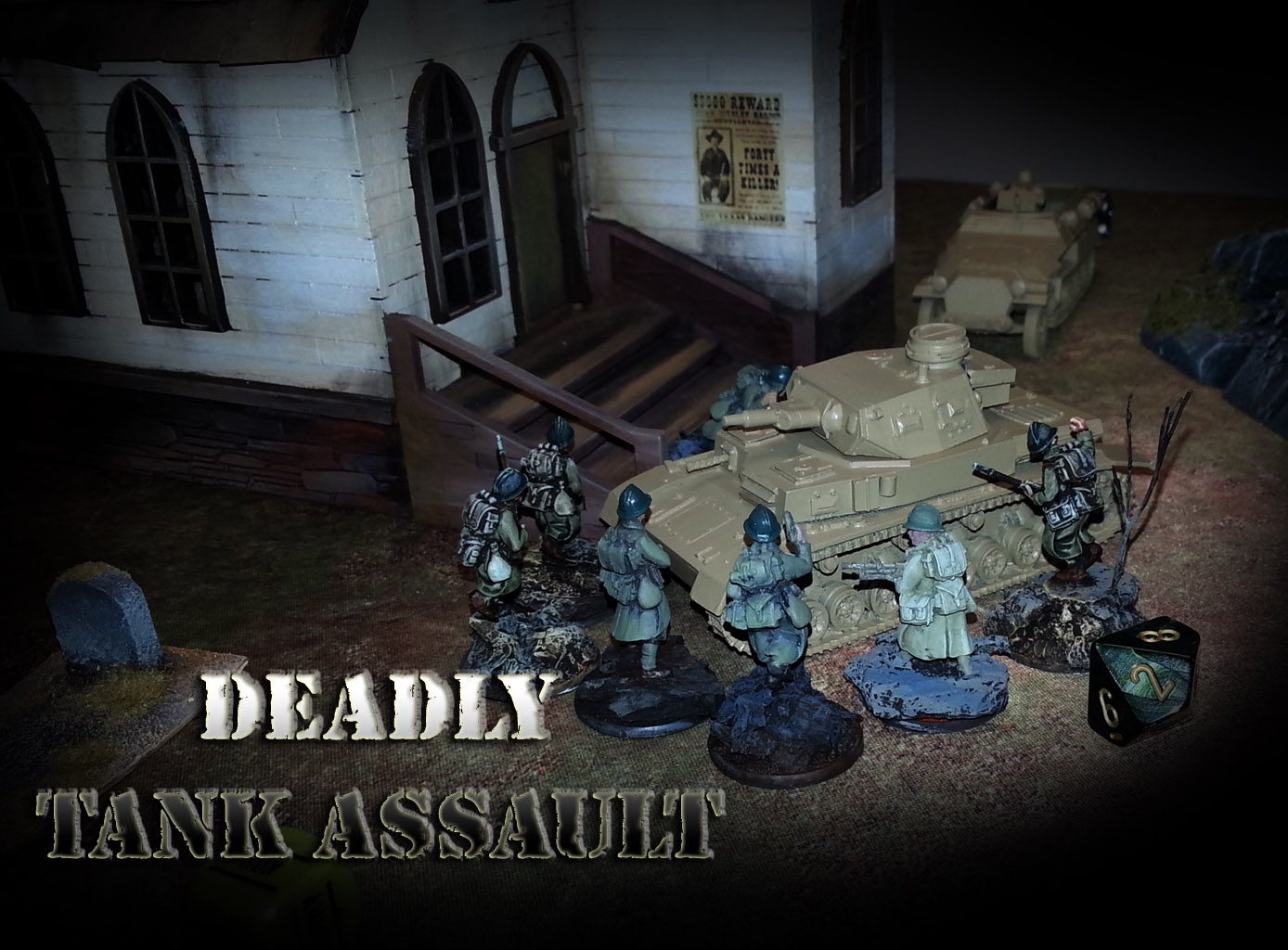 Posted by wappellious at 2:35 PM No comments: 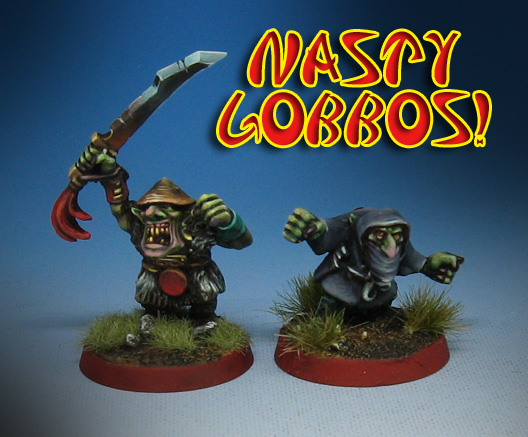 My converted Ninja Goblin needed a fellow goblin as a team mate, so I modified an old plastic Warhammer goblin a bit.  I had to scrape off whatever he already had on and sculpt the hat and fur cloak over the top of it.

I also had to position him on the base so that there would be room for the ball!  Who knows how often he will have to grab that and scamper through a scrum to the end zone!

I decided to leave the sword as is, even though I had considered making some type of katana for him.

Here he is with the Ninja Goblin... 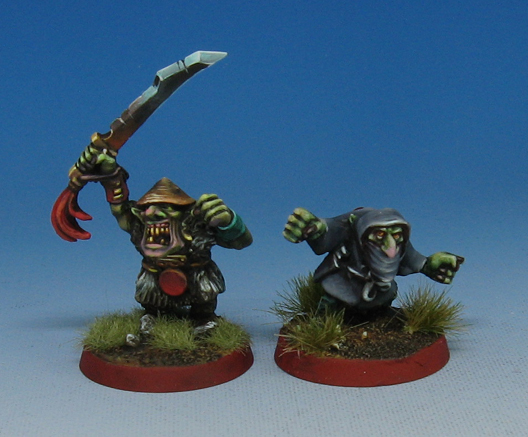 And this picture shows the inspiration for the fir cloak and hat... on the turn marker goblin! 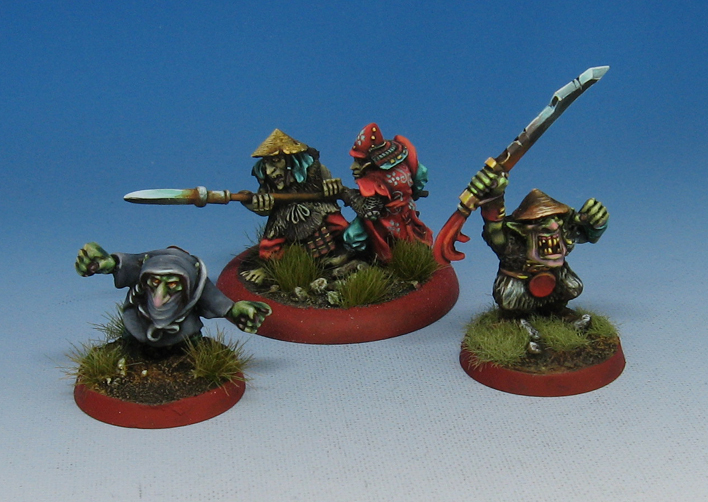