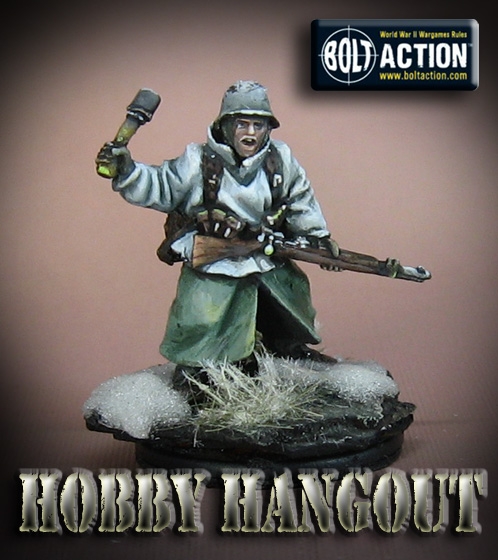 Hey folks!  Later tonight, I will begin hosting the first of the Bolt Action Midnight Madness hangouts... part of the Hobby Hangout series.

They have been expanding the number of game systems that are covered, and now we have a place to paint our Bolt Action minis and rivet count like crazy.  Not everyone can get to a game store to paint with friends, or even have a store set up for such things.  This is a great way for people from all corners of the globe to get together and paint the minis they love with a little company from other painters.

I have several armies that I will be painting, especially with my oil paints.  I'll try to show different basing techniques, and even some terrain pieces as time goes by.  I have a fresh batch of winter German and American troops, and I will enjoy painting them on future hangouts as well!

This snow effect was done using the Secret Weapon Crushed Glass technique.  I really love this technique, because you can create many "types" of snow, from light fluffy 'cold' snow to nearly melted snow.  When combined with weathering powders you can even "muddy" your snow...

This figure was done with acrylics several months ago.  I am really looking forward to trying it again with oil paints!  In tonight's session, I will probably be painting my winter Russians and Bersagleri.

A link will be posted to various groups so that people can join in .  At first there will be a limit of 10 people in the 'room' via Google Hangouts, but if it takes off, there can be much more space!