Lord of the Rings... the last days of the King? 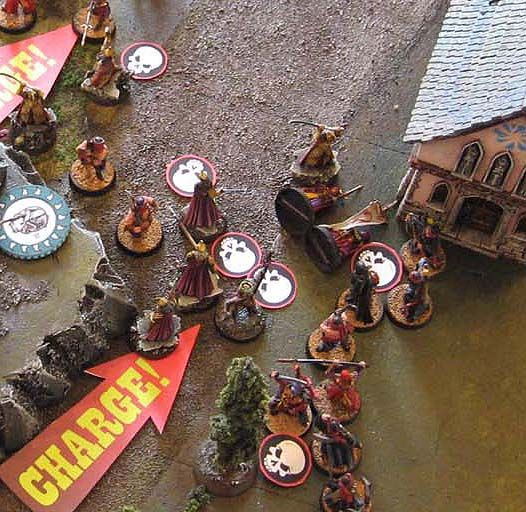 Well, here is that second fight from the other day.  We repeated the High Ground scenario, for obvious reasons.  Rich had a second list prepared, this time one that had mass amounts of infantry.  I was outnumbered by at least 16 minis.  Ouch.

My calculation was that there was not much chance for me to win.  The best I could do was a draw.  If we each killed the same amount of troops, he would still be able to get 10-15 of those extra figures tin position to be touching the hill.

He also had a bunch of the ninja guys, who have lots of attacks, poison, high fight skill, and super high courage on the charge.  I knew those would be nasty for me. 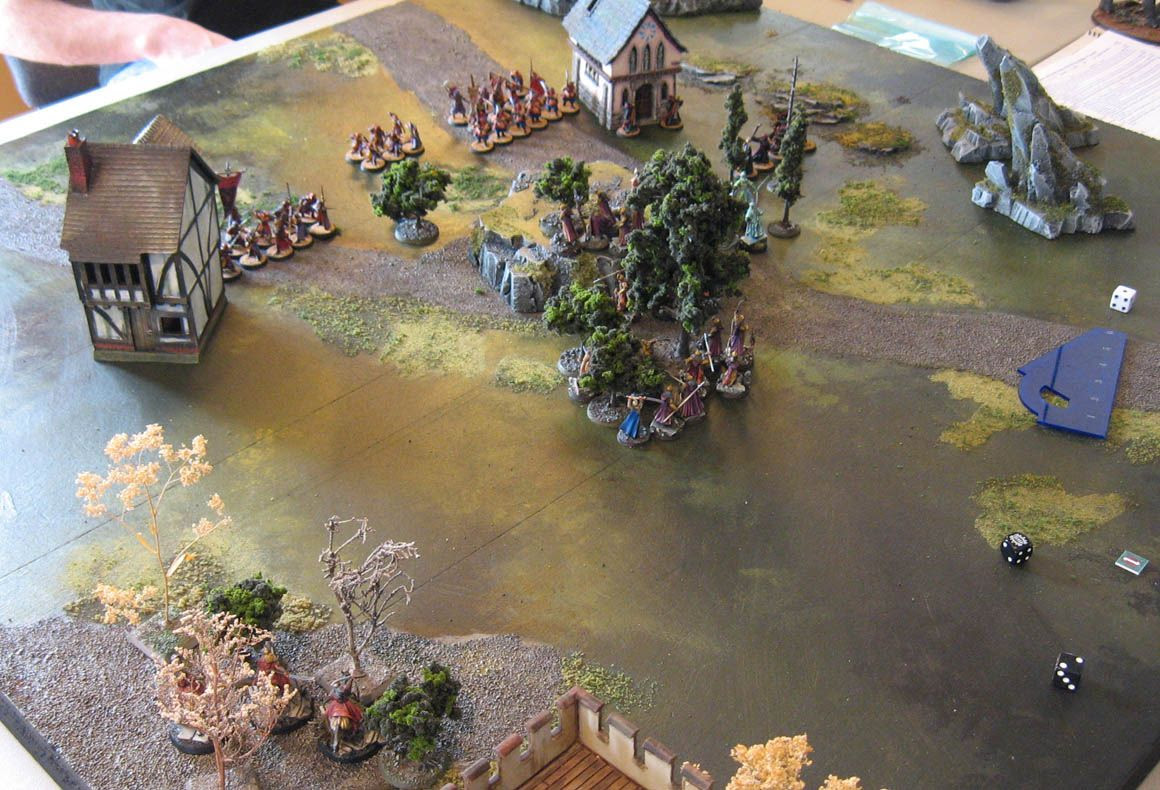 That was the setup and initial deployment.  As you can see, once we rolled a few 3's or less, everything went right next to the hill, or on top of it.  I really don't like this scenario at all.

What was not already up front started moving there the next turn: 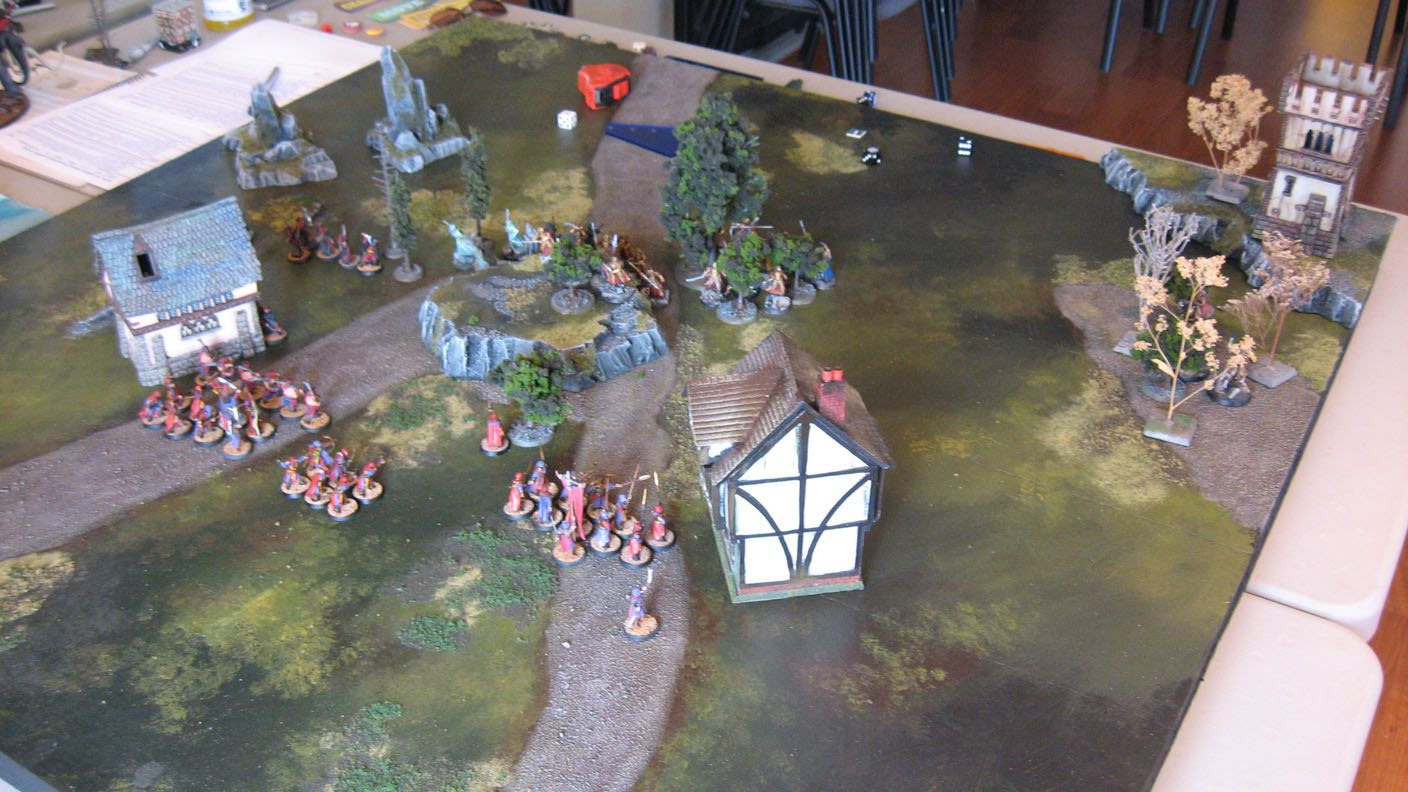 This turn saw the first failure to cast Nature's Wrath by a stormcaller.  That would prove to be fatal.  It allowed the Harad Fat boys to get into position, and left the Army of the Dead (and King) exposed on the right to the ninja guys. 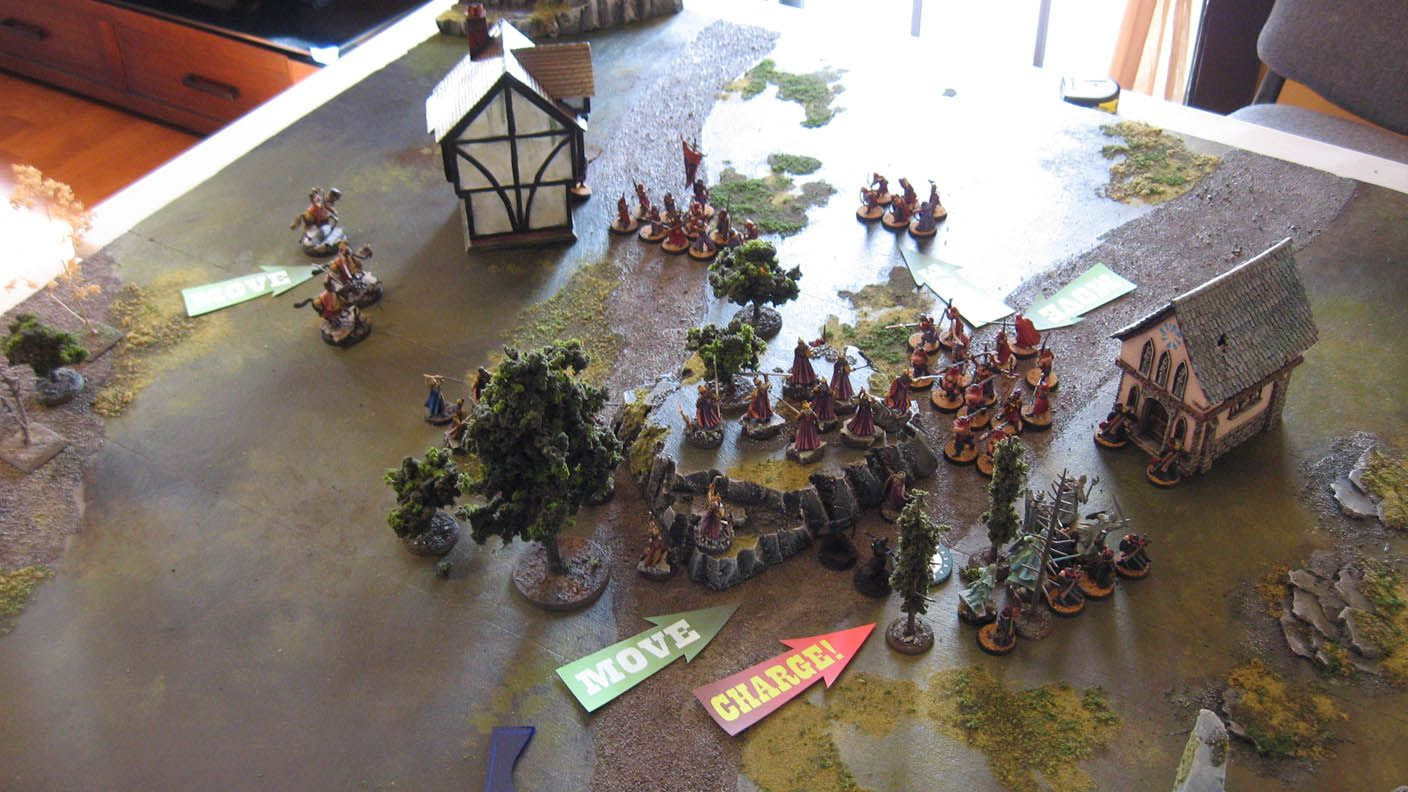 It didn't take long for things to get ugly, and turn into a giant scrum.  Since the King has no might (and the stormcaller had used up his trying to cast, the ninjas kept whacking the AoD, killing them off one by one.  They didn't have to worry about terror, since they have special rules to boost them on the charge (plus a horn!). 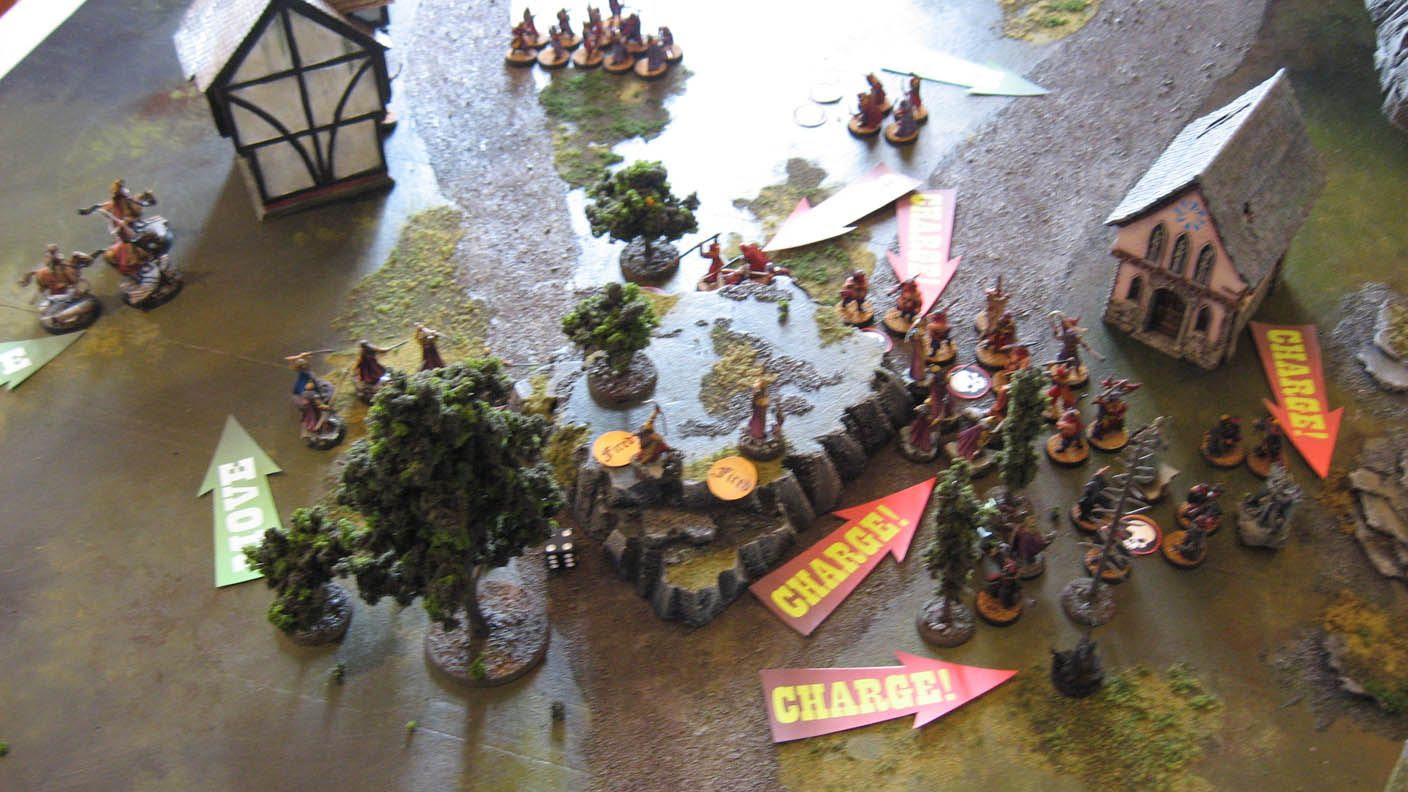 It becomes a grind, as the massed Harad just provide too many attacks that even fight skill 5 cannot compensate for.  With the King dead, a critical 3 victory points would go to Harad.  The second stormcaller managed to cast the Wrath spell a few times, but that only served to delay the inevitable. 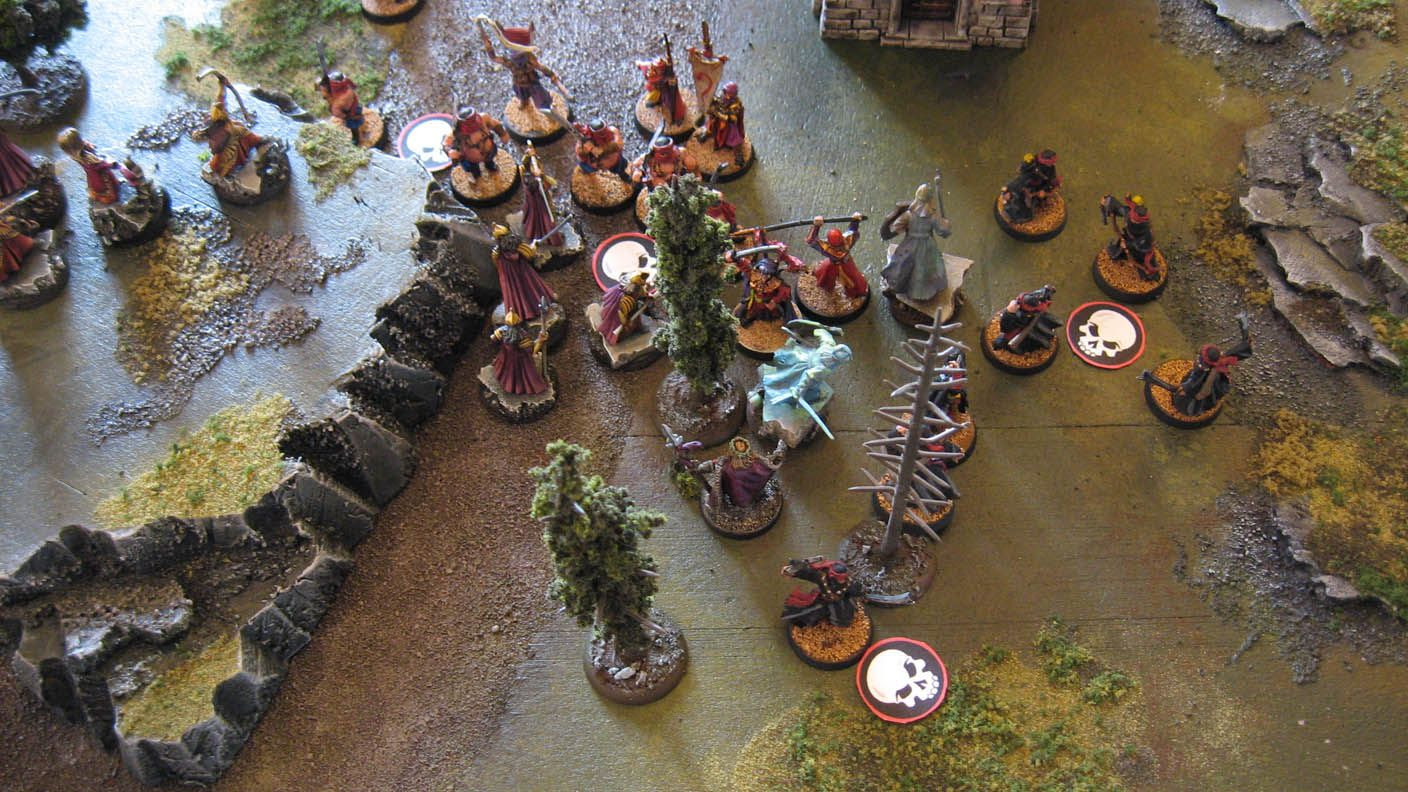 My cavalry was doing some serious damage, surviving multiple attacks, and getting kills.  The game would have been a complete blowout without them.  I had put in minimal cav to match my story line for the 2 armies, but it was becoming clear that this concept was not going to work in games.  The Army of the Dead died way too easily, and they could not keep up with the Elves to get that fight 5 boost.  This was the first turn of the Elves being broken, but I did not roll a 1 or 2, so that game continued.  Had it ended here, I would have gotten a draw, since I had a ton of guys on or touching the hill. 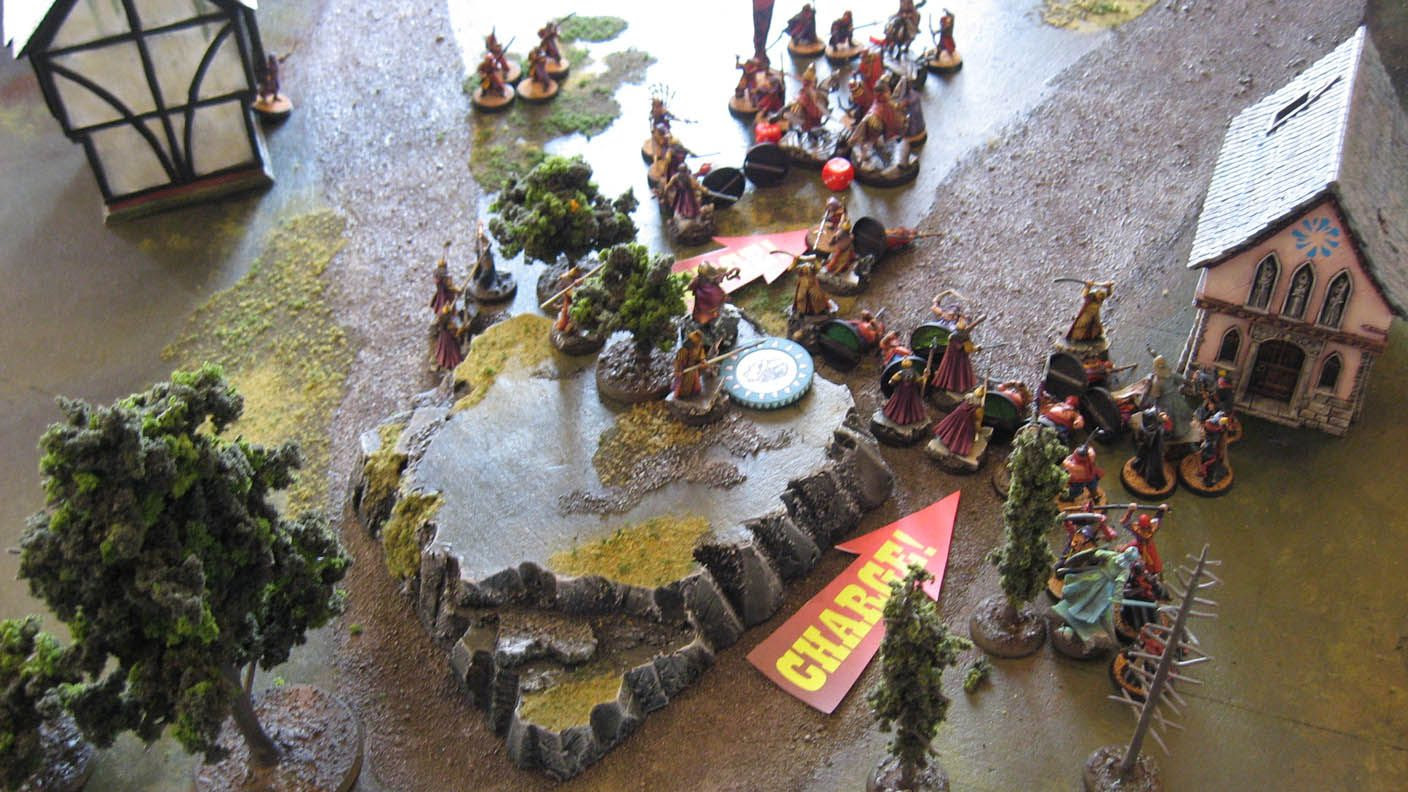 Here you see the end of the battle.  The Elves are broken, but do not run away.  They kill a ton of Harad, but not enough to break them.  The battle does end, but Rich gets 3 guys to touch the hill.  He ends up winning by 3 points... the points awarded for killing the King of the Dead.  That is the second game where his death cost me a loss.  With no might and only 1 attack, he just does not stand up to much.  We are still trying to figure out why he has 6 will points. 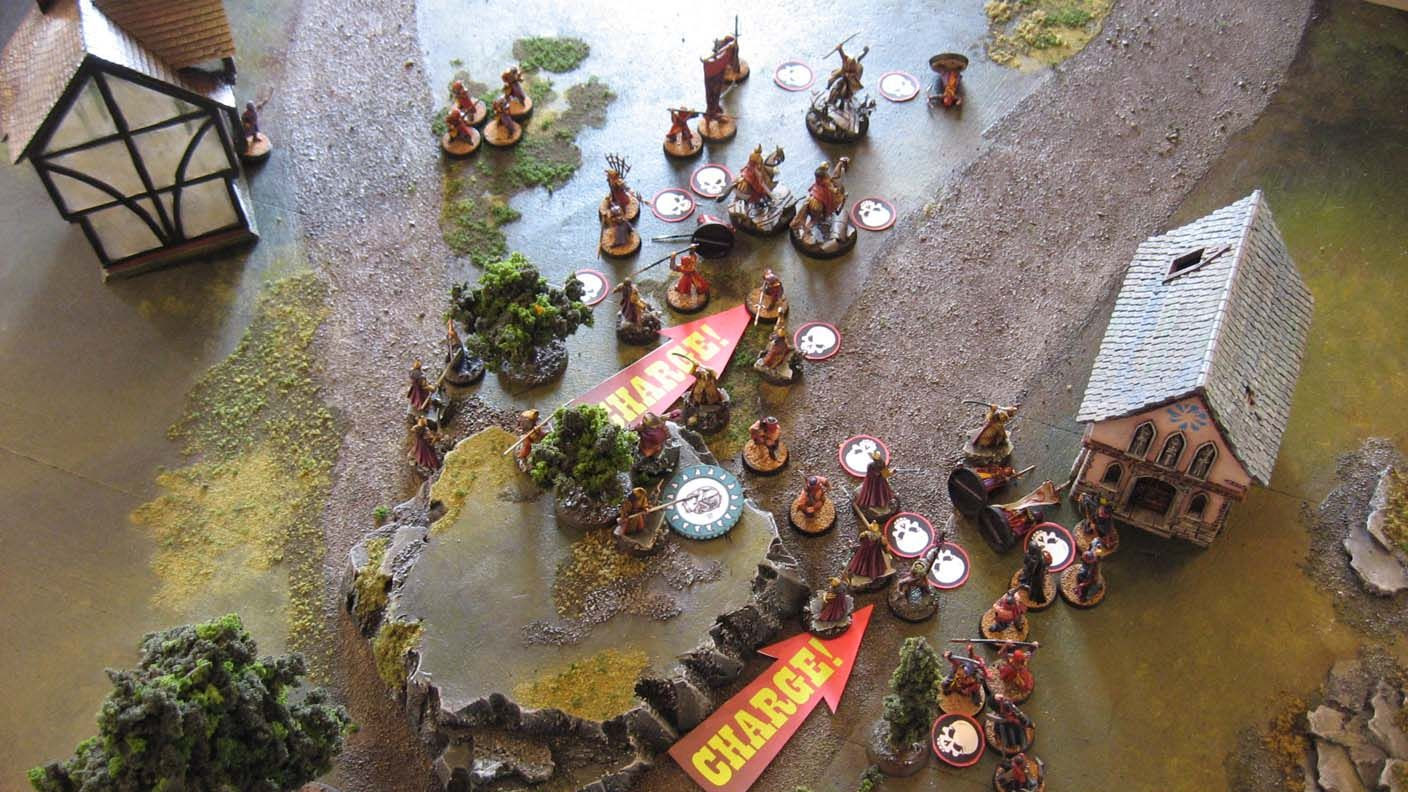 Since they just don't do what I thought they could, we decided that it was time to dump the Dead.  I had wanted to keep them, since they are so much fun to paint!  I was looking forward to having a whole force of these guys painted in the fluorescent paints, but it is just not to be.

As we discussed this, Babo made a new friend:

We went back and forth on what should take the place of the AoD.  The same amount of points would get me a 3rd stormcaller unit exactly, but I don't have those minis, and no time to paint them.  There were some characters that were interesting, but would not fit the fluff.

So, we came up with the named eagle.  I have a perfect story idea for it, and it should compliment the cavalry very well.  With the extra points, I got one more Galadrhim knight with a crucial banner!  There is one scenario that you give up 2 VP's if you do not have a banner.  We will test this out next week.

Afterwards, I painted some more figures, doing my shaded basecoat.. 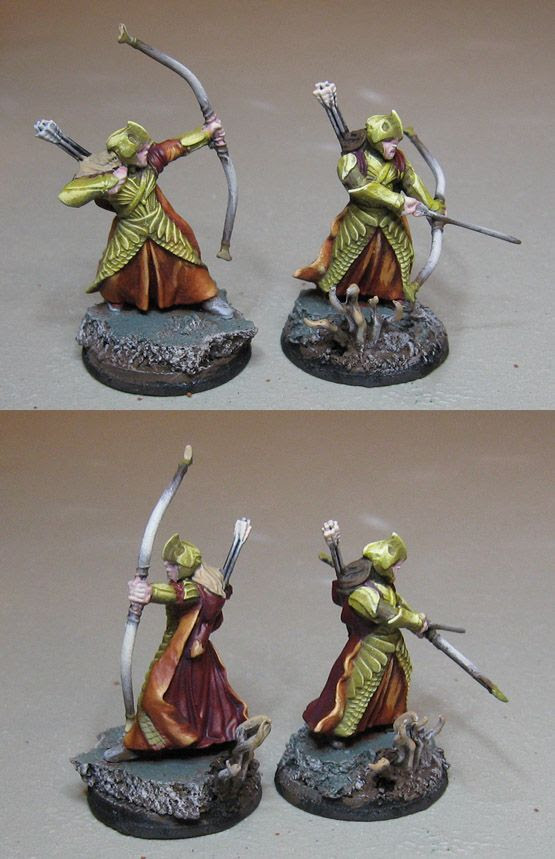 While people played Malifaux on the new terrain board for the first time!!! 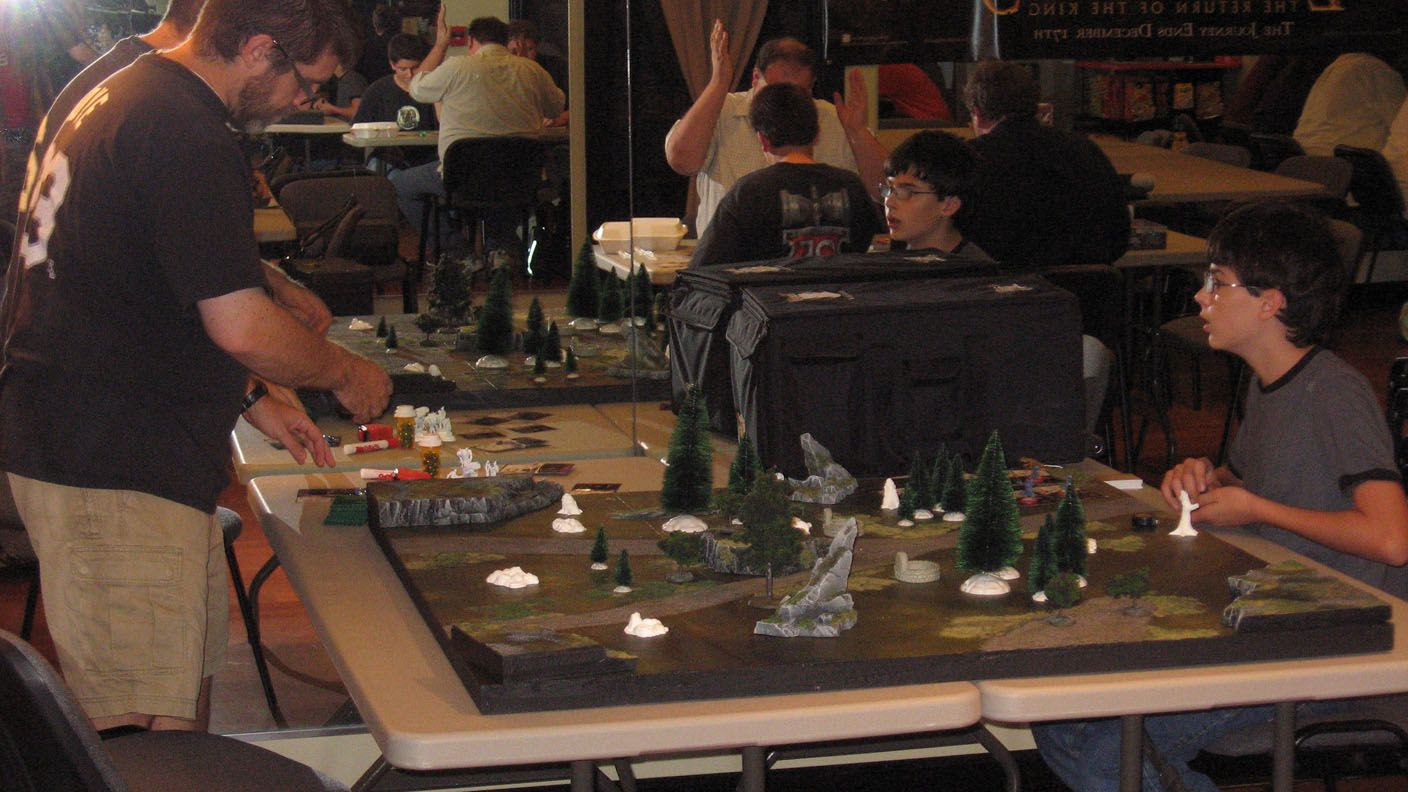