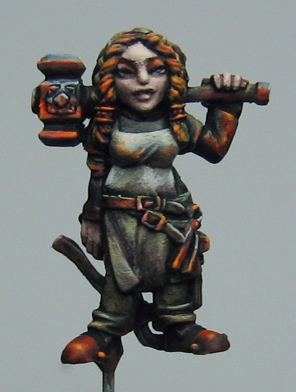 As promised, here are some step by step shots of Elinda Hammerforge from Stonehaven miniatures.  This was one of numerous dwarf role playing style figures they created for their recent kickstarter!

You have already seen the base, so now it is time to check out the miniature.
Using the normal shaded basecoat technique, I went to my lightest shades as quickly as possible.

In this image, you see all the lightest shades set up , waiting for those glazes!! 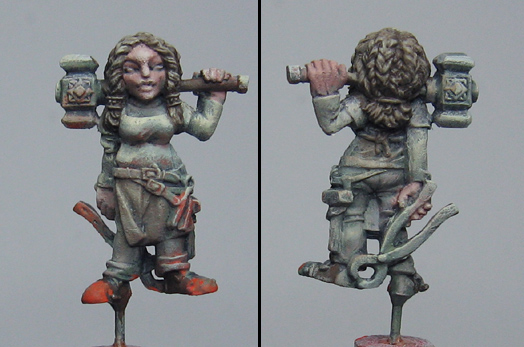 Some quick glazes in place.  As I shade areas darker, I try to tint them various colors. For instance, I use a blue/black on the metal surfaces, a yellow brown on the clothes. and then some reddish washes and glazes elsewhere. 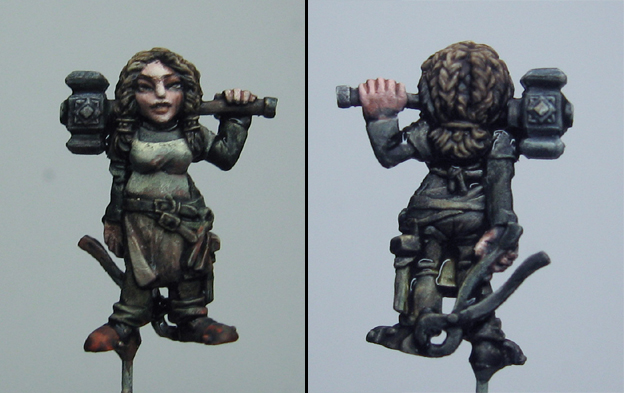 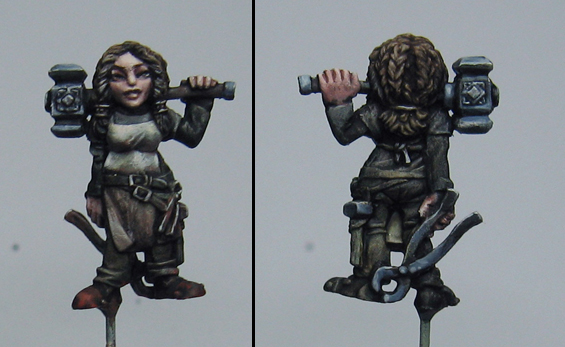 After working back into my middle tones, I did some reflected lights from the forge onto the metal surfaces.  It will all make sense when you see her on the finished base!  Stay tuned :-) 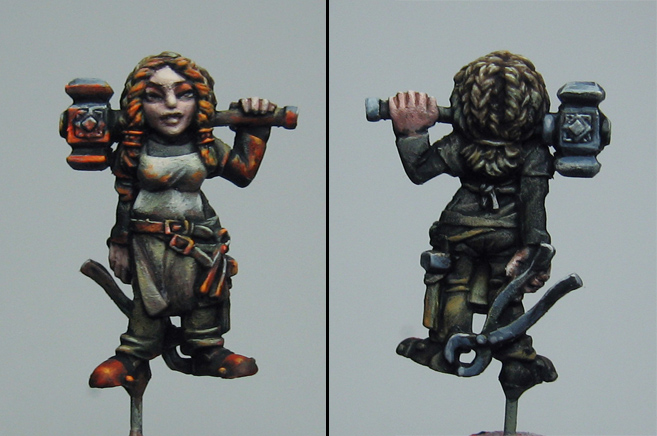 Posted by wappellious at 8:08 PM 2 comments: 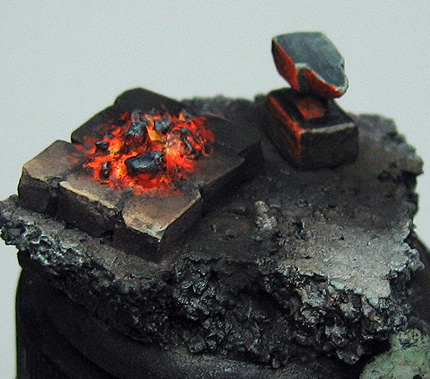 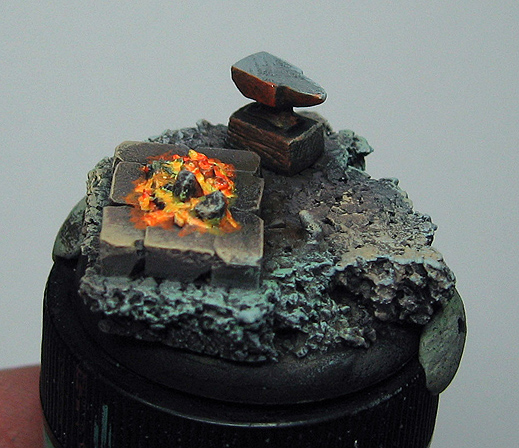 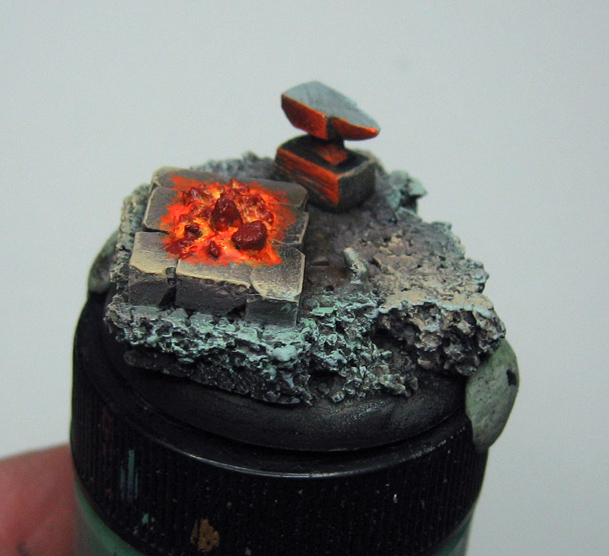 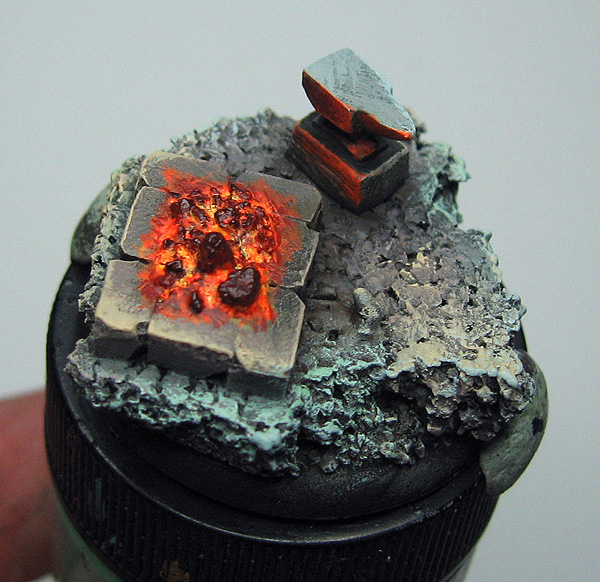 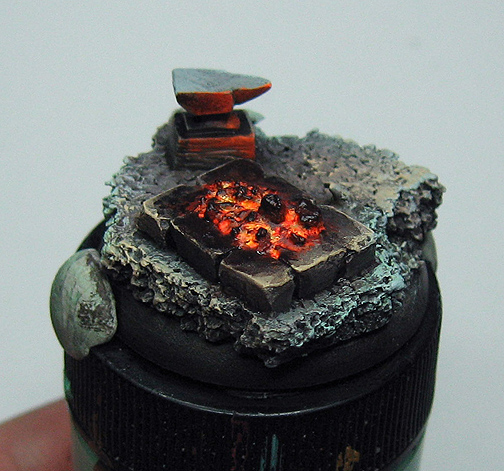 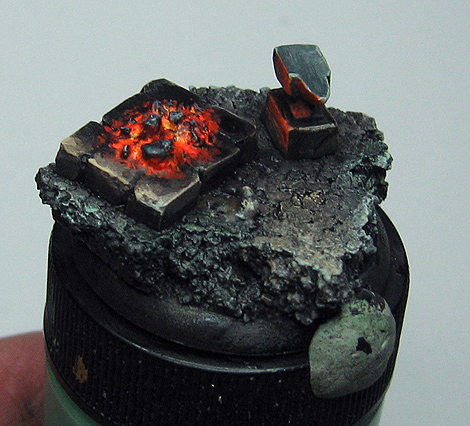 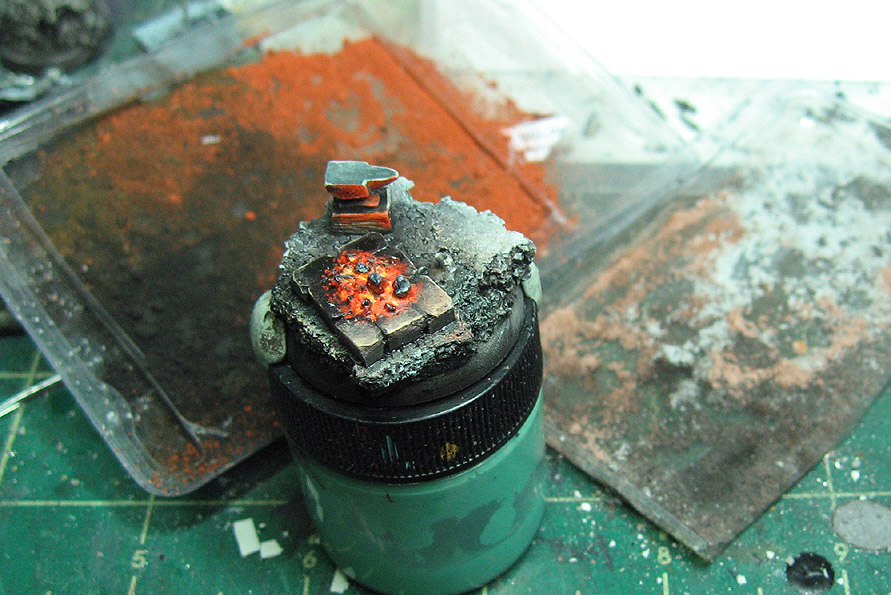 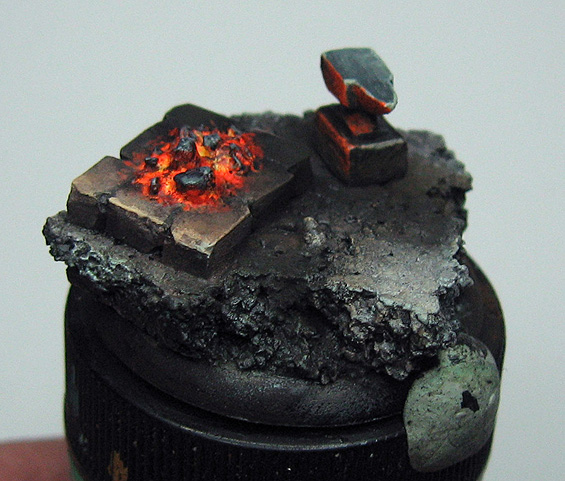 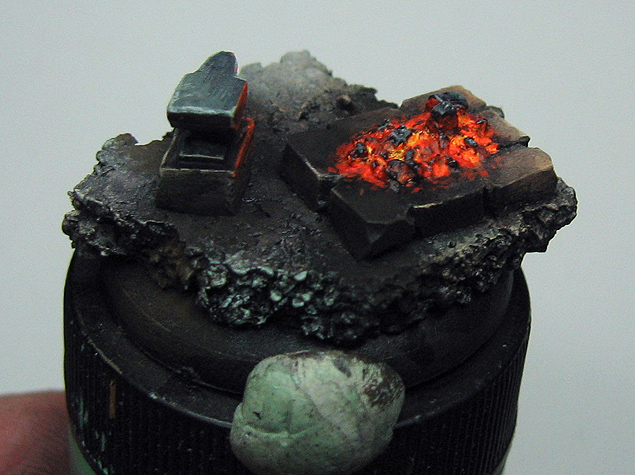 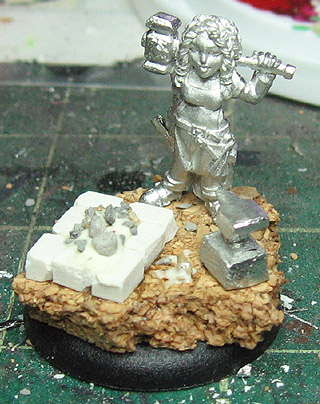 This is the first of the Stonehaven kickstarter miniatures that I will be working on.  She is Elinda Hammerforge.

Since these dwarf figures are supposed to be more character than random miniatures, I want to make bases that really fit the theme or story behind them. 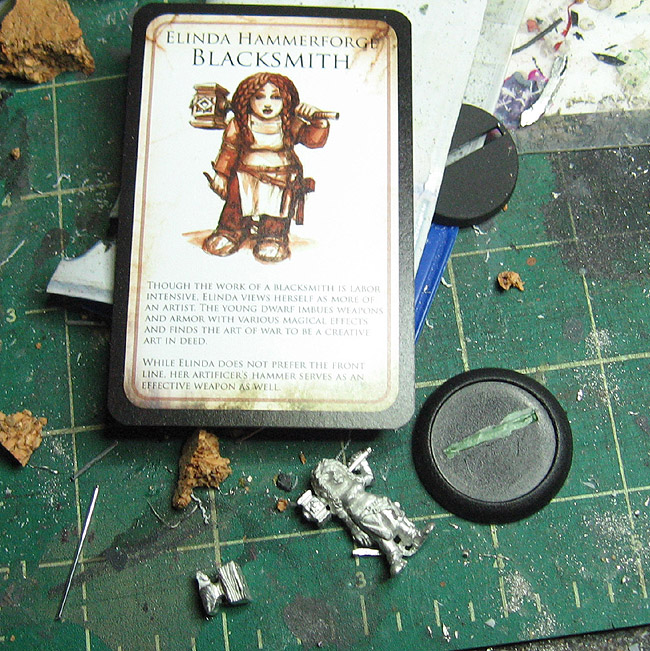 So, it was off to the internet to see some images of blacksmith's forges.  The challenge would be to find something that would not only fit on the base, but not overwhelm the figure! I decided on a simple brick forge... one that might also let me get some glowing light on the miniature.

I started by cutting a scrap of baked sculpey into rectangles... 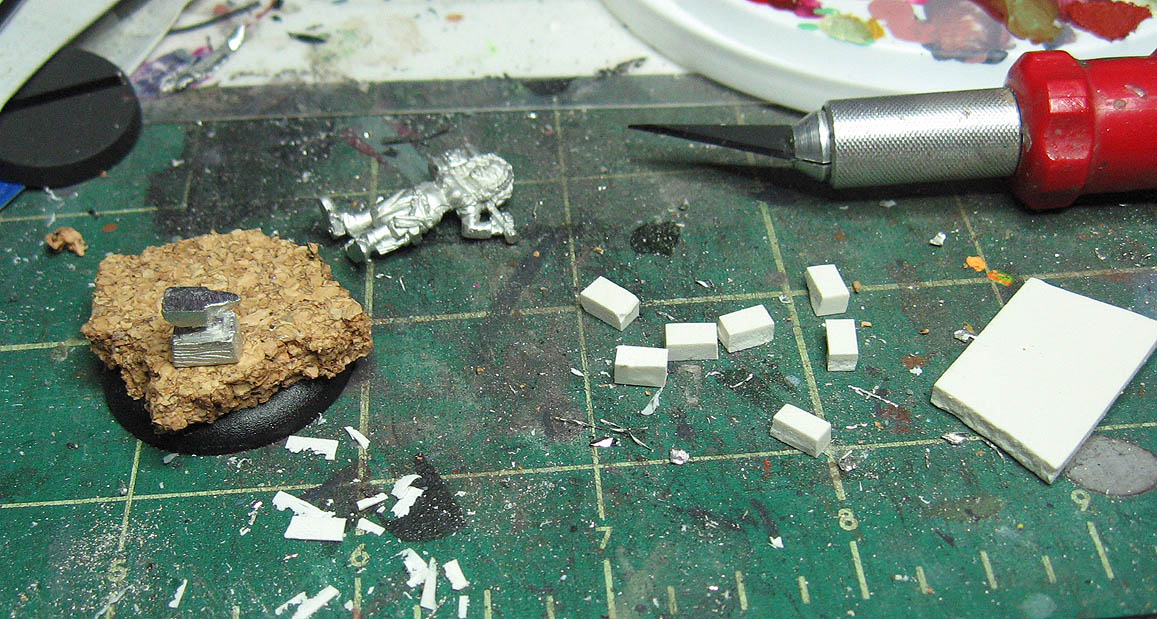 The rectangles were weathered, and then put in place. 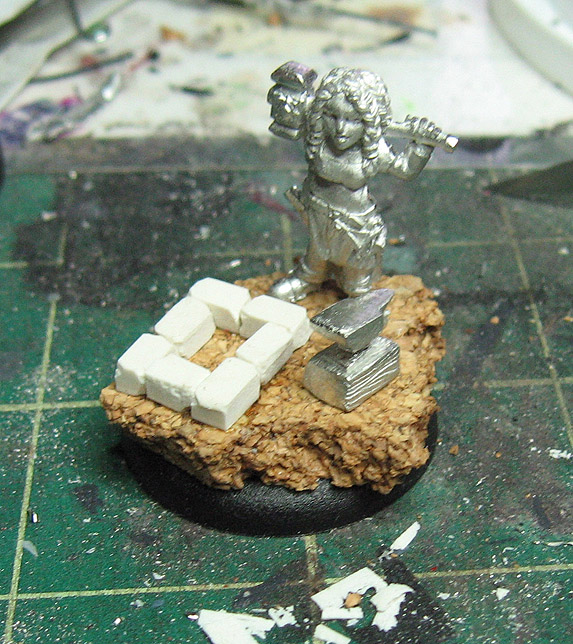 I glued in some rocks and gravel to create the coals... 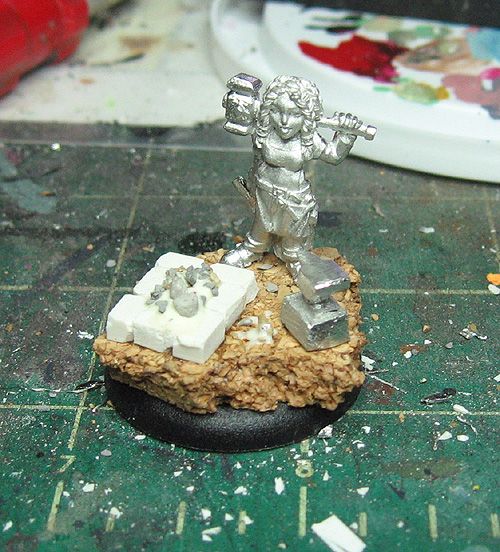 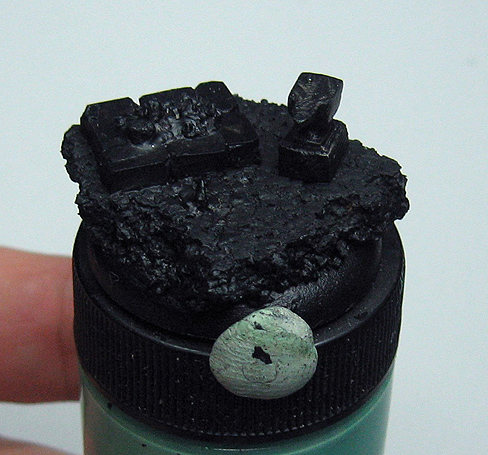 My first layers were designed to establish those warm and cool areas that you hear me mention so often! 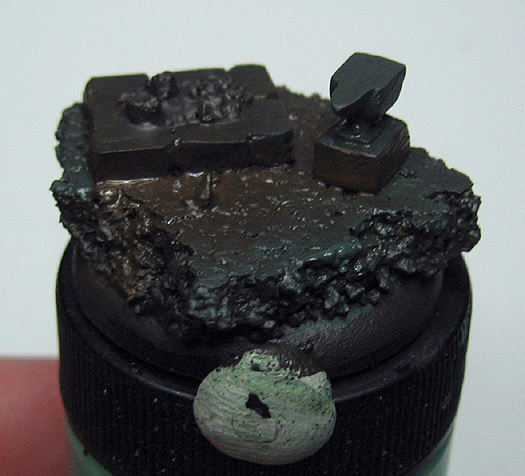 As I work lighter, I introduce some new colors.  For instance, some tan was placed onto the bricks.  I did this in order to set up the very dark soot that would be added much later. 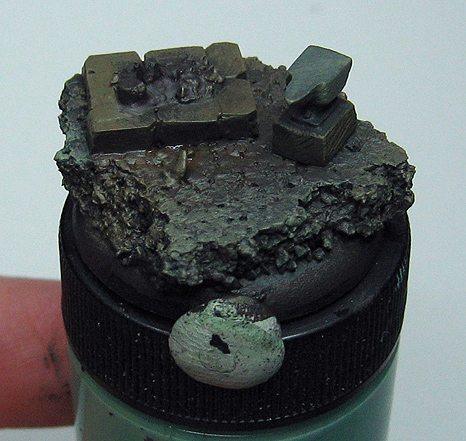 Cooler greys are used to lighten a majority of the surfaces. 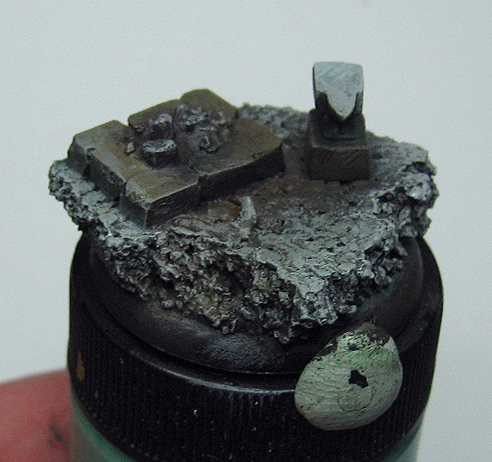 I continue to lighten all areas, knowing that later I will be adding lots of soot and ash. 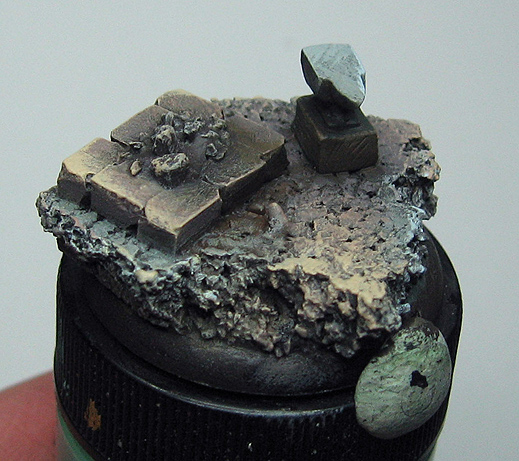 The conclusion of the Forge base will be posted tomorrow!  Stay tuned!


Posted by wappellious at 4:06 AM No comments: