Hangin' out in the jungle... skink style Next up, chameleon skinks!

These fun little guys were among the last things I painted for the army.  As you can see, lots of different colors went into them!

Each skink was painted a different color... just for the heck of it.

There was also one conversion of a regular skink to fill out the second unit...

Here's something on the movement trays (there are three articles in all):

A few of my objective markers in this image... 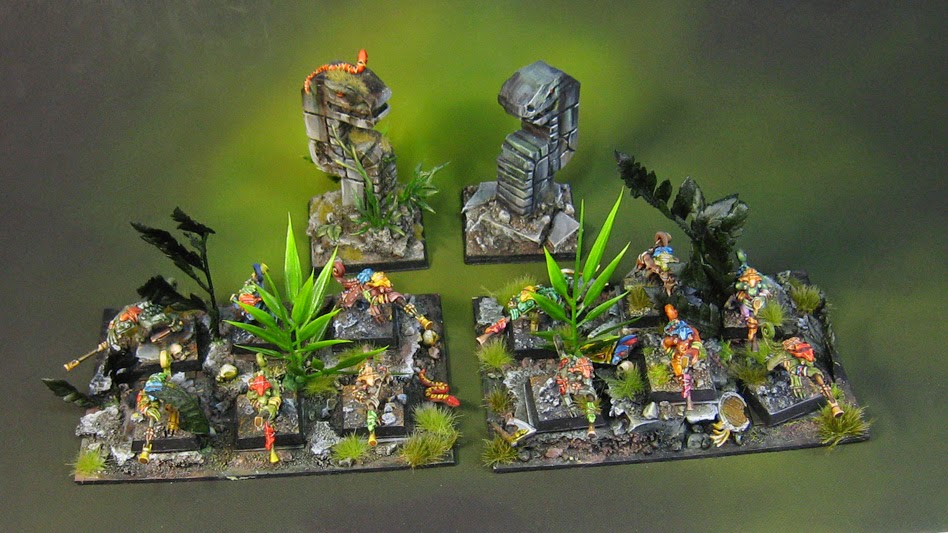 The magnets revealed!  Be sure to check out all three phases of the movement trays!  Plus this on for the terradon units. 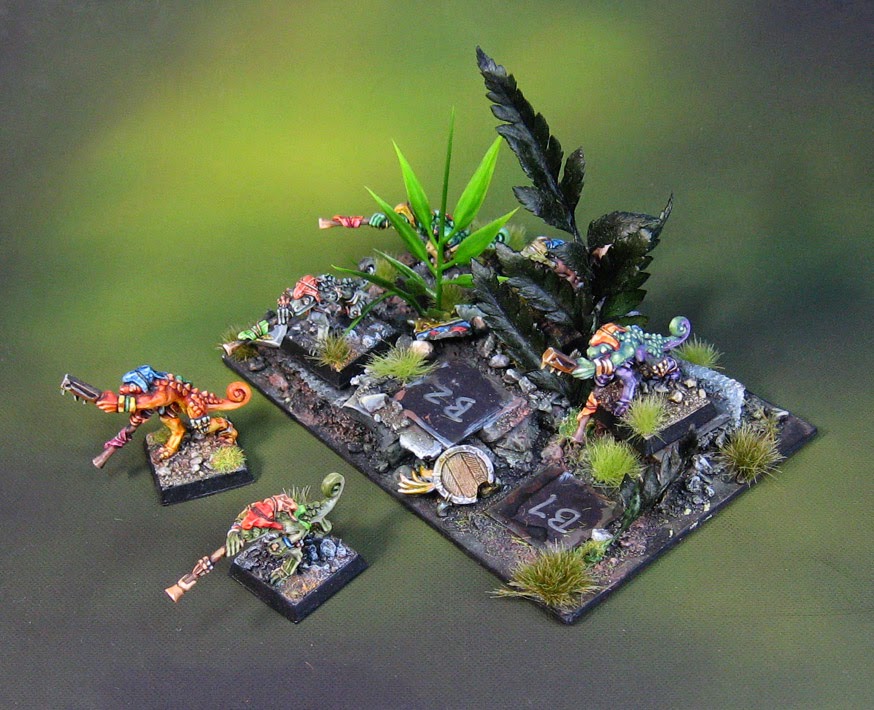 Posted by wappellious at 4:19 PM 2 comments: 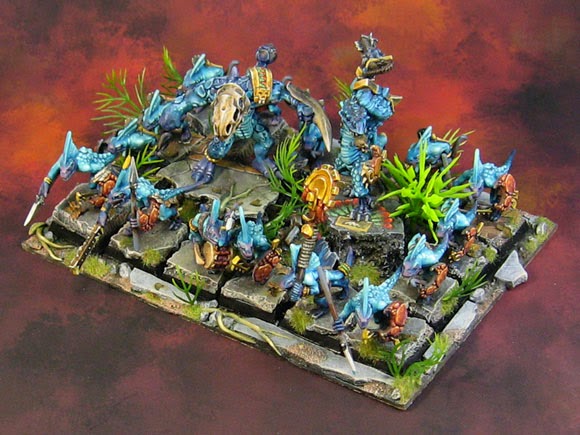 I used to love these units in my original armies.  They were my "foot cavalry", moving at high rates, hitting hard with the proper buffs, little surprises thrown in, shooting lots of poison, and so on. 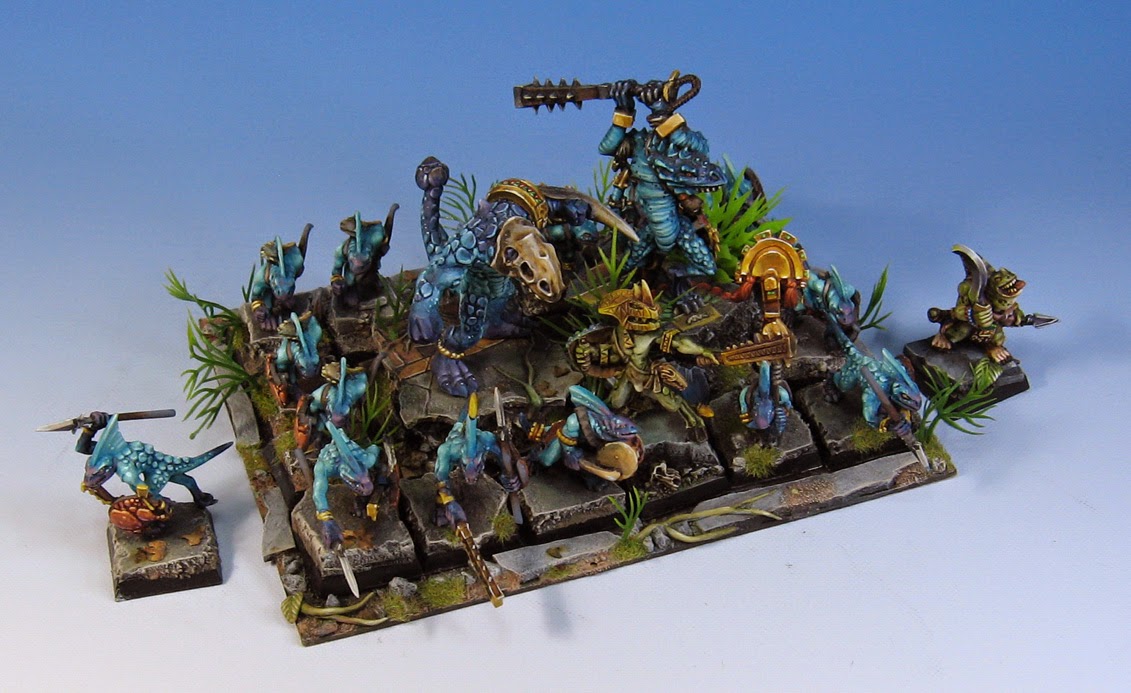 I have been very dismayed at all the subsequent changes between the new army books and the dreaded FAQ's, which seem bound and determined to make these as useless as possible.

First an foremost, they were a joy to paint, since the relatively untextured skin of these little guys was like a blank canvas! 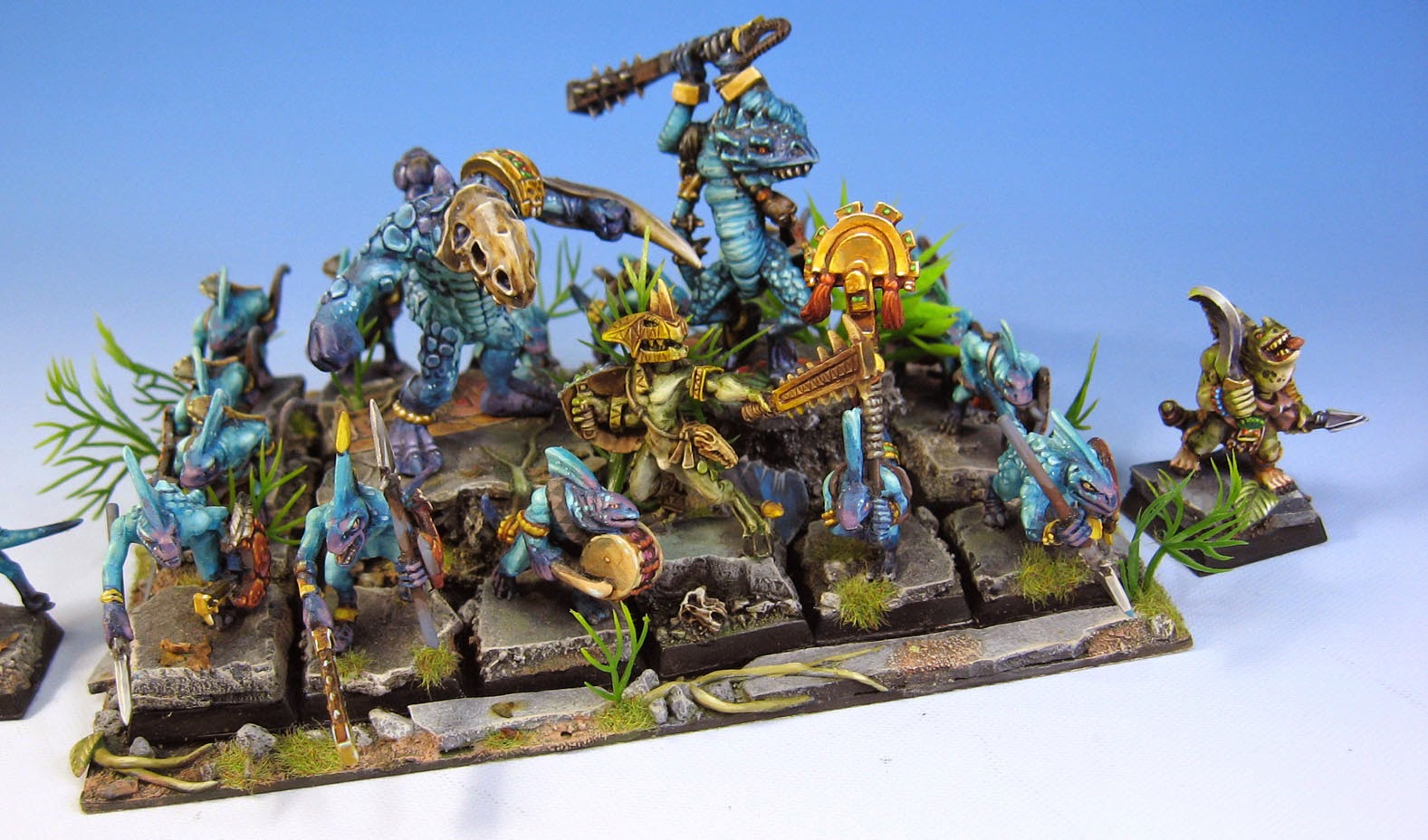 You give this many blank canvases to a maniac like me... and one never knows what might happen! 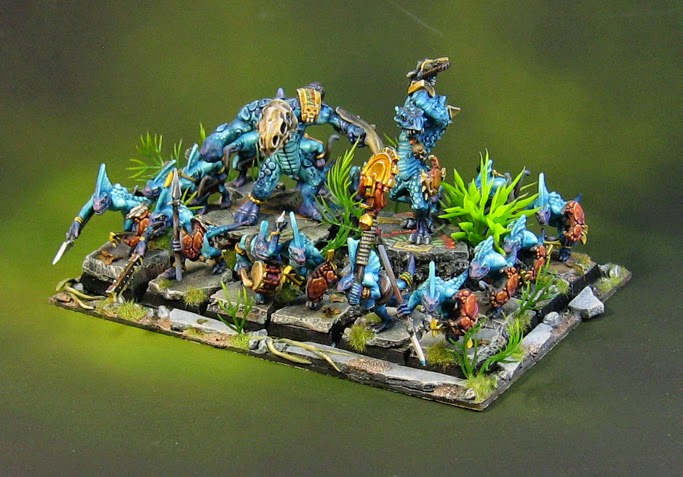 I loved trying out different color schemes for each unit.  That was very fun, but it also helped for game play.  The opponent would not see me eyeing one of my units, or rummaging through my army list to see who had what.  I knew just by looking at the color of the skinks, or the chief inside... even the priest, what they could do. 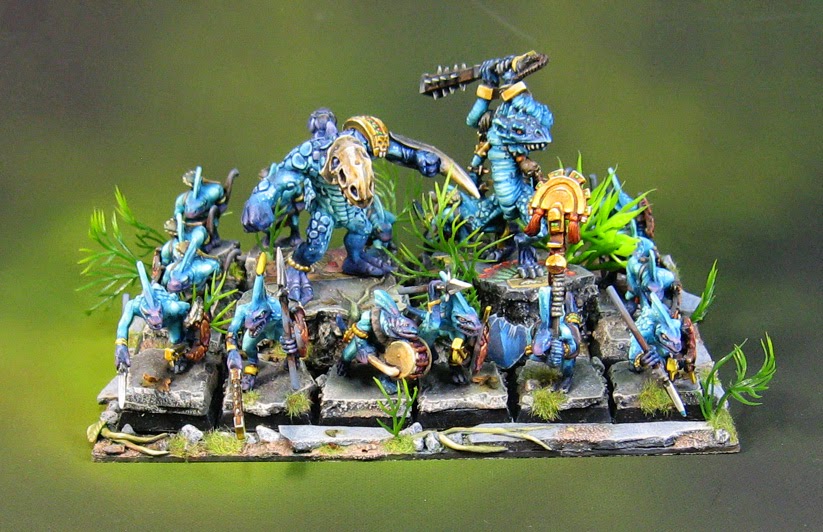 There were four different colored units of this size.  It was a wonderfully compact and maneuverable unit that had fear, higher leadership, full command, fast, shooting, ranks, and even some high strength attacks. 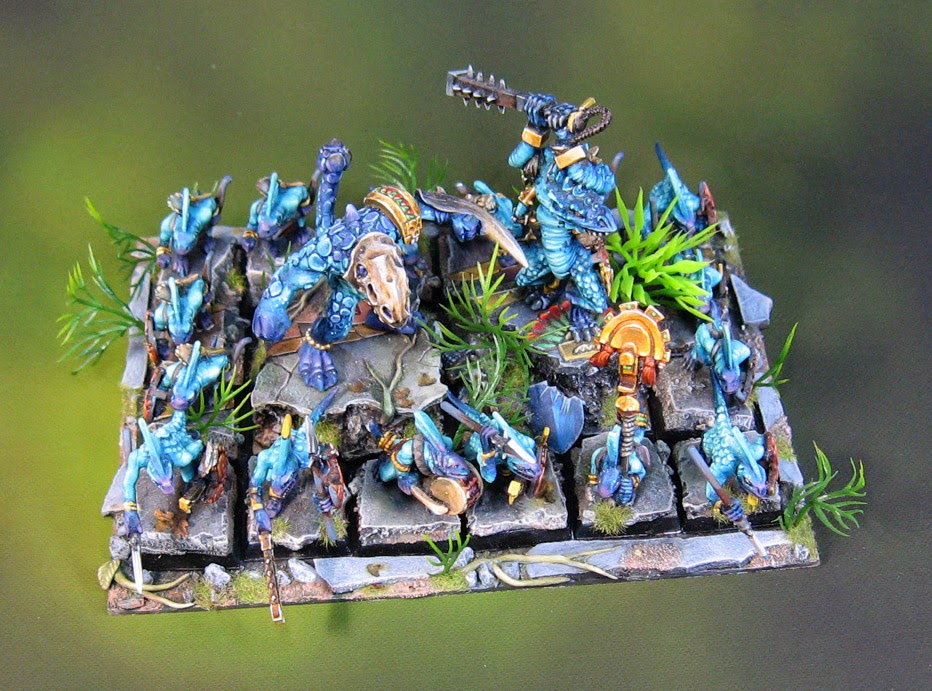 They could easily go into buildings and terrain, and support each other. 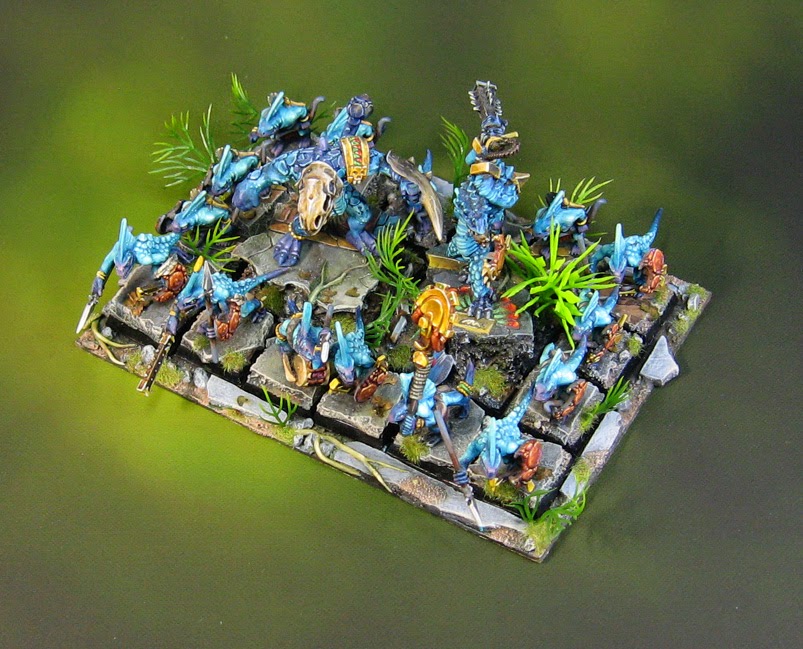 They were also light on points, and were basic troops! 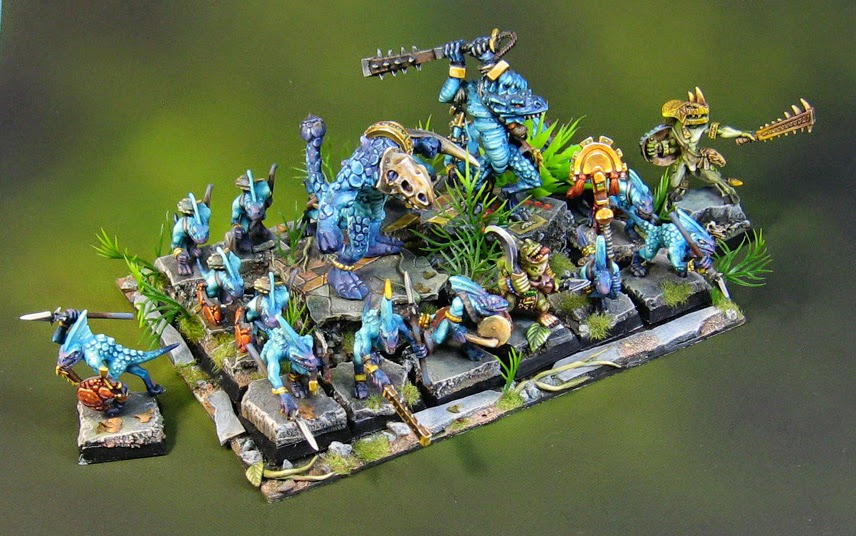 I had at least 2-3 of these in 'average' game sizes.  For the bigger games, I would bring out the "Skink Tank" which I showed a few weeks ago. 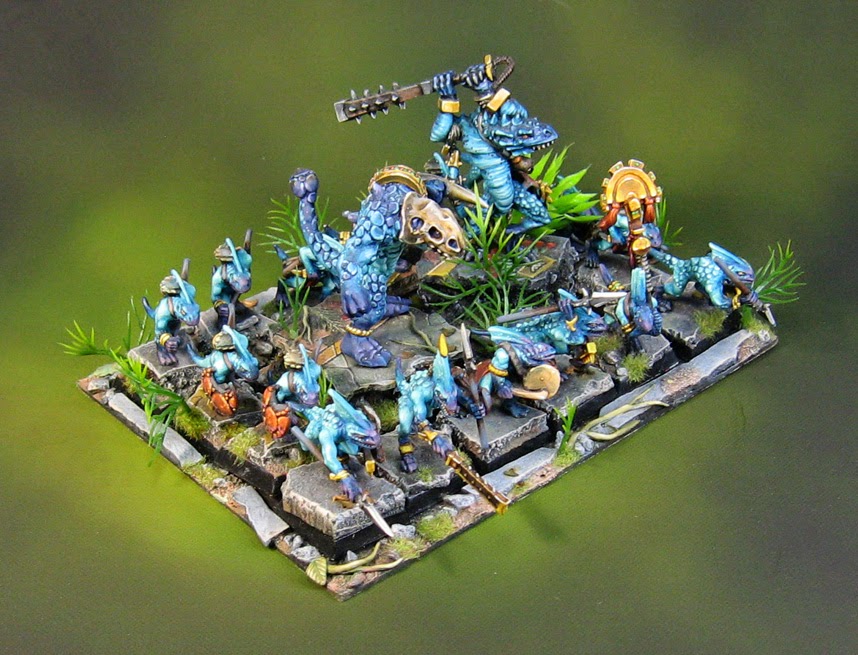 I was surprised at how nice this unit looked on the red backdrop.  I was hesitant to even try it.  That's why I love all the Hangar 18 backdrop options!  One never knows until you set it up and snap some images! 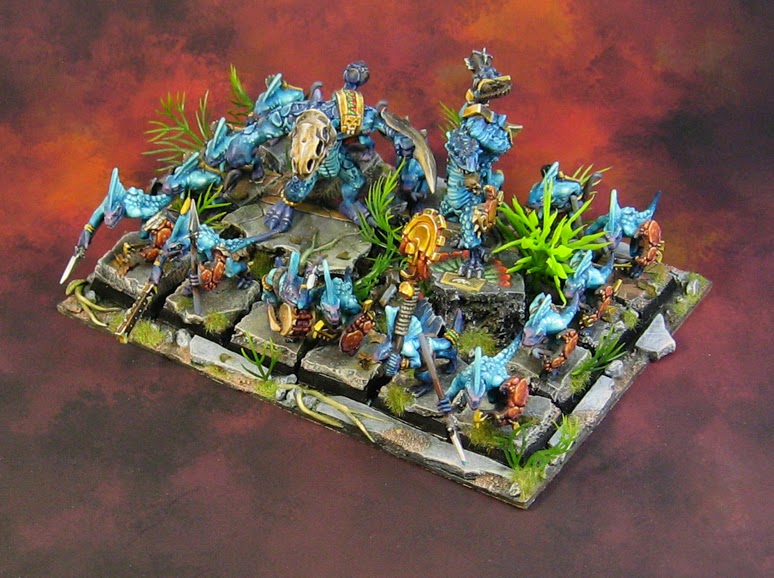 Next up I will feature some Chameleon Skinks.  I enjoyed painting those, and making the movement trays for them. 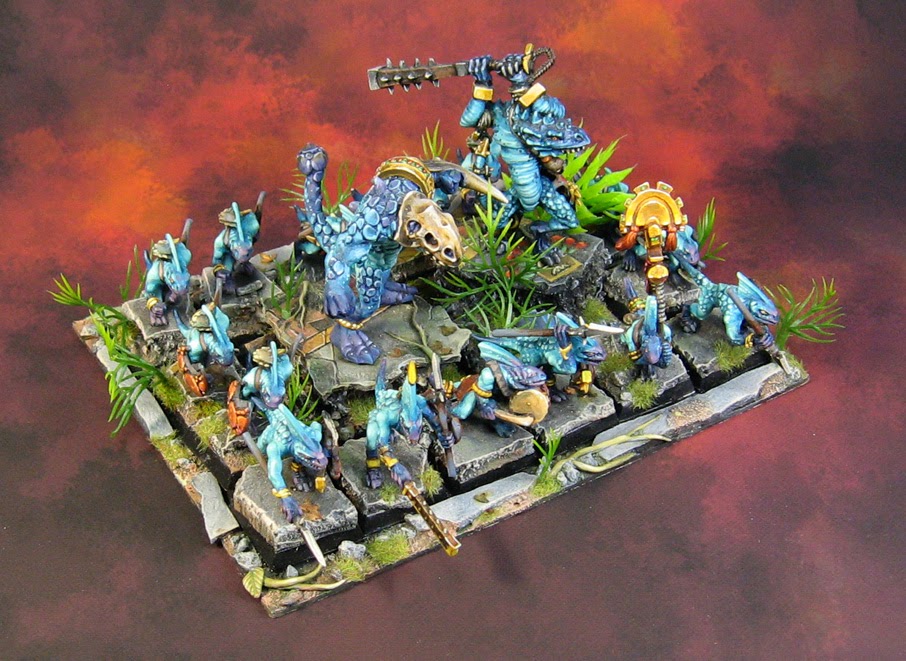 Posted by wappellious at 4:38 AM 2 comments: