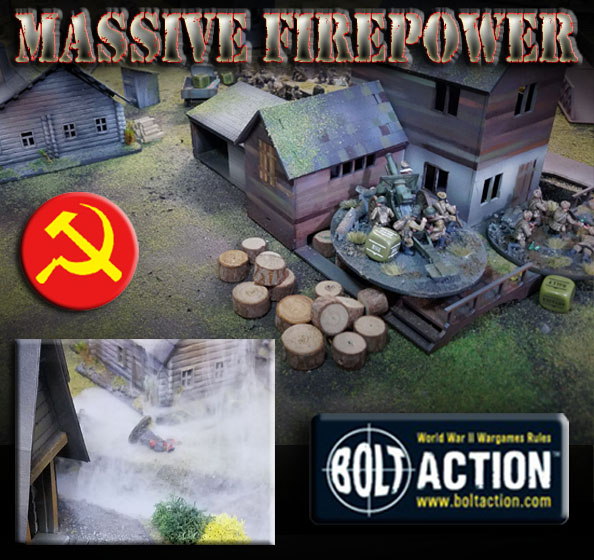 The bloody drama continues to play out across the Pripet Marshes, with the German forces trying to achieve an encirclement of the vast Soviet troop presence in this sector.

Multiple attempts to outflank the Red Army were made by light armored elements such as the SDK fZ 232 armored car and the Panzer 38T. 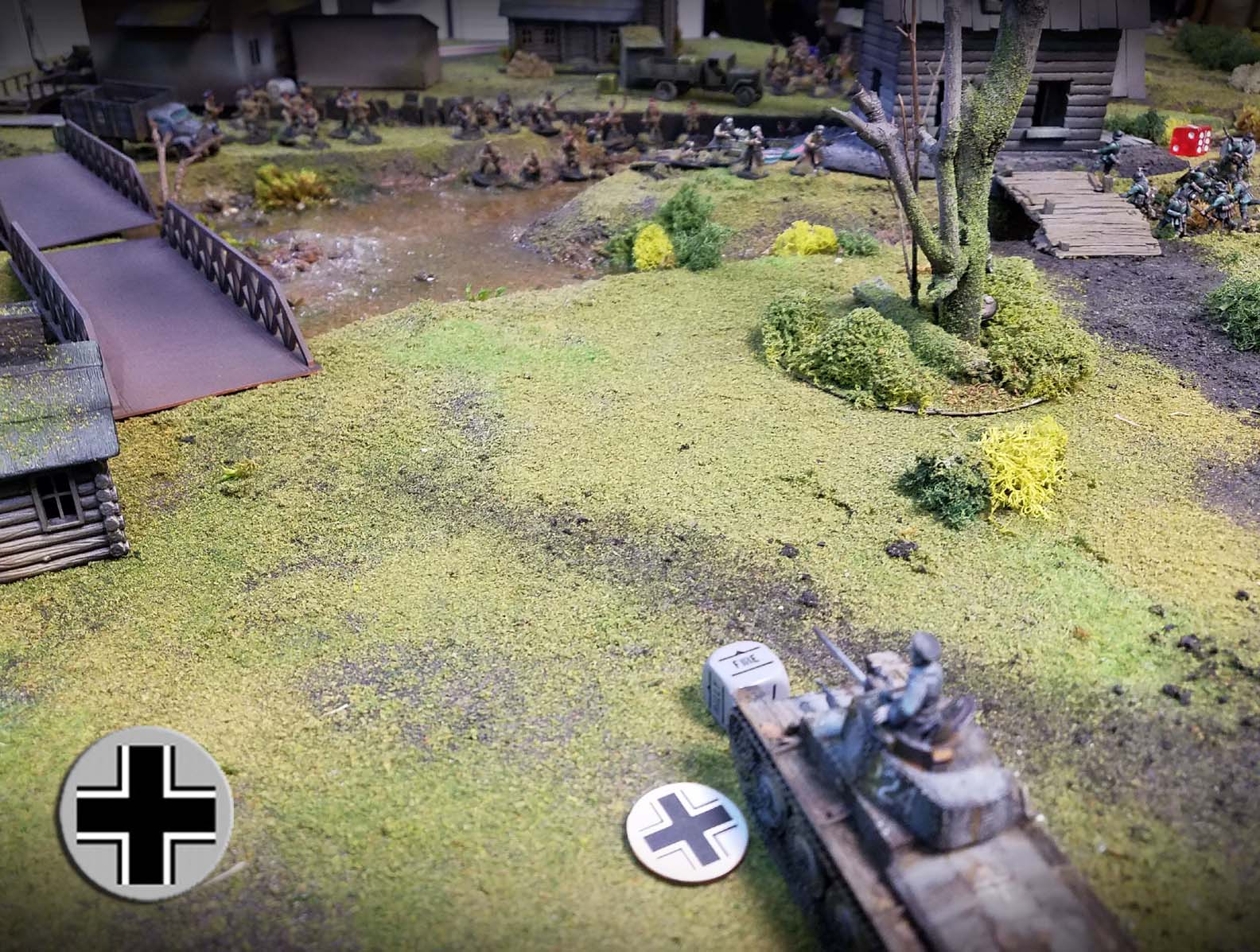 Static units of the German force found themselves under constant barrage from the Soviet heavy artillery in the form of mortars, howitzers and the rocket launcher.  This team better get in its shots very quickly before the dreaded Red Menace can range in on them!! 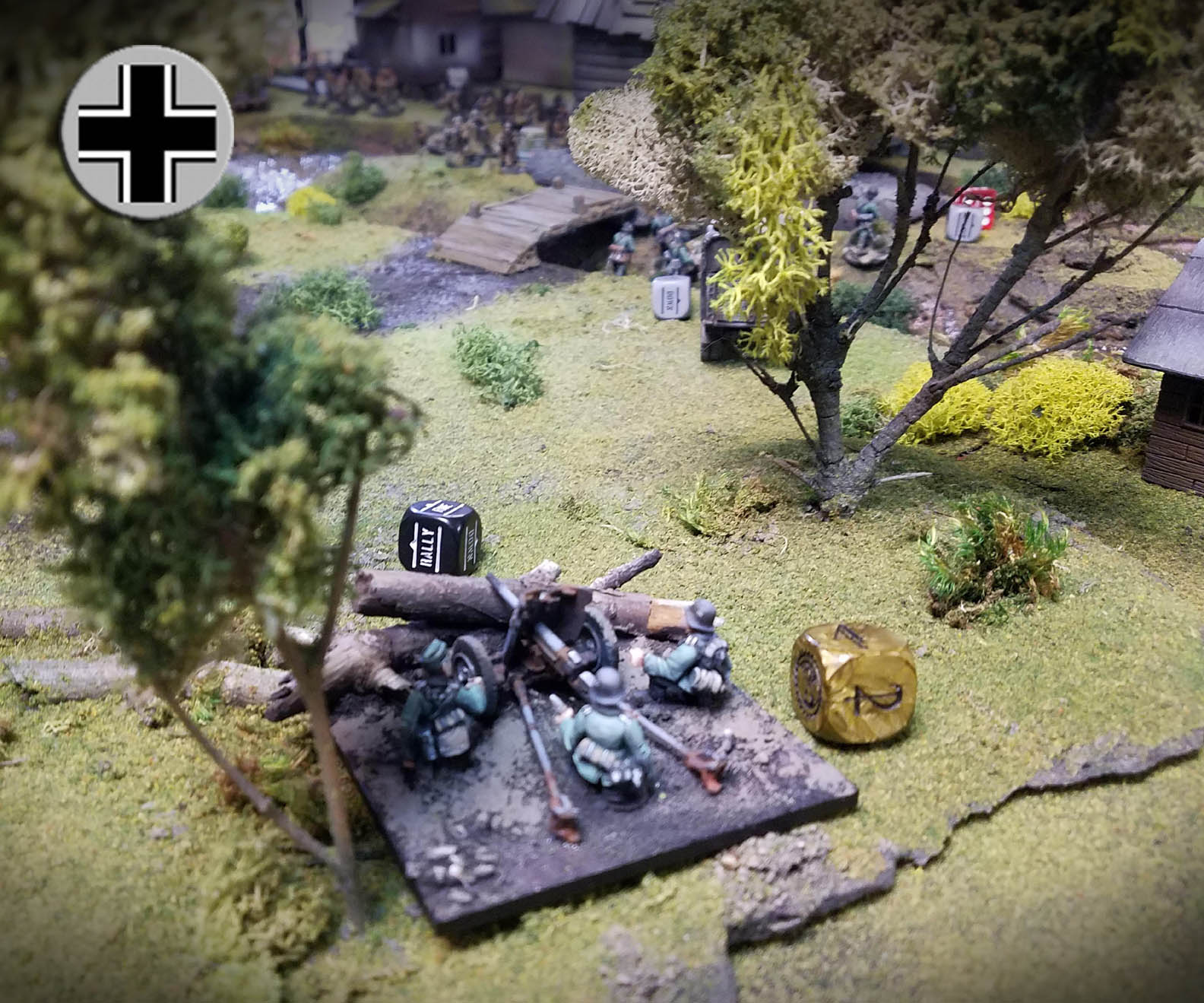 While taking a number of casualties, the veteran units shrugged them off as they pushed even further into enemy occupied sectors. 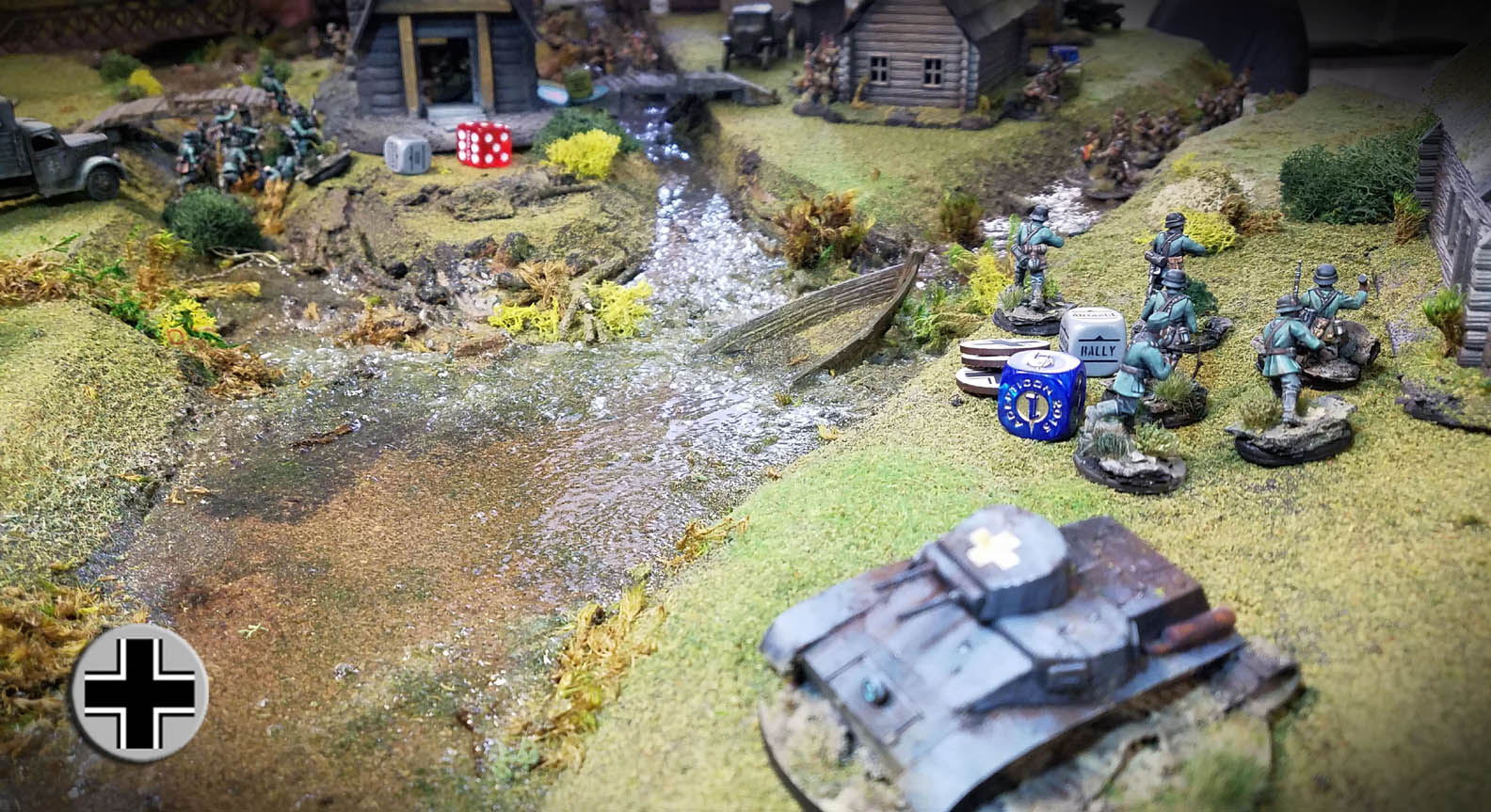 However, the new Soviet commander was utilizing the deep river gullys that had been carved out over many years of lumber harvesting in this village.  In contrast, the German forces had to advance over mostly open terrain.

Speed was not on the minds of the Soviet commanders, as barely trained soldiers sloshed through the riverbeds... 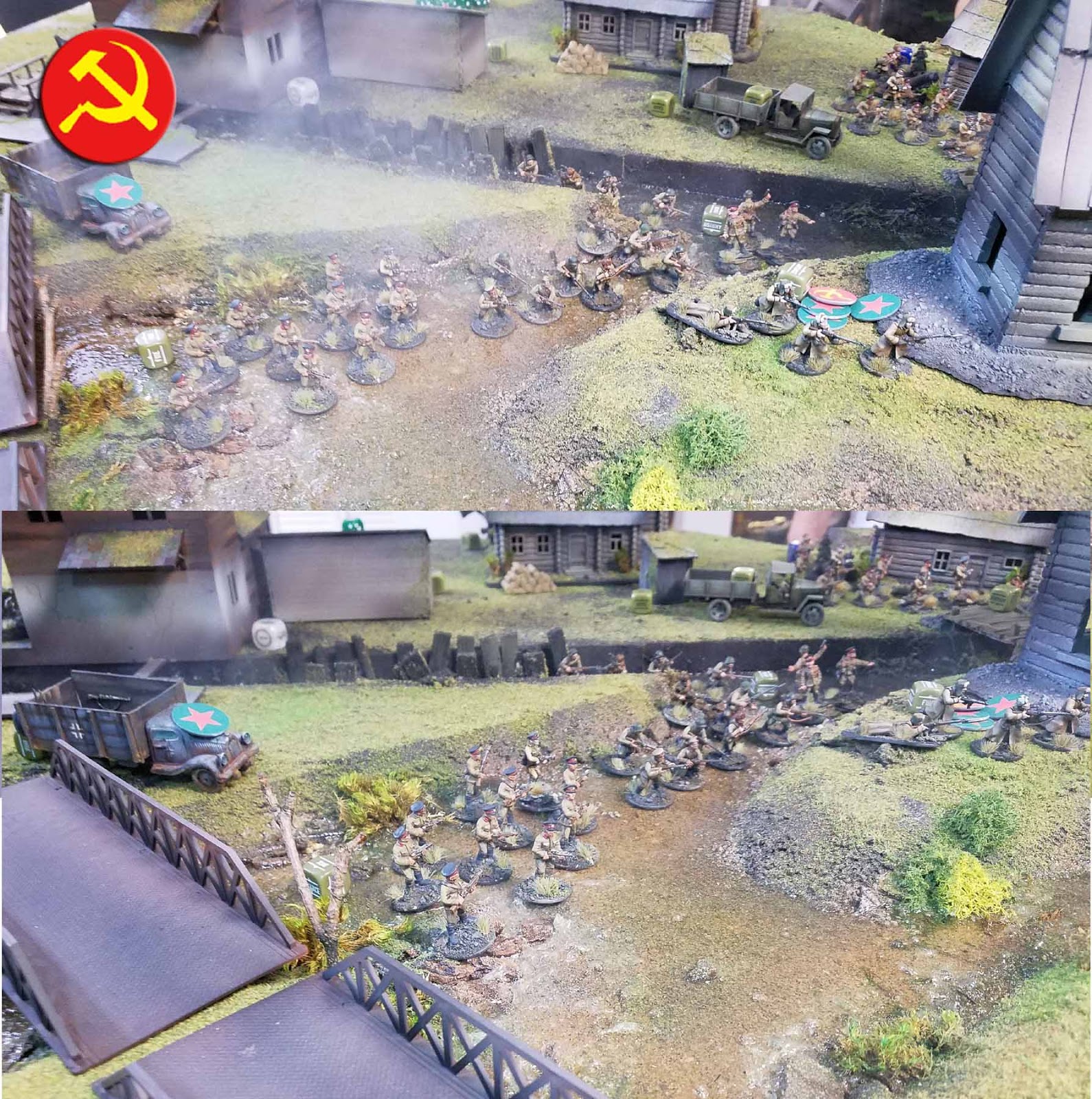 The Red Army refused to use the bridge, choosing instead to take cover against the banks of the river.  While the German forces did not have much armor, that was making any direct use of the bridge very hazardous for the captured Blitzes. 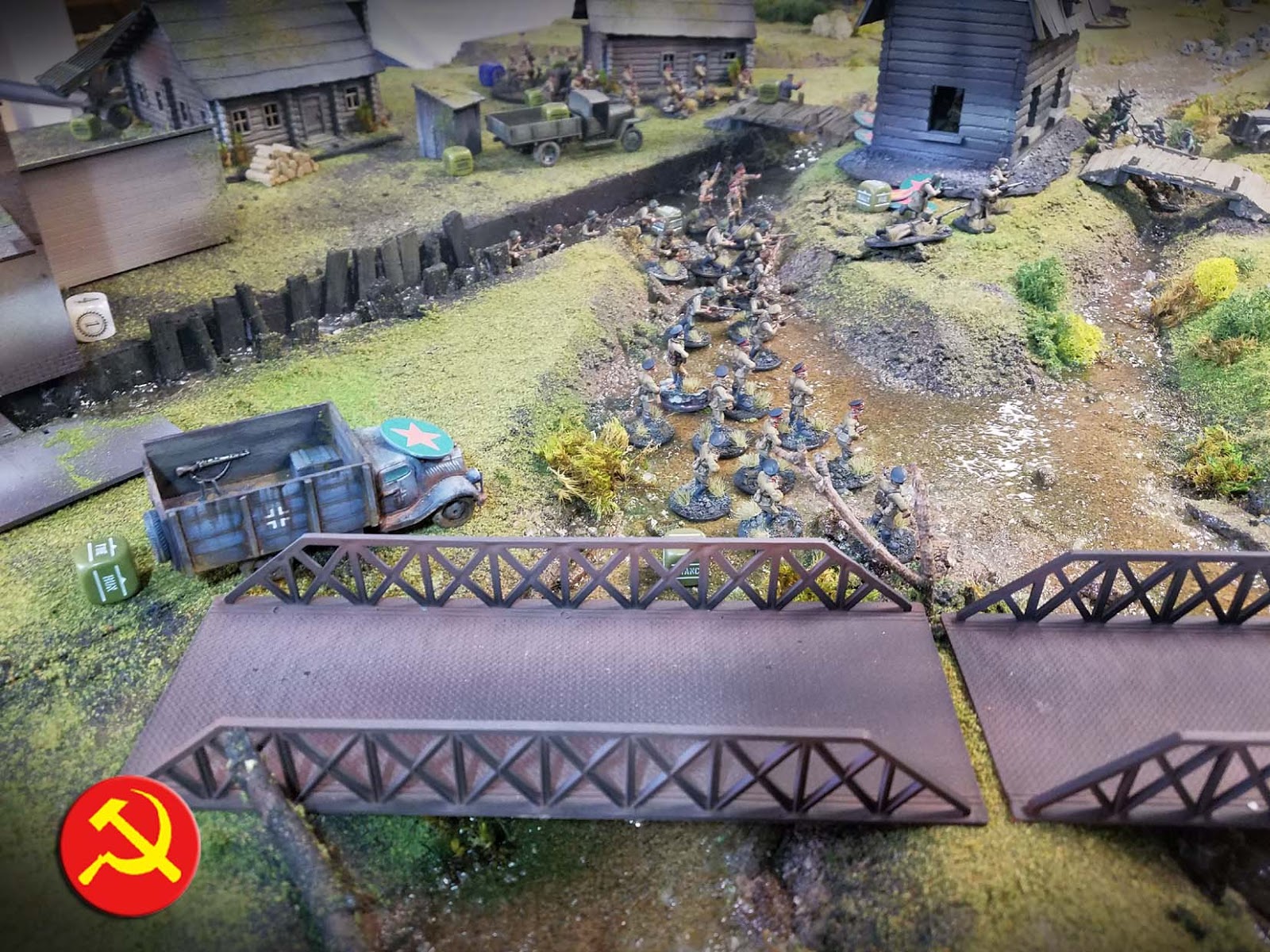 As the main body of the Soviet forces sheltered in the river, the artillery continued to pound the German positions.  Once the invaders had been sufficiently weakened, the new Commissar Royamanov felt that he could finally push his troops into contact with his enemy. 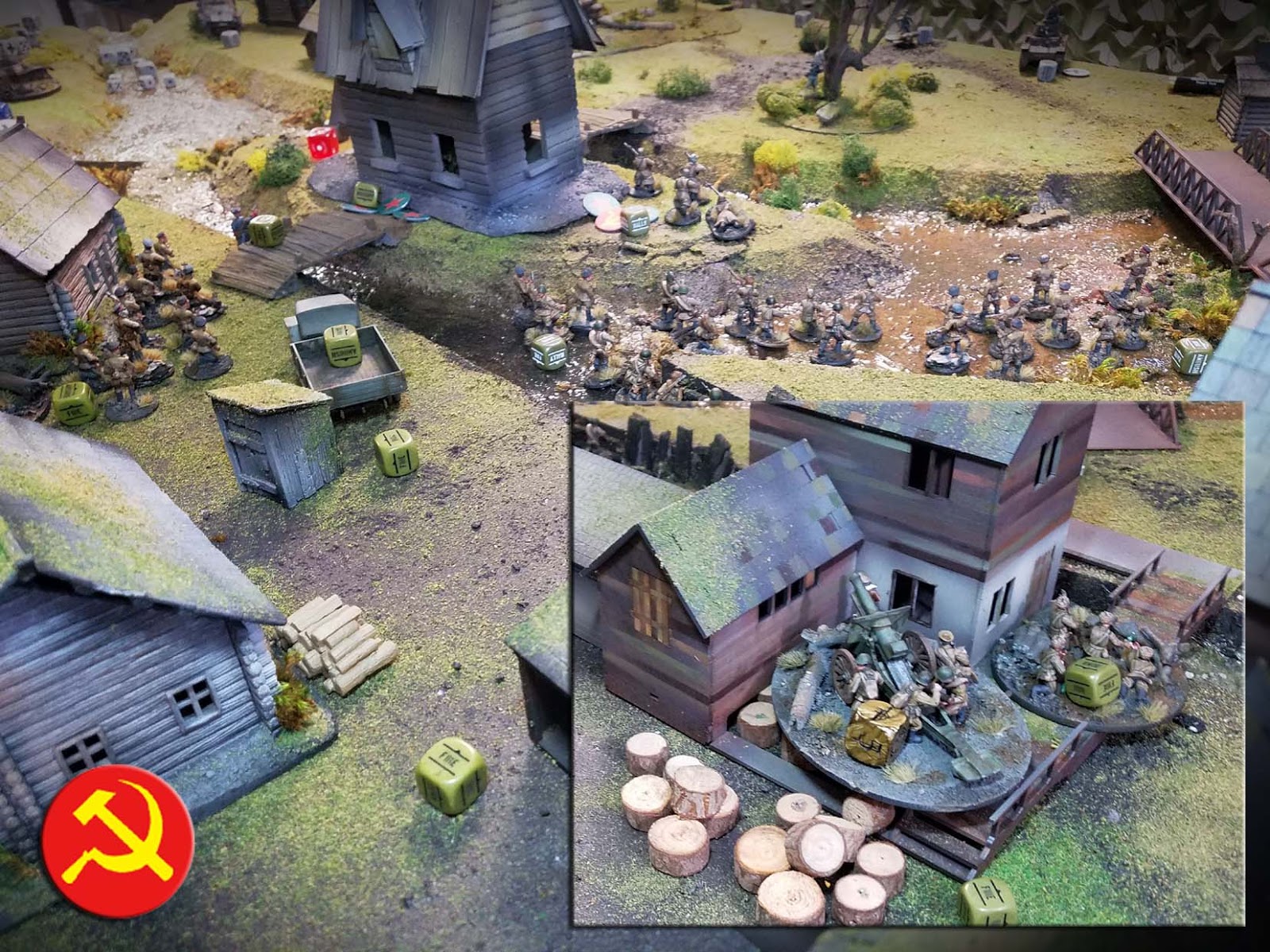 However, the wily German commander had been waiting for this tactic, recalling what had happened in the first battle over the village.  The armored car opened fire with both its autocannon and machine gun, felling the Red Officer where he stood!

Commissar Royamanov suffered the fate of Commissar Royitski and Captain Albertofski... joining them as Heroes of the Soviet Union. 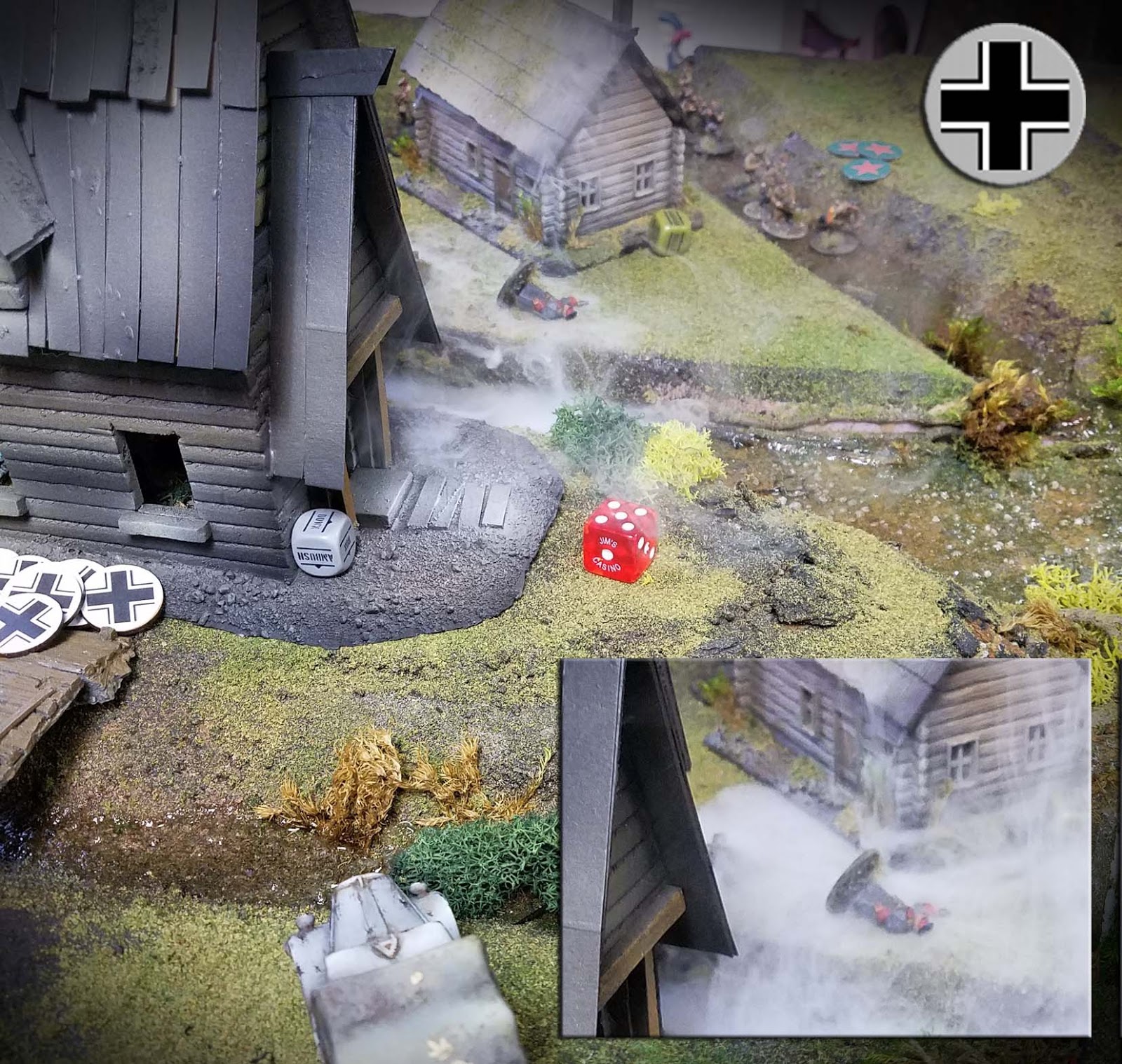 Unbelievably, the veteran unit had held out against point blank fire into the wooden church.  Could they anchor the final German advance and secure the victory, or would they be overrun by the Soviet Hordes... 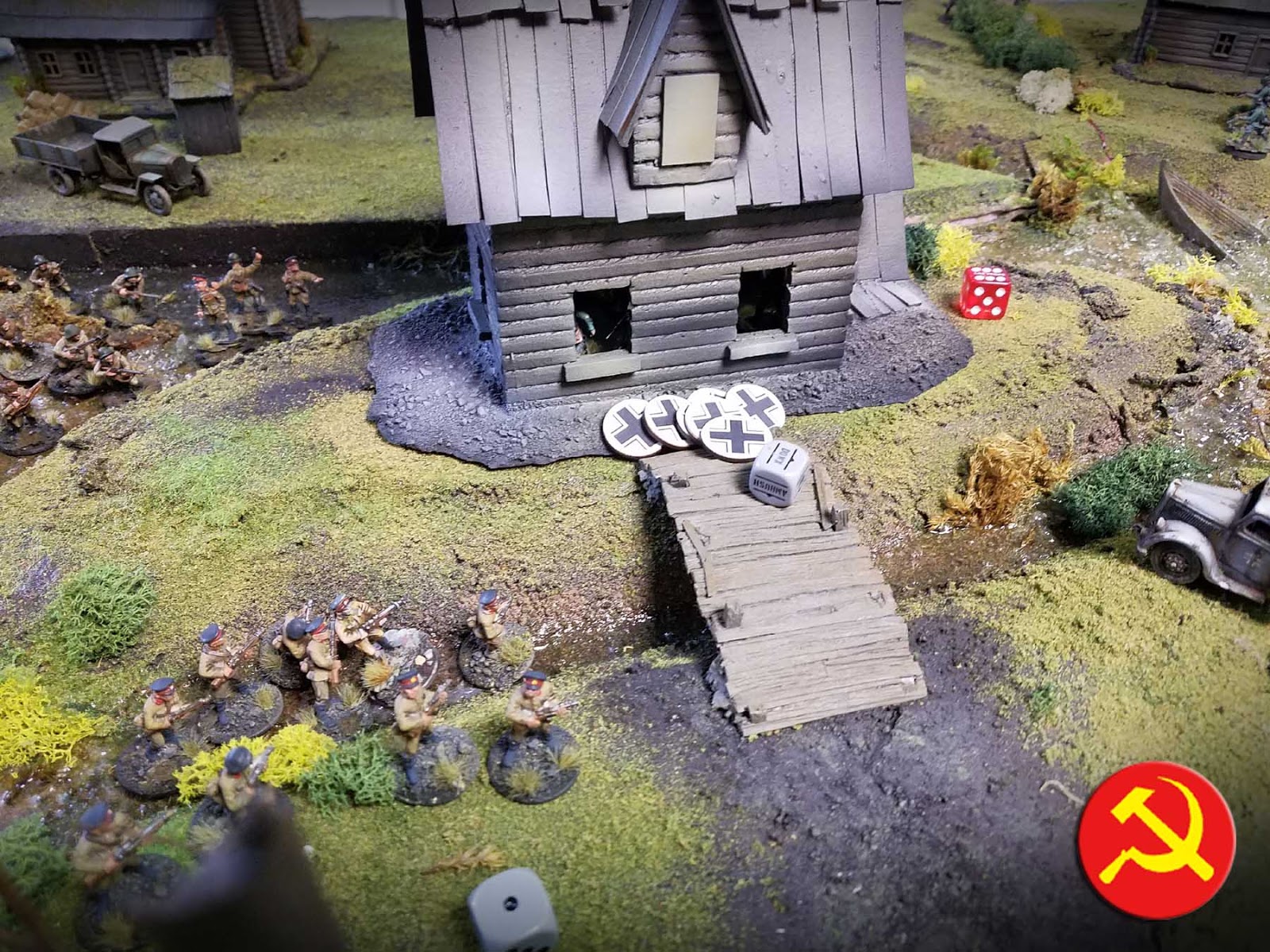 It was now that the NKVD units began to push out from their hiding places in the river.  Perhaps seeing their new Commissar killed enraged them enough to disregard the hail of fire from the waiting German units. 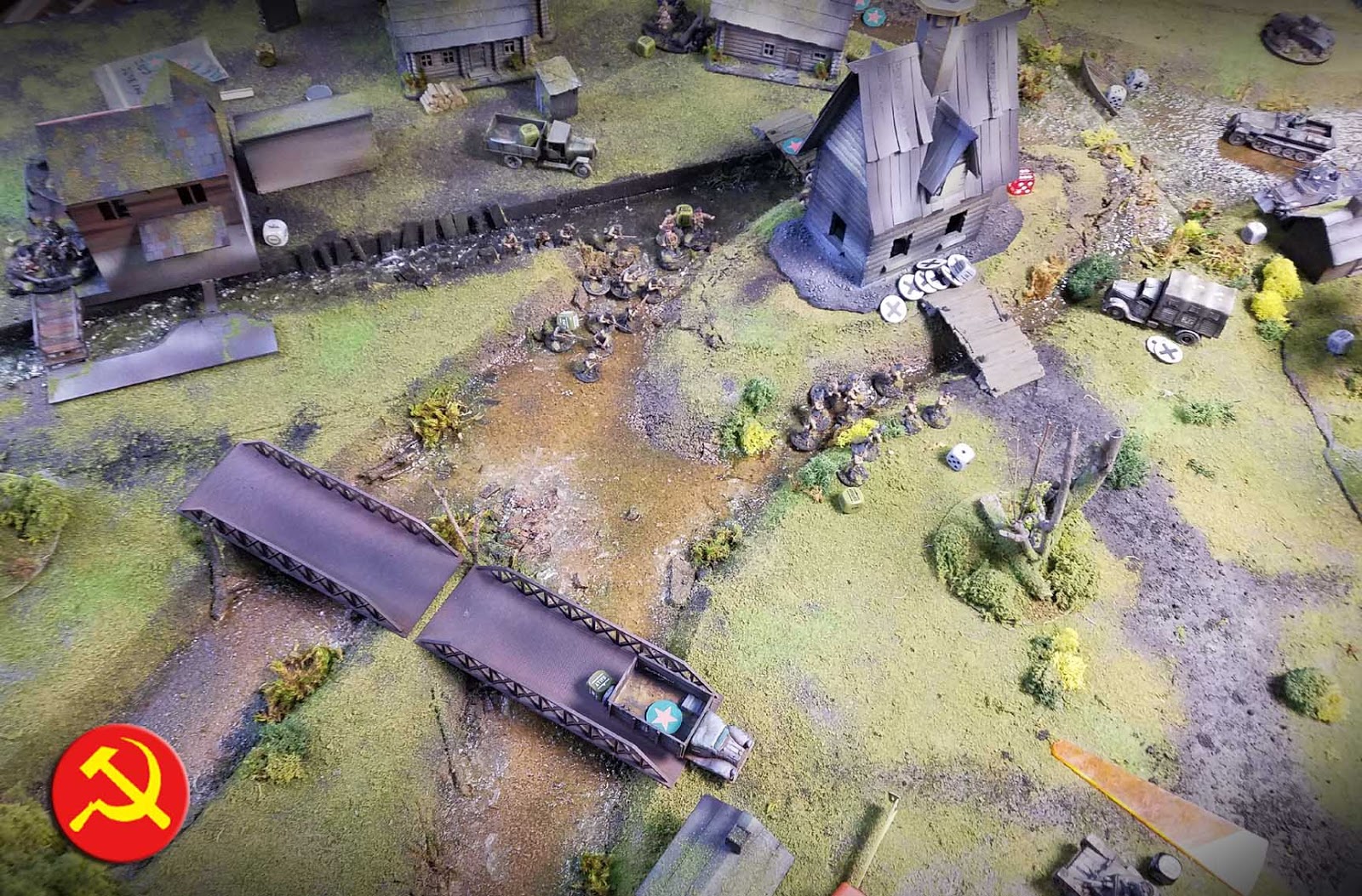 The German units in this neutral sector tried valiantly to hold on, but they were ground down by continuous small arms fire.  After losing so many of their number from the rocket launcher, it did not take much to kill the rest. 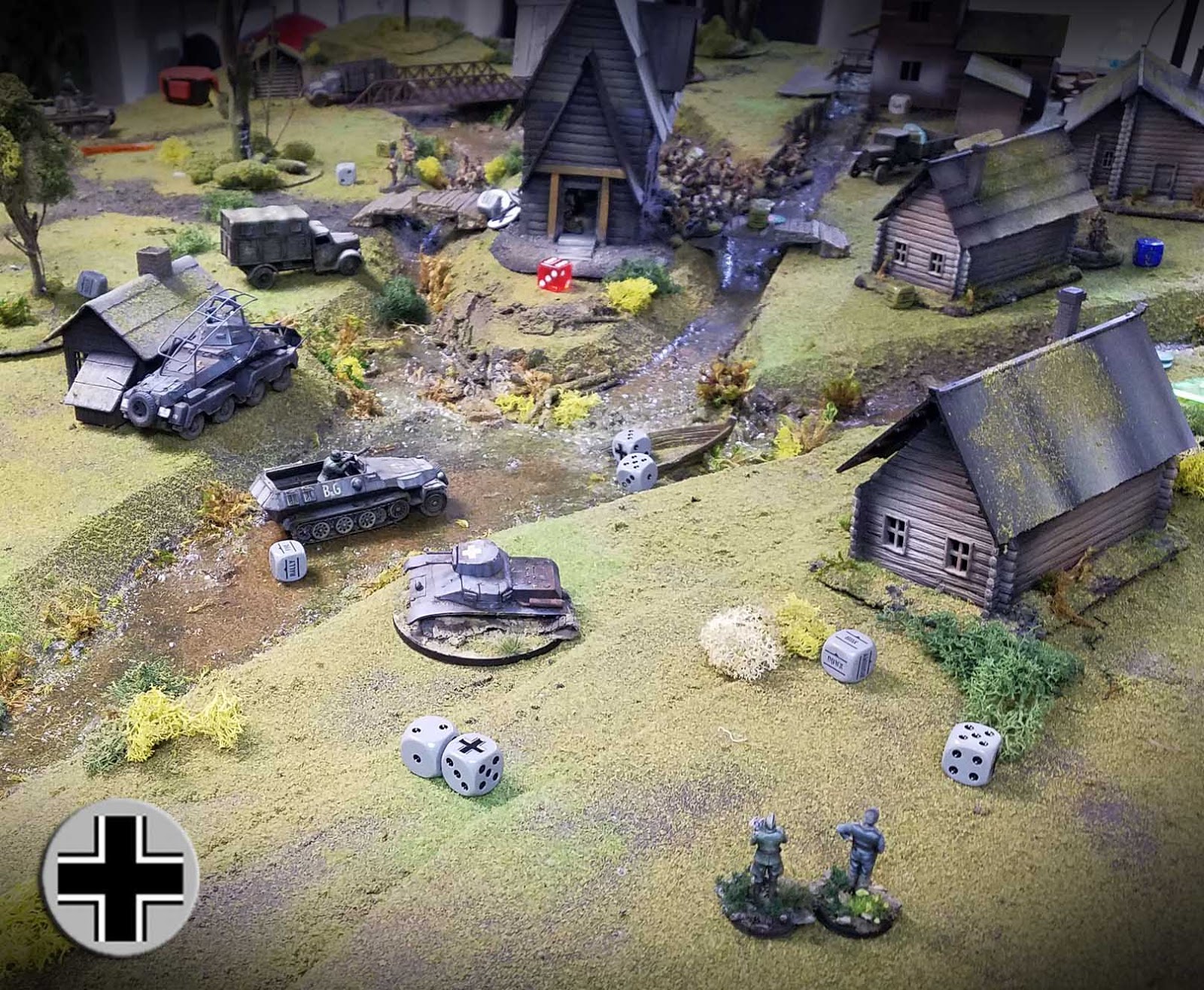 Those casualties would prove decisive, as the Soviet advance was stalled just in time! 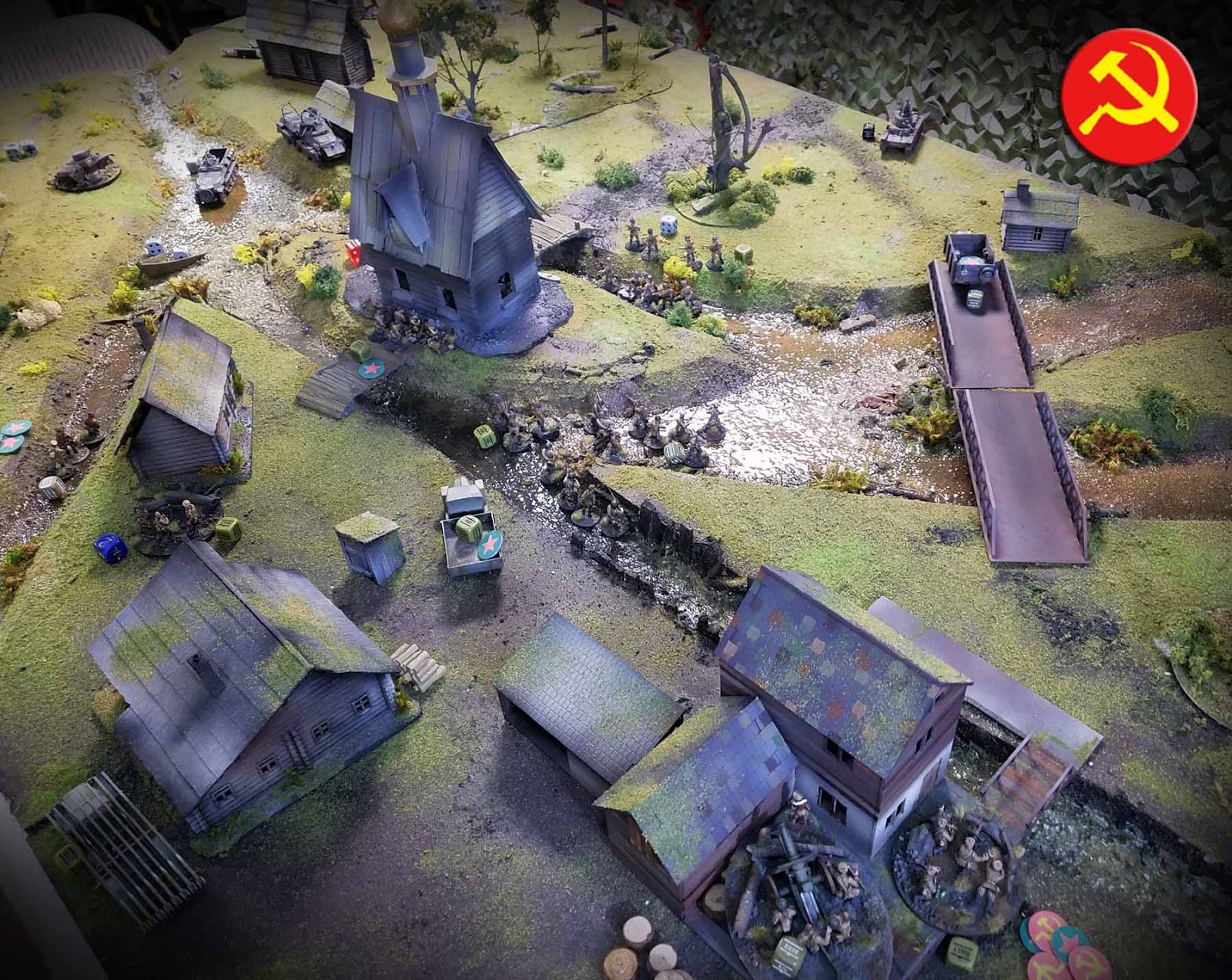 The loss of those two infantry squads made the difference, as the Germans lost the 2 points they were holding, in addition to the 2 points the Soviets received for the kills.

It is clear to the German High Command that this town will require a more powerful force to liquidate.  Those reinforcements are already on their way, and soon the battle will be rejoined.

Also on his way is the new Commissar Roytovka... will he be the next posthumous Hero of the Soviet Union? 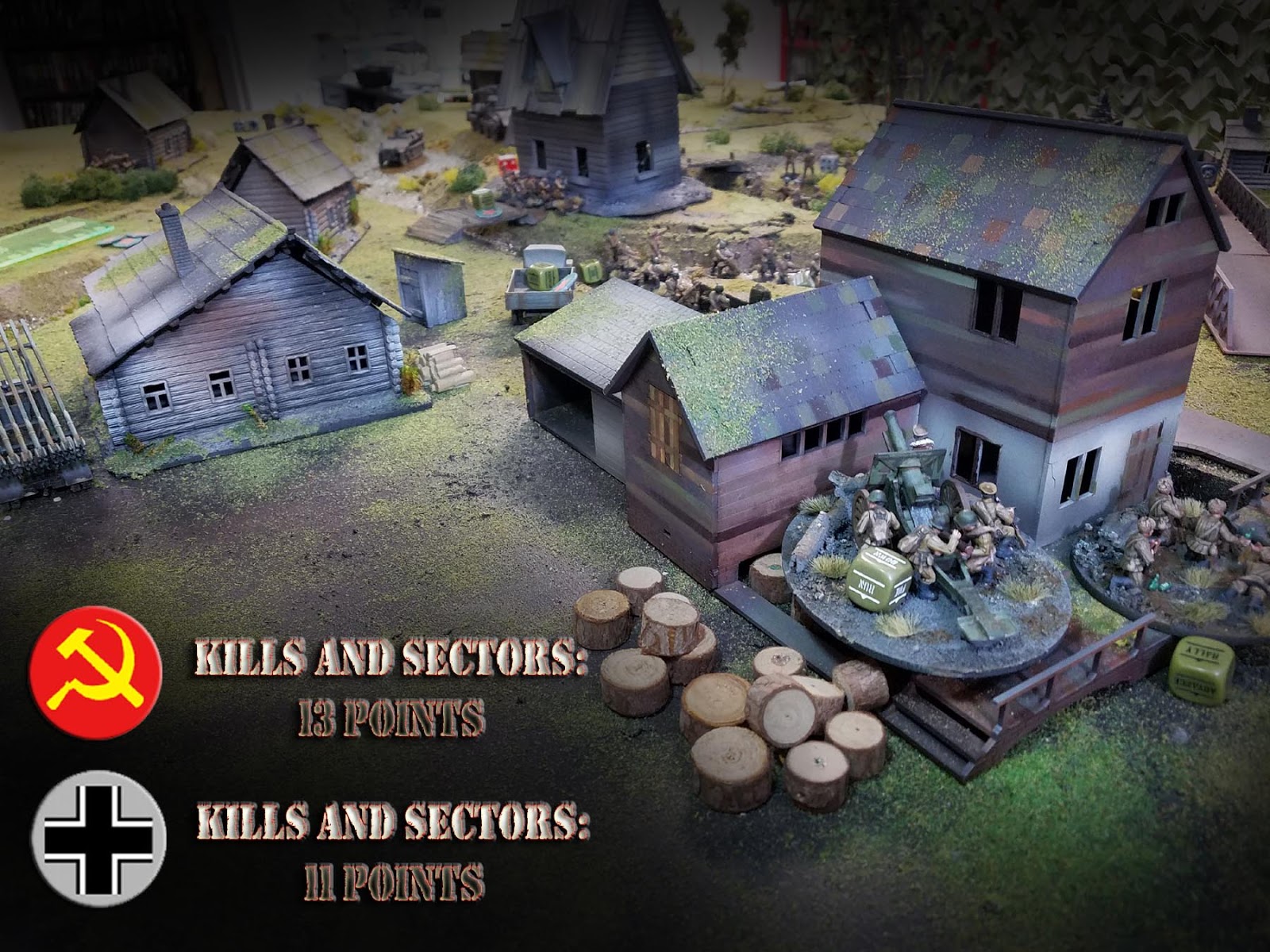