Close ups of the Celtos mastodon 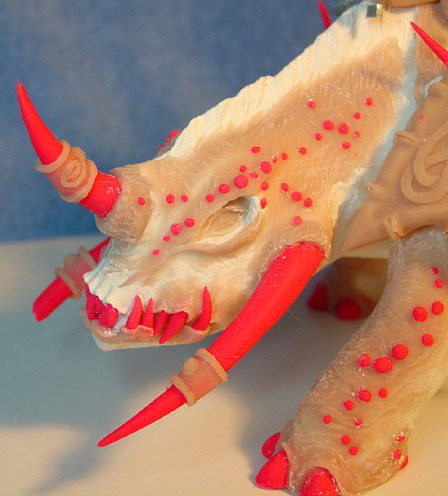 As the Holidays draw ever closer, we have some close ups of the Mastodon, as promised!

First, however, we have that artwork I told you about.  There were numerous drawings such as this in the rule books of creatures and chariots, etc., which I thought were fantastic.

So, I set about making this drawing come to life. 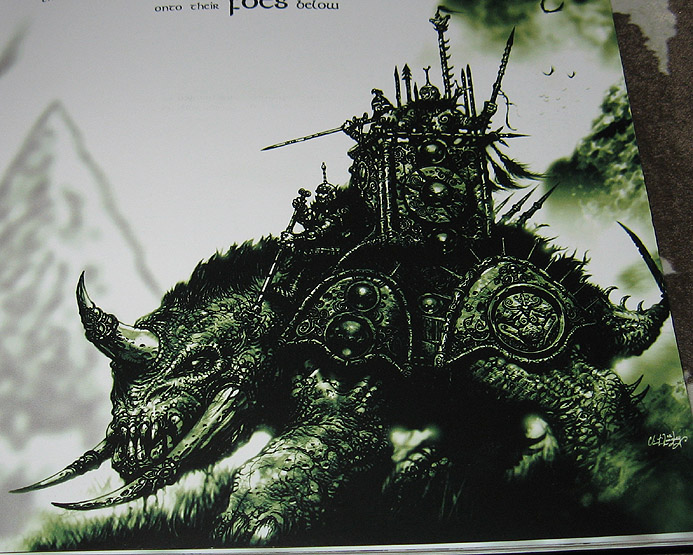 I won't repeat my descriptions about all the various types of sculpey used from yesterday's post, so I will mostly let you check out the images unabated by my senseless banter! 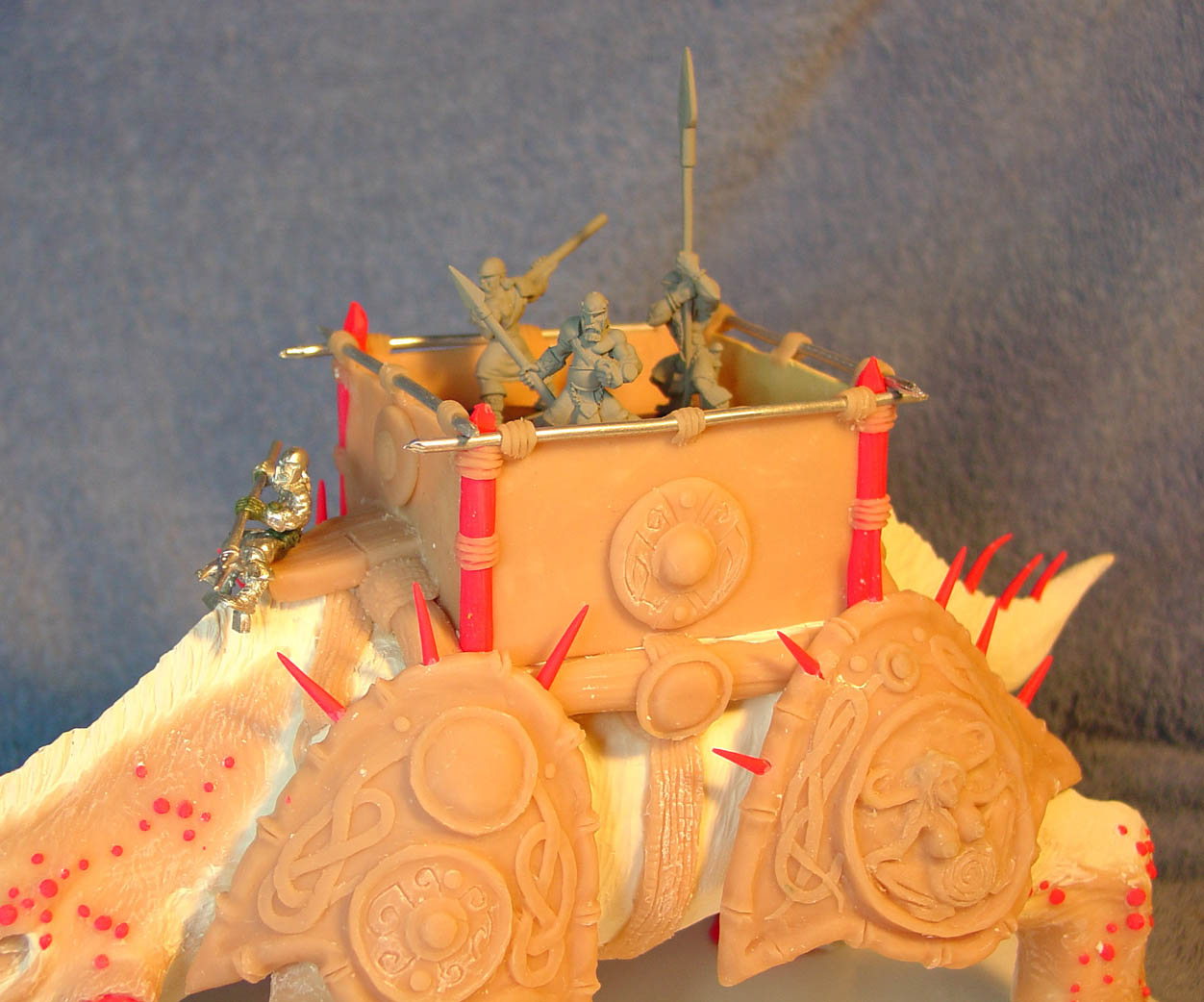 Some close ups of the howdah, and the figures inside... 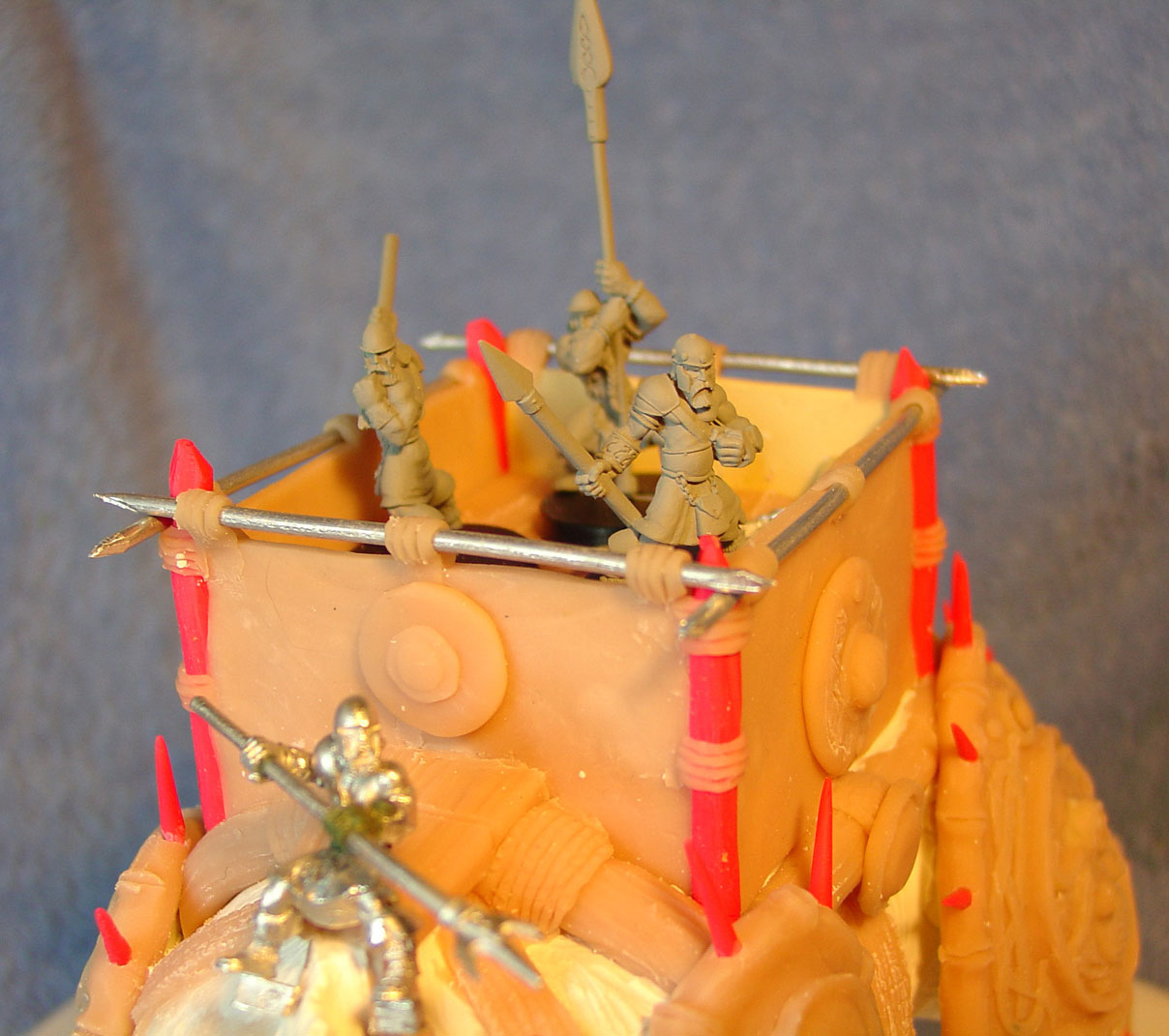 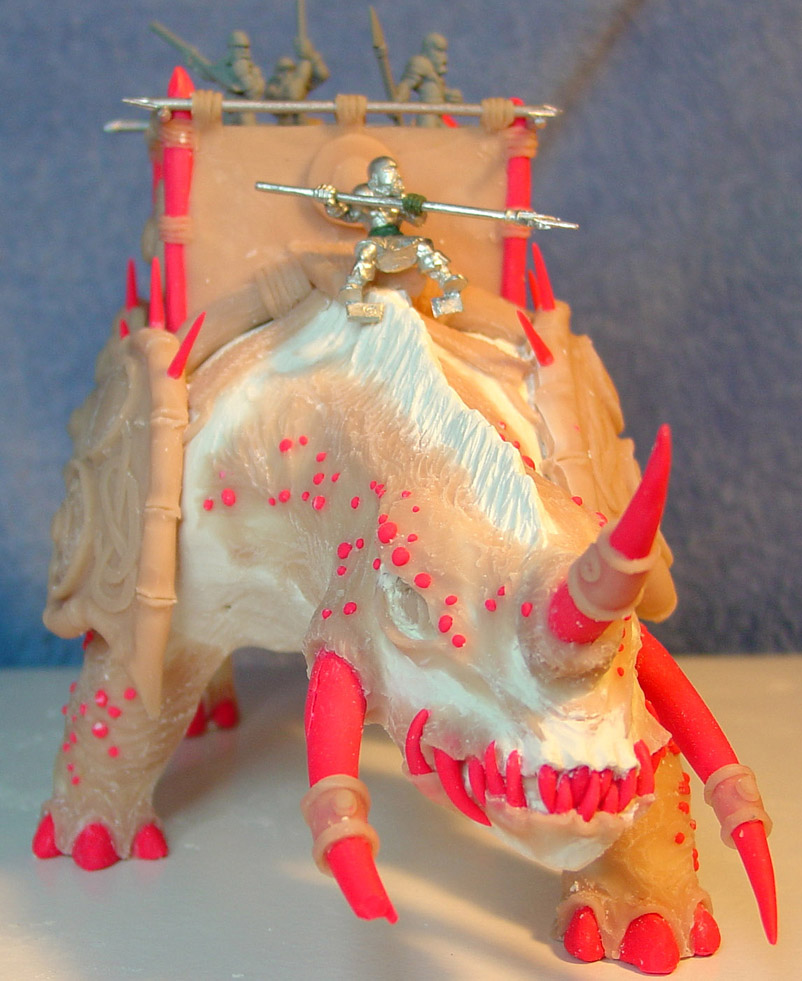 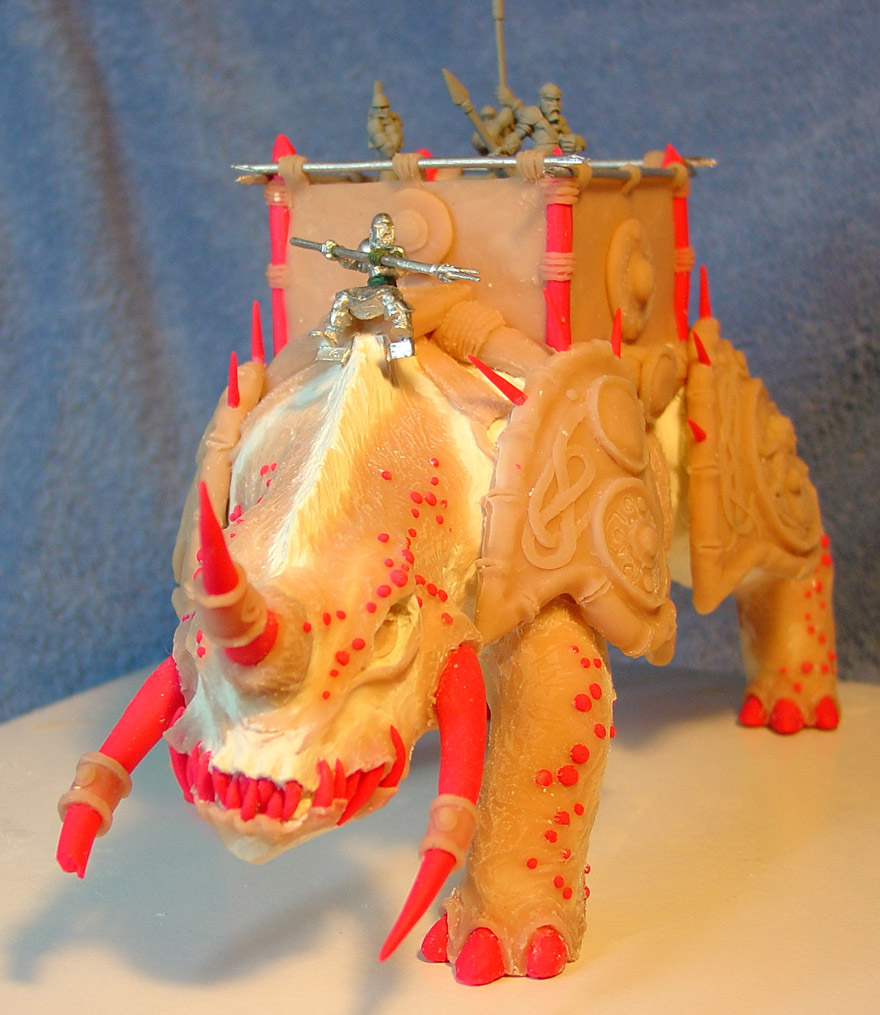 Ain't this a pretty face? 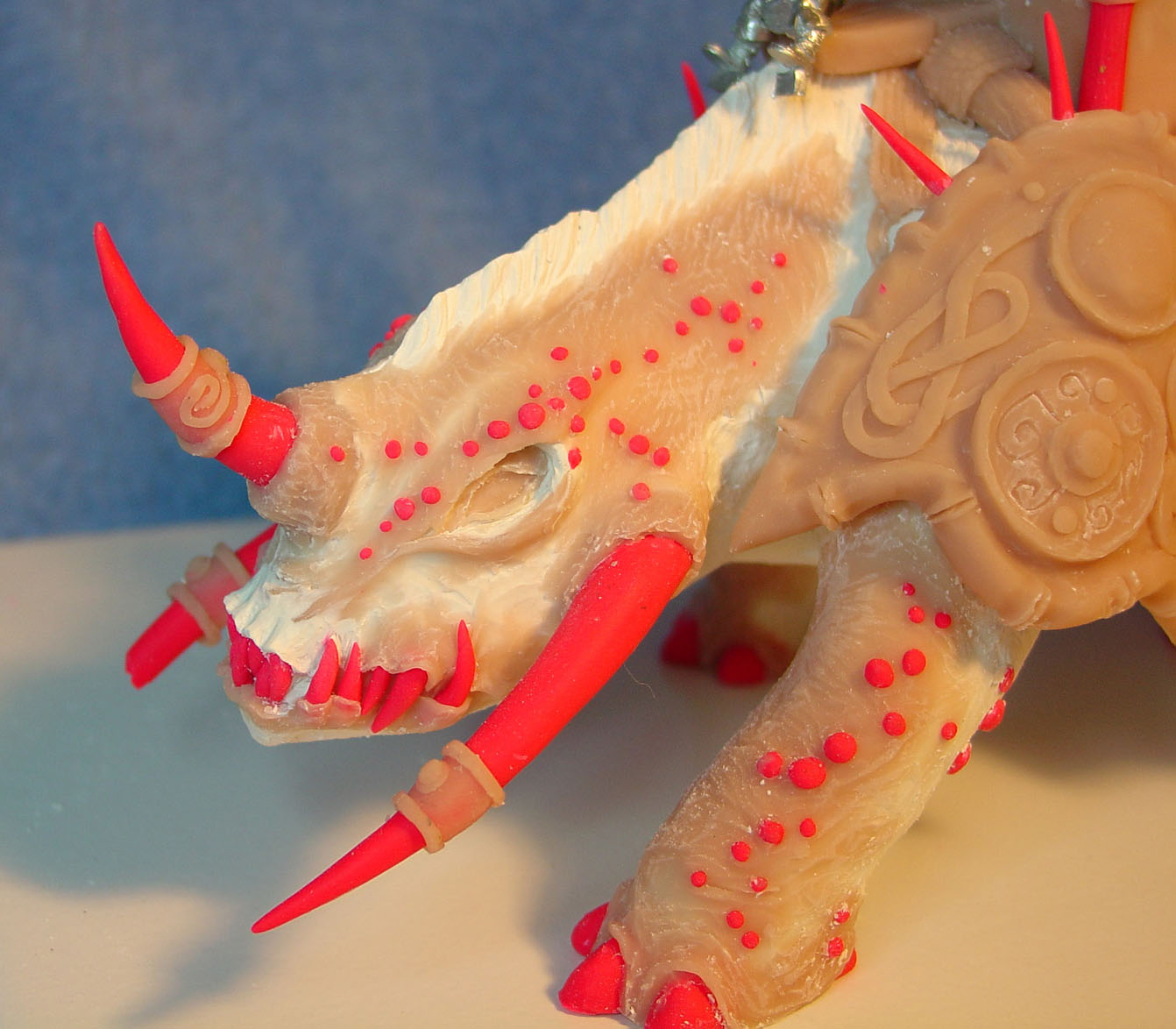 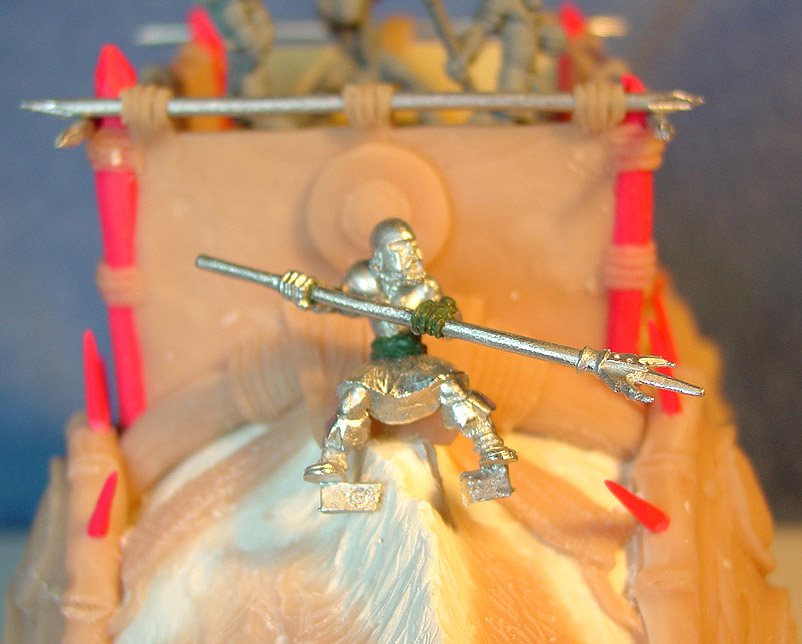 I am really hoping that the kickstarter reaches its initial goals, since one of the 'down the road' stretch goal DVD's I'd like to make involve sculpting big monsters from scratch like this.  I don't get many opportunities to sculpt things from scratch, and monsters are something I absolutely love to do!!!  It is so much fun.
Posted by wappellious at 7:53 PM No comments: 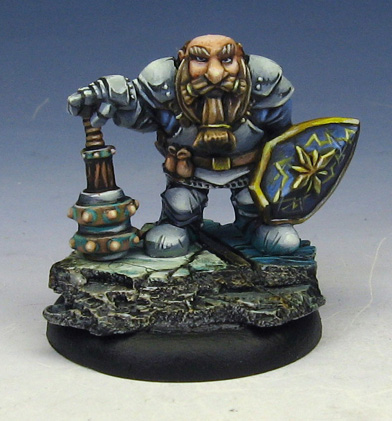 On this Christmas Eve eve, we have another member of the Stonehaven Dwarf Kickstarter.  This time, it is Aldon Oathkeeper.  When danger is afoot, Aldon takes the lead, going to great lengths to protect his companions.

And here is someone who goes to great lengths to protect his precious cookies.  Master of the Cookieverse... BABO! 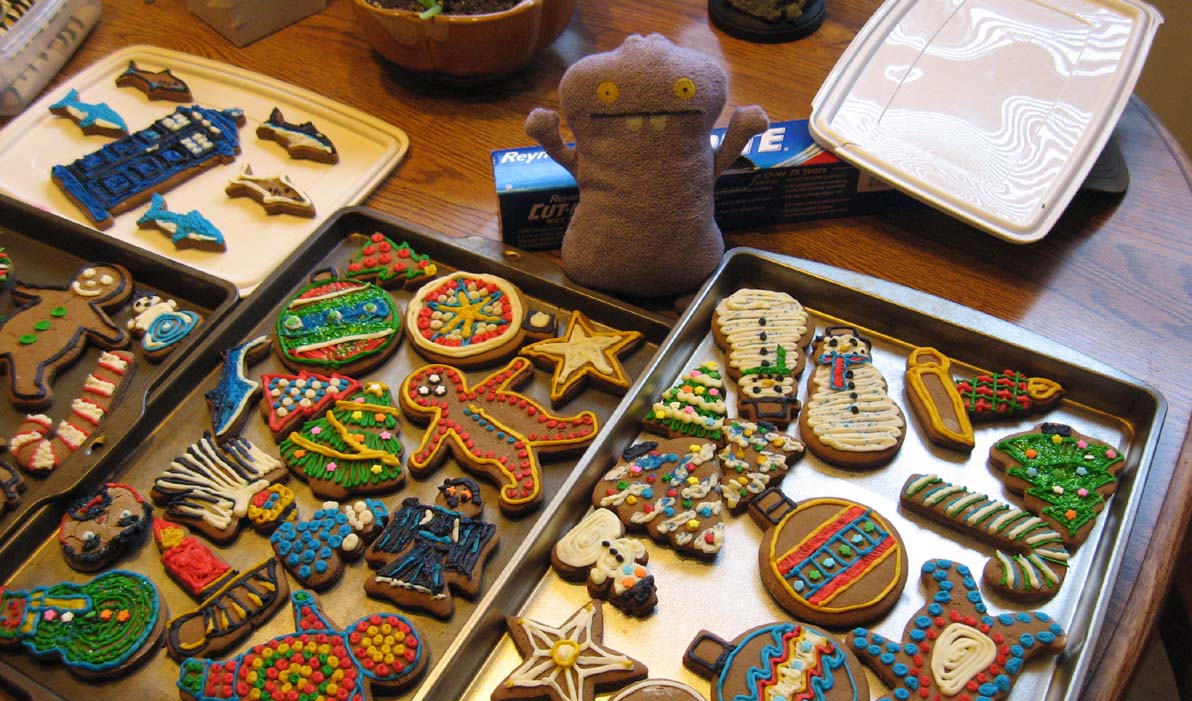 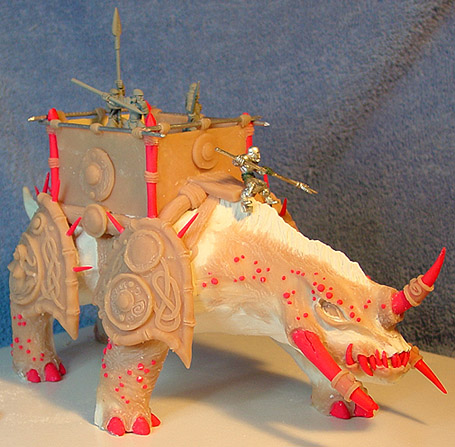 Still in the archives during this very busy time.  Did more research on the Kickstarter front, and made some more progress for the proposal.  In the meantime, here is something I did back in 2006.

I always liked the Celtos miniature line, and in one of the original rulebooks they had a wonderful drawing of this mastodon (I'll try to include that in the next post), and it made me really want to sculpt it!  This was the summer after I sculpted Grond, so doing large scale critters was not entirely new.

I started out with my tin foil armature, which was then surrounded by the white regular sculpey.  That was baked to keep the pose stable enough for subsequent layers to be added. 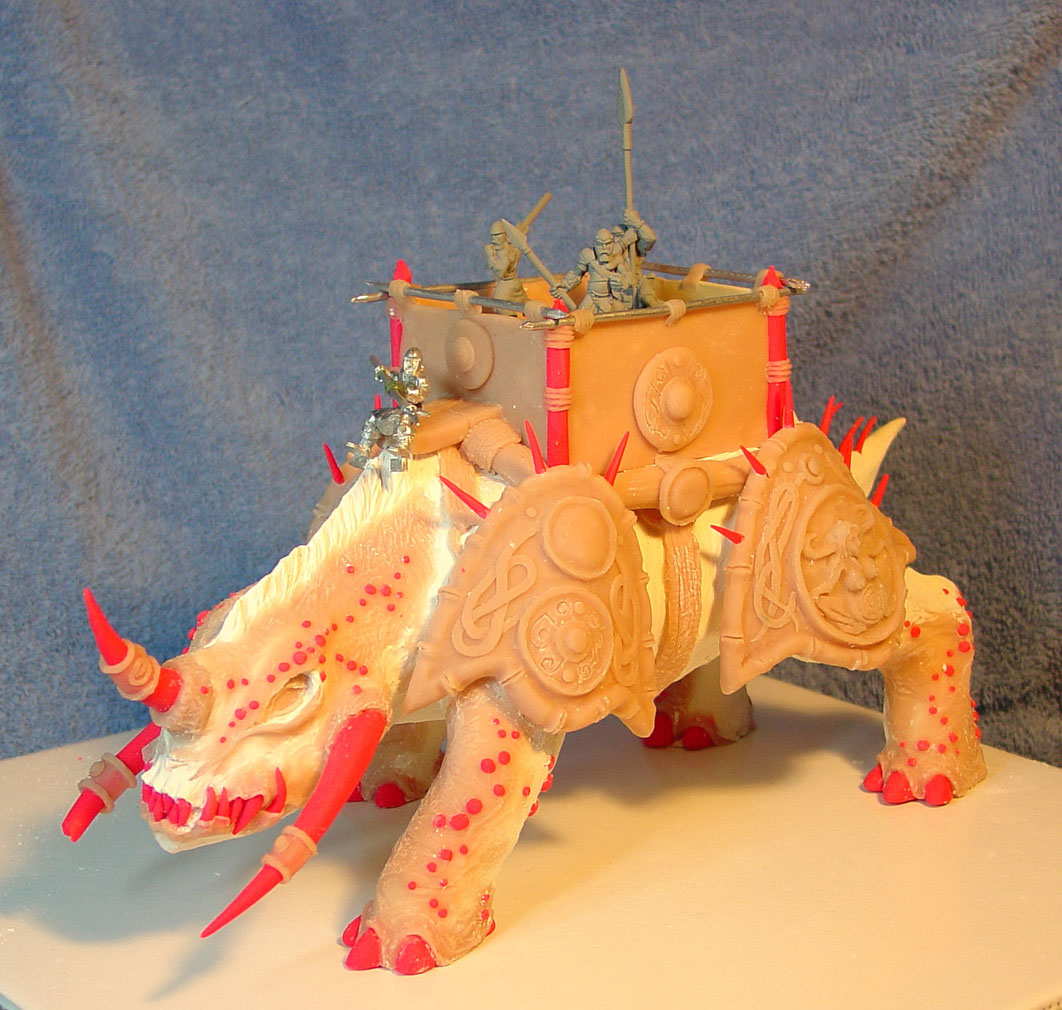 In fact, these WIP images are conveniently color coded!  The white sculpey is the regular variety, which you see me using for bases all the time.  The pinkish-orange sculpey is super sculpey, while the neon pink sculpey is sculpey III.  Each type has its own properties. 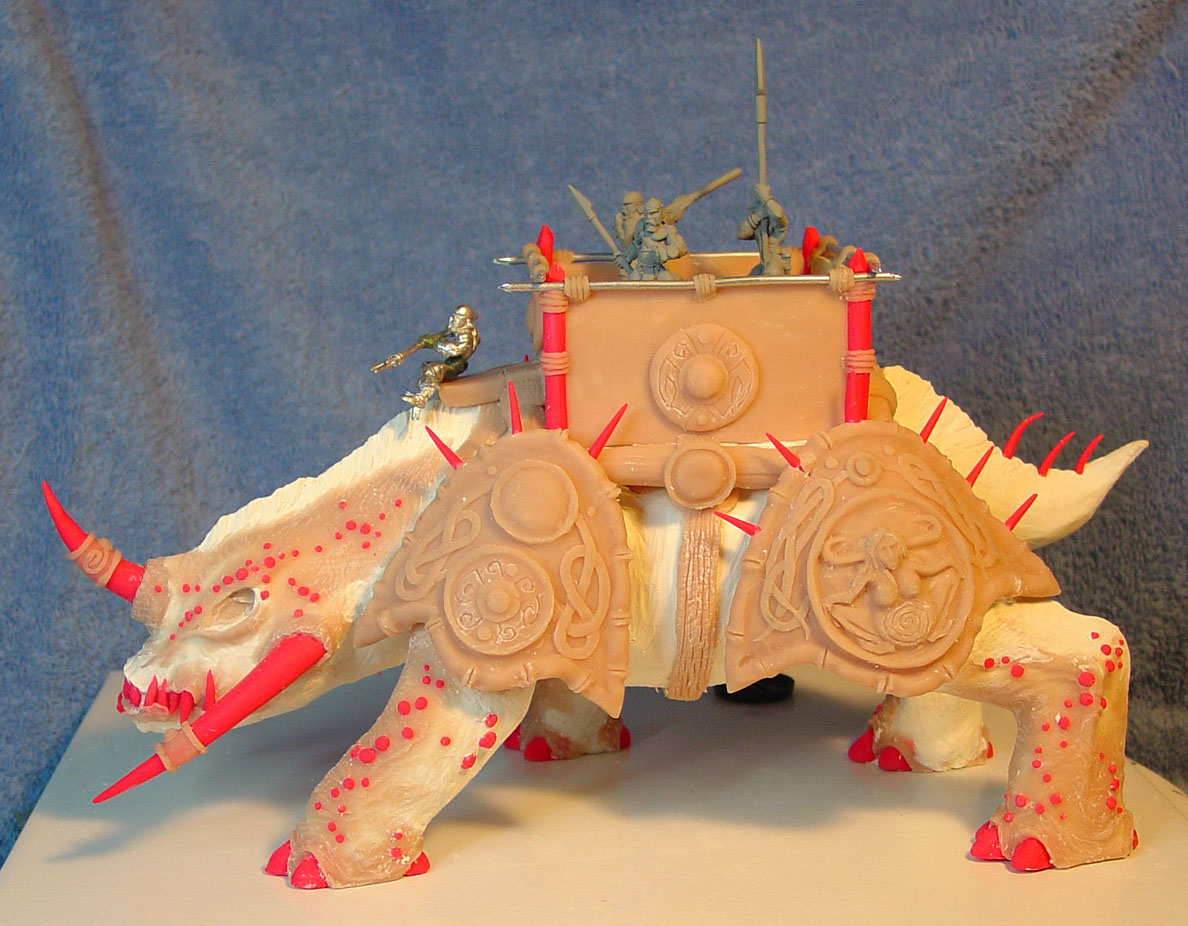 The Super Sculpey has more strength and resilience, while the Neon sculpey is the strongest of the three, but also the most difficult to shape.  You can see that the most potentially fragile parts were made from the toughest sculpey. 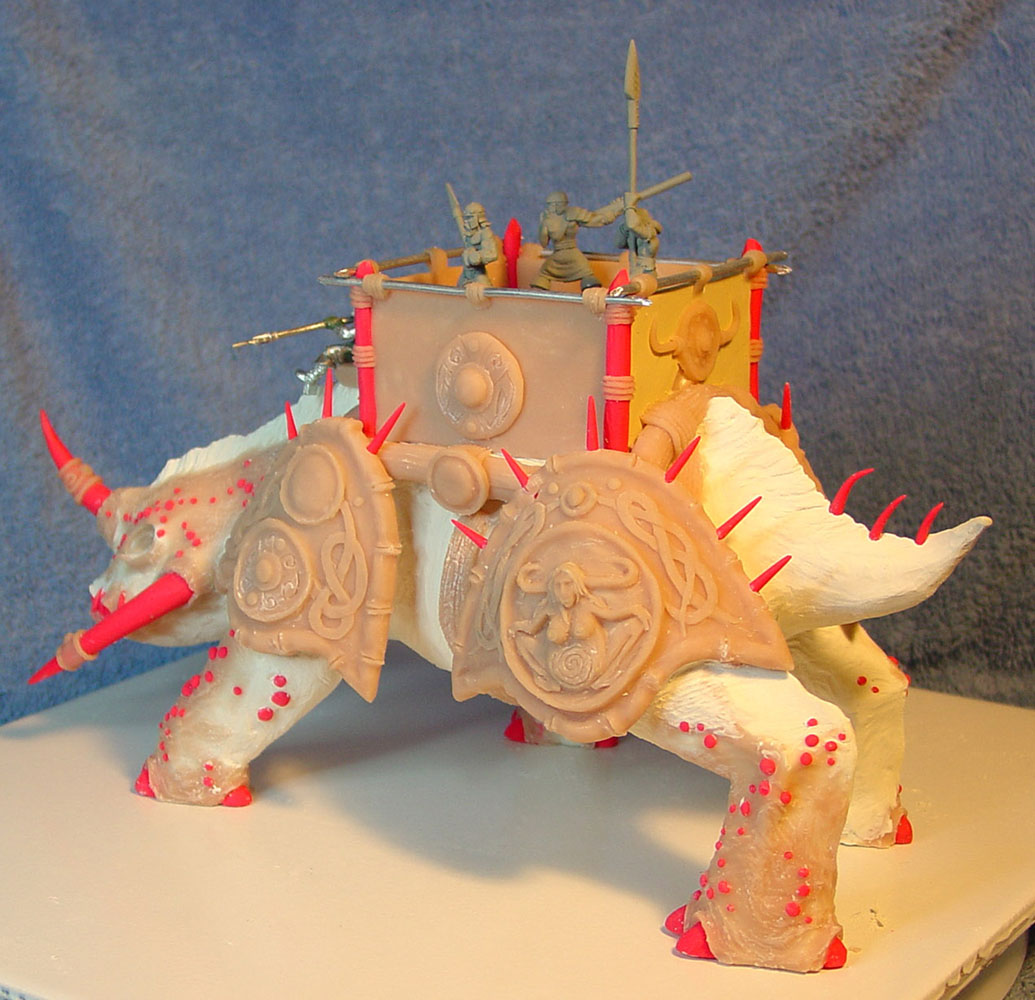 It is possible to bake sculpey multiple times, but you have to be careful not to scorch your original layers.  Of course, I decided to attempt this piece in the dead of summer, during a massive heat wave.  Bad idea, since it got mighty hot in the house! 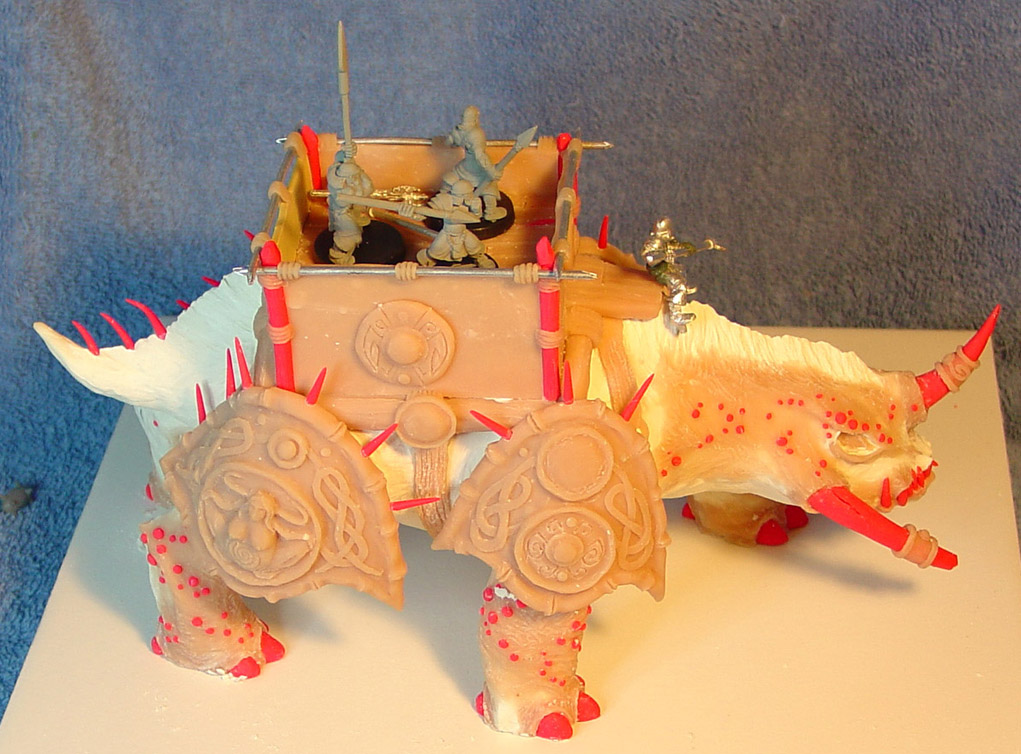 This was long before I knew about Apoxy Sculpt.  If I were to try this again, I would definitely use the non baking material. :-)  For those of you who are newer to the blog, you can see some of my sculpted monsters in my Lizardman and Tomb King armies.  Use the search function on the left hand column to find those, or look through the Lizardman/Tomb Kings threads.

I have some more close up shots of this mastodon that are coming tomorrow.  You will get a better glimpse at the howdah, and the armor.  The figures on the howdah are Celtos figures, some of which were modified to work with the howdah, such as the driver. 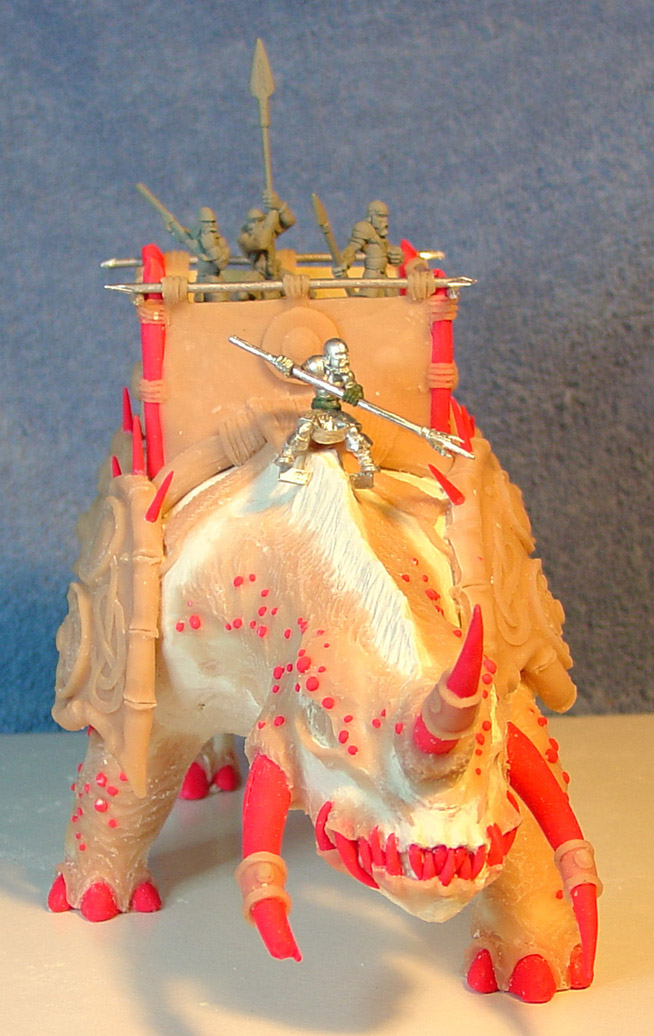 Posted by wappellious at 4:22 AM 4 comments: