Yay for the red team! 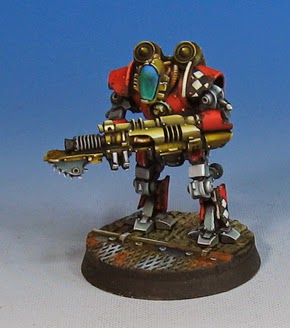 Well... one of the red teams at least.

C-Red Nation has to wait another game, but at least the Blackhawks are advancing!  The series could certainly gone the other way, but I am very glad to have the possibility of coming home from Reapercon to the final stages of that series.

It won't be too easy to keep tabs on it out in Texas, but I will do what I can!

In the meantime, the final Thallax before a set of Three Amigoes shots. 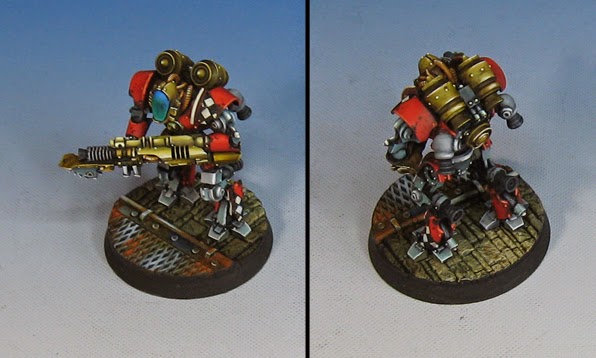 Posted by wappellious at 11:46 PM No comments:

A touch of makeup on the dead... 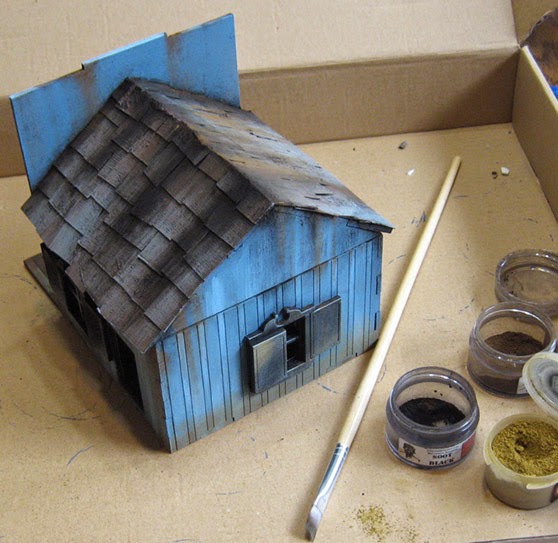 As the final wall got it's demon wallpaper, it was time to think about the exterior walls. 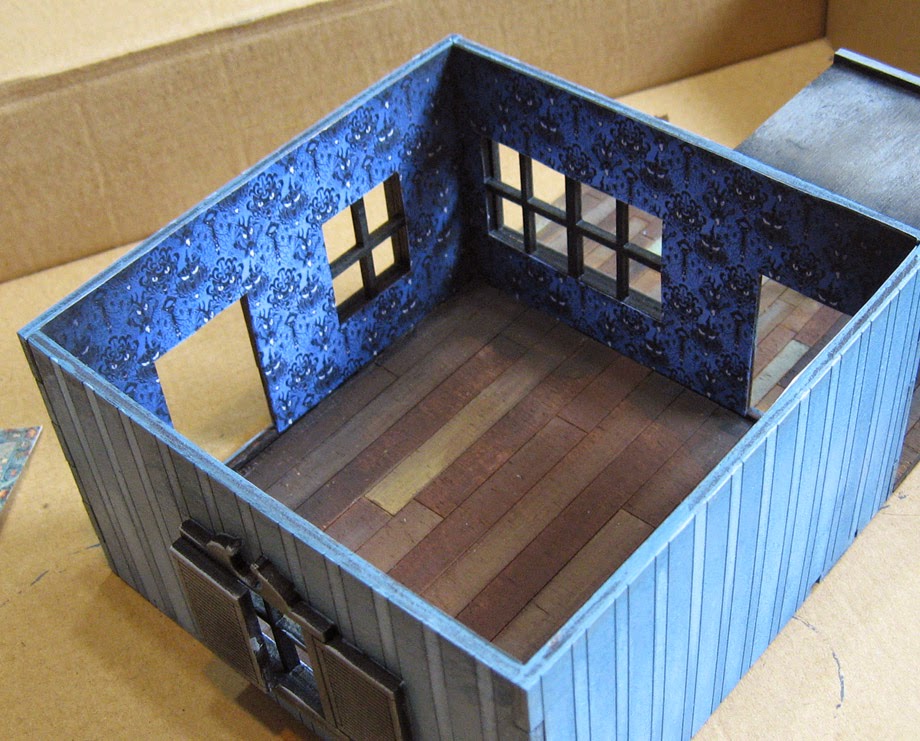 I brought out a few weathering powders... some earth tones and a black.  Most of these were from Secret Weapon miniatures, which has a fantastic range to choose between. 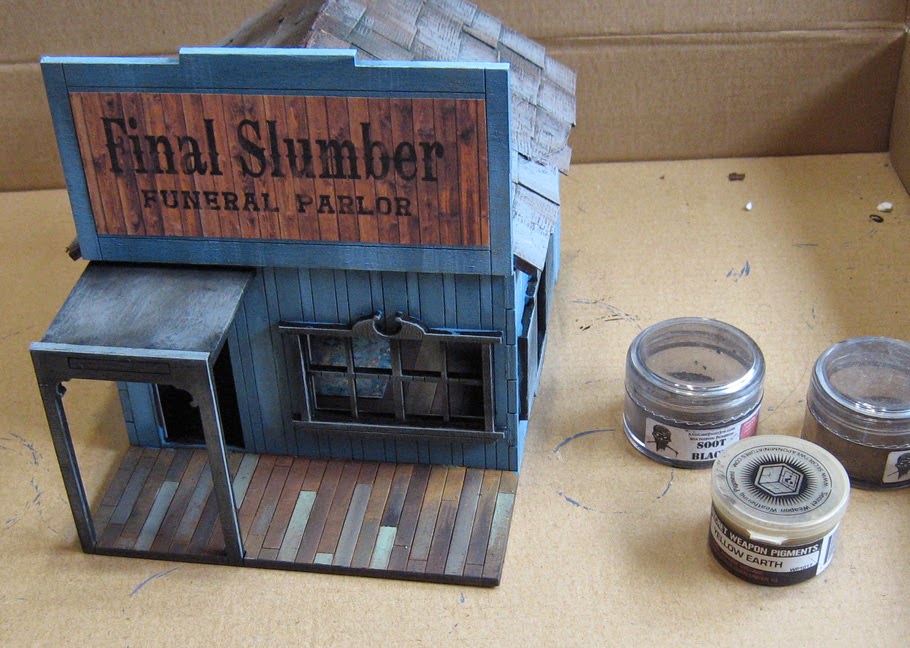 Along the front entrance and the lower parts of the walls, I focused on a darker brown earth color, with a more sandy tone mixed in.

I "scumbled" those colors together right on the wall, mixing them together with the bristles of the filbert brush. 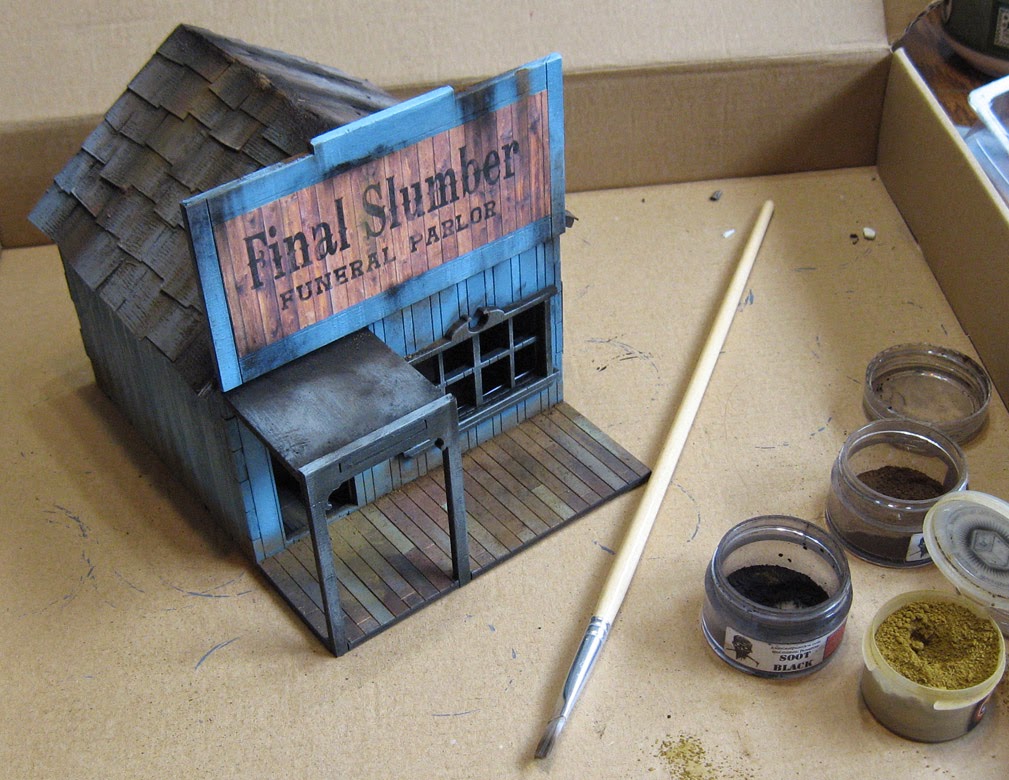 In this image, you can see that the roof was hit with a mixture of the black and reddish brown.

I continued that color mix in the form of streaks from the roof.

A new trick I discovered was to use a can of compressed air (normally for cleaning computers of dust) to sculpt the powders.  I found that I could move them around a bit, and remove excess where needed.

Wearing a mask of some kind when you do this would be a good idea. 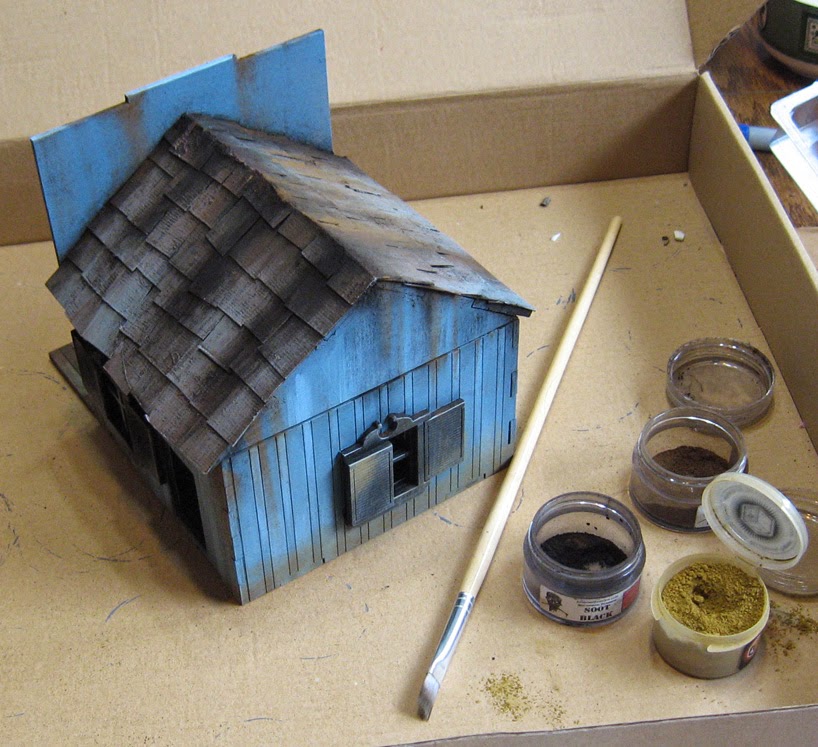 Since the proprietor of this establishment is a very prominent politician, you see his portrait on the wall.  You will hear much more about him in future episodes, especially when my Union posse hits the field. 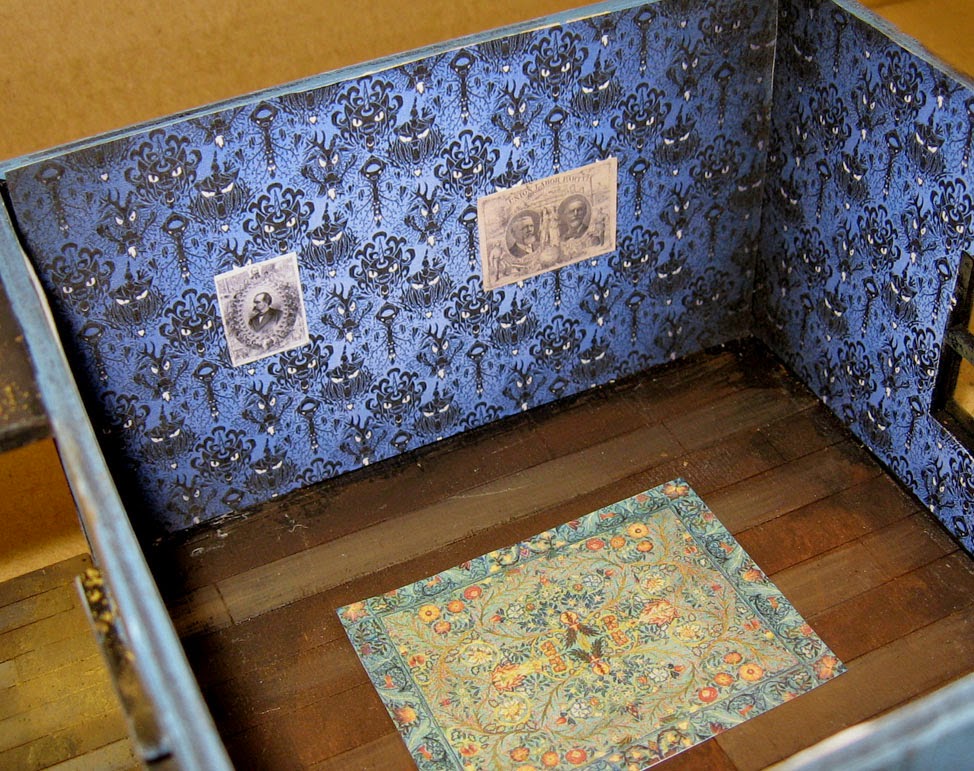 The posters on the outside walls definitely need their weathering effects. 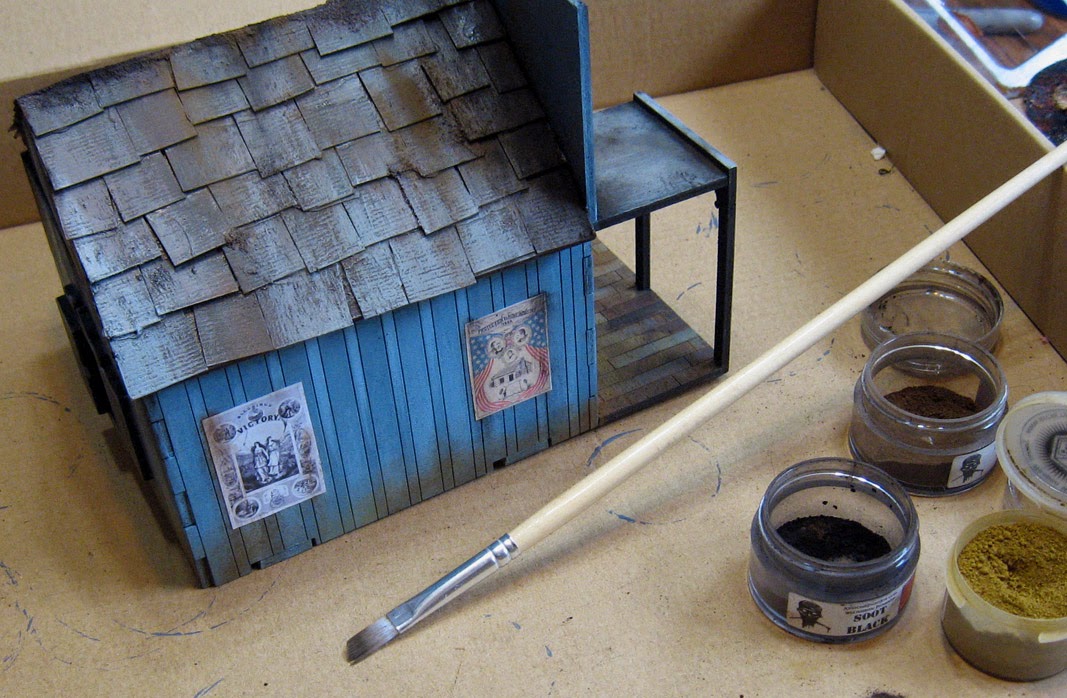 I thought I would put a rug on the floor.  In the future, a casket set up and some flowers will go inside to complete the building's interior space. 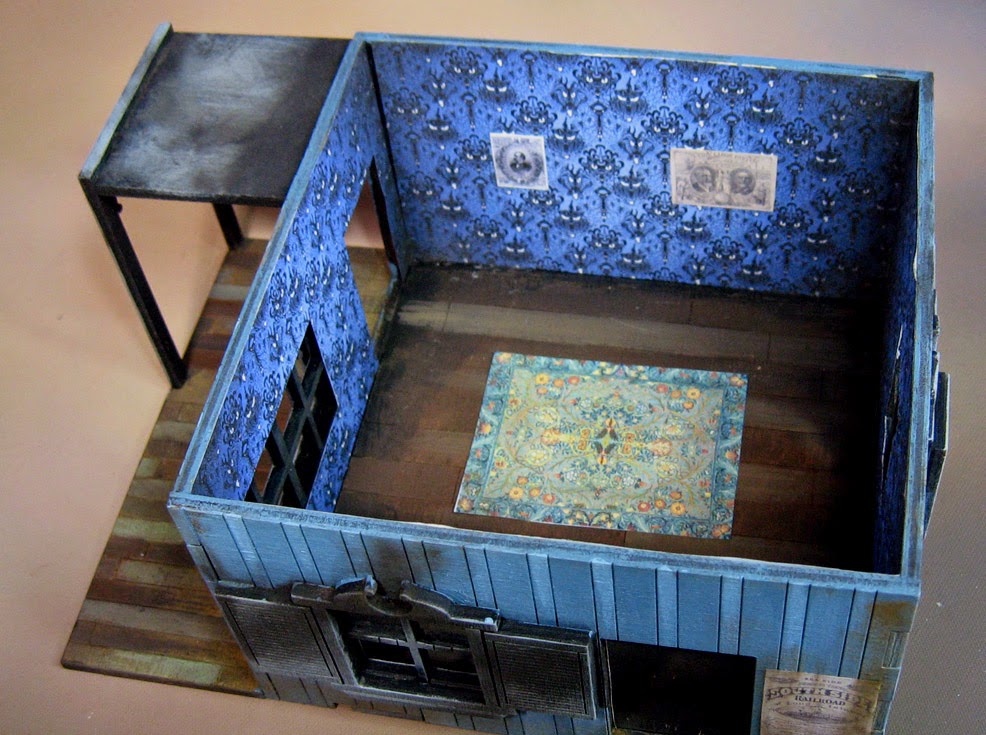 A few exterior shots after posters and powders were applied. 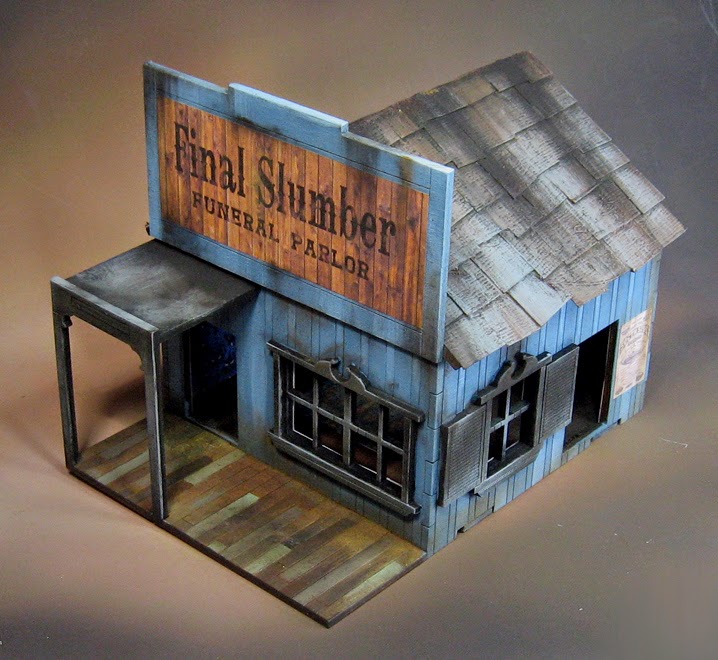 I will do a set of completed images of this building that has some miniatures around it and inside!

So, there you have the Undertaker's building from Burn In Designs!!! 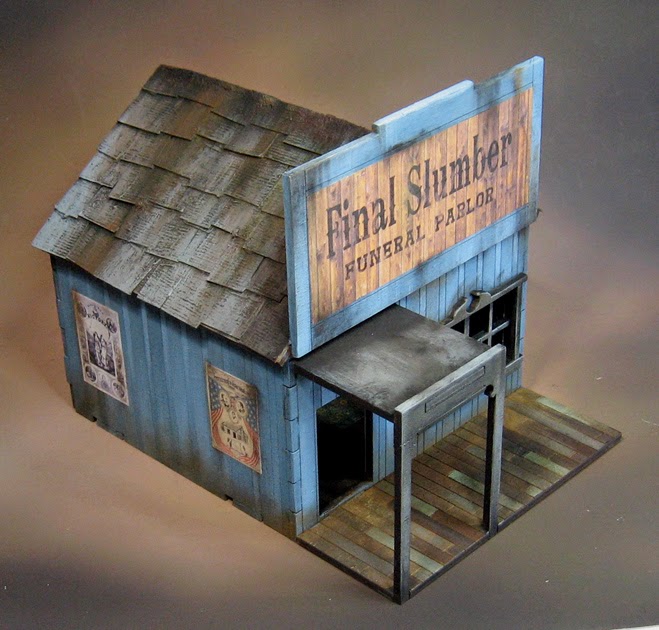 And that makes seven 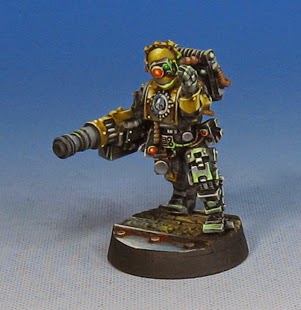 Seven of ten Thralls.  Not long to go before some group shots!

As you can see, I have been incorporating lots of green with these guys, especially in the metals.

I mixed that in with the colors on the artificial leg, and on the helmet, etc.