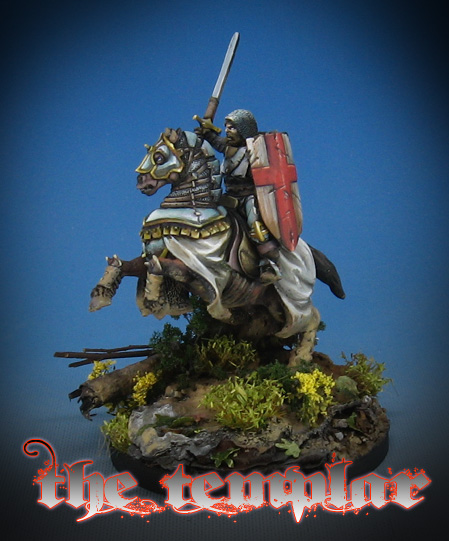 I had some fun with this Templar Knight.  This was one of the first complex mounted figures that I used an airbrush for the shaded basecoat phase.

This meant that I could paint the whole thing more or less intact and fully assembled, which was more handy than I thought!  Usually there is the nasty ritual of trying to glue a fully painted rider onto a fully painted horse, which never seems to fit correctly, even when you have dry fit it a hundred times!

Then you end up making one of those green stuff 'saddles' to make sure the guy doesn't fall off, and you have to hope that you don't get glue and green stuff in places that you painted.

Better yet, you now have to get a brush with paint into areas that were never supposed to be exposed in the first place!

In any case, it also made it easier to keep the same flow of light and shadow having the figure on the horse the entire time,  There have been far too many times where I have painted shading or something elaborate in an area where it will never be seen, or where it does not make sense entirely once he is back on the horse.

As usual, I was working with a basic Badger Patriot 105, and using the Stynlrez primers.  All I am trying to do is get that preliminary shading, figuring out in advance (while priming at the same time!) so that I can get right into the final shading and mid tone work.