The Lion Rolls On 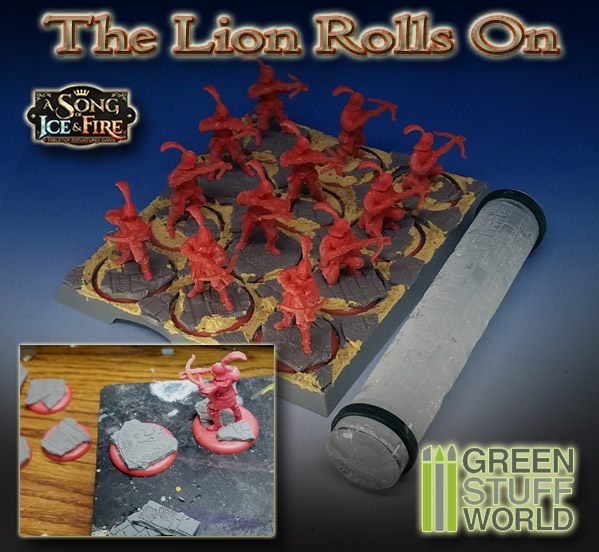 Some of you might be familiar with my previous Warhammer armies like the Lizards and Tomb Kings, which had movement trays with ruined marble of various designs.  Here's a link to those older armies:  https://wappellious.blogspot.com/2012/05/skirmishing-movement-trays-for-skinks_28.html 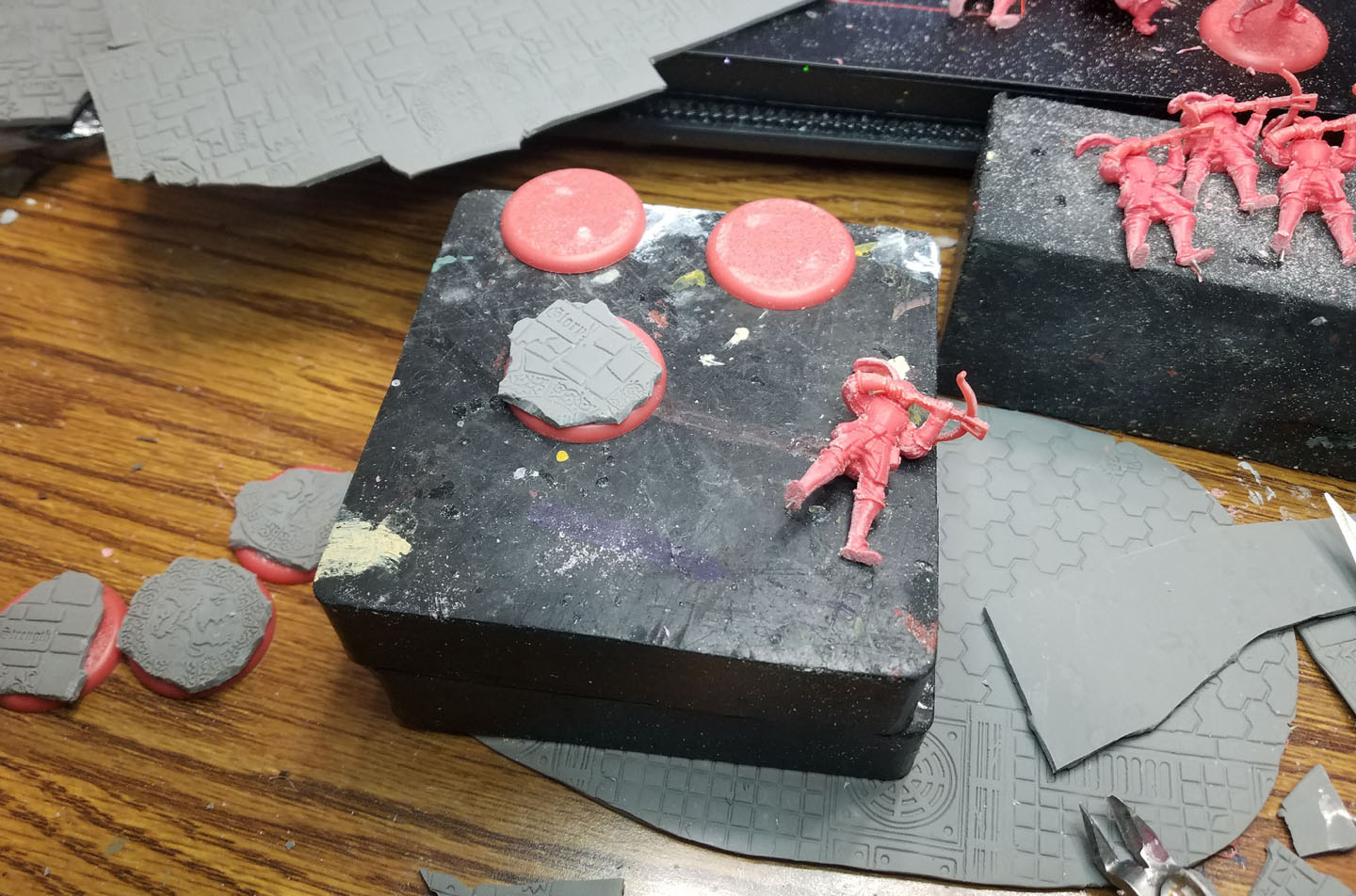 Those movement trays were relatively plain compared to the Tomb Kings:  https://wappellious.blogspot.com/2013/04/more-views-of-chariots.html

Instead of having to carve in all the texture by hand, the Green Stuff Word texture rollers make creating all those amazing designs as easy as rolling the pins over some Sculpey clay!  I have a number of articles on how to do that process... here I wanted to show the new Song of Ice and Fire figures on their movement trays... 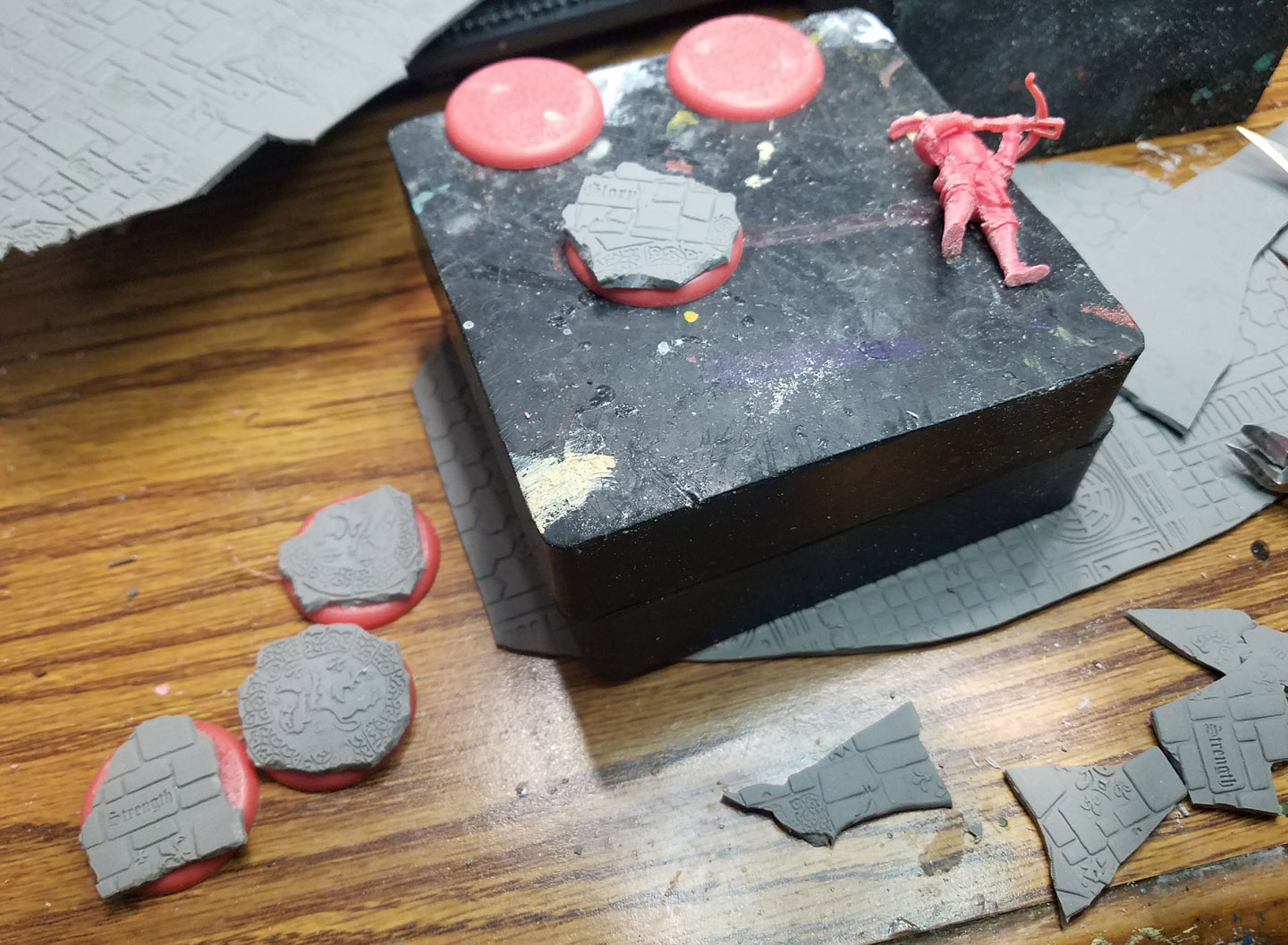 Once the sculpey sheets are broken up into the pieces you need, you can take the pinned figures and attach them to the bases by drilling a small hole the size of your pin (in this case the size of a paperclip).  For the smaller bits of broken sculpey, I can squeeze those in around the feet of the other figures that I did not cut from the original base with my razor saw. 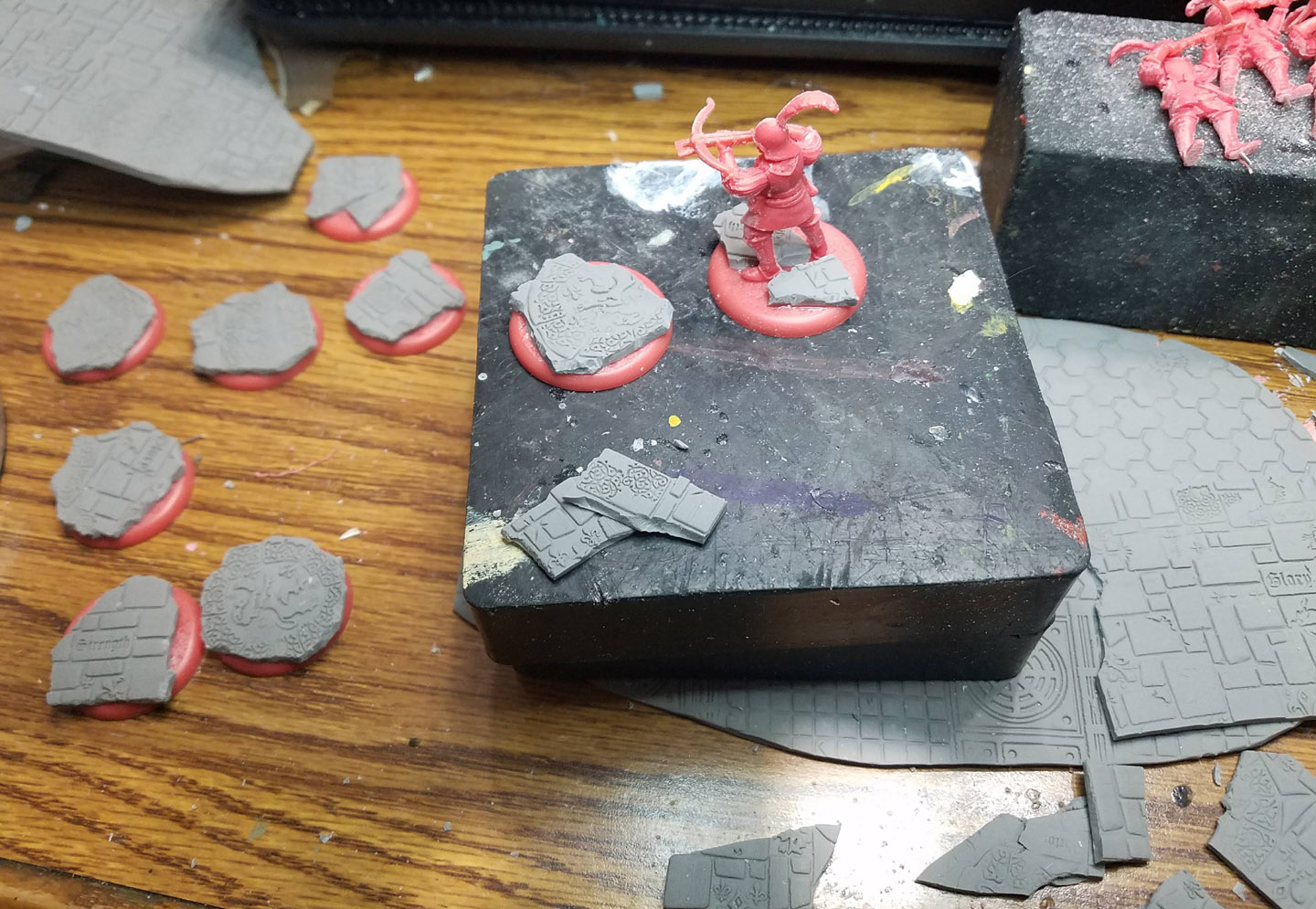 The selected figures and bases are now in place.  You can see the Lion design featured on the bases quite easily!  Each texture roller has a number of great designs on it, so every last inch of it has something you can use.  You might even be able to spot the words "Glory" and Strength" here and there. 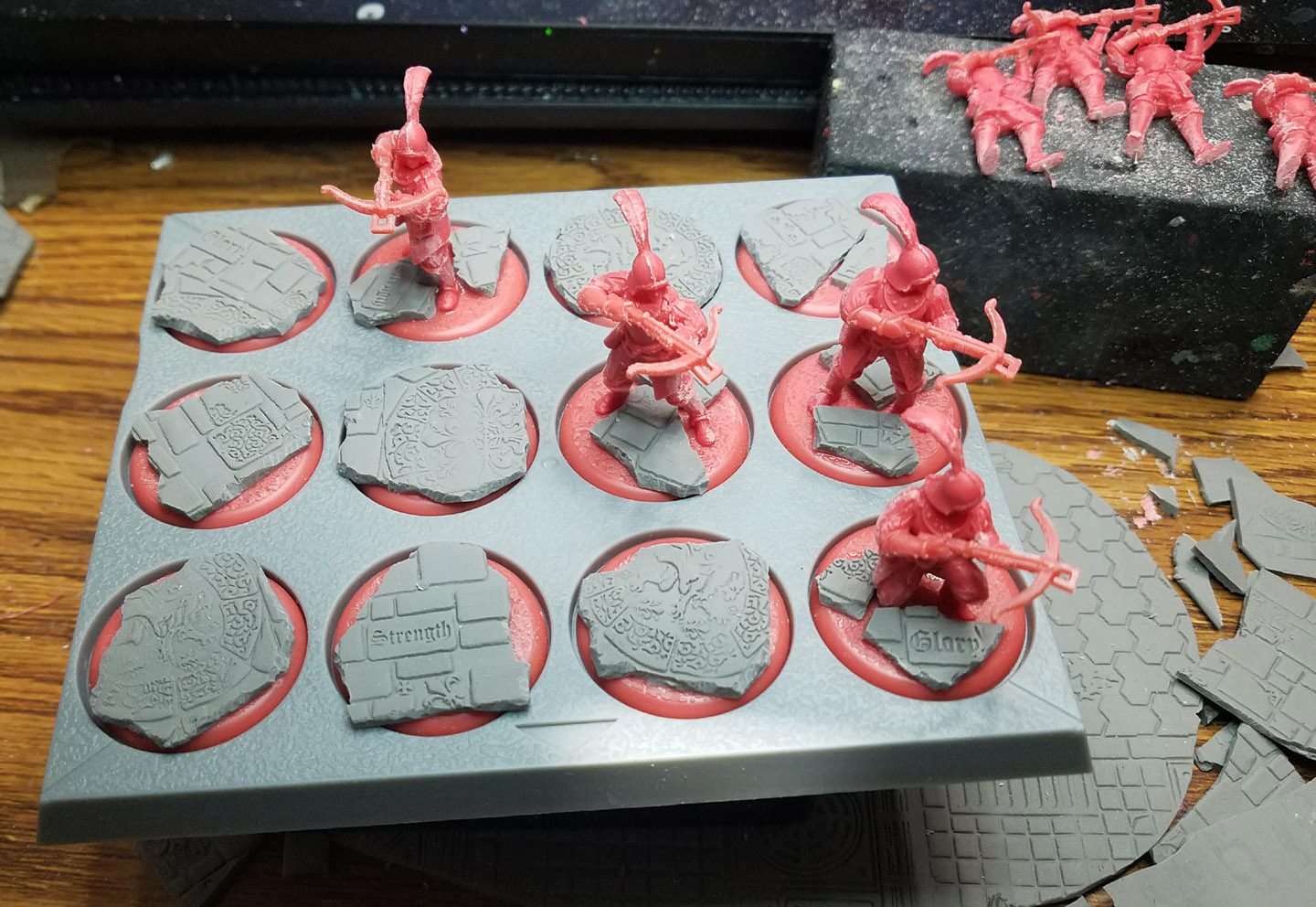 The parts of the sculpey sheets that were broken away to make the base for the figures are perfect for those interior places around the movement tray.  Since they were the parts of the design next to the Lion imagery, it makes sense that they would be right next to them on the tray. 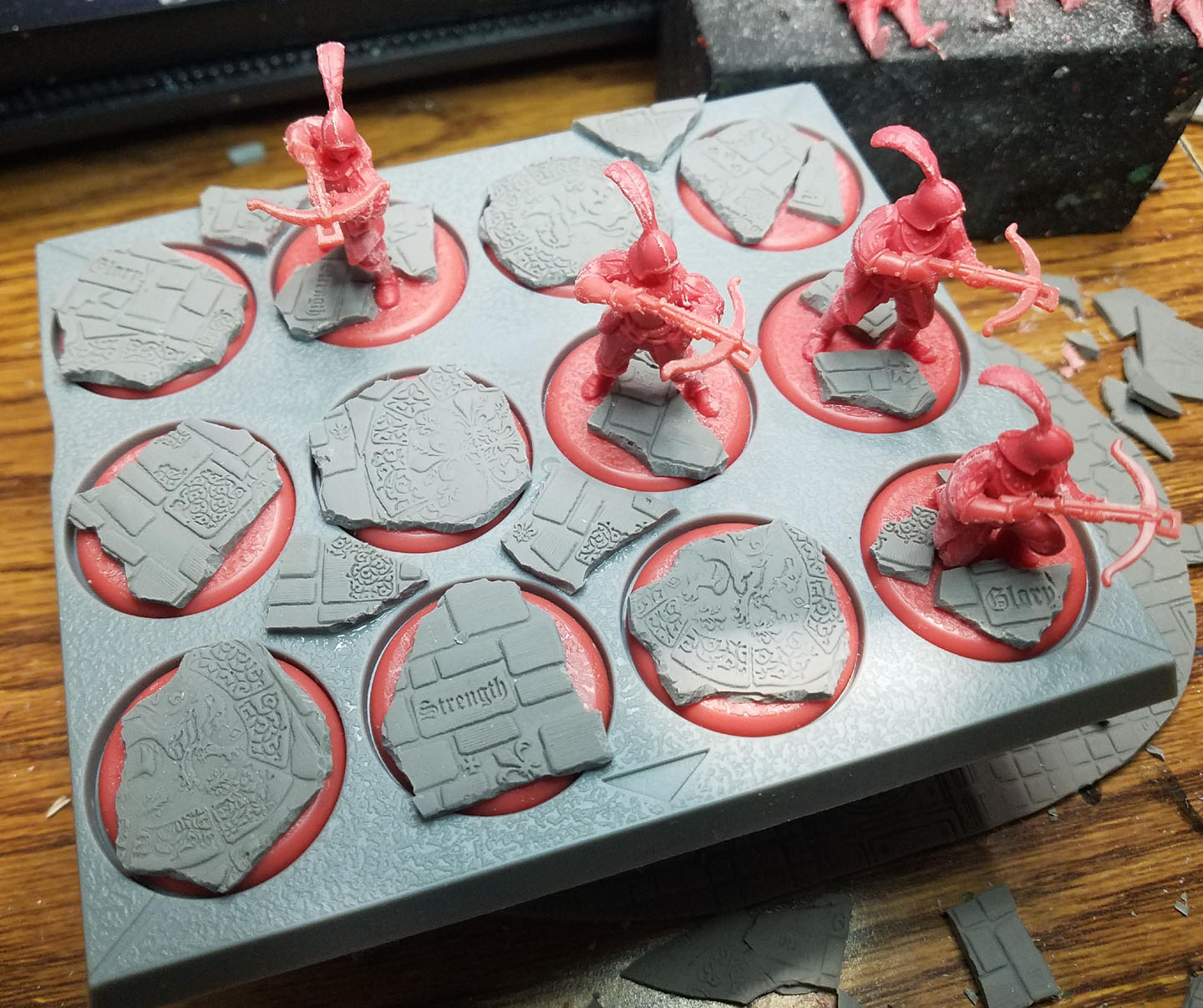 I used some of my sandy paste to fill in the gaps around the sculpey pieces, being very careful not to make the surface too built up.  I wanted to be able to get the bases into their slots easily, and a few had some tiny overhang. 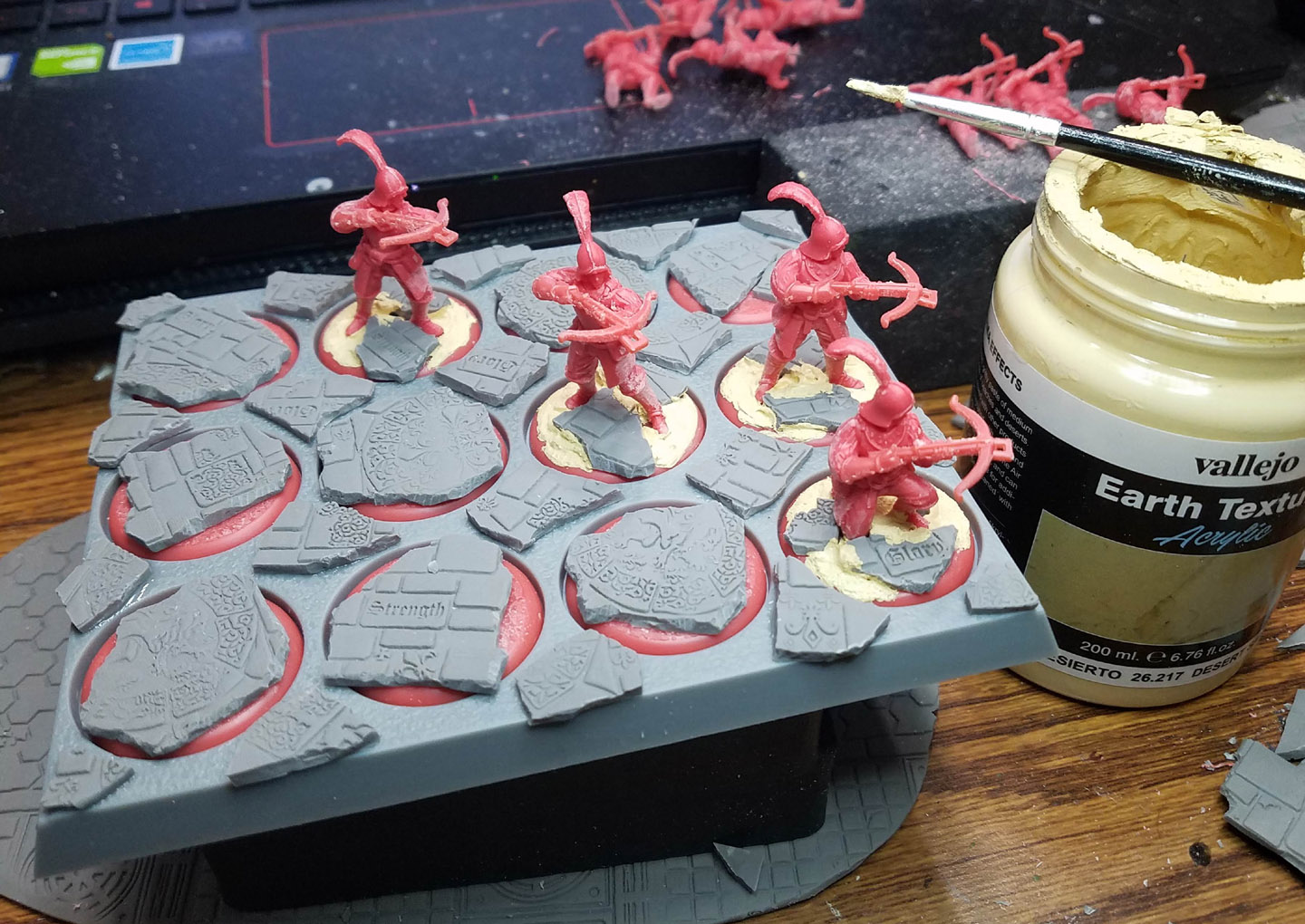 After sprinkling some light gravel and sand into place, I could start drilling the holes for the figures. 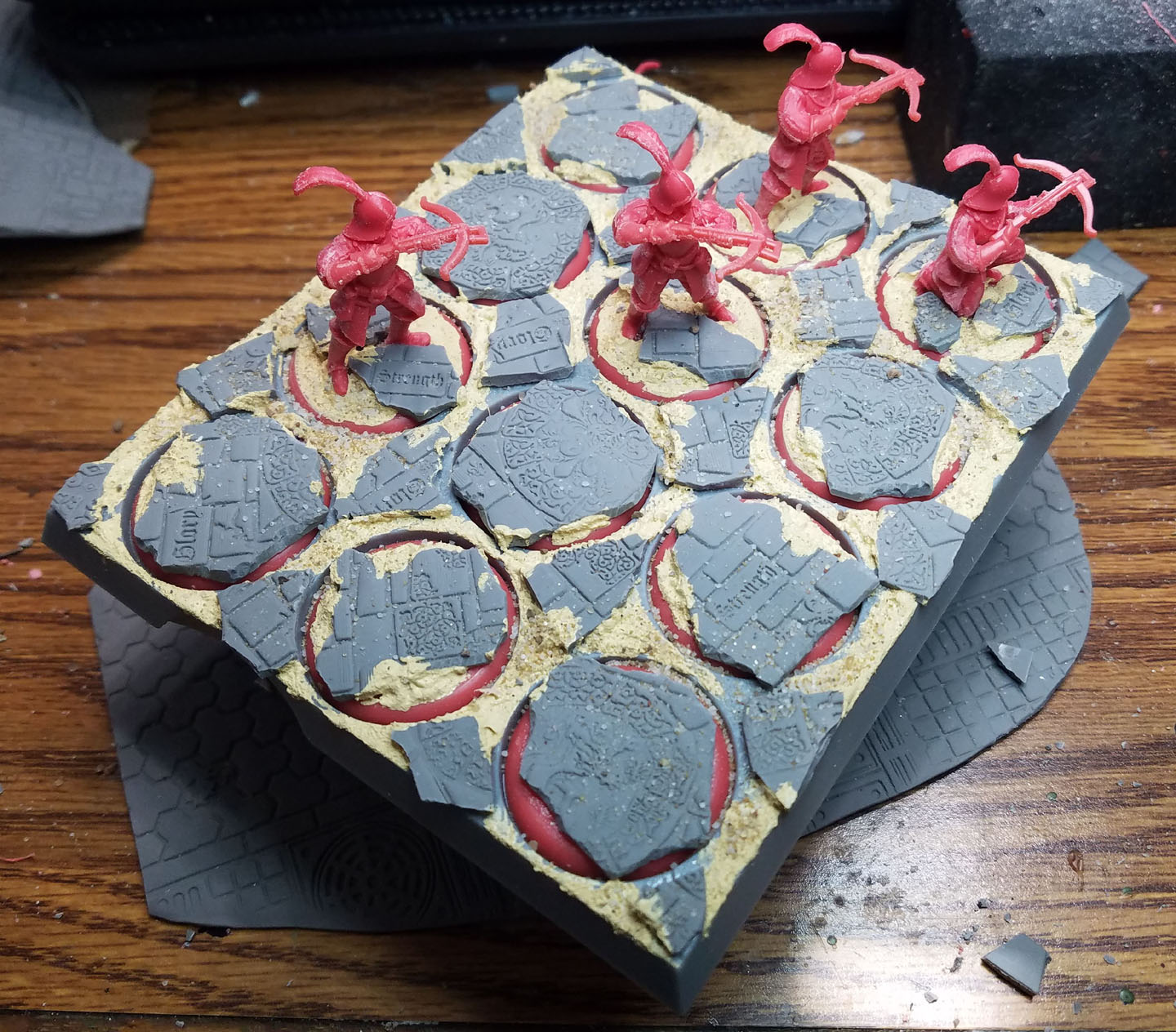 Here you go!  The entire unit ready for priming!  I think this speaks to the Lannisters, having the wealth to make such structures and abandon them for something even more grand. 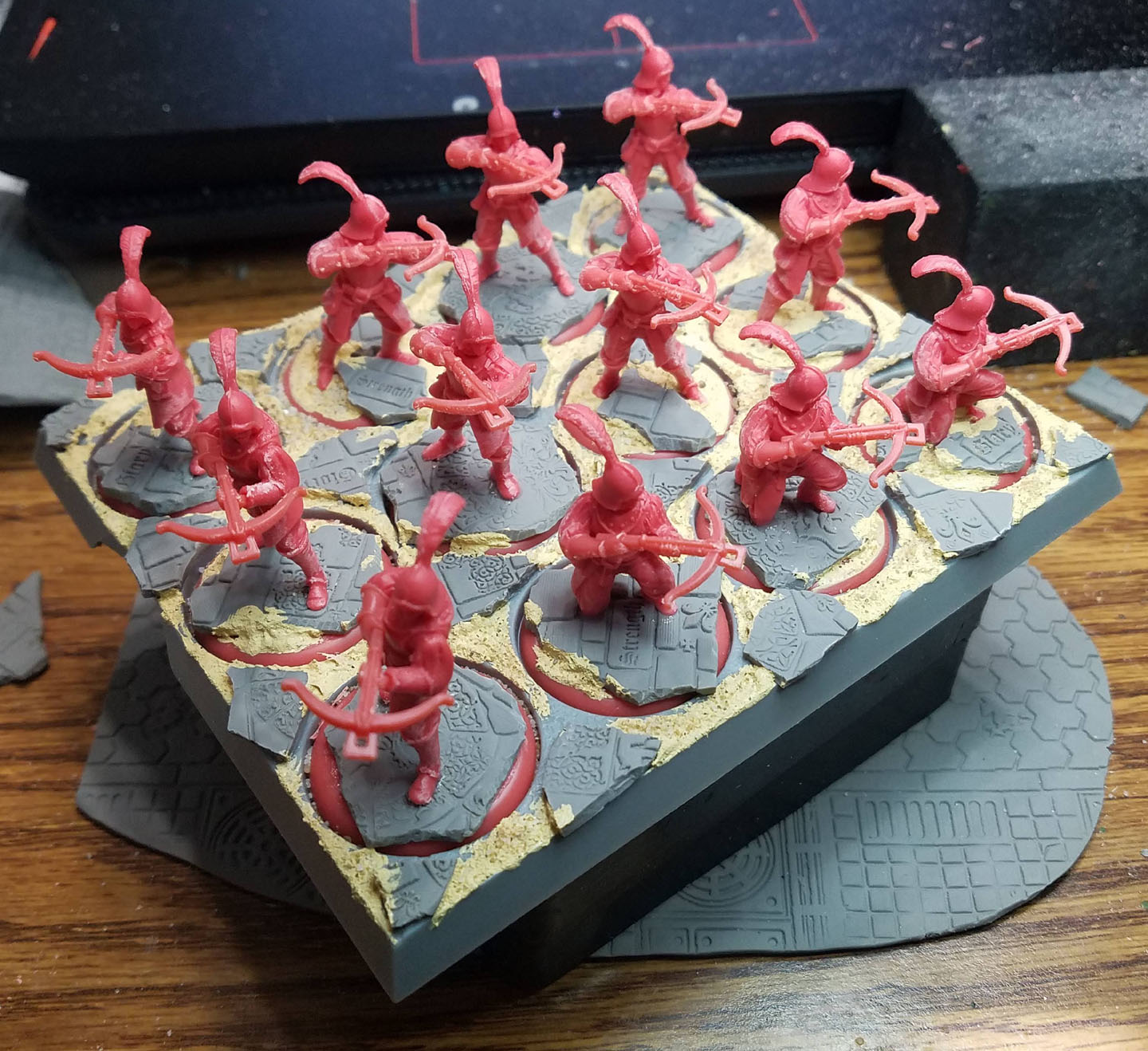 I am doing a tutorial video on this style of multi basing for my Patreon Page.  This will be for the folks who have signed on to the $10 basing pledge, as well as those who are part of the $15 Army Painting pledge level.  Here's a link to the Page:  www.patreon.com/JamesWappel 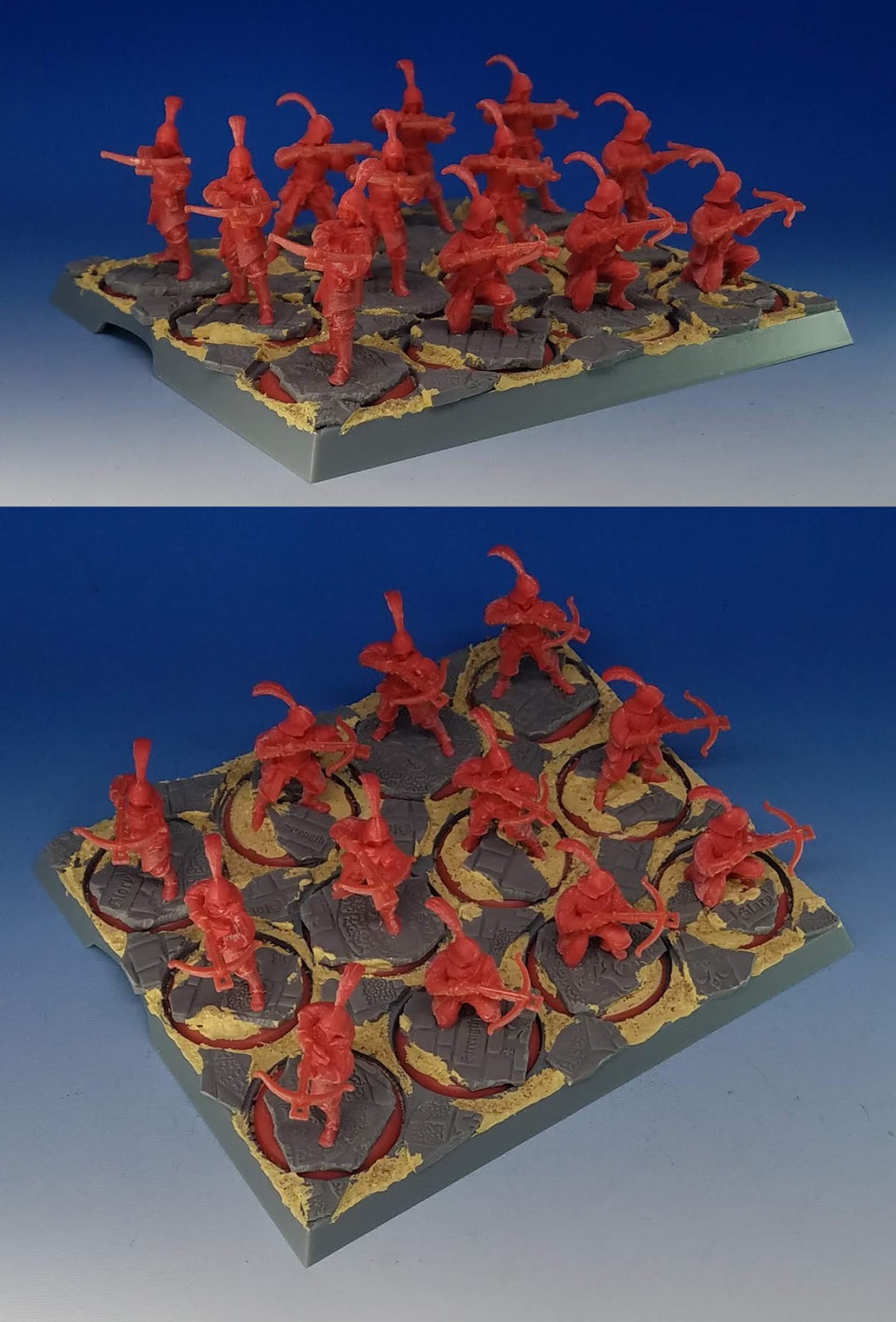 All of these units will be part of my armies at Adepticon, so come out and see them!  Here's a link to the Green Stuff World webstore:  http://www.greenstuffworld.com/en/22-textured-rolling-pins 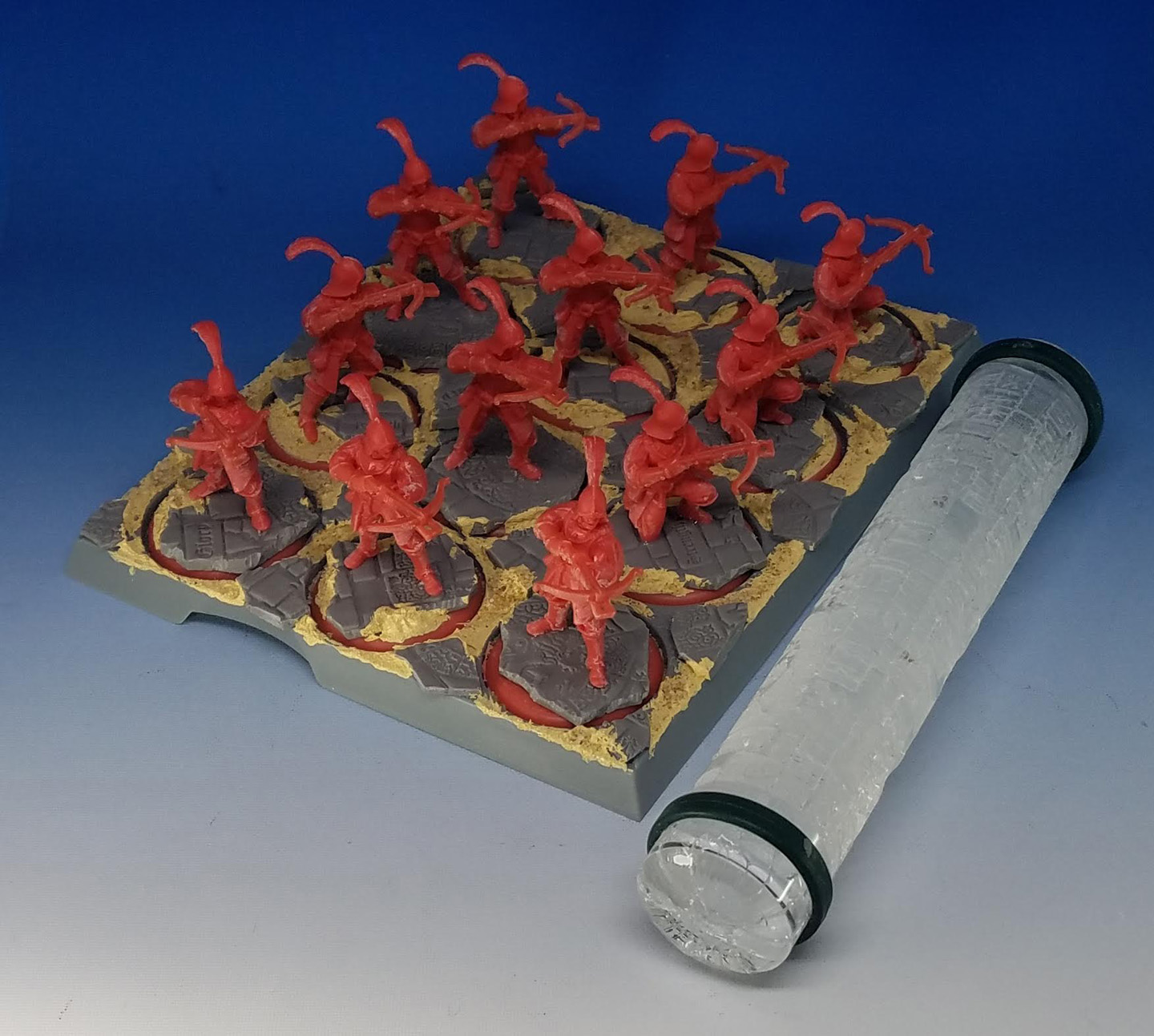