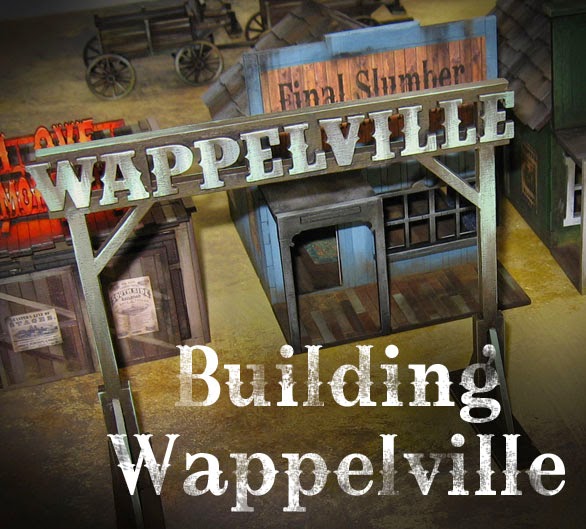 This post will cover a few things.  First, it will show my collection of Burn In Designs buildings that are nearly or completely finished! 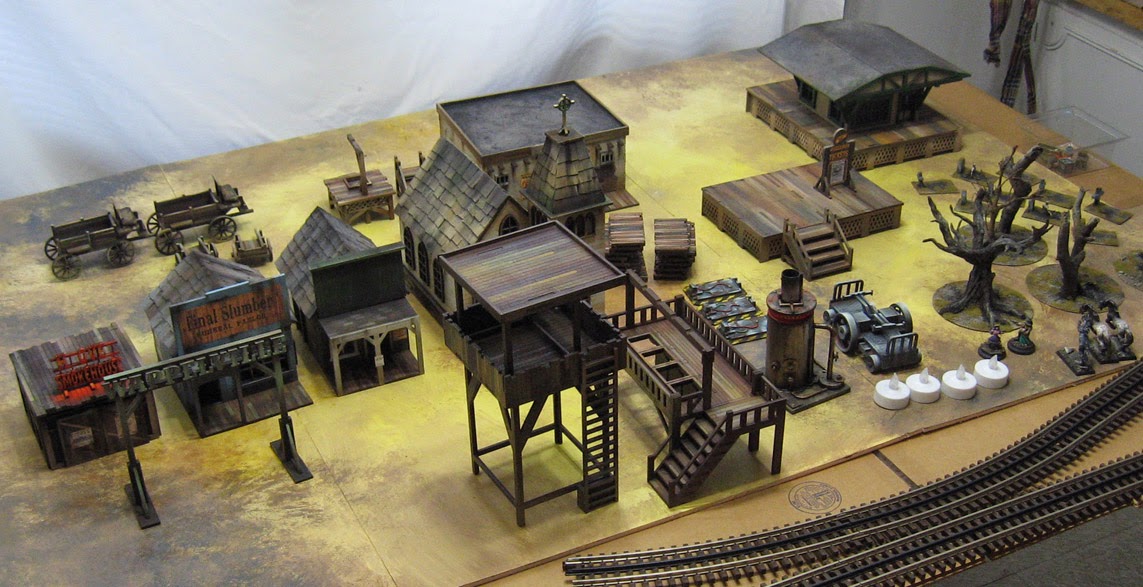 Second, I will talk about my mindset as I place the buildings and lay out the town. 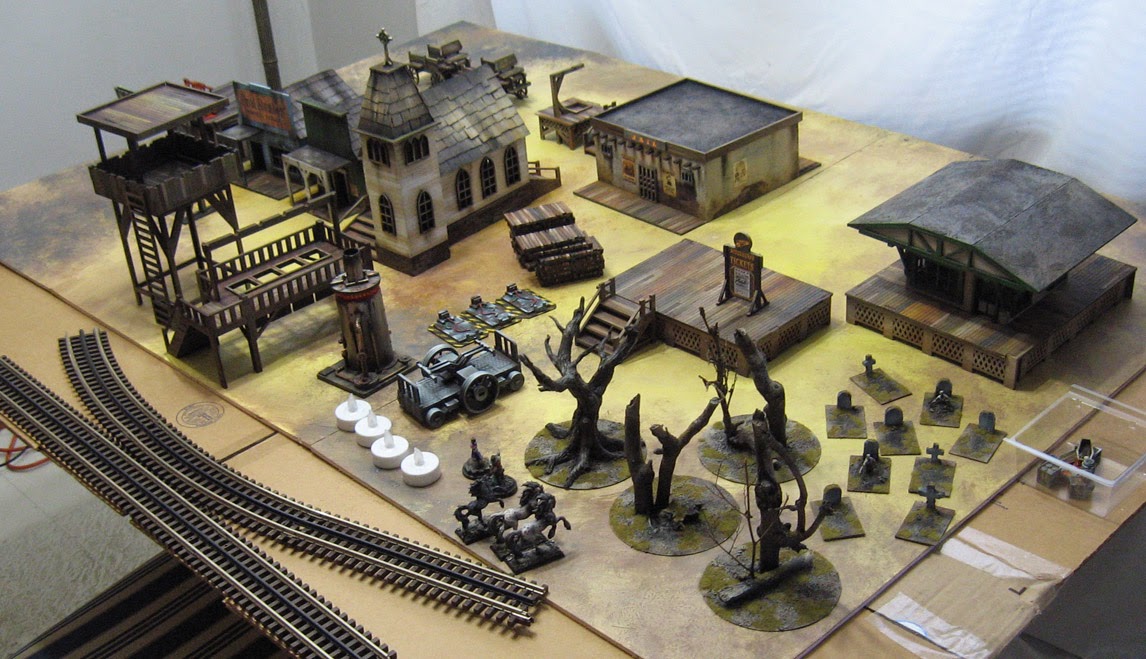 There are also a few pieces of terrain which I have made, such as the RJ-1027 power station, and the charging stations.  There are a number of posts showing how those were made in the Wild West Exodus/terrain building section. 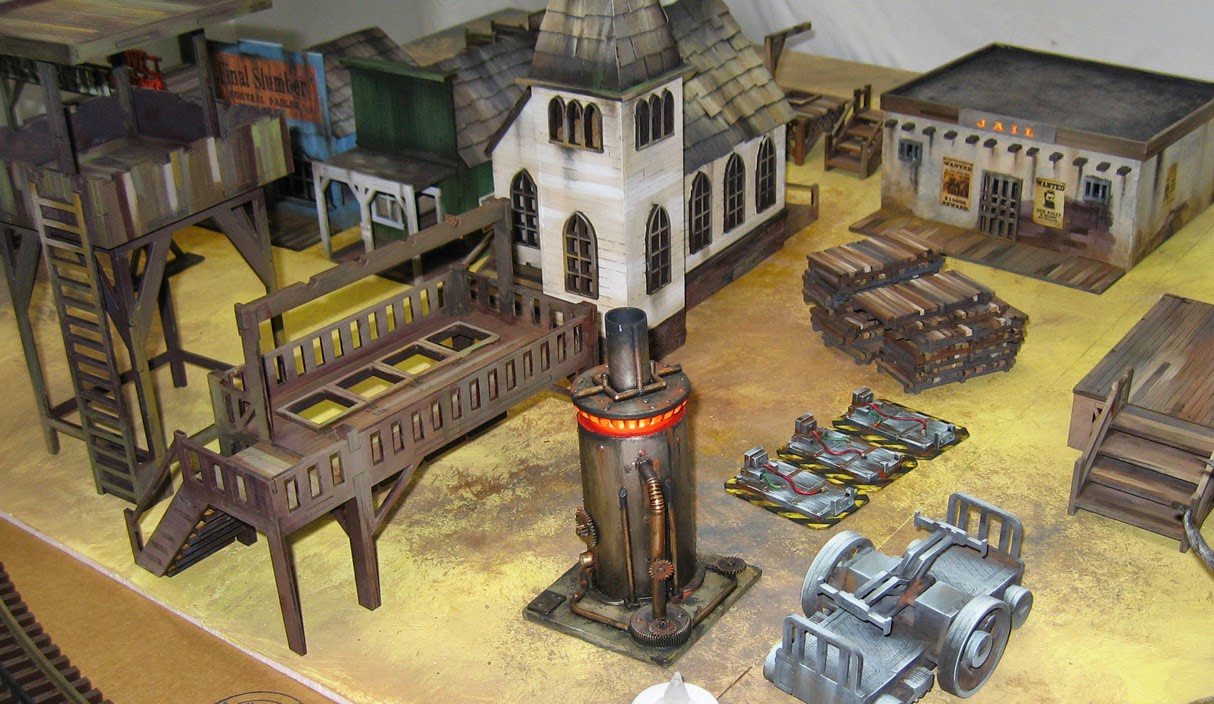 This is what I mean about table building.  I think you can see right away that it is oriented at an angle from what you typically see.  Normally, each 'side' has its own row of structures, leaving a vast no man's land in the middle. 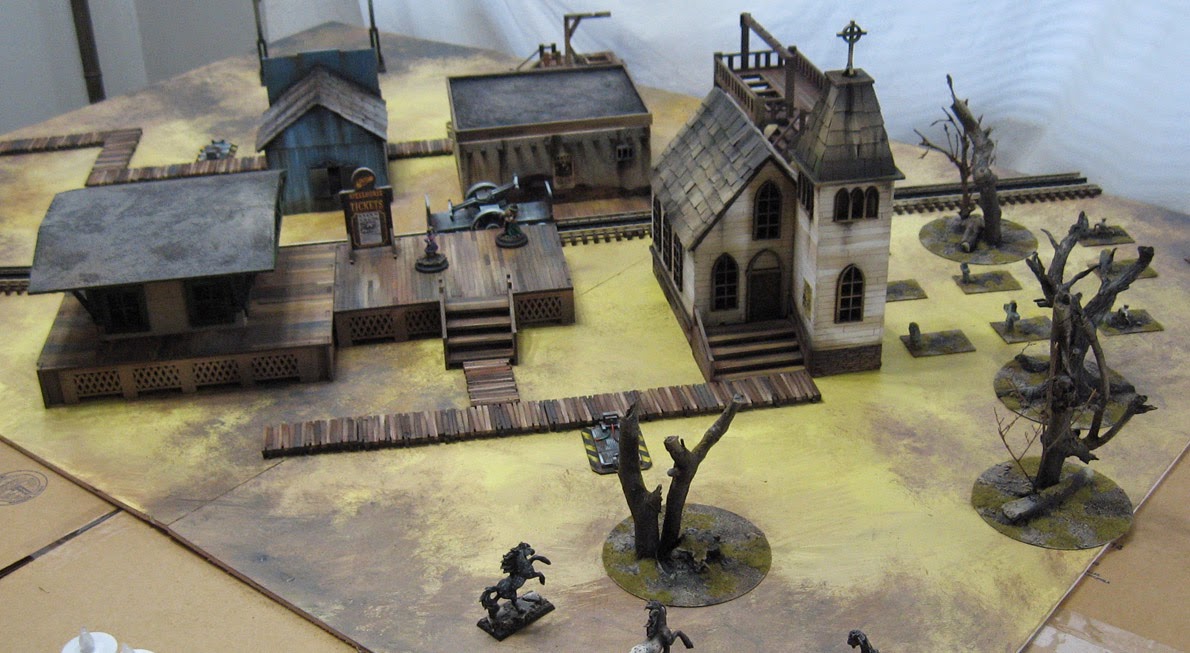 Having everything rotated on the axis like this creates many more opportunities to move in cover, all the way across the board.

Please note that additional buildings are going to be added to the left and right sides.  I just wanted this one to show the Burn in Designs structures.

This view shows that there are still, long, clear avenues, but they are oriented in a completely different direction.  We also created some special rules for the rail pump car in the center.

It can be controlled and operated by two figures, who have to spend action points to move it 7 inches per activation.  Two other figures can 'ride' it.  The rail car proved to be a fantastic opportunity to use simultaneous activation. 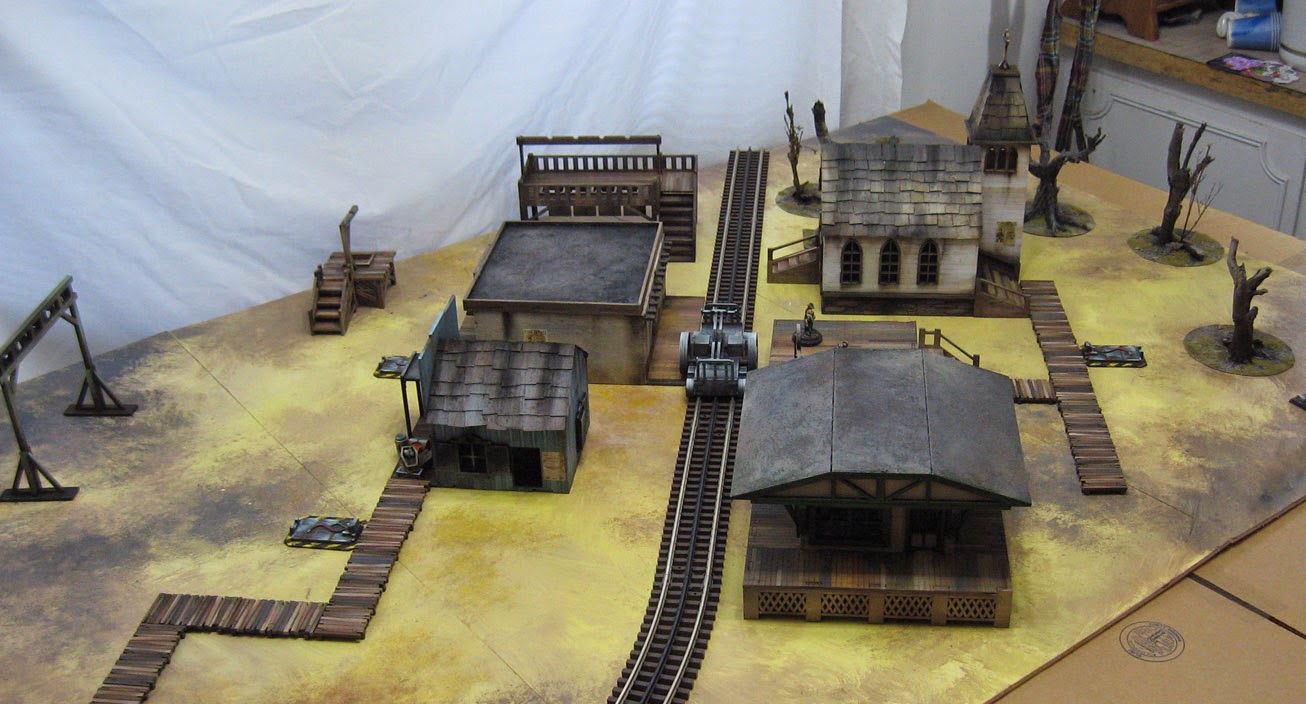 When you see the final photos of the completed table, and the subsequent game that was played, it will show how a table set up in this way can also make the game a little less shooty.

Also, a table set up in this manner allows for more unusual deployment zones. 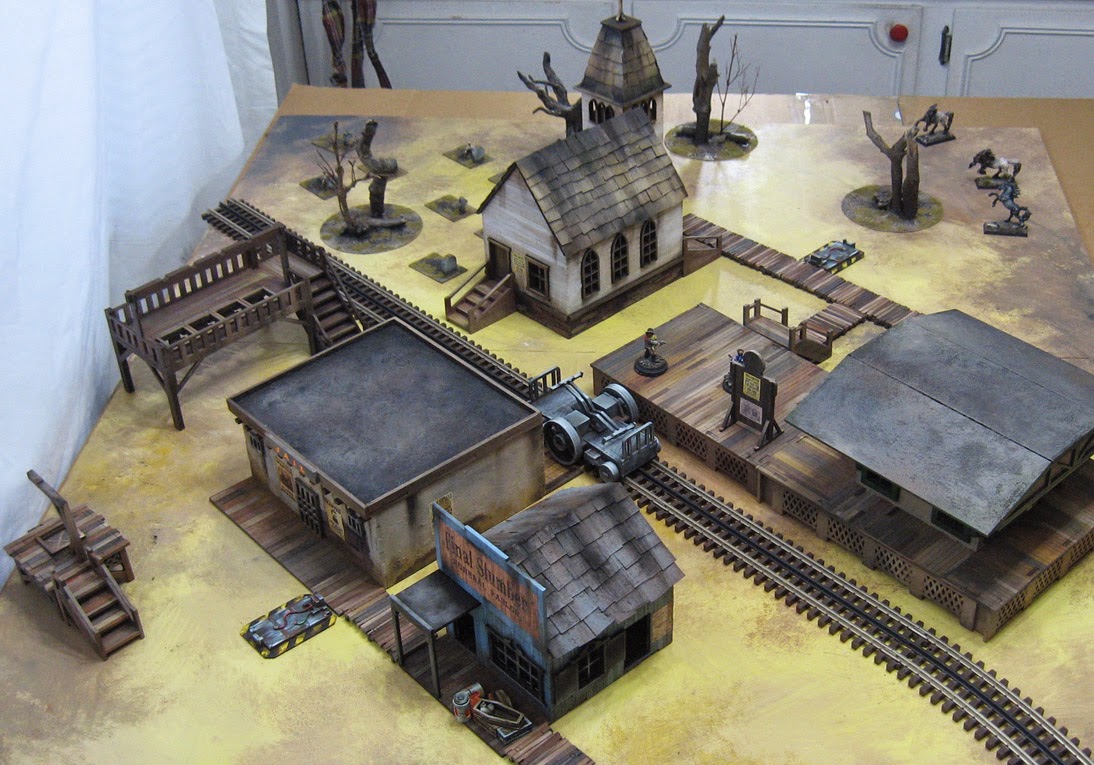 The Undertaker's establishment is going to be a major objective, and you can see that it will not only come under attack right away, it will be under constant attack throughout the game. 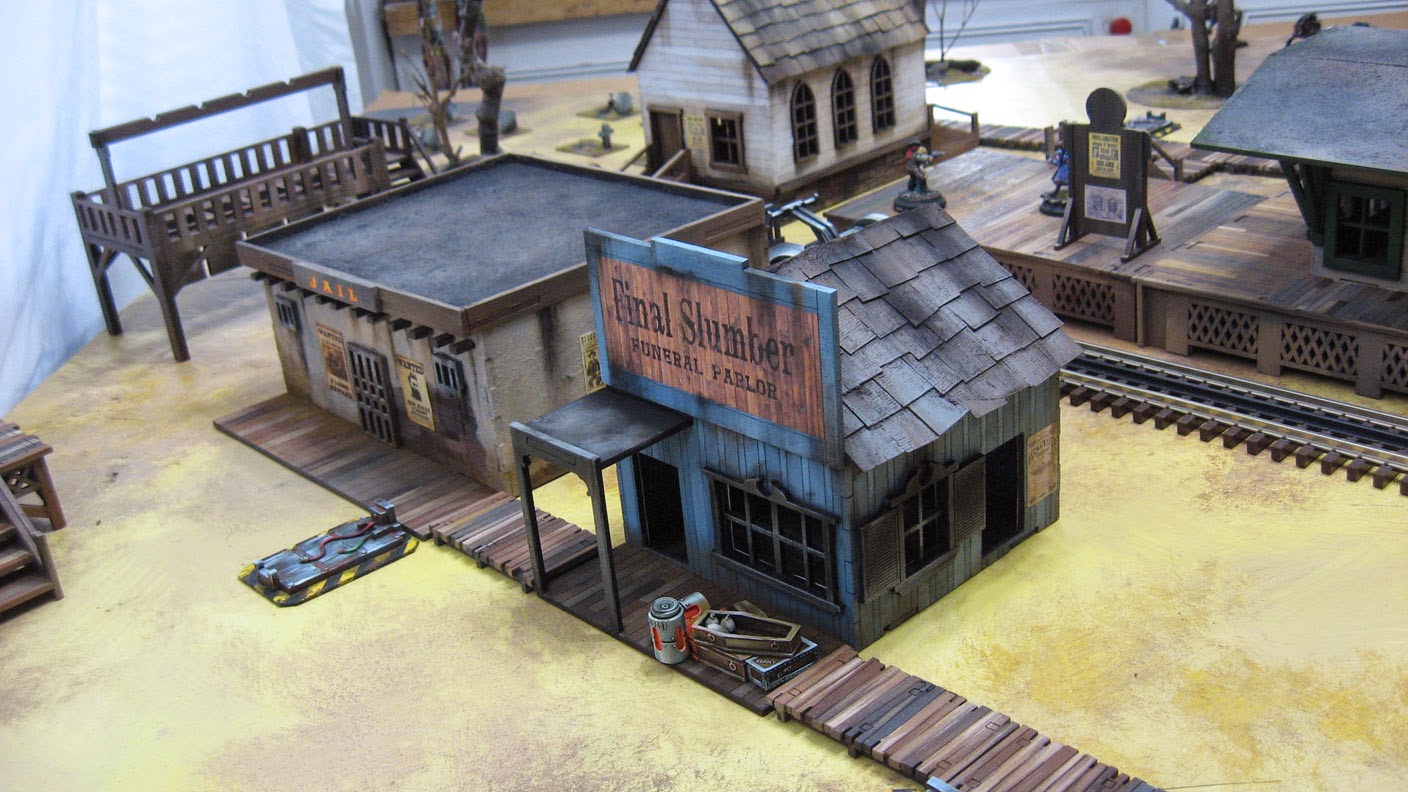 This opening into town will be the primary access for the Enlightened to get into town.  Lathan created a very nice sign to let people know that they are entering the future capitol of the State of Wappellia! 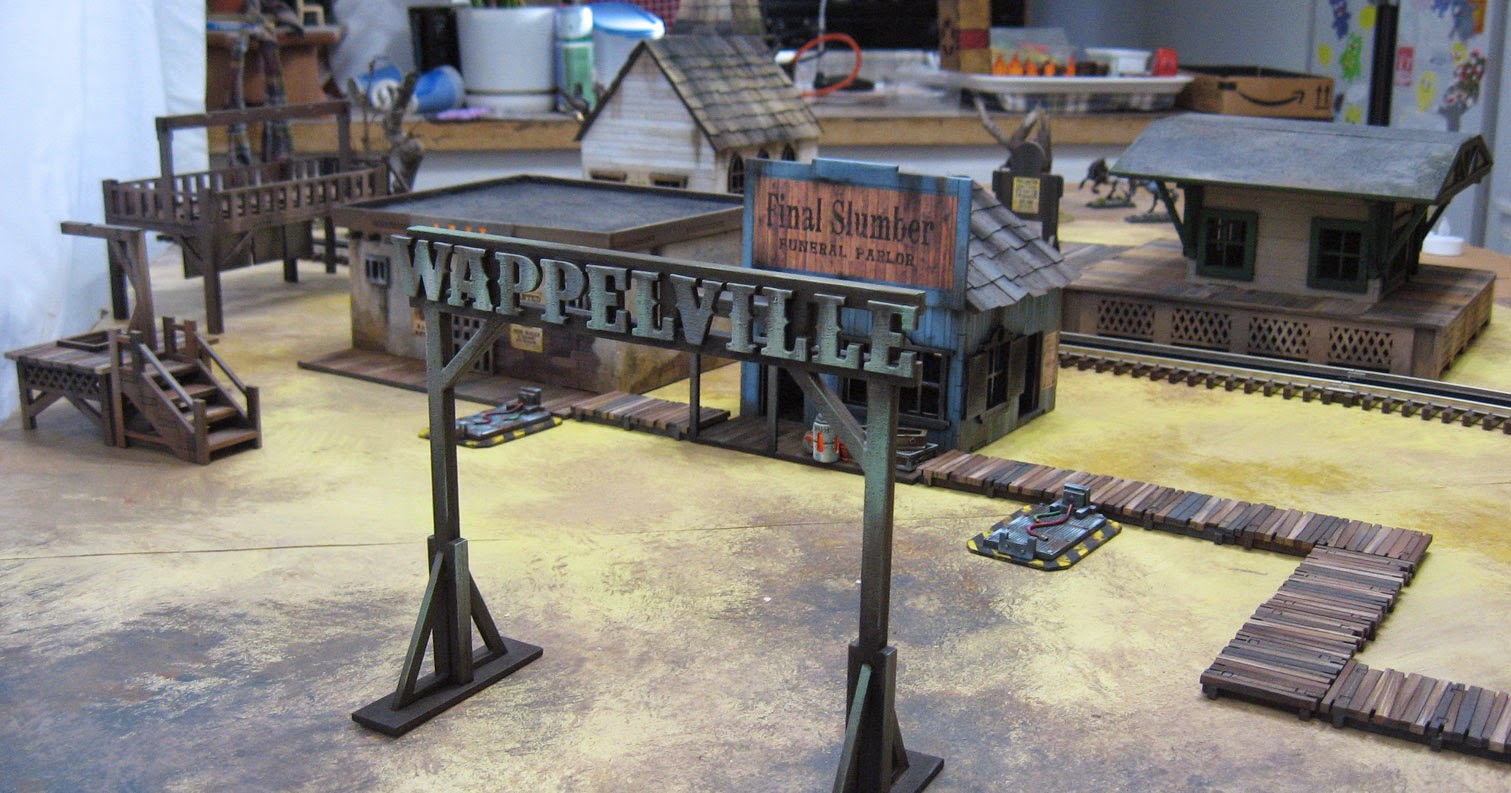 On this end of the board we have the brand new tree stands and graves.  This is another deployment zone for the Enlightened.

Checking out this view, you notice that extended lines of sight are blocked, even from high positions.  That was one of my goals, as I didn't want the game to devolve into a shooting gallery.

We shall see how all this works out in practice as we play out the game!  I have been using an angled layout for the games the last few times around, but this is the most stuff we have had on the table yet.  Stay tuned... 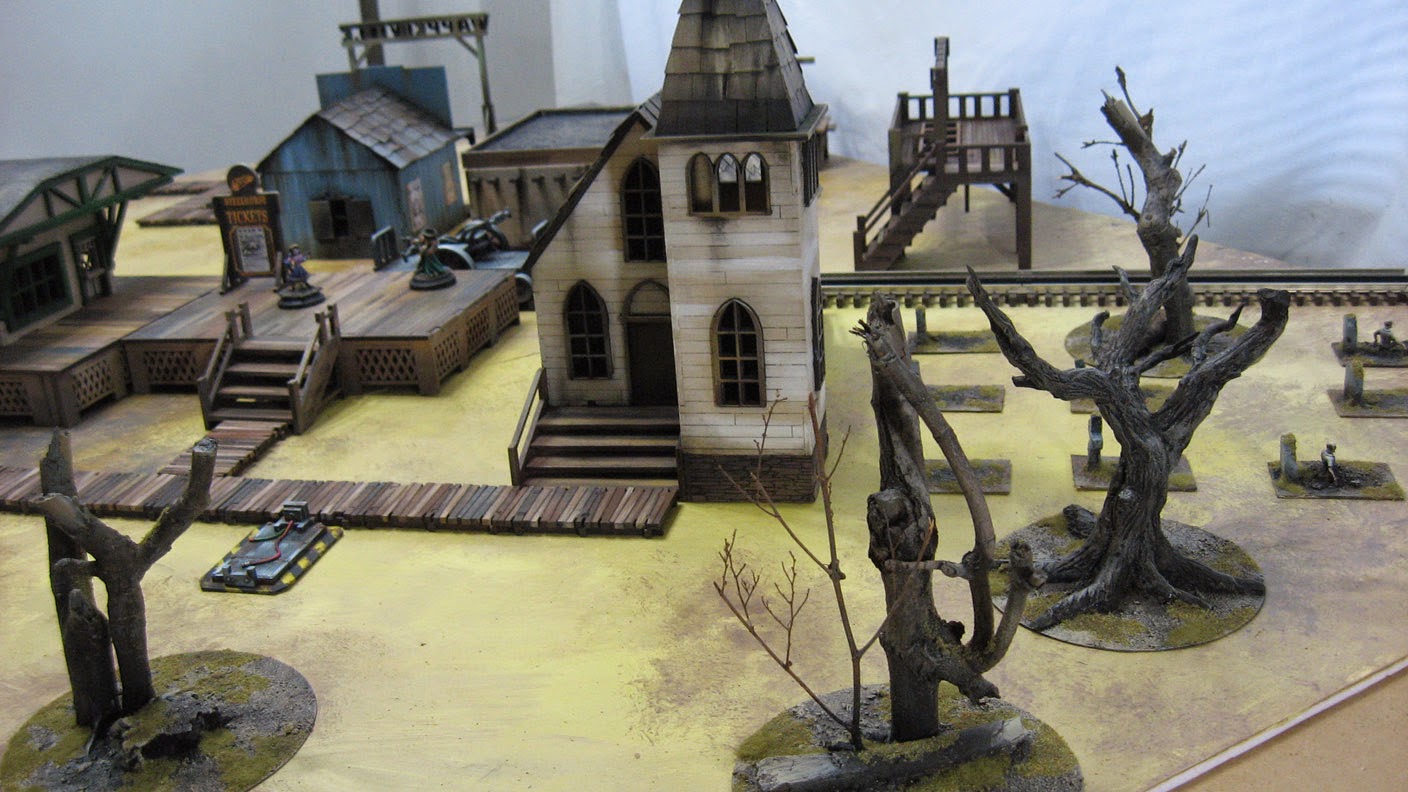 Posted by wappellious at 3:56 AM 4 comments: