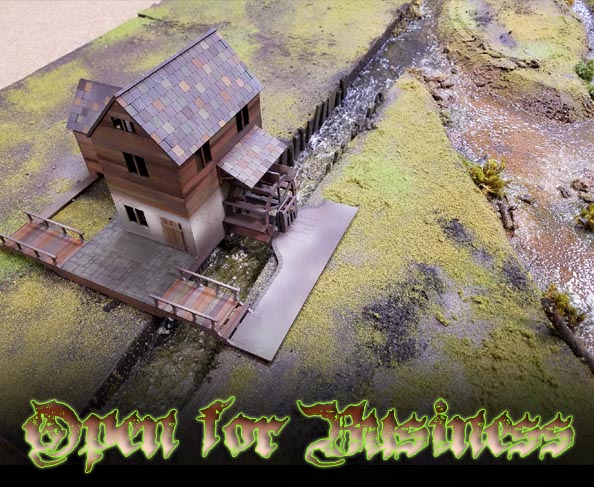 I managed to get a few quick images of the cured water effects, hoping to show how a few rapid applications worked out. 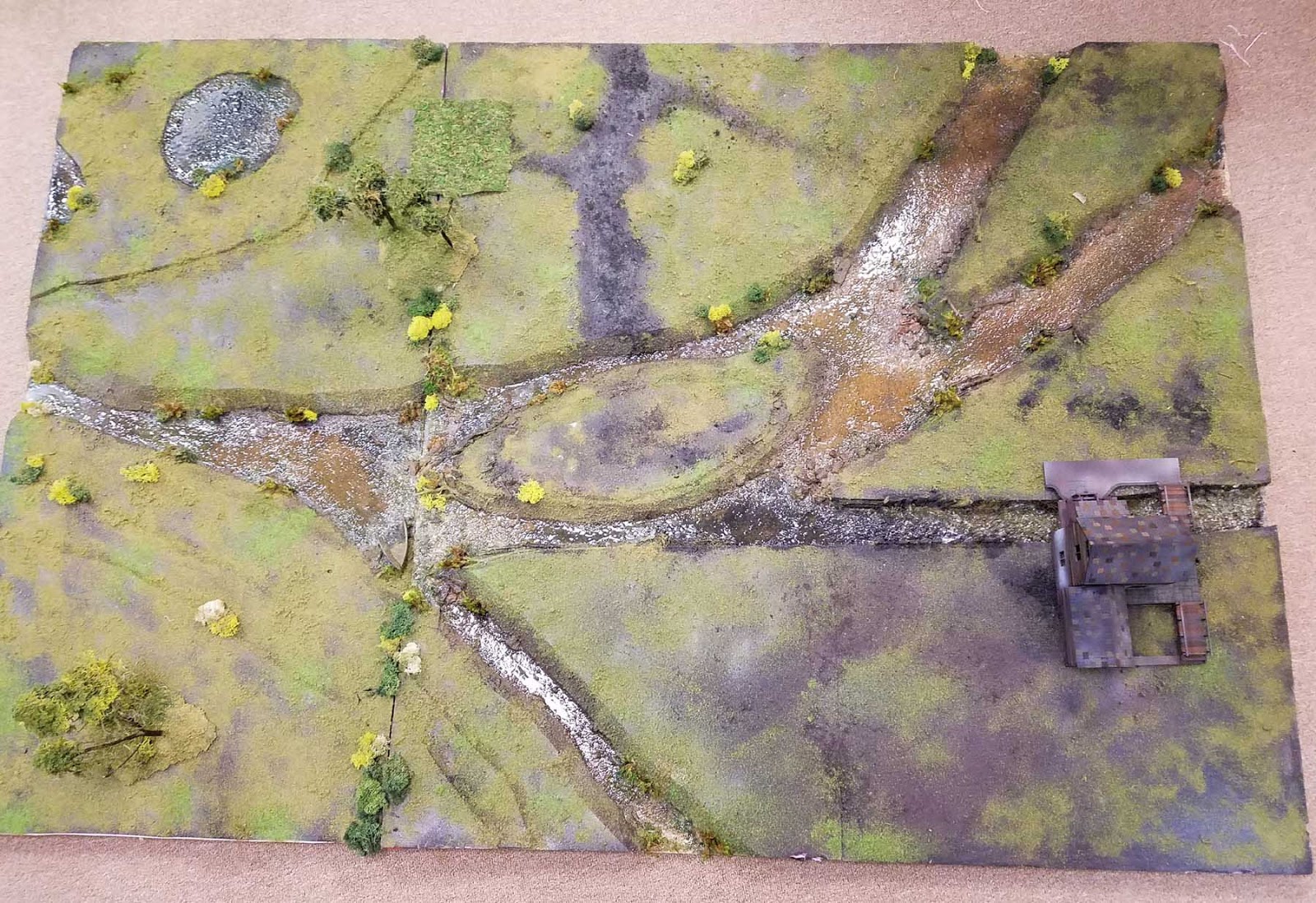 The idea was to make this board as multi purpose as possible, which meant leaving more open spaces for buildings, forests, jungle foliage, gun emplacements, etc. 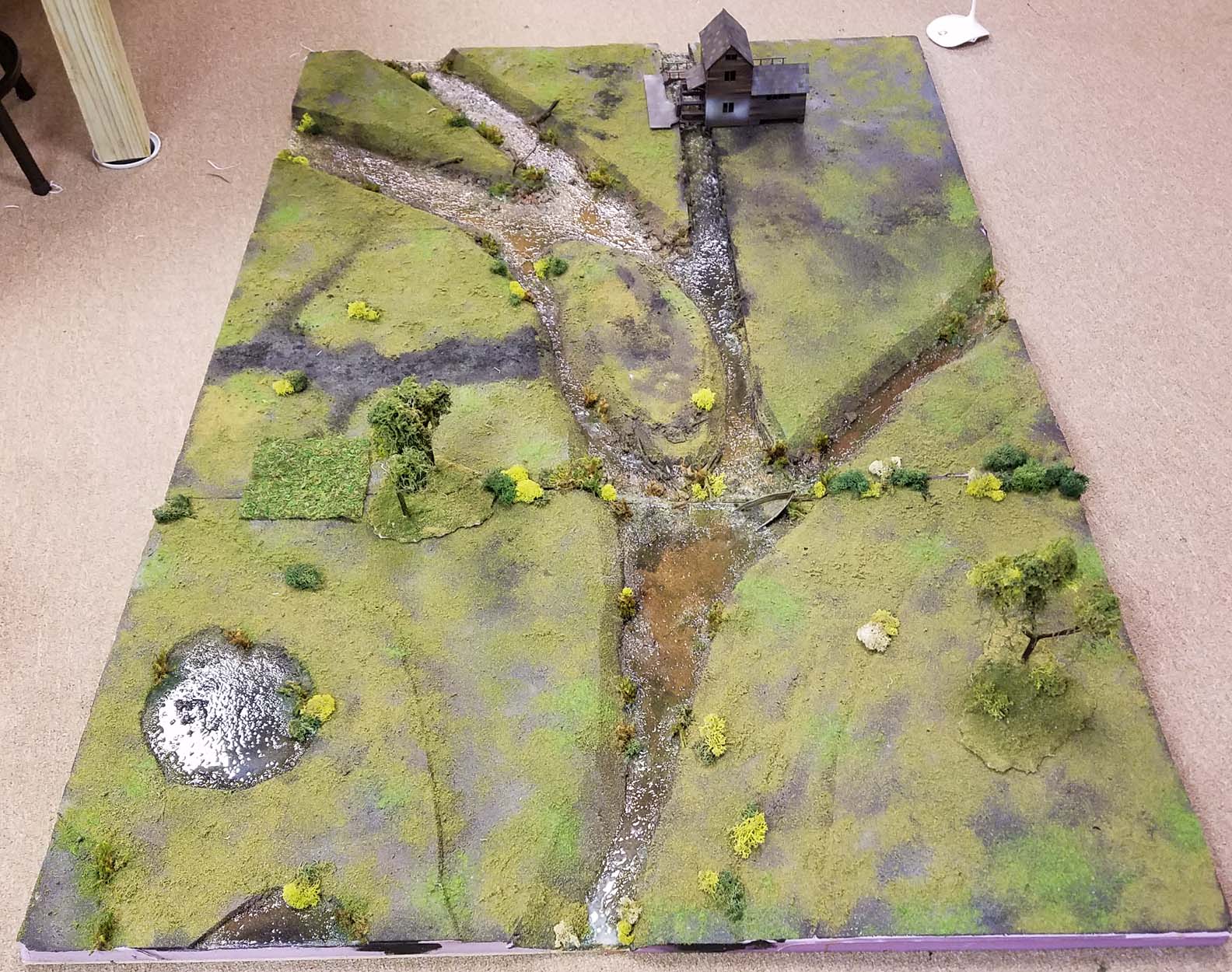 The textural differences between the water and the rock/foliage were just what I was hoping for, and the shimmering water was a lot of fun to see once everything had cured! 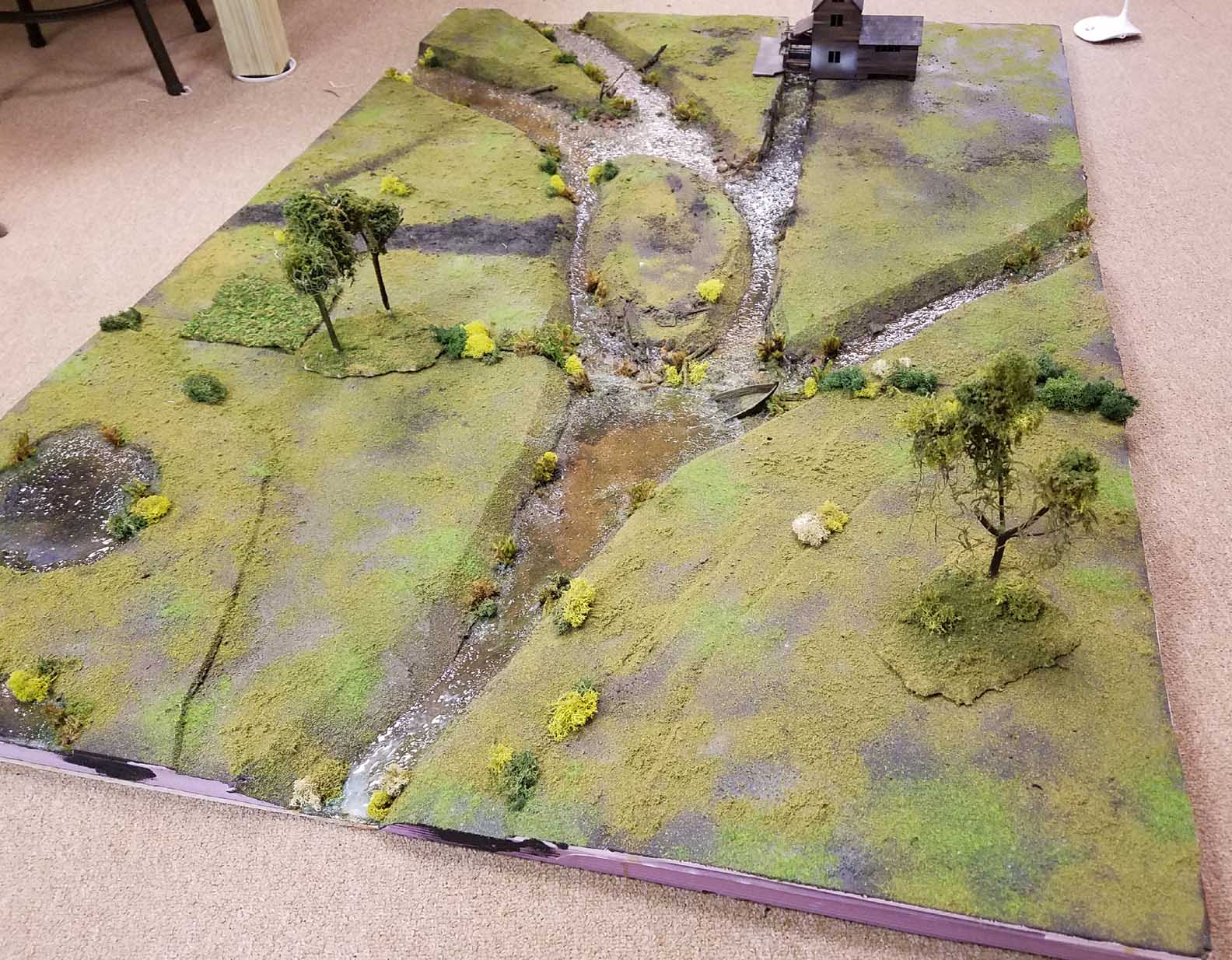 The carved channel for the watermill also worked out nicely, and flowed logically from the rest of the river. 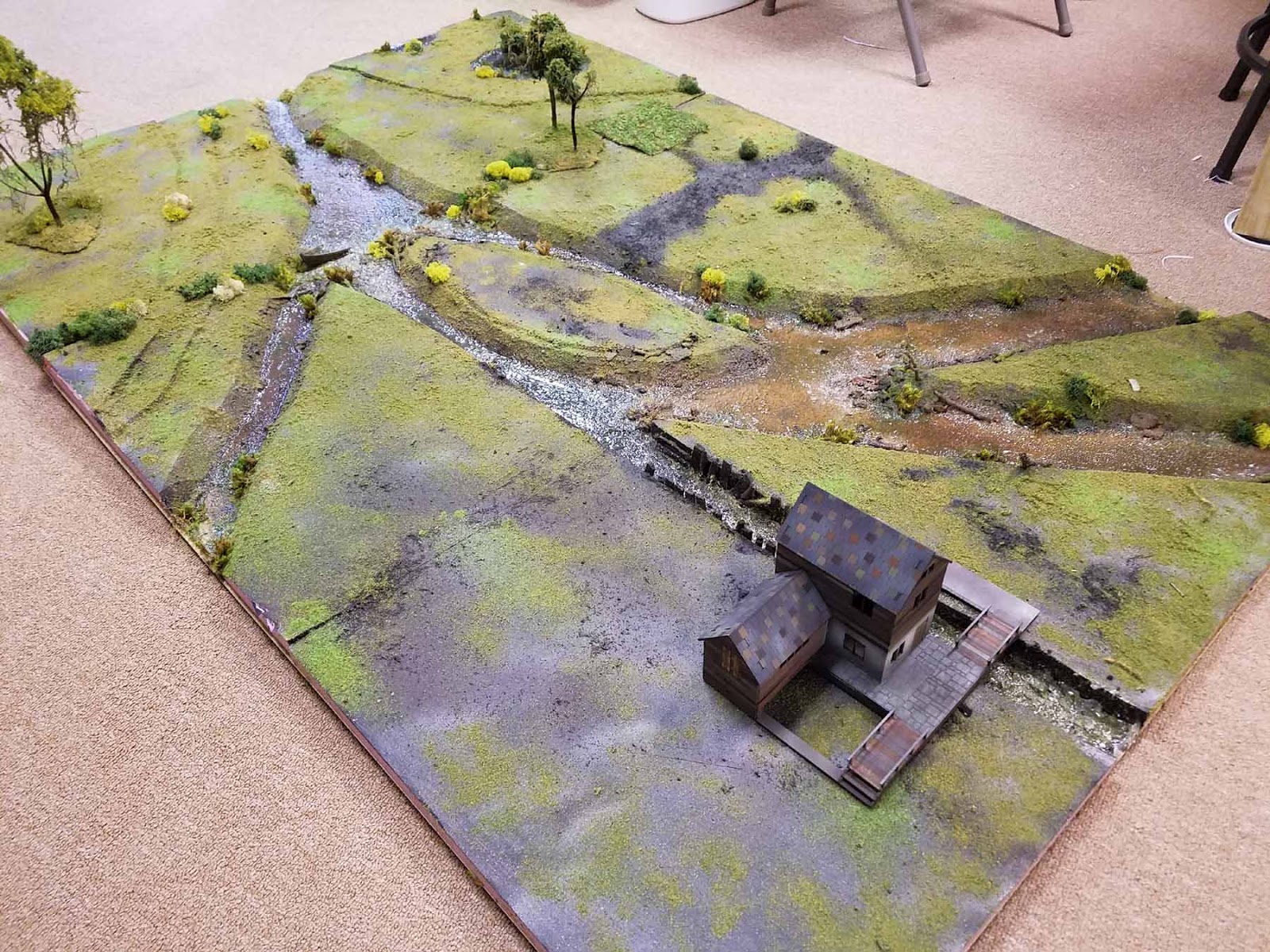 I had left some of the riverbeds the original brownish color, with some hints of the flock.  This also created a decent amount of variation from the rest of the ground. 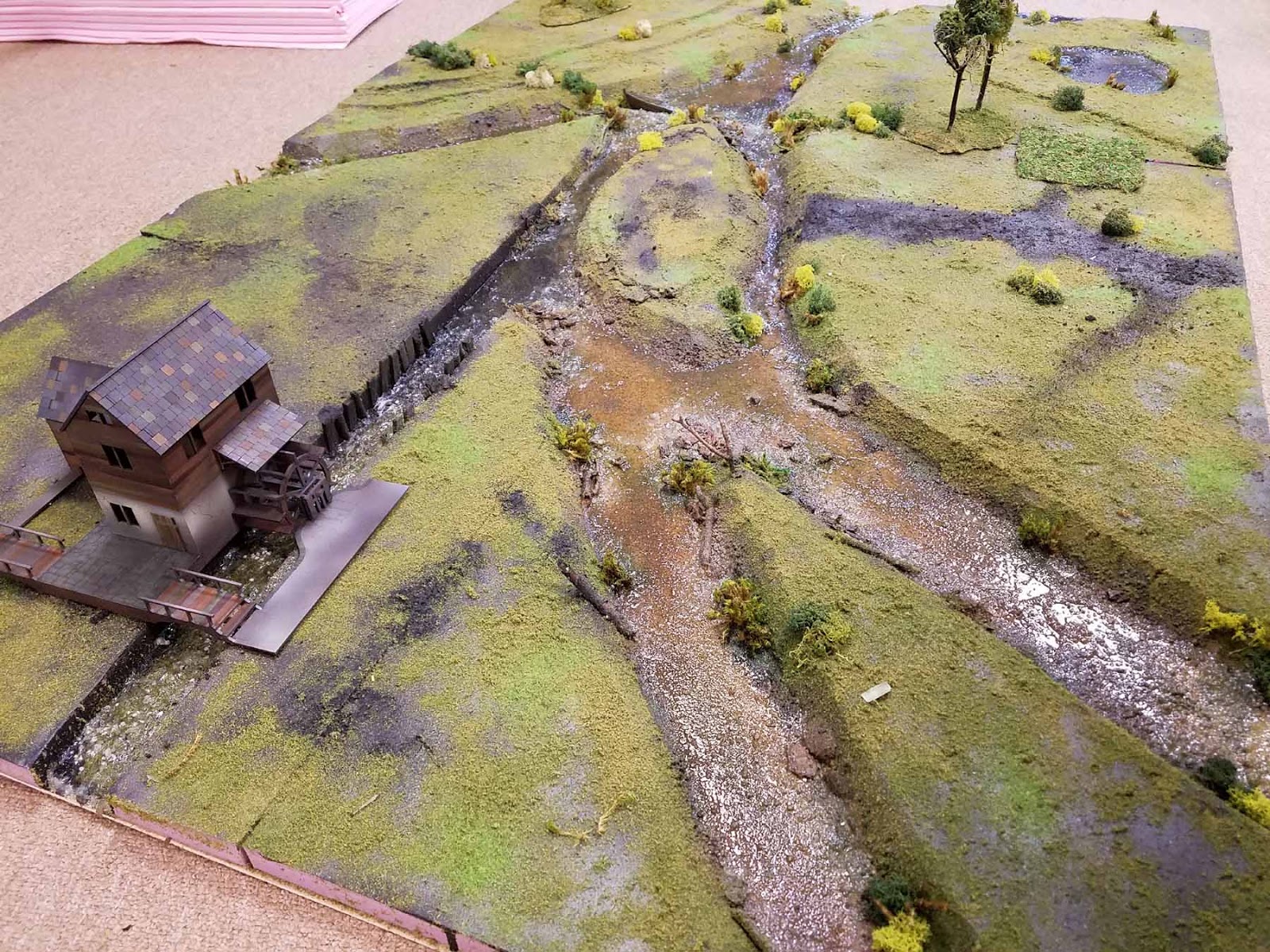 The original intent for this part of the terrain was to have a boardwalk/catwalk crossing over both of these streams, connecting to the water mill.  Since we won't be playing that game, I'm very glad that we didn't position the supporting pylons into the river beds! 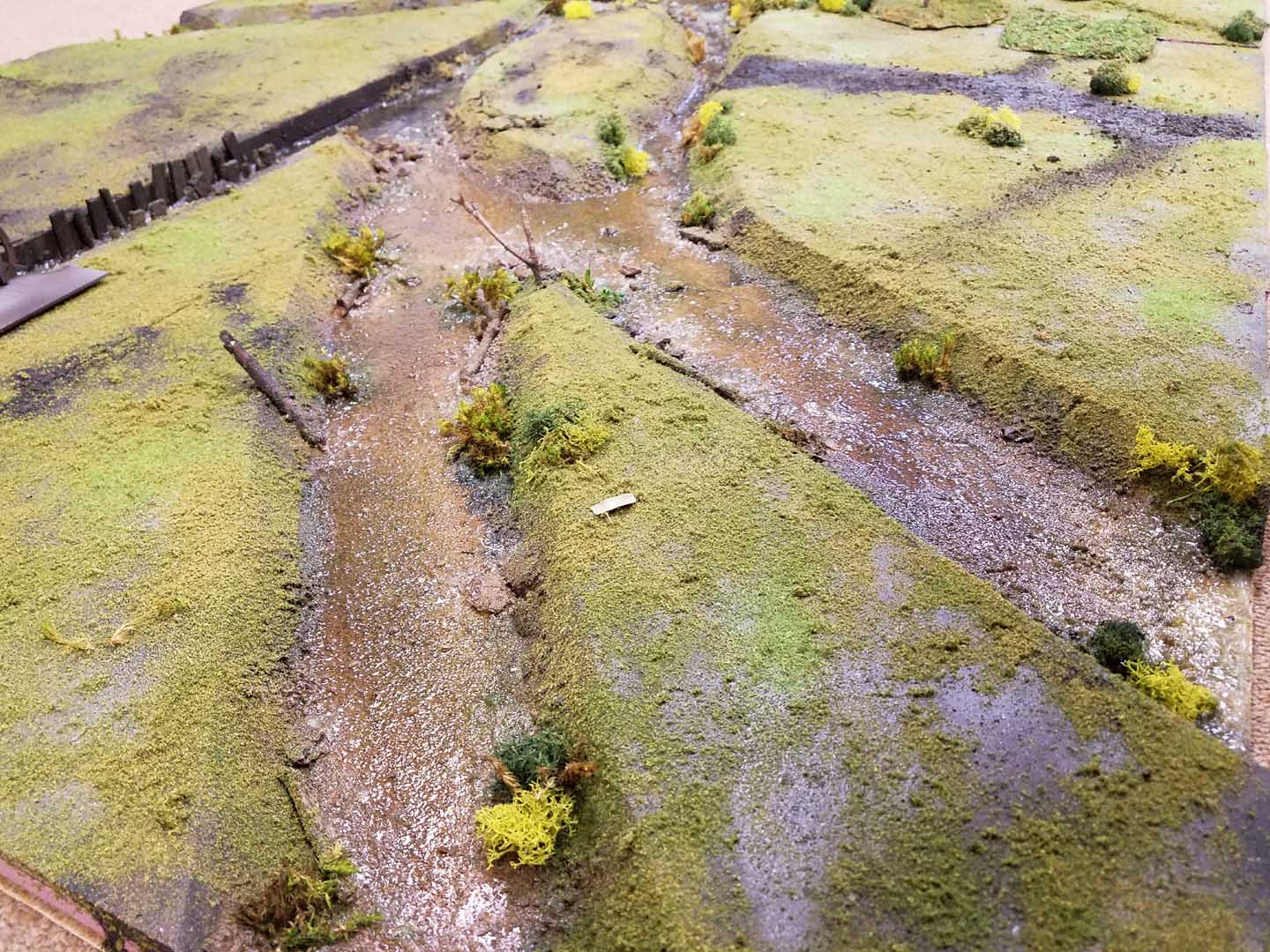 The watermill itself sits comfortably in place, with the churning waves beneath it! 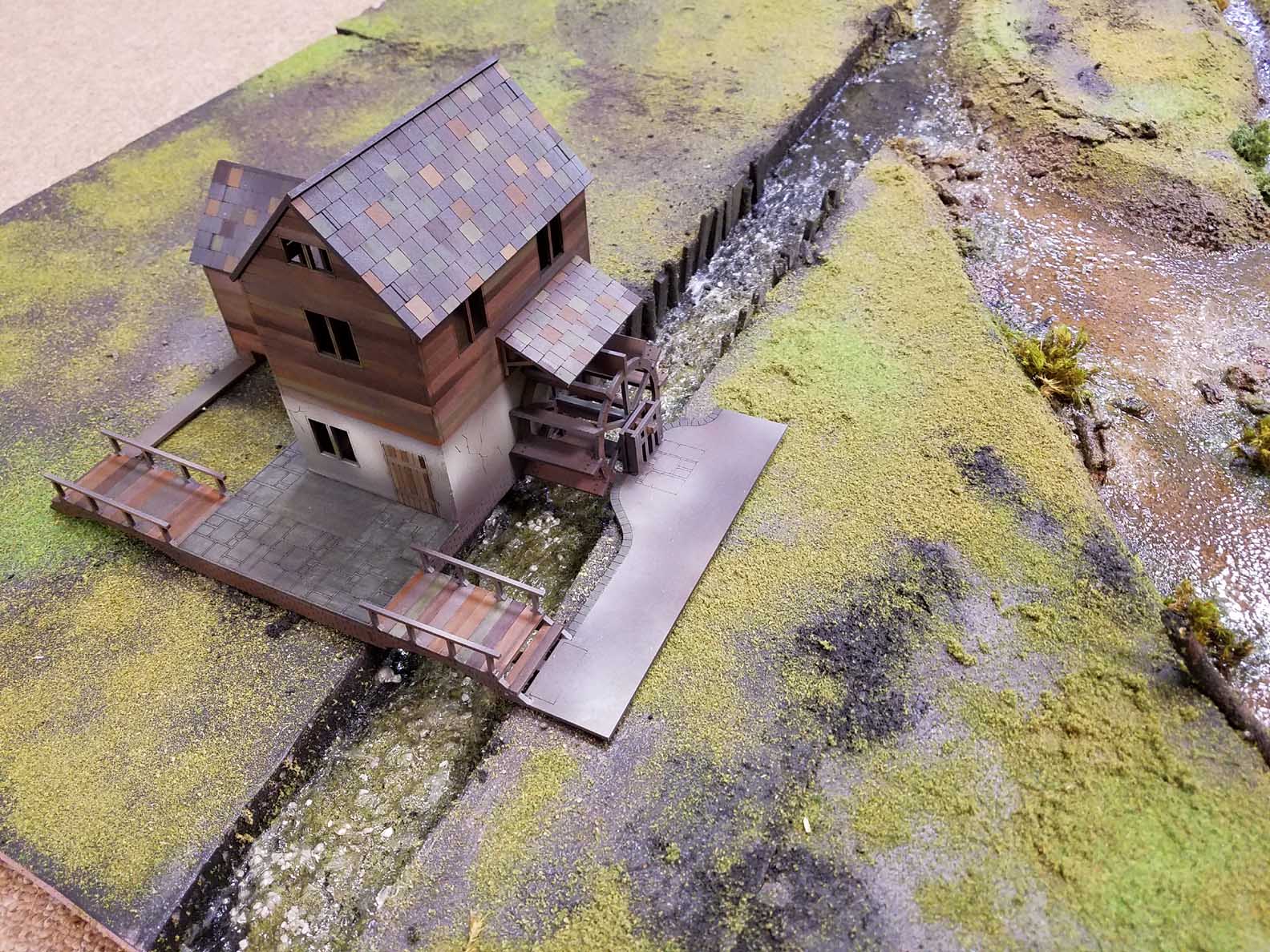 We wanted to have a few parts of the river be as wide as possible, to create a potential obstacle for advance.  The island in the center had another purpose, but now it makes parts of the river more passable for advance, which means that it is similar to a road intersection or rail head, which were frequently contested in many battles. 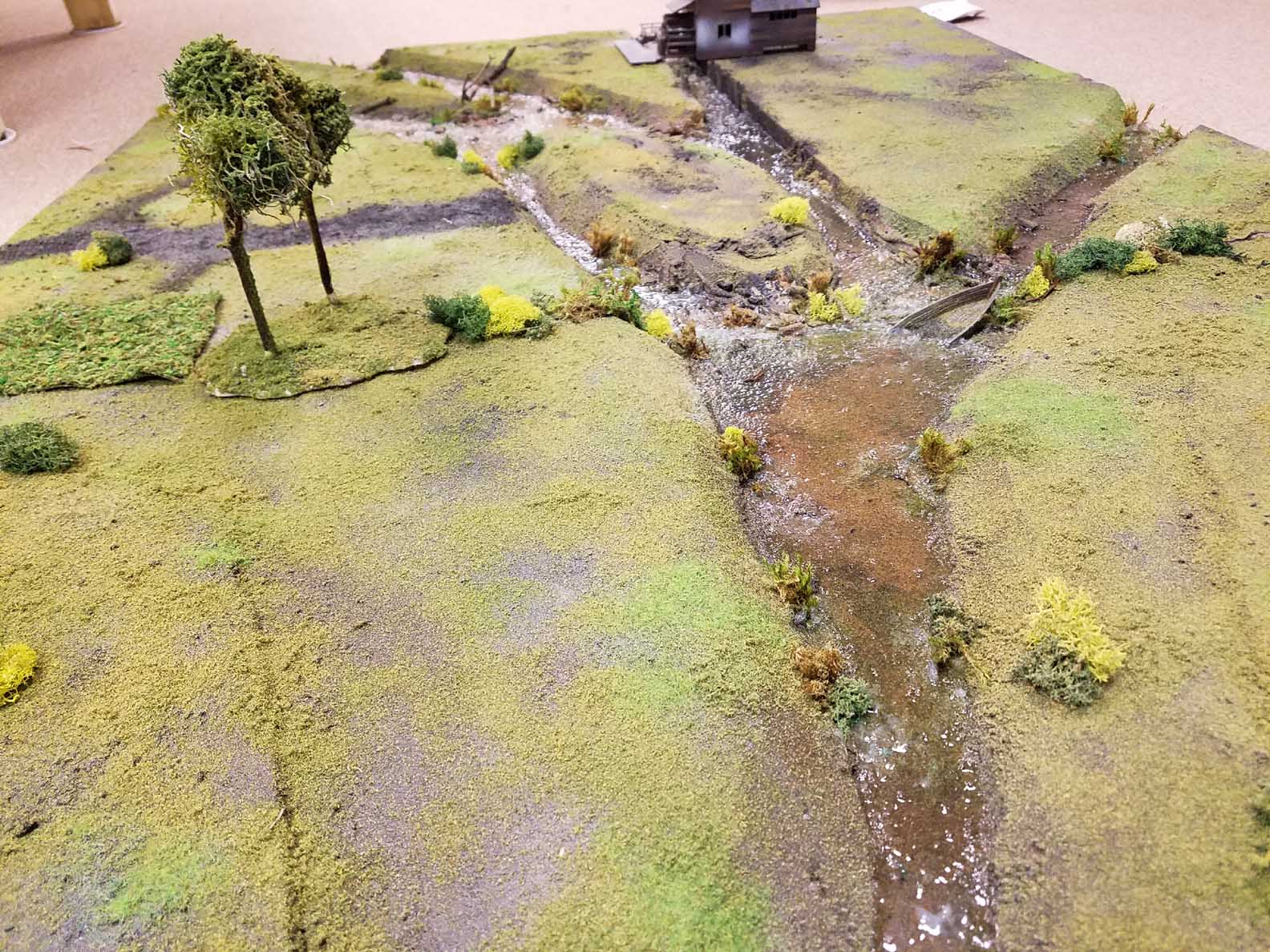 The little square piece of foliage is an experiment to see if it looked more like jungle undergrowth or farm fields. 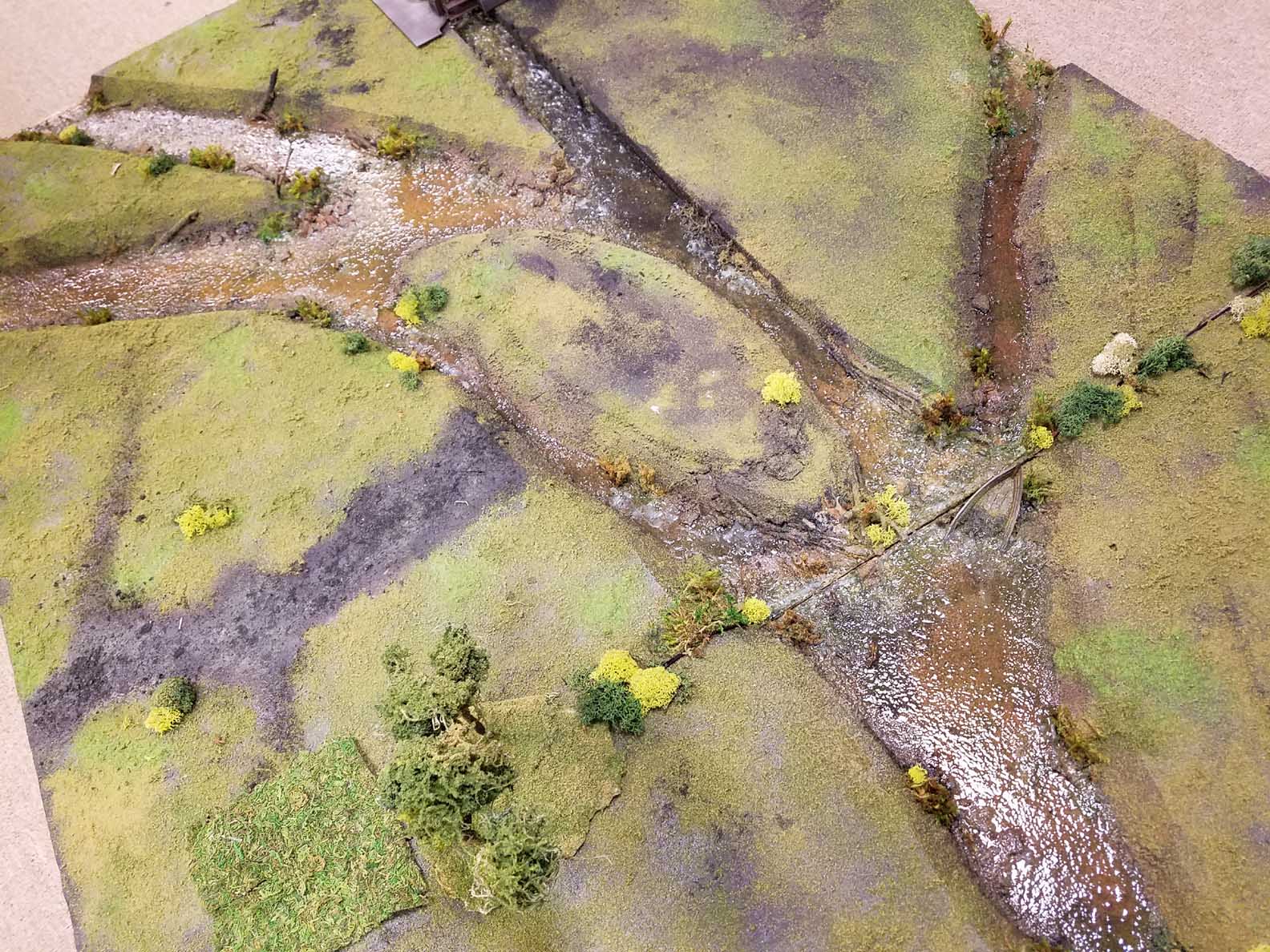 The view from above shows some of the foliage that lines the river.  I didn't want to go too crazy with this, lining the river completely from end to end.  I am making pieces of scatter terrain to place along the edges if we want it to be there. 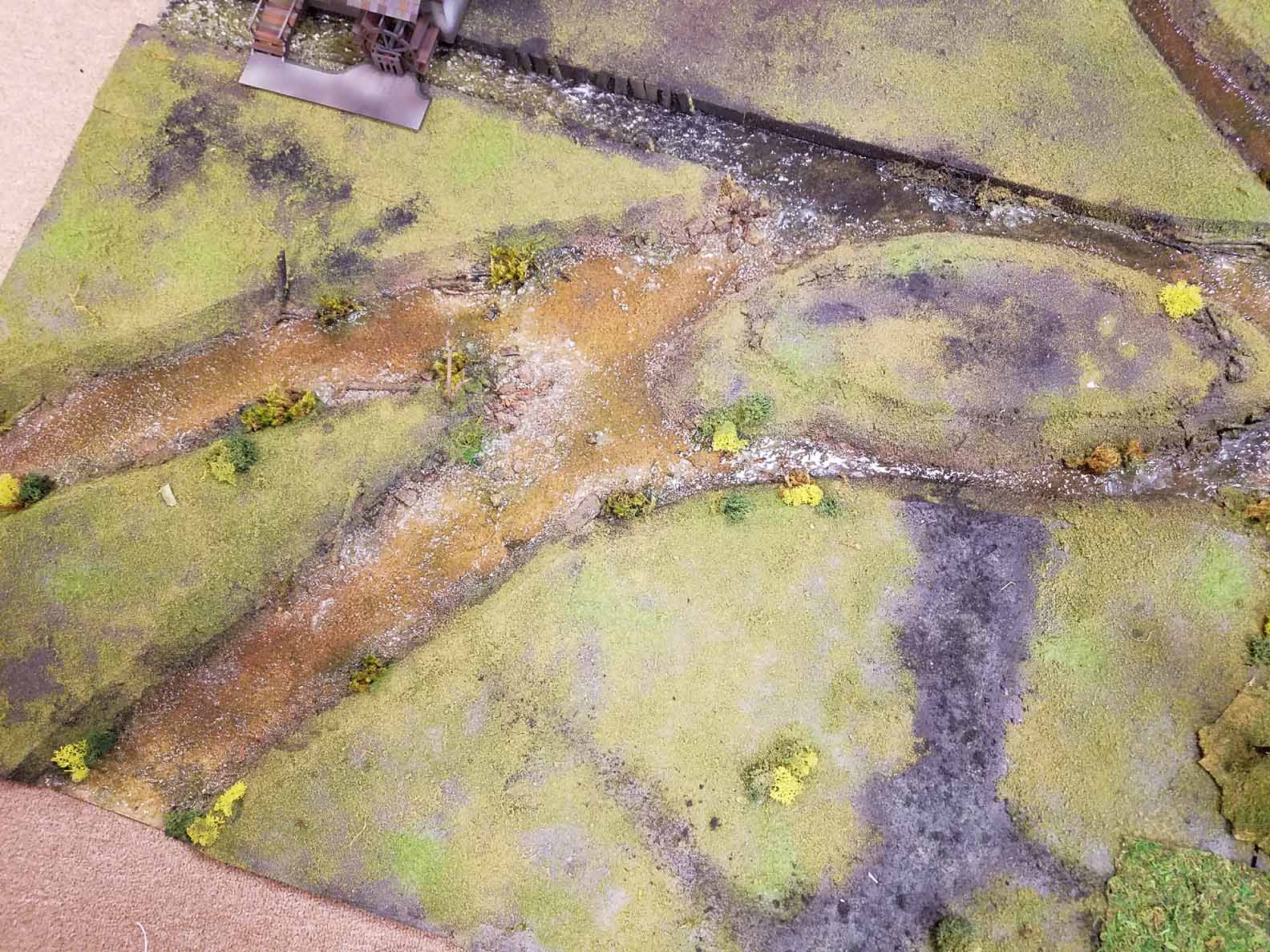 I do love the wave action that was created at these angled points.  Part of it was due to the water effects paste, and the rest of the wave action was made by the texture of the river bed itself.

If I had done more layers of poured water effects, this would have been lessened, but I only had so much, and time was the main issue.  Each pour required a few days to dry, so every chance I had, I tried to get a bit more on the board! 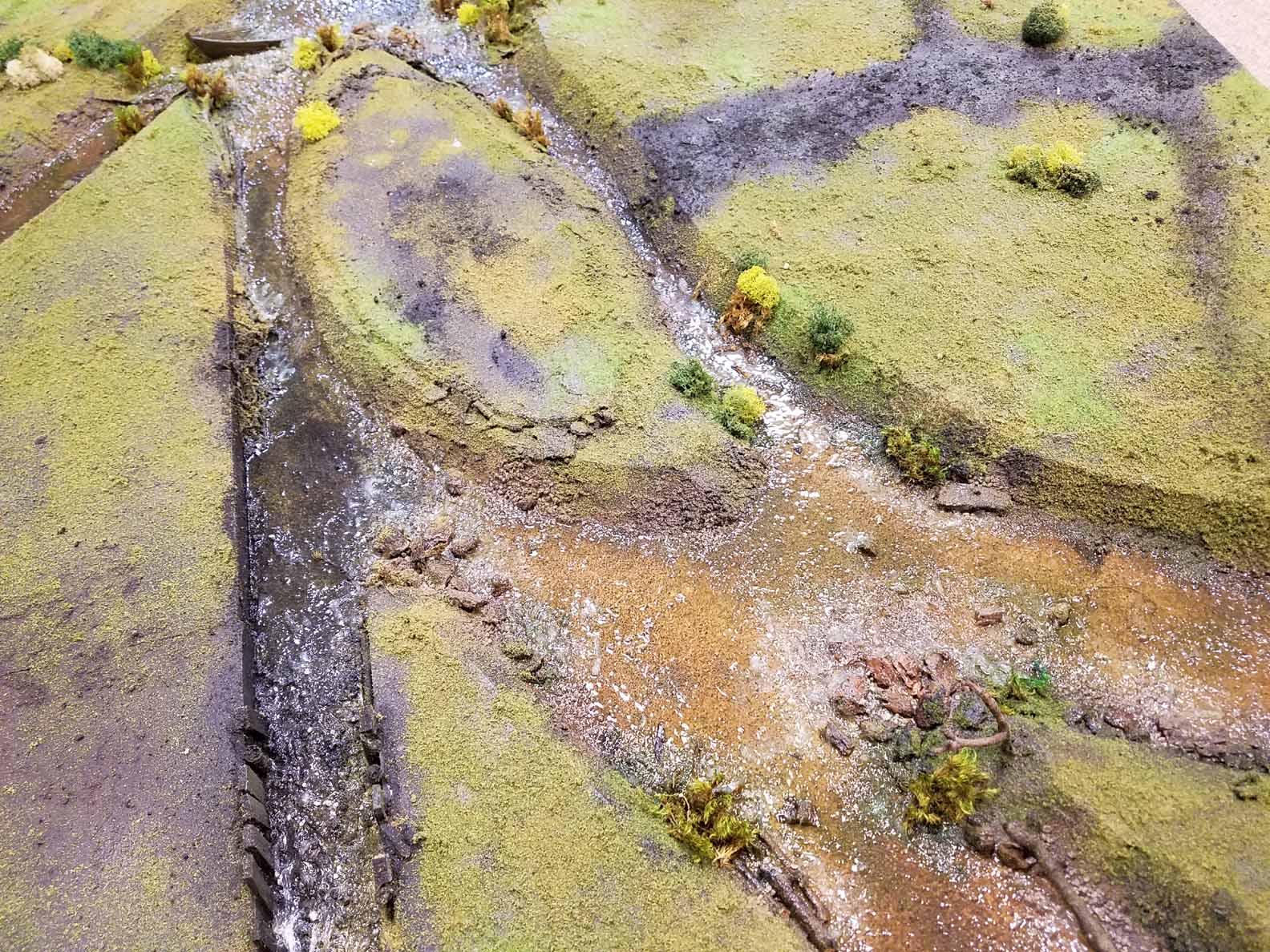 The next post will show what this looks like with minis on it, followed by some more posts on how the scatter terrain will be fashioned.

And then... battles!  Yes, actually using the terrain board!!!!! 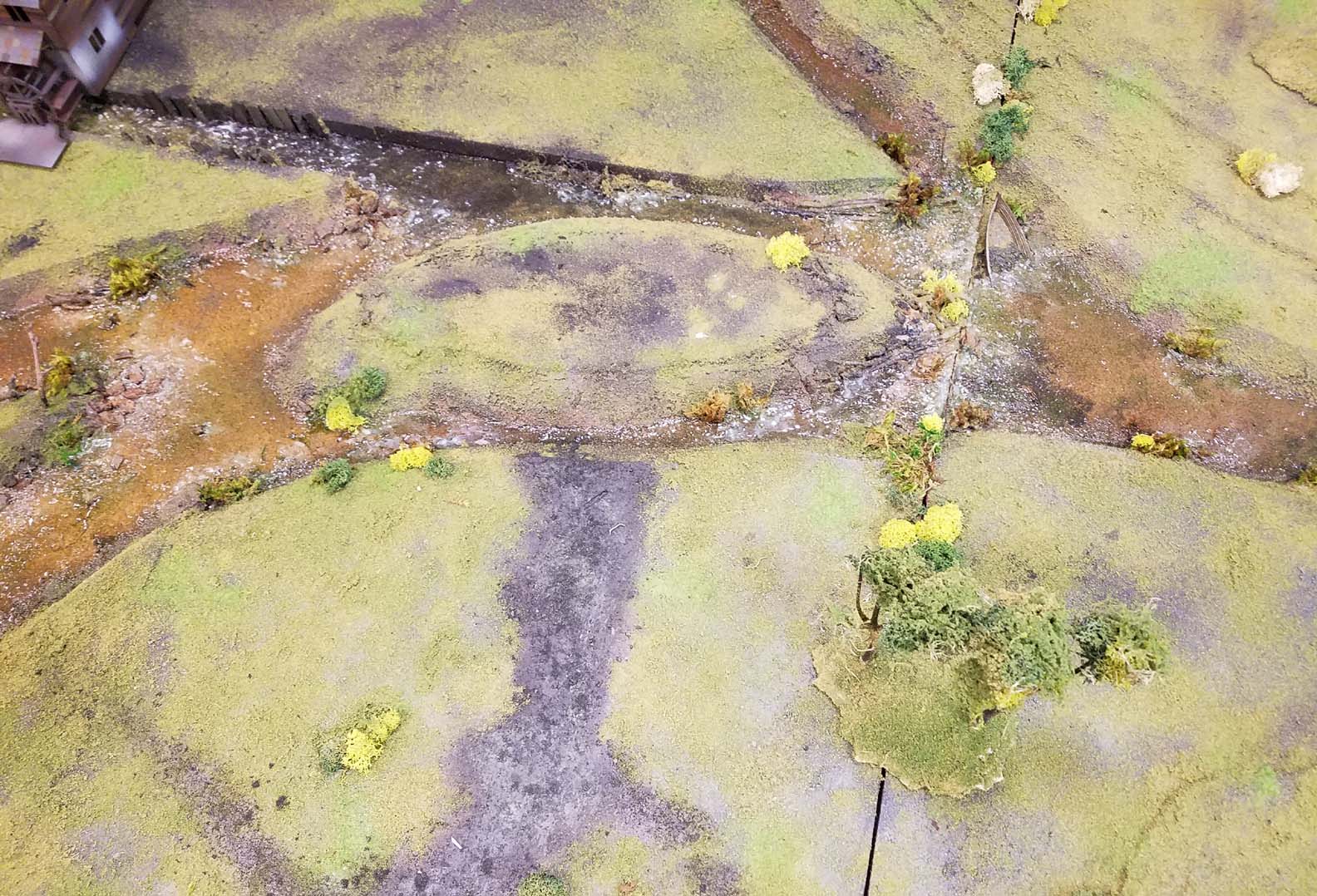