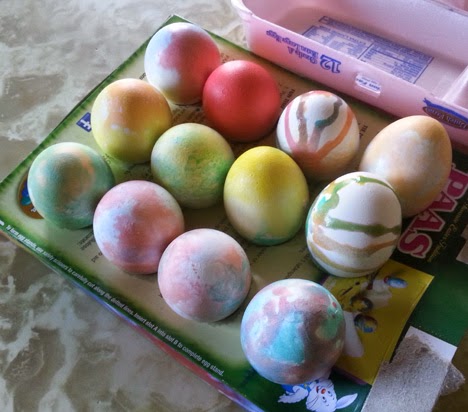 I hope that everyone has a nice Holiday!

I was fortunate enough to be hoisted away for a game that one of my gaming groups has not played in a very long time... History of the World.

This game is quite old, but it is actually a fantastic way to absorb world history in a 'living' manner, as you see a multitude of Civilizations, large and small... rise and eventually fall.

In a rough comparison, it is like Small World... just far more complex and fun :-)

Here we see the board after the first Epoch (there are 7 in all).  The Sumerians had risen in the Fertile Crescent, but were soon overrun by everyone else!  Get used to it folks, it happens all the time.

My first Civ was the Minoans.  The war at sea did not go well, which limited their expansion.  As a note, the track on the right side shows two things: the overall score (designated by a round token) and the strength, shown by the square counters.

My color was black, by the way. 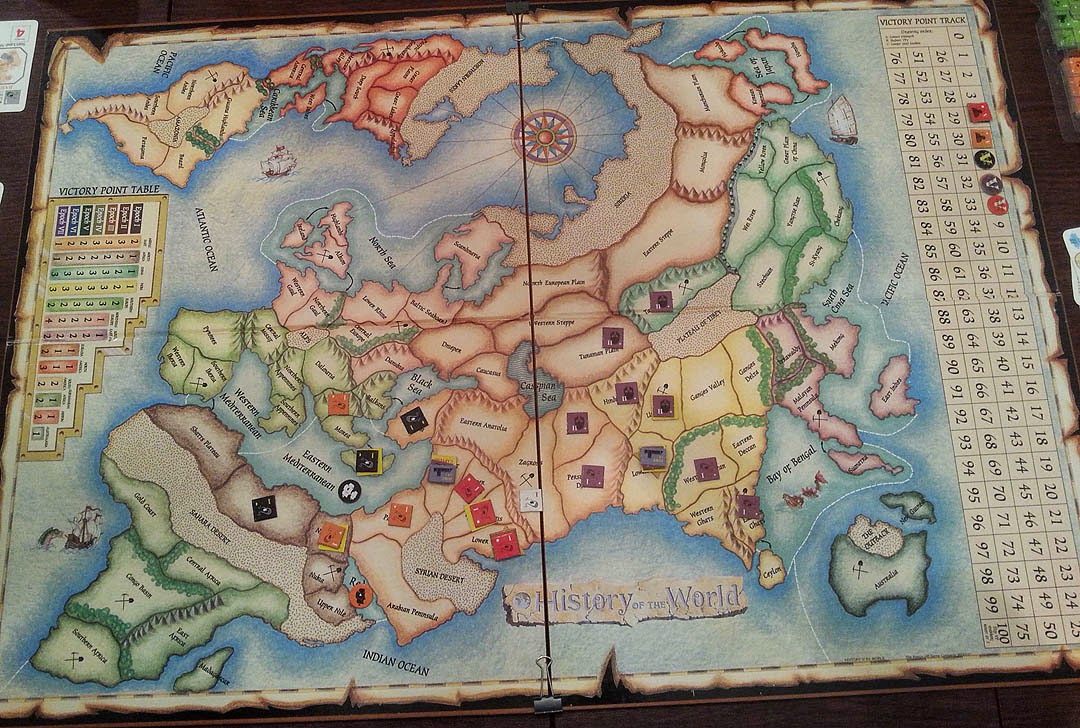 Each player is given seven event cards.  These can be disasters, plagues, barbarian attacks, tiny kingdoms that pop up around the globe, extra armies, and so on.

I chose to use some of these in the Second Epoch.

One of my event cards was a revolt by the Israelites in Palestine.  That gave me the fort/city that you see.  I think I also used my +1 attack roll card.

I gambled early that the Persians could do some extra conquest with their turn.  Keep in mind that you rarely get to choose the Civ you play.  In all likelihood, it is being passed to you by someone else.  Should you be out in front... or way out in front, you are going to get a very undesirable Civ!

I became the early front runner via a certain combination. 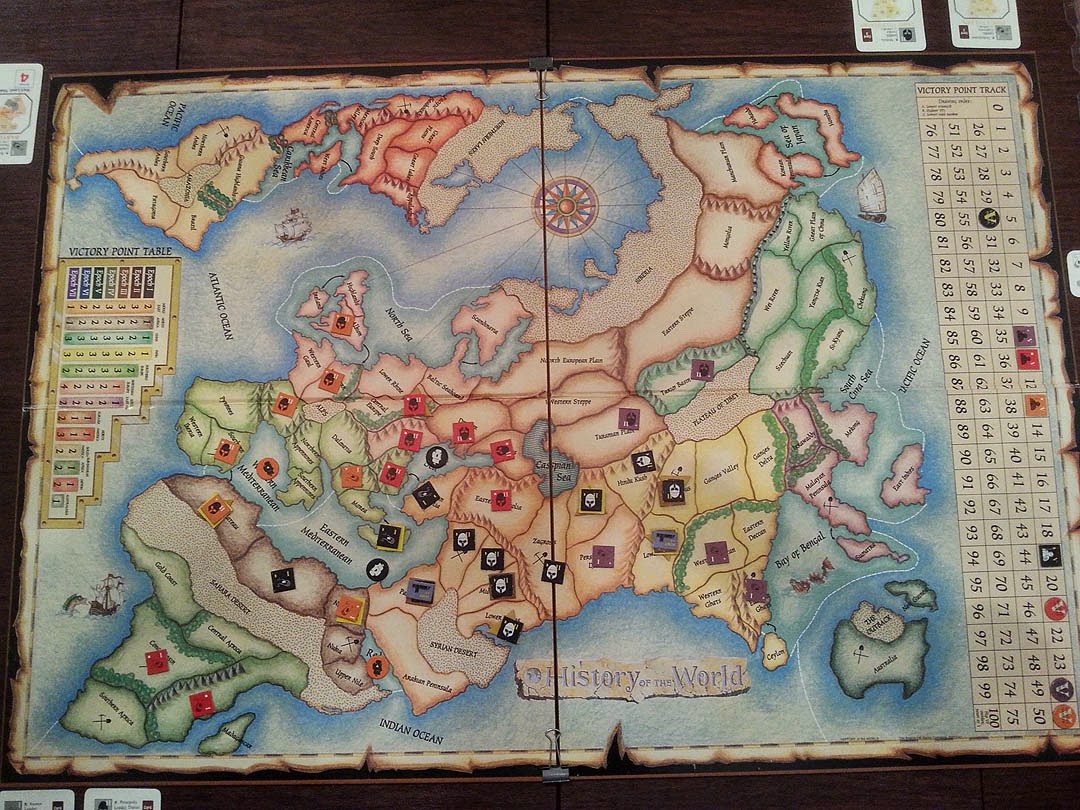 Here we have Epoch three.  I was given the Celts, who are one of the weakest civs of that Epoch.  However, they go first!  I had just gone last with the juiced up Persians.  This meant that all of my previous conquests would still be on the board for the counting phase.

This more than doubled the amount of points I would have gotten.  Lessons learned for the opponents. 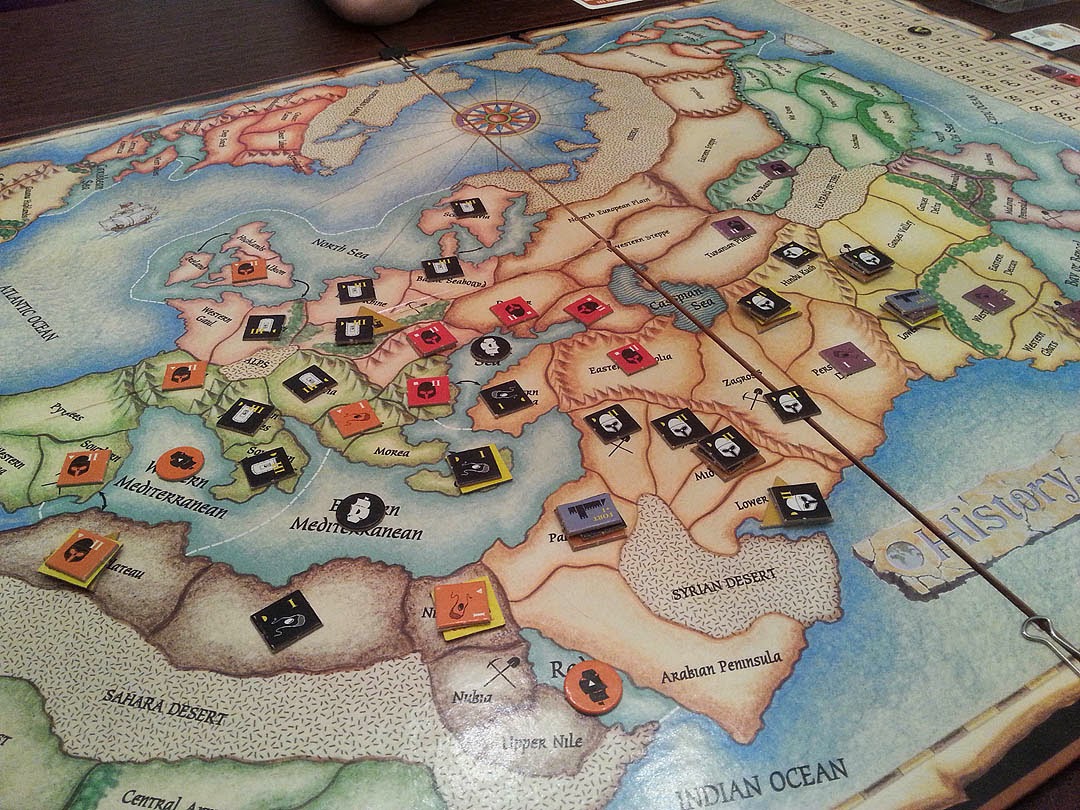 Since there would only be four players, many civilizations would not be seen.  There are several Chinese Civs that normally arise there.  However, that was not the case, which left that valuable territory open for the claiming... if you could get there! 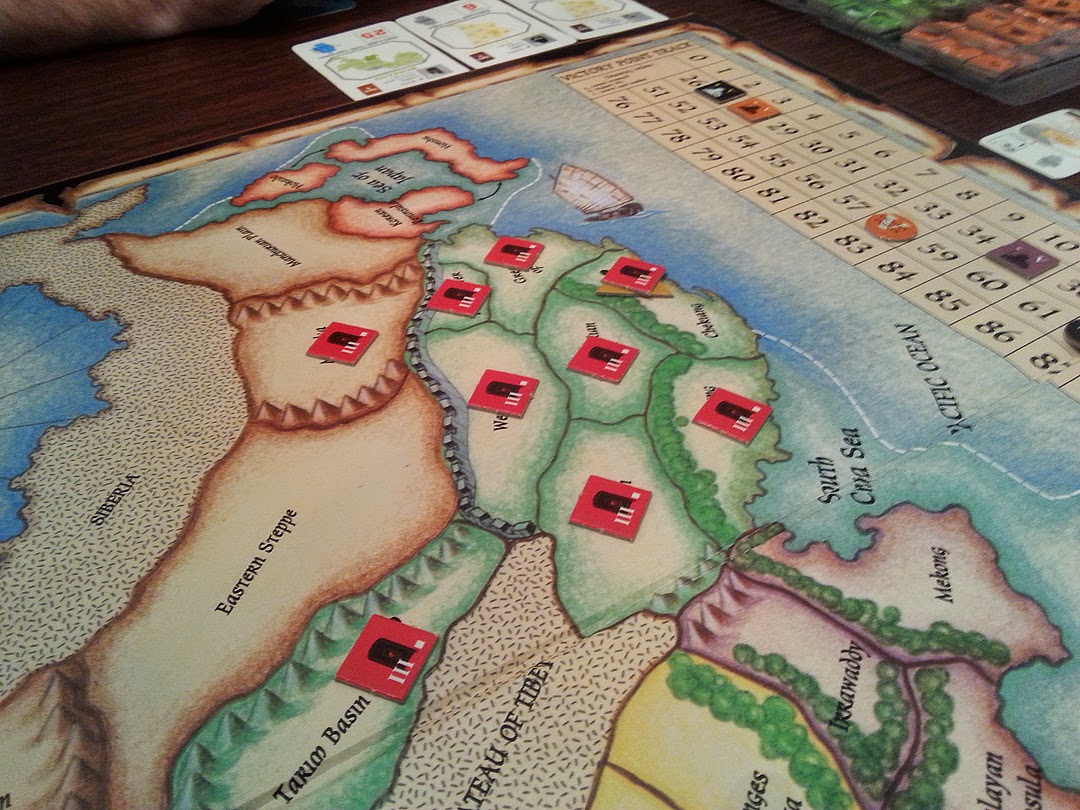 Remember I said don't get too attached to what you have on the board?  Case in point, as Alexander and his Macedonians plow through the Persian Empire. 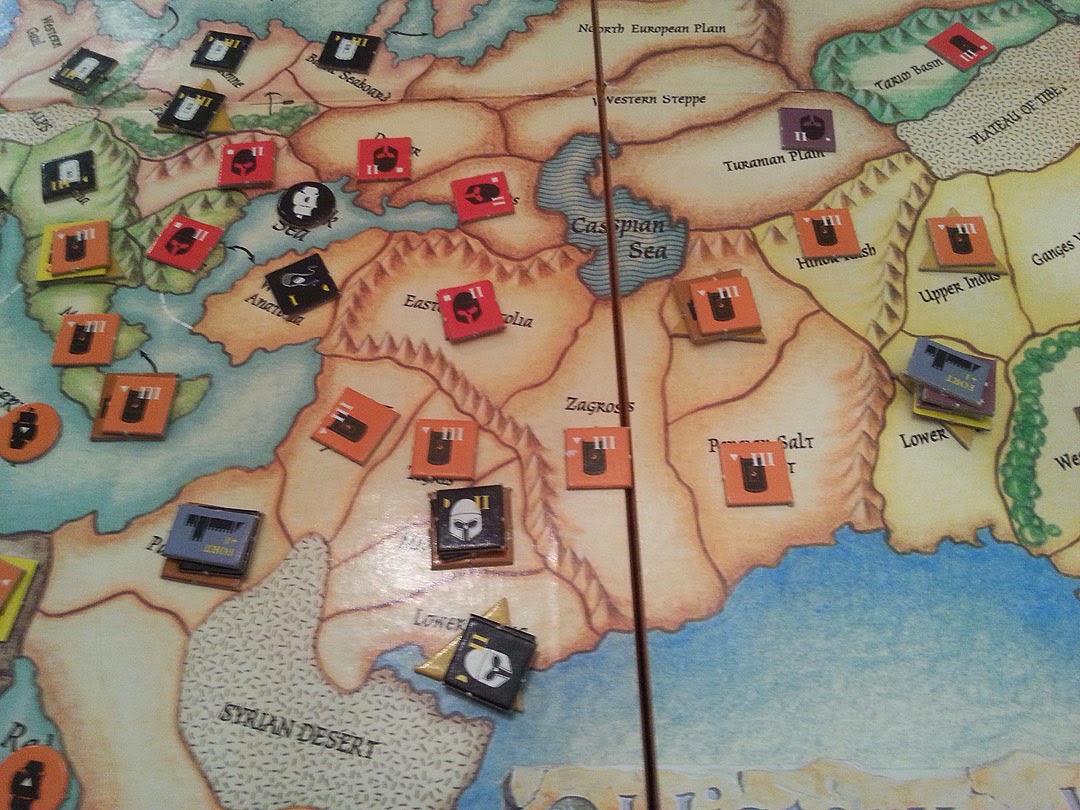 This is the end of Epoch three.  You can see that I am out in front, but Hank just caught up big time with the Macedonians. 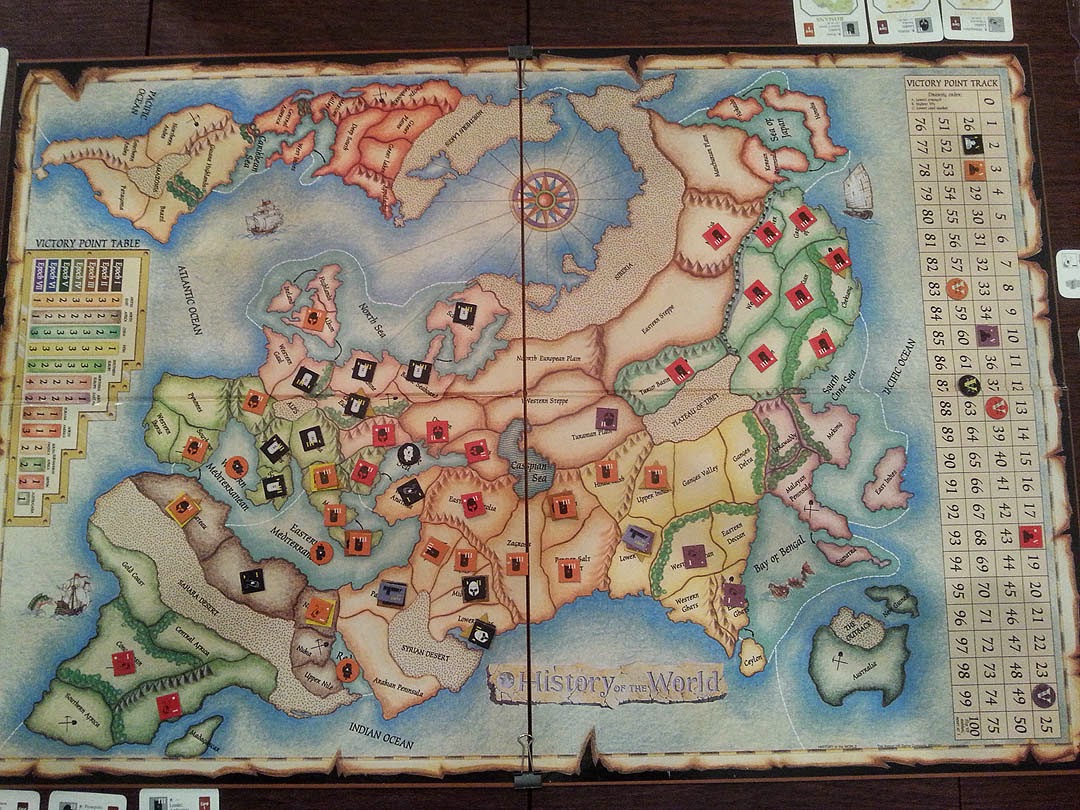 But wait... the Roman Empire!  Observe the huge swath of Purple.  Some civs are incredibly powerful, such as the Mongols, etc.  When these show up, the board is going to change rapidly, and so does the leader! 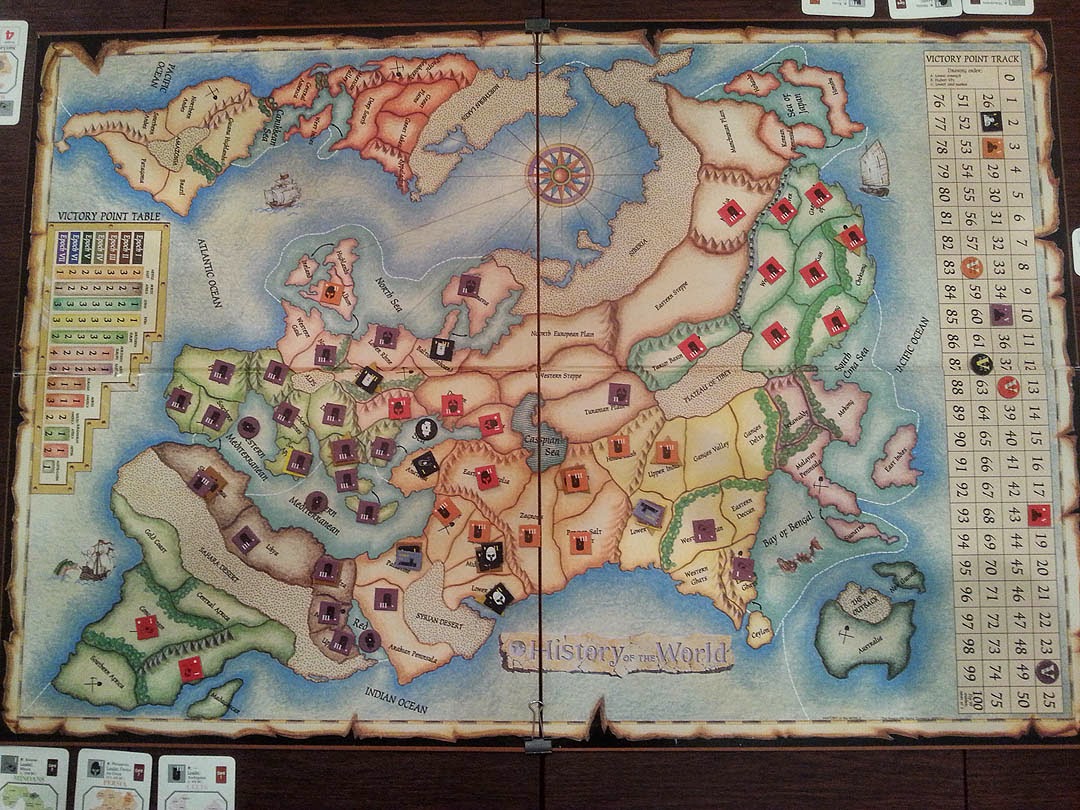 So in Epoch Four, I was given the Huns.  This was unfortunate, since that area of the board was worth very little at the time.  Also, the Romans were heavily dug in across the more valuable Europe, but I had no combat cards to root them out.

Instead, I turned east to do what I could in the more vulnerable desert! 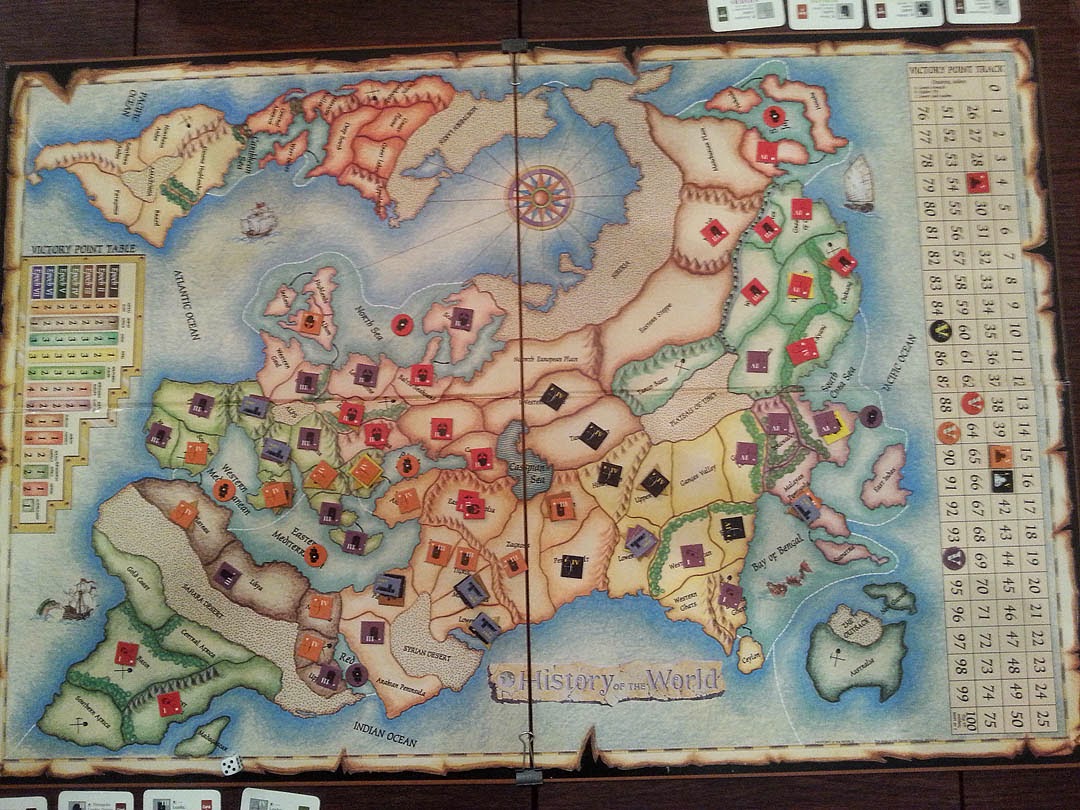 Epoch Five comes and goes.  I had the Vikings, which did not get me very many points.  There is very little remaining of my previous empires, with the exception of some cities, forts and monuments.  These keep me from falling too far behind.

This bummed me out at the time, but pay some note to the ship token in the Atlantic, as well as the lone Viking token in Florida! 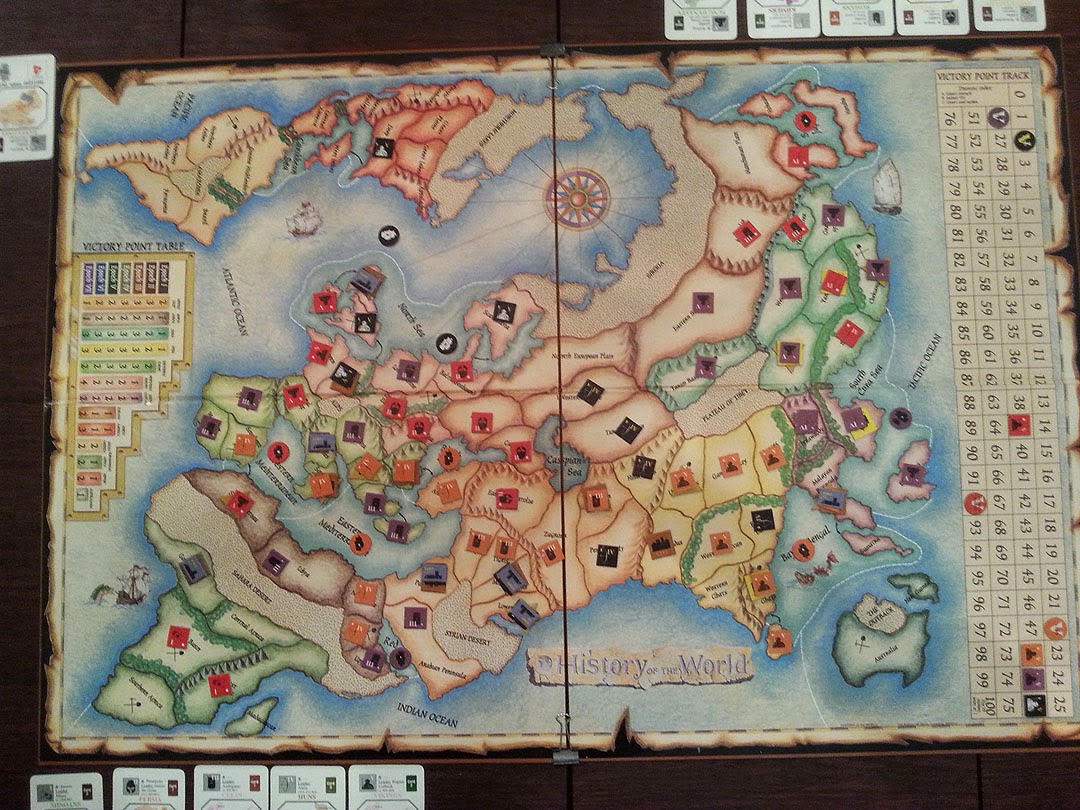 I was passed the Moghuls, which was not terribly helpful.  Or so I thought.  I used the Black Death to clear out a few key spaces in the area, which meant that my minimal armies would have less opposing them.  This allowed me to get some cities, resources, and monuments.

Also, it allowed me to get 'presence' in another area, which is always important.  I also got domination in an area, which garners you more points. 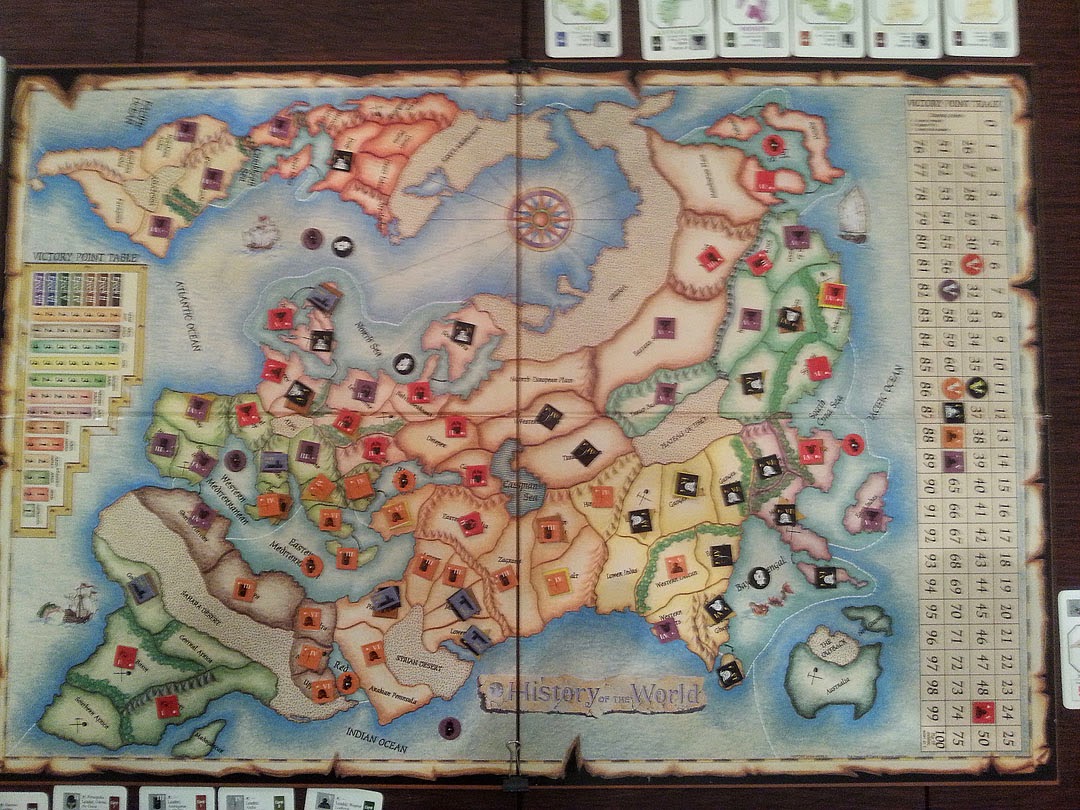 Epoch Seven would prove to be Epic for me!  As it began, I was far behind the leaders, just a few points out of last place.

I was given France, which is normally a decent Civilization.  However, their power was boosted by orders of magnitude by virtue of them going first!  It was very fortunate, because I had gone last in the previous Epoch.  Recall what happened the last time I pulled off that combo.

So, the New World, Australia, and other valuable territories were wide open for conquest!  Notice many more black tokens on the board.

In addition, I had a few event cards left.  Everyone else was tapped out.  I had a minor kingdom in Nippon, which gave me 6 or 7 extra points.  Remember that... 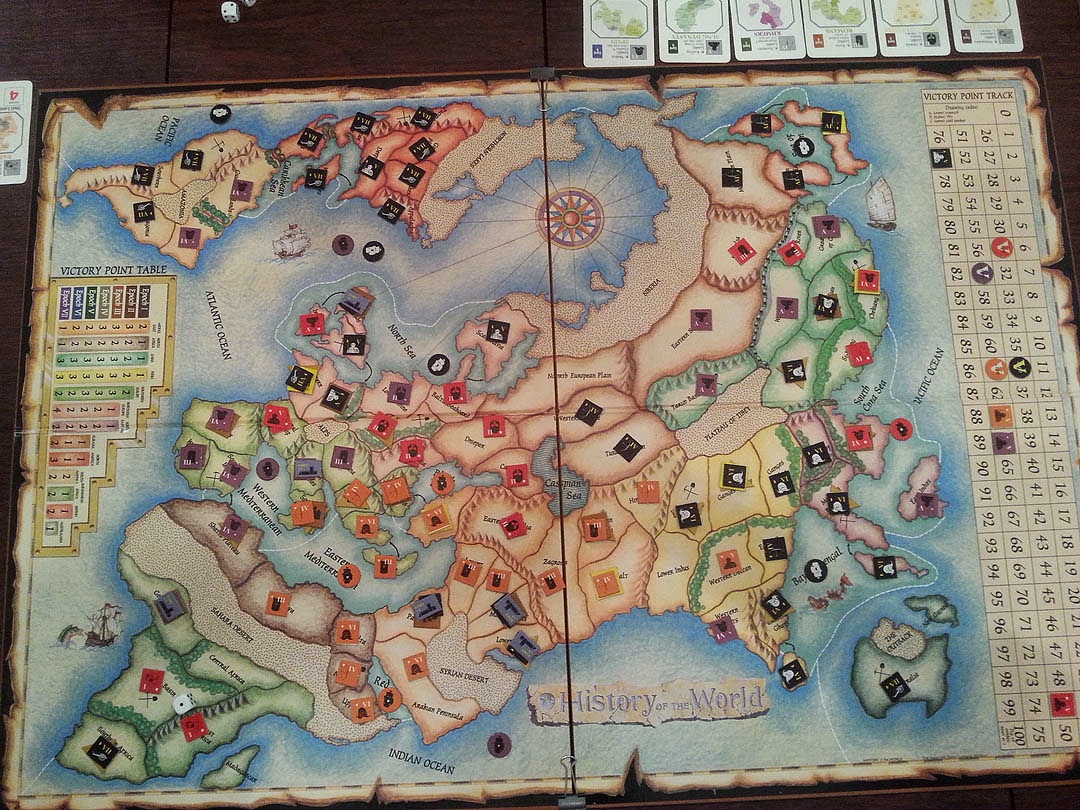 Everyone else takes their turn.  Tina had the British, but their larger numbers were blunted by the hordes of French occupying the New World.

The same would hold true for the two front runners.  Hank had the U.S., which was a disaster for him.  No ships, and a losing battle in North and South America.  Finally, Dave was given the Germans.  He had to get a huge amount of points to catch me, and not a lot of troops to do so.

In the end, he attempted to attack Paris.  However, three attempts were turned back!  Vive La France!!!!

The points were counted up, and as you can see, I reached 200.  Hank was 6 points behind... exactly the amount of points gained by the minor kingdom.  So, hanging onto those cards until the last minute worked ot well. 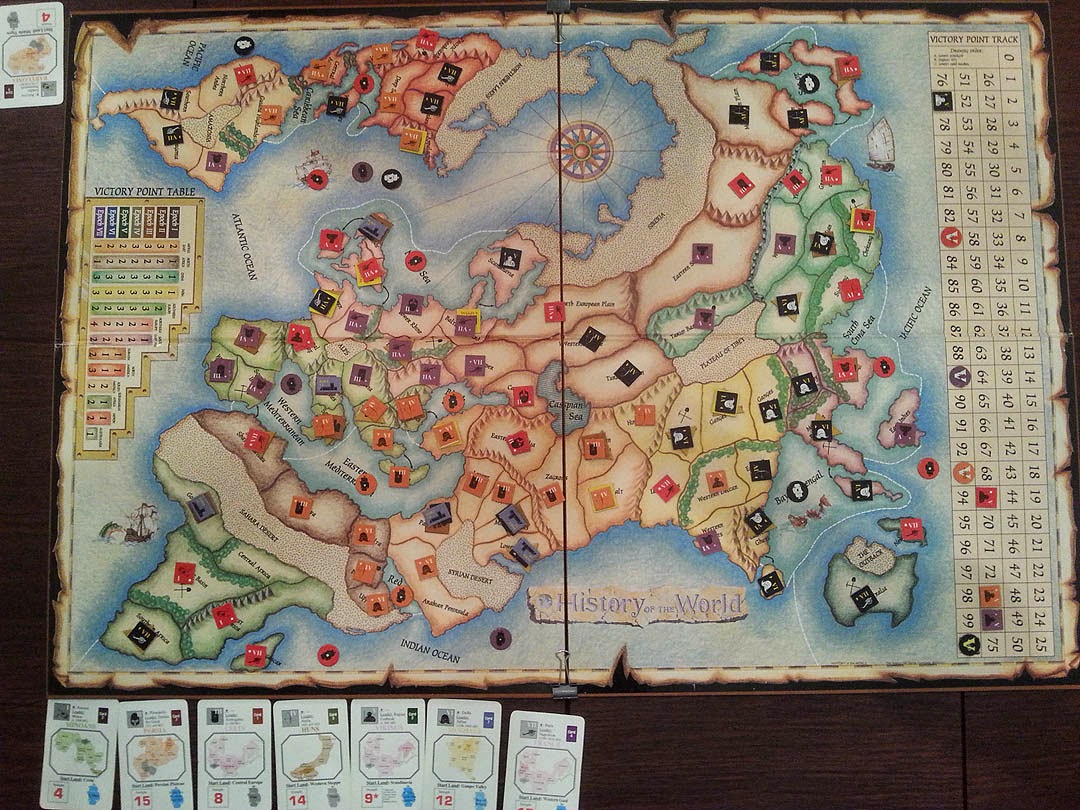 A little close up on the Civilizations that I played.  You can see where they arise, and their relative strength.

This was a surprise.  Somehow, these three cities survived the entire game.  This meant a lot of 'hidden' points over the entire length of the game.  Even when the rest of my lesser territories were overrun, I could still gather key points in this way.

A very interesting game.  You really learn a great deal.  A neat educational tool.  However, it is long out of print.  Bummer!  Thanks to all for the Easter Eve game night! 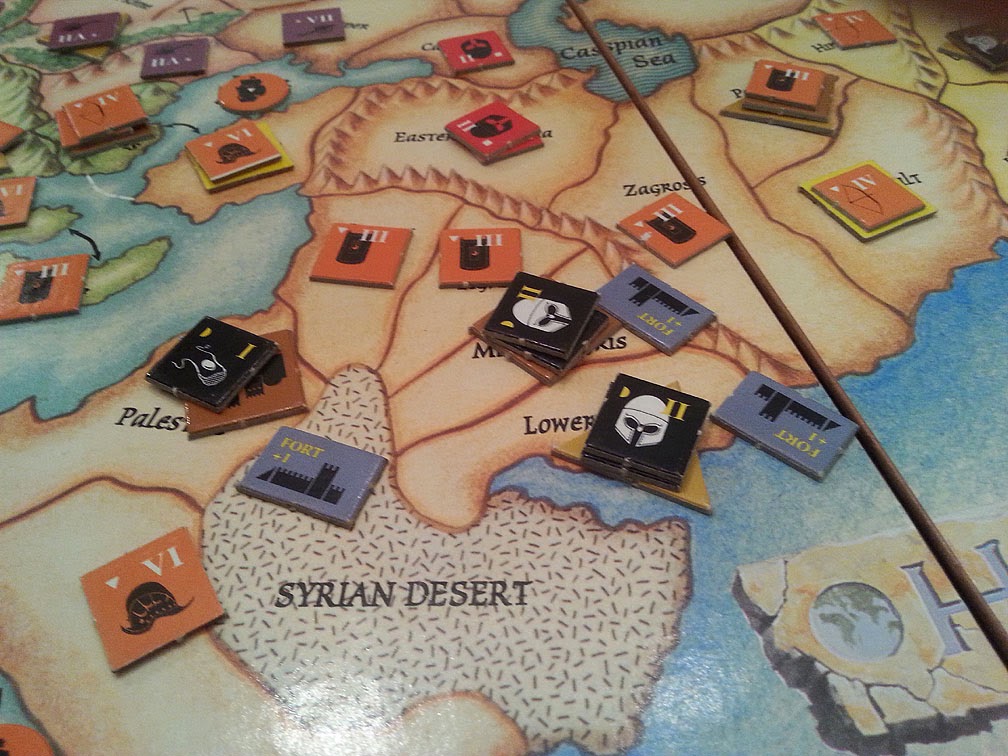 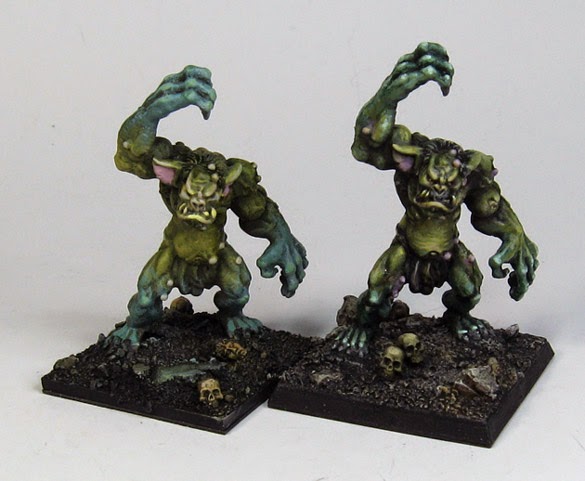 A few quick shots of the glazing step by step prop.

This view shows the first three steps.  Keep in mind, the glazing technique does not break down this neatly into steps, but I tried to modify it a bit so that it would be more apparent.

I try to guide the glazes throughout the entire miniature as rapidly as possible, much like the initial shaded basecoat layer. 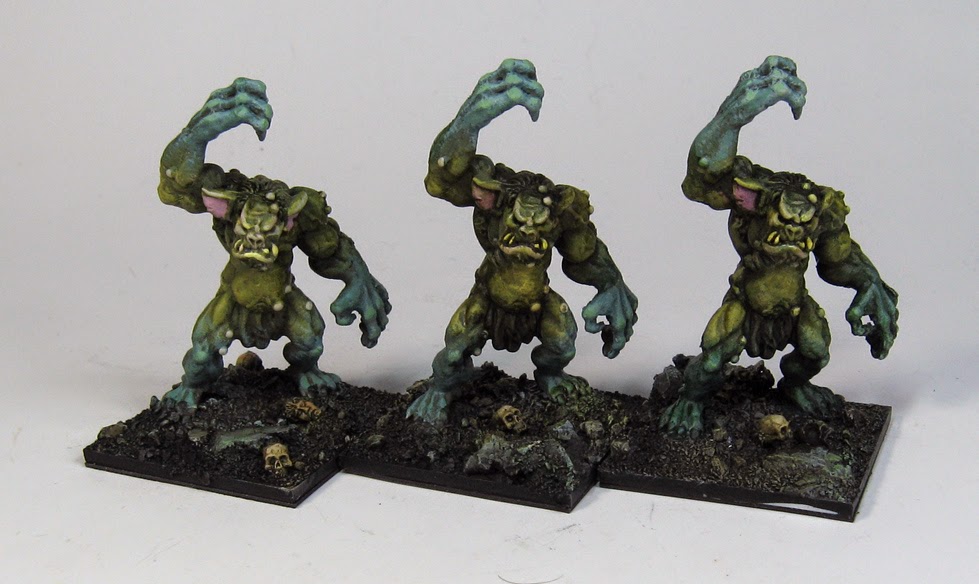 The final stages here.  Another crucial difference in these later stages of glazing is the switch to "lighter" glazes, in which lighter shades of opaque paint are mixed with glaze colors to create a semi translucent light color.  These are very fun to work with.

They also contribute greatly to fun, subtle color variations in the midtones, and help to create smoother blends. 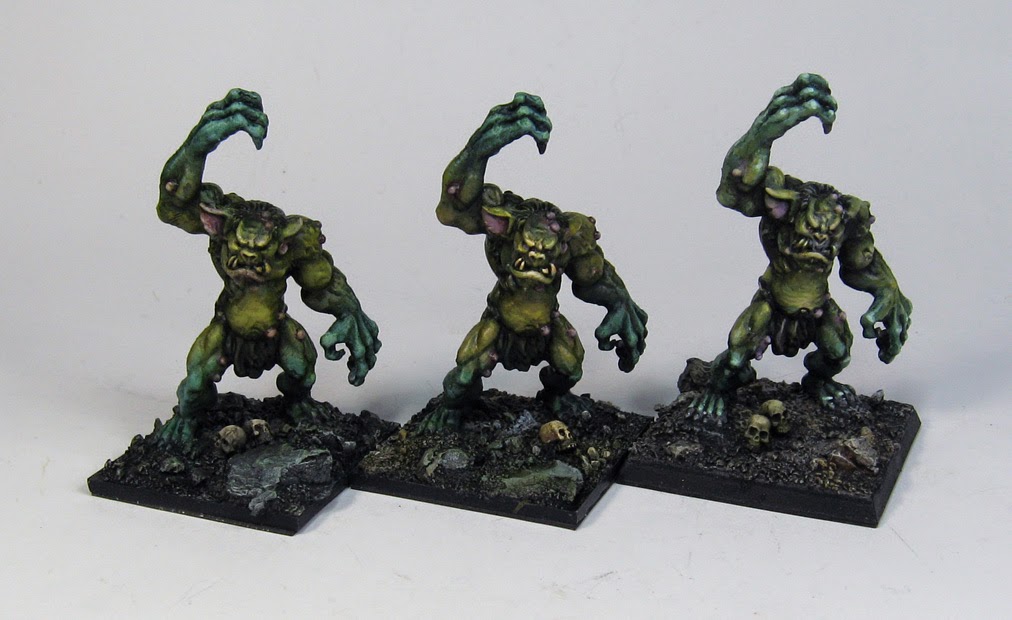 First to last in these images.  Starting from Shaded Basecoat to final result. 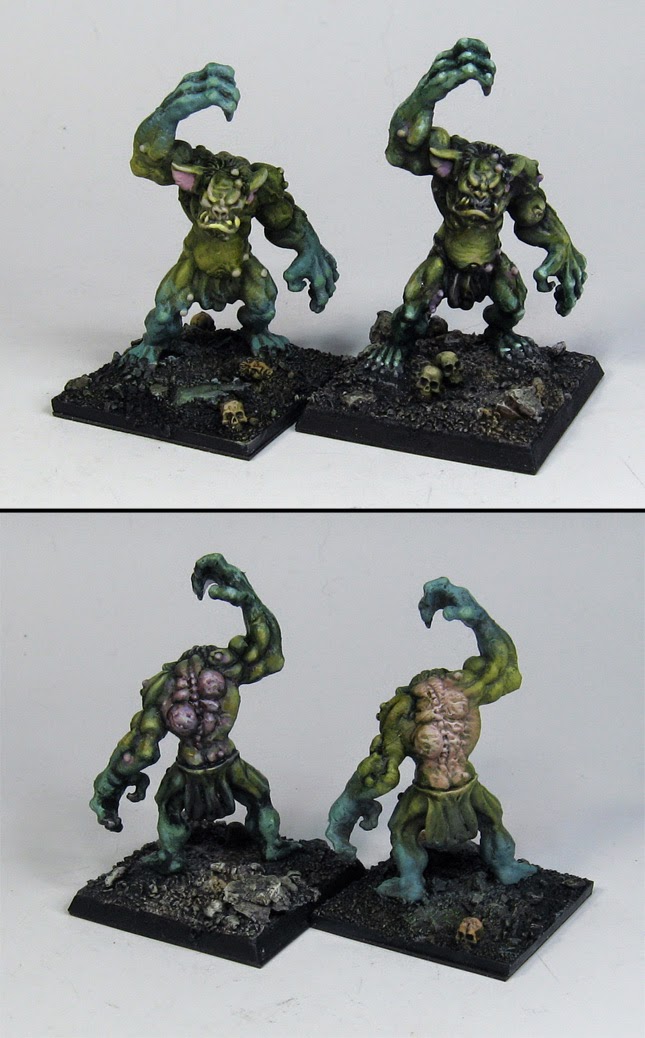 The whole chorus line of trolls!  Start to finish.

Lots of very active painting here... rubbing away glazes with my fingers, a dried brush, or even a paper towel.

So, on to Reapercon!

Posted by wappellious at 2:12 AM No comments: