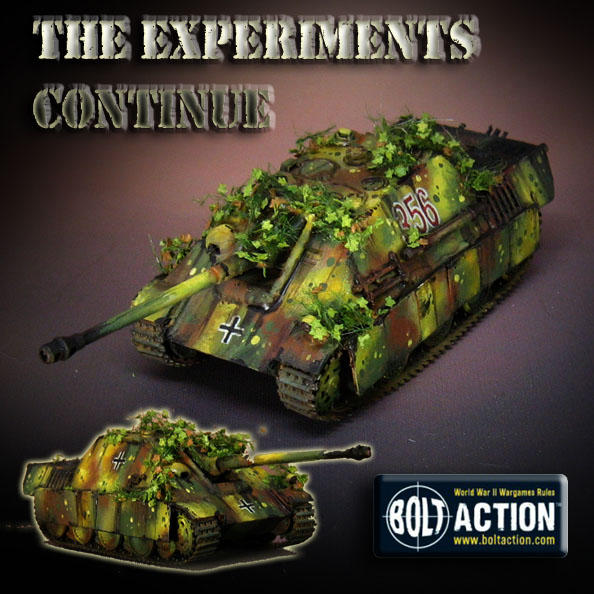 While this is not actually a Bolt Action vehicle, this was an experiment for future German vehicle projects.  This is actually a 20mm, 1/72 scale tank hunter.

I wanted to see how some of my foliage might work in the future on a larger scale vehicle.  I have some Panzer 4's which will get a few different color schemes.

One of these will be a later war type of chia pet scheme.  When I do the "real" tank, there are other types of foliage which I will use on other areas of the tank.  These would be individual leaves that have clustered and piled into areas between the armor skirts, and other horizontal surfaces.

I employed some Secret Weapon weathering powders on this vehicle.  In fact, almost 80% of the surface is covered in them!  I could not find my usual spray on Testors Dullcoate to seal all these pigments, so I had to turn to a last ditch alternative.

I have a few containers of Secret Weapon pigment fixer, which is designed to seal those powders in place.  However, I had only used this material while applying the pigments simultaneously.  In this case, I would be applying it like a wash over the whole thing.  I wasn't sure what would happen... would I literally wipe away the powders that I had been applying, or streak them, etc.?  We would find out.

As it turned out, it went perfectly.  None of the powders were wiped away, and no crazy sheen was created.  Also, the pigment didn't change at all, another concern that I had.

That is a very important piece of knowledge for all the future vehicles and even infantry which I have planned for the future.

The coin next to the vehicle reveals that this tank must be 1/72 scale.  It was one of the toy tanks that I had discovered at Little Wars last month.  I thought it was just the right kind of experimental subject, and it worked out that way.

So, stay tuned for future blog posts on those German Tanks!!