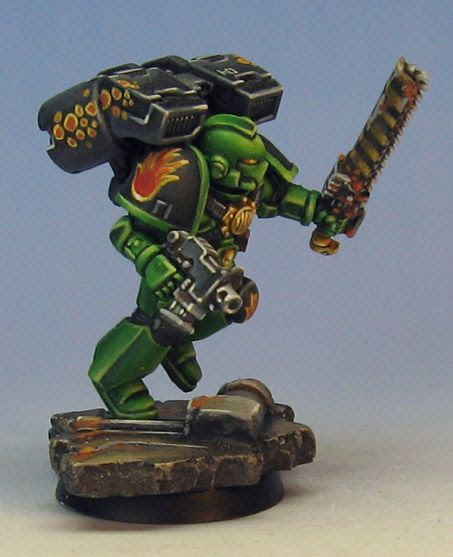 I ran across these images yesterday which had never been processed.  Here they are!

Some of you may recognize the marking from the drop pod and land raider.  It was all part of the same army, done in 2008-9.

Posted by wappellious at 6:10 PM 2 comments: 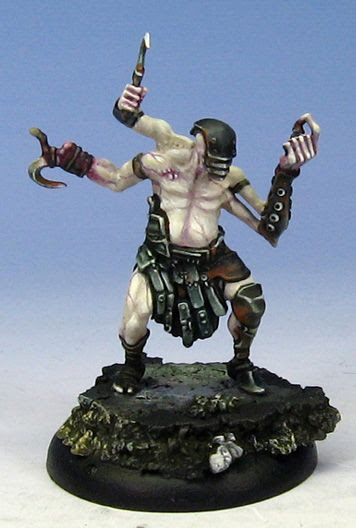 Yesterday the thought was placed in my head about how some of the Dark Age Skarrd miniatures could make some interesting conversions for Dark Eldar.  The Skarrd have loads of blood drenched figures, with lots of crazy stuff grafter onto them.

If this had a weapon attached to an arm, it could almost be a Wrack. 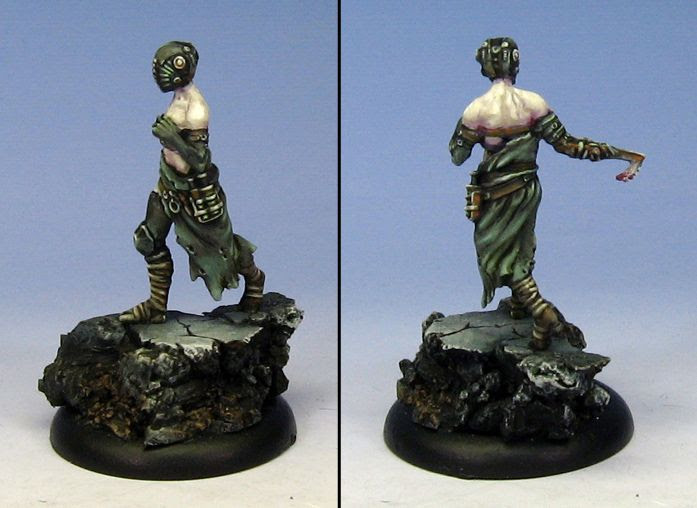 Could this be a Homunculus with some add ons? 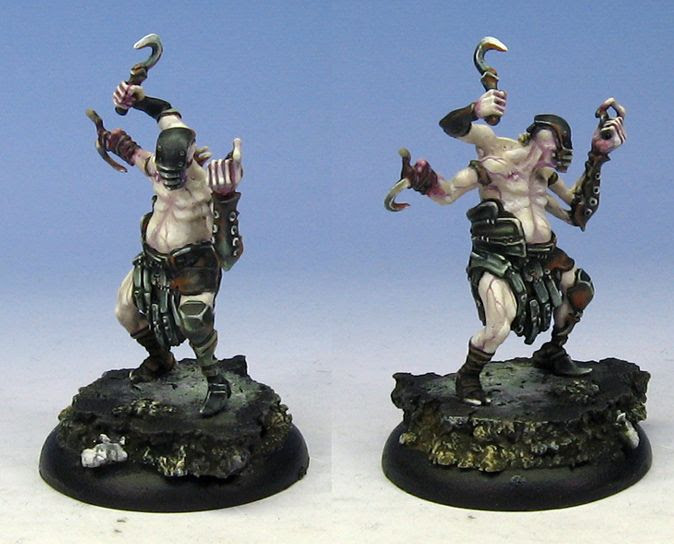 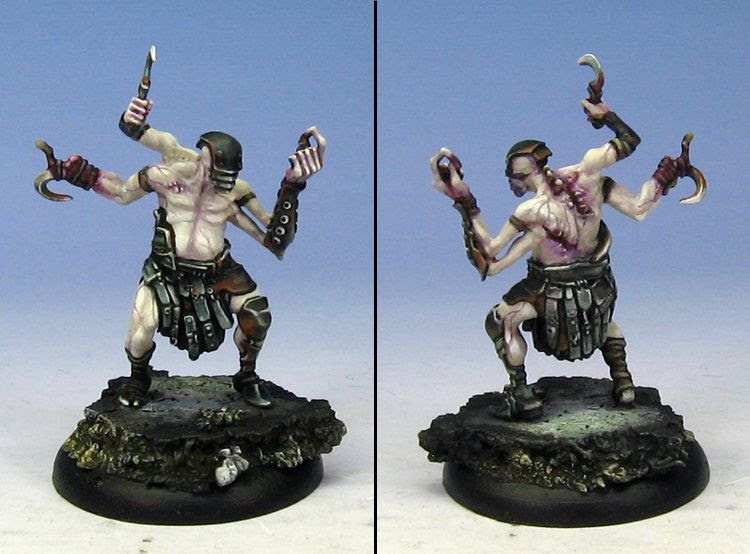 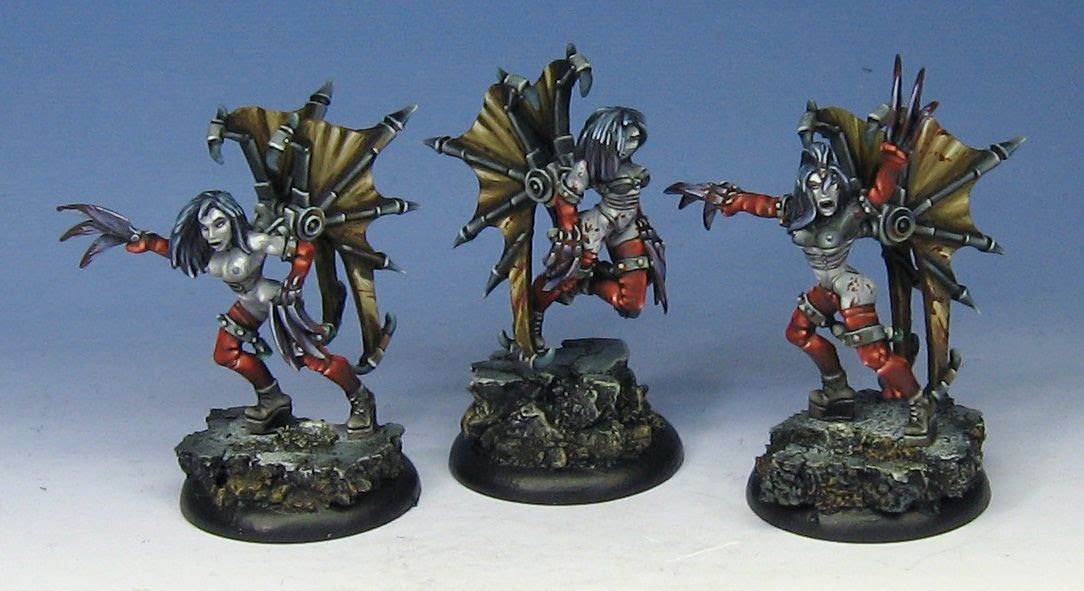 Posted by wappellious at 12:58 PM No comments:

Figuring out scenarios for LOTR, not as bad as we thought? 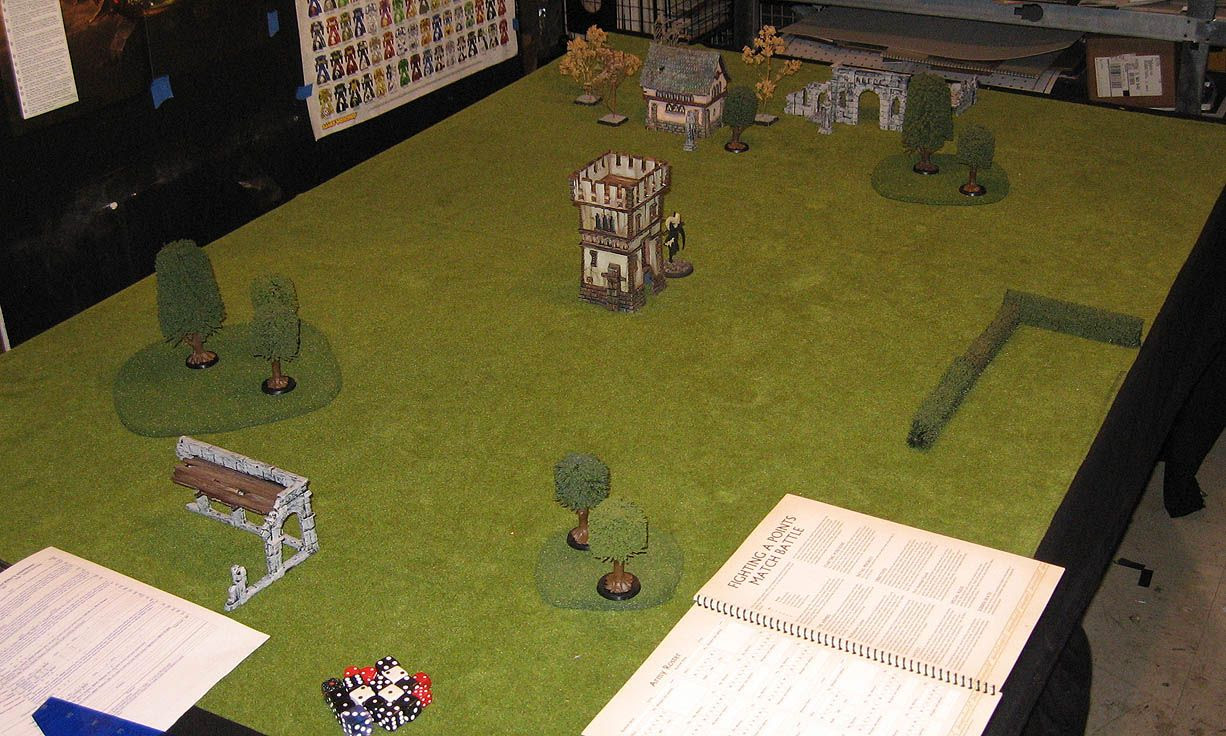 Since my LOTR tournament is not all that far off, Rich and I decided that it was time to start practicing for it!  It is not an easy transition, for a few reasons.

First, we are used to playing larger games (at least 1000 points), in a campaign style setting.  This tournament is 600 points each of good and evil.  My Evil army of Khand/Easterling has been tried out many time, but never at this small of a point total.  My Good army is the Elf/Army of the Dead alliance, which has not been tested as much.

Second, we had refrained from using the new scenarios, as we had some major concerns.  Knowing what the 8th edition Warhammer scenarios did to the game (and unit synergy), I was really worried that a few unfortunate rolls of the dice during the deployment could lose a game before  it started.  This has happend with WFB, especially with a synergy army like Tomb Kings.  Did we really want to invest those hours into a game where my opponent's main unit did not show up, or was baniched to a corner because they could not roll higher than a 3?

Also, we liked the build up of the first few turns as each force jocked for position like two prize fighters looking for the advantage.  Some of the scenarios seemed designed to have both armies charging each other on the first turn!

The first scenario we played last week was Hold Ground, which ended in a draw between the Elf/AoD vs Rich's Orcs lead by Gothmog.  There was some whacky stuff in deployment, but not the sort of tradgedy we anticipated.  It did create an interesting game overall.  We both had to get used to the idea that breaking the opponnent's army was not the only goal, and could even be a bad thing.

This time around, it was Domination.

Here is the borad set up: 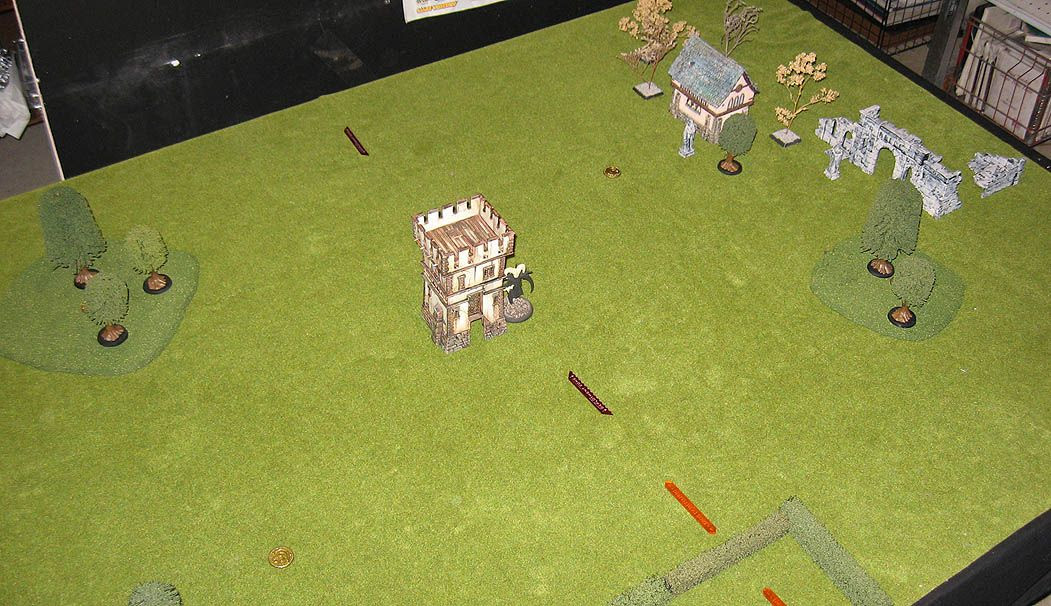 This will not be a battle report, so much as an analysis of how these new scenarios affect the game as we saw it.

I had to deploy first, and I rolled a 1, so a unit had to go up close to the center.  I decided to force the issue and put a unit right on top of the center objectuve.

Rich had a similar roll, and put his archers on top of the tower.  We each rolled some 4+ on warbands, and we covered one objective each in the rear.  Rich put Legolas in the building as well, while my chariots and cavalry went in a mob by the priest.  I wanted to be near that war drum!

Here's another view.  We learned that a 4+ means you can go ANYWHERE, and not only in the rear part of the delpoyment zone. 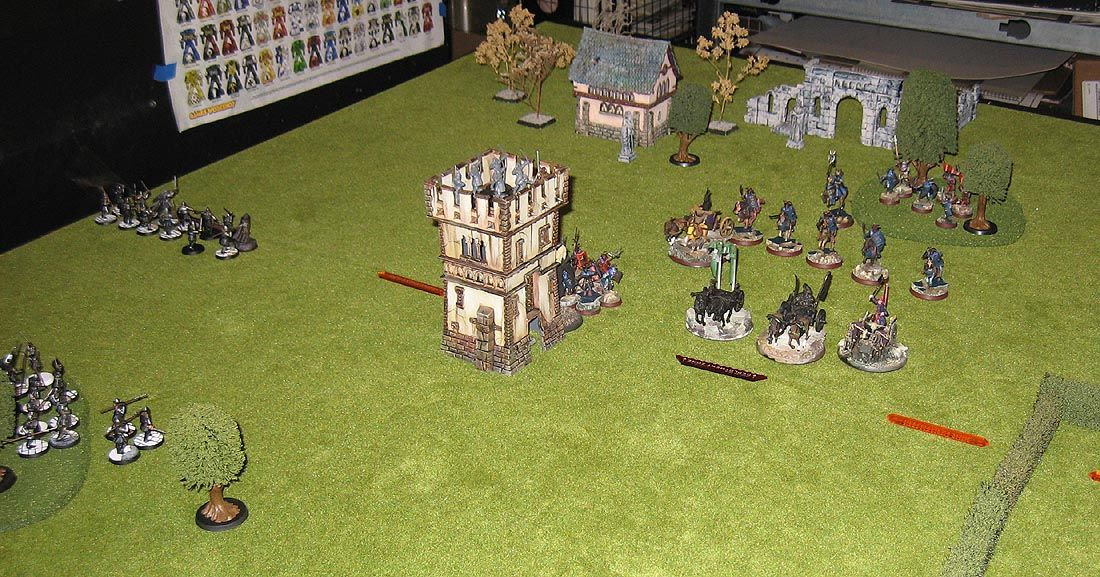 Rich got the priority for turn one (which he would get for 5 of 7 turns, BTW!), which made me do something I never have, and certainly would not have considered in our own standard scenarios.  I used a point of might to get my units in a better position.  I wanted to get the Fury going, and get use of the war drum before it was shot down by all the archers sitting in that building! 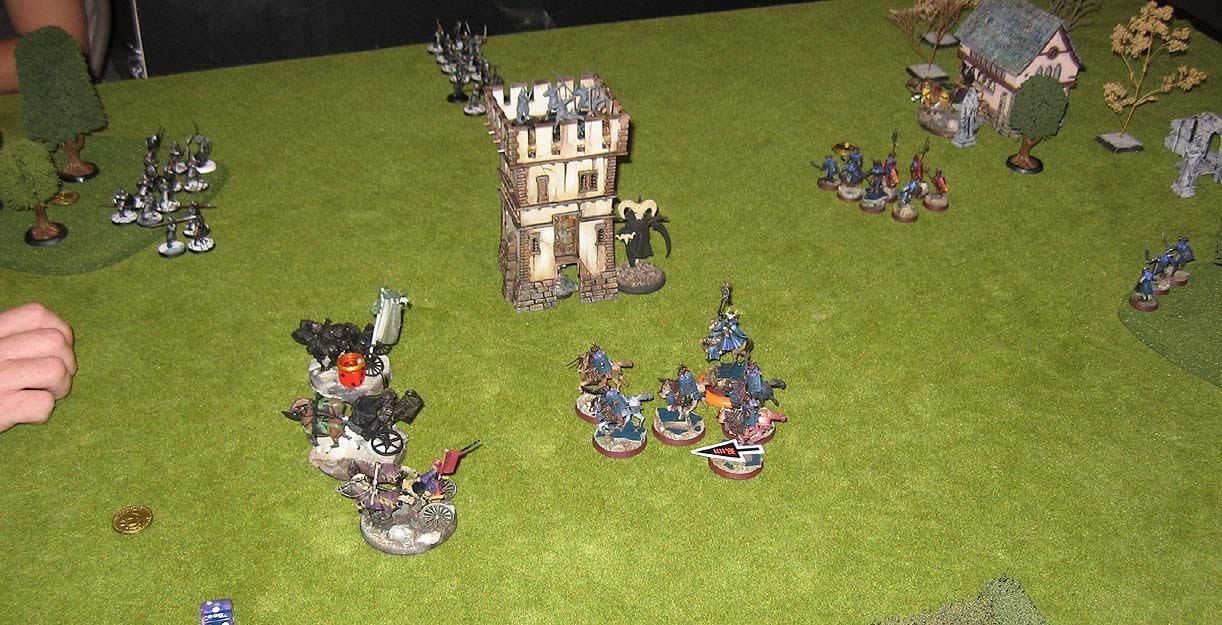 I also ran as many foot troops as I could to the other objective in the rear, using the +3 movement from the war drum on my foot troops. 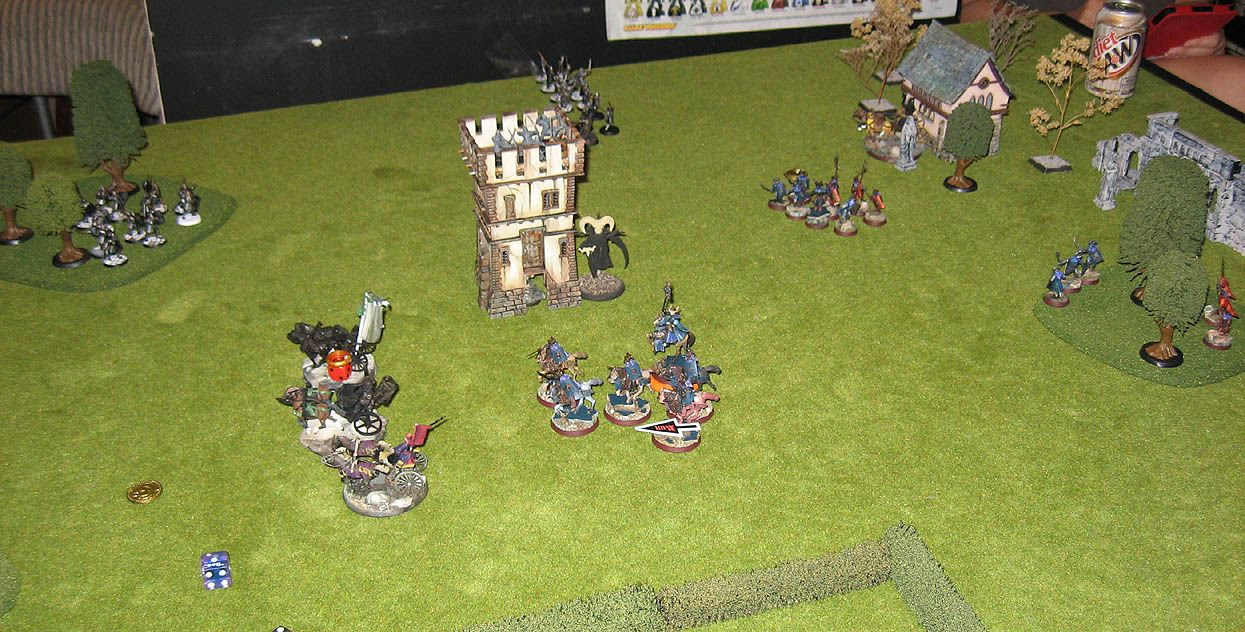 Here's my racing teams flying past the tower... 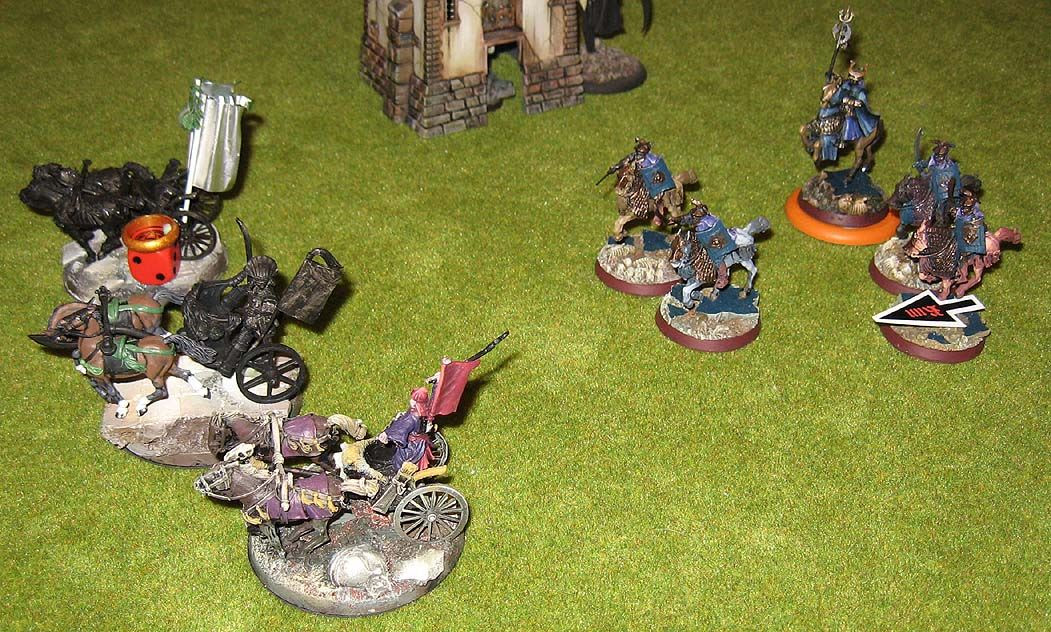 At this point, Legolas popped out from the building, since my unit of foot troops by the tower had also headed over to the rear objective.  I promptly sent the Khandish King and a buddy over there to say "Hi".  Yes, there is a King... he must be wearing the Ring!. 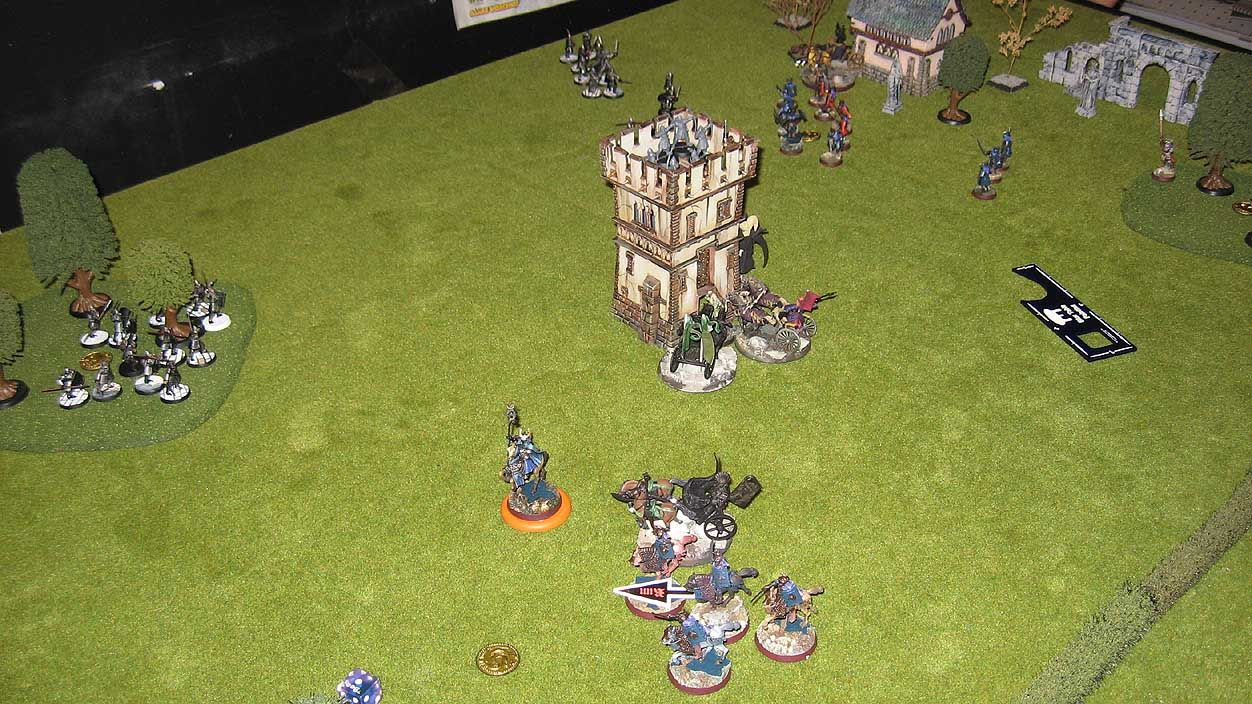 After one round of combat, (and spending tons of might) Legolas became yet another trophy head for the King's chariot, joining Gandalf, Aragorn and many Gondy captains. :-) 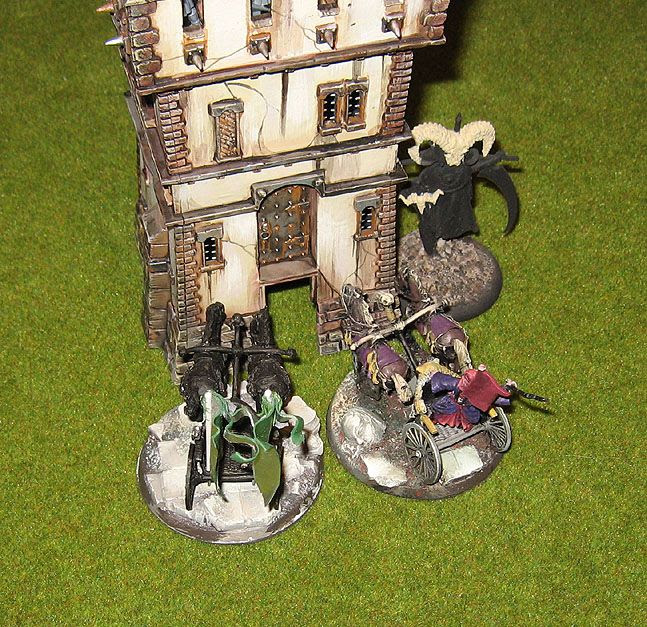 By the way, on this same turn Denethor went Bonkers, and he had to spend might to get himself in a more upbeat mood... 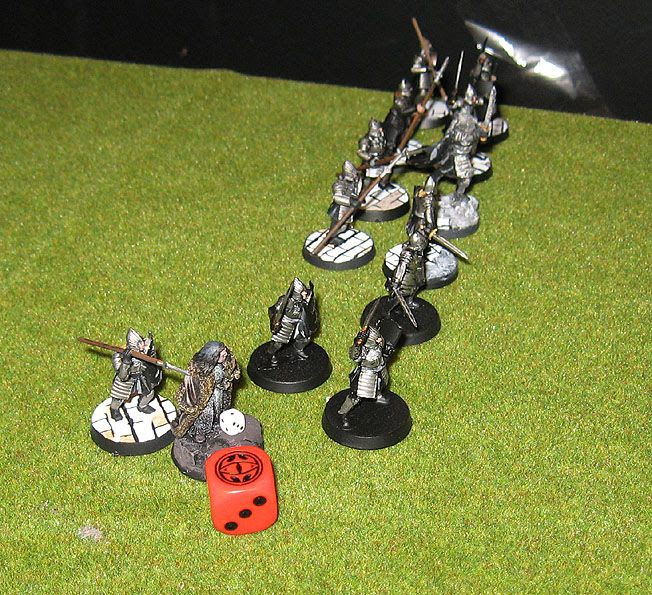 Not long after, the stuff I had sent to that rear objective came into contact with the Gondor unit that was lead by Faramir... Denethor tagging along... 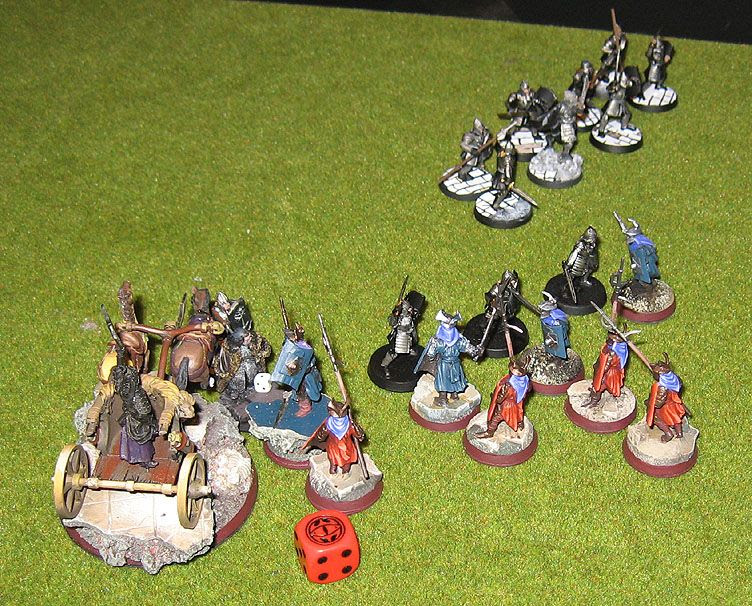 This view shows the whole board.  Every objective is covered by somebody, or being contested.  The archers kept shooting and mostly missing at my unengaged troops, including those on objectives.

Fortunately, I had moved my war priest and some chariots (including the King) over towards the combat on the rear objective.  I was hoping to outnumber him over there, and maybe get some points for wounding or killing Faramir.  I lost almost all the priority rolls, so I had to waste a lot of might just to stay alive! 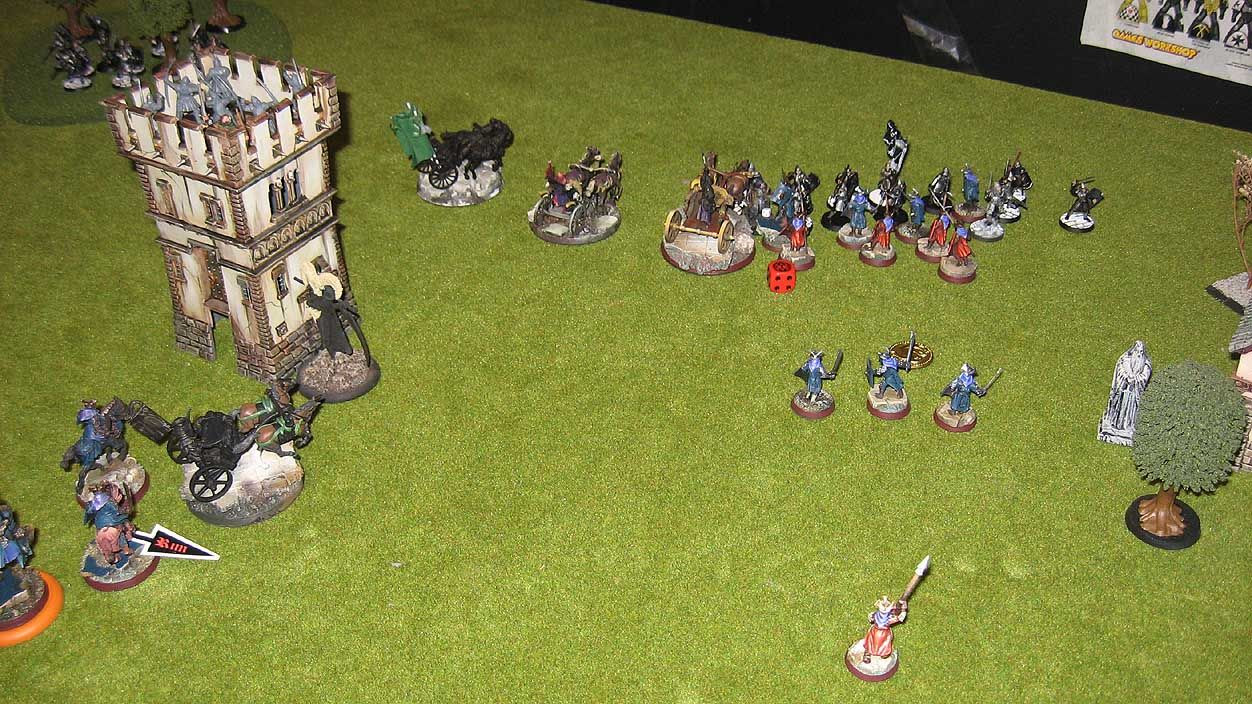 I had to do mostly shielding moves to stay alive until the reinforcements showed up!!

Now you see that combat start to come to a head.  Eventually, I was able to get the numbers, with the King killing Denethor (another trophy head!), and then Faramir (more heads!). The action in the rear of the Gondor deployment zone did not go as well.  I ended up being trapped with the continual loss of priority.  Between combat and shooting, the cavalry and chariots I sent over there were wiped out. 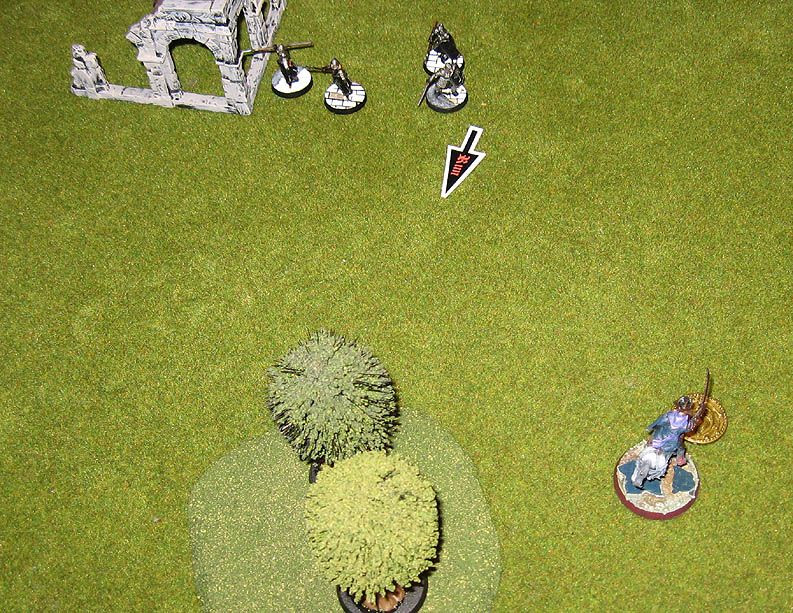 However, I was able to get the Gondor army to break, and they started to skedaddle in critical areas.  I discovered that it was possible to "daisy chain" courage via a priest with Fury, which is cool!  That allowed me to hold enough objectives so that when the end came (Gondor below 25%), the loss of Faramir was enough to give the True Believers of Sauron a 3 point victory! 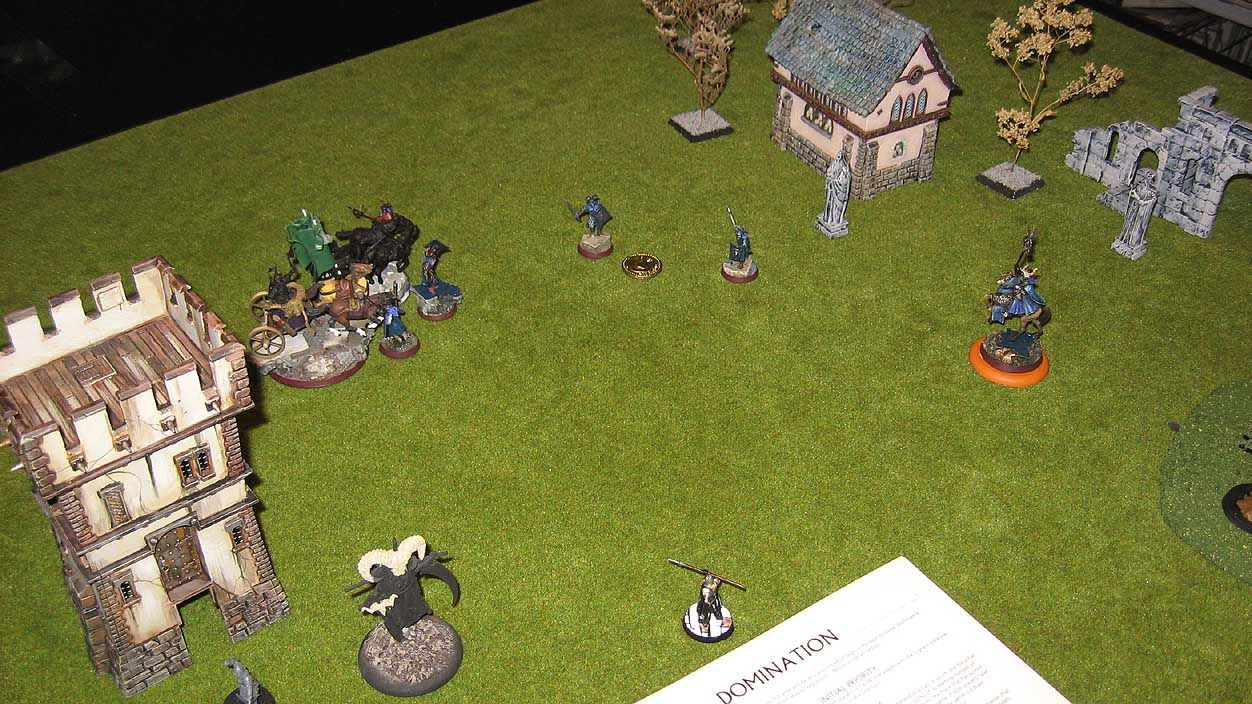 The co-MVP's for the game obviously had to be the King and the Priest!  In the end, the synergy of my typical Easterling/Khand army held together, even at the lower point level and the scenario which can fool around with your deployment.

This was the first game I had not had my nasty Easterling heroes (or Saruman), so I had no idea what might happen.  Rich and I are both starting to believe that the scenarios have merit!

Stay tuned for more!
Posted by wappellious at 4:49 AM No comments: