The other scratch build with a little bit of painting 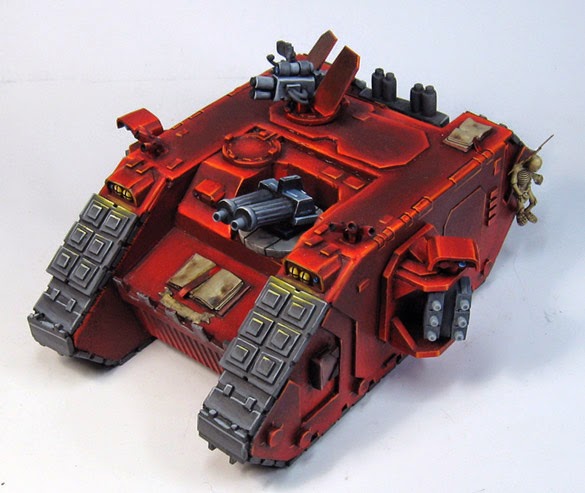 Yet another painting work in  progress.  This one is barely 40% painted.  Lots to do on it, but you get the idea! 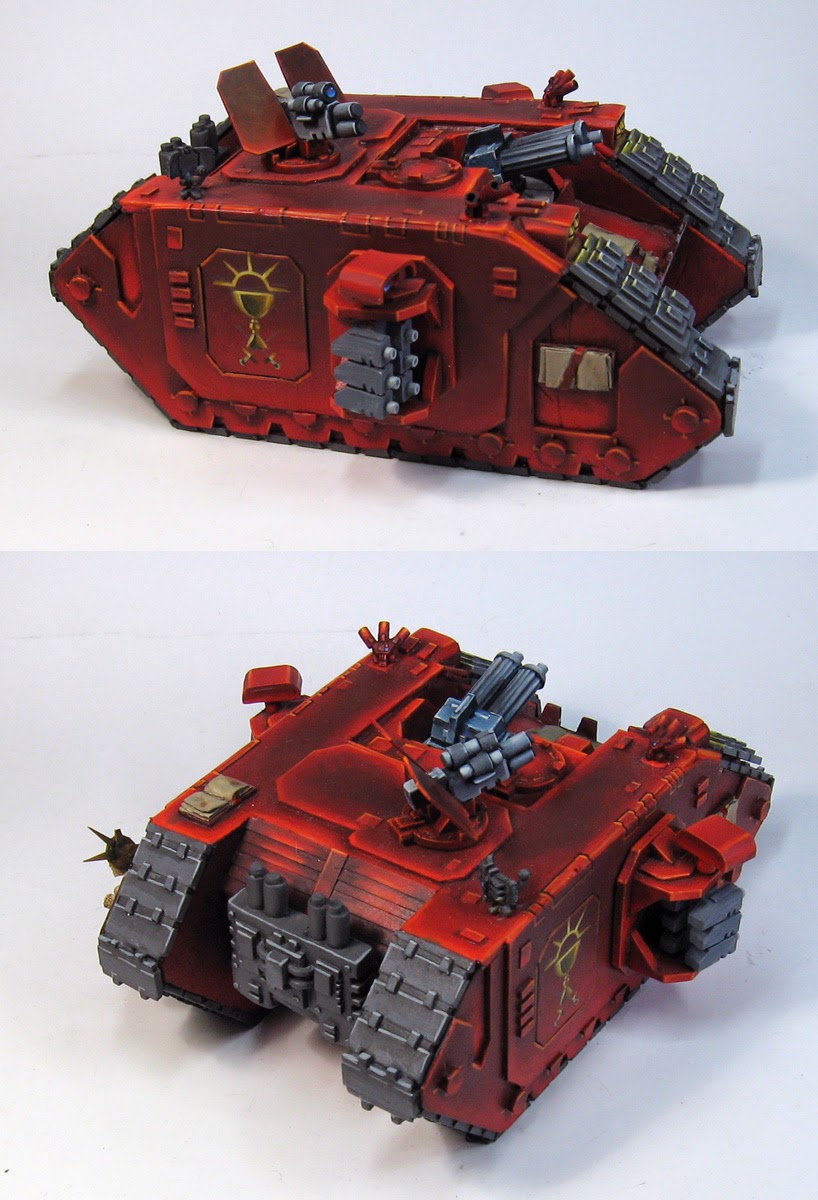 This was for the beloved Demonhunter army, which was all done in these bloody reds.  You can see the rest of that army in the Demonhunters section, and read all about the Brotherhood of the Sacred Chalice. 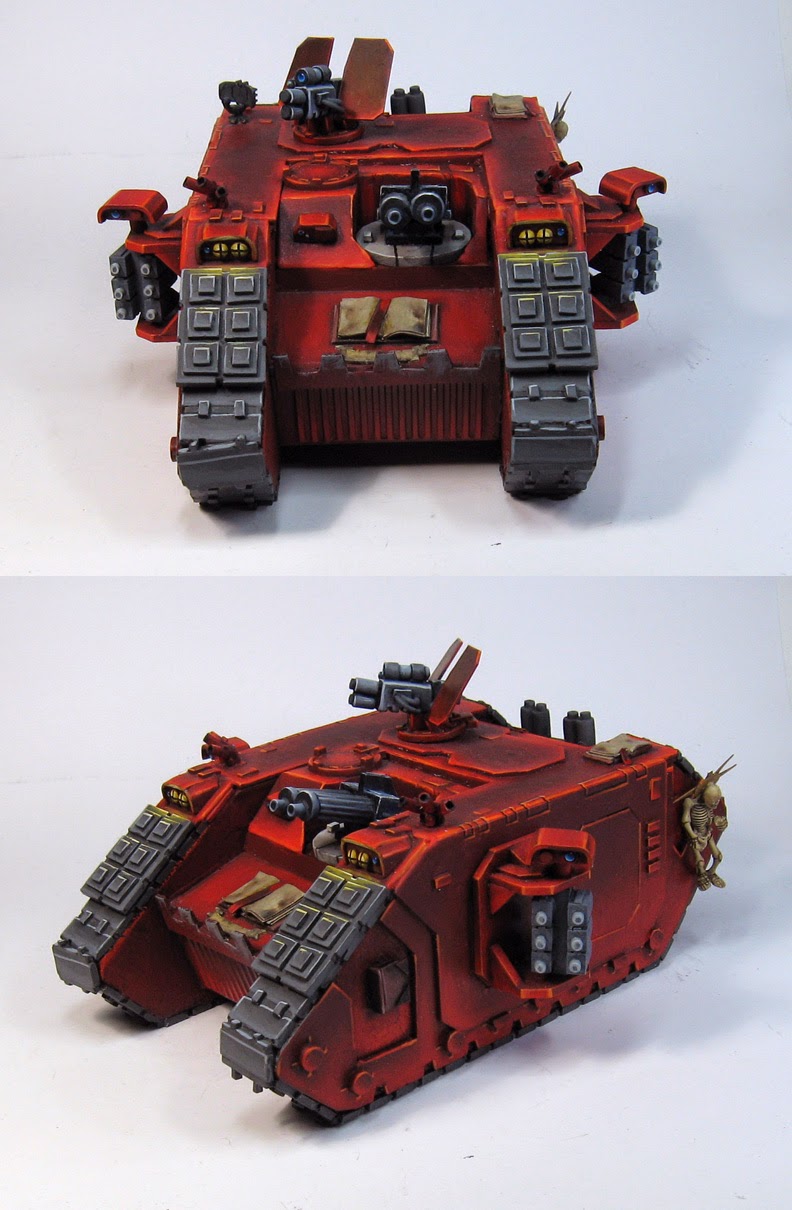 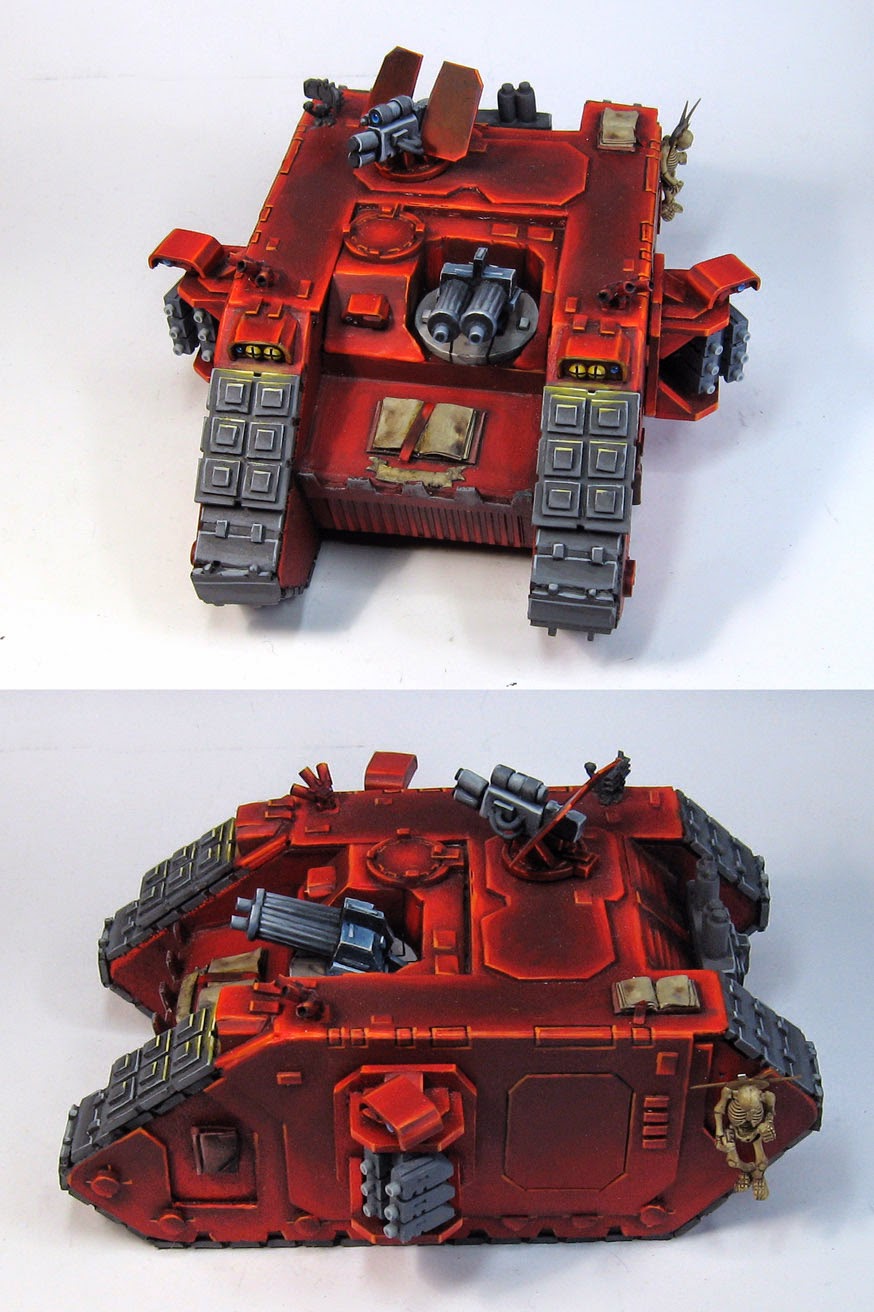 The Assault cannons were actually made from plastic wall hangers! 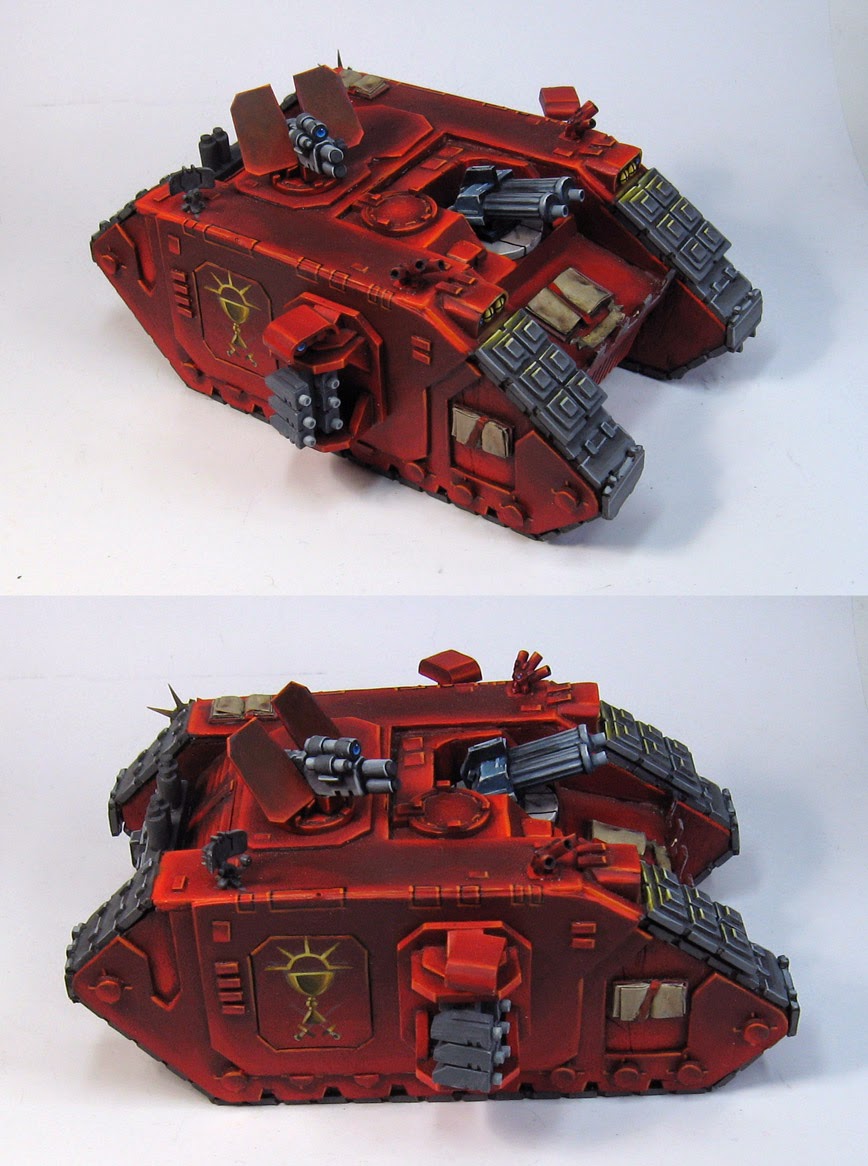 All the rest was done in pink foam, matboard, and sculpey.

More to come as I continue the process on these guys! 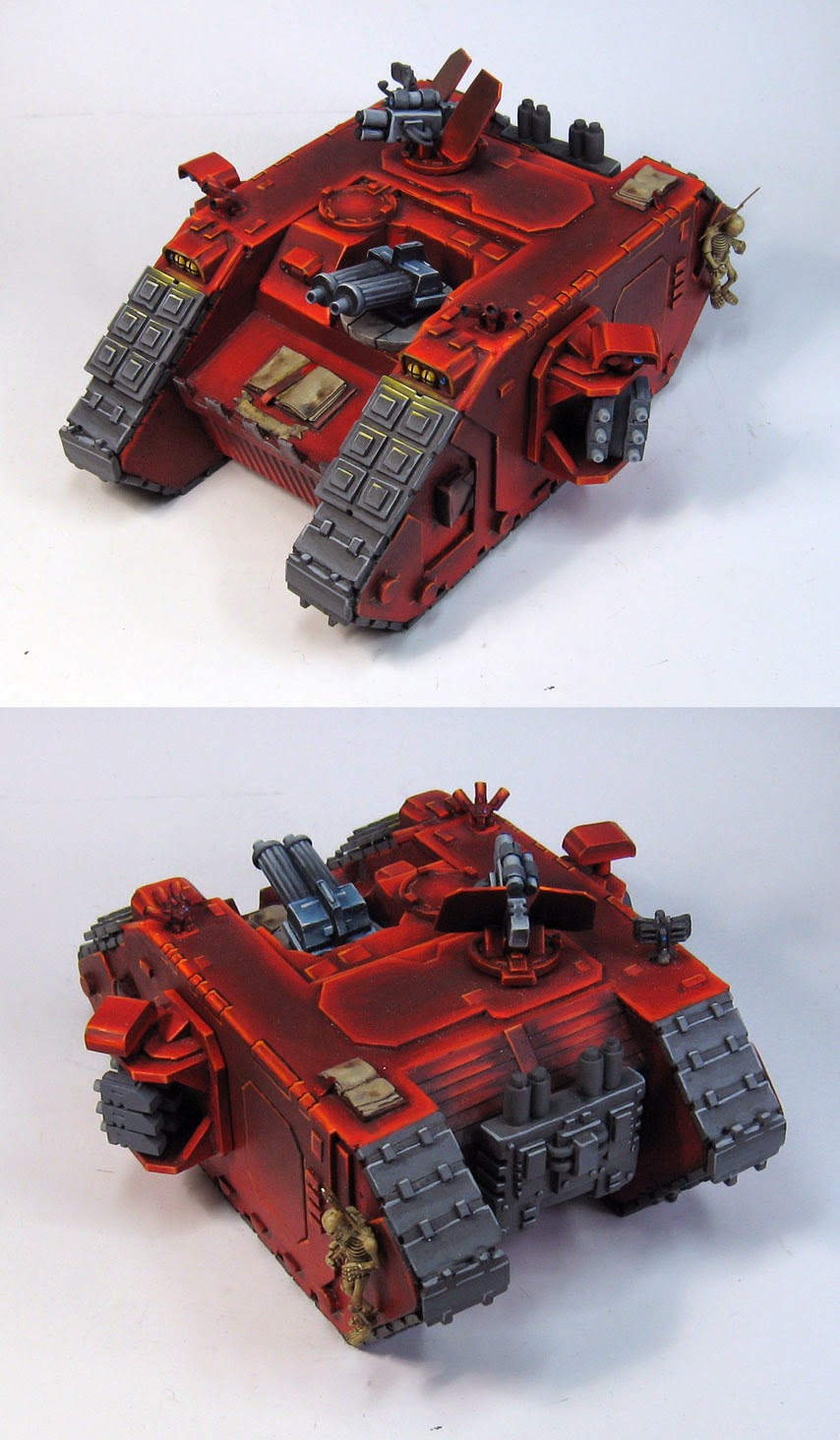 Putting a hex on your minis 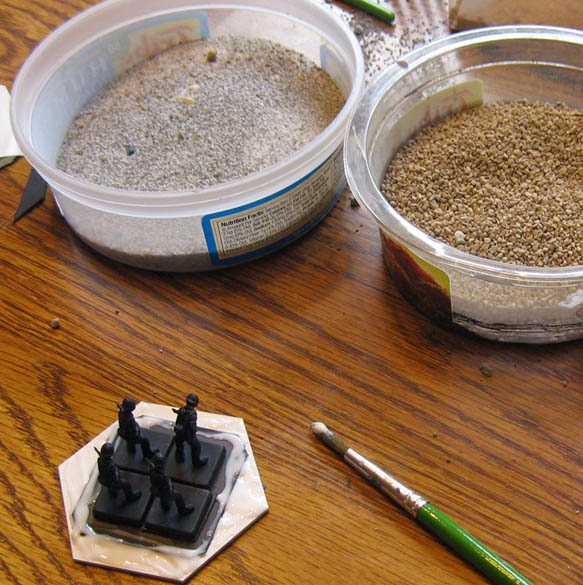 Or is that minis on a hex?

Anyway, this is the next stage in developing the stands of Memoir '44 miniatures... the infantry in particular.

Just like Warhammer Fantasy, set up can take a while, since each infantry unit has four figures.  When you have the average 7-9 units to pull out of the box each time, you start to get bored placing all those figures.

So, I figured we would do the same thing that I do with my WFB units.  They are all magnetized on the movement trays, which are in turn magnetized to the container.

Thus, set up is little more than pulling the movement tray out of the box and placing it on the board!

Fortunately, I have many scraps of matboard around, and it is the same thickness as the terrain hexes.  I traced them out onto the matboard... 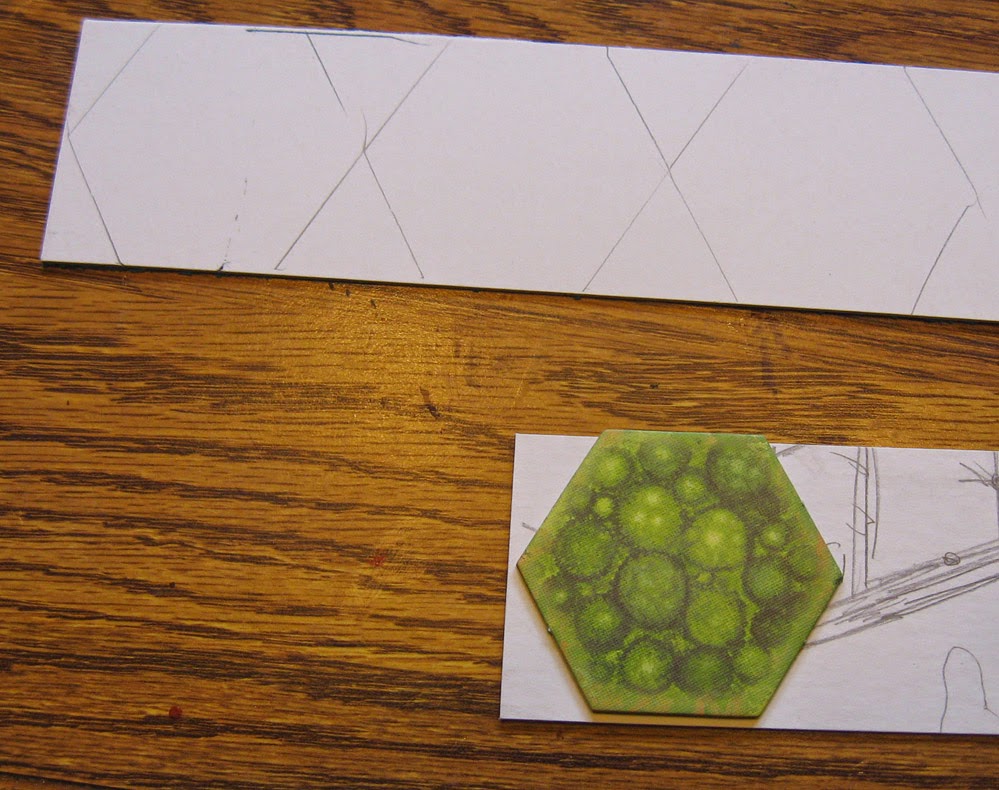 And brought out the sand and gravel! 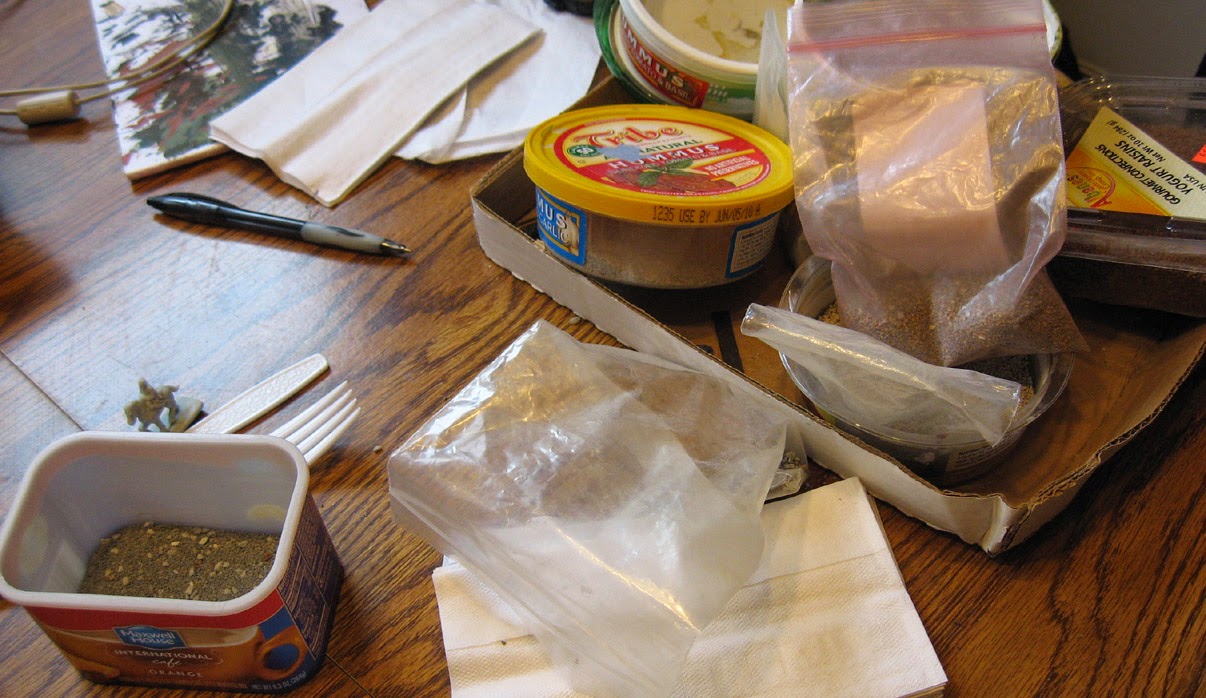 Time to do some cutting.  The metal ruler and some cork comes in very handy! 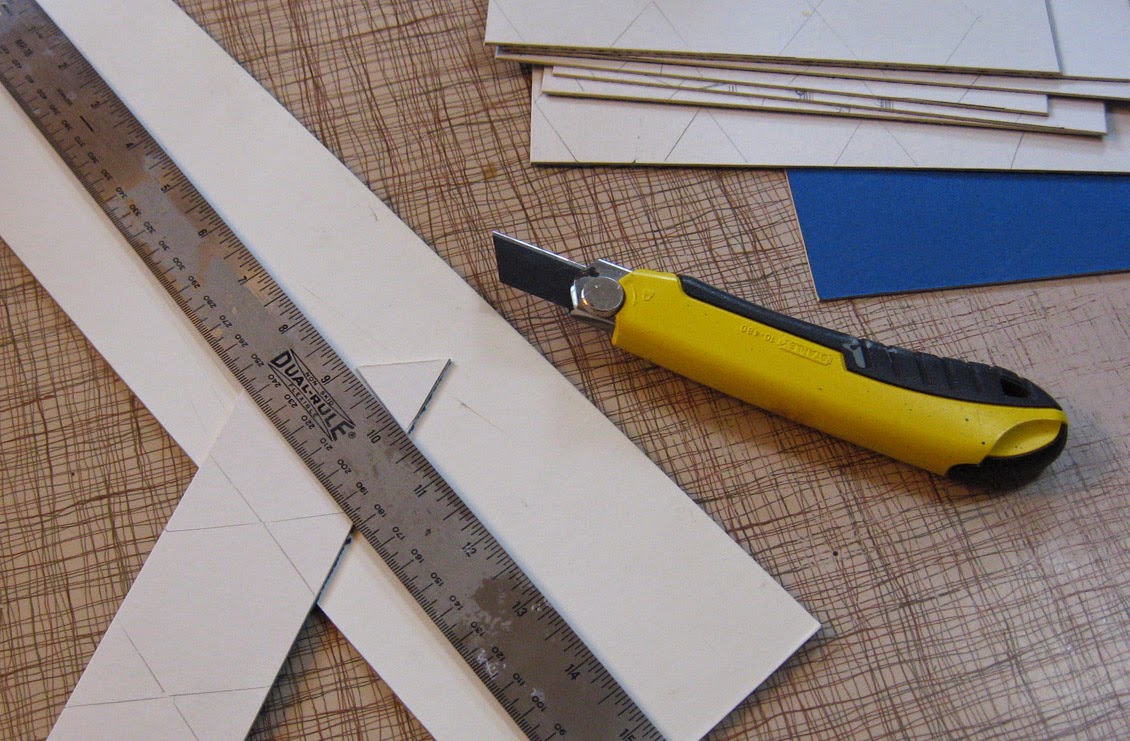 We have a pile of hexes, all ready for units. 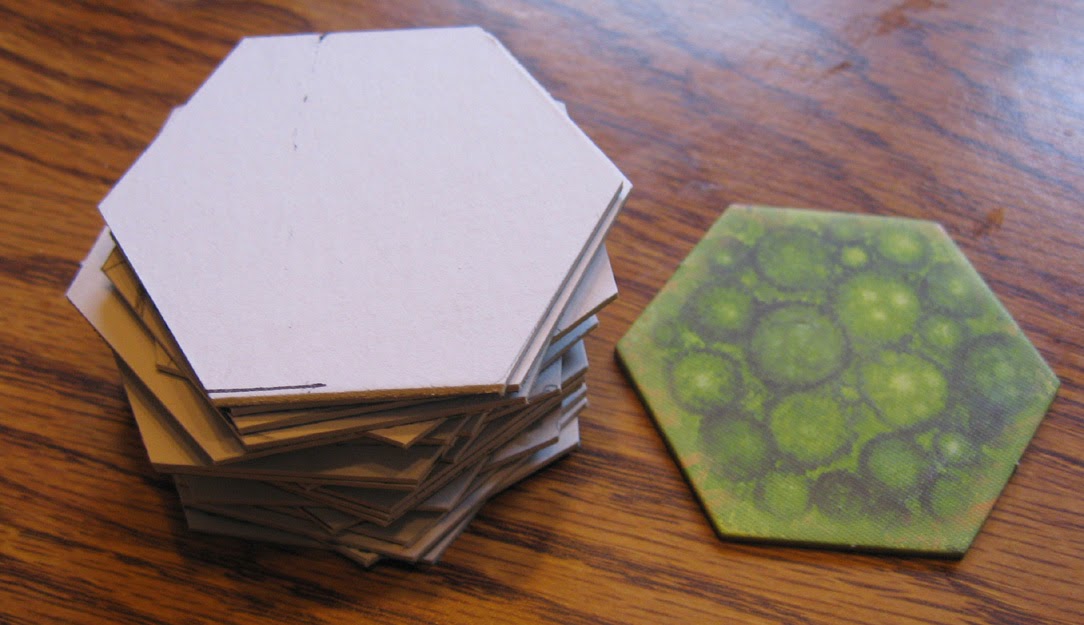 The magnets are self adhesive, so I went directly to gluing on the rocks. 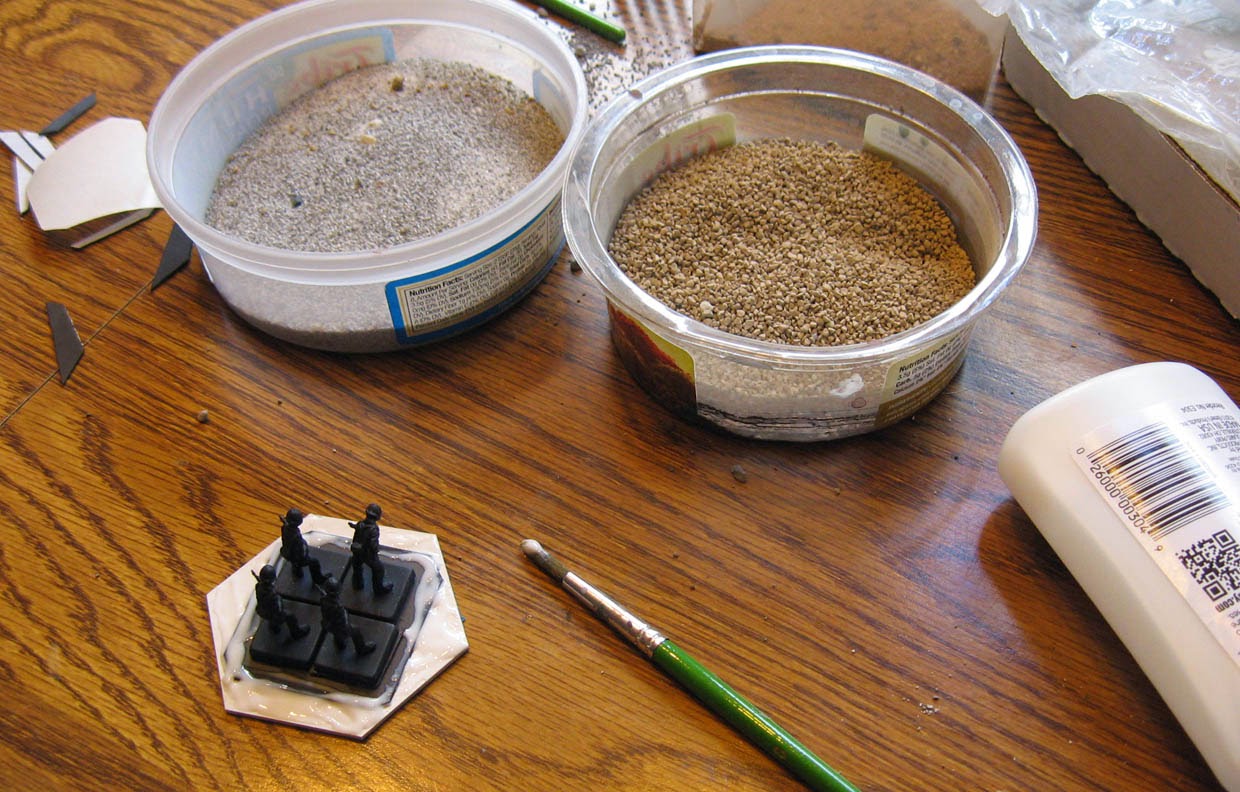 I had to forgo some of my heavier rocks, due to the tiny size of the figures. 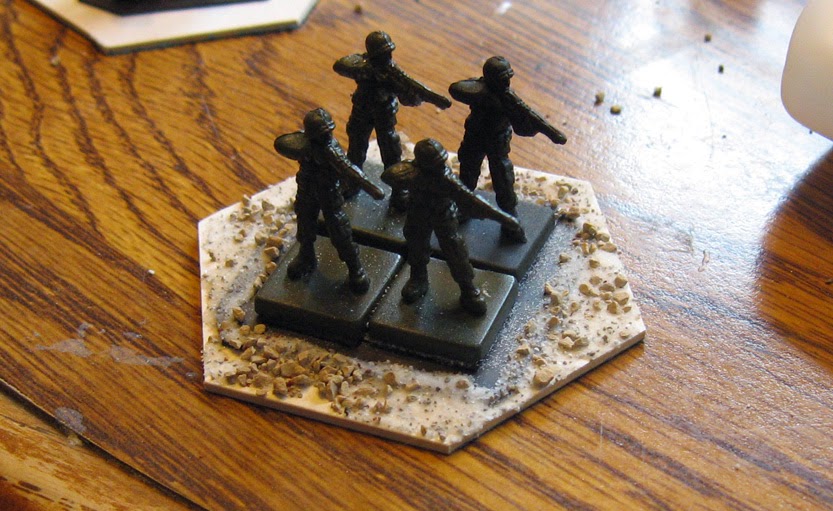 It didn't take long to get the whole batch covered in gravel!

We wanted to test and see what the rocks and sand would look like on the figures themselves...

And it seemed to be very cool! 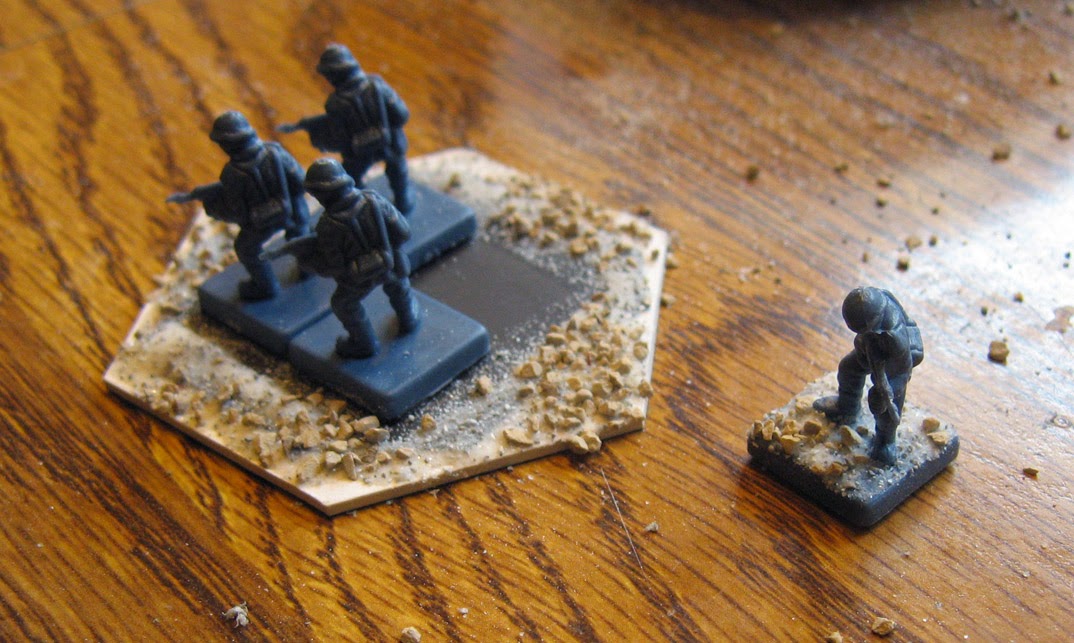 On future stands, I will add extras such as road signs and other elements.  There will be further posts showing what these look like painted, and with flock, grass, foliage, etc., added.  Stay tuned!!!! 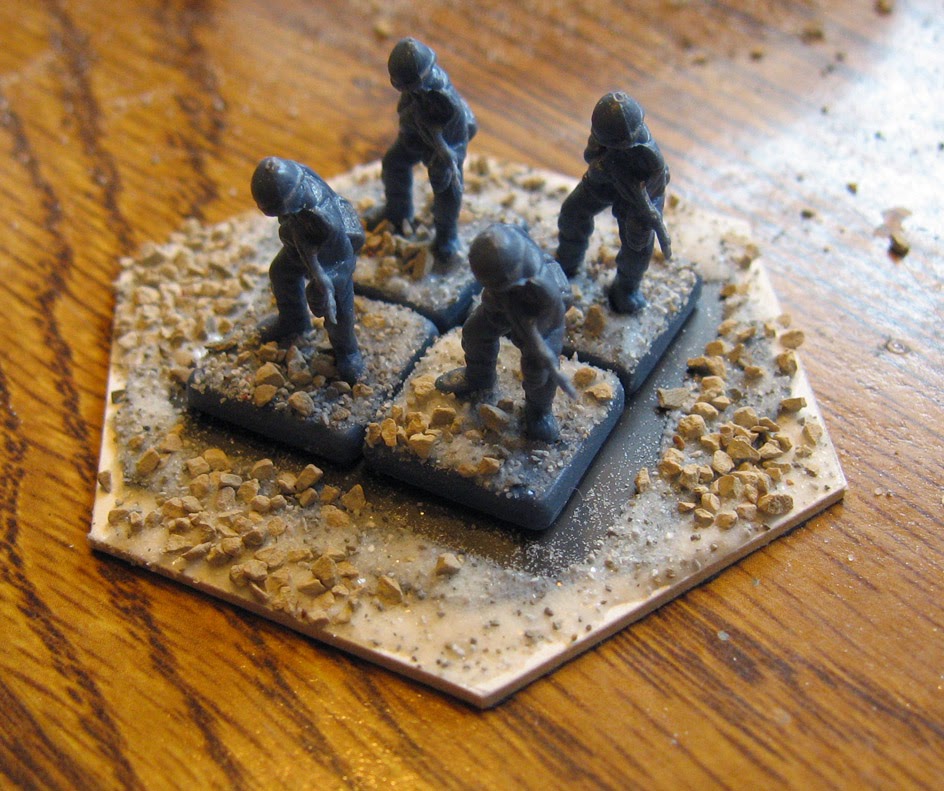 Posted by wappellious at 2:22 AM 2 comments: